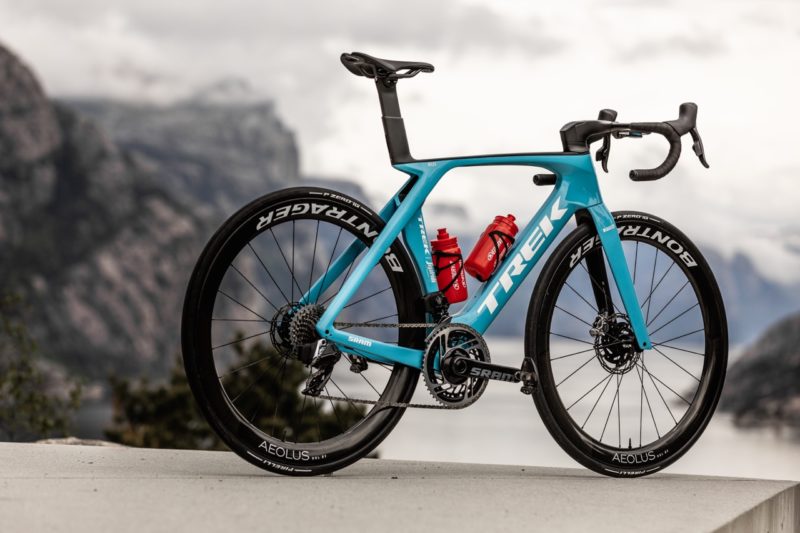 At this point, if you’ve been paying attention you’ve probably already caught a glimpse of the new Madone SLR. Trek hasn’t exactly been hiding it from view, but now it’s official. To make the lightest Madone yet, Trek followed input from their top racers to redesign the IsoSpeed system to make the bike lighter – while simultaneously making it more aero and maintaining the ride comfort as well. 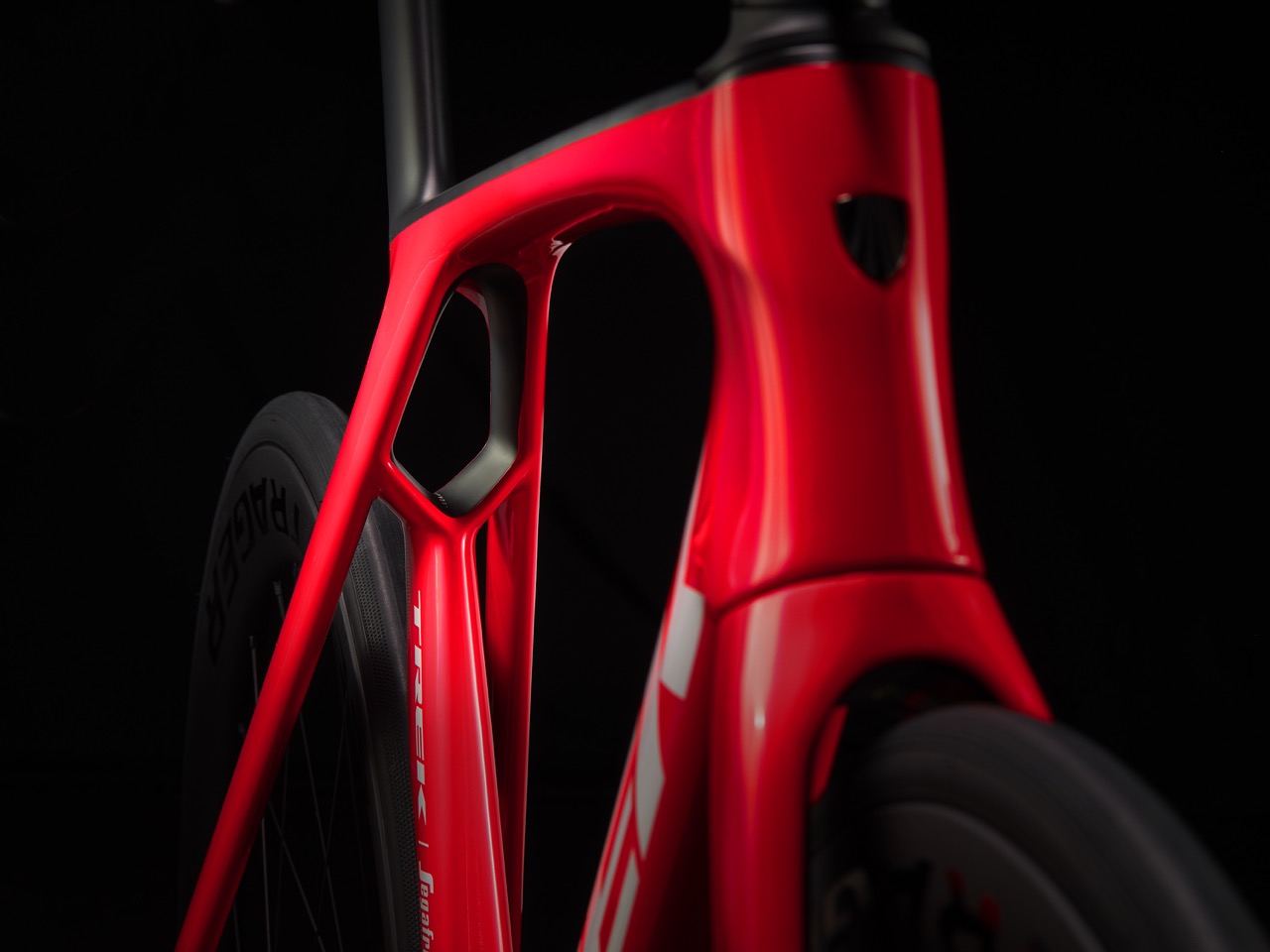 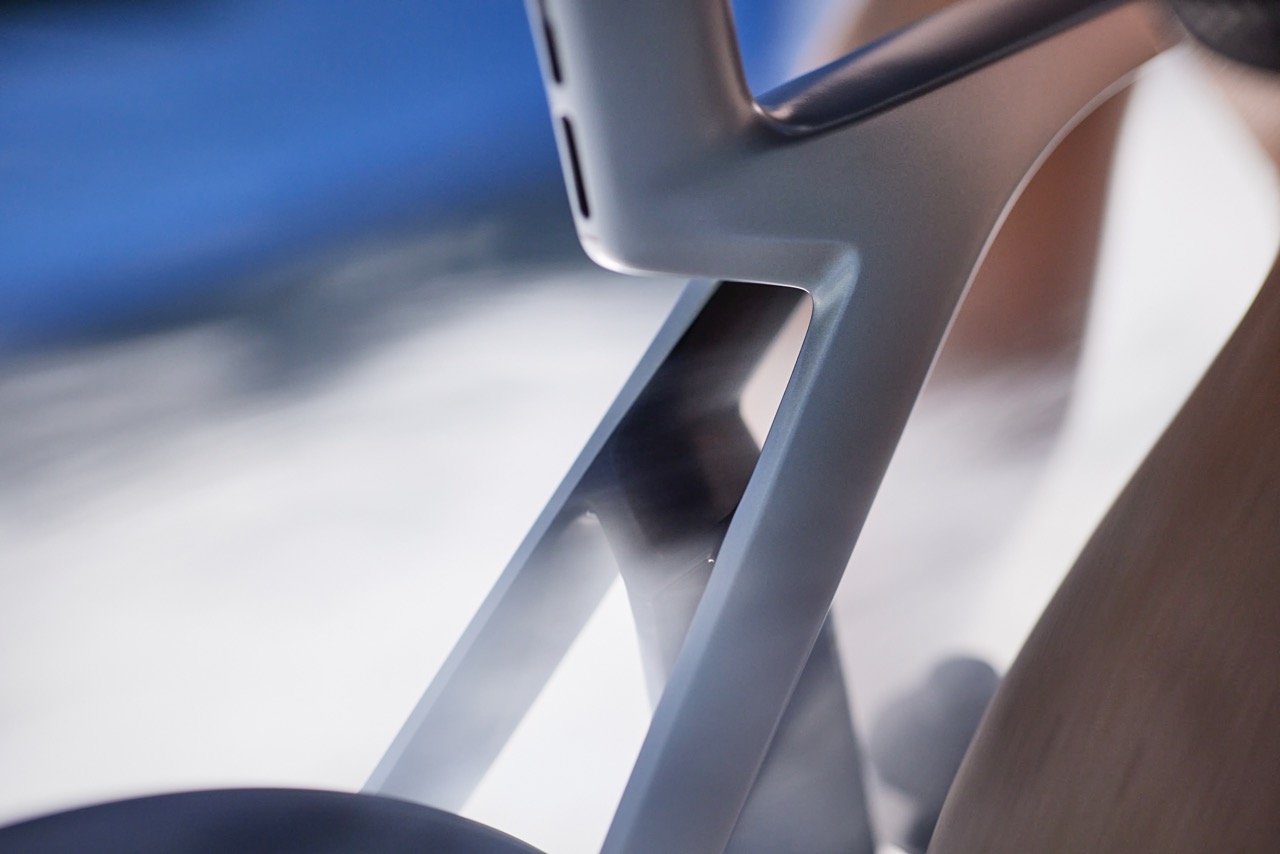 Looking at the back of the bike, it’s clear that the new frame is different. The adjustable IsoSpeed system is gone in favor of a wild-looking seat tube junction with a large hole in the middle. 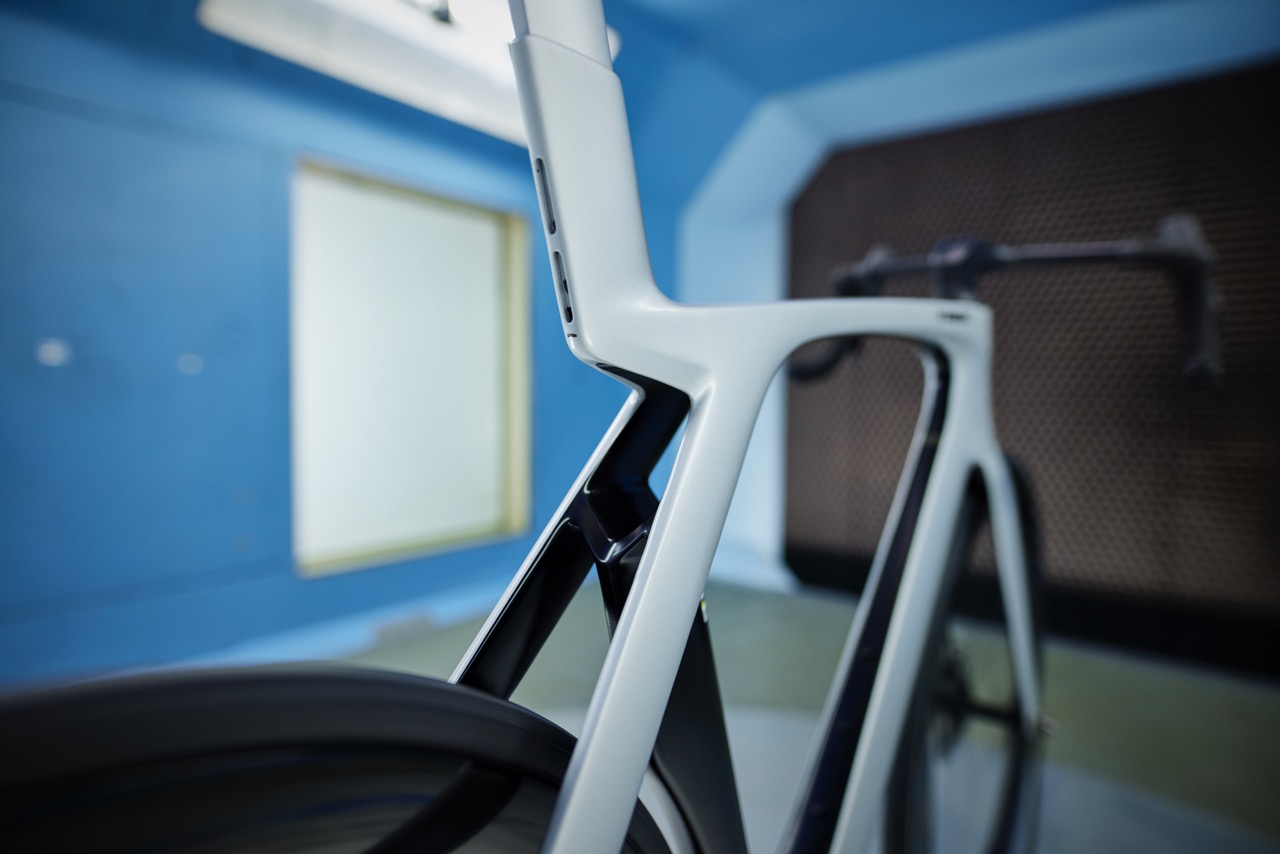 This also results in a seat tube that is cantilevered out from the top tube. Combined with the IsoFlow design below, this is said to provide much of the vertical compliance of the original IsoSpeed system, but in a lighter design and without any moving parts. Trek claims the new bike is almost 300g lighter than the previous Madone. 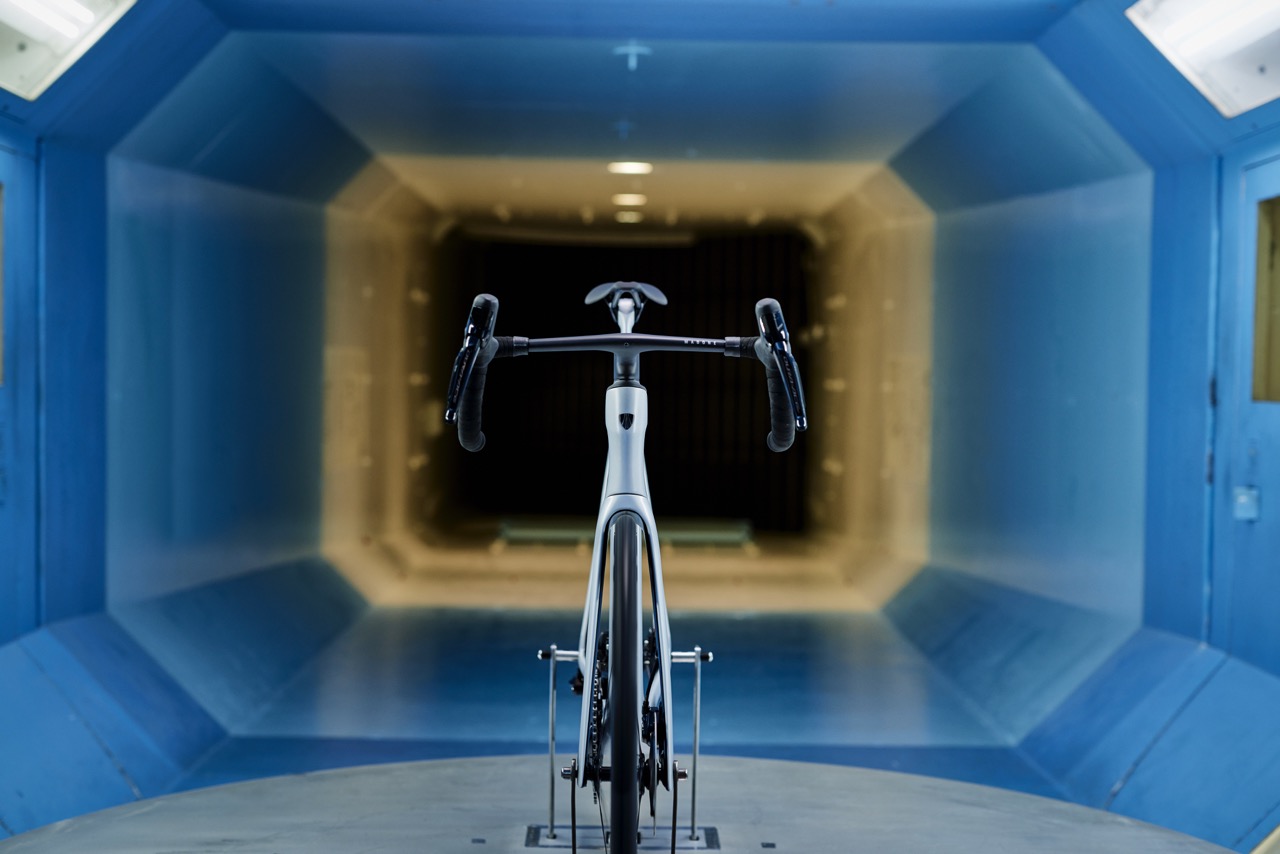 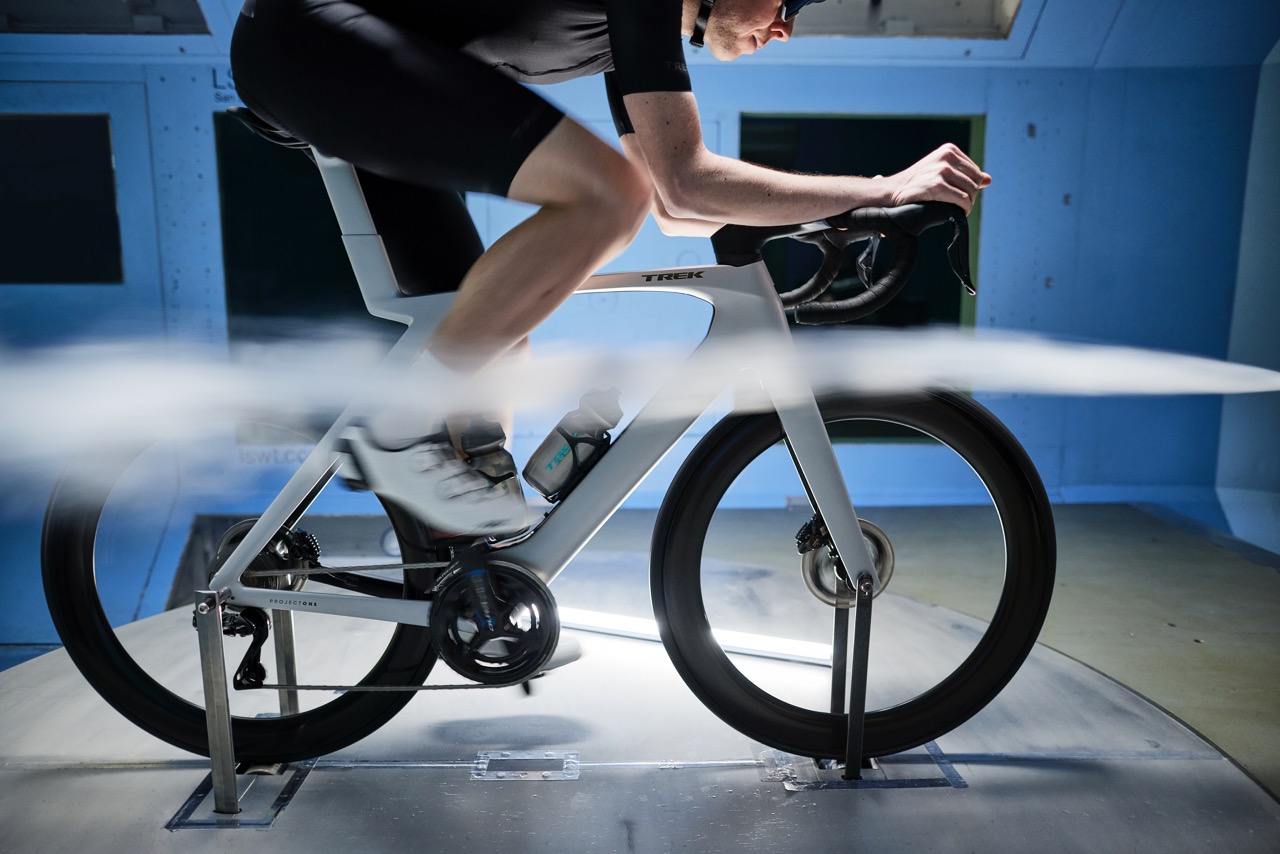 The IsoFlow design combines with refined Kammtail shaping for the frame tubes, and a new bar/stem combo to make the entire package more aerodynamic. The result is a claimed 19 watts saved, or roughly 60 seconds per hour faster than the previous-gen 6 Madone when measured at 45km/h. As Trek tells it, of those 19 watts saved, 9.3w from come from the bike itself, while 9.7w stem from position change of the rider thanks to the new bar/stem. 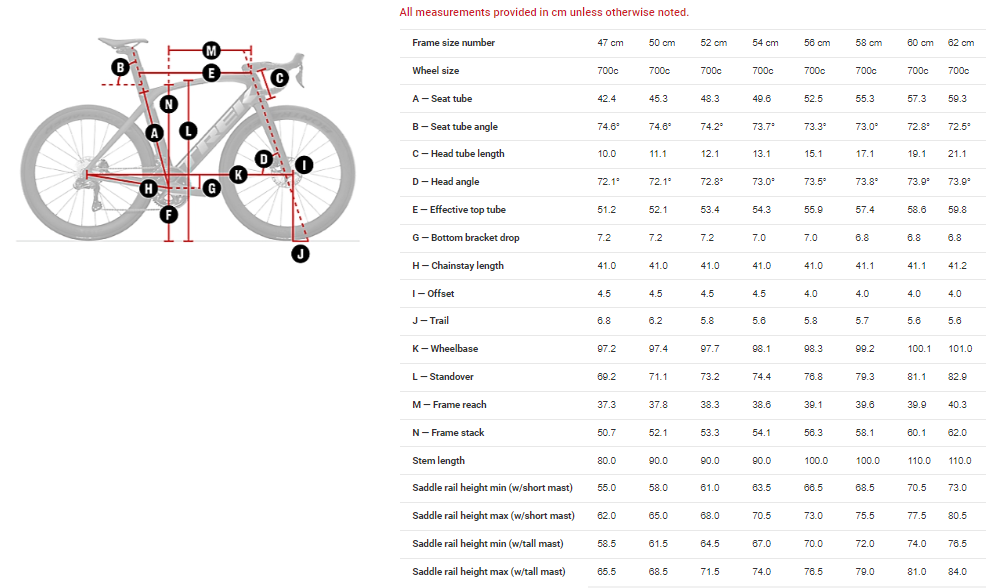 Built around Trek’s H1.5 geometry, the Madone is aggressive enough for pro-Tour riders, but can also be fit for the average cyclist. Obviously, the new seat tube design will somewhat limit saddle height, so there are two different seat masts, Tall and Short. The geometry chart above shows the minimum and maximum saddle rail height with both options for every size. Bike sizes 47-54 will ship with the short post installed, and bikes 56-62cm bikes will get the tall. Additional posts will be available, and all stock posts are 0mm offset. There will be a 20mm offset post as well. 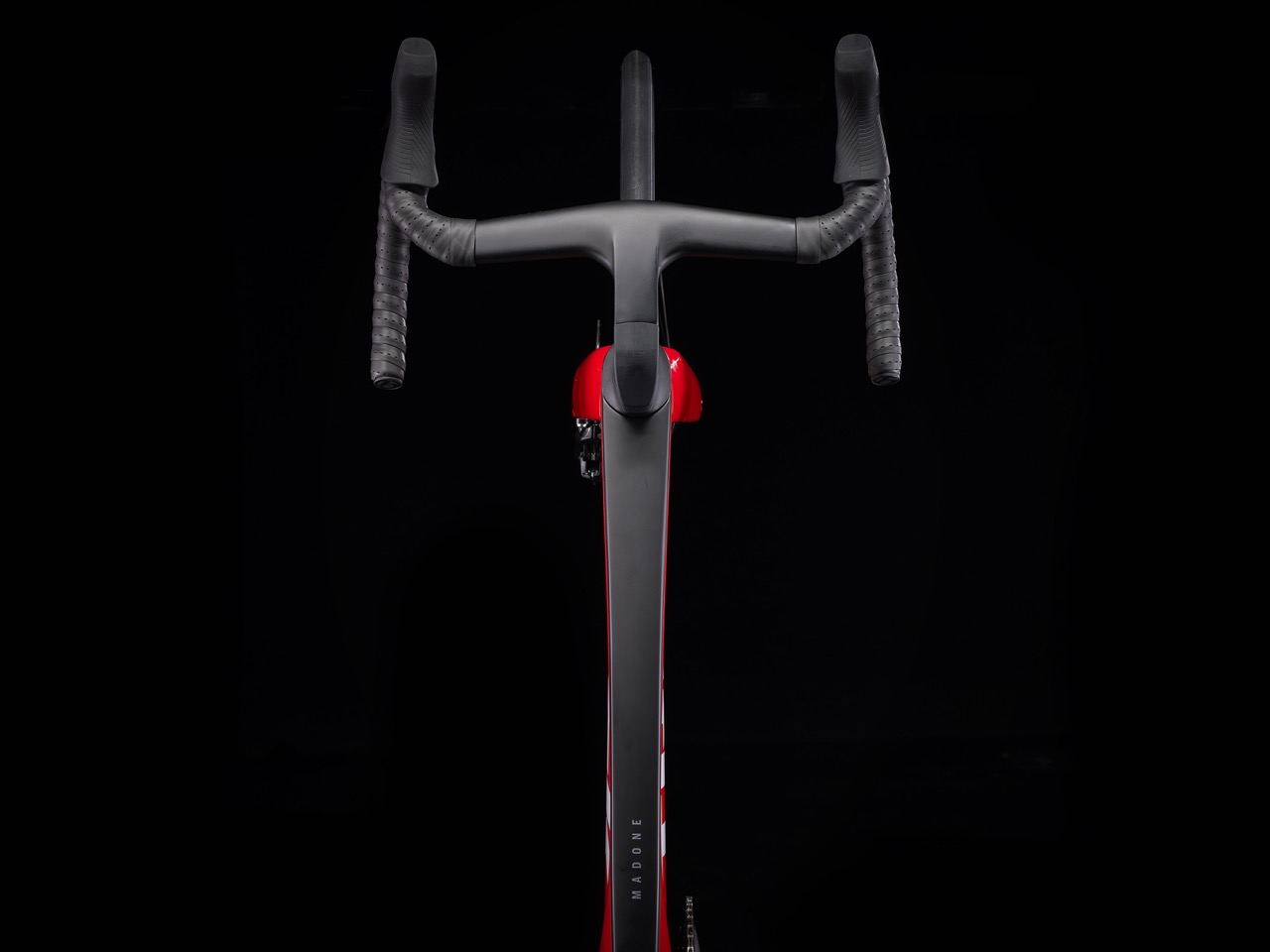 Up front, the Madone will feature a new SLR bar/stem design which uses flared drops to put the rider in a more aerodynamic position. The 3cm flare means a rider on a 42cm bar will be 39cm at the hoods, and 42cm at the drops. That should make you more aero when you need it, while providing power and control while sprinting.

While Trek is excited about the new Bar/Stem combo, they also know that it won’t work for everyone. Because of that, the Madone has different bearing covers for the headset to allow it to work with any standard road stem on the market. 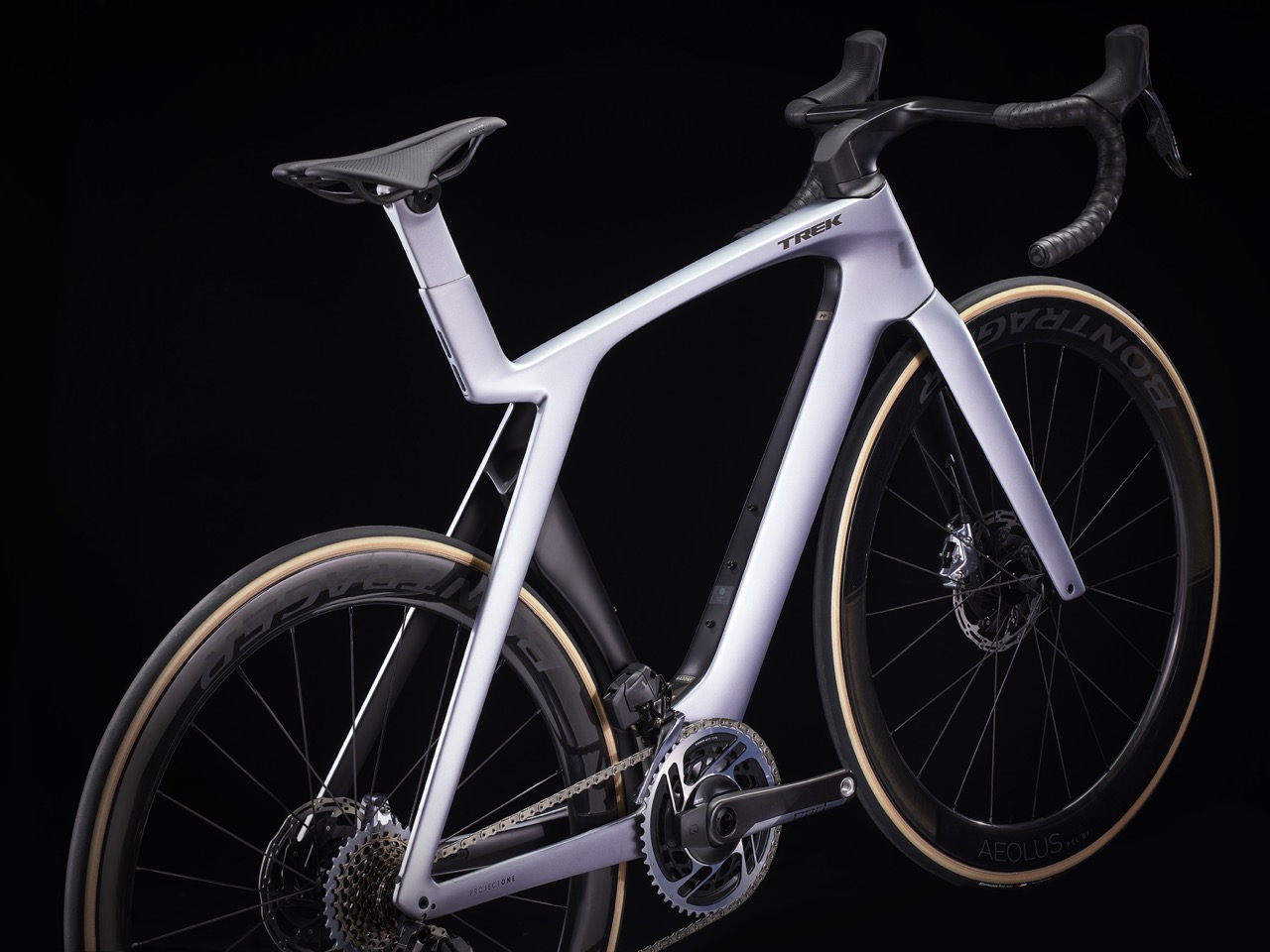 Built with Trek’s premier 800 Series OCLV carbon, it’s paired with a KVF full carbon fork with a tapered carbon steerer. As you might expect from a modern super bike, the Madone SLR is only compatible with electronic drivetrains. You’ll find a T47 threaded bottom bracket, standard 142 x 12mm and 100 x 12mm thru axles, and flat mount disc brakes with a maximum rotor size of 160mm. There’s also a removable front derailleur hanger – so if you want to go 1x (which Trek says is more aero), you can. Trek also claims that the cable routing is basically the same as the previous generation Madone. Finally, Trek gives the Madone an official tire clearance of 700c x 28mm. 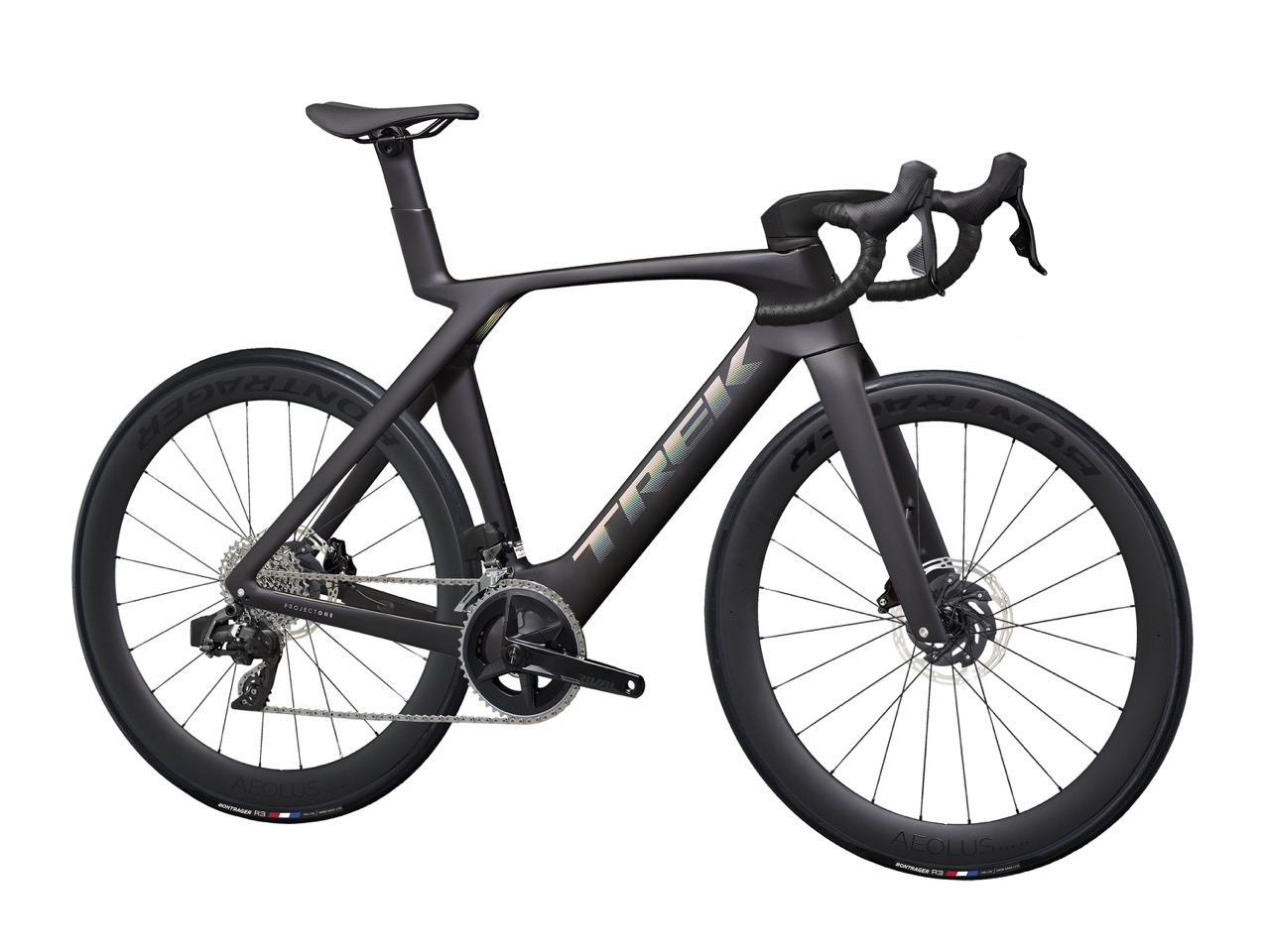 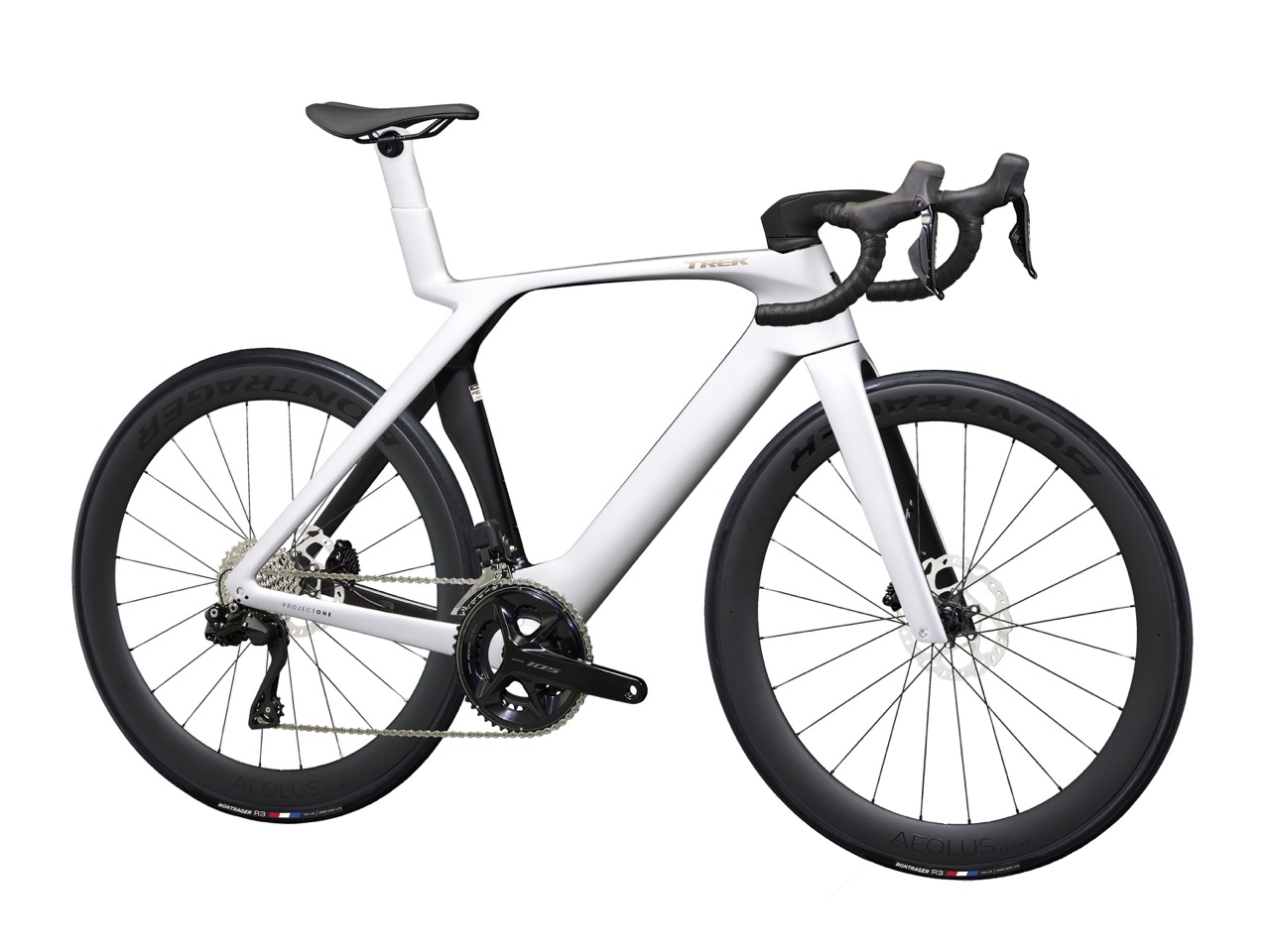 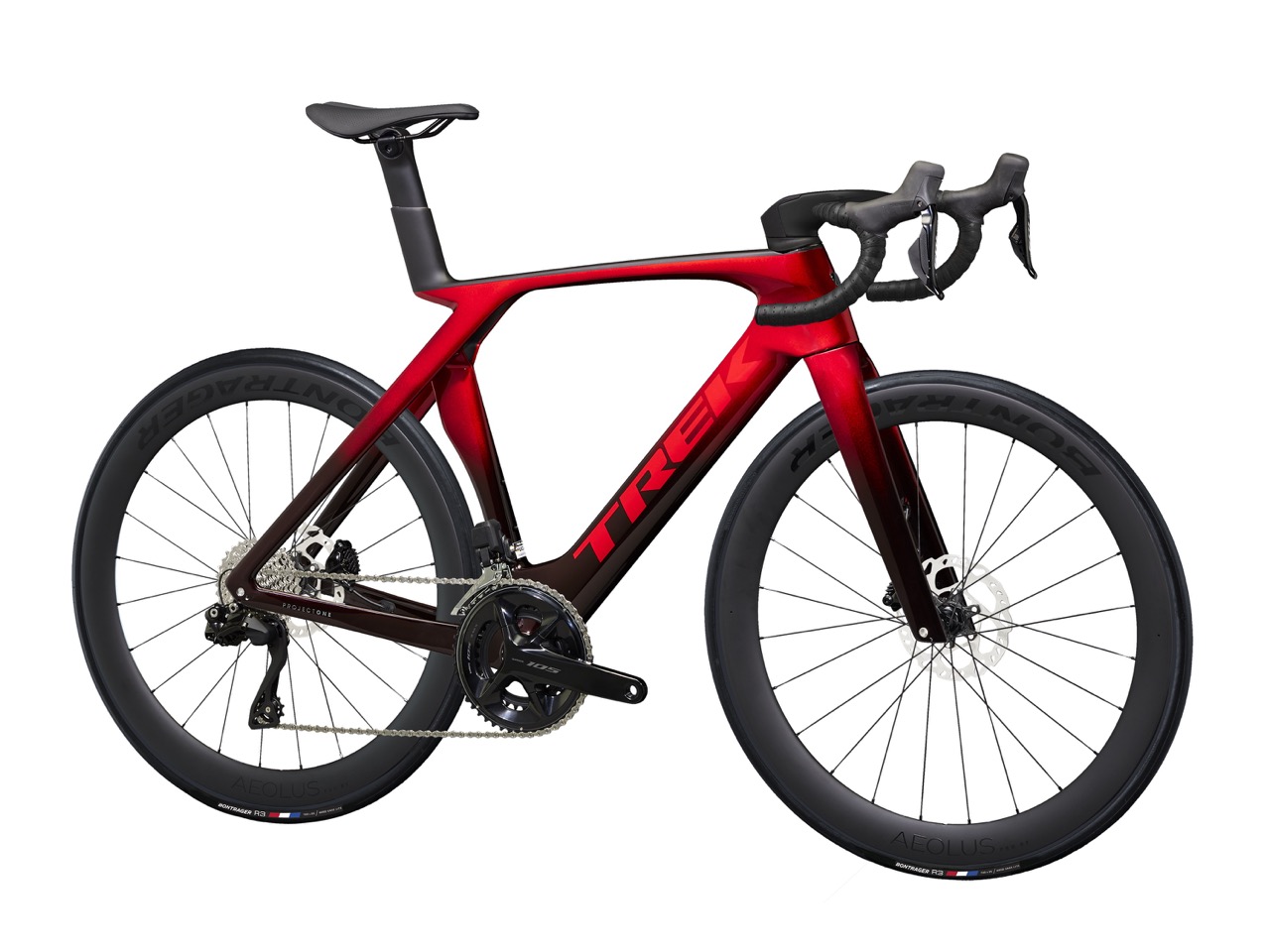 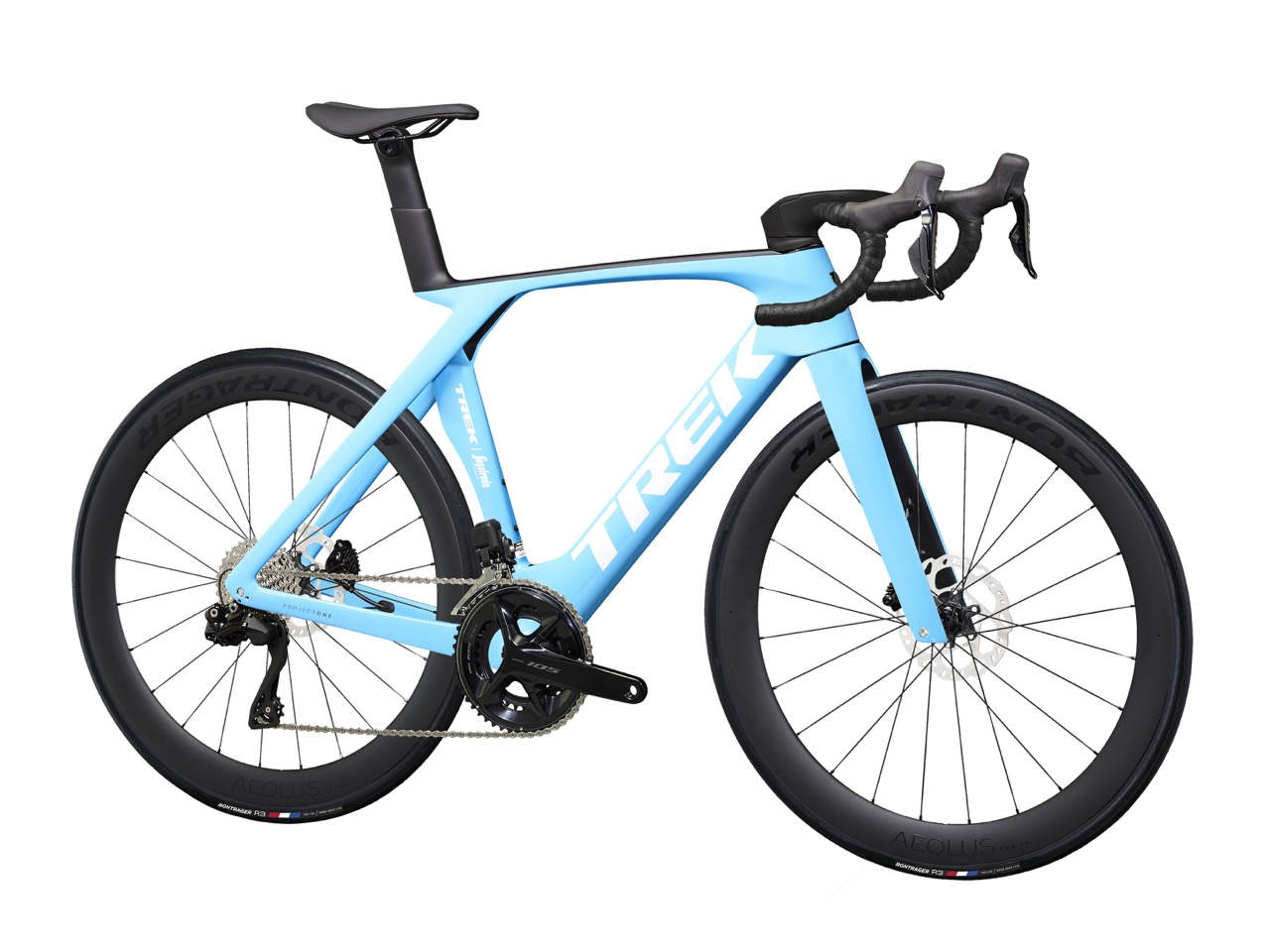 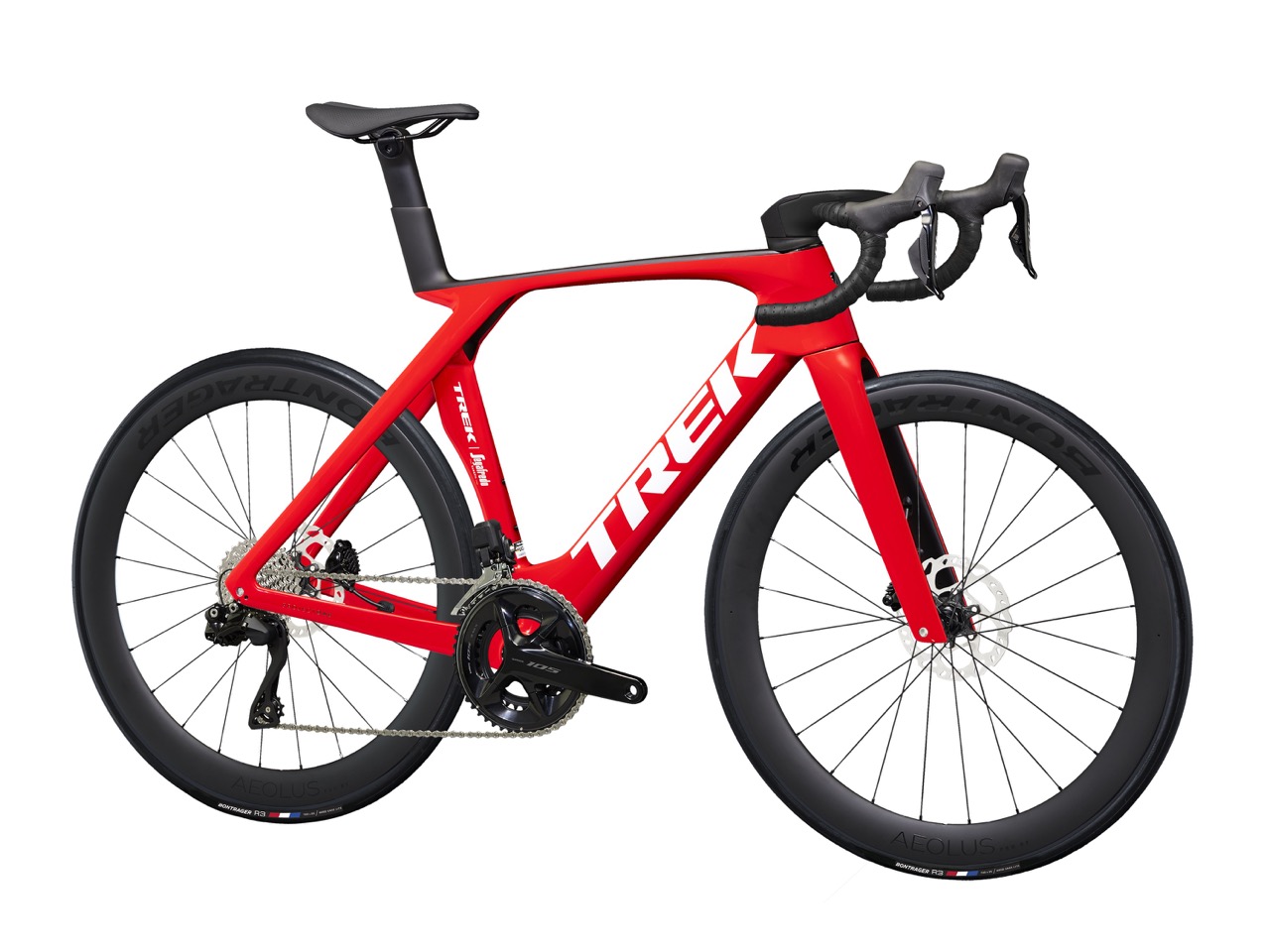 Oh boy! A 17lb+ Madone with disk brakes and electronic shifting!! My Madone 7 series circa 2012 with DA Di2 weighed 14.8lb on the road (and it was made in the USA). We just keep going backwards. I guess PRETEND aero benefits, higher weight, increased complexity and made in the ROC are what is now called progress.

Yup, the only “modern” changes I would make to my 2011 Madone are clearance for larger tires and a threaded BB. Not sure about bicycles, but in my field (semiconductors) Taiwan is world class. Remember when “made in Japan” was derogatory?

They are out to get us! Everybody should just buy your Madone!

Sounds like you are stuck in 2012, you realize weight is no longer a concern as we have learned that rolling resistance and aerodynamics are way more beneficial than a lightweight bike.

That is fake science used to convince consumers to buy heavy bikes.

It is SOUND science, not fake.

You should be comparing your old Madone to the Emonda, not this.

7 (I think) generations of Madones showing approximately 20W savings per generation says there have been at least 100W saved at 40km/h… I guess that means the effort that used to be 30km/h is now what is needed for 40km/h.. I should have been a dentist so I could afford this rig!

THisi is it! The one

Wait ’til my dentist hears about this!

Negatives: Looks like you better order the right size, probably not much room for seat post height adjustment and you’re pretty set with the integrated bar/stem (unless you go to a traditional bar stem combo like the article mentions). Also I’m disappointed with 28mm max tire clearance. any Disc frame should be able to hold 30 or 32’s. 7,999 starting price for a 105 bike is something I didn’t think we’d see this soon, but I’m sure people will buy it.

On the positive side. I’m a fan of the white bike with no massive TREK logo across the down tube. I think its a clean look and its a step in the right direction for Trek. I admit this is a cool frame design. Like everything in the industry its probably been done before, but it is certainly a cool and unique feature.

Imagine buying this bike and slapping 105 (Di2 or otherwise) on it: like buying a Porsche 911 GT3 and putting fuel saving all-season radials on it because gas is expensive.

Imagine spending 8 grand on a 105 bike. That’s the crazy part.

I know this bike is objectively better than my old one was, but I remember getting my first job in high school and lifeguarding all spring and the first half of the summer to buy a carbon Madone with 105 for ~$2500. It was the cheapest Madone. There were different frames back then, but I think it was just the material/layup, not aero/vs non-aero. It was the only one with 105, and the “entry level” race bike. Inflation adjusted that’s like $3500 today.

Your old Madone is comparable to the Emonda SL.

If you view the groupset as the only value driver on the bike, sure. Is it a “105 bike”, or is it an integrated aero bike that happens to use a few 105 parts to be completed?

Its weird looking.. the previous gen was a real Sharp looking bike but this.. uh

Where does the di2 battery go?

It goes in the downtube near the BB. There’s no wires running from the shifter down.

I’d guess that the vast majority of the aero gains are from the narrow bars. Expensive gimmick. If Trek bikes are so amazing, why do they so rarely win? Do dentists not train enough? 😉

I like it but would need more reach, that guy in the picture looks a bit cramped with his knee against his elbow at the 12 o’clock