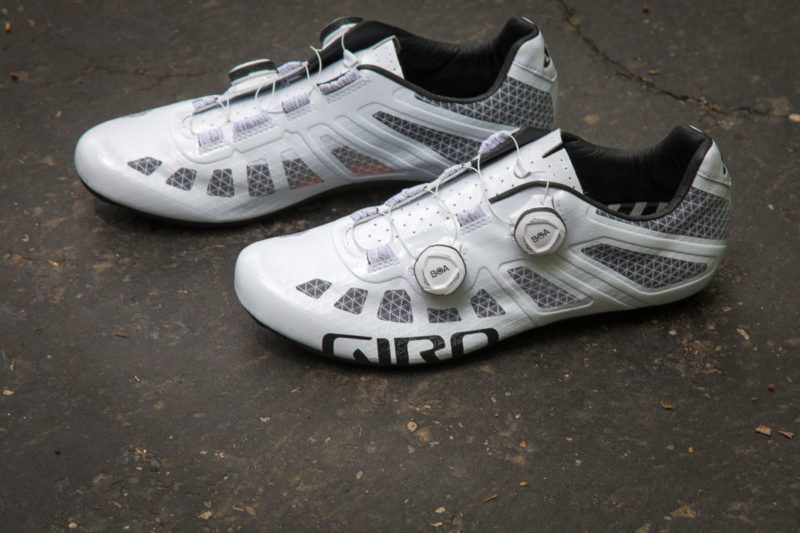 Move over laces, Giro has a new flagship road shoe. Taking much of what they’ve learned from the Prolight Techlace, Giro is now offering their first ever twin-Boa dial shoe in the form of the Giro Imperial. 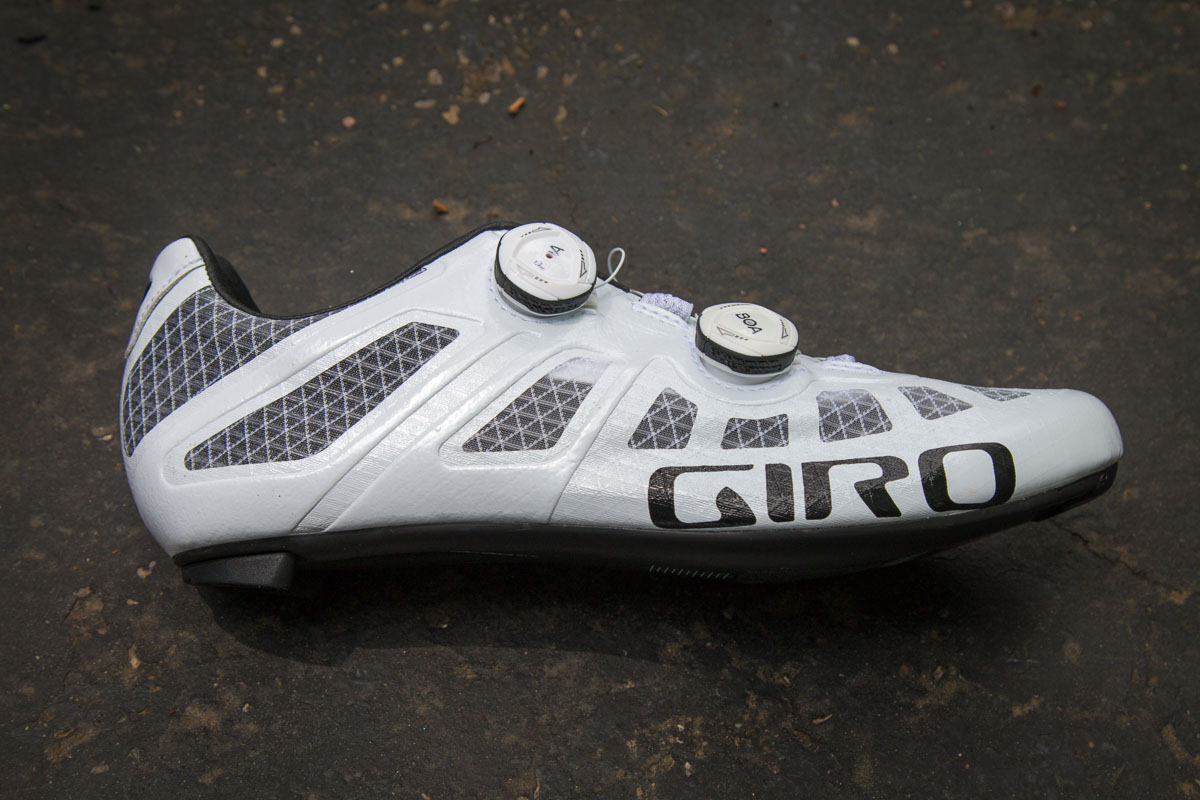 Like the Prolight Techlace, the design of the Imperial relies on a composite layered upper construction which creates a super light shoe that is still supportive and breathable. That composite material is called Synchwire – a three layer construction that includes monofilament mesh, reinforced and thermally welded Teijin TPU, and synthetic fiber mashed up into a sheet so that there is zero stretch. When combined into a single preformed upper with heat and pressure, the construction can be better tuned by zone so the shoe is able to provide support where you need it and massive ventilation where you don’t. 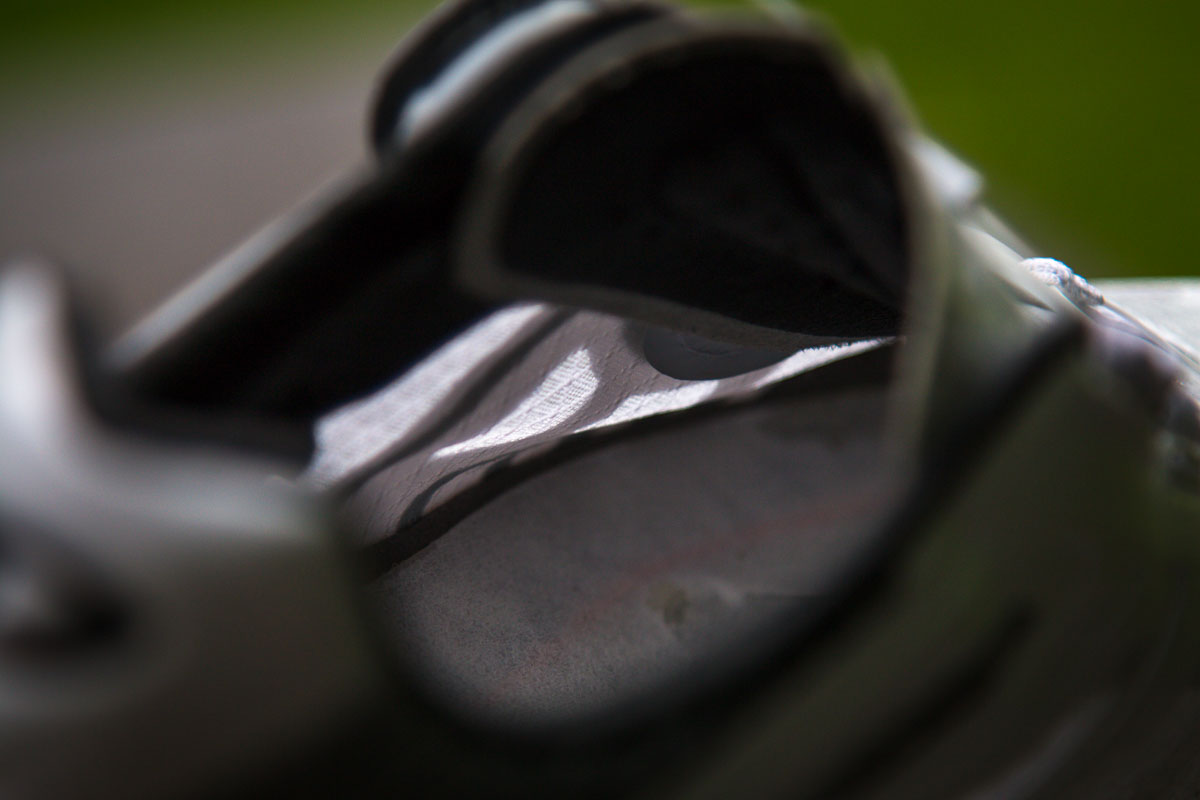 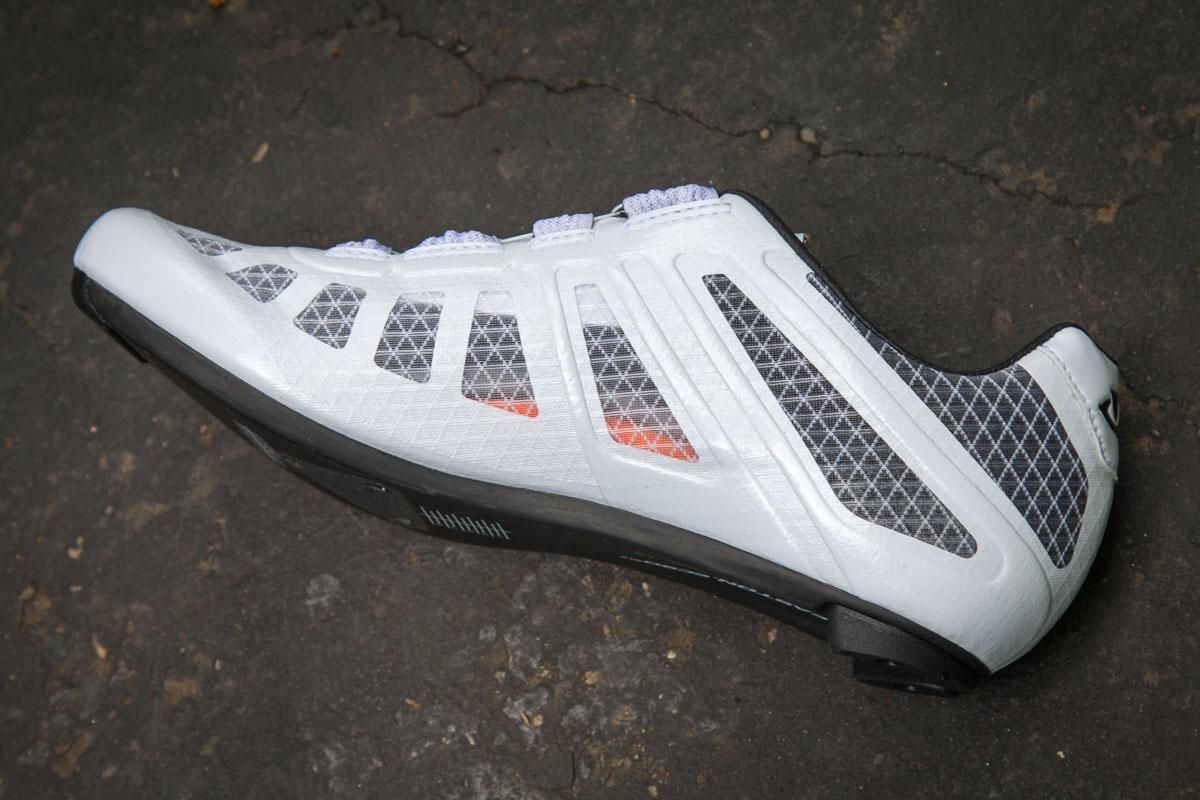 That ventilation on the upper is important – it turns out in Giro’s testing that vents on the sole of the shoe don’t actually help all that much in cooling down your feet (not to mention they let water into the shoe when wet). So while the Imperials only have one small vent at the toe on the sole, almost half of the upper is a vent. Our first rides on these shoes confirm that this is a shoe that breathe exceptionally well. 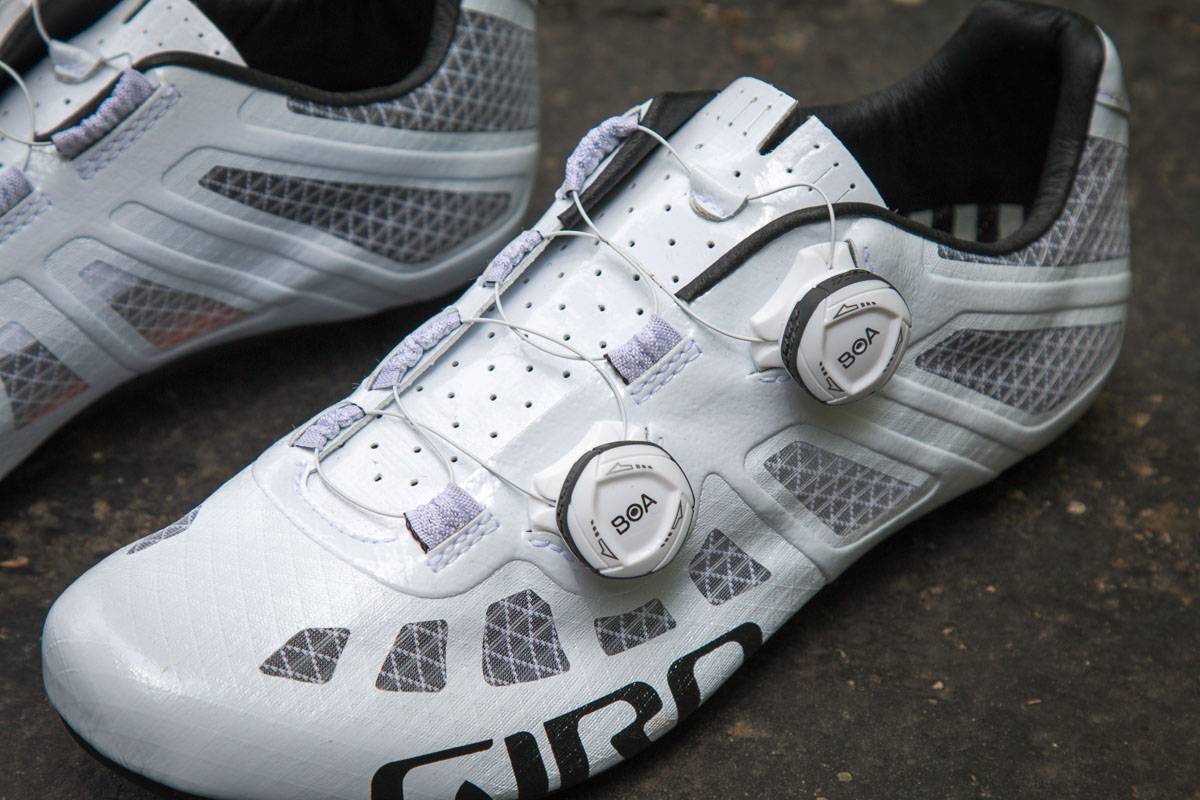 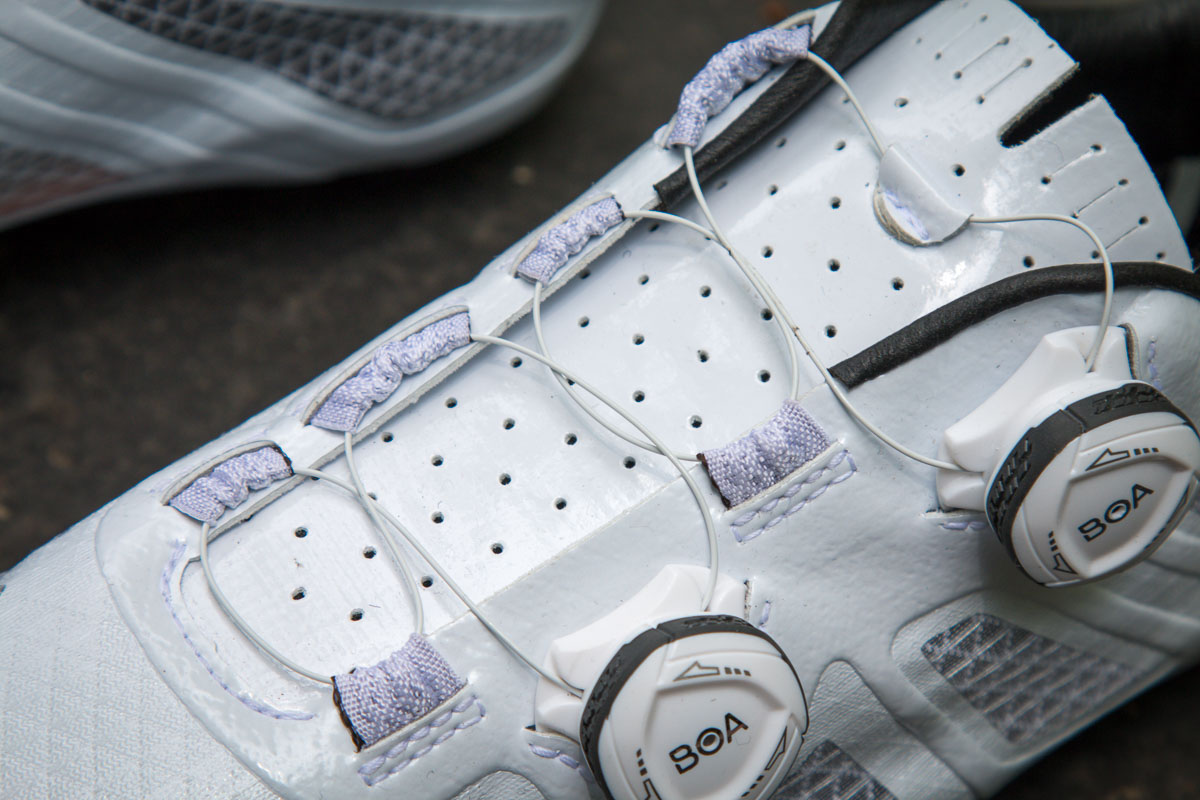 One of the most obvious changes to the Imperial is the addition of two Boa IP1 dials (which adjust in either direction). That’s a first for Giro. They’ve had shoes in the past with a single dial, but never two. In order to get the dials to feel more like Giro’s beloved laces, the Imperial uses a double lacing pattern with soft lace guides rather than hard plastic. This is said to eliminate hot spots and potential fit issues with other lace guides, but it’s also lighter. 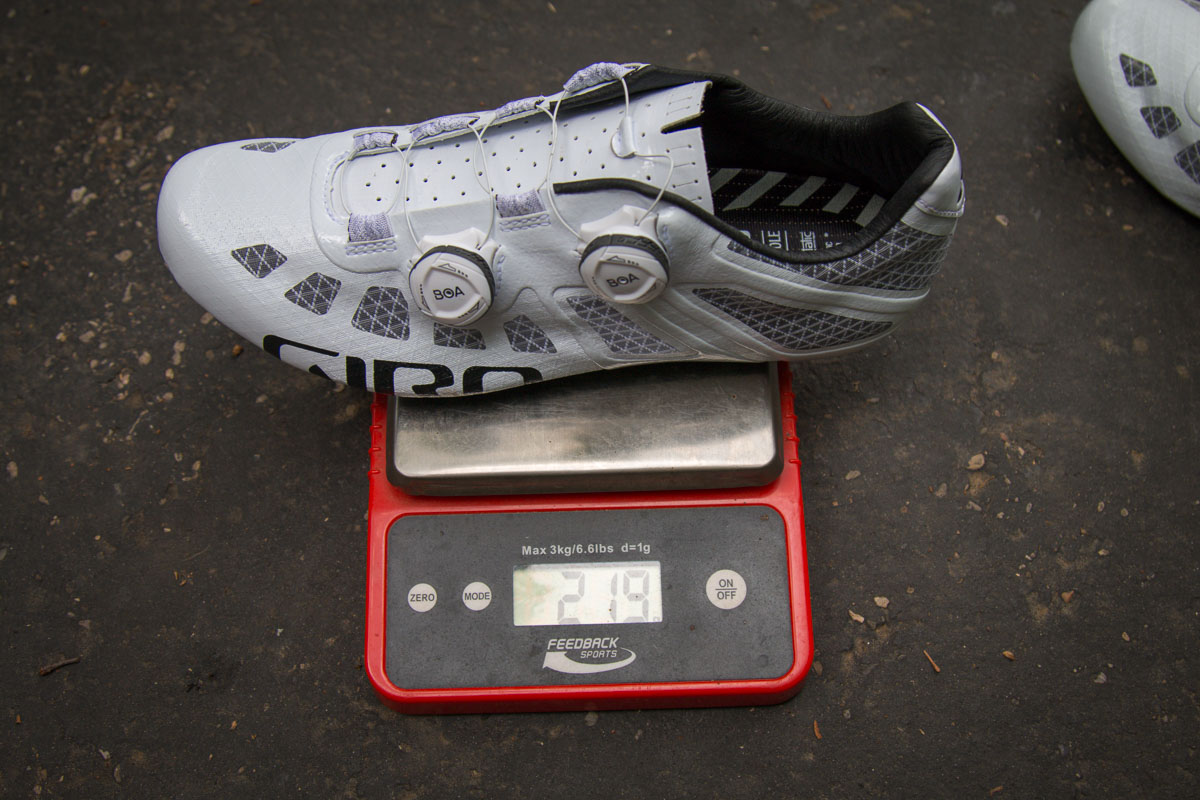 The Imperial was not designed to be the lightest shoe that Giro could produce. In fact, Giro had produced prototypes in the 130-135g range but said that at that point they “verge on art project rather than a commercial, repeatable process.” To get them that light they claimed it required sacrifices that weren’t worth the cost, and left them with a lot of waste. They also wanted to make a shoe that was real world durable, one with replaceable heel pads and non-titanium inserts. With that said, the Imperial is still quite light for a dual boa shoe coming in at 219g per shoe for a size 42. 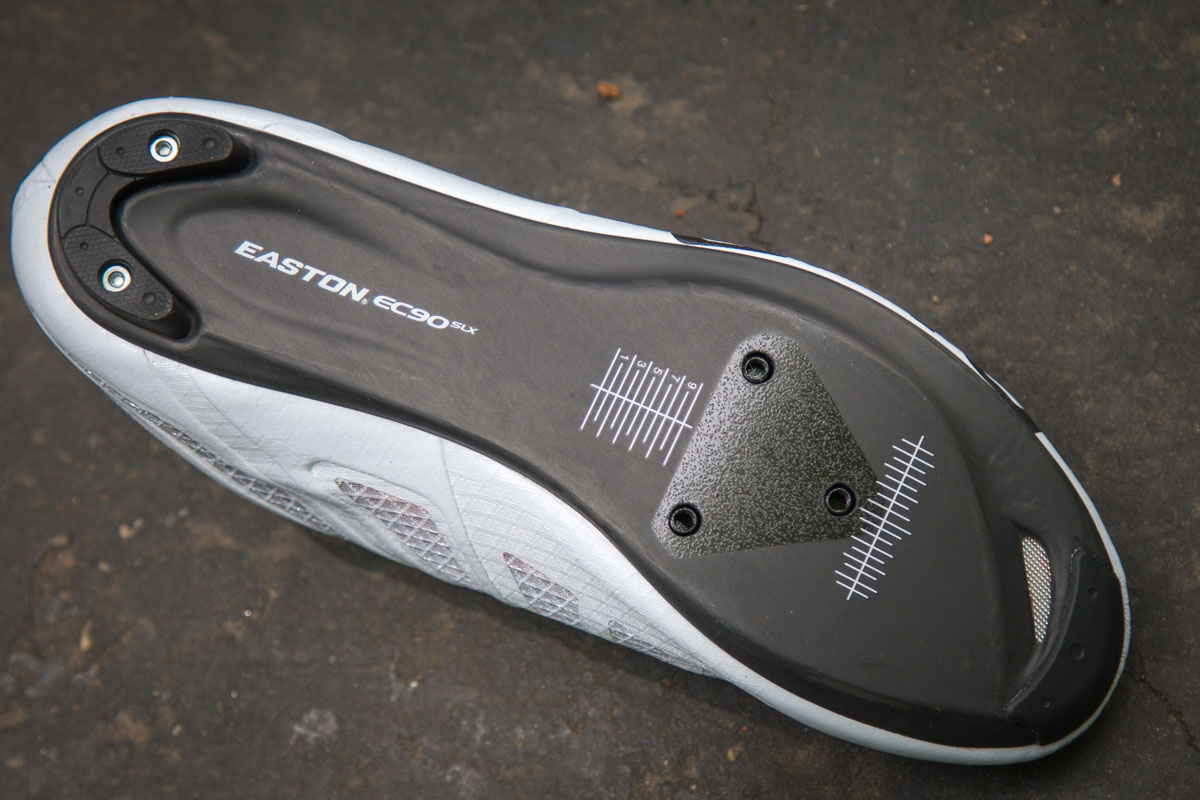 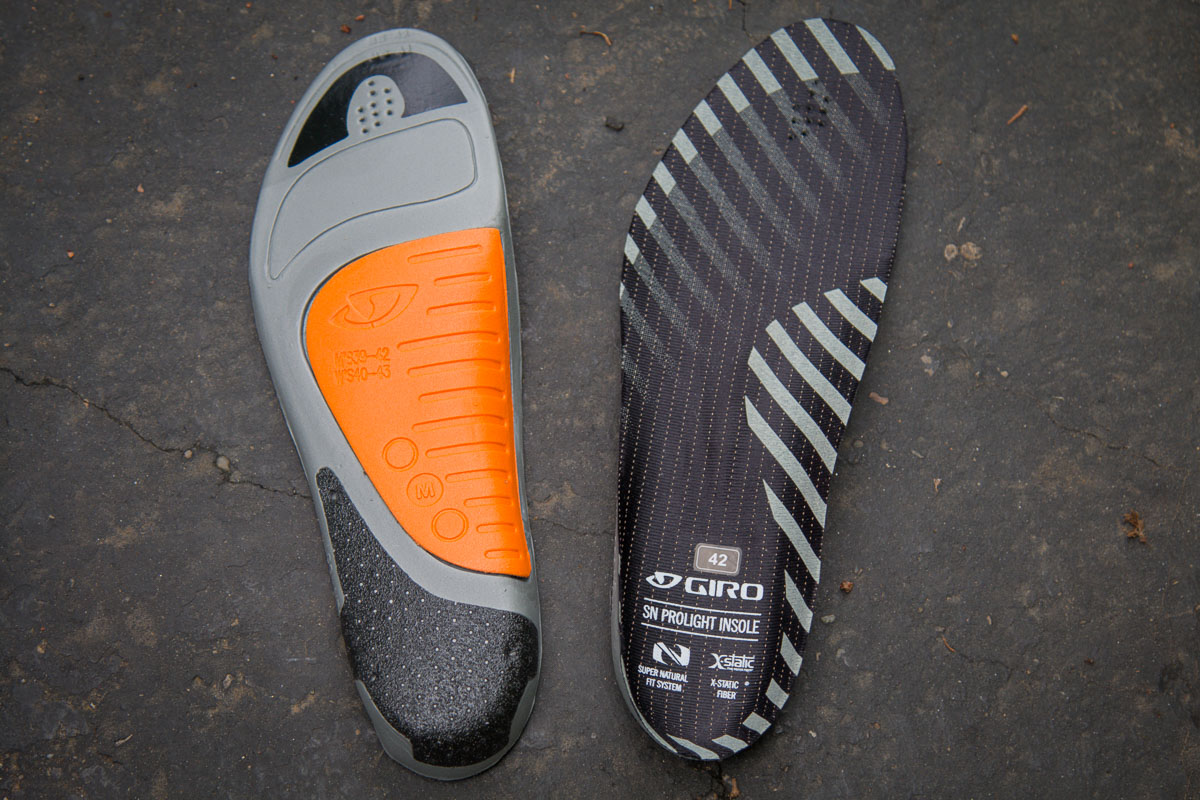 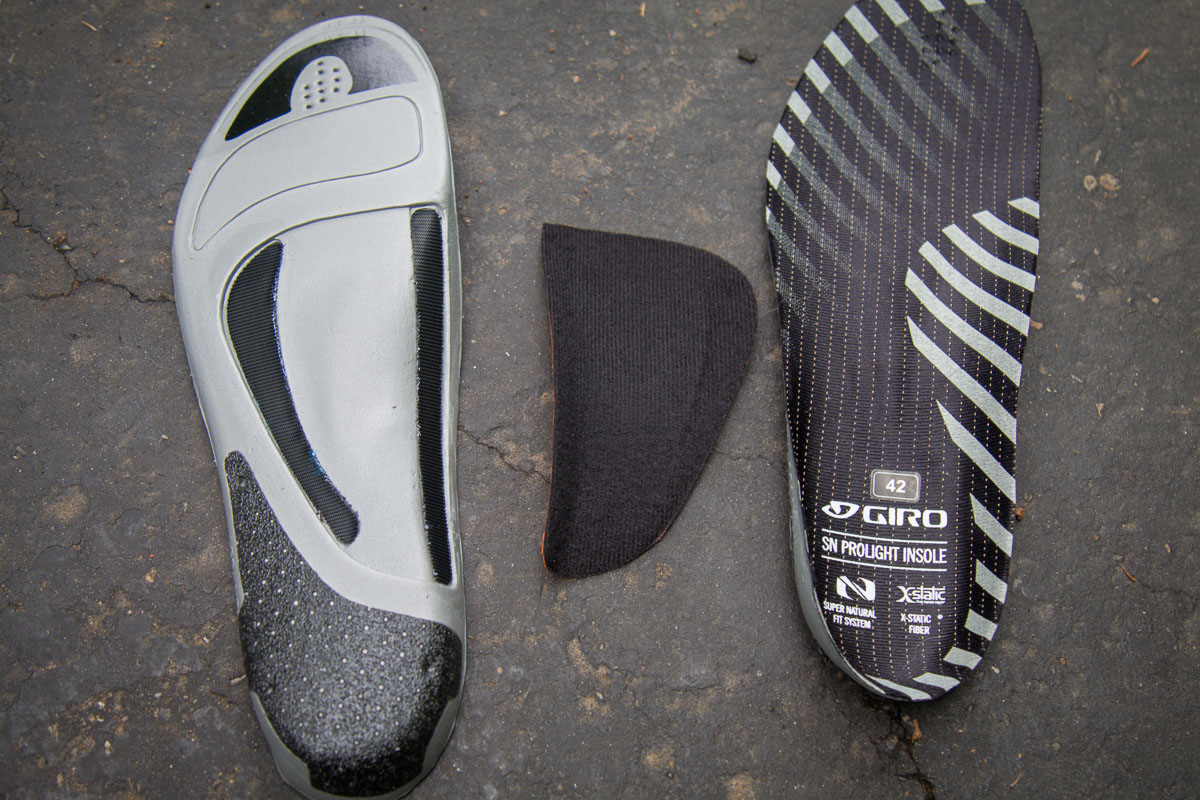 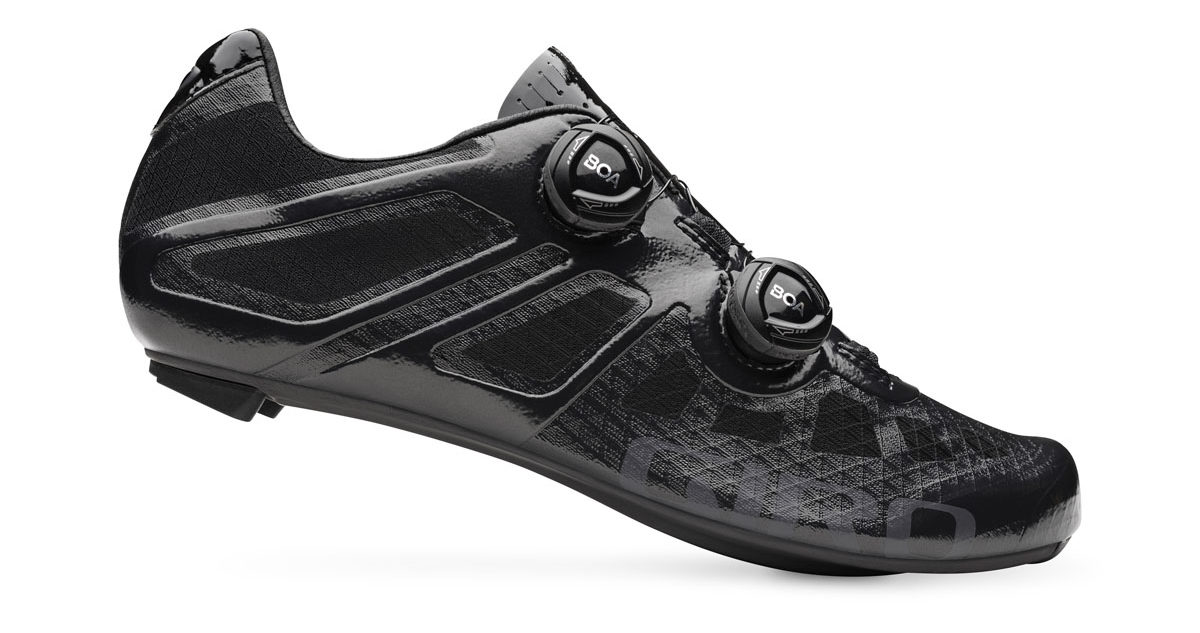 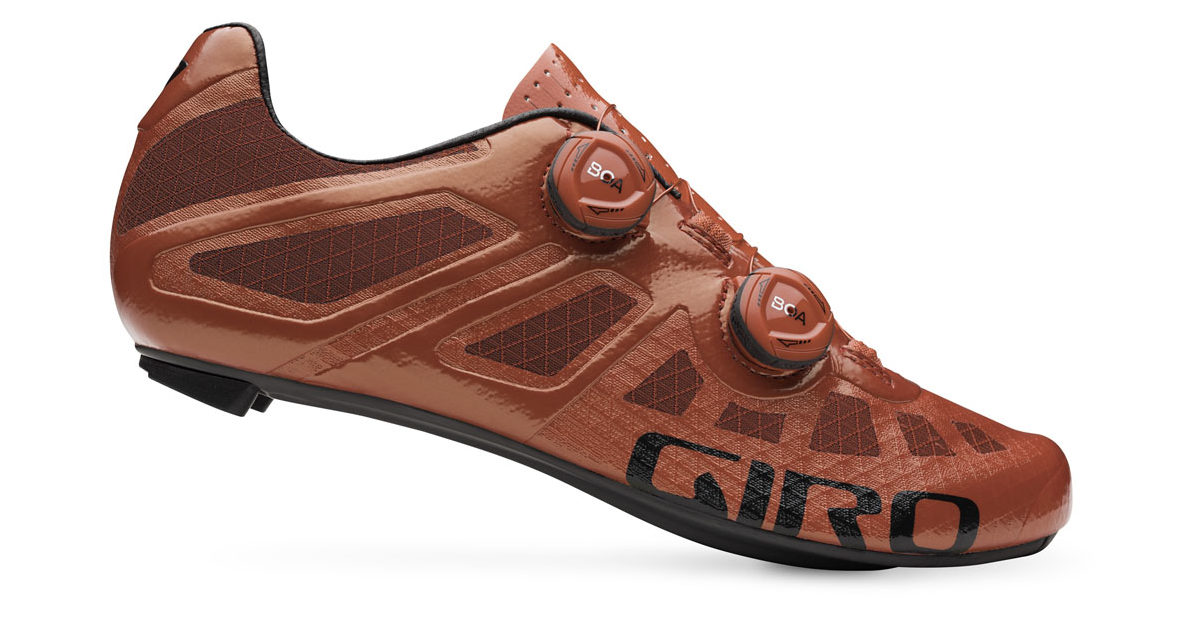 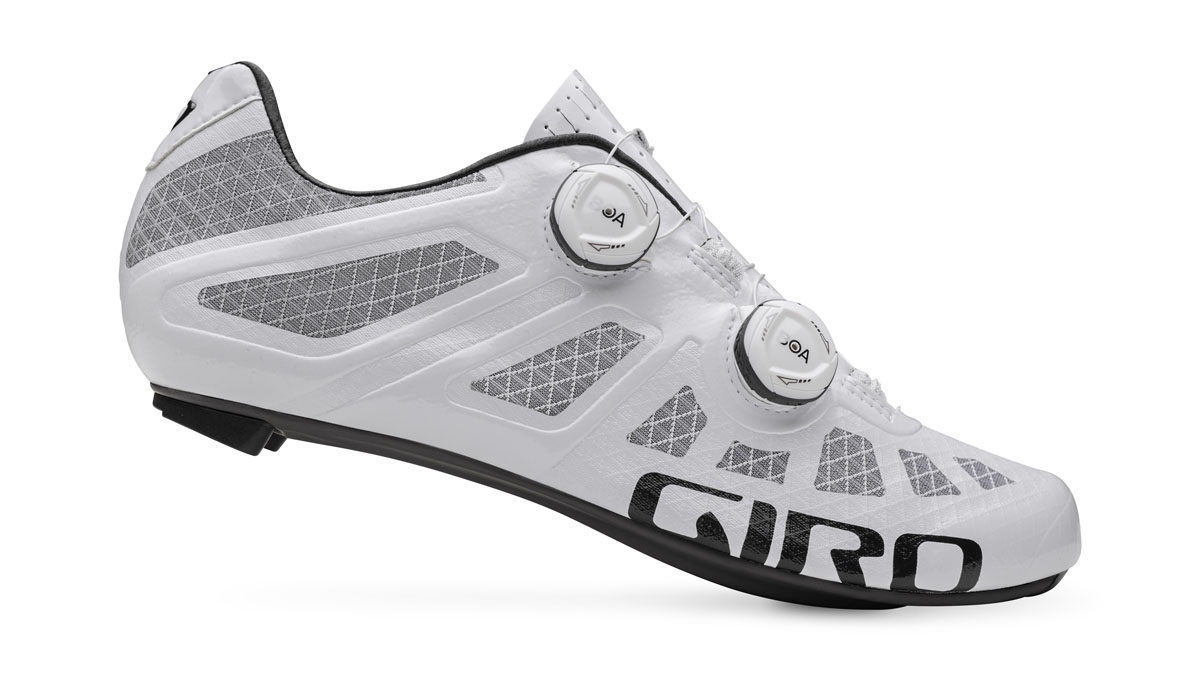 Sold in three colors for $425 a pair, the shoes are available now. Sizing is offered in a men’s performance fit with EU 39-48 in whole sizes, but only 42.5-45.5 in half sizes. That’s a bit of a bummer if you have small or large feet and typically wear half sizes like me. I’m usually exactly a 41.5 so I received a 42 as a tester which was a little big. I’m waiting on a 41 to see if that fits better, and will report back with first impressions then.

On road shoes the adjustment is in the cleat, road shoes with moveable mounting points are rare indeed.

You see it more and more every day. See Shimano S-Phyre. Typical road cleat adjustment range isn’t that great, a fraction of what is offered in a mountain/spd setup.

Don’t Look and Shimano SPD-SL offer fore/aft adjustment already? Or do you just mean MORE than what is allowed with the cleats themselves?

There’s adjustment on the cleats already though. I guess if you have really weird feet like freakishly long toes relative to foot then you might have issues, but I doubt its that common.

The real #FAIL is the lack of half sizes from 39-42.5. Seems silly to exclude 3 sizes that are popular enough that Specialized offers them in their entire top-of-line S-Works road shoe lineup.

I guess, since I’m a 41.5, I’ll continue to wear S-Works shoes. Sadly I’ve been waiting for a year for these Giro shoes to hit the market was really hoping to make the switch after 10 years on S-Works.

I’m not interested in these shoes because Giro is owned by assault weapons firm Vista Outdoor. Same for Bell, Camelbak, Blackburn, Bolle and Bushnell.

For many of us, that is a reason to support their company and added impetus to invest in their fine products. Happenstance, I only use Giro helmets (and have for 35+ years) and race with Bolle (RX) glasses before going to Oakley.

For many of us, that are tired of hearing of mass shootings, and seeing nothing is ever done about it, knowing where NOT to spend my money is extremely helpful.

I didn’t know of Giro’s involvement in assault weapons. I’ll take my dollars elsewhere. Thank you for informing us.

Which one of Visa Outdoor’s many fine companies is an assault weapons firm again? Savage is the only rifle maker they own and nothing they make is an “assault rifle”, even by the ridiculous standards the media uses.

That said, every one of their brands makes high quality stuff, for outdoor enthusiasts. If you want to be so hyper-liberal that you won’t appreciate good quality because one of their companies makes budget-minded hunting rifles that have been used by generations of hunters, well, you’re already beyond reasoning with.

Vista sold 2.3 billion dollars last year. Of which an account like REI represents less than 1 percent of sales. Boycotting the brands does nothing to the parent company at all. 23 million dollars out of the pockets of companies that develop products to better cyclists lives is notable though.
We’re shooting ourselves in the foot, let bell and giro continue to work at making helmets better for the rest of us and cut them some slack. Vista was planning on selling these guys before any media backlash happened anyways. If you like the shoes then buy them. Don’t use some misguided high road to justify your purchase one way or the other.