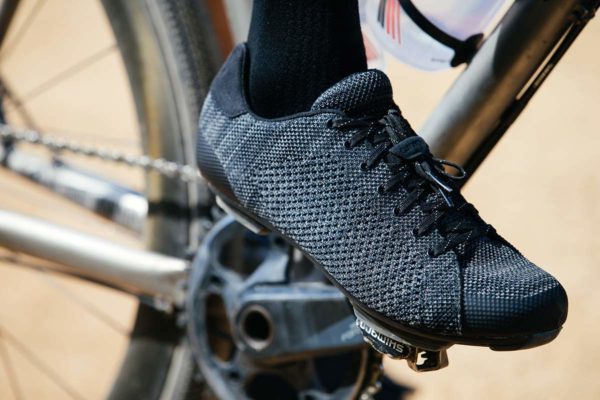 Taking cues from the running shoe industry, Giro has introduced a complete line of cycling shoes with 3D knit uppers. They promise a soft, comfortable sock-like fit, with options for road, mountain and commuting. 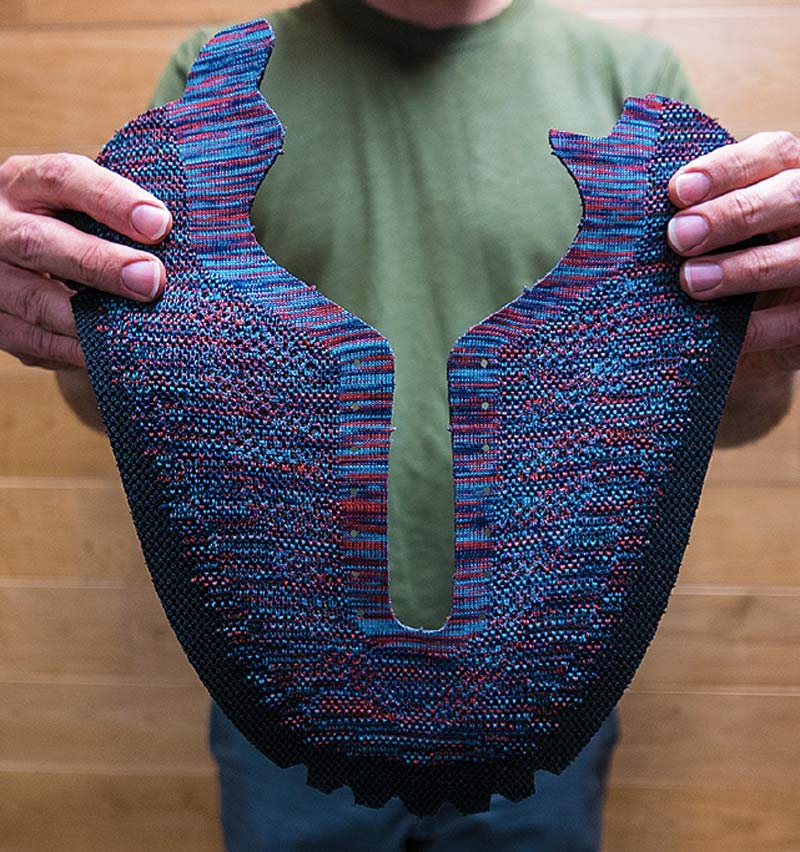 The Xnetic knit upper is created as a single piece, which is then reinforced on the shoe with a TPU skeleton to retain its shape under the stresses of hard pedaling. But it’s breathable, and lightweight, and they treat it with a DWR coating to keep moisture from moving the wrong way. Should you soak them through, Giro says they dry very quickly. 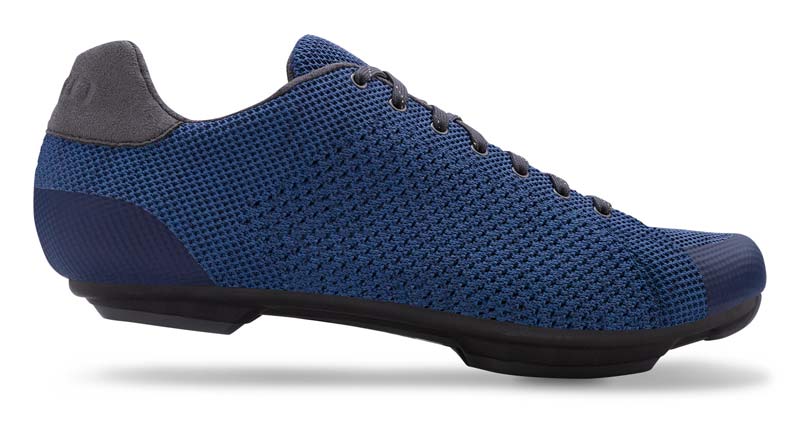 The Republic R is the commuter offerings, which gets minimal reinforcements, but adds a heel and toe bumper section. Retail is $140 (€159 / £139), available in blue and black. Claimed weight is 310g for 42.5EU size. 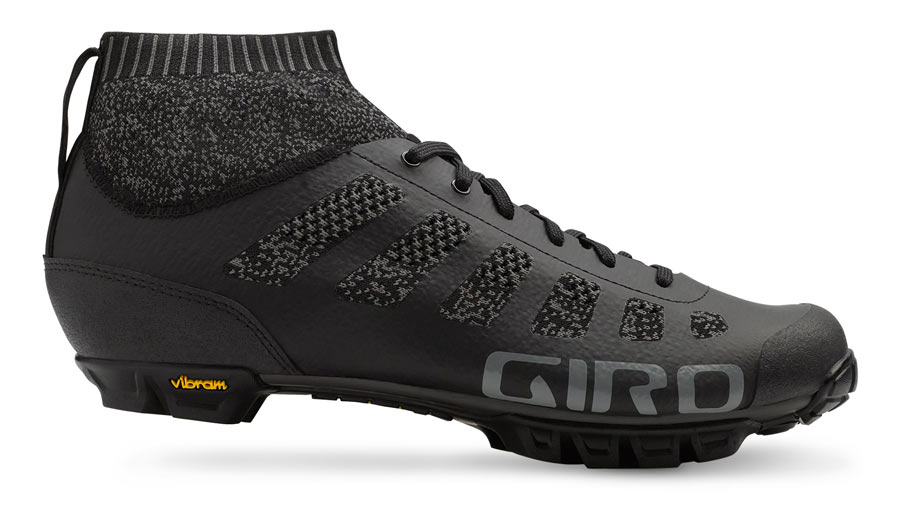 The Empire VR70 uses the same Vibram outsole on the Easton EC70 carbon sole. The upper gets the most extensive TPU skeleton, offering use-appropriate scuff protection, and a nice tall cuff to keep grit, rocks and other junk from sneaking inside.

Built off the same platform as their high end Empire road shoe, the Empire E70 knit comes in three colors for men (above) and two for women (below).

They also get an Easton EC70 carbon sole, with replaceable heel and toe blocks so you can walk in them a little easier.

The mountain shoe looks like you’re the dude that wears wool socks under his Keen sandals.

Nothing wrong with wool socks… but I get what you mean!

Seems like these have been released a seasoned 2 too late, spring/summer commuter shoes need ventilation , autumn/winter do not. At least not where I live

What cleat drillings do these have? It doesn’t say in the text and there are no pics of the soles, except for the road shoe…

The Republic and Empire VR70 are both for 2-bolt cleats, same as their counterparts in the current lineup.

Unless you exclusively ride in the dry, this seems like a bad idea

ebbe
Reply to  Other Aaron

Put a pair of Velotoze over them for the wet?

There are other shoes that have a ton of ventilation, and people are still able to use those shoes. I suspect these shoes and the owners wearing them will survive the elements just fine. People will just wear shoe covers appropriate for the conditions when necessary. I look forward to trying a pair on.

(Oh wait, these aren’t made by Specialized, which causes an instant gag reflex, even if they made products that cured cancer.)

These are sweet, very unique, I like it. Very good move by a sweet, nimble, little company. I will support them until they’re too big to have street cred.

Cool idea. But if you really want to make a comfy cycling shoe, how about something not shaped like a pointy Italian ballerina slipper? You know, something shaped like a foot.

The VR90’s are far and away my favorite/best mountain bike shoe I’ve ever used. Among many, one of their best features is how easy they are to clean, thanks to their smooth, uniform outer. These are the opposite of that… These seem different for the sake of being different. Stick with what works, Giro..

Well, they bucked the trend with the Empires and look where it got them. It sounds like the fibers are coated to help repel dirt and make them easier to wash, time will tell how long that lasts.

As far as innovation goes, these should be more breathable for summer riding, and on the manufacturing end there is less waste so I don’t think these are purely just to be different.

I like the way they look, but I still don’t get why people would prefer laces vs. straps for adjustability, and the material doesn’t seem super robust. I’d worry a crash would destroy them. Also, if I wouldn’t wear a shoe like that walking around on a slightly wet or rainy day, why would I want to wear them on a bike? I’m assuming they’ve thought of all of these points in design, but I’d need to be sold on them a bit more.

how are laces even a thing. any supple upper will require adjustment mid-ride. millenials and their care for hipster cred?

I keep thinking this myself, but I can’t remember the last time I ever adjusted my shoes mid ride. Technically, most synthetic uppers shouldn’t stretch, so unless your foot is changing sizes during riding, they won’t need adjusting after tightening the first time.

My feel dont change size, but I do notice a difference between weather, and altitude, and temperature?
If you’ve never adjusted your shoes mid-ride? Cool. I buckle up loose when I start, tighten when I ride, then loosen once I’m done and headed home. I can’t see riding with laces, unless it’s a pub cruise.

Literally never once adjusted my Empires mid ride and I have both the road and mountain version, have been using them exclusively for years, ride about 450-550 hours per year.

Laces Out
Reply to  tyler

How often do you actually adjust your shoes mid ride? If football players, track and field athletes, and climbers use shoes with laces just fine then what makes you think laces aren’t suitable for cycling? How many sports do you know that exclusively use Velcro and boa systems only? Have you tried the empire’s on a ling ride at all? Silly baby boomers or whatever you are, always rejecting change and believing the old way is the only way, just for some old-timer cred…

Laces offer more points of adjustment. It is true that they eliminate any possibility of on-the-fly adjustment but I find they tend to be easier to get properly adjusted the first time especially after they’ve been worn a few times. They do loosen up a bit while riding so the trick is to start with the laces a little too-tight.

Velcro only belongs on shoes for those under the age of 5 in my opinion. Laces or boa only, the side-effect is that shoes using these systems are the cleanest, freshest looking bike shoes out there.

Also, on the MTB side having laces eliminates buckles/knobs on the side of the shoe that get clogged with dirt or smashed on trailside obstacles.