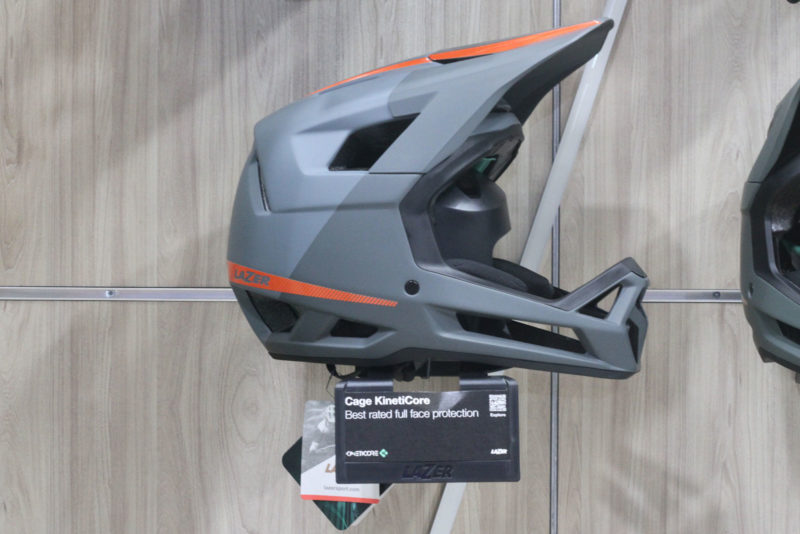 Lazer has rolled out KinetiCore across more helmets, most notably the new Lazer Cage KinetiCore, their latest and greatest full face helmet offering. This one is interesting not only for its use of Lazer’s proprietary rotational impact protection system, but also because it is the first (to our knowledge) full face helmet to have a safety rating published in the Virginia Tech database. 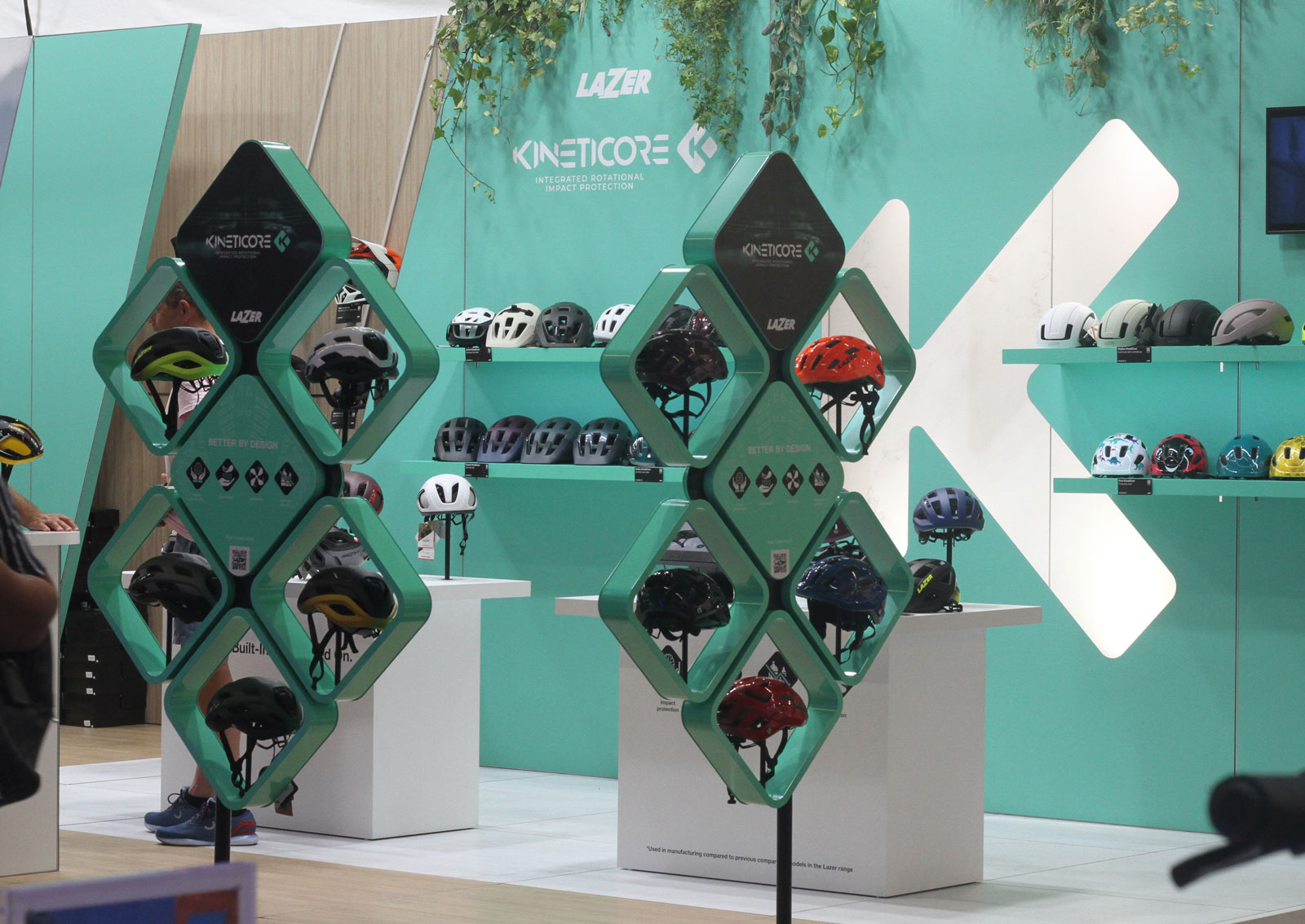 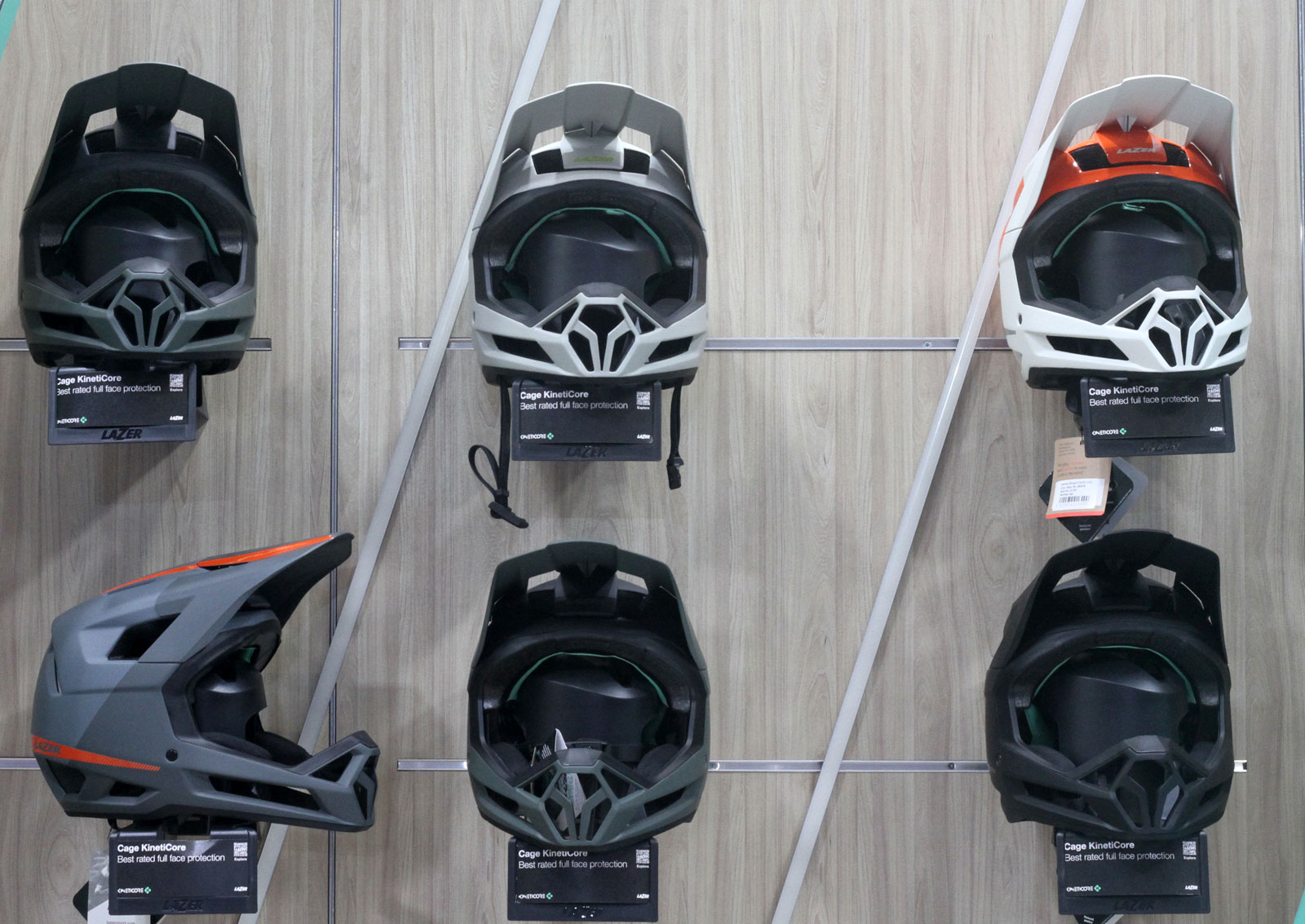 Intertek, another independent and certified testing agency tested the Cage KinetiCore too; they have disclosed the chin bar test data to show a deflection of 10.3mm upon impact.

It was awarded a 5-Star Rating, with a Score of 11.76. The lower the score, the safer the helmet. That compares to the Specialized Tactic 4 MIPS open-face helmet that score 8.55. That would suggest the open-face helmet is safer than the full-face helmet. That’s mot quite the full picture,  however; the Virginia Tech tests do not include a test for the chin bar itself, so that doesn’t come into the equation. 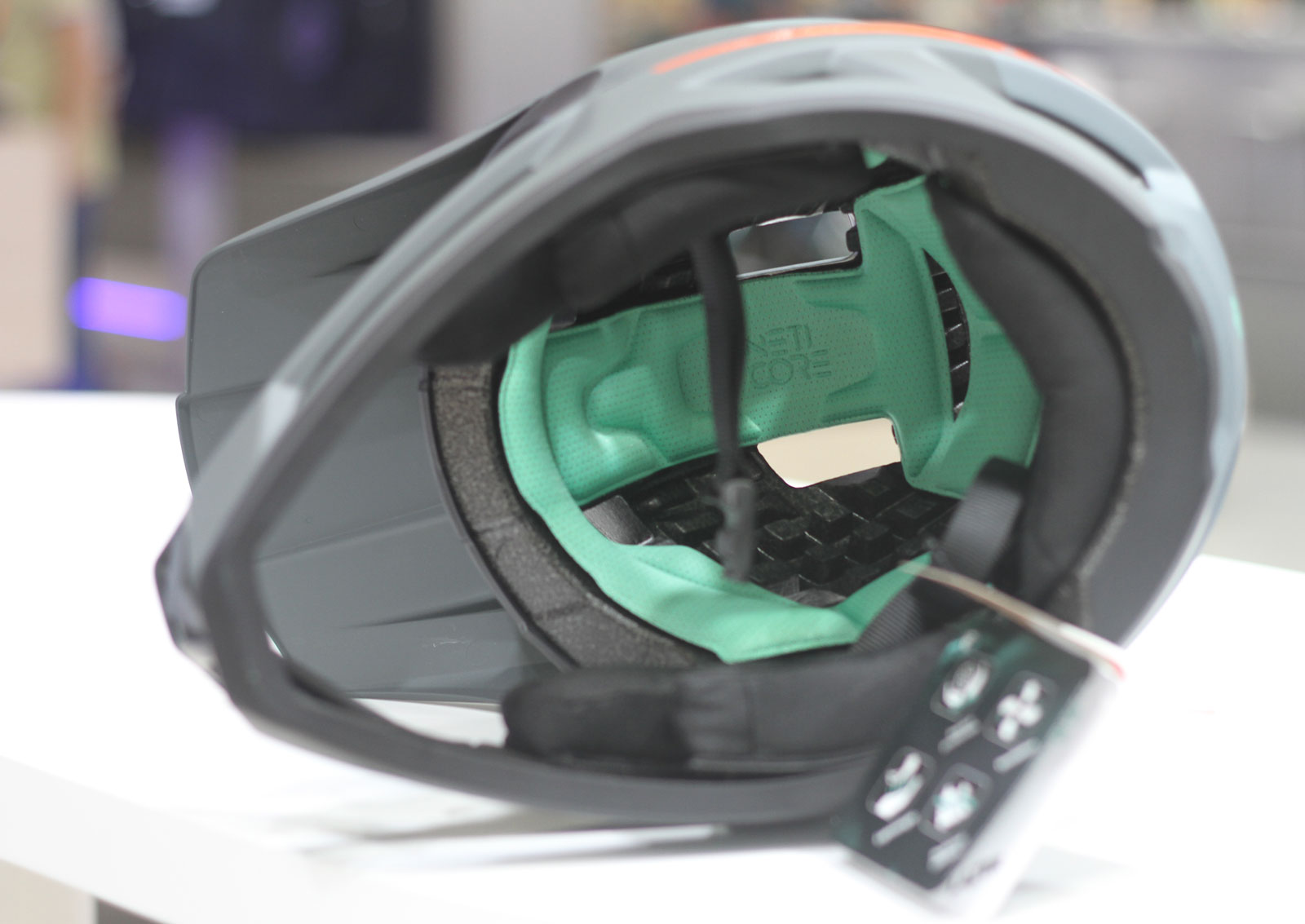 When brands submit their helmet to Virginia Tech for testing, they are not obliged to publish the result. Thus, it may be the case that other full face helmet manufacturers have submitted their helmets for testing, but have decided against publishing the result. 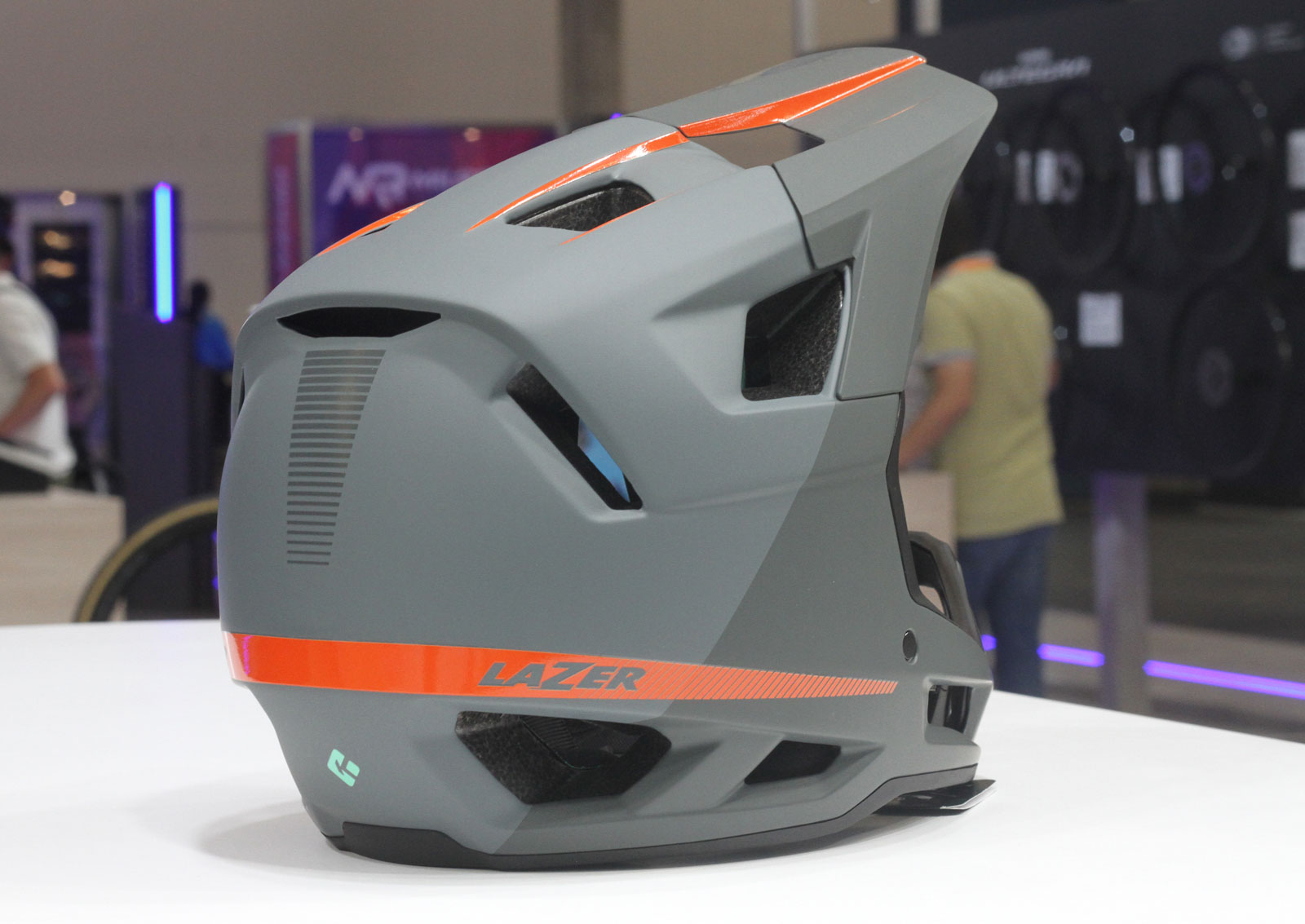 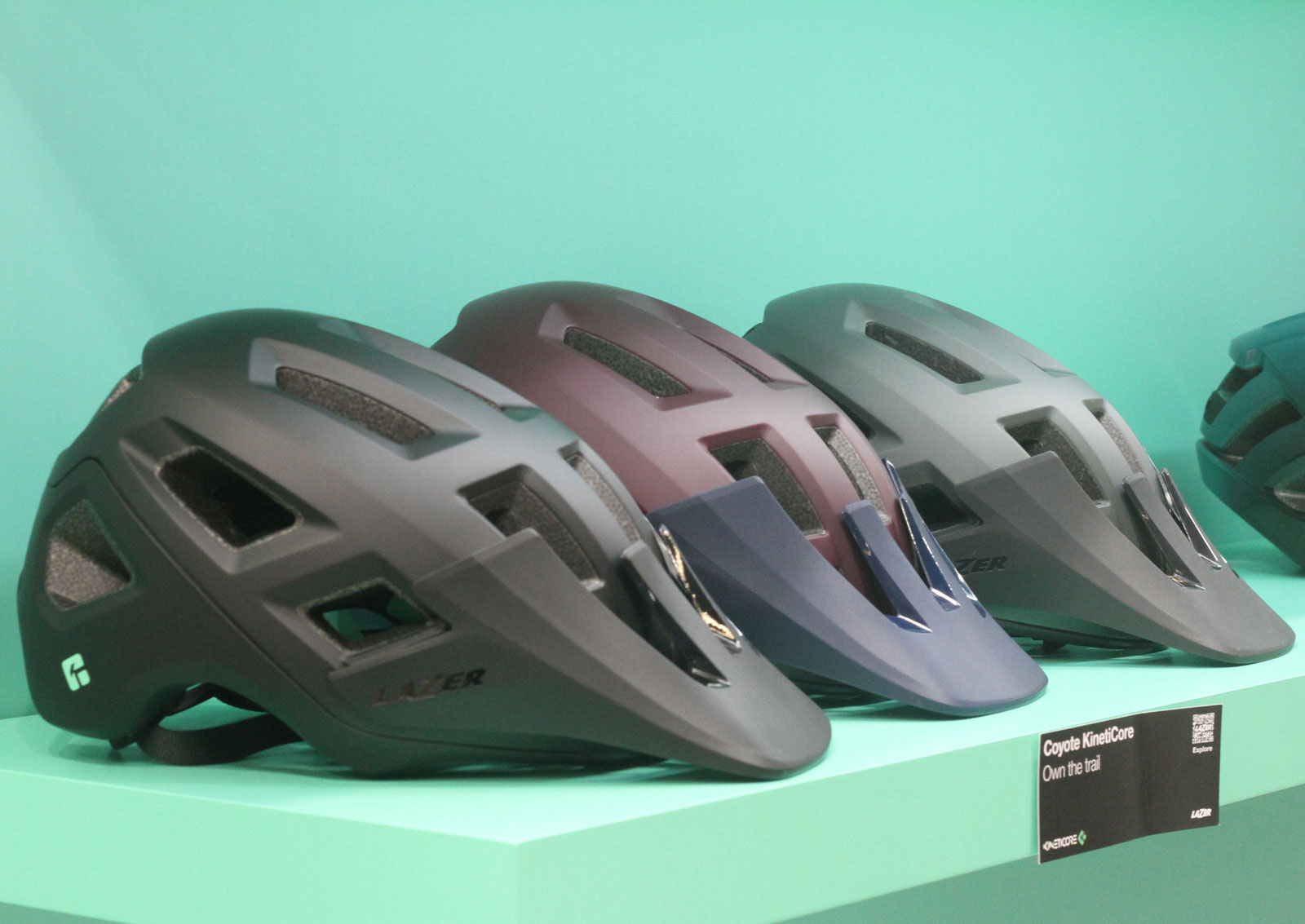 Lazer were also showing the new Coyote KinetiCore Trail Helmet. This replaces the Coyote MIPS, a helmet that received a 4-Star rating from Virginia Tech. Switching out the MIPS liner for the KinetiCore EPS arrangement pushed the helmet up to a 5-Start rating, undeniably a great advert for their proprietary system. 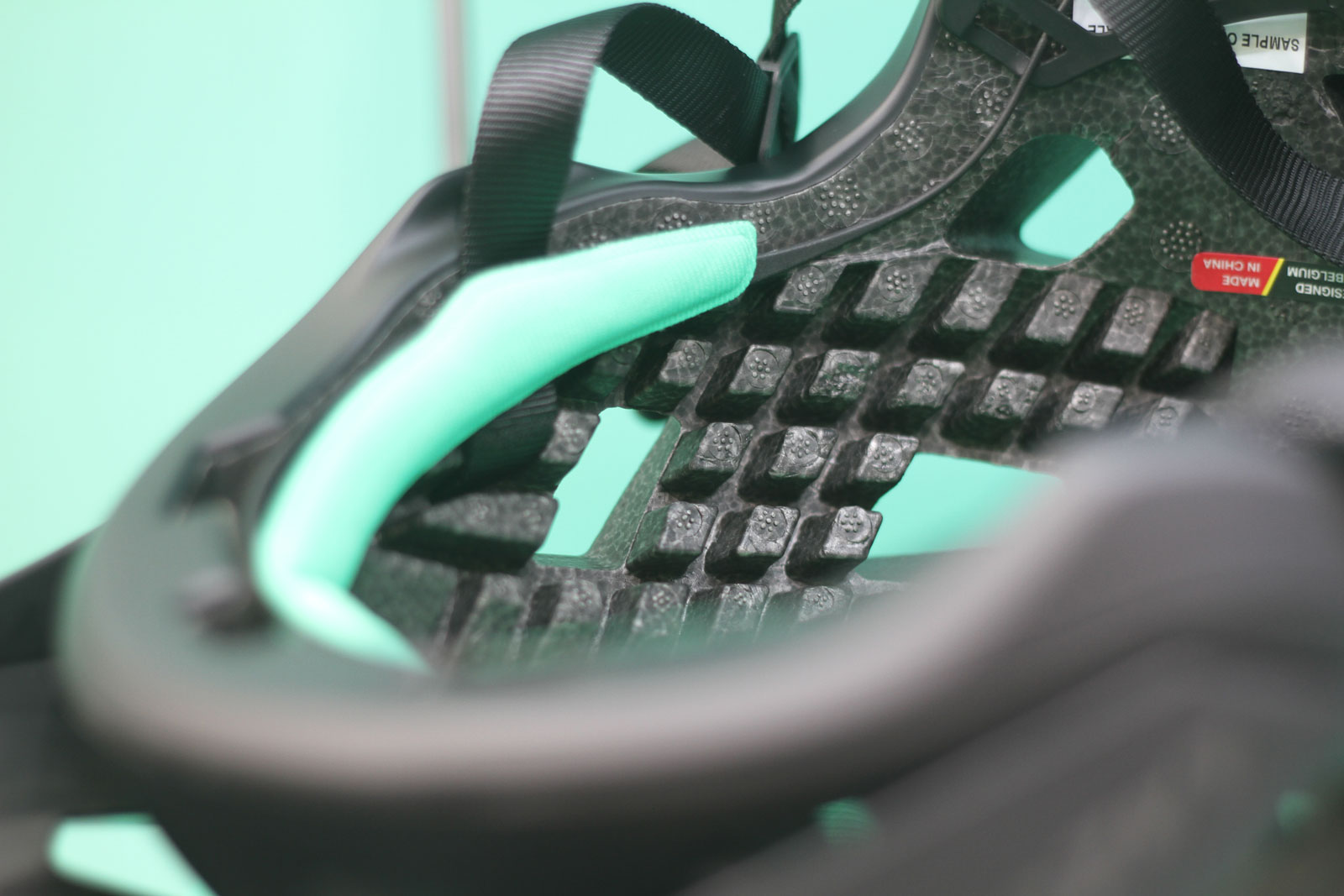 We covered Lazer’s KinetiCore technology in great detail previously, and tested the more aggressive Jackal KinetiCore. One of its major benefits is the increased airflow permitted by the channels formed between blocks of EPS.

The Coyote KinetiCore MTB helmet gets a Fidlock buckle at the chin strap, with adjustable cam dividers, and a dial at the rear to cinch up the retention system. There is also a vertical position adjustment, too. This one will have an MSRP €99.99 /$109.99 and will be available around Dec’22-Jan’23. 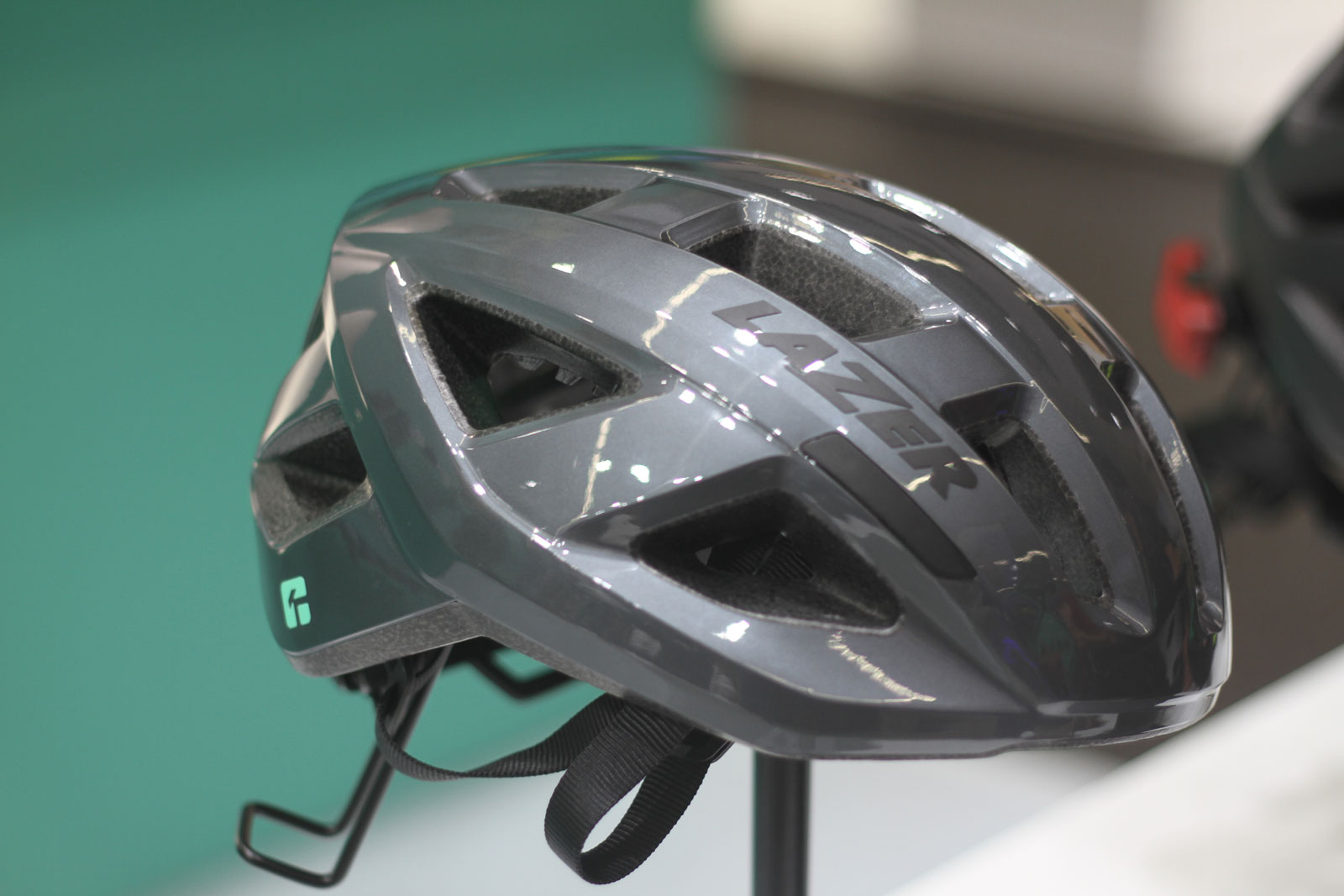 The Lazer Tonic Road Helmet is also set to benefit from KinetiCore. It replaces the current Tonic MIPS offering. It gets a 4-Star rating from Virginia Tech with a design that maximizes air flow. This one weighs a claimed 280g in size medium. This one will retail at 80€ and is due by the end of 2022. 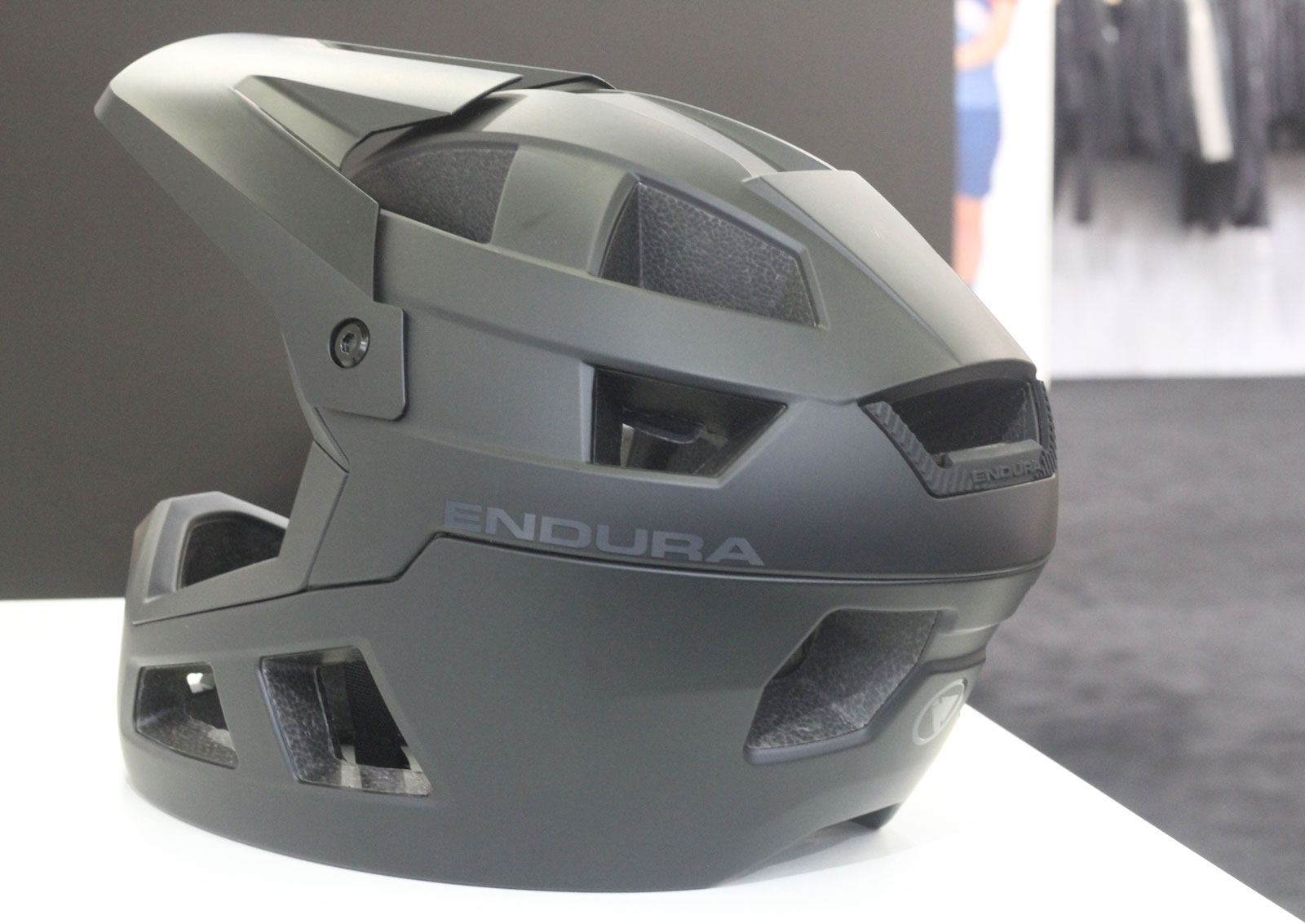 The new Endura Singletrack MIPS Full Face Helmet is their more budget-friendly offering, coming in well under the price of their top-level MT500 Full Face Helmet at £149.99, owing to the lack of Koroyd protection. There is a non-MIPS version too, even more affordable at £129.99. Both meet CE Standard EN1078:2012 + 1 A1:2012 safety standards, as well as the ASTM requirement for downhill mountain biking.

A Youth version is in the works, too. It will be available in Olive Camo and Grey Camo colorways at £109.99. All the Endura Singletrack Full Face Helmets have a lightweight in-mold construction with plenty of vents to encourage airflow. They have a fast-wicking comfort liner that can be removed for washing, and a goggle-friendly design with a gripper at the rear to prevent the strap wandering. 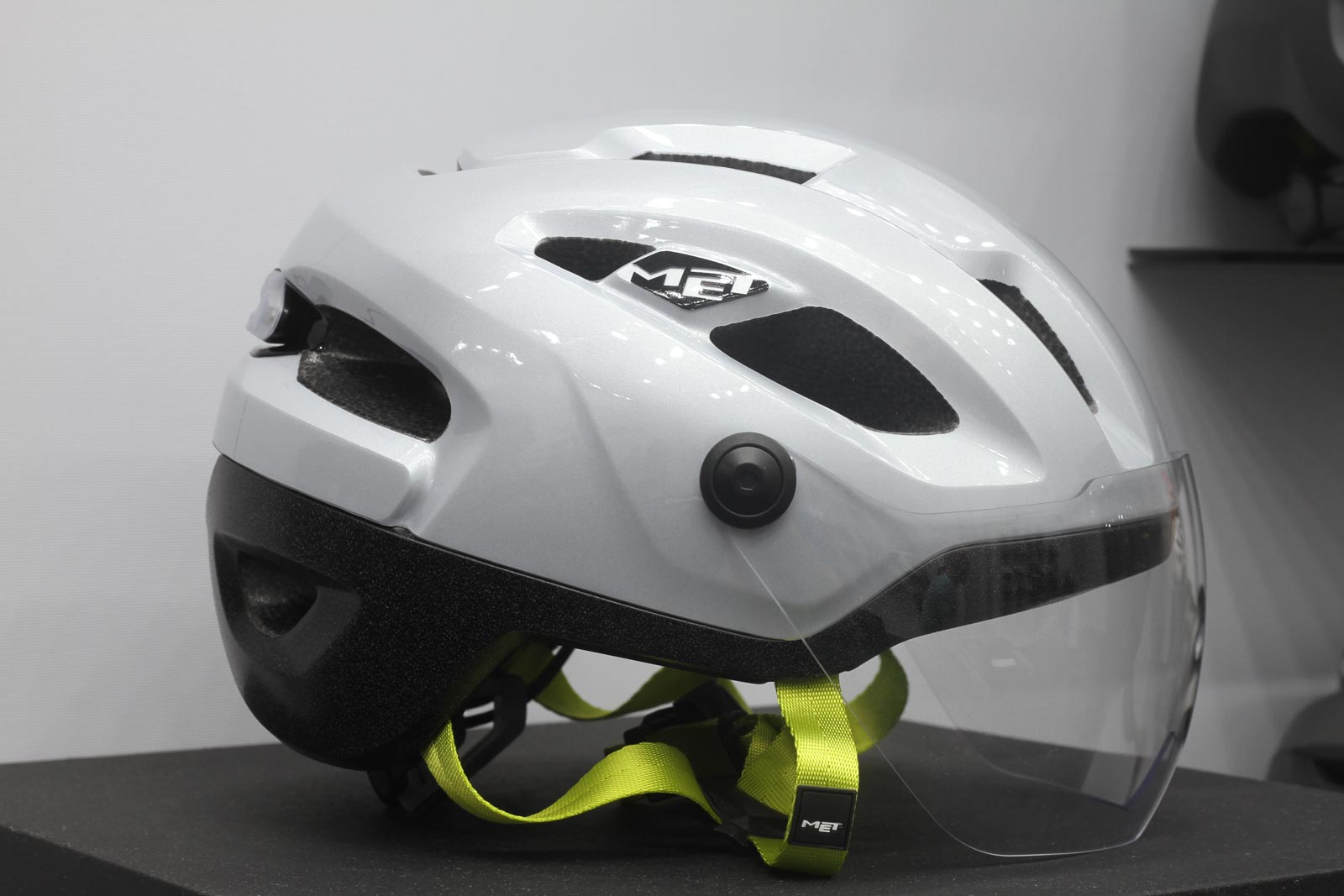 MET gave us a preview of their soon-to-be released Intercity helmet for urban riding. This one is NTA Certified, meaning it is rated as safe for eBike riding. The speeds that can be regularly sustained by an eBikes are higher than those that most riders sustain on regular bikes, and the NTA certification process, developed in Holland, reflects the bigger impacts that might occur when eBike riding.

The light is mounted high on the back of the helmet so it is not occluded from view in winter when the wearer has a scarf on, or a hoody

The MET Intercity thus offers extra protection over their urban helmets developed for regular bikes. Some cool features include a magnetically mounted rear light with three different blinking modes, a visor that is sold with the helmet, a magnetic Fidlock chin strap buckle, a MIPS liner for extra protection from the perils of rotational impacts, and an insect net at the front vents to prevent flying critters getting caught in the helmet. The vents transition into channels inside the body of the helmet to help with airflow and heat/sweat management. 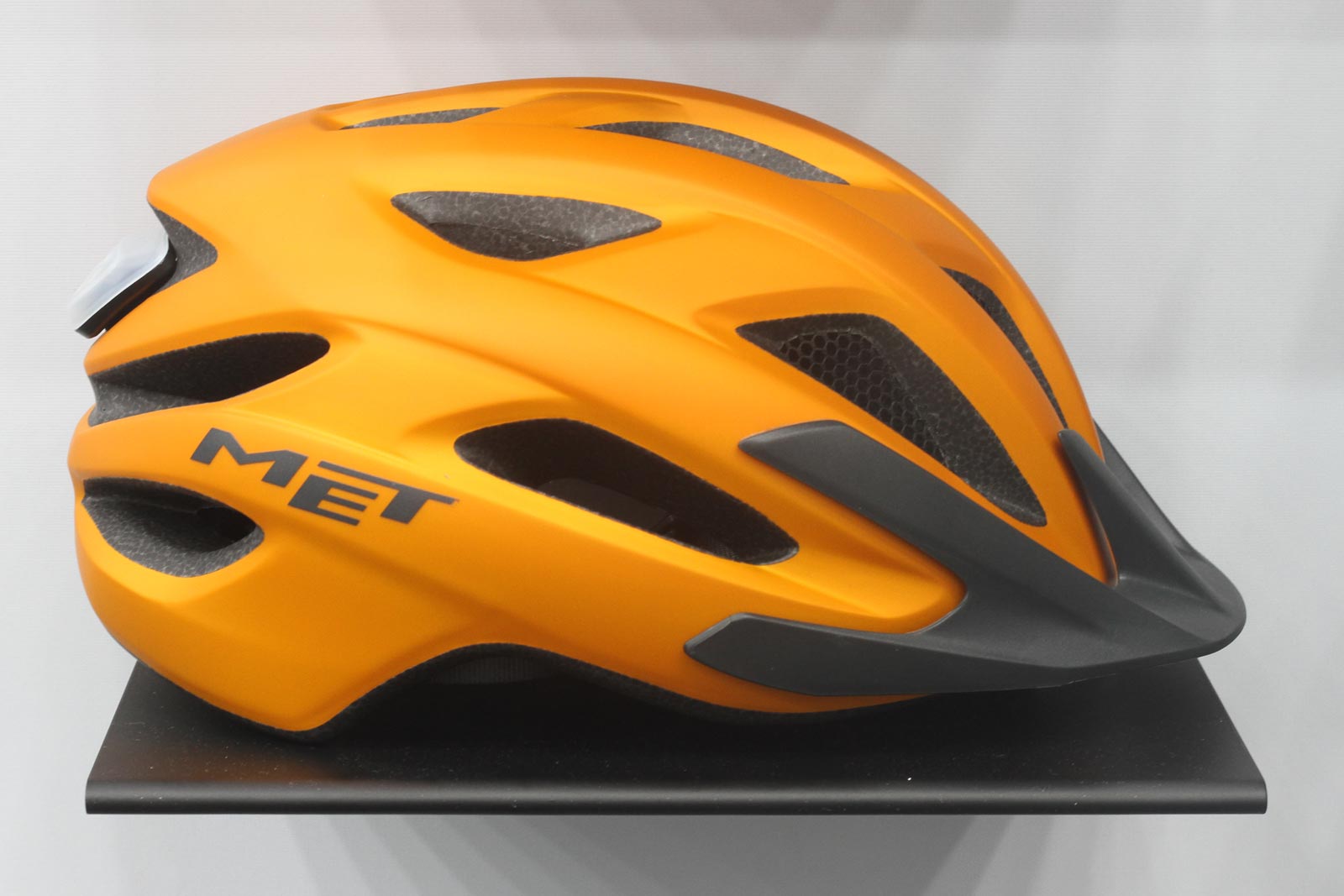 MET also had their do-it-all helmet, the Crossover; a budget option lid aimed at riders who want one helmet that, well, does it all. Commute with it during the working week, then take it to the trail center at the weekend for a spot of singletrack riding. MET say it is a helmet for people who enjoy cycling casually. 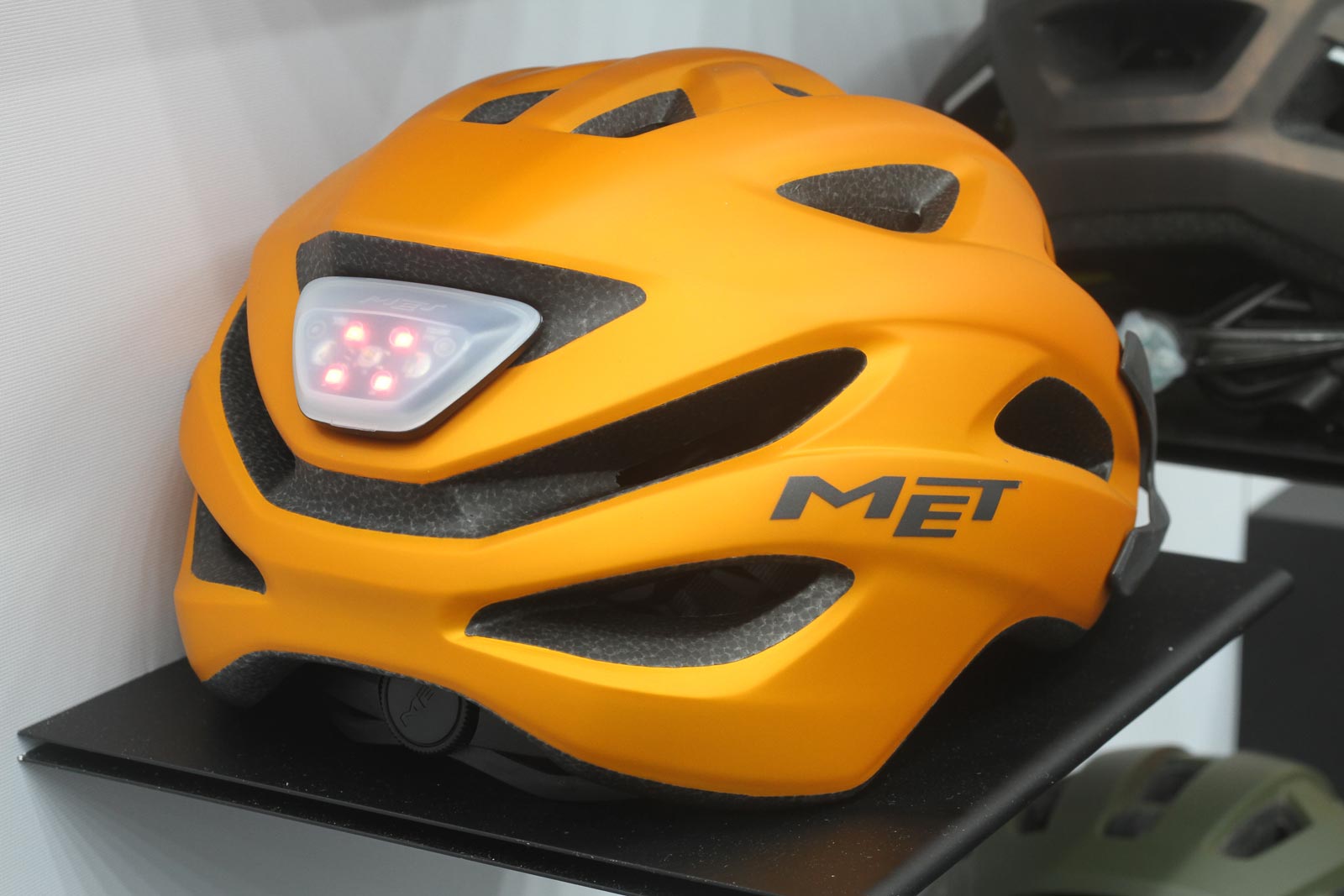 The latest version of the MET Crossover has an entry-level MIPS liner, a magnetic rear light that is removable, a removable visor, and an insect net – seemingly a no-brainer for any cyclists with severe allergies to stinging insects. 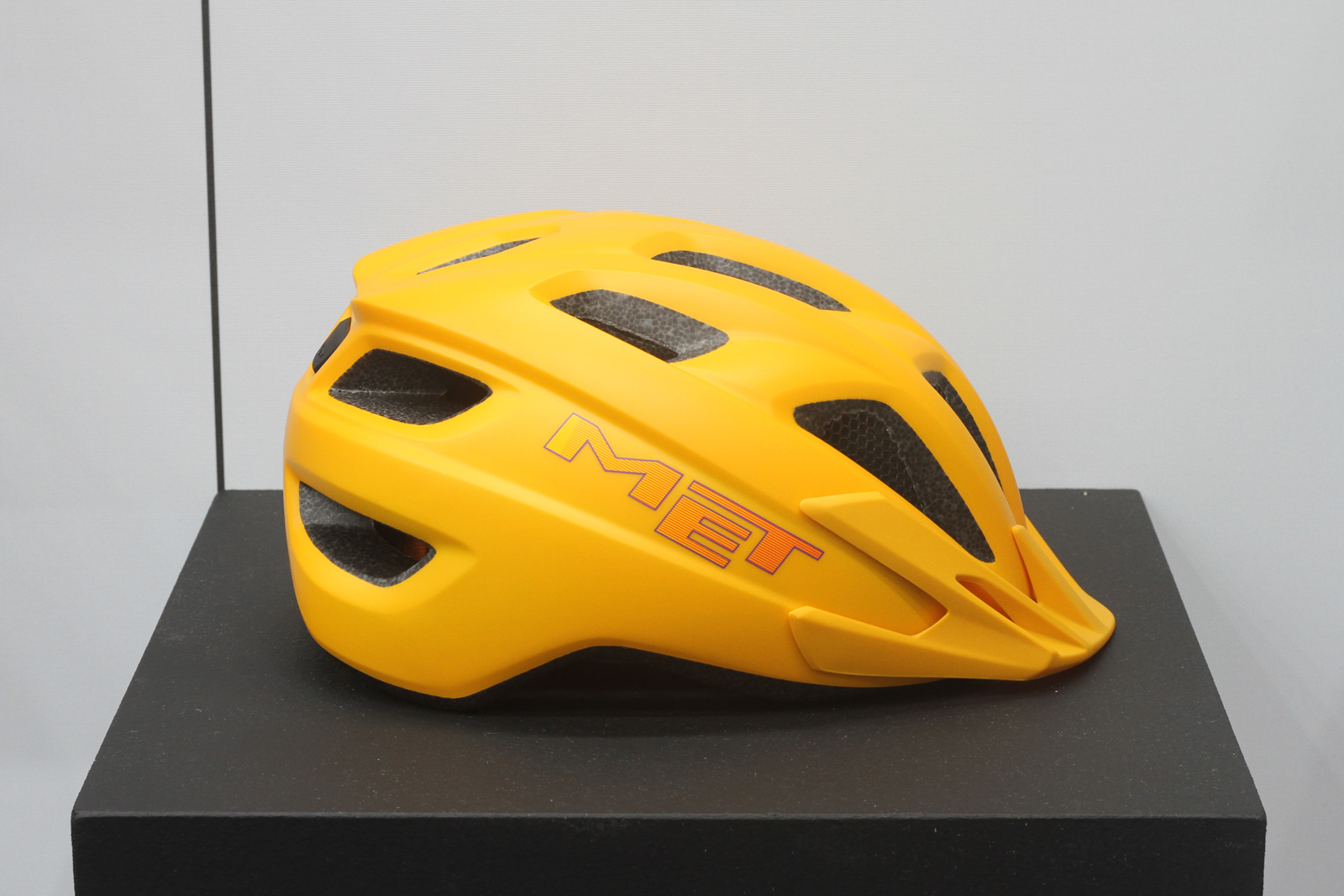 MET were also showing their range of new kids’ helmets. This one is the Crackerjack, with a removable visor that gives it more of a mountain biking aesthetic, though it lacks the coverage of the MET Eldar helmet more aimed at children who are pushing on with their mountain bike skills. It too gets a rear light, though it sits lower down and is integrated into the retention system. It also has netting over the vents at the front to stop critters getting in and causing drama. 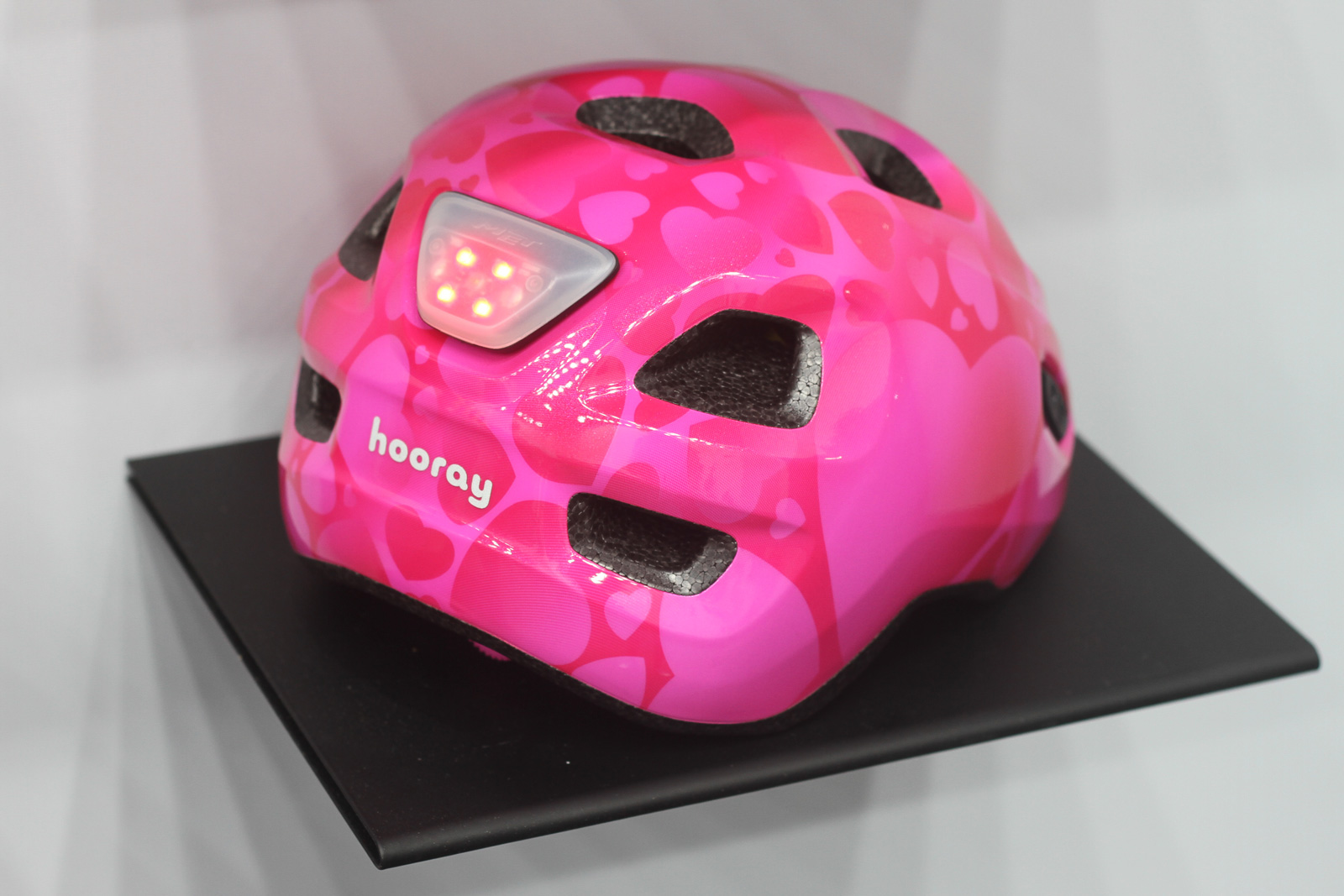 The toddler helmet was on display, too. The MET Hooray was launched a few weeks ago, but is worth mentioning here nevertheless. It is constructed in such a way as, no matter which angle an impact comes from, the helmet never actually puts pressure against the child’s fontanel region of the skull – the bit that remains soft up until the age of two. 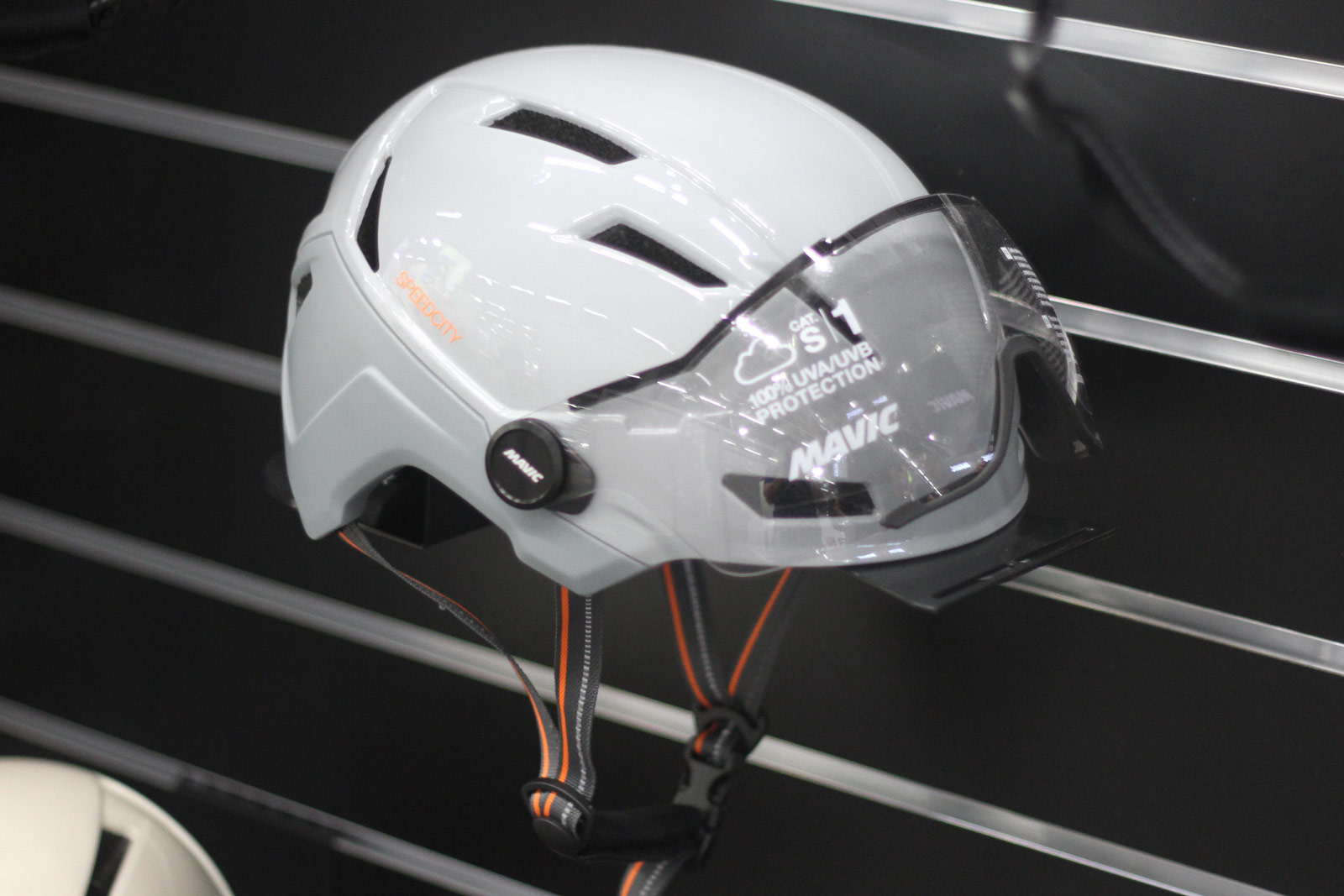 Mavic were showing their latest offering for the cycle commuter, too. It has an integrated visor with UVA/UVB protection which is removable. It has a lip seal at the top that stops water from running down the front of the helmet. The Mavic Speedcity is a versatile helmet for which there are two liners available – a summer liner and a winter liner.

The chain straps include a reflective yarn to add some visibility. As for protection, the Speedcity mainly relies on the hard plastic shell and the single-density EPS foam.

Updated Kineticore version of the Lazer Tonic looking real nice! The outgoing helmet looked premium but sold at a surprisingly friendly price point. Despite a price bump, 80 euros for the new one is still quite good.