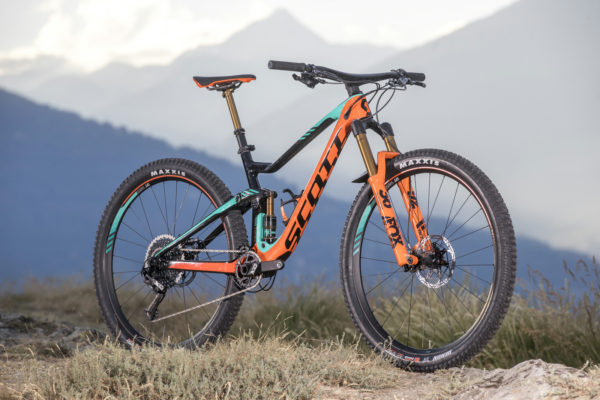 Following the lead of the 2017 Scott Spark, Scott’s genius is all new for 2018. That means it has a completely redesigned suspension system that allows the bike to take advantage of the latest shock technology. But it also means that Scott has been able to create a bike with new geometry and a way to incorporate both 27.5″ and 29″ wheels in to the same frame without changing the fork… 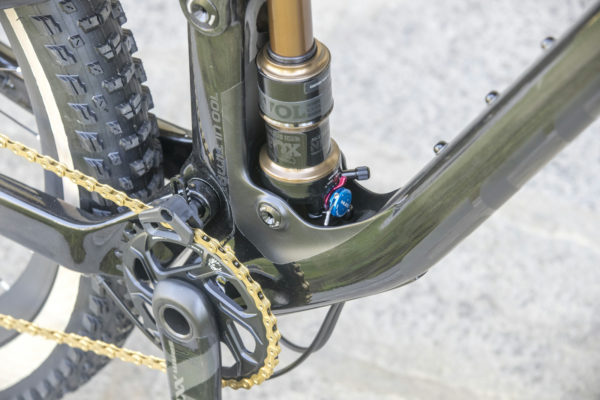 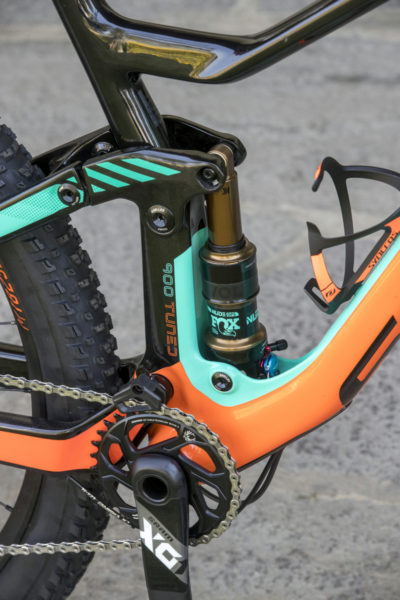 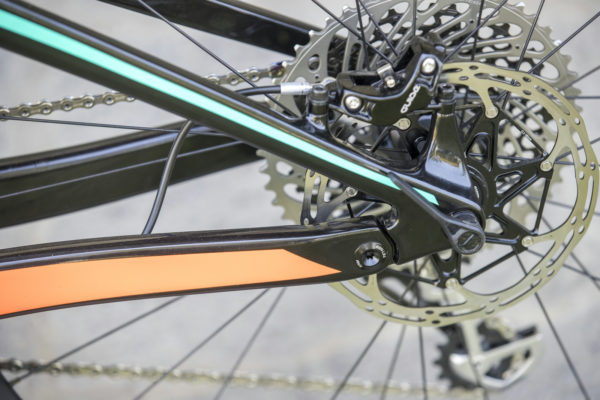 Building on a long history of a bike designed for both climbing up and bombing down, the new Genius completely relocates the shock but keeps the Virtual 4 Link TwinLoc suspension system to offer what Scott considers the best of both worlds. Relocating the shock allows for the use of a trunnion mounted rear shock mounted upside down. This arrangement allows the shock forces to be directed into the already stiff bottom bracket cluster which allows the top tube to be constructed with less reinforcement. This construction seems to echo what we’ve seen on the road side with a stiff “backbone” of the head tube, down tube, BB, and chainstay, while the top tube, seat tube, and seat stays can be built to be more compliant. Claimed weight for a frame shock and hardware (unspecified size) is 2249g. 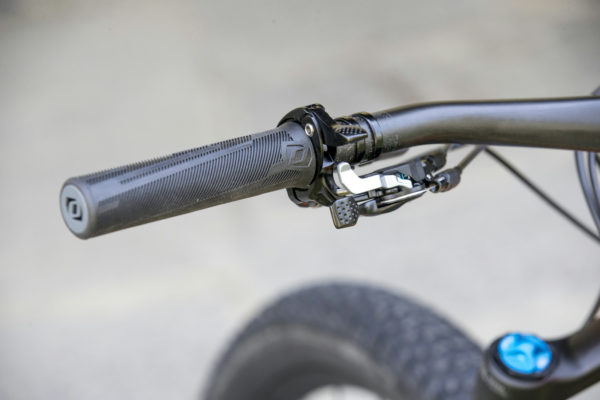 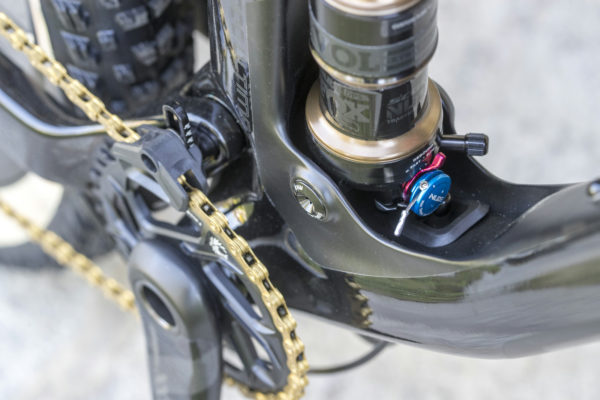 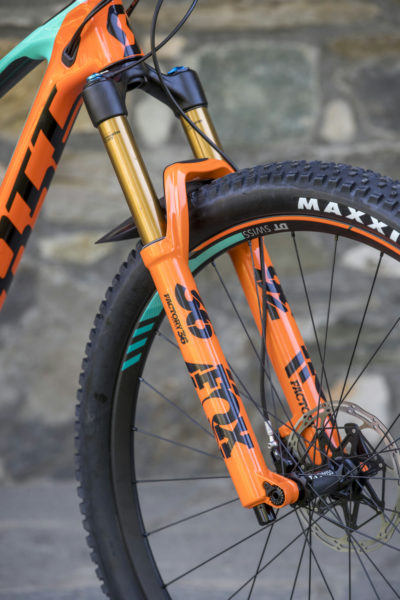 Keeping the TwinLoc design equates to a suspension that is quite different with the push of a lever. In Descend mode, the bike makes full use of the 150mm of rear travel with all of the air chambers on the Fox Evol air can open for use. One click of the new TwinLoc lever gets you to Traction Control mode which not only drops the travel to 110mm, but also adjusts the damping and makes the bike ride higher for a more pedal friendly riding position. The last click gets you to a full lockout mode for road or flat transitions. Obviously, TwinLoc refers to the fact that with one lever you’re changing the settings on both the shock and the fork to keep lever and button pushing to a minimum – though there is a third lever on the TwinLoc system for use of the Fox Transfer dropper post. 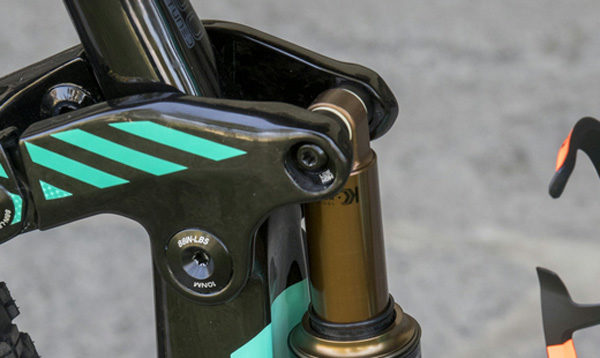 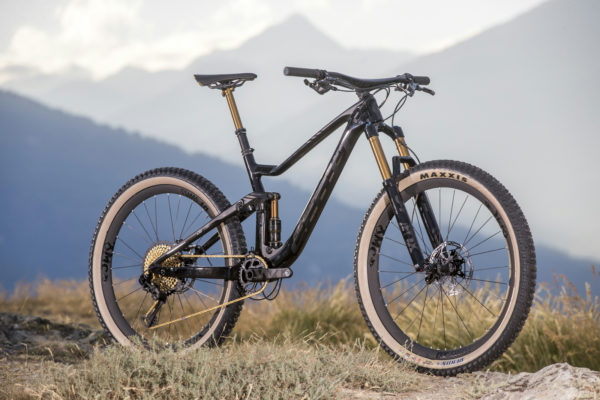 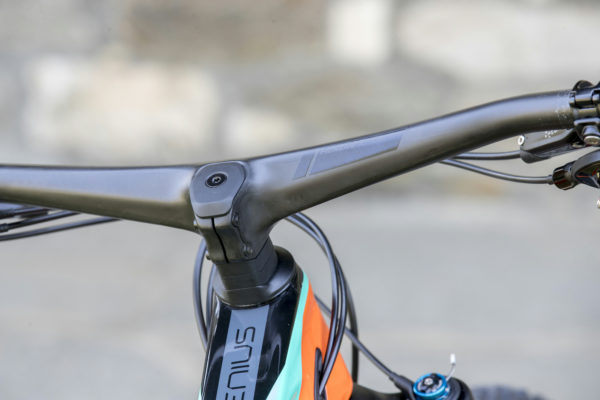 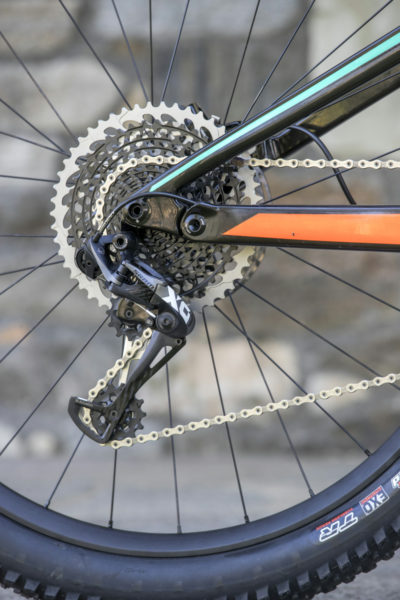 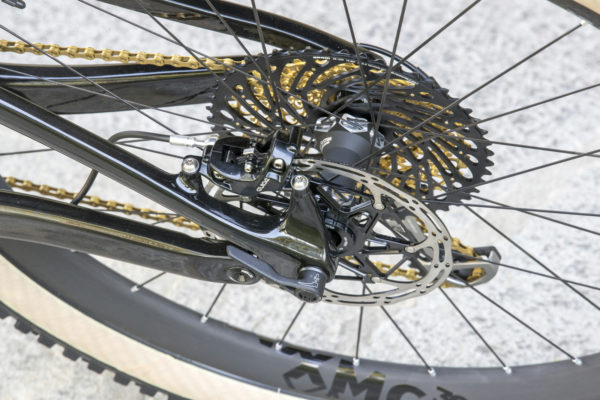 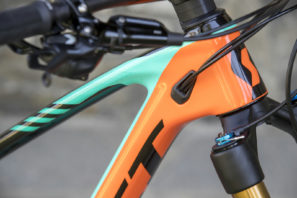 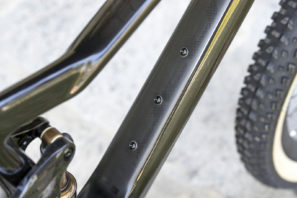 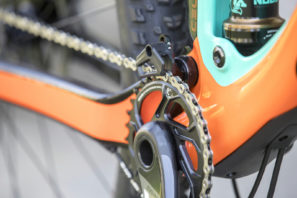 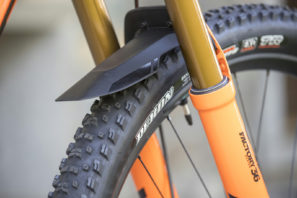 Detail wise, the Genius uses a new internal cable routing system to work with mechanical or electronic drivetrains including a frame protector on the downtube which serves as a housing for the Di2 battery. There’s an integrated chain guide that mounts to the main pivot nut for a light weight approach to chain security, as well as third bottle braze on for the downtube for increased flexibility in mounting accessories.

Syncros also has a few new parts that are featured on the new Genius like their one-piece Hixon iC bar and stem, and the Trail Fender. The Hixon iC is said to be the strongest bar in their line up, as well as being super light at just 290g – which obviously includes the stem in that number. Stem length isn’t listed, but the bars are 760mm wide with a 12mm rise and 9° sweep. The Trail Fender is one of the first we’ve seen that will take advantage of those threaded holes on the back of your Fox fork and uses a 2 bolt direct mount interface that is designed to clear the fork crown and tire on bottom out. Compatible with Fox 34 and 36 Boost forks, the rigid plastic fender should provide some spray protection, though the cutouts on the sides make it look like it won’t provide the same protection for the fork seals that we’ve come to love from simple plastic mud guards. 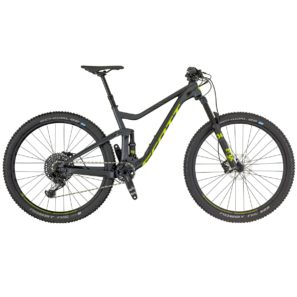 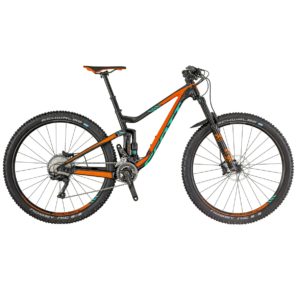 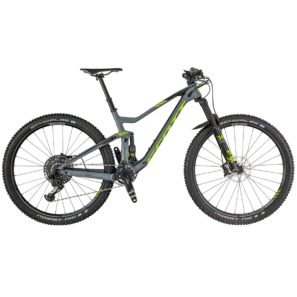 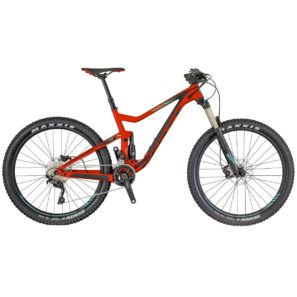 Offered in seven different build levels, five of those are available in both 27.5 x 2.8″ tires or 29 x 2.6″, while the remaining two are 27.5 x 2.8″. Notably, there aren’t any completes with “starndard” 27.5″ tires, only plus. The 29″ versions are almost the same story, though they opt for middle ground 2.6″ rubber which seems to be gaining in popularity. For pricing and availability, check with your local Scott dealer. 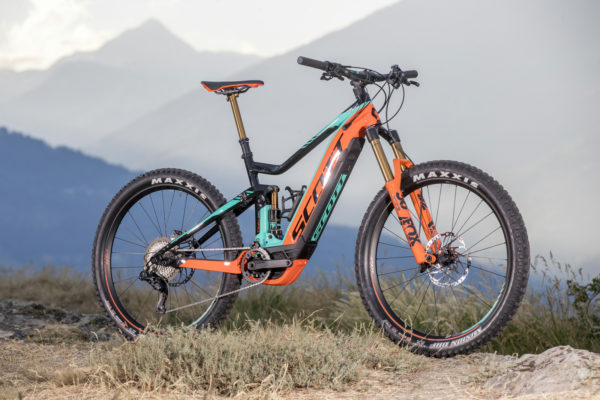 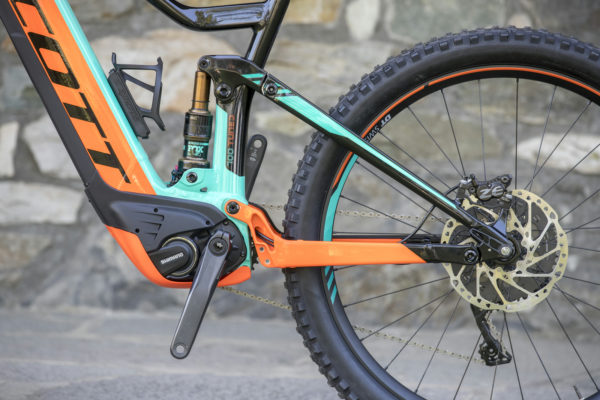 Yes, there will also be an E-Genius model, though this one won’t be coming to America. Developed to take advantage of the Shimano Steps E-8000 system, the E-Genius uses a similar 150mm travel TwinLoc suspension design. Just like the regular Genius, a flip chip allows the frame to adapt to 27.5 or 29″ wheels depending on the build. If you’re wondering who e-bikes are being marketed to, the inclusion of a kickstand mount on the chainstay should tell you something. Though, many motorcycles have kickstands too. Available in five builds, including a Contessa women’s model, only one of the models will be sold complete with 29 x 2.6 tires, all of the rest will come stock with 27.5 x 2.8″.

Not only will all these e-bikes riders be going faster than they know how to ride, crash and get all our trails closed. But I might even now be poked in the eye with one of their kickstands as they speed past on their cheater bikes.

Oh, they dig ebikes for some reason too.

The cable routing under the BB looks funky

I like that handlebar, but not the frame colours. I also immediately noticed the cables under the BB…

And if it’s like my 17 Spark (pretty sure it is) you must leave 1.5″ or so of slack cable under the bottom bracket so as not to bind when suspension moves. Hopefully, they figured out the chain retainer. Apparently the maker of that part doesn’t get Boost spacing and is designed for a chainring that sits farther outboard and thus rubs on the larger half of the cassette (if you attempt to leave it installed).

awesome! Scott are making some very desirable bikes in MY 2017 /18

“Yes, there will also be an E-Genius model, though this one won’t be coming to America.” It wont be on your trails in the US

Augh – Bike Rumor tricked me into clicking on a post that contains an e-bike.

Horst link suspension is pretty new for scott, worth mentioning at least. It should improve the suspension sensitivity a bit

Scott used Horst Links for many years. I think I have a 2003 (maybe 2004?) Genius with a Horst Link rear on it, and by then Scott had been using it for quite a while. Somewhere around that time, Scott decided to bring their MTB’s to the US & then faced the wrath of Specialized’s lawyers, which canceled that generation Genius’ intro to the US.

Good to see them return to Horst Links though.

I had a 2013 Genius 940 and I have to say it had one of my favorite colorways/graphics ever on a bike I’ve owned. There was an off year there when they tried to cheap out and the bikes were ugly (’14?) but otherwise I really have to commend Scott on putting out some good looking rigs year after year. Really dig their clothing too!
Also happy to see that for 2018 2.6 rubber is finally going to be a more common thing. I may have to swing into my local dealer and give them a bit more consideration this season.