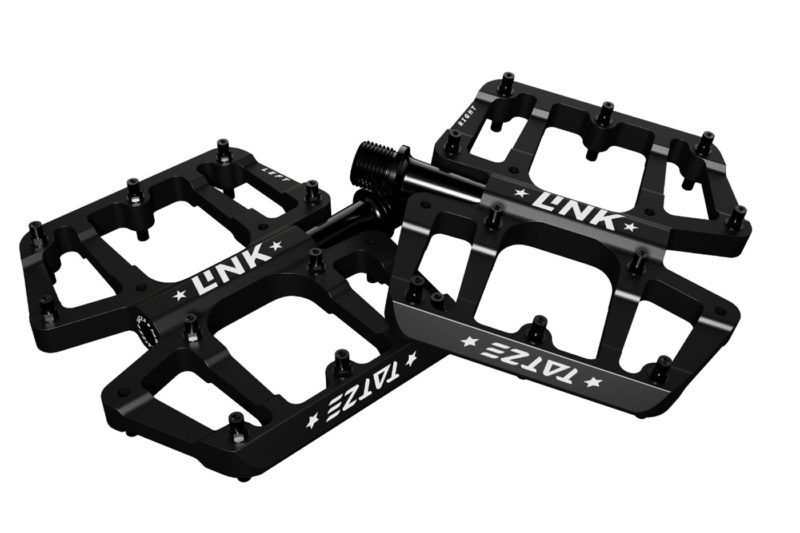 Tatze Bike Components have a new super thin flat pedal for mountain biking, the TATZE LINK. At just 8.8mm thick at the outside edge, the LINK pedal is due to be one of the thinnest MTB pedals ever to have made it to market. It’s svelte profile makes it pretty lightweight, too, weighing a claimed 343g for the standard version, and an ultralight 298g for the titanium axle version. Here’s what we know so far.

This is not the thinnest flat pedal we’ve seen from Tatze. A few years ago at Eurobike, they showed the Tatze Blade which had an incredibly thin outside edge of just 3mm. That was only possible using a design wherein the pedal bearing was integrated into a custom crank arm, the so-called Tatze Integral Standard. For reasons we may only hypothesize on, the Blade never actually made it to market. It may be because you couldn’t run them on a standard crank, a reason why FlyPaper pedals never quite made it. 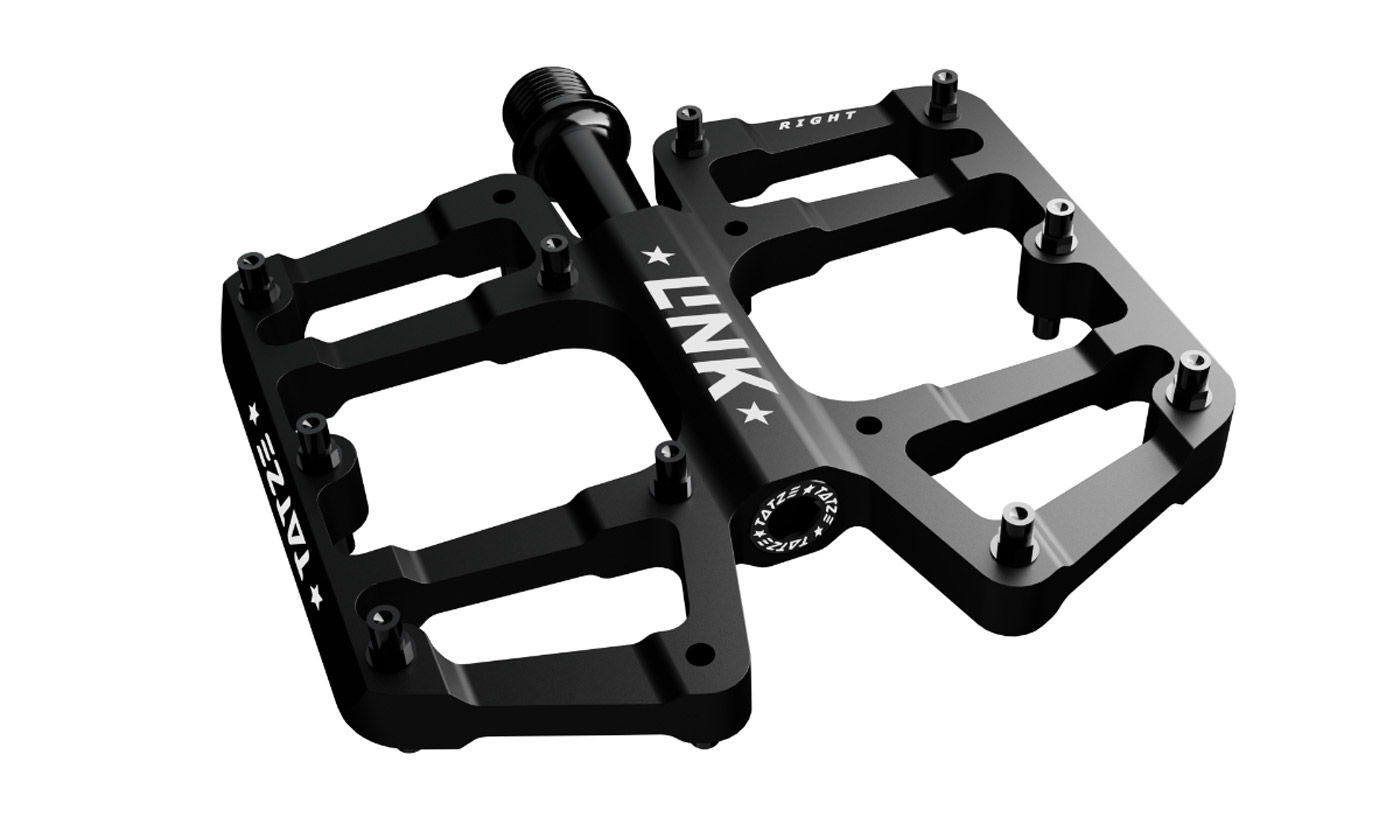 Moving on, Tatze will be bringing an 8.8mm thick pedal to market in March 2022; the Tatze LINK. This one doesn’t require a custom crank, with all the usual internals housed inside the pedal body itself. That includes the axle (steel or titanium), two inboard bearings, an IGUS JSM bushing and a double seal on the outboard side. This central area is of course thicker than 8.8mm, but the 10 traction pins that thread into the pedal body stand clear of the relatively enlarged central portion that houses the internals. 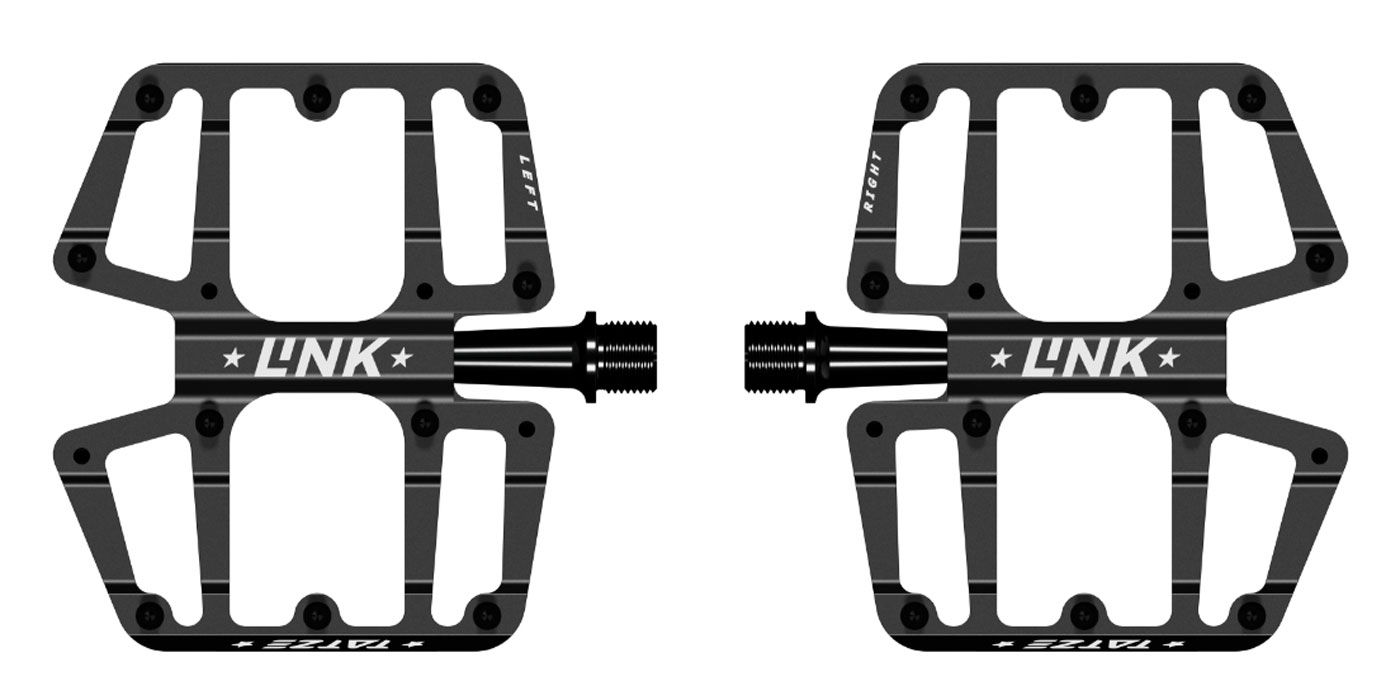 The open design of the platform is said to be good for mud clearance, allowing it to fall through the holes

The pedal body itself is made up of 6061-T6 aluminium. The platform is said to be slightly concave, measuring 99mm across and 113mm from front to back. While the outside edge is just 8.8mm thick, the edges at the front and rear of the pedal are slightly thinker at 9.9mm. The Tatze LINK will ship with 10 pins installed in each side, but there are an additional 4 holes for riders who feel the need to run up to 14 pins on each side. The pins themselves are 6mm tall and 3.6mm in diameter.

The pins positioned in the central region are lower in height than those at the edge, helping to create a concave contact point with the shoe

The new pedal, deigned and tested in Tyrol, Austria, is said to be designed for “performance-oriented enduro and downhill riders”. As one of the thinnest pedals on the market, the Tatze LINK may be an attractive option for bikes with a very low bottom bracket, like many eMTBs that tend to rely on running shorter 165mm crank arms for additional ground clearance.

The Tatze LINK will be available with a steel axle and a titanium axle, priced at €145 and €229, respectively, each supplied with 40 spare pins. Replacement bushings, bearings and seals will be available too. Tatze say the pedal can be serviced up to 5 times.

They’ve dimensioned arbitrary points on the pedal to make a wild claim, this is so ridiculous. What will matter is the central part with “LINK” written on it, which looks to be about 14mm thick. Still very respectable but nothing special.

Just like the comment above, this is a ridiculous press release – its a 14-15mm thick pedal, not an 8mm thick one, your foot will just sit on the raised section over the axle.

You could make a 2mm thick pedal using this design, but it would be useless.

This pedal may work OK, but this kind of claim just makes the brand look like snake oil salesmen.