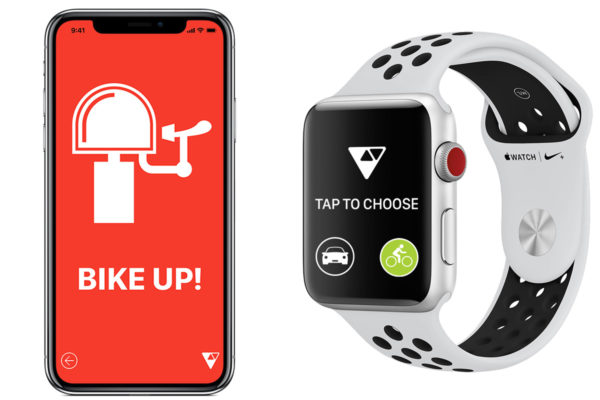 We recently reported on the new Front Assist feature from SEAT – an automatic braking feature designed to protect cyclists from a rear-end collision. That’s awesome that it’s being added to new vehicles, but what about the countless vehicles already on the road without that tech? Well, once the Noroc app gets off the ground, motorists would at least have a heads up when it comes to cyclists on the roads… 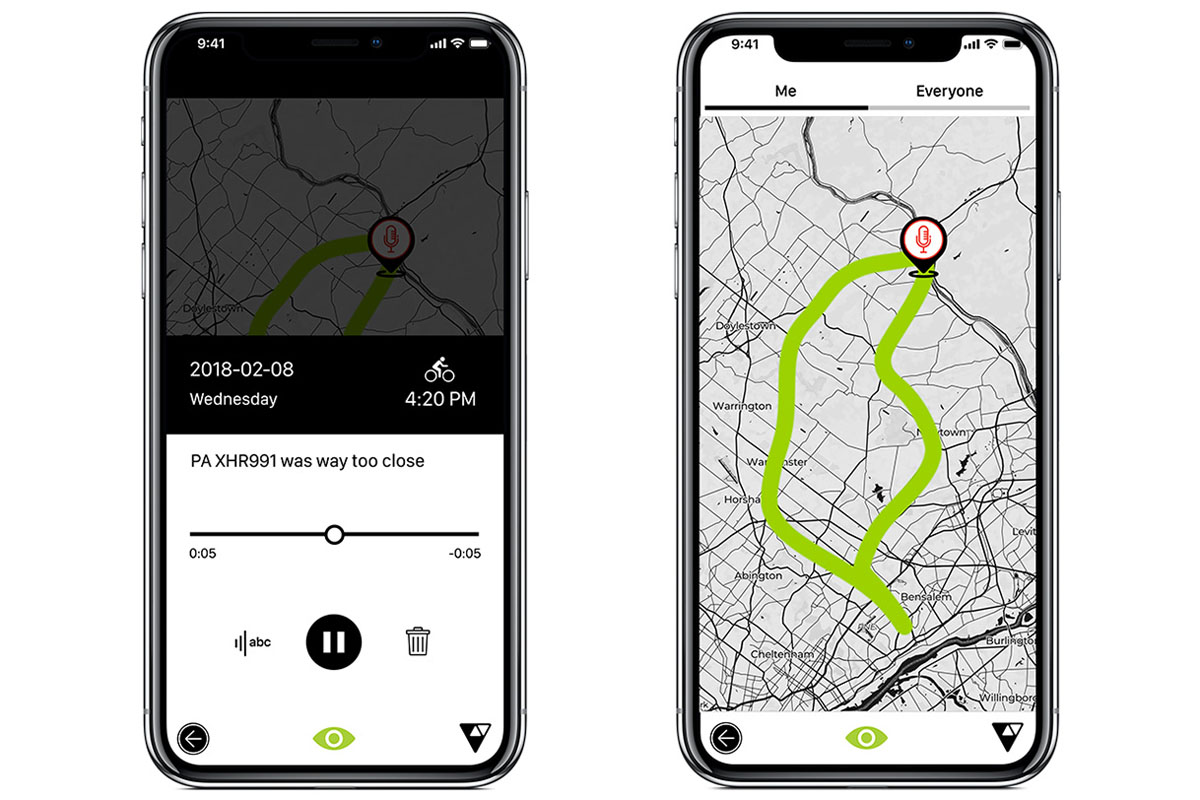 Even if motorists never pick up the app, Noroc will have some interesting features. The development team imagines an app based tracking system that will allow the Noroc community to see your whereabouts during the ride. This will allow other members to potentially check on you if you stop moving, but it will also communicate directly with any motorist who also has the app. The idea being that the app will detect your presence on the road ahead and then send an audible and visual warning to the driver that there is a cyclists on the road.

The initial hope would be that many drivers would be running the app, so that every cyclist who also used the app would be better protected. But, relying on drivers themselves to run the app every time they take a trip is a tall order – so the Noroc team is building the app to be able to be integrated directly into vehicles. That way, the car itself would do all the work and provide the notification through something like the navigation system. 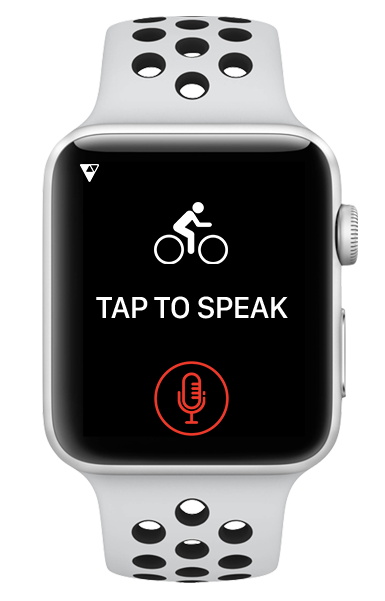 Cyclists will also be able to use the app to document they license plates of less than courteous drivers, as well as road hazards like potholes. The easiest way to do so would be through voice control through your Apple watch, though you can do it directly through the app on your phone as well. Initially the app will be available for iOS, quickly followed by a version for Android – both expected around the April/May time frame. 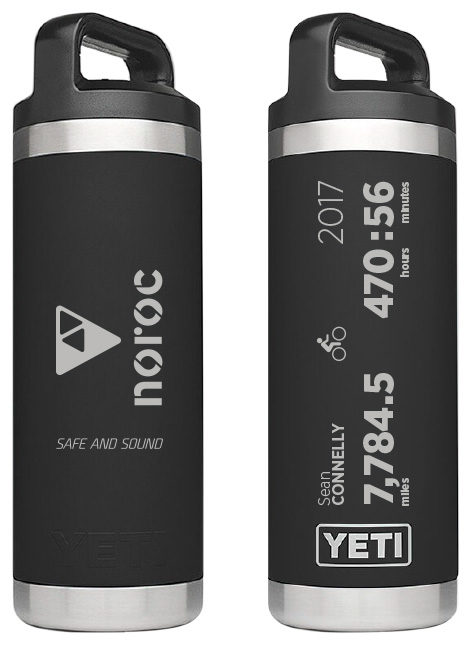 In the mean time, Noroc is getting folks excited about their upcoming release with custom Yeti bottles. If you have some Strava metrics worthy of immortality on a Yeti bottle, Noroc will personalize a Yeti for you. Just send them $99 and your Strava ID.

So instead of just not running into cyclists because you are paying attention and a competent driver, they expect drivers who are neither of those things to run an app and then watch it while driving so they don’t hit people. this sounds like a last minute effort to win the stupidest idea of 2018 award. There is a saying that is more true now and getting true by the minute. You can’t fix stupid. No tech will ever un-stupid humans. Humans will just learn to circumvent any safe guard and still do stupid things. I mean how hard is it really to not hit someone riding a bike? all this stuff does is enable people to be bad drivers cause they can rely on these crutches and not actually have to think for themselves. Classic example, instead of people not touching their phone while driving, Subaru now has a feature that will alert you when the car ahead of you pulls away from a light so you can look up from your phone and drive away. That way you wont sit there like a moron staring at your phone while your light is green. way to reinforce phone usage Subaru.

Front end collision detection systems with automatic braking reduce collisions significantly. Tech doesn’t make people less stupid but it can and does protect people from that stupidity. Any assertion otherwise ignores evidence and falls into “Grumpy old man yells at cloud” territory. On that subject, stupidity is one thing but honest accidents are another and don’t come with the moral judgement that some people try to infuse into the discussion. So even if somebody isn’t “stupid” then tech can just help prevent something bad from happening.

Delusional. Not a chance I, as a cyclist would run this app, even less a chance that a non-cyclist would take the time to run the app (more over, if forced it only ANGERS them. As proven for decades, you cant successfully legislate behavior).

I suppose expecting something, anything to be in the road every time I drive is out of the question. Almost as silly as State Farm wanting me to install a GPS car sensor in any of my cars. Um, not a chance.

Simply, this (and the dumb “SEAT” thing will solve nothing).

Need to get integration into Google maps (i.e. Waze) so a cyclist on the road up ahead would be treated like anything else that you should be careful about

So now cyclists have to buy and wear a special watch in order for cars to not hit them?

Nice – it can pop up an alert while they’re texting to let them know what the “thump” was.

So I’m split.
On one hand, if people just pay attention and are courteous, cyclist wouldn’t be hit (I’ve driven extensively in “bike heavy” environment and have been surprised by a cyclist or come close to hitting one).
On the other hand, history has proven most people don’t care. Our driver’s training, licensing, on-going education and punishment (for actual unsafe behavior, not just our speed centric ticketing) are too lax. The first three are most important, and probably the three most people don’t care to invest in. In the US at least, driving for all intents, is a right.
So, I don’t think this app/tech is a great application. But I do think a universal requirement, such as the one requiring back-up cameras, for sensors that alert drivers to a cyclists presence is ultimately needed (when the tech is there, although I think it already is)

That said, most important is for our society (US) is to value cycling and invest in safe infrastructure so that more and more people feel safe riding. Large, protected bikeways. Safe parking. Changing facilities at business (tax credit it). The more people that bike, the more people will drive safely around cyclist because of all the drivers I know, the ones that are more likely to be courteous, are also cyclists.
The others seem to often think the litmus test of a safe pass is they didn’t hit the cyclist, regardless of how close/fast or what it caused the cyclist to do (think car passes, then right hooks you…you slam on the brakes…they never know that and its essentially out of sight out of mind)

I don’t own a smartphone and never will. So does that mean it will be okay in the future for motorists to run over me?

I can see how if one abandons all critical thinking that one might come to such a conclusion.

Hey, if it decreases the chances of a cyclist getting hit, I’m all for it.

But on the other hand, if it DID become widespread, would it lead to drivers being even less attentive to their actual surroundings, relying on their safety blankie app to not run over the rest of us?

Pretty uncool to make it even more dangerous for those of us who won’t be riding around with the app running.

I ride a motorcycle too, and I can tell you I’ve been almost merged into plenty of times, including a few where I’ve been looking right at the “hey dummy, don’t move over, there’s something in your blind spot” light in their mirror… but they weren’t even glancing over enough to notice the big amber light in their mirror.

Unfortunately, the suggestion that this might make things more dangerous isn’t supported by any facts since we don’t know exactly how it would be implemented in a car’s mapping/routing system.

Try to read past the first sentence, seriously.

The app has nothing to do with front end collision detection or automatic braking. It’s an app that motorists have to install on their phone to warn them of cyclists on the road ahead. Or rather, only cyclists who also have the app installed. So

The more I see things like this, the more, like this (and things such as Strava) are not in my life. If “they” can track you, they WILL track you (just ask US Special Forces). Um, not me. Far too many lemmings handing their personal liberties and behaviors to strangers to study and market to.