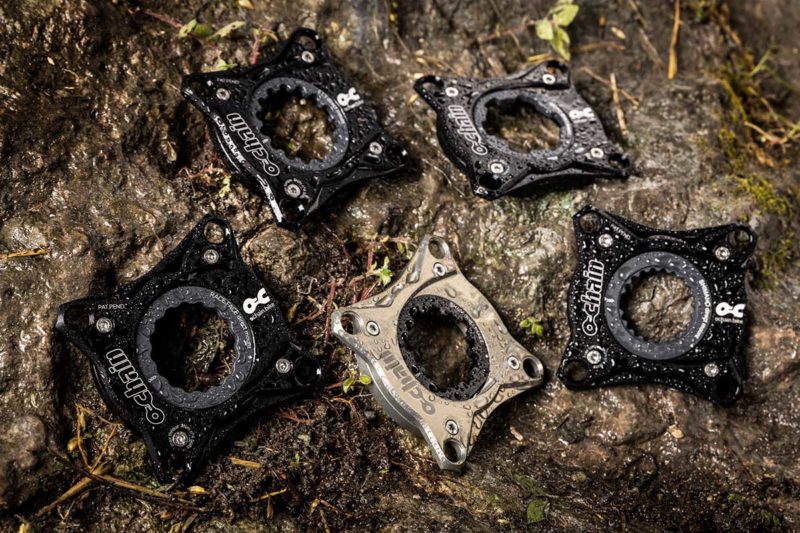 So, how does their Ochain Active Spider solve this problem? Read on, shredders…

What is the Ochain Active Spider? 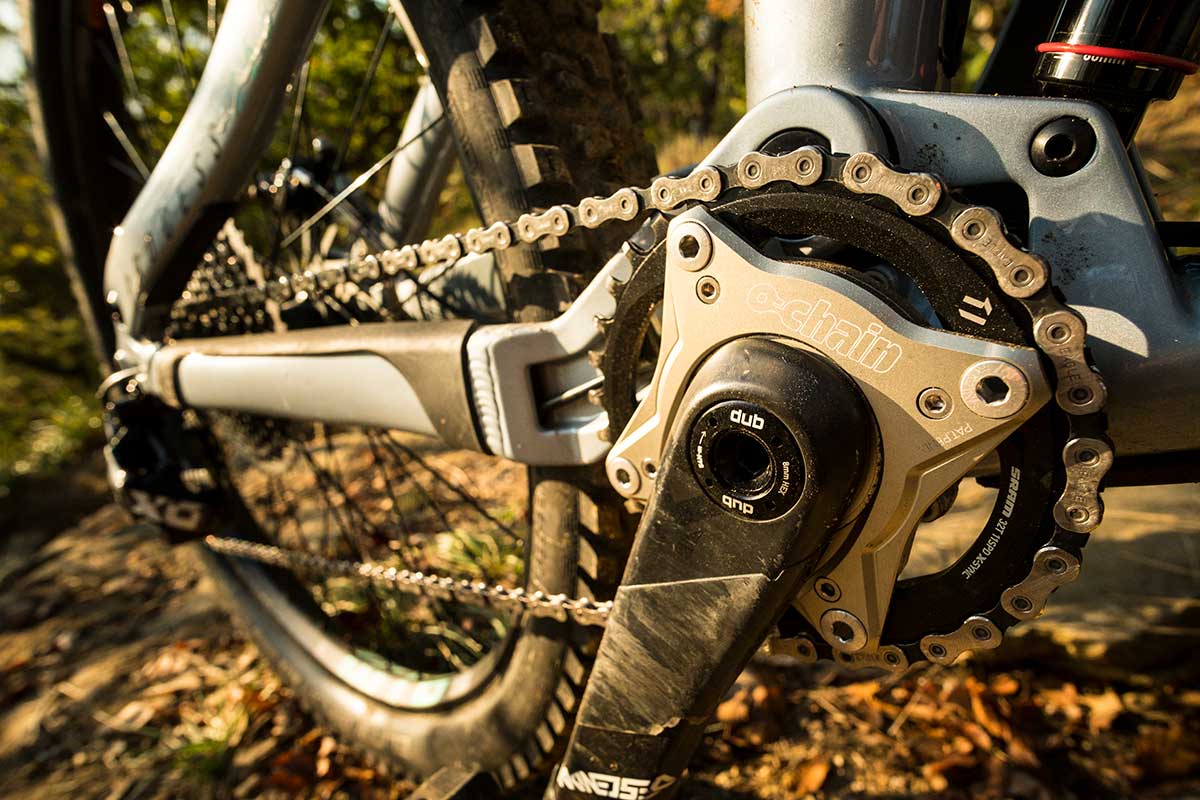 If you haven’t the foggiest (idea) what pedal kickback is, fear not. Tyler explains it in depth here. 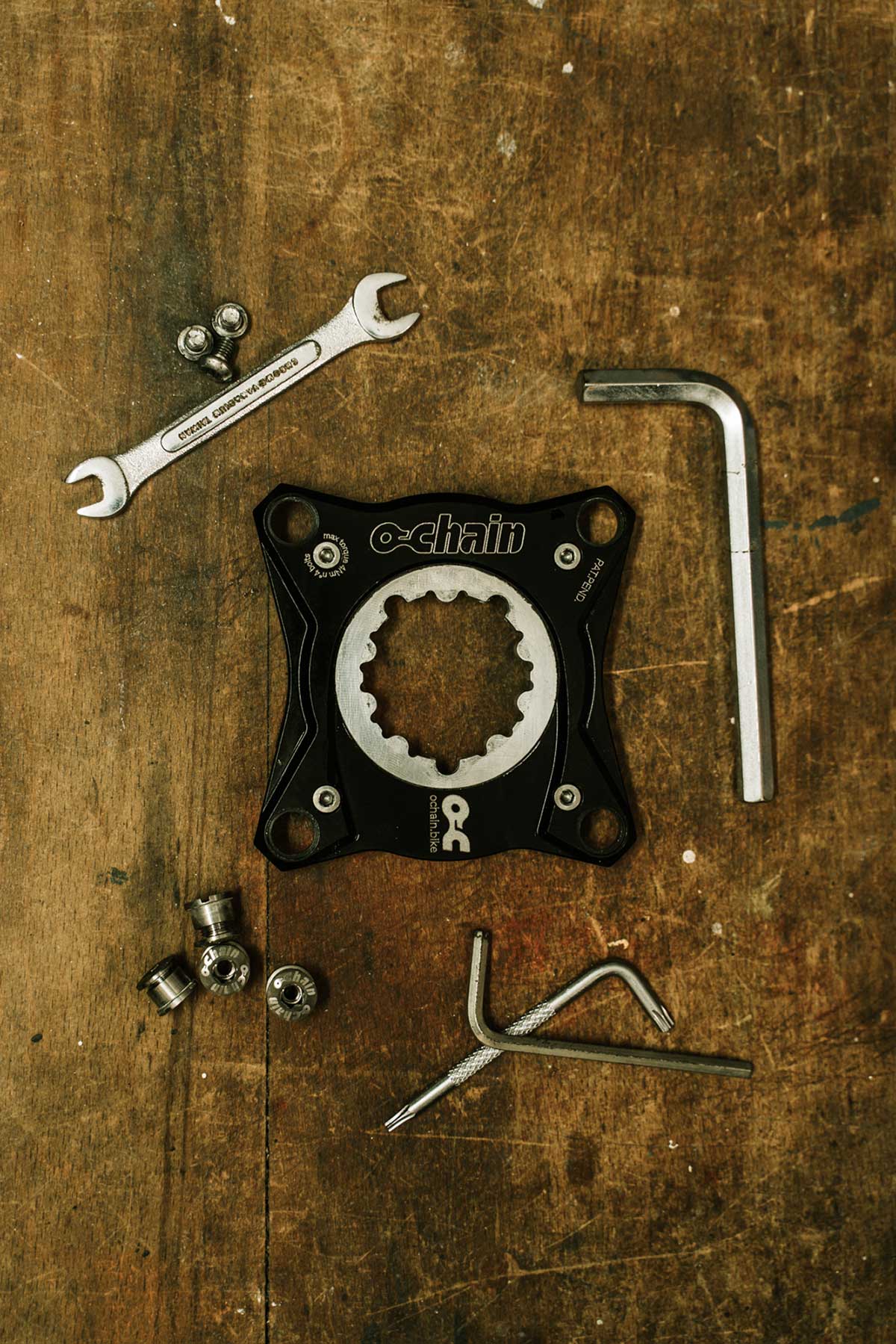 Ochain replaces the standard spider component of a crank set. It can be set up to remove 6°, 9° or 12° of pedal kickback, depending on the rider’s preference. Here are the specs:

#MTBGAMECHANGER is what the guys at Ochain call it, reckoning it will deliver the feeling of chainless riding, but with your chain on.

How does the Ochain Active Spider work?

This video shows it in action, we’ve pegged it at the spot where you can see the crank and spider moving independently, which is about all you need to see. 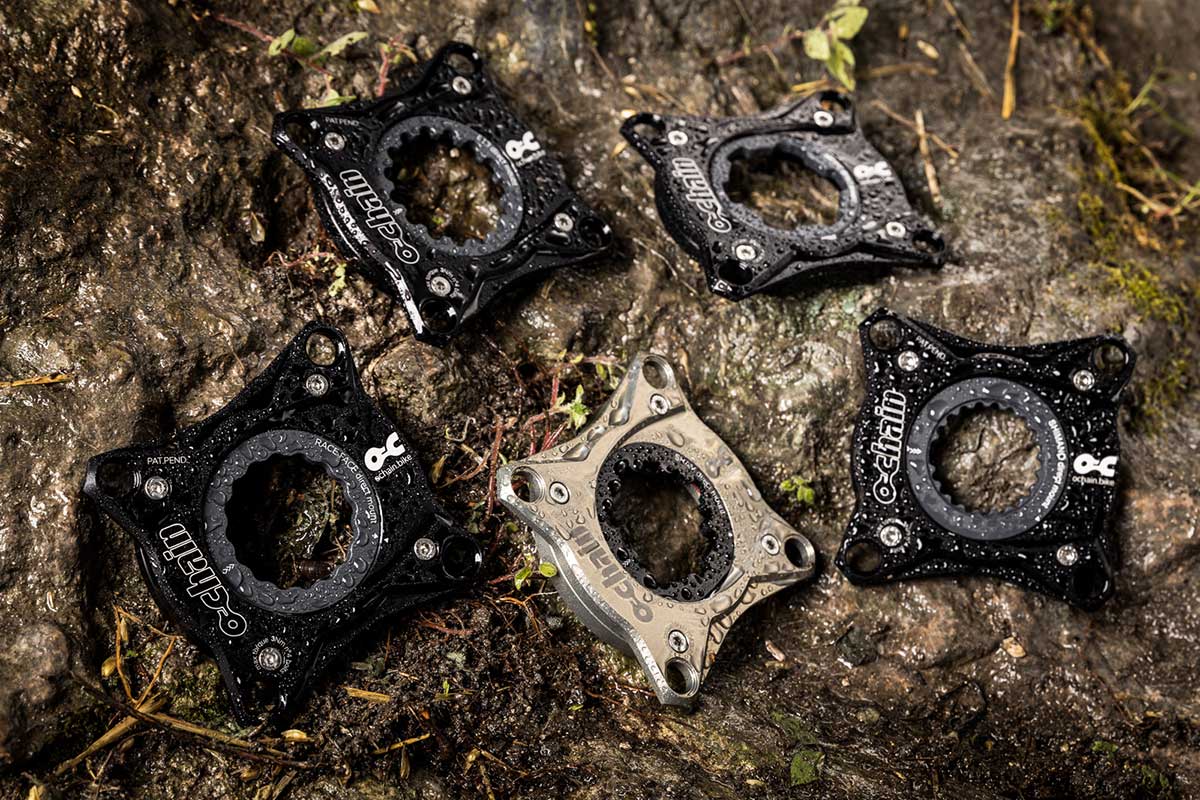 When a full suspension bike compresses the rear end, many designs will cause chain growth. Why? As the main pivot isn’t exactly concentric to the BB, compression of the rear end results in the distance between the chain ring and rear axle increasing.

Since the chain can’t stretch between the top of the cog and chainring, it tries to pull backwards on the chainring. This is its only option since the wheel can’t rotate backward as you’re coasting forward. 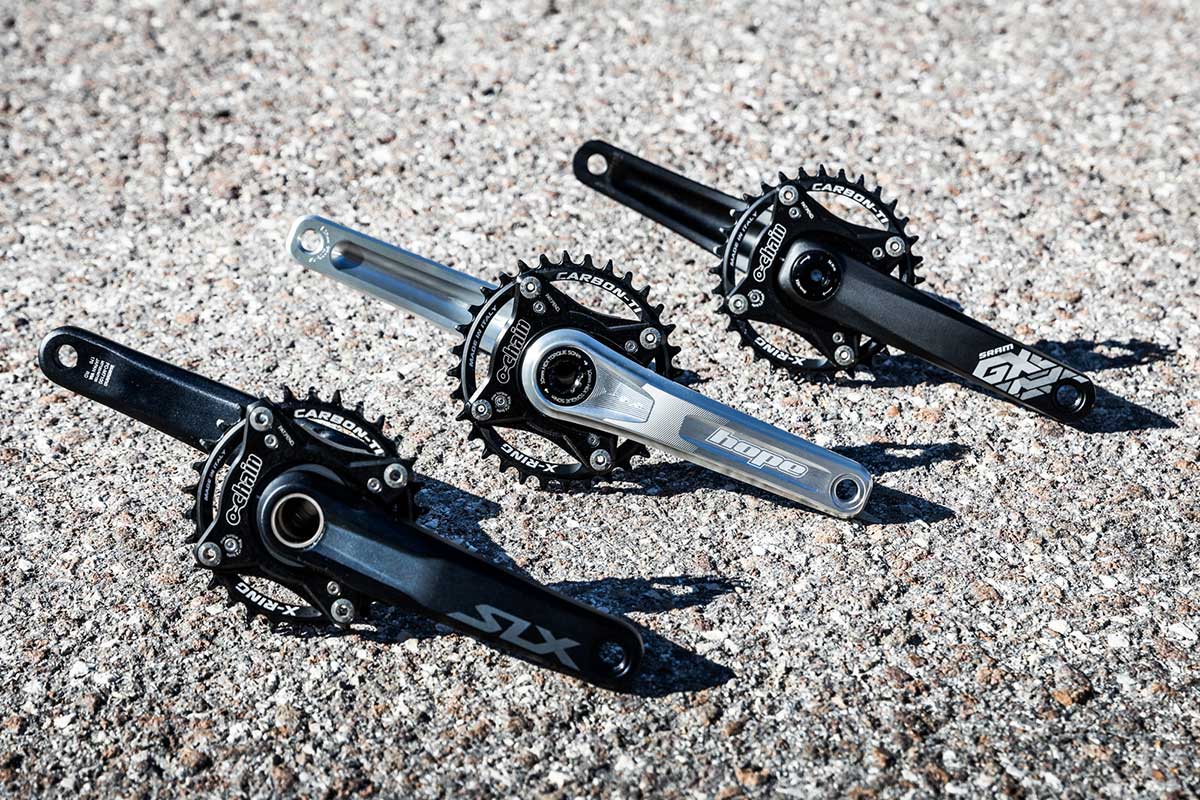 So, the chainring rotates backwards to feed more chain to the cassette. Without Ochain, the crankset would rotate with the chainring.

With Ochain, the chainring is able to rotate rearwards without affecting the crankset, and the rider can maintain a level, feedback-free pedal position. 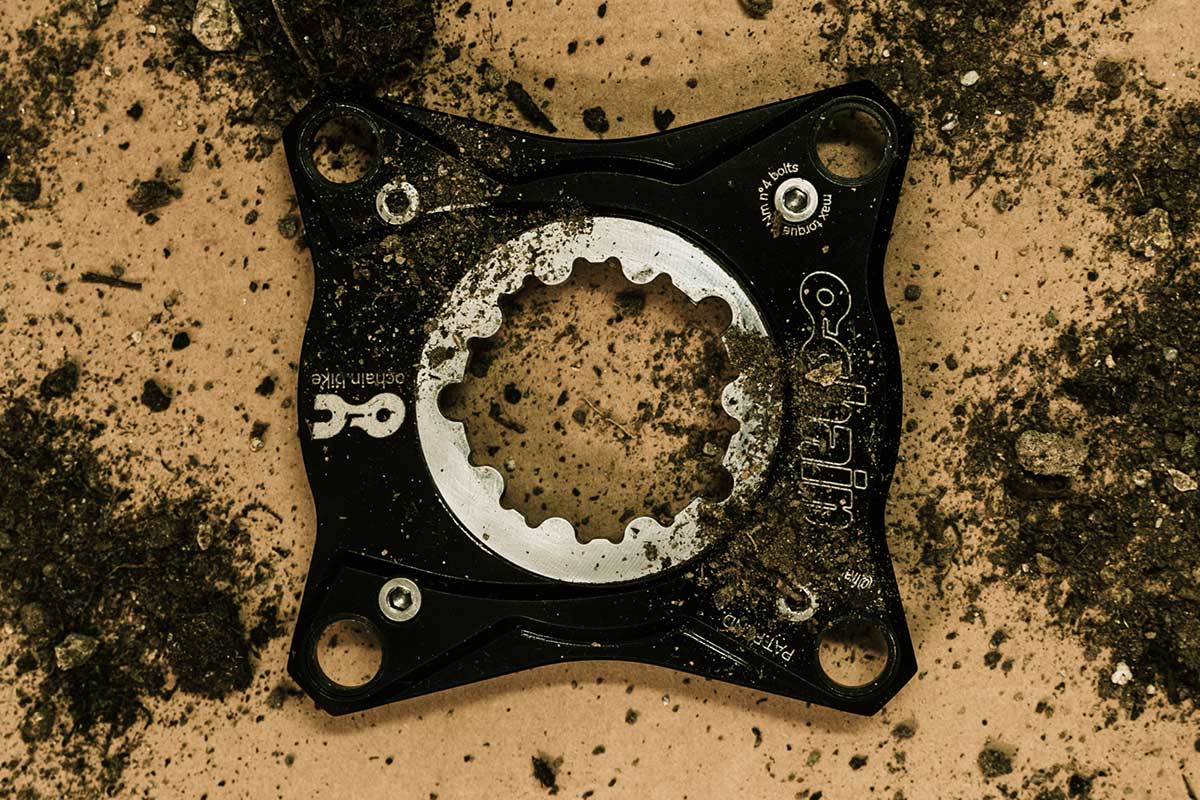 Inside Ochain are three springs that rotate it into a position that is 6°, 9° or 12° removed from the hub’s virtual engagement point – working on the basis that freehub engagement is instant, for the sake of argument. 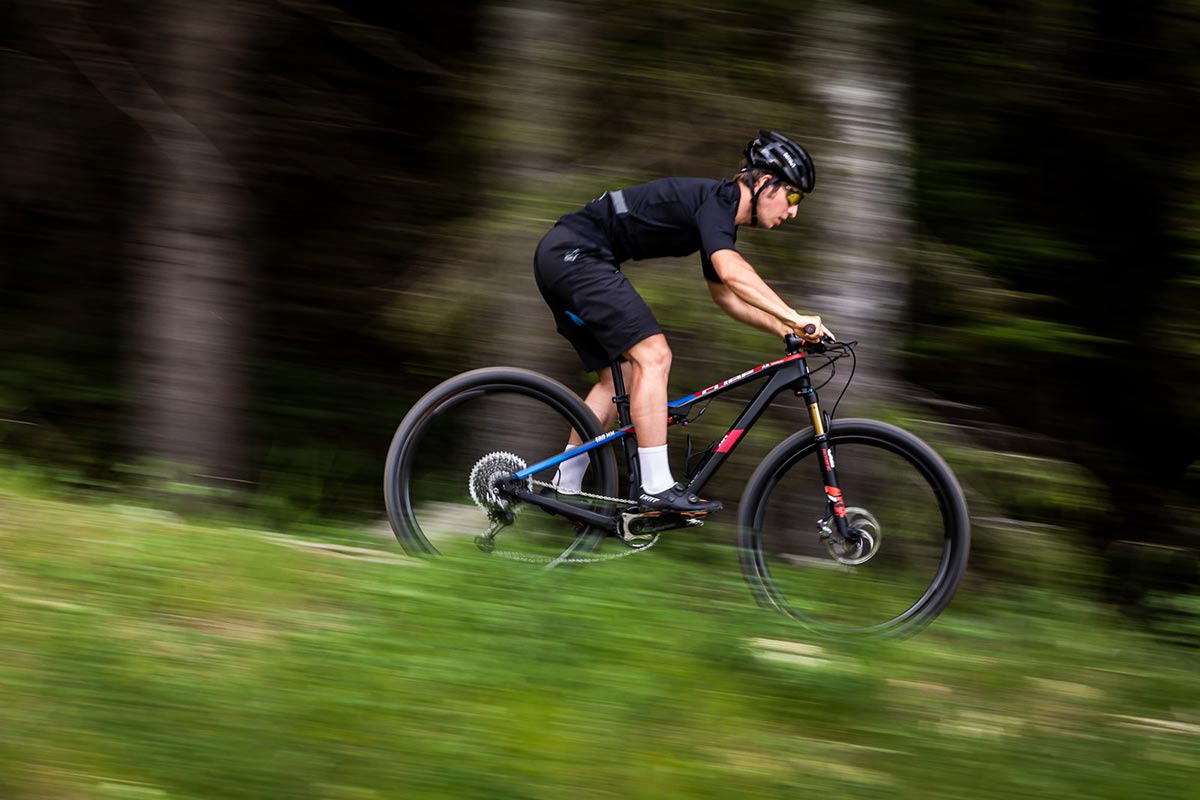 Thus, when you start pedaling, you will rotate the crank set 6°, 9° or 12° before it “picks up” the chain ring and applies torque to the chain. It is these springs that hold the Ochain in position that ensure you always have 6°, 9° or 12° of “free” rotation before you engage the drivetrain and are subject to its forces.

Ochain say the spring force is able to hold the Ochain in position but they don’t interfere with the pedaling process – you shouldn’t feel extra resistance when pedaling forward.

Inside, elastomers make it possible to have a smooth feeling when starting to engage Ochain (when you start to pedal). Without the elastomers you would have a “steel on steel” feeling.

Tailor the pedal feedback with Ochain

Ochain is shipped in the 6° configuration, but it comes with two alternative setup kits. Those setup kits are different length elastomers that sit within the Ochain mechanism. 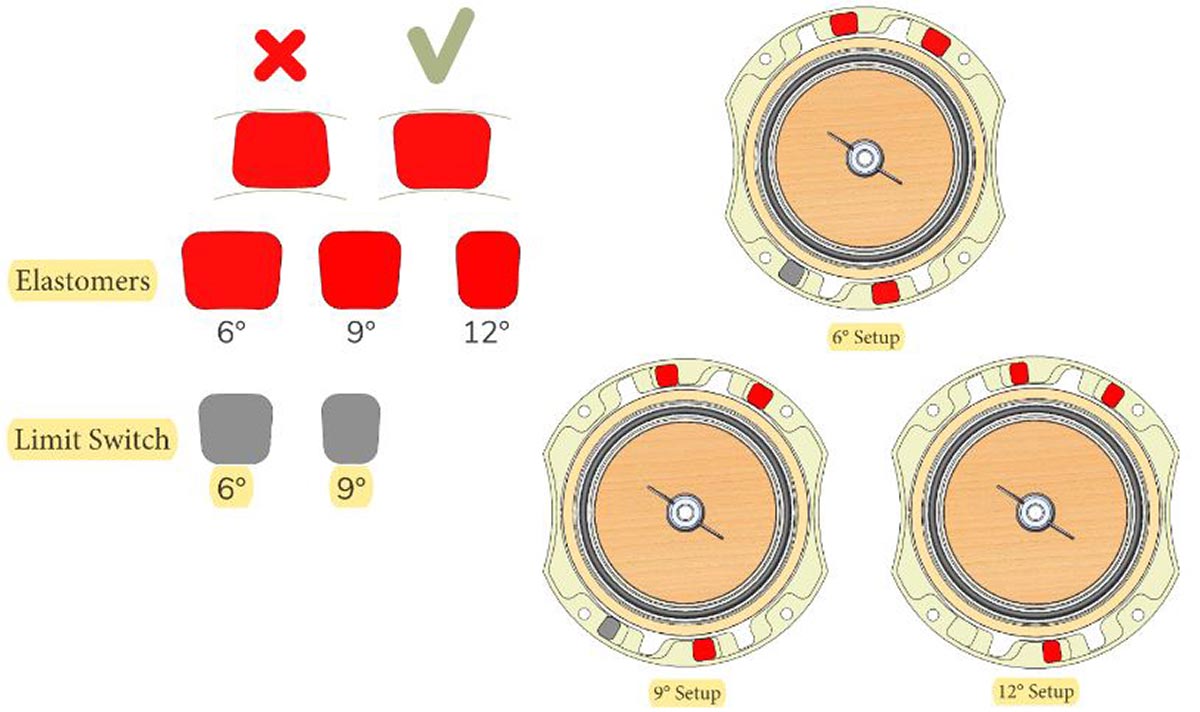 The length of the elastomers used dictates the degrees of “free rotation” of the chainring before it exerts force on the crank set through the chain.

This isn’t their first version

They actually launched v.1 in March, but that one is no longer in production. This new version is aesthetically identical. However, on the inside, they’ve added a “low friction” treatment to the moving parts, among other updates. The elastomer kit has also been updated to be more durable. 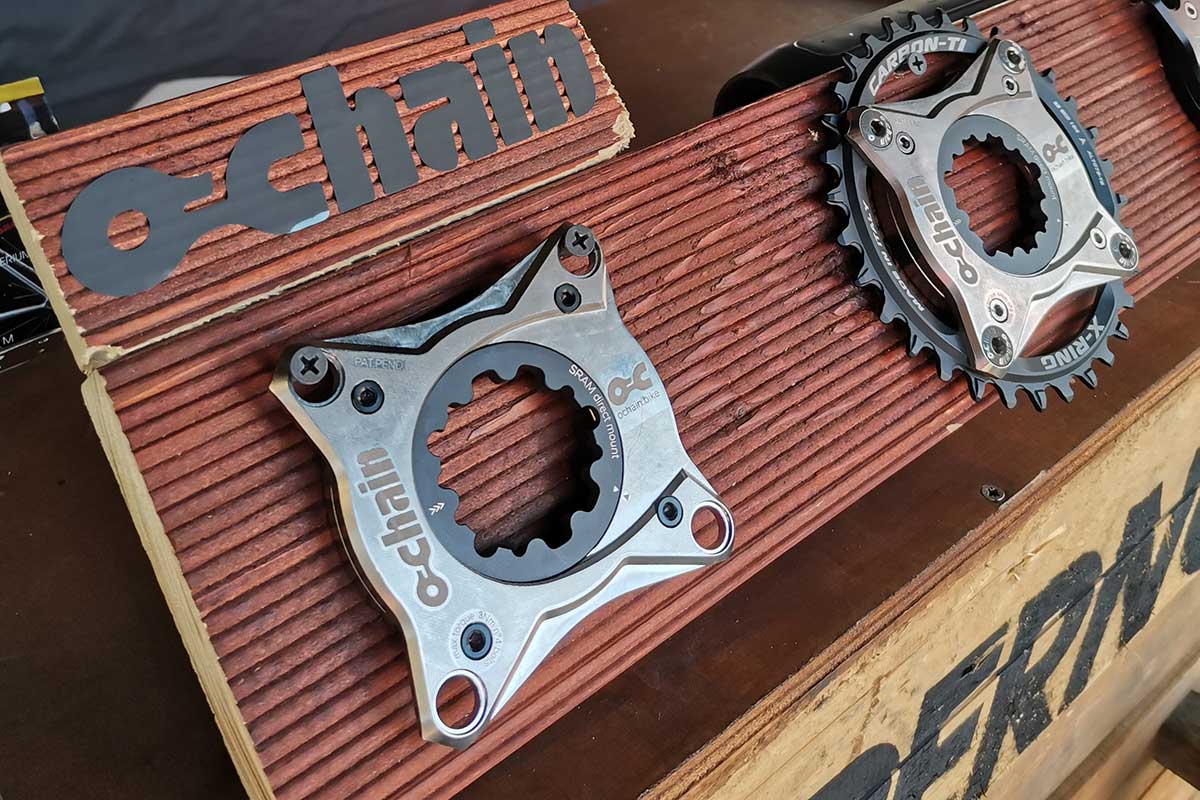 What are the downsides to Ochain?

As ever, there are potential compromises to be made. It’s hard to tell without actually trying the system, but it seems that there is the potential to lose some of the rapid engagement from your freehub. 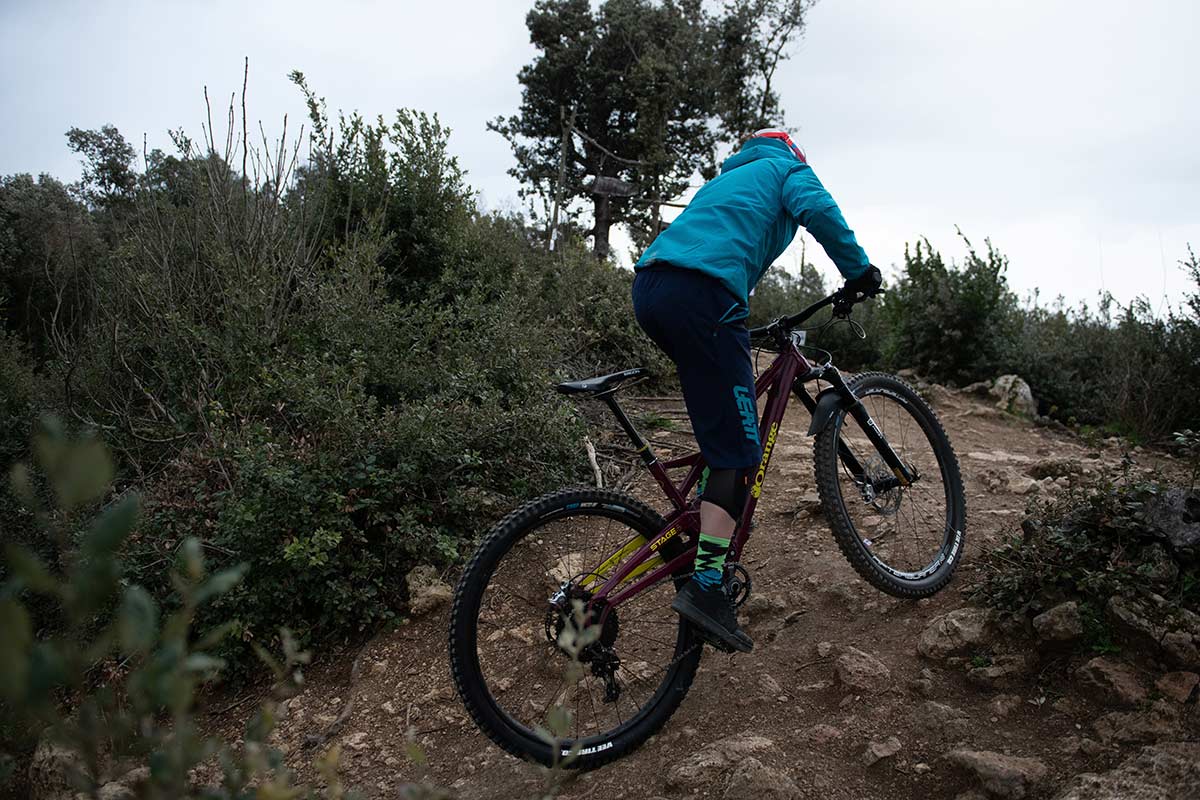 It seems that in certain situations, you have the potential of increasing the degrees of engagement of your rear hub. If this is the case, how much it actually would affect you in situations like technical climbing remains to be seen. 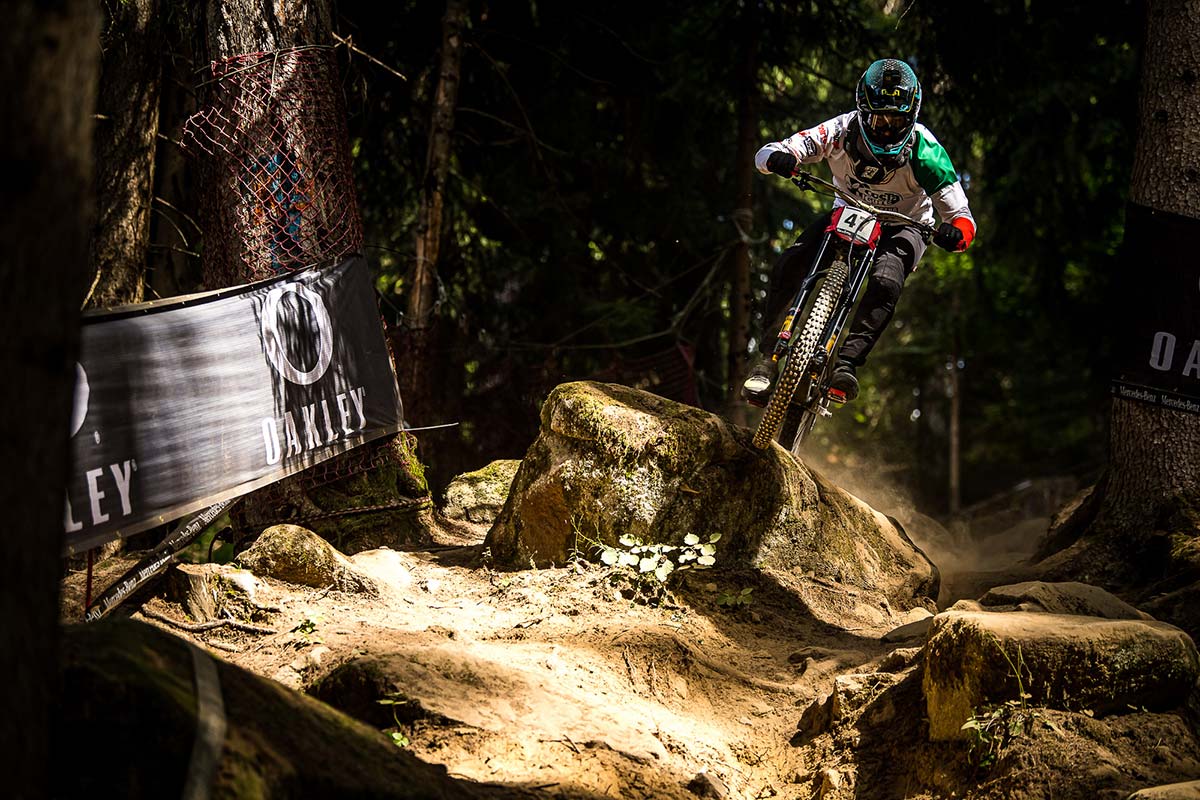 Likely, the Ochain will offer more or less benefit depending on what type of riding you’re doing. Reece Wilson of Trek Factory Racing runs the Ochain at the maximum 12°. As a downhill racer, he’s not doing a great deal of pedaling so the disadvantages of Ochain won’t even factor in for him. 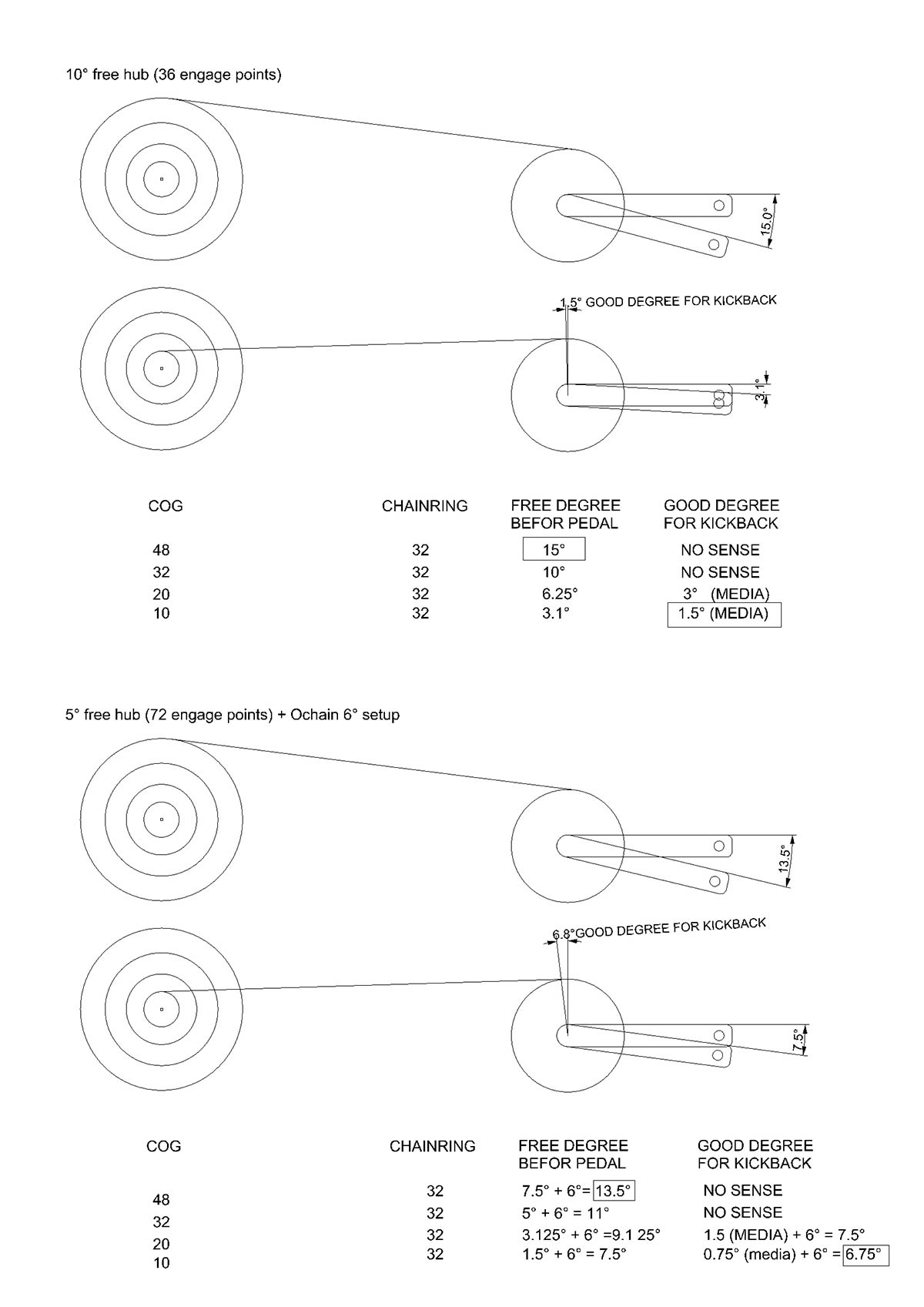 With each transmission setup, Ochain look at two riding situations; a steep climb and a descent. The graphic depicts what you’ll actually observe at the cranks.

I’m really keen to get the Ochain in for a test to find out how it can improve the ride feel of my Cannondale Jekyll enduro bike. The proof will lie in timed runs, no doubt. Chain, versus chain plus Ochain, versus chainless. I’m getting excited.

So the ride must pick up the angular free float when they resume pedaling? Seems contradictory to the efforts wheel makers have been putting into their freehub mechanism’s to overcome this dead spot, trading one problem for another. I guess this would be more a sore spot to the rider who rides techincal pedaling trail than to the more downhill focused rider.

If I wanted lots and lots of ‘play’ before I came to the bottom of a nasty little grinder, this product and a hub with 6+ degrees of pre-engagement (i.e. most hubs) would offer me 18+ degrees of free rotating nothingness? Not sure this will work in the real world of trail riding, but for the shuttle / hurtle (DH) crowd, this might be an answer to a question they might be asking.

This is a fantastic idea.

“It seems that in certain situations, you have the potential of increasing the degrees of engagement of your rear hub. If this is the case, how much it actually would affect you in situations like technical climbing remains to be seen.”

I think that statement is written backwards from its intent, no?

This makes no sense to me. What is keeping your cassette from spinning forward? You should be going down a hill, hence your wheels will be spinning forward and that will allow the chain pull the cassette forward and there wont be any kickback or resistance or chain lengthening. Such chain growth would only happen if you compressed your rear shock and you were not moving your bike foward at all. But that it’s really a real life scenario. This seems totally unnecessary and most likely annoying. Someone please explain to me what I don’t understand here. It makes no sense to me.

Thank you Abe, I was trying to figure out what I was missing on this, but I don’t think so, There is just no good logic to this. I your wheel is rotating forward, your cassette can freely rotate forward. Period. I’m not a rocket surgeon, but this is a pretty simple fact.

I would guess that the freehub free float depends on the position of the pawls with respect to the star rachet (or star rachet wrt star rachet) at the time of hitting an object with your rear wheel.
It wouldn’t be for me though, especially since you’ll probably lose quite a bit of pedaling efficiency when the elastomers expand in the dead spots of the pedal stroke.

I would prefer to link my chain together with about three springs for the whole lenght. that would give endless fun.

“it seems that there is the potential to lose some of the rapid engagement from your freehub.” I swapped out a poor engagement American Classic hub to a Hope Pro and replaced the star ratchet to a 36 tooth on a DT Swiss 350 hub to get faster engagement and don’t regret it one bit. I’ve not had any issues with this “problem” in the cross country riding I do.

I agree with carbonfodder, “Not sure this will work in the real world of trail riding, but for the shuttle / hurtle (DH) crowd, this might be an answer to a question they might be asking.”

I think anyone who has ever done bike park laps without a chain will immediately see the value of a product like this. Many suspension designs rely on chain forces to create anti-squat, and essentially a compromise is made to trade actual terrain-following performance for pedaling efficiency. With the rise of idler-equipped high pivot bikes, we might finally have more and better options, but this product has a lot of appeal as a band-aid for traditionally designed bikes. Paul Aston seems to like his, and he’s a lot more attuned to his machine than the average rider.

So it’s a freecoaster that’s built into the crankset.
I don’t even like freecoasters on my bmx bike, so i don’t see the appeal. Pedaling feedback has never bothered me.

As I understand it, kickback doesn’t really happen in normal downhill riding circumstances. The force of the kick only really communicates to your feet at really slow speeds with big compressions: broadly while climbing or on big, slow drops.

If you’re wondering whether this description of how the product works makes any sense: nope.

The video script is hilariously bad. “Bike, body and mind are thankful—and preserved. Everything else will depend on you.”

The reason this is confusing is that the manufacturer is confused. It’s not the reader.

About 2 decades ago GT came out with a full suspension bike line called the XCR. It seemed to offer a solution to squat and kickback. What was wrong with that design?