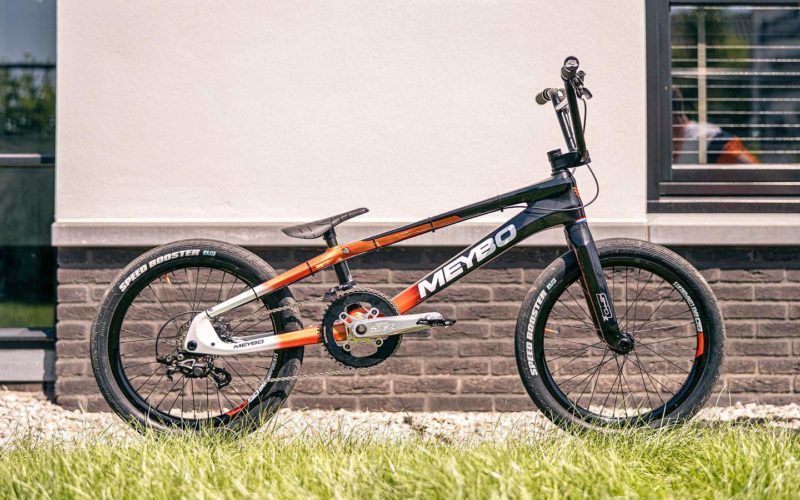 BMX World Champion is on his way to Tokyo 2020 right now with a prototype 2-speed BMX bike that is sure to shake up the Olympics, if not just the conversation. A carbon, geared hardtail with a Zee DH rear derailleur, a chain guide, and flat mount XTR disc brakes, yeah that’s not what usually comes to mind when I think BMX racing. But I’m certainly not one to judge the World Champion, and cyclist Twan van Gendt surely knows what he’s doing, having refined his Olympic start in his backyard in The Netherlands for the last nine months on a Tokyo-replica start ramp… 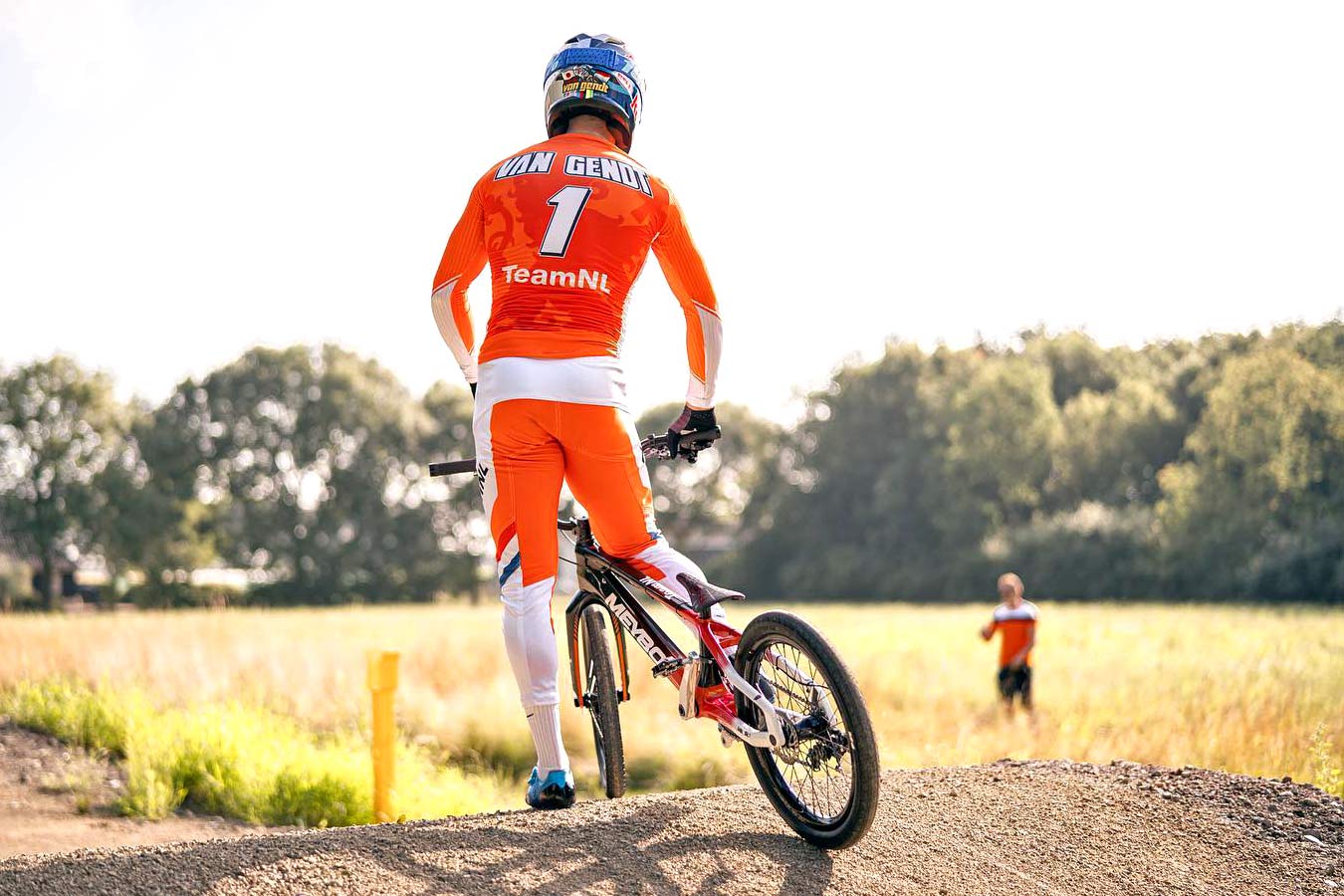 So let’s first get this out of the way… apparently yes, gears are UCI legal for BMX.  “Multiple speed gear systems are permitted” according to UCI Part VI BMX regulations Section 4, 6.1.079. Disc brakes are fine too, and so should be the chain guide as long as it’s not “superfluous”.

But why add a rear derailleur to a BMX bike in the first place? 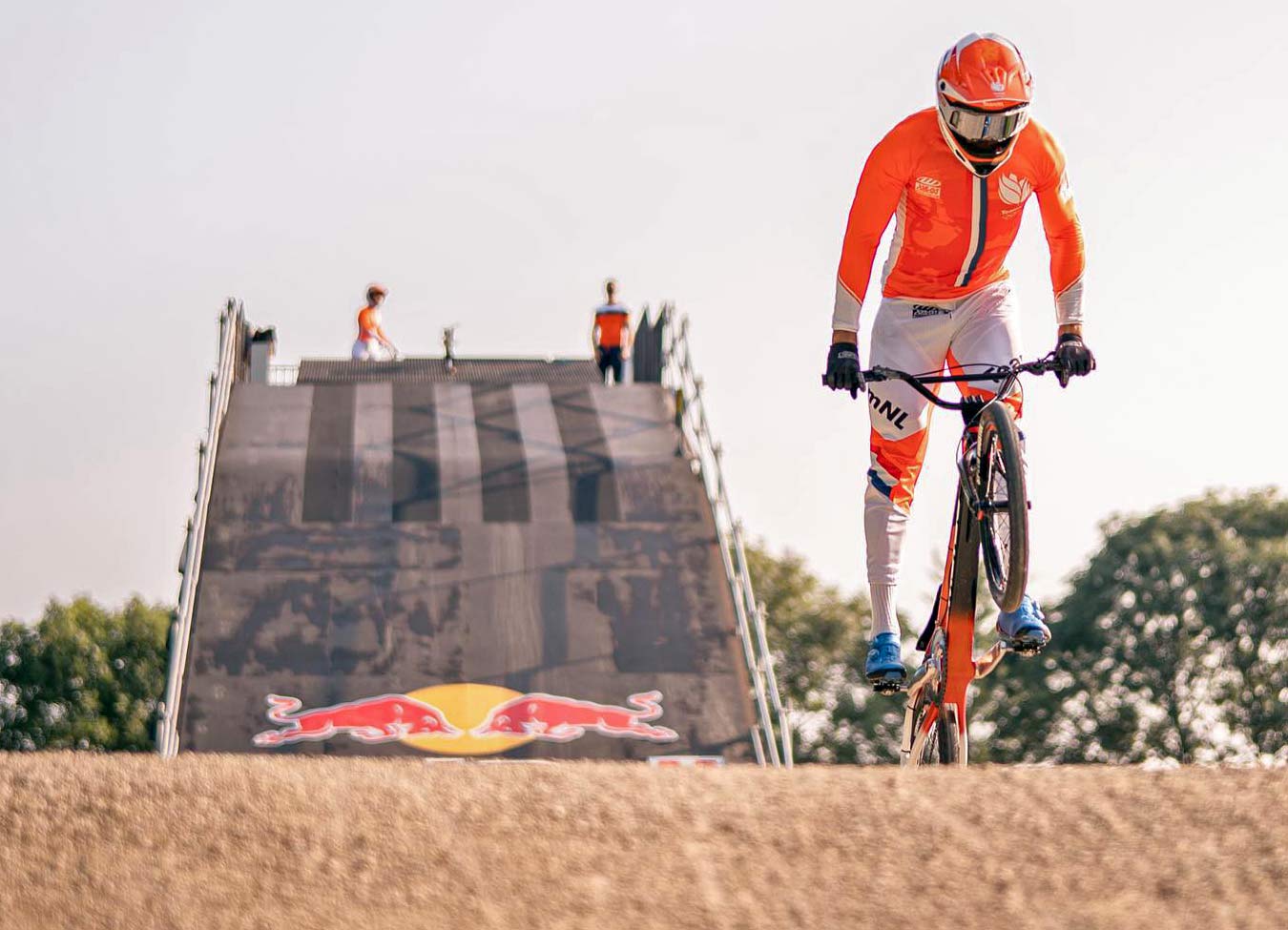 The trick seems likely to be the unique start and opening straight of the Tokyo 2020 BMX track. Unlike most UCI World Cup BMX tracks, this Olympic BMX track is described as having three, more flowing jumps in the opening stretch designed to be more egalitarian for both men & women athletes. And explaining that 80% of BMX races are decided before the first corner”, van Gendt says, “I have to make the difference at the start”.

It’s so important that Red Bull and the rest of Twan van Gendt’s support team built a replica of the start at his local BMX club, just 10 minutes from his home in The Netherlands so he could dial in the perfect start. 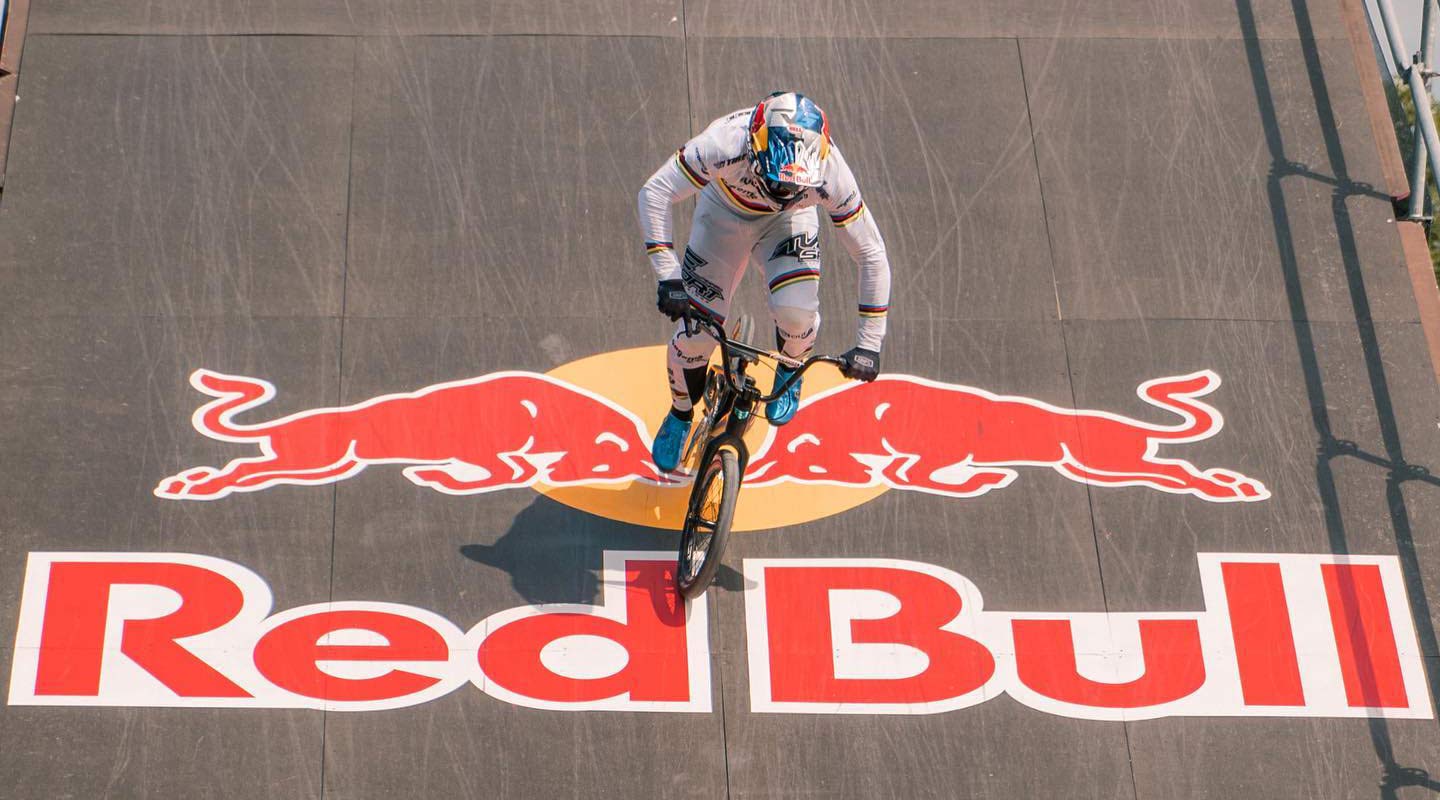 Head to RedBull for the full story, and the 18minute All or Nothing documentary on van Gendt’s Olympic prep, including subtitles.

Suffice it to say, this geared BMX bike wasn’t built on a whim. Twan van Gendt is convinced that the perfect gearing for the first straight is NOT the perfect gear for the rest of the track, so he’s built the first 2-speed BMX race bike we’ve seen in several decades to go faster! 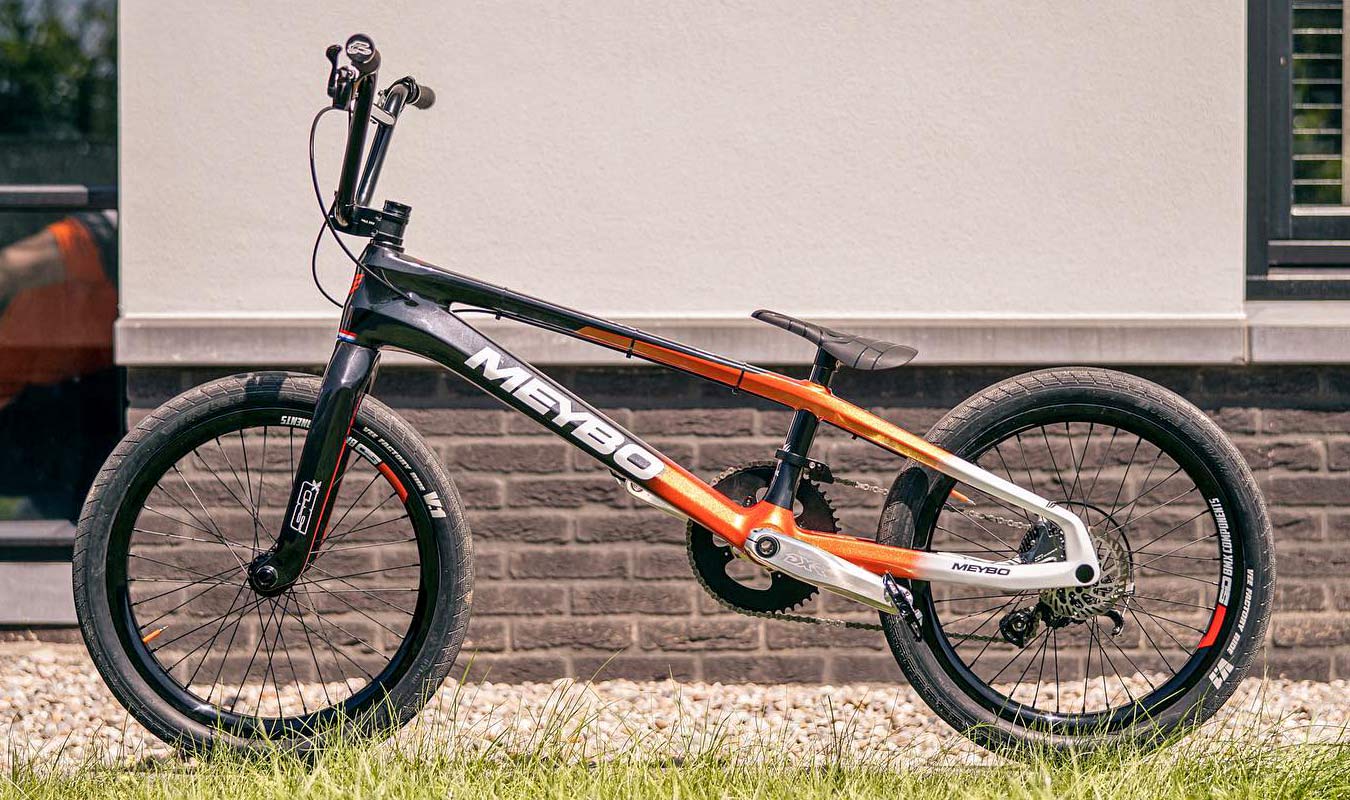 Van Gendt’s Olympic hopeful ride is an all-new Meybo HSX Carbon BMX frame that was created to be ultra-stiff (30% stiffer than its alloy predecessor) and super-fast. 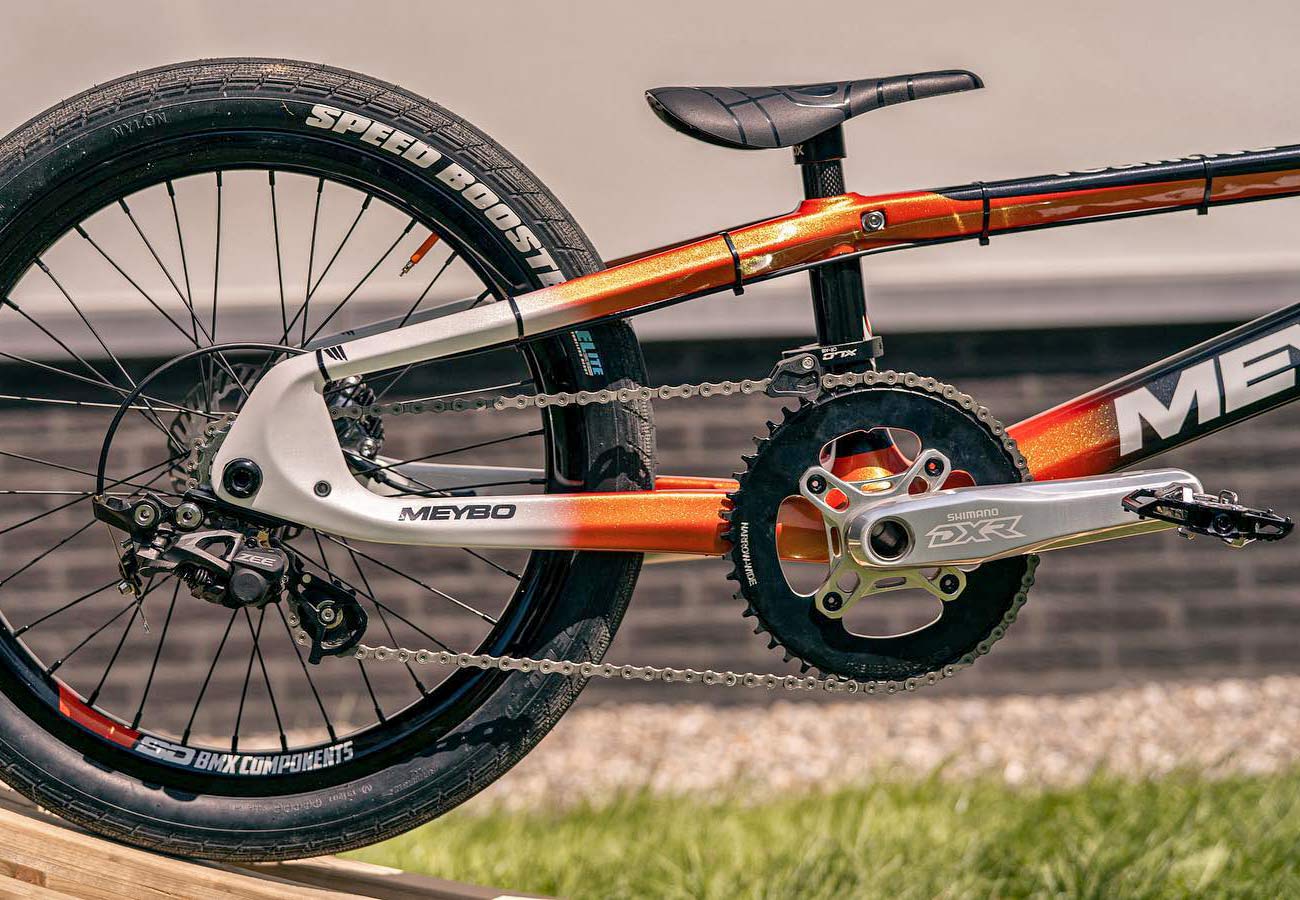 His drivetrain consists of two rear cogs moved by an ultra-short cage Shimano Zee M640 rear derailleur, and shifted by what appears to be a Zee 2-Way release shifter mounted upside down on the top, lefthand side of van Gendt’s bar. He’s likely only going to need to hit one shift in the race, so the ergonomics should be easy to manage. 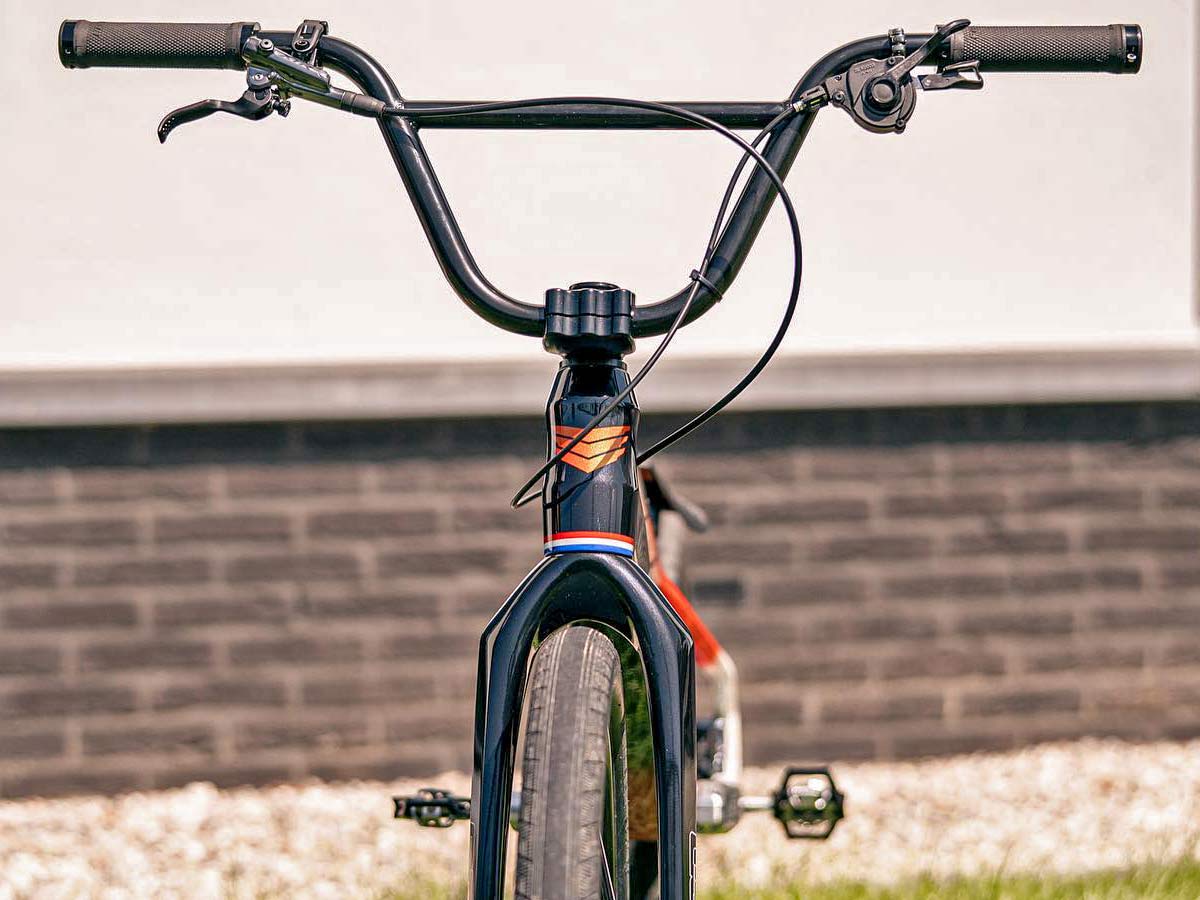 We’re not 100% sure on his individual gearing choice, but it looks like a combination of 14T & 16T cogs out back. Up front is a single narrow-wide 48T chainring on a Shimano DXR BMX crankset, with an XLC CR-A18 chainguide mounted backward off the tiny BMX seattube to keep the chain aligned behind that massive ring. 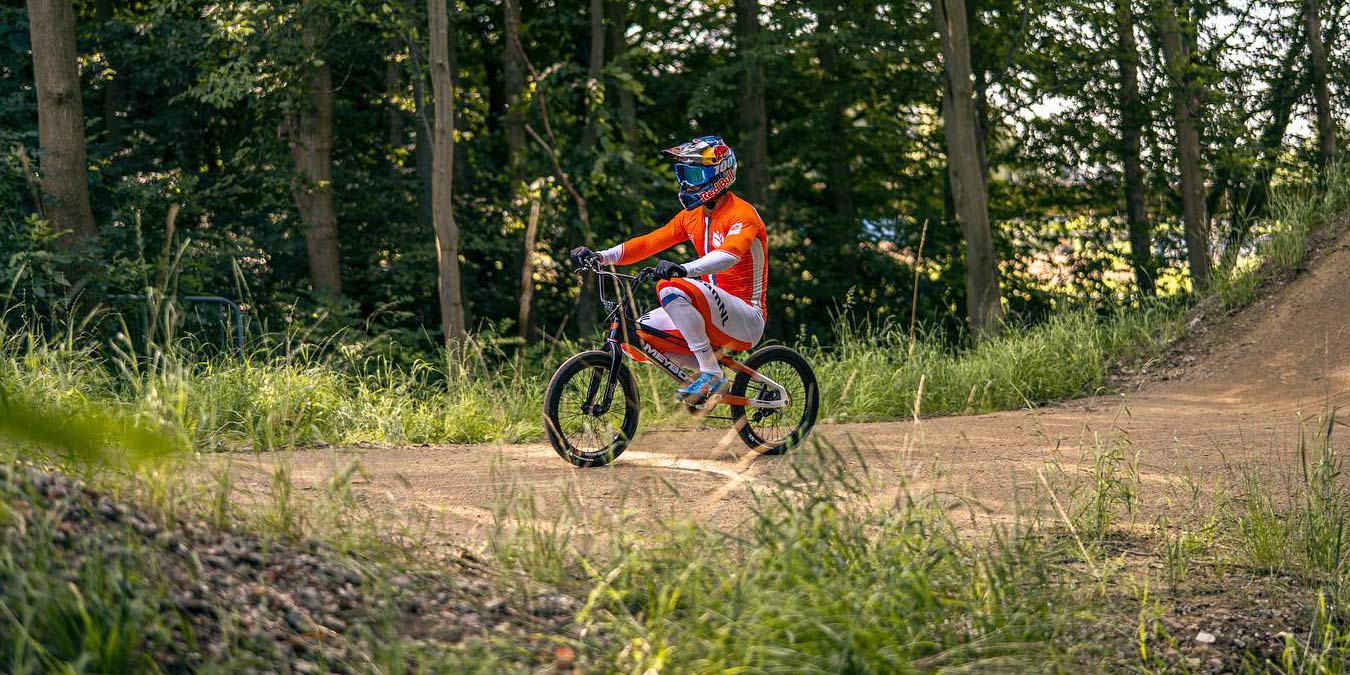 The new 2022 Meybo HSX Carbon frame itself features standards we’ll recognize from MTB, like a 1.5″ tapered internal headset, a wide BB368 EVO bottom bracket, flat mount rear disc brake mounting, what appears to be a 15mm rear thru-axle, and a replaceable derailleur hanger. Conventional singlespeed BMX drivetrains use an integrated Meybo chain tensioner, which obviously van Gendt has replaced with a derailleur. It includes internal routing for the rear brake line, but not for the unconventional derailleur cable.

The only question remaining, is whether the unique 2-speed BMX drivetrain will give Twan van Gendt the edge he needs to repeat his World Championship win on the Tokyo 2020 Olympic BMX track.

Olympic BMX Competition: How To Watch

Tune in to the Ariake Urban Sports Park racing action which kicks off with Quarterfinals on July 29th, then Semifinal & Finals on the 30th.

Check out our full Olympic BMX feature to learn more about the racing (and new BMX Freestyle) and to stay up-to-date on how & when to watch Olympic BMX.

Interesting how the shifter is mounted. I guess he only needs to shift if once during the race. It is also funny to see a seat on a bike that will never get used.

I see a picture of the seat being used.

Its one of those better to have and not need situations..unless of course you’re into that sort of thing…;)

I know various attempts have been made at 2spd systems in the past, but perhaps not at the Olympic level. The bmx fb group I saw this on first was was crying out that it should be banned and that it would be the end of bmx if it were normalized. lol

2-speed race bmx isn’t new. We’re they doing this 5 years ago, too?

When competitors from some countries have replica tracks made for them…You can hardly call the Olympics fair.

Every country has a replica track, some have just the first straight and some have the whole thing. A bmx track isn’t that expensive to build, especially if it only needs to last a year or so.

Who said the Olympics have ever been fair?

Why didn’t he use the Classified system. Quicker shifting, no external bits to break, still a single chain for simplicity and chainline, and can shift under huge load.

it has massive mechanical inefficiency

Read into the efficiency on their website. you’ll be surprised at how efficient it is 😉

Most likely because the Classified system is designed with road and gravel bikes in mind, so the hub spacing, axle diameter, and freehub is not compatible with BMX bikes like the Meybo which appears to use a 120mm spaced hub with a 15mm thru axle. The bike above technically has a cassette body capable of running multiple gears, but they’re usually much shorter – just wide enough to run a few individual SS cogs with some spacers.

Looks like this is two very closely spaced gears (14 & 16T cogs?) while the Classified system has a substantial jump between ratios.

Surprised nobody else had mentioned this already. His was a three speed, correct?

Yep, the Triple Threat! Was an interesting time for Mongoose, they had the Aftershock too with suspension.

Using a front shifter would still requires a chain tensioner, which the derailleur already takes care of. So it’s extra complexity and weight.

why does he need gears? are his legs not strong enough?

What, no 9-63t cassette? How will he get back up those hills?

Multi-speed BMX bikes have been around for ages, have been used by pros, and there are quite a few examples during the last 2 decades…heck, my daughter ran a 2-speed for specific races.

In other news, competitors in skateboarding are using four-wheeled skateboards for the first time in Olympic history.

So he’ll use the harder gear for the start and shift down after the first straight? Of will he use the easier gear to pick up speed in the first few strokes and shift up?

A more refined approach is to build the two gears into the rear hub.

But far less efficient. Routing all that torque through tiny planetary gears wastes a lot of energy.

I’d just eat a lot of beans the day before and have jet propulsion. Crop dust my way to Olympic stardom.