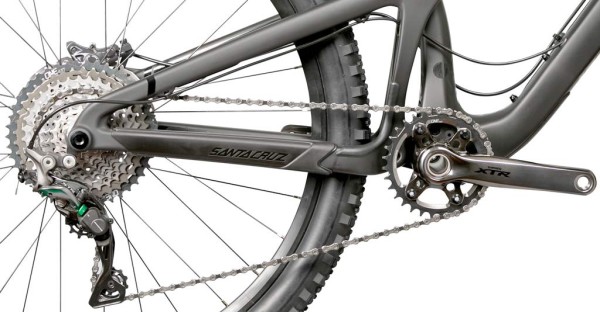 If you thought their 44T cog for SRAM’s cassettes was big, OneUp Components has pushed oversized cassette cog adapters to the next level with a 45-tooth cog for the new Shimano XTR M9000 and XT M8000 groups.

Designed specifically for extending the range of their 11-40 cassettes on a 1×11 system, the cog slides in behind the standard cassette, keeping the stock 40-tooth alloy cog to smooth the transition. Room is made by pulling the 17 and 19 tooth sprockets and using OneUp’s 18-tooth cog in their place. The result is a claimed 12.5% increase in total range while only adding 65g over a stock XTR cassette. 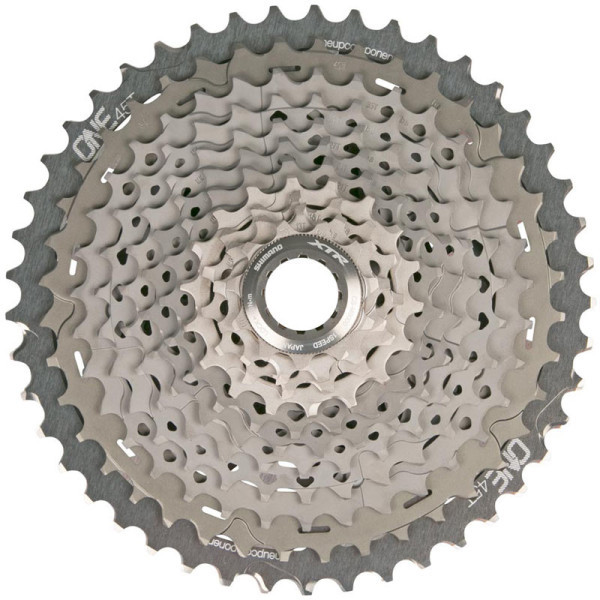 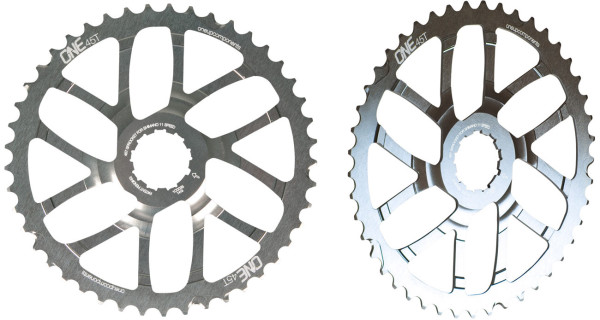 The parts can only be used on the new Shimano 11-speed mountain bike groups, and only with a 1×11. OneUp says the Shimano derailleurs don’t have the capacity to add this size cog with a double chainring up front. But, they won’t require much B-screw adjustment either, saying it’s well within the normal operating range of the derailleur to accommodate this cog.

The revised layout lets them divide the cassette into two ranges, a Descending Zone and Climbing Zone. In theory, this keeps the cadence between shifts along the lines of Shimano’s Rhythm and Step concept in the gears where you’re typically seated, pedaling away on the rollers and climbs. Changes are between 13% and 15% per gear between the 21 and 45 tooth cogs.

In the descending zone of 11 to 18 tooth cogs, the gap grows to 15%-20%, reducing the need to double shift when trying to make up ground on the downhills. 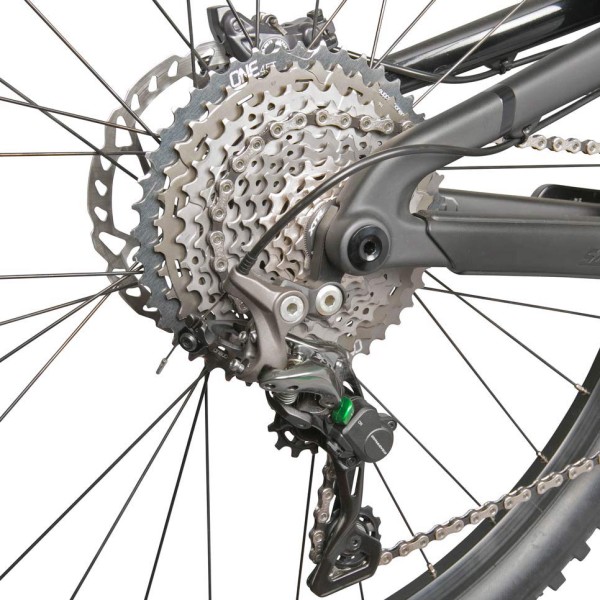 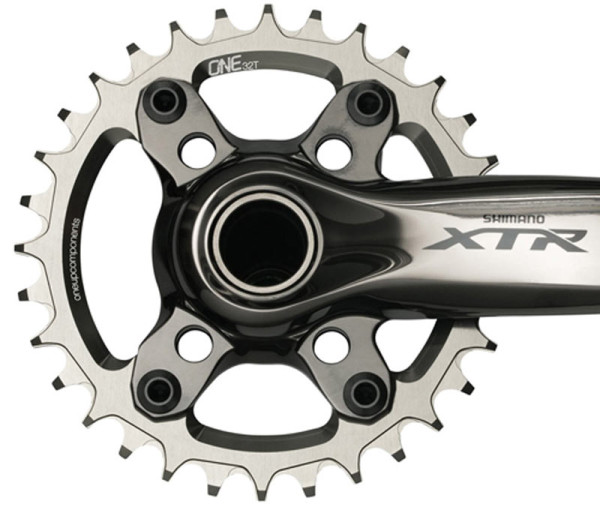 Of course, they’d love you to pair this new cassette kit with one of their XTR M9000 narrow-wide chainrings. Conveniently, these save 65g over a stock Shimano 1x chainring by removing the bolt cover plates, putting the threads directly into the ring and other design changes. And, with a $95 price savings over a replacement Shimano XTR chainring, it’s wash if you’re needing to replace the chainring anyway. 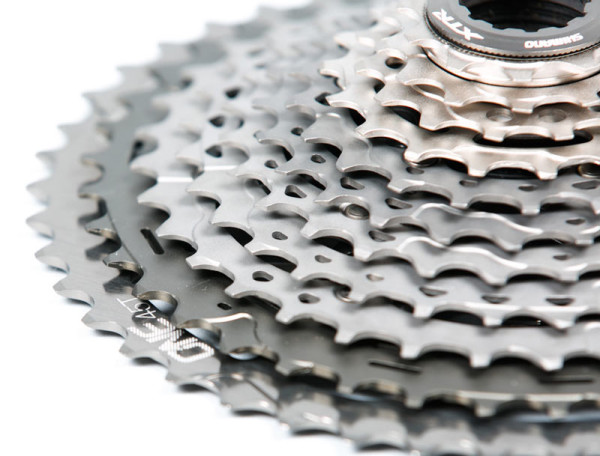 In other news, they were recently awarded a U.S. patent for their cassette adapter, with one the key design elements being the protrusions that allow the larger cog to be properly spaced from the next smaller cog. Here’s what OneUp’s Jon Hadfield had to say about it:

We’re stoked to have been awarded a patent for our expander sprocket design. However, we don’t feel that it is particularly news worthy. Shimano, SRAM, Race Face, Hope, E-13 and Wolftooth all have patents or patent applications for various designs. Not taking the necessary steps to protect our own ideas puts us in the unfavourable position of having our unique designs duplicated while our much larger competitors block us from their novel concepts.

So what’s to come of competing designs from others? Word on the street is they’re talking to other brands about licensing the design if there are infringements. 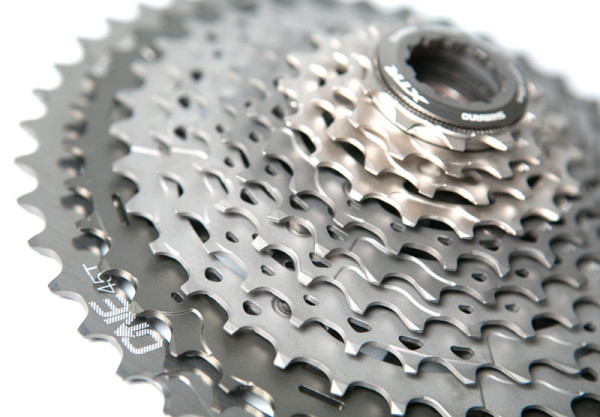 I feel like they’re really starting to live up to their name: http://goo.gl/vtx7Tk

That’s not a good thing.

They were seriously granted a patent for that? I feel like this is one of those ‘Apple round corners’ things.

The LAST paragraph is the best…. talking to the competition to pay for licensing rights for something they created prior to there being a patent. Nice! This crap has gotten out of hand.

Okay, this trend has gone full left outfield, past that and into the bleachers.

I don’t know about anyone else, but I’m going to avoid buying anything from One Up from now on. Taking something that already exists and slightly tweaking the size is not innovation. I’m all for patents protecting truly new ideas, but the bike industry is full of bad patents and we don’t need even more.

if you make a 44 or 46 teeth, or maybe a 45.5 (half broken teeth) on a standard freehub you’re not infringing the patent then, it seems. funny stuff.

If you need this thing, you should hit the gym more and stick to your 3X. It’ll also save you a lot of $$ in the meantime.

FoolCyclist & mike: I think you misunderstand what’s going on here. It’s a given OneUp’s competitors will file patents and OneUp needs IP pickets of their own to protect their business. The patent they were granted is basically “trading stock” in case they need to cross-license with a competitor in order to stay in the game. Of course this game sucks for new entrants, but that’s how it’s played today.

Meh. I’m waiting for them to come out with a 60 tooth cog and 12 tooth front chainring.

This is getting out of hand.. I think at this point you need to go back to double or triple chainring and two shifters. I’m all for a 1 x but most relevant in CX, DH and XC racing you plan you gearing ahead of time. There a point with my cyclo bike when I’m riding over 4 to 5 hours ride on steep up and downs on gravel roads I start wishing I had a 46×38 instead of just a 42 up front with 11-36 in back. Same for my XC bike a 36 x 11-36 (10 sp) would great for racing, but day to day and longer rides I still prefer 38 x 26. For triple vs double on mt bike I prefer double. with triple I always felt 22 was too little, 32 wasn’t enough and 44 I hardly ever used. I sorta feel the double system was completely overshadowed by the wide narrow craze.

What Sana Cruz frame are they showing? Word on the street is SC stopped making (technically: “wont be available until 2016”) XL and XXL Tallboy LTs. I’m still waiting for SC to release an update this year.

oh for Christ’s sake, put the triple back on already….

my 3 x 9 XTR still works perfect, i have more gears(top and bottom) twist shifter and tons of spare parts from the classifieds from all the fools that sold them off. thanks progress for fixing a problem that did not exist.

I had to double take on this. 45? WTF? Seriously, as someone said, if you need this you really should either ride more or go to the gym. No rider who actually rides their bike (as opposed to sitting around talking about it) needs a 45 up back.

Antipodean- You guys are missing the point. This will sell well for them.
I think the swap to 11 speed is a tough sell with 10speed and the 42/40T cogs doing very well for many who ride rollers and flats.
But when you grind big climbs and run 27.5/29 or Fat and Fat+ those big gears are needed unless you are on the top 10% of the fitness meter. Which is all good for you when you are. Many are not. This will kill 2X swaps and Shimano is not going to like it. This will kill front derailleurs along with short chainstays and fat+ tire sizes. Stick a fork in them.

Patents? For what? I will never by from one up now.

OneUp deson’t work very well at 10 speed. Why should it work better with 11 speed? It’s a pain in my ass to see how a company destroyes the 100% shifting performance of shimano cassettes with their own parts. beside that: the gear ratio is way too rough at the small cogs: I can go with a XX1 kassette to have the same with less weight.

Does anyone even read the news anymore? The patent isn’t for the cog itself. Jeez.

So basically, they’re wanting to get into the patent troll game. Nice guys…

How would I fit one of these on a non di2 road bike?

You don’t. The pull ratio is different between road and mountain. No drop bar brifters exist that will shift these. I suppose you could friction-shift using whatever Retroshift levers are called now, but that would be crazy.

I have a OU 40T cog and honestly it’s a crap. The crisp precise shifting of the XT is gone (especially high gears) so they can patent it but I won’t be buying any of their products. For the price of two quickly wearing extender cogs you can buy a new XT 11 speed set (with 11-42 and RD which was designed for that range) and I am guessing it will trickle down to SLX next year for even lower price.

I use a OneUp RADr cage, OneUp 16t cog, and e.13 42t EX cog on an otherwise full XT drivetrain. Shifting is phenomenal. I’d even call the shifting telepathic. The e.13 cogs are tuned for 11-34 or 11-36 cassettes, SRAM or Shimano individually. OneUp’s big cogs for 10sp systems are one-size-fits-all.

@Eric Hansen you can though. Ive seen pro’s running XX RD with sram road shifters so they can run 36 cassettes.

Im just wondering about a 45 and what set up would allow that. I know the di2 XTR now works with Di2 road.

Modifications to hundred year old technology does not impress me at all.