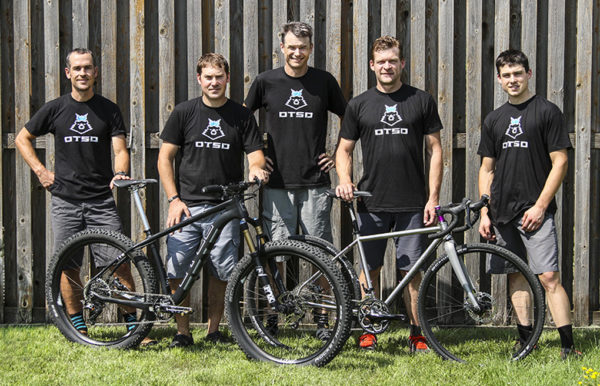 The team from Wolf Tooth Cycles has been quietly working on a new product range for years. But this time it’s not a new chainring, chainguide, or cassette adapter. Their newest project involves not only completely new-to-them offerings, but also a completely new brand. Otso Cycles is the culmination of that work, and by the looks of things it’s time well spent.

Named after the spirit of the bear in Finnish mythology, Otso seems to fit well along side Wolf Tooth Components for companies named after revered and respected creatures. Their first two bikes share similar naming inspiration with the Warakin gravel bike named for a mythical wolf/hyena creature and the Voytek fat bike taking its namesake from a war fighting, soldier wrestling, beer drinking, cigarette smoking bear (true story). Aside from the clever names though, Otso Cycles are noteworthy for more than just being new bikes from a well known component manufacturer.

Otso wasn’t created just to release another me-too bike into an already crowded marketplace. The bikes both have specific traits that make them stand out (game changing, even), and should make them quite desirable… 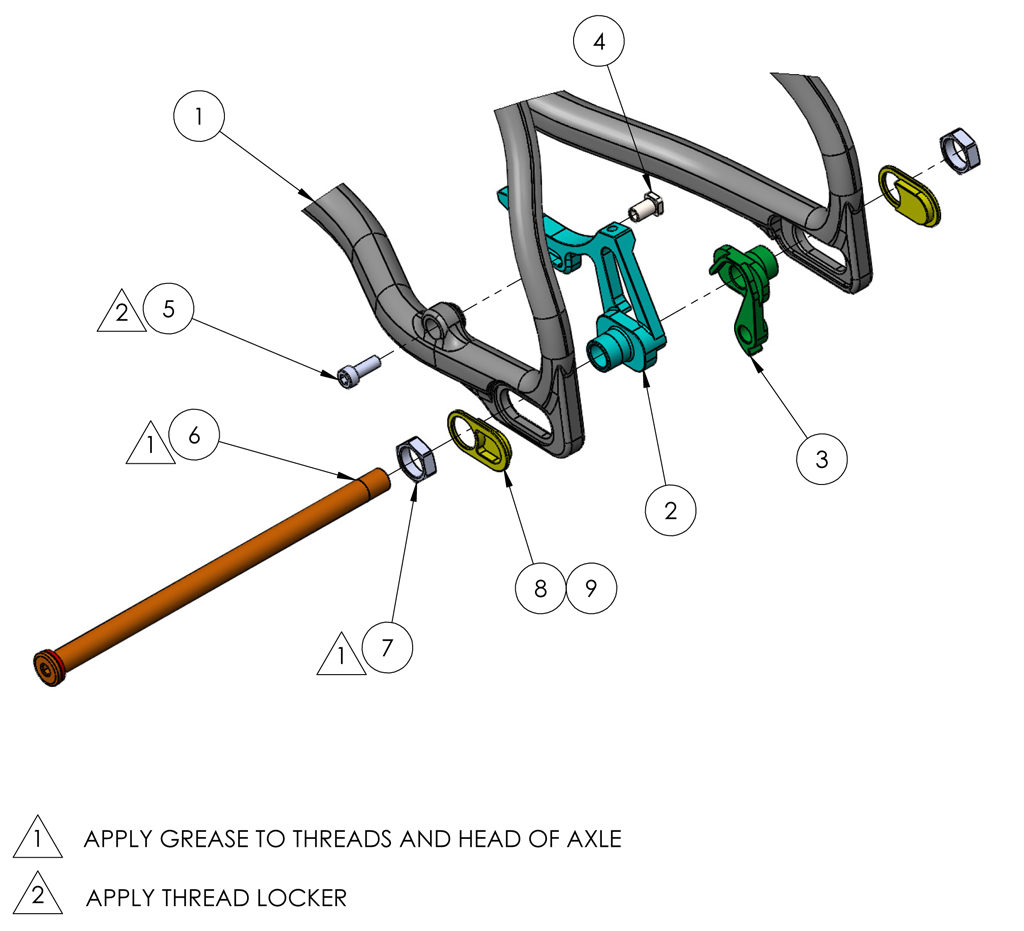 Knowing what we do about the Voytek, it’s hard to know where to begin without just blurting out a bunch of excitement over the bike. Though, we should probably start at the dropouts. Both bikes feature Otso’s Tuning Chip dropouts which are an elegant solution to the bikes’ versatility. Even though the system effectively offer the benefits of a sliding dropout, the dropout chips themselves are stationary which completely eliminates slipping and should cut down on any creaks. Otso also promises a unique solution to run single speeds in the dropouts as well, likely to be released by Interbike.

Built around a 142 x 12mm thru axle for the Warakin and 177 x 12mm thru axle for the Voytek (more on this later, it’s probably not what you think), the dropouts have 2 different tuning chips. One chip is used for the fore and aft positions by flipping it around to gain the adjustment, with a second chip available for the middle position. This corresponds to the 20mm total adjustment for the chainstay length with 10mm increments. It also serves to steepen or slacken the head tube angle by +/-0.2º due to the angle of the dropout slot. 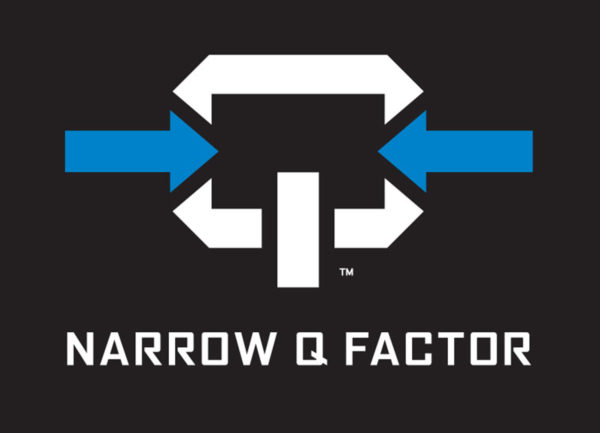 Clearing 4.6″ tires with a 177 x 12 rear hub and short chainstays is only part of the story, though. The crew at Wolf Tooth Components loves riding and racing fat bikes, but one thing has always bugged them – the Q Factor. After spending all winter pedaling around a fat bike, switching to your normal mountain bike in the spring can be be an eye opener as your legs are forced to adapt to a completely different Q factor. Most of us put up with it, but lately fat bike manufacturers have been finding way to rein in the width of the cranks, but no one has taken it quite as far as Otso. 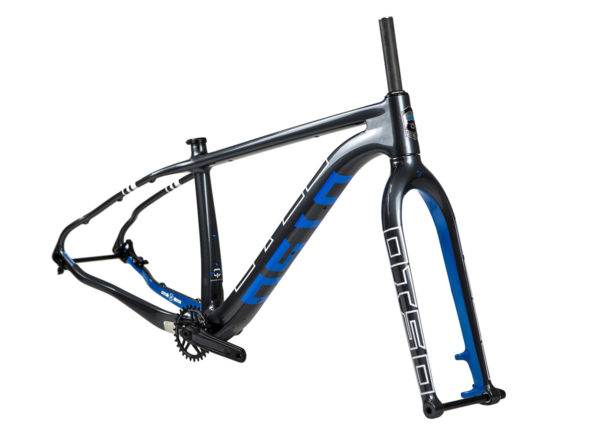 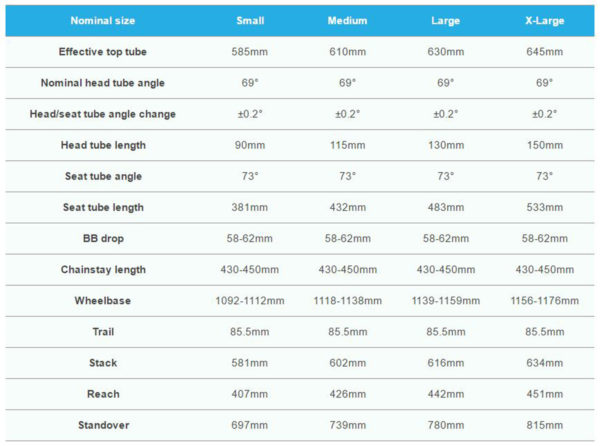 Rather than using a 100mm threaded (PF 121) fat bike bottom bracket and flipping the chainring, the Voytek runs a PF 107 shell which is equivalent to an 83mm threaded shell. When used with a Race Face Cinch crank and their 83mm/PF 107 XC spindle (RF149), the Voytek’s Q factor is dramatically reduced from your typical fat bike, yet it still clears up to 4.6″ tires with a 177mm rear hub. Officially, the Q factor on the Next SL 107 cranks is 183mm while the Race Face Aeffect cranks for the bike are a bit wider at 189mm. Compare that to the 177mm Q factor for a standard Boost crank with a trail spindle, and you can see how much closer it is than the 203/205mm Q factor for Race Face Next/Aeffect fat bike cranks.

In other words, Otso worked some serious geometry Kung fu to create one of the most pedalable fat bikes ever. 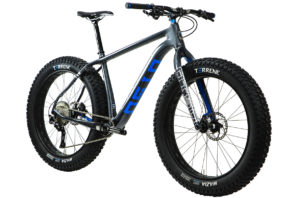 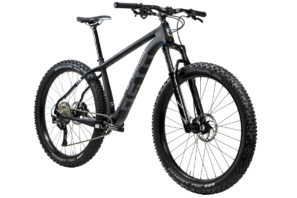 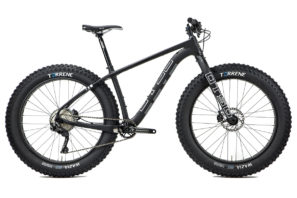 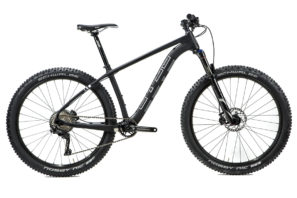 That Q factor isn’t just for fat bikes though. Many people are building up plus size wheelsets for “summer wheels” on their fat bikes, but with the same massive Q factor and geometry concessions. The Voytek’s tricks make it into a plus bike that you actually want to pedal during the summer, and one of the fastest fat bike builds around. Admittedly, even I built up a plus set of wheels for my Borealis Echo, but after a few rides on it, the additional Q factor made it awkward to switch back and forth between other bikes in my stable during the summer meaning I haven’t used them much.

Combined with different forks, you can truly build two bikes in one, with geometry to match. Fat bikes will be built around a 100mm suspension corrected rigid fork or 100mm travel suspension forks. For plus builds, Otso recommends bumping up to a 120mm travel suspension fork with 27 x 2.8″ tires for the ideal geometry. The longer fork slacks out the head tube by 0.5º and will slightly raise the BB to compensate for the smaller tires. Otso will even sell the Voytek in a 29+ configuration which the frame will accommodate, though the bigger tires will raise the BB slightly and you will mostly likely have to use the middle or rear dropout position. 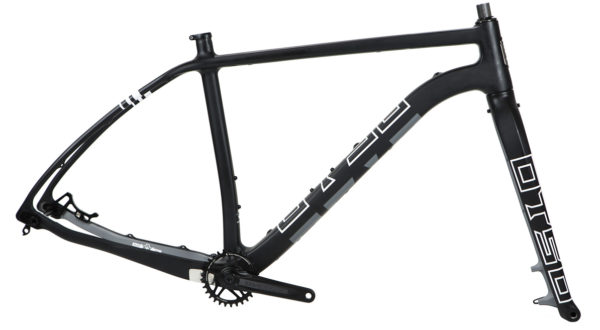 Designed with a full carbon frame and fork, the Voytek uses guided internal routing for the rear derailleur and stealth dropper post and external routing for the brakes. The frame uses an internal IS41/IS52 tapered headset, is 1x only, and uses a 30.9mm seat post. Offered in two colors and in frankset (frameset + crankset) or complete fat or plus builds, pricing will start at $2299 for the frankset (frame, carbon fork, headset, crankset, bottom bracket, 32t WTC CAMO ring, and seat post clamp) and $3899 for complete rigid builds and $4199 for complete suspension builds. Each build is also eligible for a number of upgrades or add ons so you can bling it out or order two wheelsets to be ready to go with either size.

Just like the bike there are a lot of options when it comes to ordering a Voytek. There’s even a shipping option – free shipping is available if you want it shipped to you completely unassembled, as in bare frame, parts in the box. If you’d prefer it built, adjusted by a professional, and then fit into a box mostly ready to go, it’s a $120 charge. Available for preorder, bikes will be shipping in October. 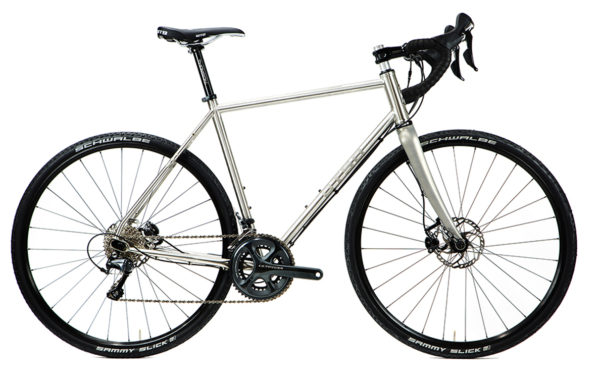 If fat/plus bikes aren’t your thing, you may want to check out the Warakin. Stainless steel bikes aren’t anything new, but stainless bikes in this price range are. According to Otso, they were able to enter uncharted territory for stainless steel frames thanks to a new forming method that gives the custom butted austenitic stainless steel its strength through the cold working process. This results in a bike with the ride qualities of steel, the snappy feel and corrosion resistance of titanium, and a price that is easier on the wallet. 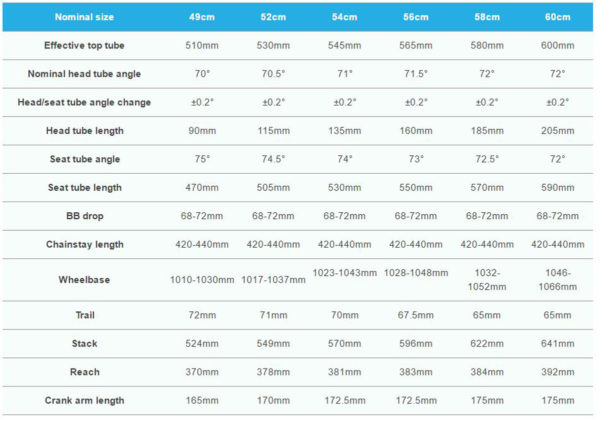 Available in 6 sizes, the Warakin is Otso’s all road monster. Thanks to the versatility of the Tuning Chip, geometry can be tailored to the intended riding – shorter, higher, steeper for CX, or longer, lower, slacker for loaded touring or gravel grinding. The disc brake frame features full length external housing for shift and brake, three bottle braze ons, rack and fender mounts, a 68mm threaded bottom bracket, 142×12 and 100x15mm thru axle dropouts, a carbon fork with a tapered steerer to match the upper ZS44/28.6/lower EC44/40.0 headset, and a 27.2mm seat post. The 490g fork is designed with a 400mm axle to crown measurement and a 47mm offset and will fit up to 50mm tires. Otso is not hiding the fact that both the Voytek and the Warakin are made in Taiwan, though they point out that each one is built at one of the premiere facilities for each frame material that produce other high end carbon or steel bikes. Complete bikes are assembled in their shared headquarters with WTC in Minneapolis, MN. 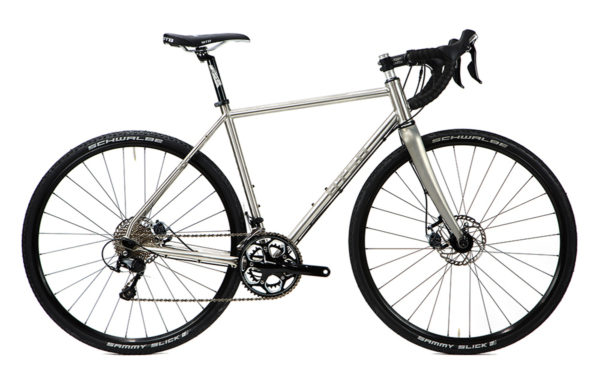 Like the Voytek, the Warakin will be sold as a frameset or as a complete. The frameset option isn’t on the website yet, but Otso tells us it will be $1,799 for the stainless frame, carbon fork, FSA/WTC headset, and seatpost clamp. Complete builds will be offered in a Shimano 105 mechanical disc brake build at $3,199 or an Ultegra hydraulic disc brake build at $4,399. Of note in the complete spec lists are a few Lithic components which is not a brand we’re aware of. Our guess is that Lithic is possibly an extension of WTC or Otso, and that we’ll find out more in the future. Complete bikes are said to come in around 22 lbs (9.97kg) depending on the build and size.

Available for pre-order now, the Warakins will begin shipping in December and include the same shipping options as the Voytek – free, or $120 depending on whether you want your bike assembled or not.

Stay tuned as we have a full build up and first review of the Otso Voytek on the way!

The trademark for Lithic Components is owned by the same company as owns Otso, so I assume it is another extension of Wolf Tooth Components

I have been test riding a Voytek all summer and it’s a game changer!

Adjustable chainstays by relying on sockets instead of friction… I dig it. Well done Otso.

Rode the demo, love it.

I got a few rides in on the Voytek in b+ format. I set several PRs at the River Bottoms. The bike is a blast, It is a fat-bike frame that rides like a regular hardtail. It just begs to go fast. I really like that you can run the rear wheel forward for smaller tires to keep the agile handling and still be able to run larger tires by moving it back.

Would love to get that Warakin down here in Australia, can you think about shipping it direct from Taiwan for International customers…..US Shipping is $$$$$$$$.
Love the idea of the tuning chip, will really give that MASON Bokeh a challenge

i have a fatty. Yes, the q-factor drives me nuts.