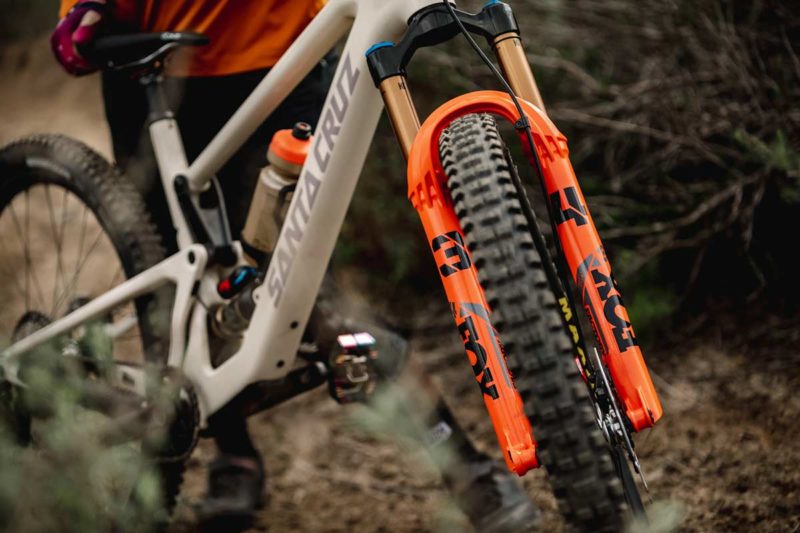 Today’s Patent Patrol once again takes a close look at a Shimano invention. Shimano files more patents than perhaps any other company in the cycling industry. This time, they have filed a patent regarding an electronic suspension control that, according to patent language, will “improve the usability of the human-powered vehicle.”

While Shimano damns with faint praise here, this is actually pretty cool. The patent outlines a system that can electronically adjust your suspension’s stroke length, and its sag, based on data the system records. That means your fork stroke and sag can change to accommodate climbing, then automatically adjust again for the descent.

The patent illustrations show the device being applied to an e-bike. It appears too that the suspension control outlined in the patent is intended for e-bike use. There is, however, nothing to indicate the system couldn’t work on other types of bikes that feature suspension.

What does the electronic suspension control do?

FIG.4 outlines a two-chamber damping system with an electronically-controlled valve in between to control the flow of fluid between the two chambers. This adjusts stroke and sag.

Shimano’s system appears to comprise of two distinct functions. First, the control senses relative position information (i.e. what your fork’s doing right now). That means the sensor knows when your suspension is inactive and the hydraulic chambers are essentially in equilibrium.

Second, the electronic suspension control gathers data about how the suspension has moved after it has been activated. The rider will likely have to do this manually by compressing the fork. 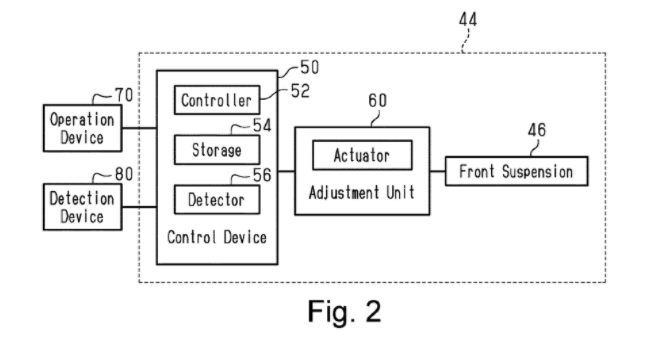 This flowchart shows the general function of the electronic ‘brain’ of the system. 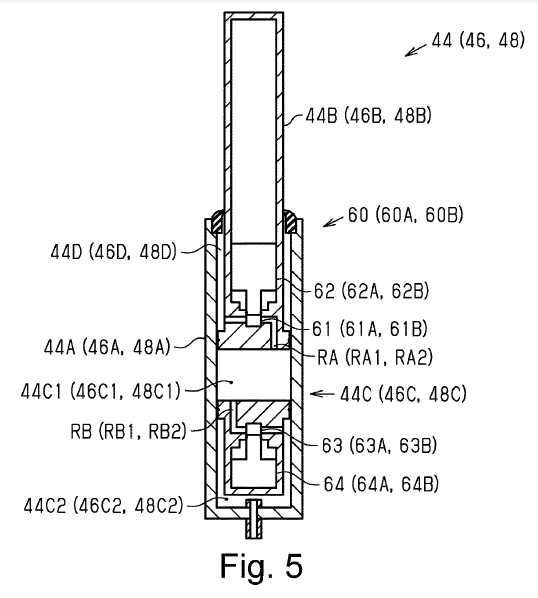 FIG.5 shows a rear suspension system with three air chambers. Two valves control the flow of air from one chamber to the other, thereby adjusting the shock’s stroke.

The electronic suspension control features a computer, of course. Since this appears to be a device designed for e-bikes, it’s likely that the control might integrate with an existing head unit that controls the e-bike itself. But that’s not outlined in the patent specifically. So it’s possible this is an independent computer too. That would make sense for use on “analog” bikes.

There’s also a detector, which is used to detect the relative position of your suspension. Inside the suspension itself, the electronic suspension control includes a valve that opens and closes to control the flow of hydraulic fluid between chambers in your suspension. This is the physical device that will either allow the suspension to move or to restrict its movement. 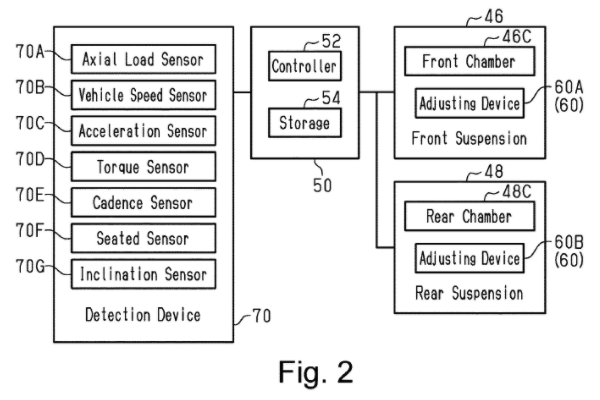 FIG.2 shows another electronic schematic. This appears to outline some of the data that the computer system records in order to make adjustments to the suspension (left column).

That means the system could automatically lock out your suspension when you don’t need it, and activate it when you do. It also means the fork’s stroke can shorten or lengthen depending on the situation at hand.

This describes the function on the damper side. Shimano has also filed a patent to accommodate the electronic suspension control system on the air side.

The air side works in a similar fashion. A control device activates a valve to allow the transfer of air from one chamber to another. That’s how the stroke length gets changed.

There are three air chambers in this configuration, with two separate valves. It’s not entirely clear what that small third chamber is for (labeled 44c2 in FIG.5), but it could be a bottom-out chamber. That would provide some movement should the system be essentially ‘locked out’ while the system encounters an impact.

The sensors in the electronic suspension control system simply determine whether you’re riding uphill, downhill, or on a flat section of trail. It then references its data tables to change your suspension sag and stroke based on those conditions.

How is the electronic suspension control different from Live Valve? Fox’s Live Valve system senses when your suspension encounters an obstacle. Then, within 3 milliseconds, it automatically opens the valve to allow the suspension to move. It’s lightning-fast. That means your suspension can firm up when you’re not encountering obstacles, then instantly become supple when you need it.

Unlike the Fox system, the Shimano electronic suspension control isn’t about lightning-fast reactions to impacts. Instead, it’s all about changing your actual suspension tune to accommodate the climbing position and the descending position. It changes the actual stroke length and sag of your suspension, whereas the Fox system does not change its stroke length or sag; it simply reacts to impacts in real time. 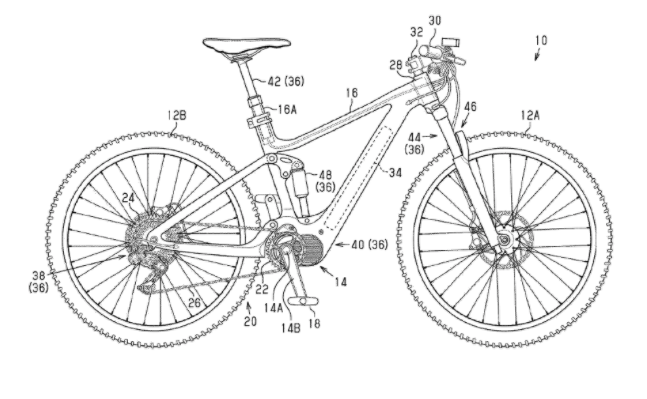 This image outlines the suspension system’s routing and components. It’s not exactly easy to decipher, but shows the general location of key components.

Yes, definitely! XC riders can probably spot why already. Imagine you’ve got a long climb ahead of you. Being able to reduce the stroke of your fork gets you in a better position to tackle that climb and reduces suspension movement. Then, when you need more travel, the electronic suspension control automatically makes those adjustments so you can take advantage of your suspension’s travel on the descents.

The question is whether we’ll ever actually see it on bikes, and on what bikes it makes most sense. It doesn’t appear to be coincidence that the patent shows an e-bike illustration. This system would certainly make sense on such bikes that are often exceptionally heavy and sometimes difficult to control as a result of that weight bearing on suspension systems. And extra torque from pedal-assist systems have an outsized effect on suspension in the best conditions.

Time will tell. But e-bikes and XC bikes seem like the most obvious audiences here. That is, of course, if the system can actuate quickly enough for racers to find it advantageous.

I’ve been a believer for a long time that I’d prefer to let the fork sag in deeper on climbs, but shorten the stroke of the rear to counteract rearward tilt when climbing.

Similarly, any steps to preserve the geometry of the bike descending – letting the rear sag in further while offering a more supportive front end on VERY steep descents).

I’m assuming there are much wiser engineers than me finding ways to prevent looping out on climbs and OTB events on descents. Buuuuut it’s always nice to holler at the general public on the internet on occasion.

You lost me at ‘analogue’. Why can’t you just call them ‘normal’ or ‘regular’ or even just ‘bikes’?
Sounds like cool tech though from what I did read.

I like it! And hope soon will everything be AI monitored and directed.
Just imagine: you ride an ebike with all the possible gadgets , you have your vr glasses on and muscle stimulating pads….you don’t even have to ride, you can just…I don’t know…sleep while on the bike because everything will be controlled by the technology….then when You wake up, you have already a fine memory on riding the ride ride of your life.
I have seen this movie, what was the name again, where people dreamed to be alive, but they wasn’t because there were in the M….X
You know wha?t: I’ll just grab my old school PZ Racing with 3×9 XTR, Crossmax SLR,still v-brakes hehe, carbon fork etc. And take a ride, just for fun , without electronics, GPS, Strava, pulse and watt crap, electronics, and sensors all over the place, and have just fun, the way I want. I’ll bike. But: it’s fun to could read about how we change the bike world to it’s worst. Have fun with it, I’m outta here