Before you fire up the ol’ comment machine and launch into your arguments why a bike doesn’t need a parking brake, get your mind into mobility mode. The cycling world is changing around us, and Tektro’s patent filing for a bicycle parking brake appears to look ahead to a bright mobility future.

Why would a bike need a parking brake? 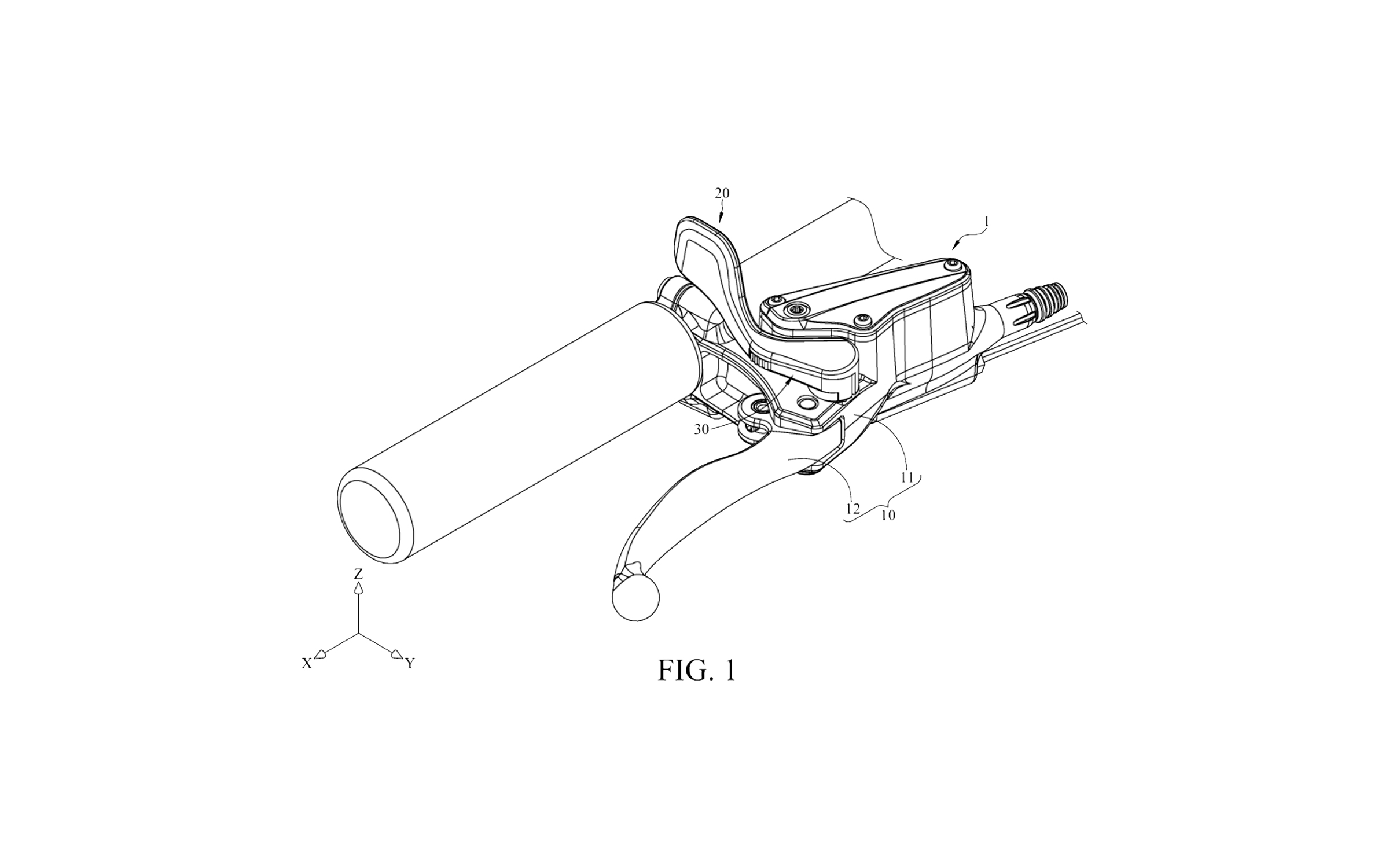 The Tektro parking brake looks like any other brake lever, aside from the two extra levers on top of the master cylinder. One of the levers here is nested within the other.

You probably don’t need one on your mountain bike ride. Your road or gravel bike? Forget it.

But what about the massively-growing e-bike market? How about cargo bikes? Both of those categories of bicycle tend to be fairly hefty. Batteries of course add weight, and when a cargo bike’s loaded down, it gets heavy even for the muscular folks among us (I don’t count myself in this group).

Tektro’s parking brake patent spells out a system that would allow a rider to apply the brakes and keep them applied. That could come in handy when parking a heavier bike on an incline, for example.

What’s new and nifty about the parking brake 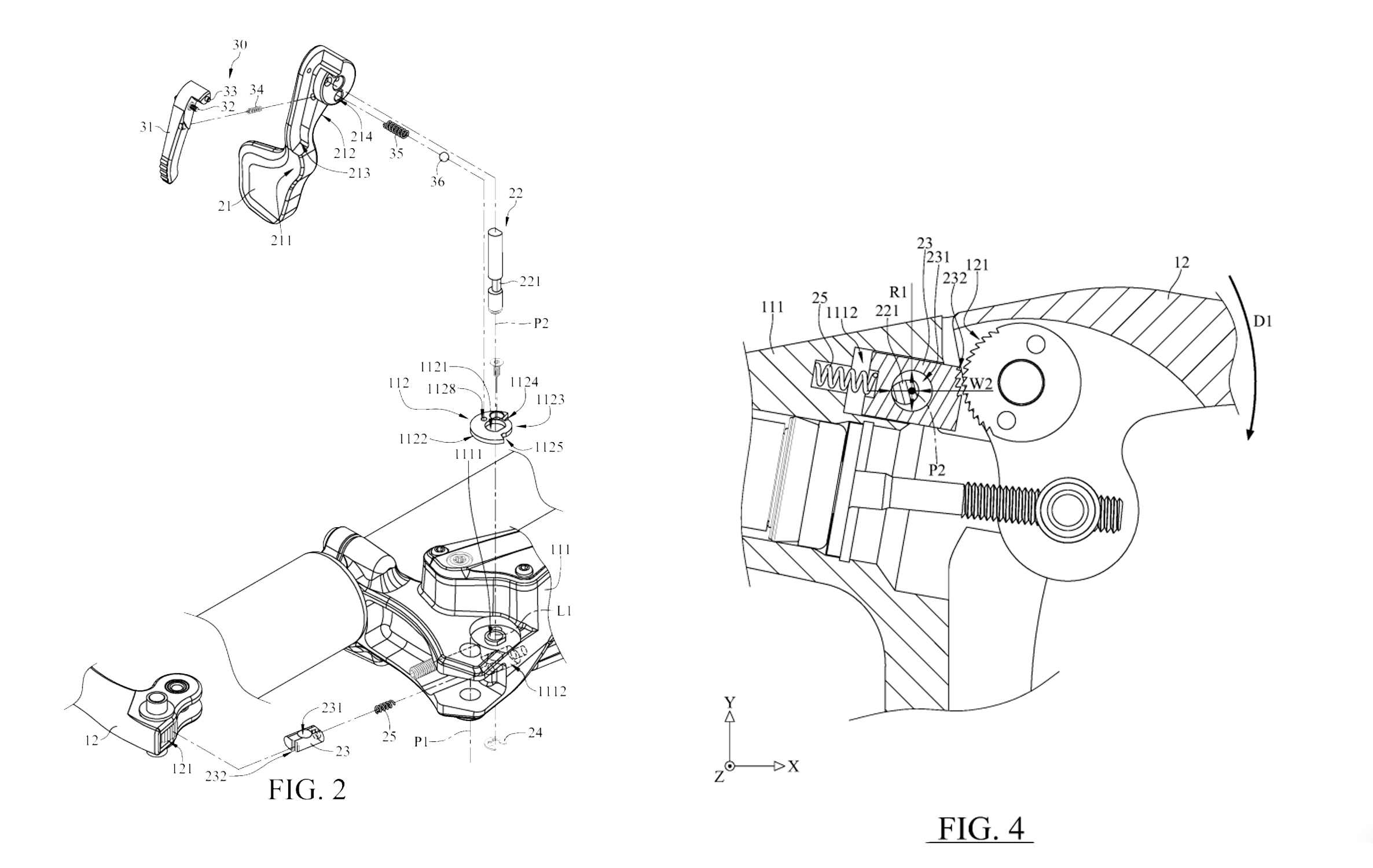 The image on the left shows the blown-up diagram of the parking brake’s components. FIG.4 on the right shows the ratcheting system.

Of course, parking brakes aren’t exactly new, even on bicycles. But Tektro’s parking brake patent outlines a system that prevents a rider from accidentally releasing the parking brake.

The parking brake lever is actually two levers, one nested into the other. When a rider pulls the main (larger) lever to activate the parking brake, the smaller, nested lever lags behind, opening up a gap between the two levers.

In order to do that, the rider needs to pull on the smaller, nested lever to return it to its nested position and disengage the parking brake.

How the Tektro parking brake works

But when you start to pedal, the teeth lock into place, preventing the freehub body from moving freely within the hub shell. That’s how you transfer power.

The Tektro parking brake operates on a somewhat similar system.

Will we see it? And do you need it?

This nifty system looks pretty darn viable for a lot of applications. I don’t imagine we’ll see it crop up on most road, gravel, or mountain bikes. But as cargo bikes continue to crop up in urban areas, and e-bikes grow in popularity, the Tektro parking brake may very well find a home on commuter bikes in the near future.

Do you need it? For most riding situations, probably not. But it’s not difficult to think up situations in which such a parking brake would come in handy. Parents who tote kids around on commuter bikes would certainly appreciate a parking brake. E-bike and commuter bike riders too. And it seems like a no-brainer for anyone who owns a cargo bike, particularly in hilly areas.

VeloNews ‘used to’ have a writer named Dan Cavallari. 😉

This would be nice to have on my town bike, especially when I’m pulling the trailer.

Smart idea for really any bike with a kickstand. Surprised I haven’t seen this before.

This could be useful if it was designed to also be able to keep the brakes open. For example: when the front wheel is off, and an accidental lever pull could push your pads together.

Toe straps work for this function as well and are compatible with every brake lever.

I see your parking brake and raise you a tech-77

Or maybe as a drag brake control for heavy bikes like cargo or tandems? Way back when, cantilever braked tandems would have an additional drum rear brake controlled by a friction shift lever. The drum brake could take the heat of being constantly engaged to control speed on a long descent.

Use this ratcheting lever to apply constant braking on the rear disc. Does the normal brake lever itself operate independently of the ratchet lever mechanism allowing rear brake modulation and temporarily increased brake force while returning to constant braking when the lever is released?

I like the idea of having a parking brake. For me, I keep a velcro strap wrapped around my seatpost just for this purpose. If I’m taking a train with my bike, the ability to lock the brakes makes the bike a lot more stable when the train is moving.

These could be absolutely HUGE in the recumbent trike game. At my old shop we did tons of swaps on trikes to include some cheap sunlite levers that had parking brakes. At the time one of the major mid-luxury trike company’s solution was a velcro strap. Super lame on a $2500+ product.

There are also some dia-compe levers that have locking mechanisms from some BMX parts companies, some of these were much nicer than the cheap sunlites, obviously.

Is this going to be available soon? Essential for tricycles and recumbents.