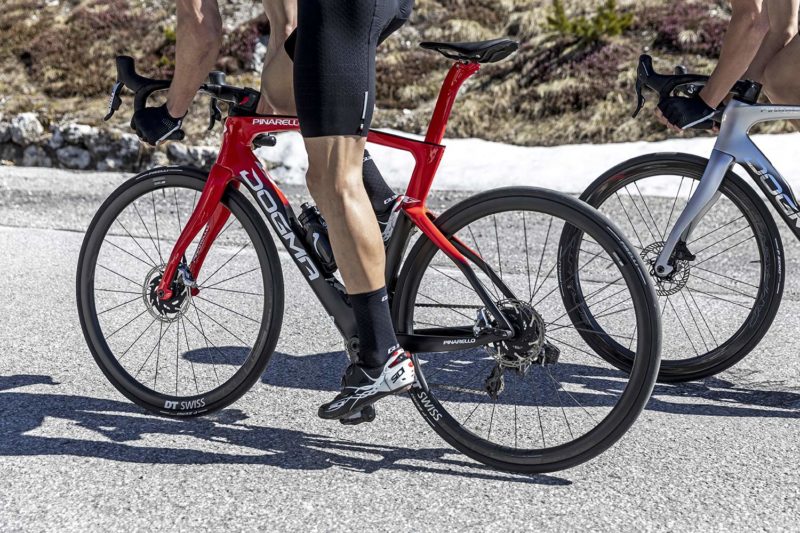 Pinarello’s new Dogma F is a lighter, more responsive, and more aero evolution of their most recent F12 road race bike. And while the overall asymmetric aerodynamic profile remains decidedly familiar with decade-running Pinarello Dogma curves, the biggest surprise may be that there it is not disc brake only. While many bike makers have gone disc-only, Pinarello pros keep winning Grand Tours on rim brake bikes, so the Dogma F continues to evolve with both rim & disc brake options…

The shape of the new Pinarello Dogma F aero road bike doesn’t appear all that different from the previous Dogma, besides a flatter top to the slightly more dropped seatstays. But interestingly the number designation gets dropped from the most-recent Dogma F12 to this new seventh-generation Dogma F in a move Pinarello says simplifies the bikes links to its long past (since 2000) and its “incontrovertibly” excellence extending into the future. 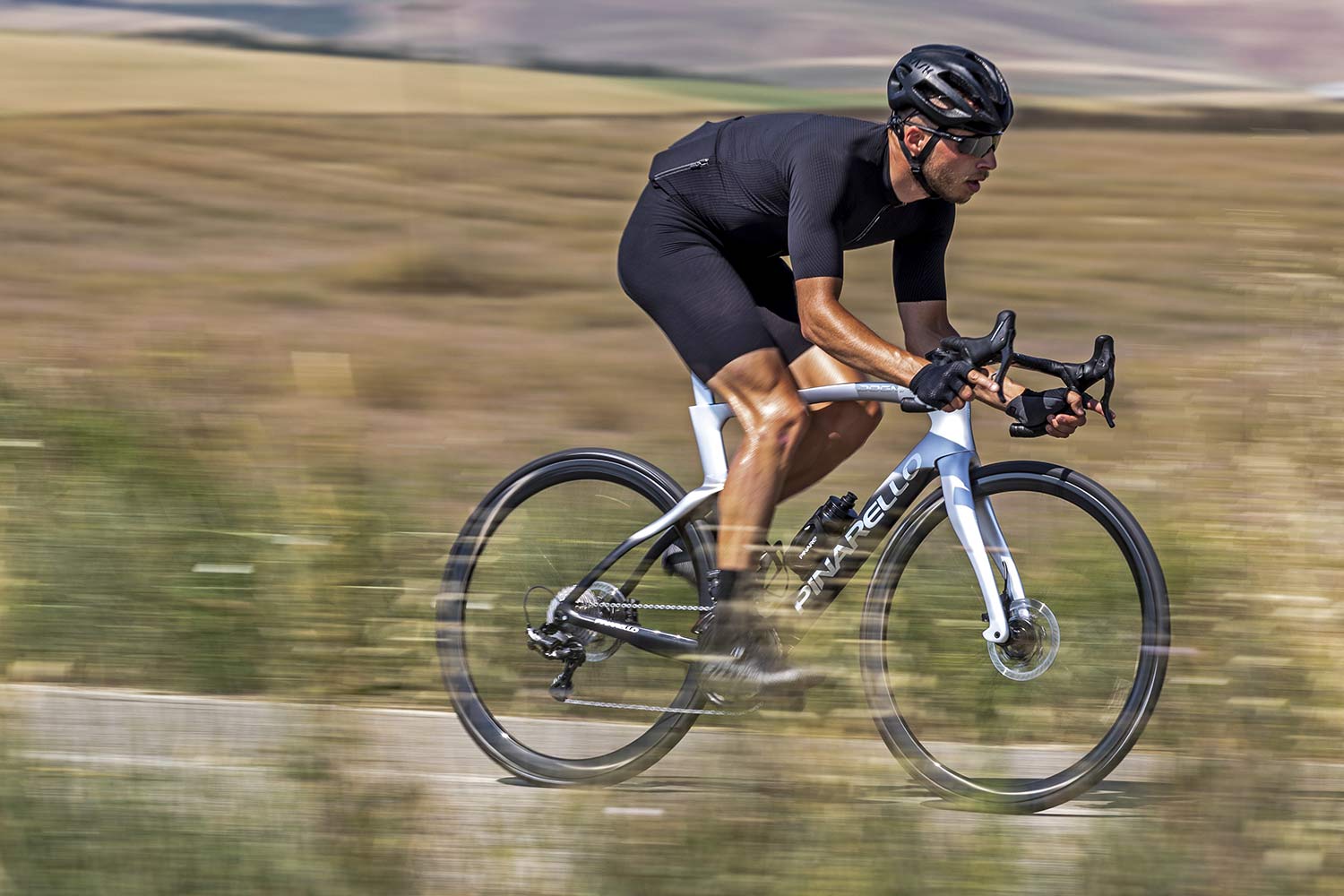 It’s also a nod to the new bike’s versatility. While previous generations had climber or sprinter-specific versions, this new Pinarello Dogma F is mean to be a balanced all-around stage racer. 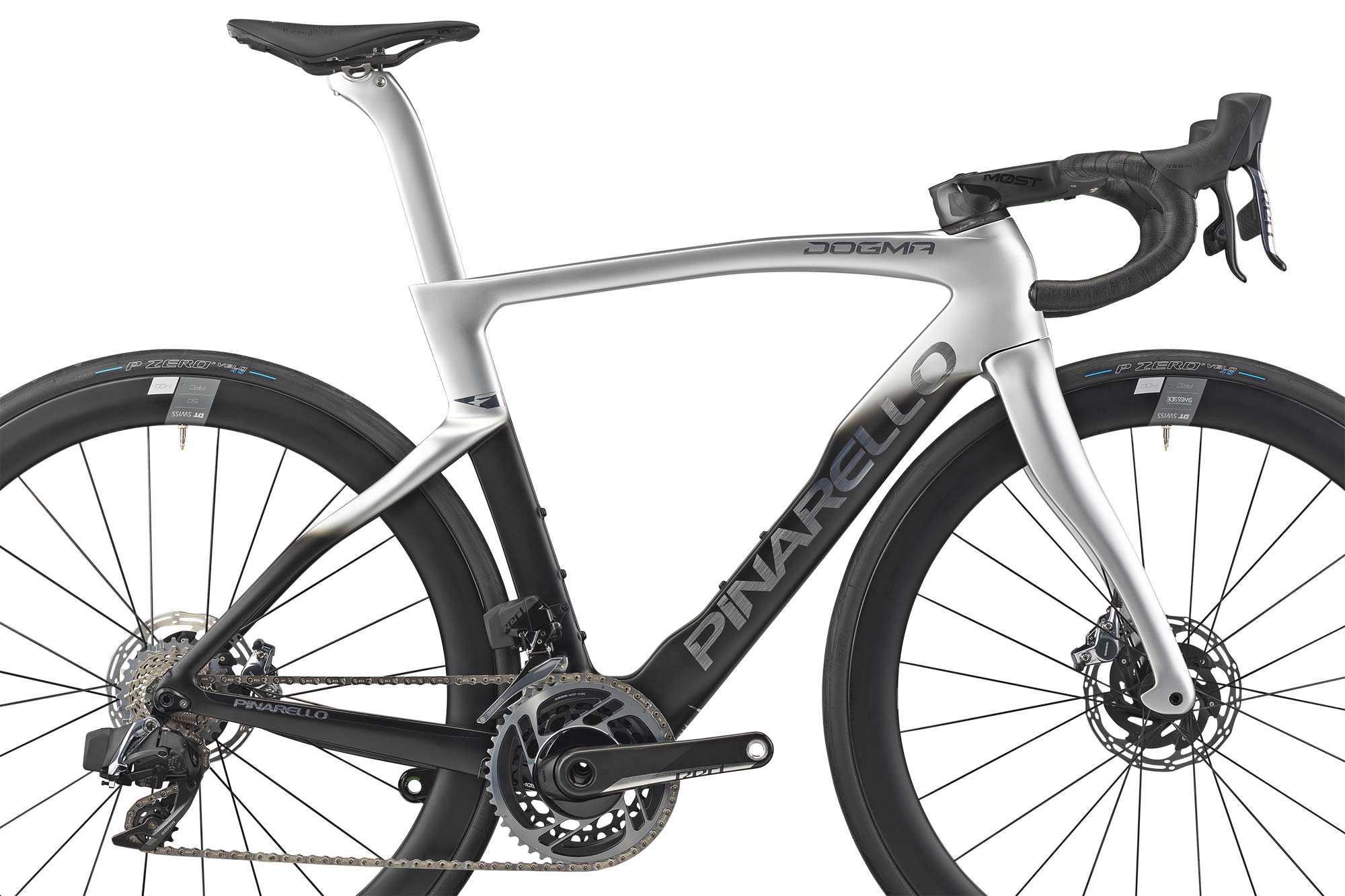 Pinarello says the new Dogma F Disc frame kit ultimately saves 265g off the F12 Disc, much of which they attribute to new 3D printed titanium components outside of the frame itself. Specifically the seatpost (-35g in the new ti head), headset (-25g), Onda fork (-58g), front thru-axle (-20g) & Most Talon Ultra cockpit (-40g) have all shed grams. The frame itself seems to hit the same ~850g optimal weight Pinarello has targeted for years (53cm), although now 12% stiffer at the bottom bracket. (Actual claimed unpainted 53cm disc frame weight of 865g, rim frame weight of 860g.)

Complete disc brake bike weights still come in at 6.8kg with Dura-Ace Di2 or 6.9kg with SRAM Red AXS & DT carbon wheels (both size 53, without pedals.) That makes them no slouch in the weight department, and guaranteed under the UCI limit with similar spec on the rim brake model. 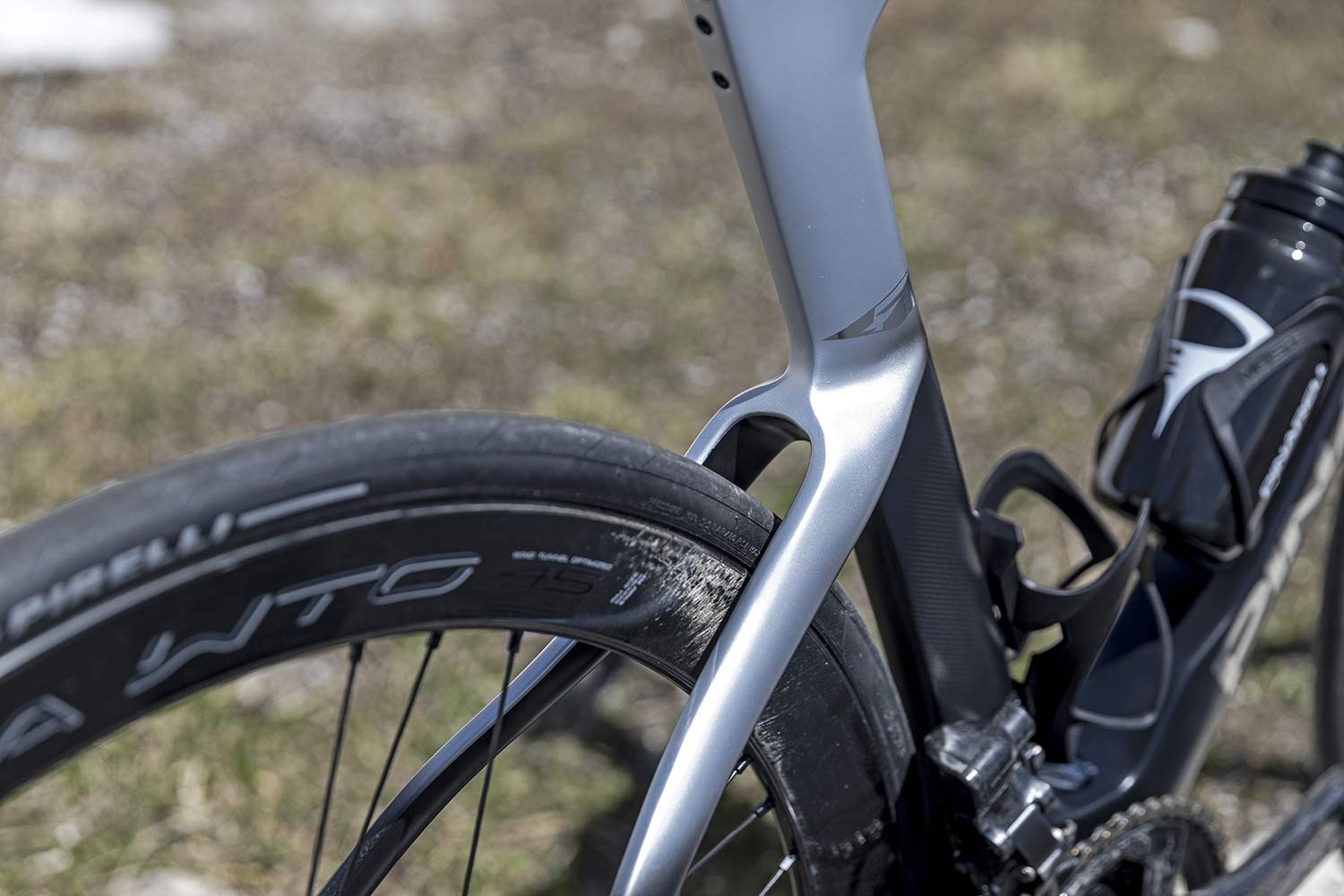 Slightly dropping the seatstays and capping them off with a flat transition to the seattube helped improve aerodynamics, while also adding some vibration-eating comfort at the saddle. 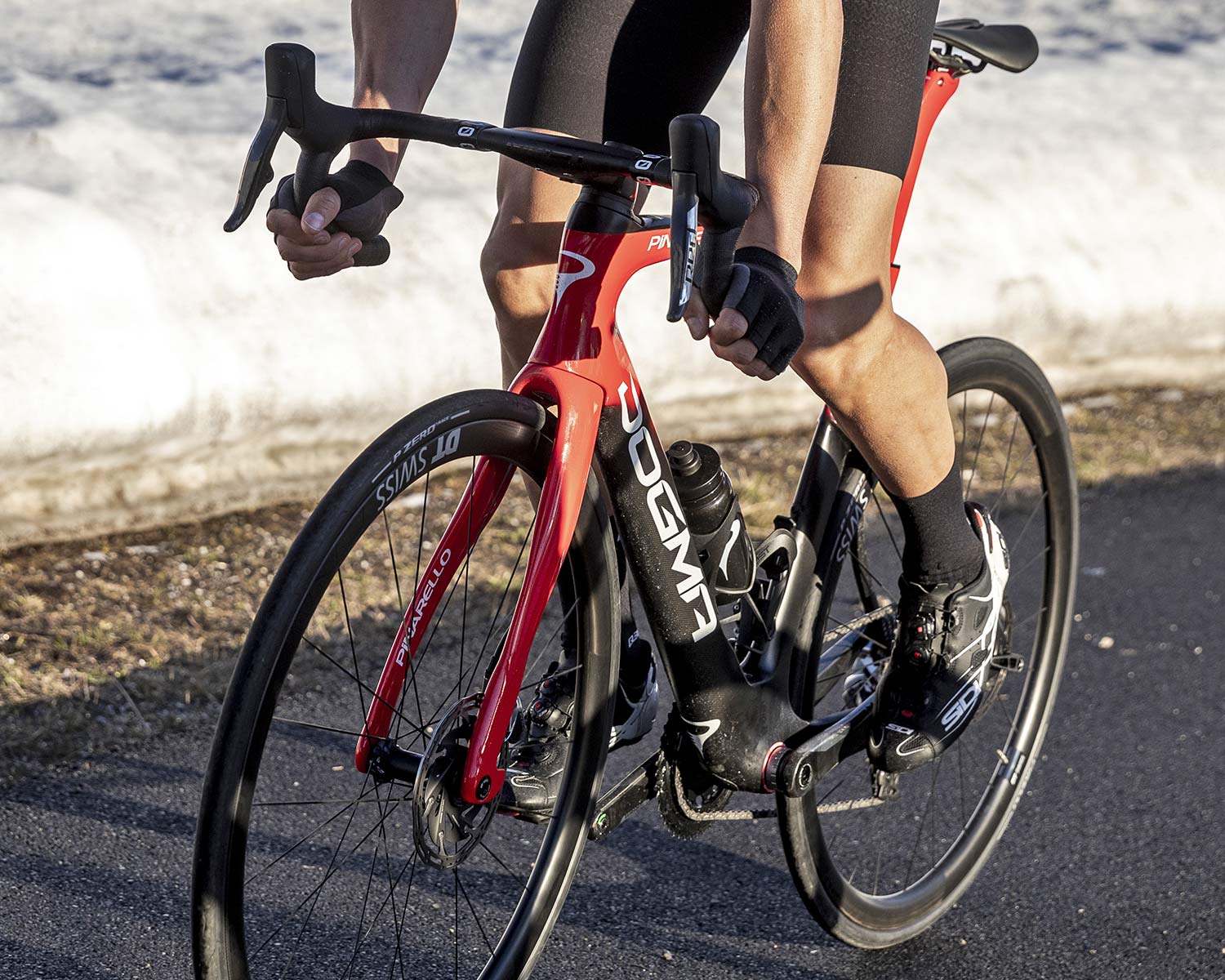 The curvy Onda fork is also all-new in both rim & disc brake variants for less drag in the wind, based off the aerofoil Bolide fork leg design.

How much faster is it really? 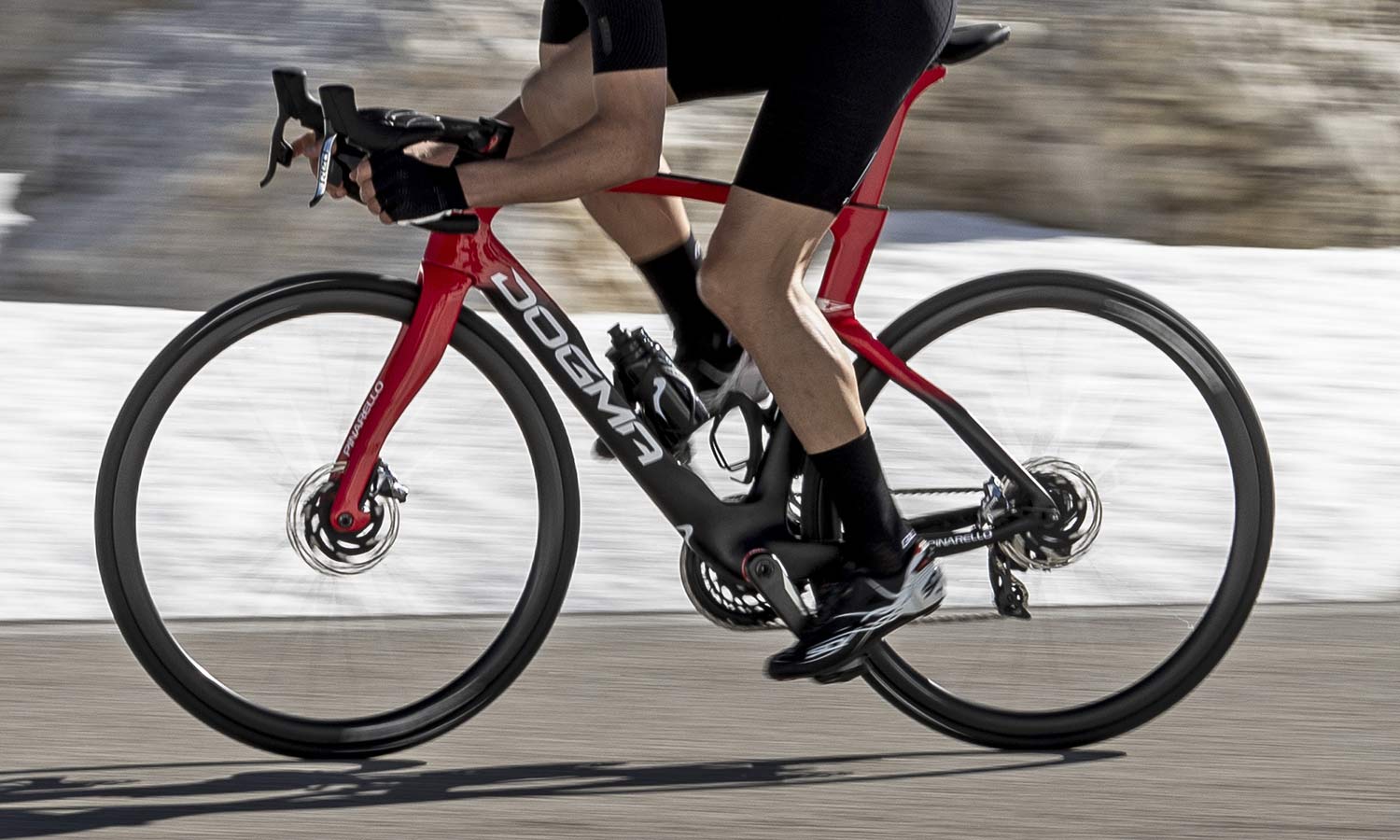 Pinarello calls out the new disc bike as being 4.8% more aero than the outgoing F12 disc. 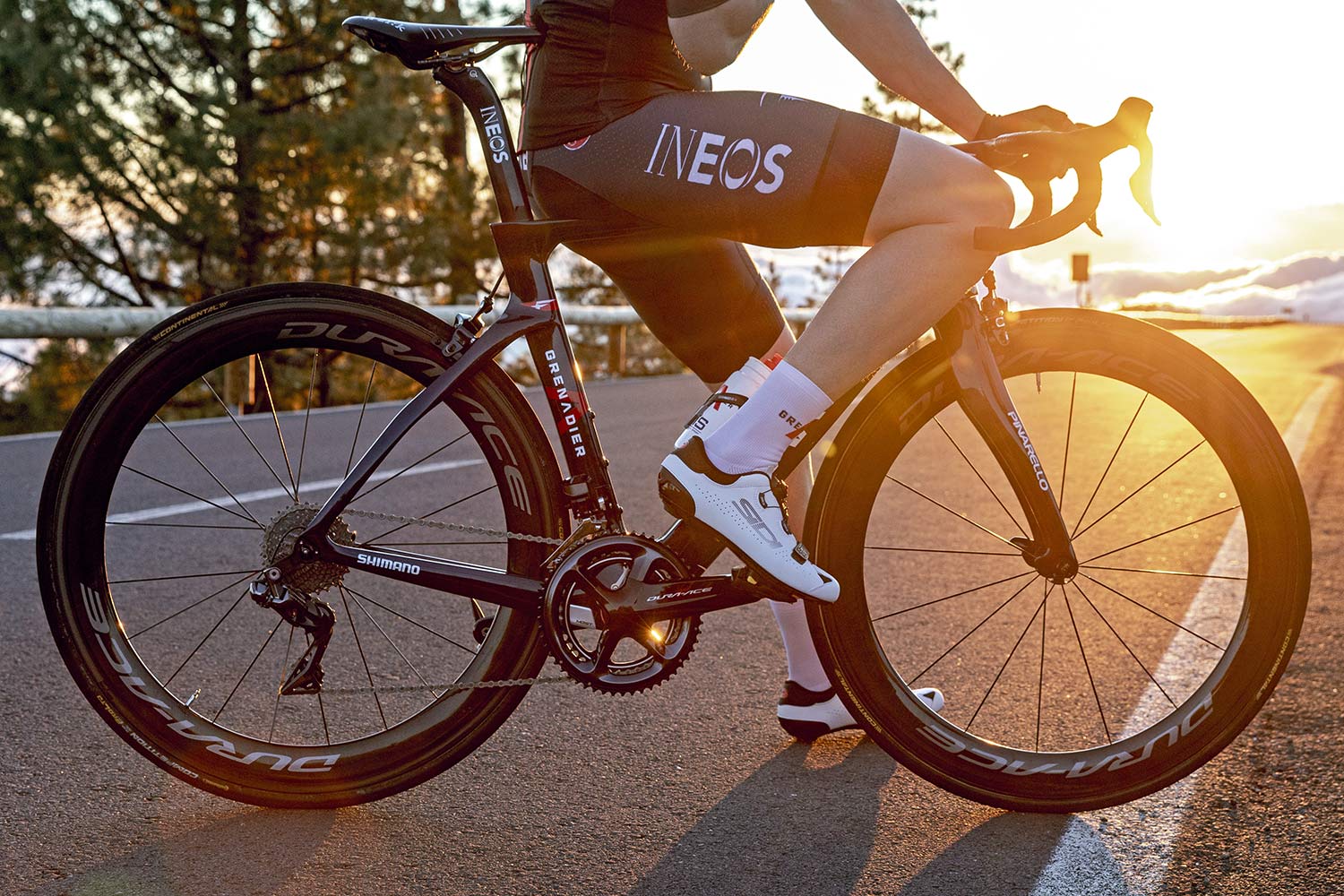 The rim brake bike is a bit faster too, getting 3.2% more aerodynamic than the rim brake F12. Those are relatively minor upgrades, but still claim up to a 2.6W savings at race-pace 50km/h, or even a 1.3W reduction at a more manageable 40km/h for the rest of us. 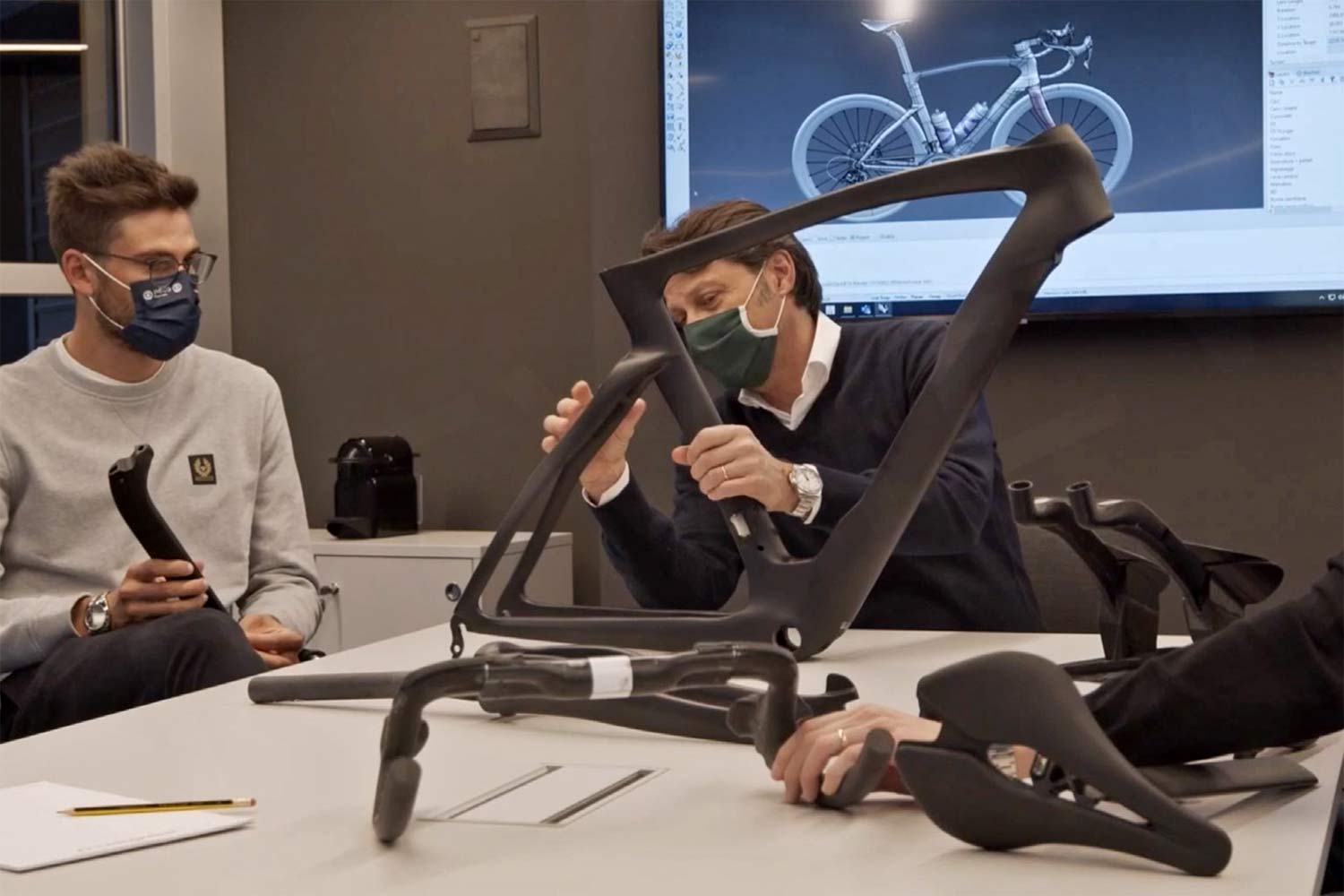 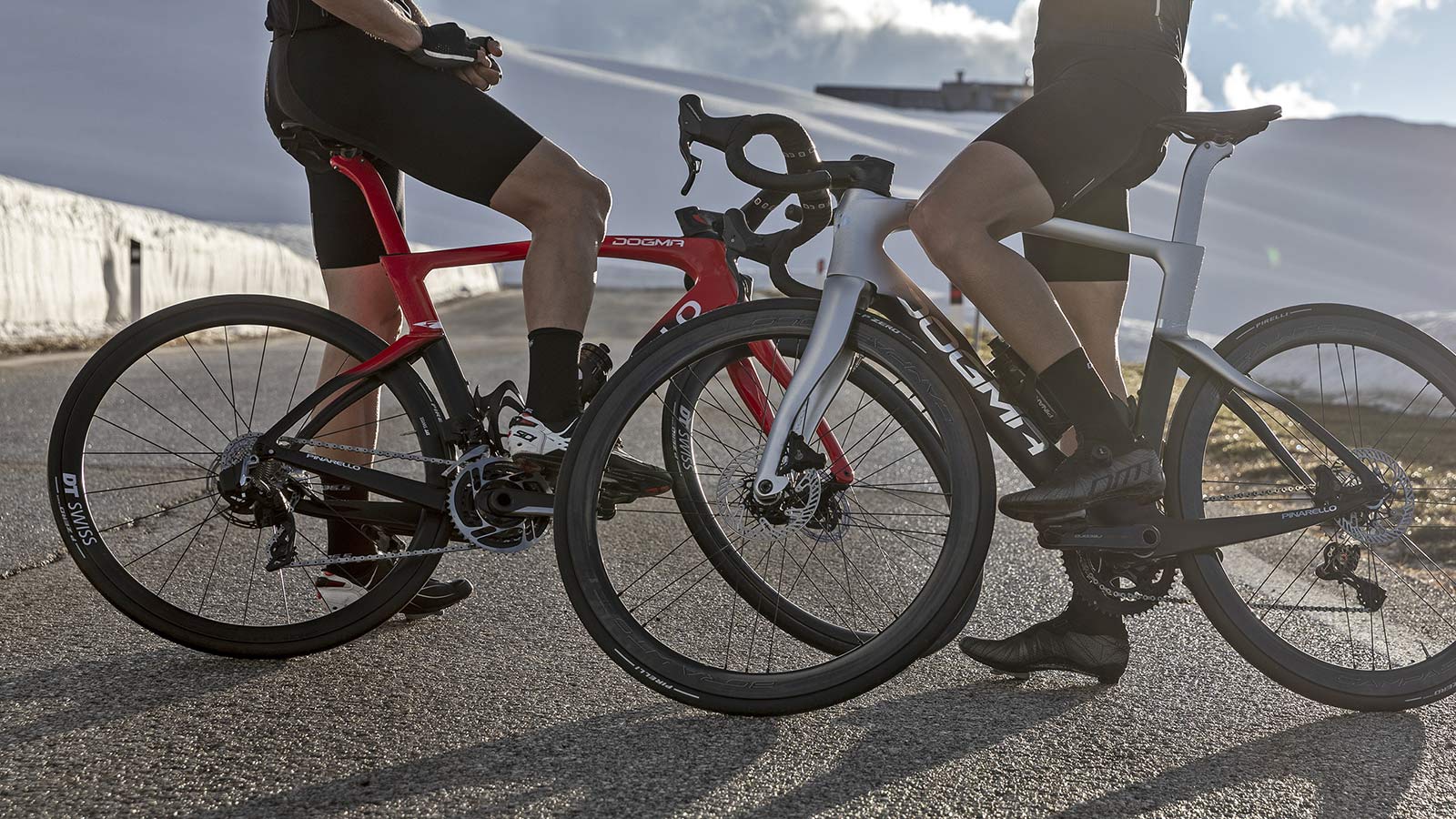 As it has been in previous generations, the new 2022 Dogma will still be available as both Pinarello Dogma F Disc and Dogma F rim brake models, although real consumer delivery is likely at least a couple of months out still. 2022 Pinarello Dogma F framesets retail for 5770€, whether you want rim or disc brakes.

Both are available with top-spec electronic drivetrains from Shimano, SRAM & Campagnolo and with carbon wheelset customization available from your local Pinarello dealer – with complete bike pricing that starts as low as 12,000€ with rim brakes, but can quickly climb to over 15,000€ with an electronic shift disc brake bike & premium carbon wheels. 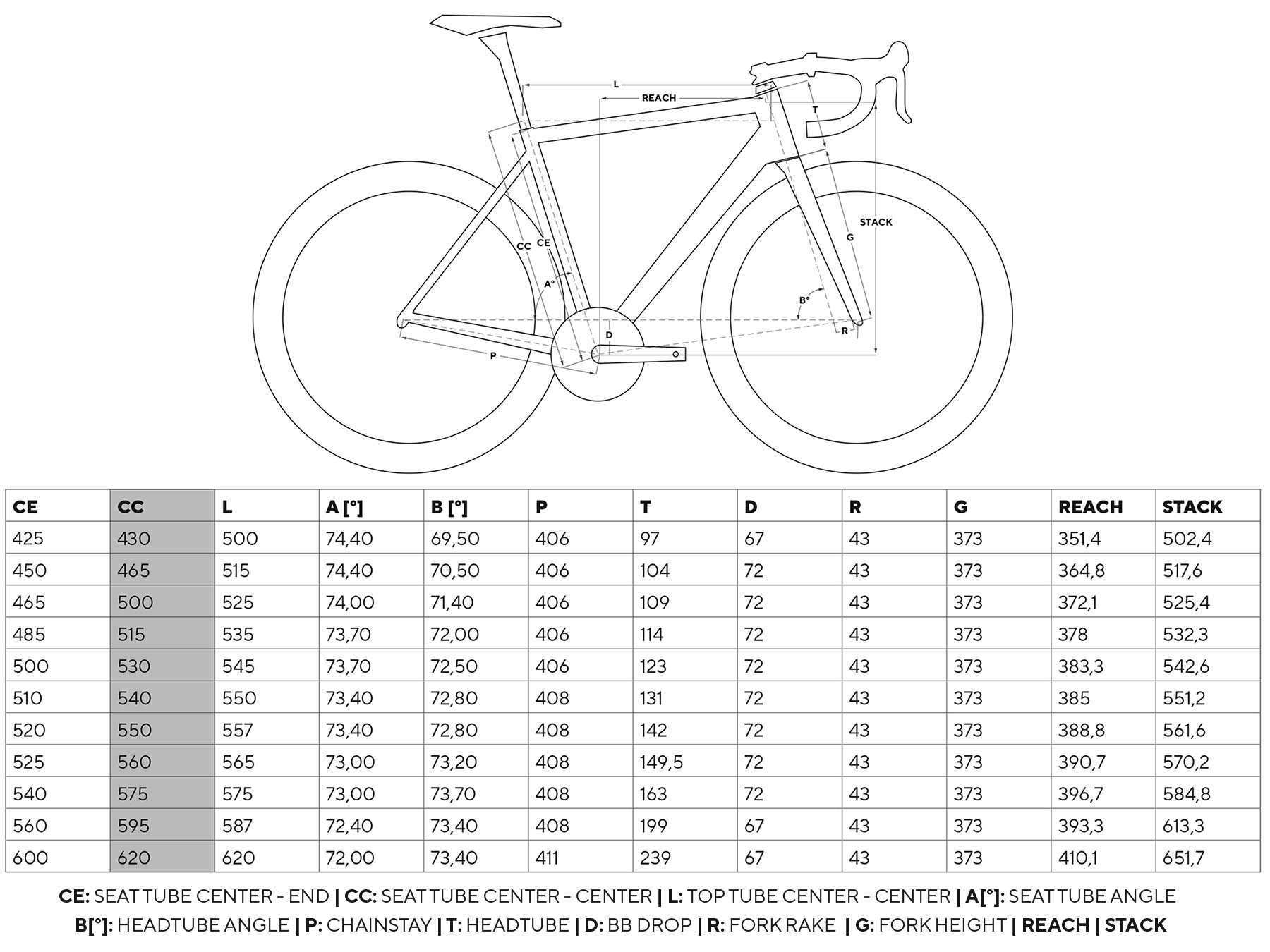 The new Dogma F is available in 11 stock sizes, 16 handlebar/cockpit sizes & 2 seatpost offsets to fit any rider. Three standard paint schemes are available – the black to gray fade Plutonium Flash, the black to red fade Eruption Red, and all black on black. 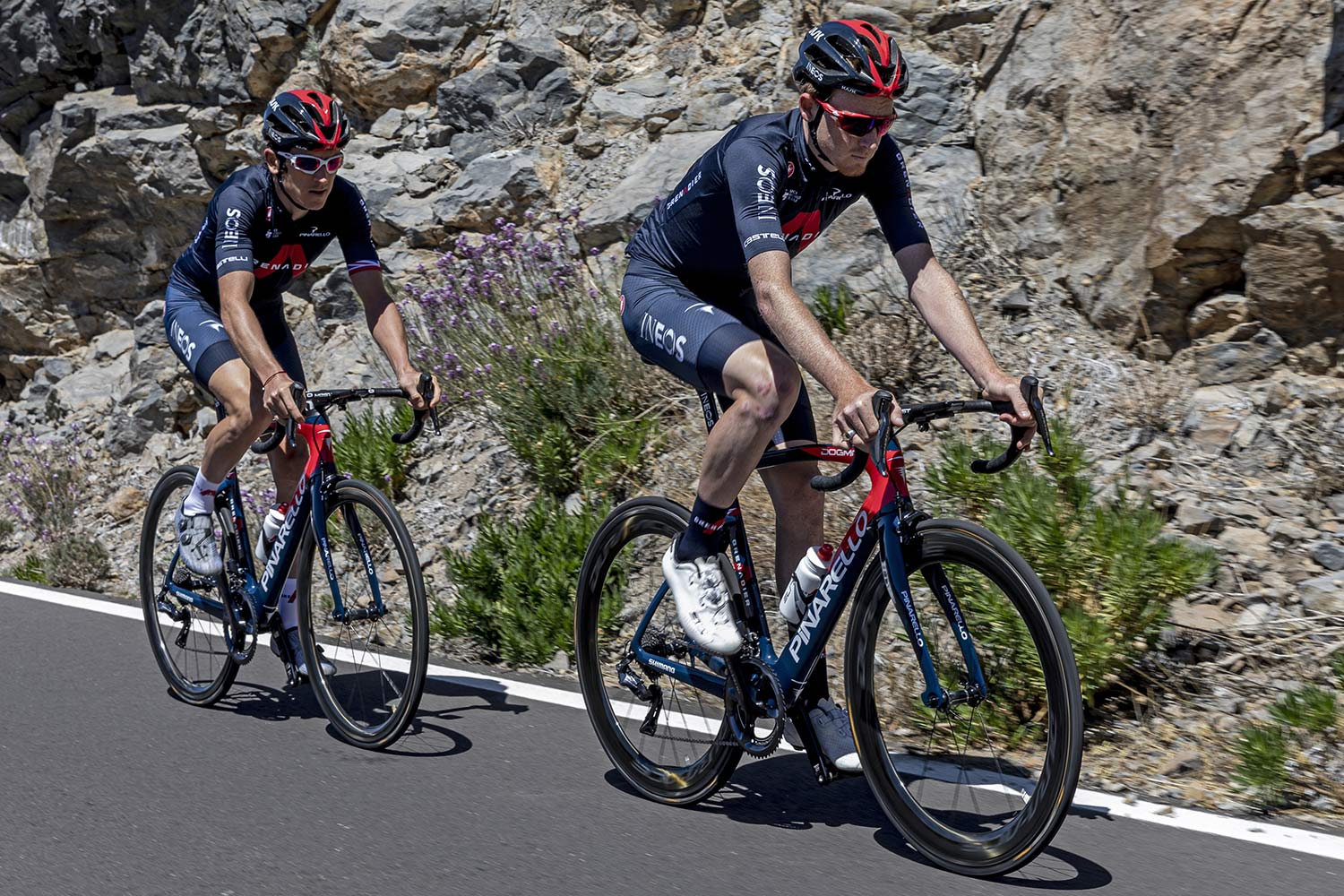 Interestingly, the only complete bikes we’ve seen with Shimano groupsets are the Grenadier team-edition bikes which are all rim brake only, and will make their Tour de France racing debut this coming weekend. We’ll take that as a further hint that new Dura-Ace groupsets should be coming soon… soon enough even that Pinarello isn’t trying to sell you a new Dogma F Disc with a Shimano Di2 group that may not be the latest version by the time your new Dorma will arrive at your local bike shop…

Update: You can now add semi-custom paint to your Pinarello dream bike with their new MyWay customization program.

Good news! The wider tire capability and disc brakes were a much needed upgrade. Bravo!

28mm+ Tire clearance? I would have expected at least 30?

@Andrew, me too, but up until now the widest tire they could fit was a 23C, LOL.
The costs associated with remolding all the sizes and models is quite high…
Most racers i see are riding 25-28C.
It’s a step in the right direction for a tradition Italian brand. Bravo!

I’m sure the numbers are meant to be reversed, look at every size leading up to it and reach increases in roughly 3mm increments.