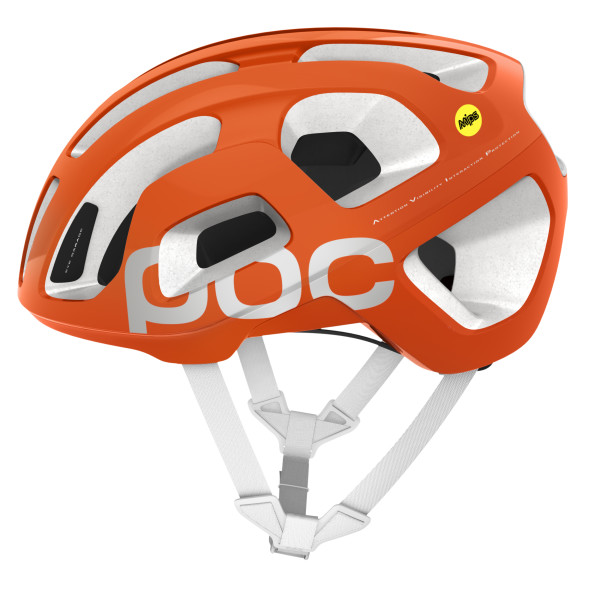 Just a few weeks ago, Scott Bikes unveiled what was called the first MIPS equipped road helmet in the ARX Plus Road. While it may have been the first we knew it wouldn’t be the last. During the launch of the POC Octal AVIP (Attention, Visibility, Interaction and Protection) helmet, one of the common questions was why not MIPS? We were told that a MIPS version might be in the works, and almost exactly a year later, here it is.

The Octal MIPS AVIP is just a sneak peek of an impressive new range of products which hopefully we’ll get to see in person at the upcoming Eurobike. For now, get the details on the new, safer, Octal after the jump… 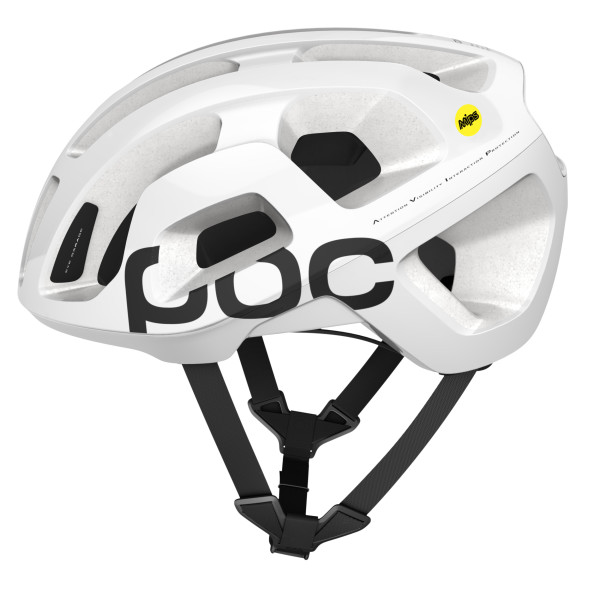 To be offered in Hydrogen White and Zink orange, it seems that POC is using white EPS foam to differentiate the MIPS from non-MIPS versions. The Octal continues with a fully wrapped unibody PC shell construction which allows POC to build a super light helmet without the need for internal reinforcement. Of course, the helmet will include the added protection of MIPS (Multi-directional Impact Protection System) which consists of a low friction layer mounted inside the helmet which breaks free and slides during the initial impact. Working within the first 15 milliseconds of impact and moving less than 15mm, test results show that MIPS helps to reduce the rotational impact to the brain.

Adding the MIPS system to the Octal results in a 20g increase in weight per size (claimed), while all of the helmet features remain the same. 2015 POC Helmets will continue their partnership with ICEdot, with ICE tags on each helmet with a scan-able QR code with emergency info for first responders.  Helmets will be sold in S,M, and L and are EN and CPSC certified. More details on the 2015 POC line up coming soon!

I have the original poc octal and love it. It’s the best helmet ever made as far as I am concerned.

I’ll be first in line to buy when these hit the market. The looks might not be for everyone but I think they look good. And safe!

i’d prefer sharper or swoopy lines like with other helmets, but that white one is hot.

Was considering getting an Octal when it came with MIPS. But i’m a little worried the white foam will start looking dirty pretty quickly. I tend to avoid white with my cycling apparel because of that.

About a month or two back I did a quick google search for info about 2015 POC avip products and got a SURPRISING amount of information. A quick check just confirmed that it’s all still there on the google if anyone is interest.

After wearing a Trabec Race for two years, this is a no brainer…

Must have one, does it come in black???

Man the designers at POC must be trippin’ all the time. Everything they make is hideous looking. UGLY you ain’t got no allibi…you ugly, you ugly, yo momma says you ugly!