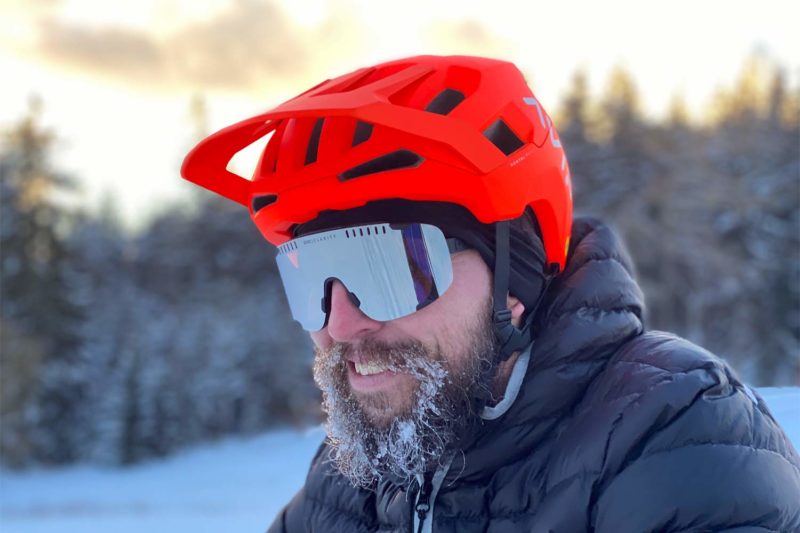 Once a helmet is strong enough to pass certification, you might be satisfied thinking it’s as safe as it needs to be, but POC’s new Kortal Race MIPS could easily convince you otherwise. In addition to exceeding normal MTB safety standards, the Kortal Race MIPS carries several more high-tech features that could be very helpful in an emergency. 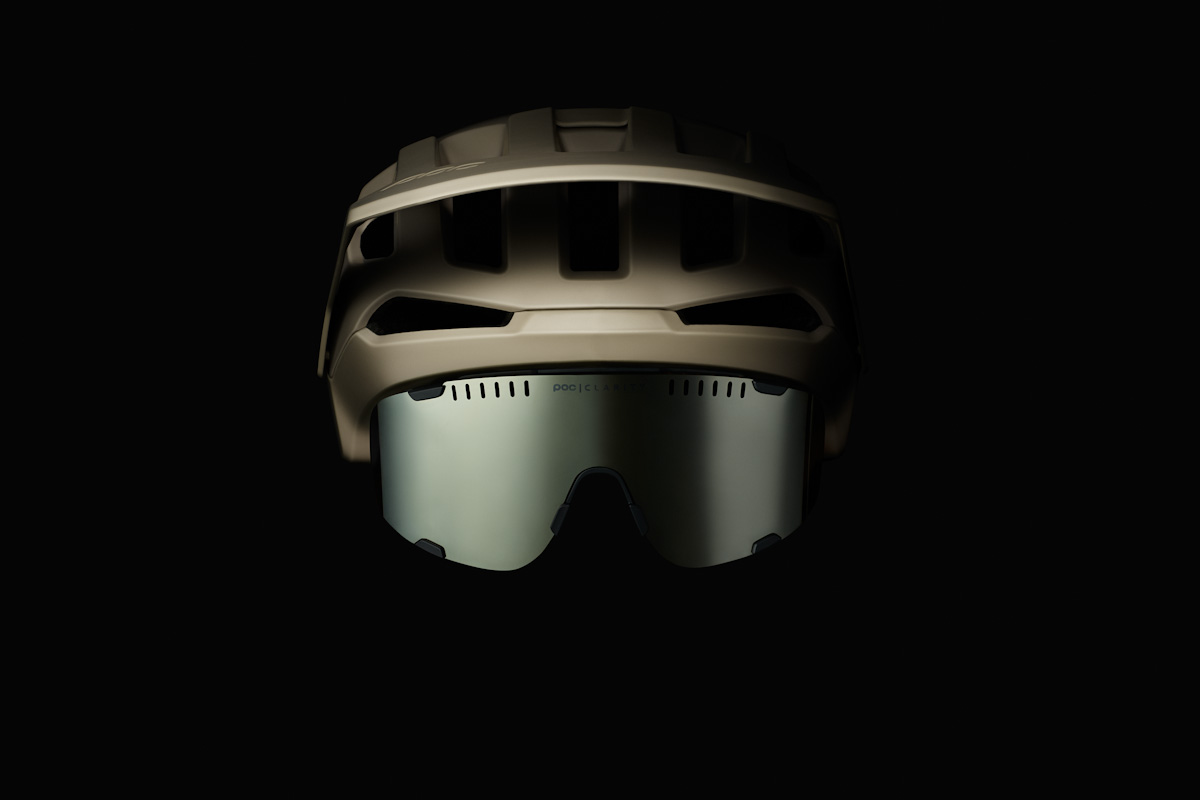 And you’ve already seen us wearing them with the new lightweight POC Ventral Lite road helmet, too…. 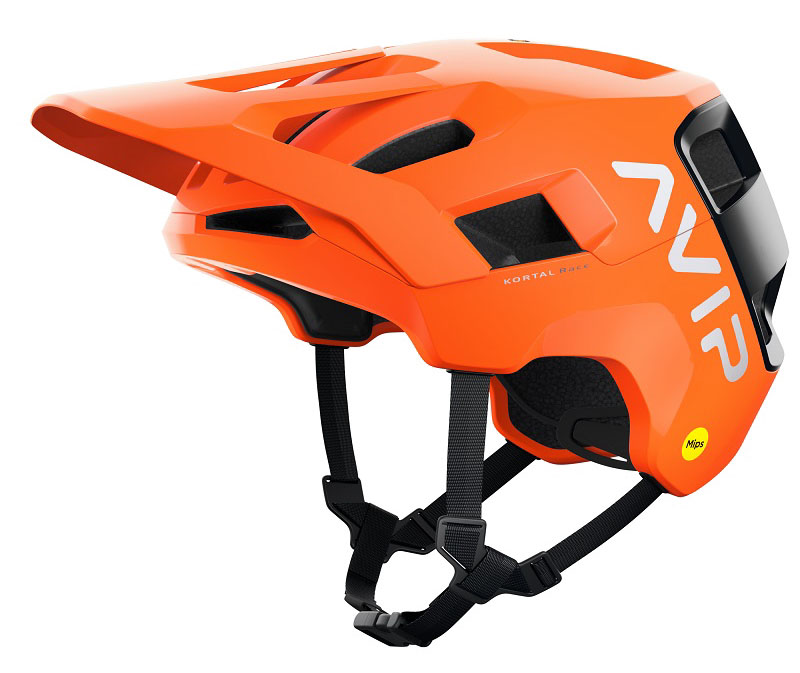 Inspired by POC’s Tectal helmet, the Kortal Race MIPS is an all-new design that bears an edgier appearance along with new construction and even more safety features. There are two models of the new helmet: The Kortal Race MIPS is the fully-featured version and the Kortal is a base model that doesn’t include a MIPS system or any of those high-tech safety gadgets. 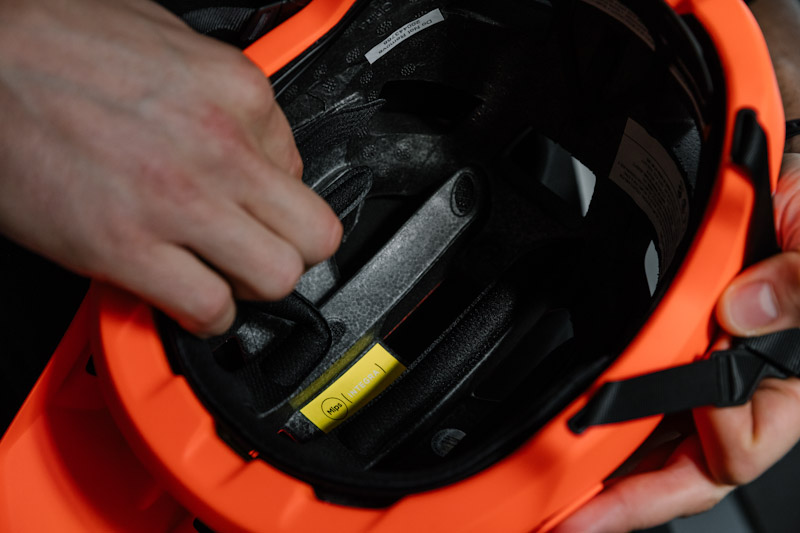 The Kortal Race MIPS uses the all-new MIPS Integra tech that we gave a sneak peek at a month ago, neatly hiding the MIPS system within the helmet’s shell. The 360° adjustment system’s rear dial can be set to three different height positions. 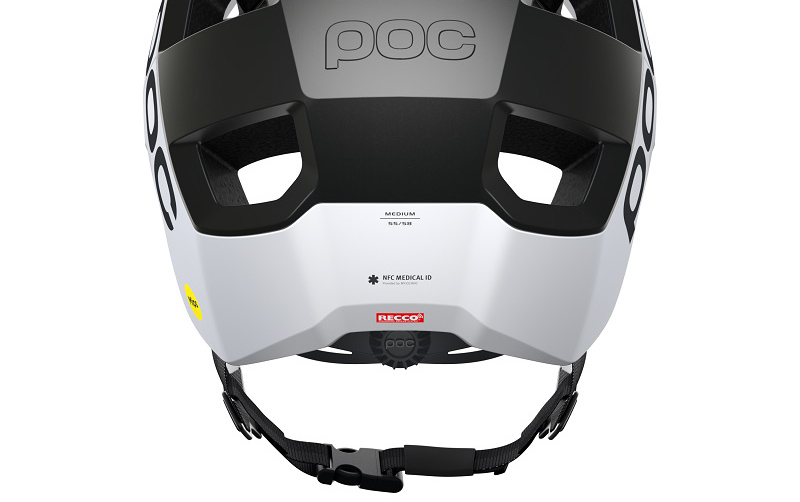 There are two nifty technical features found in the Kortal Race MIPS: The first is an integrated RECCO reflector, which helps search and rescue teams using RECCO search devices to locate you in an emergency.  The second is an NFC Medical ID chip that stores your medical and contact information, like found in the road Ventral Air Spin NFC. Should you be found unconscious or unable to communicate, the chip can provide rescuers access to this vital data. 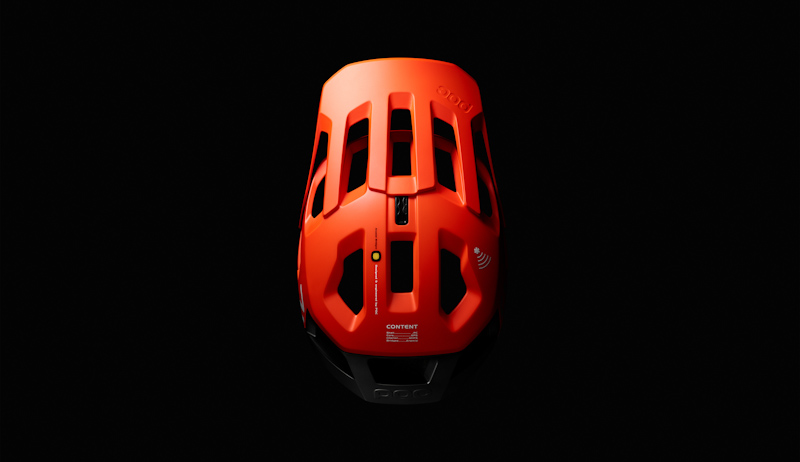 The Kortal’s shell offers plenty of ventilation (the vent layout is similar to the Tectal Race SPIN, which I found very effective), and they even made sure your goggle strap won’t cover any of the vents. Furthermore, the rear vents also act as an ‘Eye Garage’ sunglass carrier.

Over the Kortal’s EPS liner is a unibody polycarbonate shell featuring Aramid Bridge construction underneath for extra strength. The deep shell design offers optimal skull coverage, dropping low at the temples and across the back of the head.  POC keeps their strap system simple, with Y-shaped adjusters that spread the straps widely around your ears and a buckle closure at the chin. 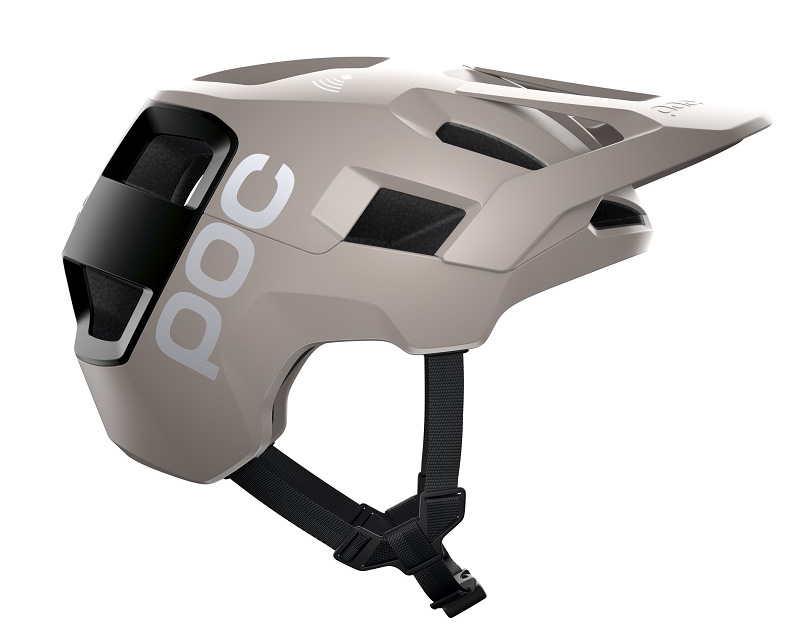 The Kortal Race MIPS features POC’s patented break-away visor to help reduce neck injury in a crash.  The visor provides four positions, and leaves ample room for goggles when fully lifted up. On that note, this helmet was designed to fit seamlessly with POC’s Ora goggles (or those Devour sunglasses). 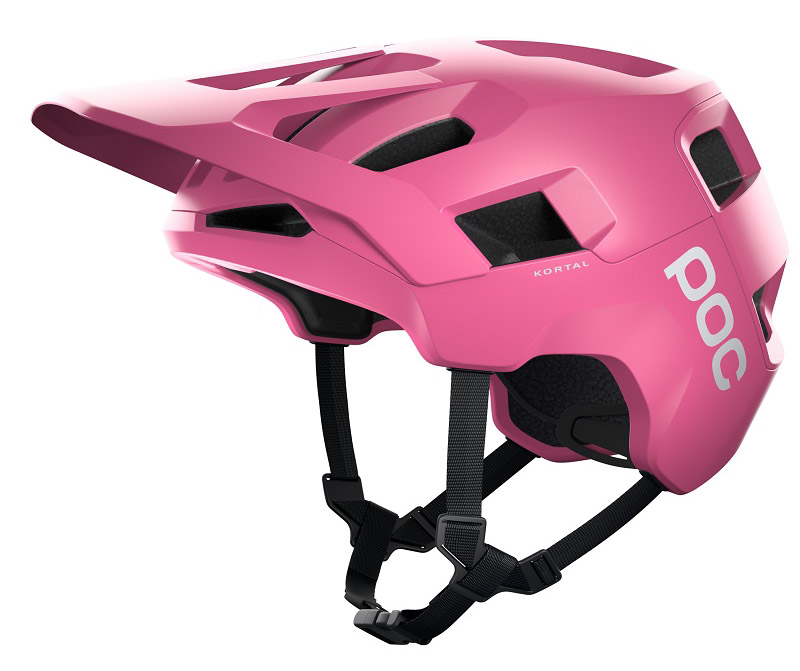 The Kortal helmet bears the same overall design as the Race MIPS version, but does not build in the Multi-directional Impact Protection System, RECCO reflector, or NFC Medical ID chip. The base Kortal does retain POC’s breakaway visor, and is also certified for eMTB use. 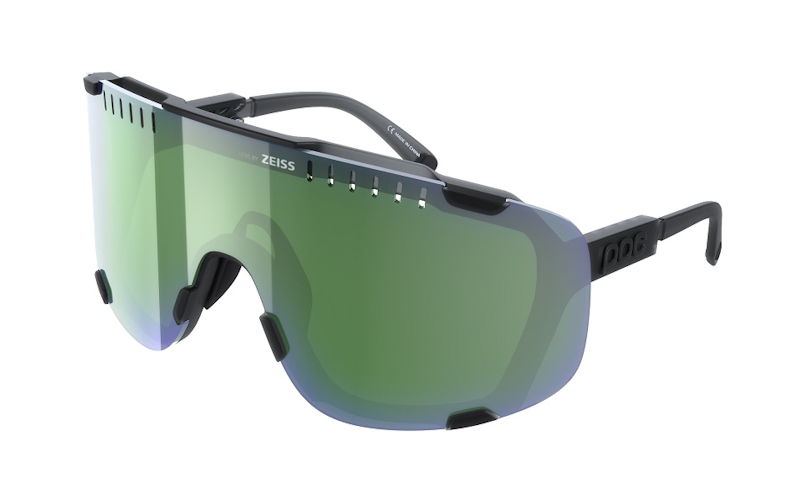 Designed to be an almost-goggle, the Devour Clarity sunglasses boast huge lenses to offer maximum eye protection and an undisturbed field-of-view. Even their lean frames were designed to not interrupt your peripheral vision.

Not limited to one style of riding, the Devour sunglasses feature POC’s Clarity lenses, color-tuned to enhance definition on either road or trail. The lenses also provide complete UV400 protection, come with an anti-scratch coating, and are coated with Ri-Pel to fend off dirt, oil, sweat, salt, dust & water. 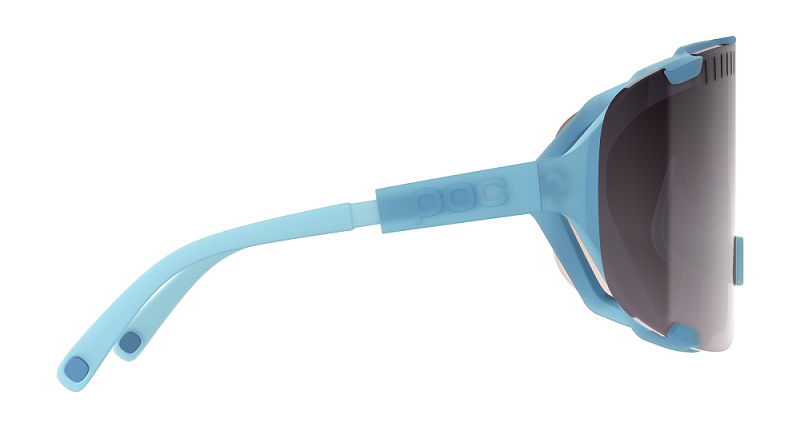 One clever feature of the Devours is their adjustability. The length and grip of the Devour’s temples can be adjusted, as can their soft, grippy rubber nose piece. This should allow a wide range of riders to achieve a comfortable, secure fit. 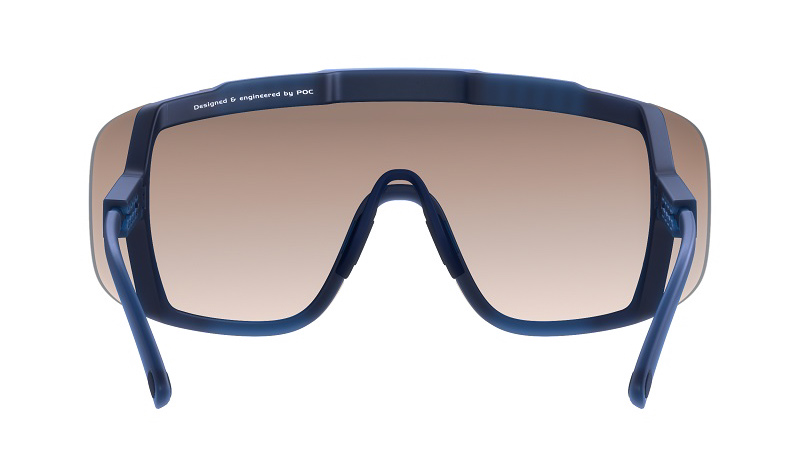 The Devour Clarity’s frames encourage airflow to keep fogging at bay, and the lenses are easily interchangeable.  The Devours come in seven frame colors with either a Brown Mirror or Grey Deep Green Mirror lens. Each pair includes an extra clear lens and a soft pouch/lens cloth. Their retail price is $250 / 250€… yes, the same price as the top-tier Kortal Race MIPS helmet

The Kortal Race MIPS, Kortal, and Devour Clarity sunglasses are all now available online and in stores.

RECCO for mtb? Seems a bit overkill and silly considering it’s avalanche technology not long distance emissions but whatever gotta sell new helmets I guess plenty of suckers out there

Unless I misunderstand the tech, it can also be used to find someone in dense canopy cover, lost in the woods, no?

RECCO have extremely limited range they are passive reflectors and can be easily blocked by canopy and snow even inclement weather as well as directionality. Transponders must aimed directly at them to work at minimum . Don’t believe the hype. If you’re that worried tell someone where you’re going and leave your cell phone on it’s way more effective as a beacon . I think Poc really rides the “safety” angle to sell standard products hard.

Unfortunately the peripheral vision on the Devour isn’t good as stated. I was able to test a pair last month and would not recommend for the road for poor over the shoulder vision (looking back for cars, other riders in your group, merging etc…) and the all important low (head down) riding position had extreme vision restriction due to the very thick brow frame. I would however highly recommend them for MTB as they do shield a large area of the face. Note: if you have a narrow or small face the esthetic may not be for you as these are literally HUGE especially in width.