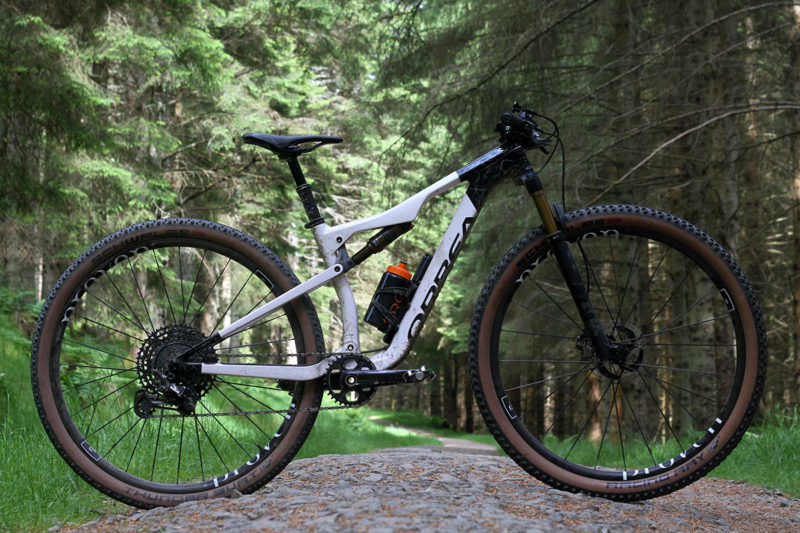 We recently caught up with Orbea Factory Racing’s World Cup XCO athlete, Isla Short. The young Scottish athlete put in a belter of a performance at the 2020 World Championships in Leogang, placing 5th in some seriously muddy conditions that she is all too familiar with. 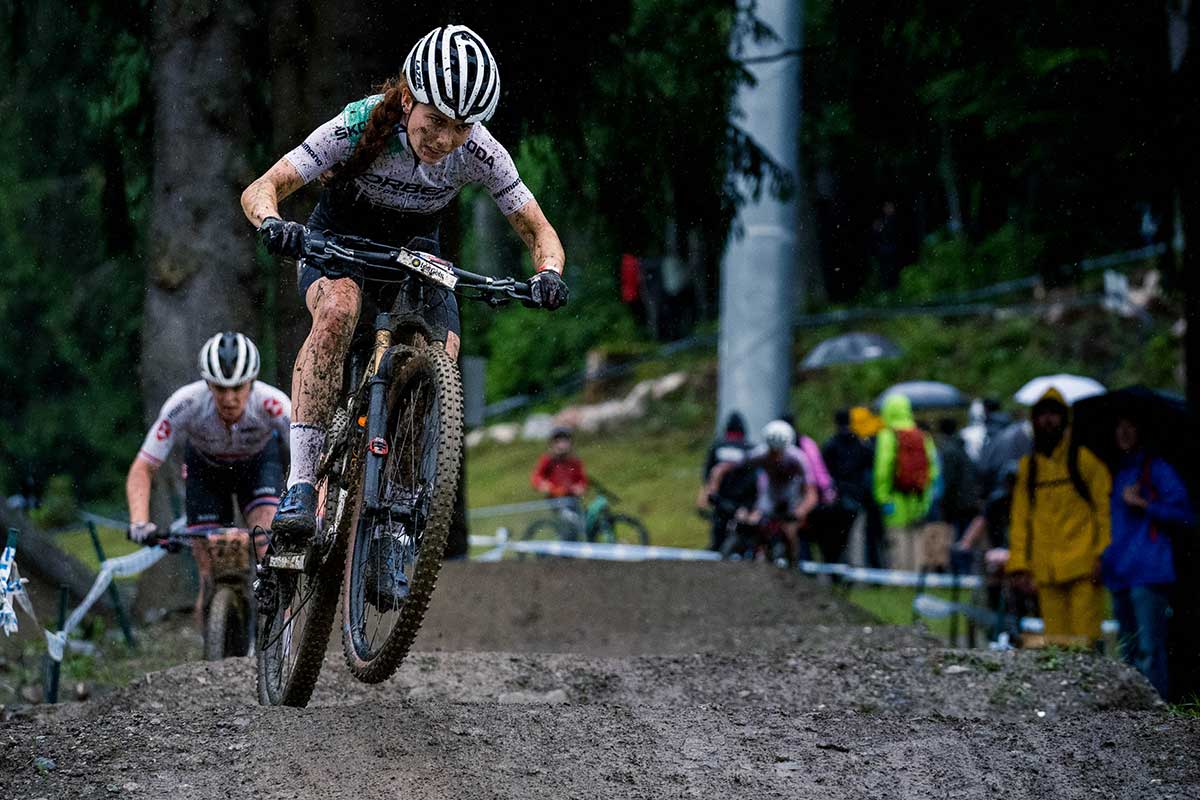 Isla Short charging hard through the mud fest at Les Gets World Cup XCO where she place 11th and posted a top 5 lap time. Photo by Keno Derleyn.

Isla is looking to build on that this year, battling it out on the World Cup circuit with a full factory setup for the first time. We’ve the details on her Orbea Oiz XC Race Bike, including a glimpse of some very special prototype Hunt Proven wheels with carbon bladed spokes… 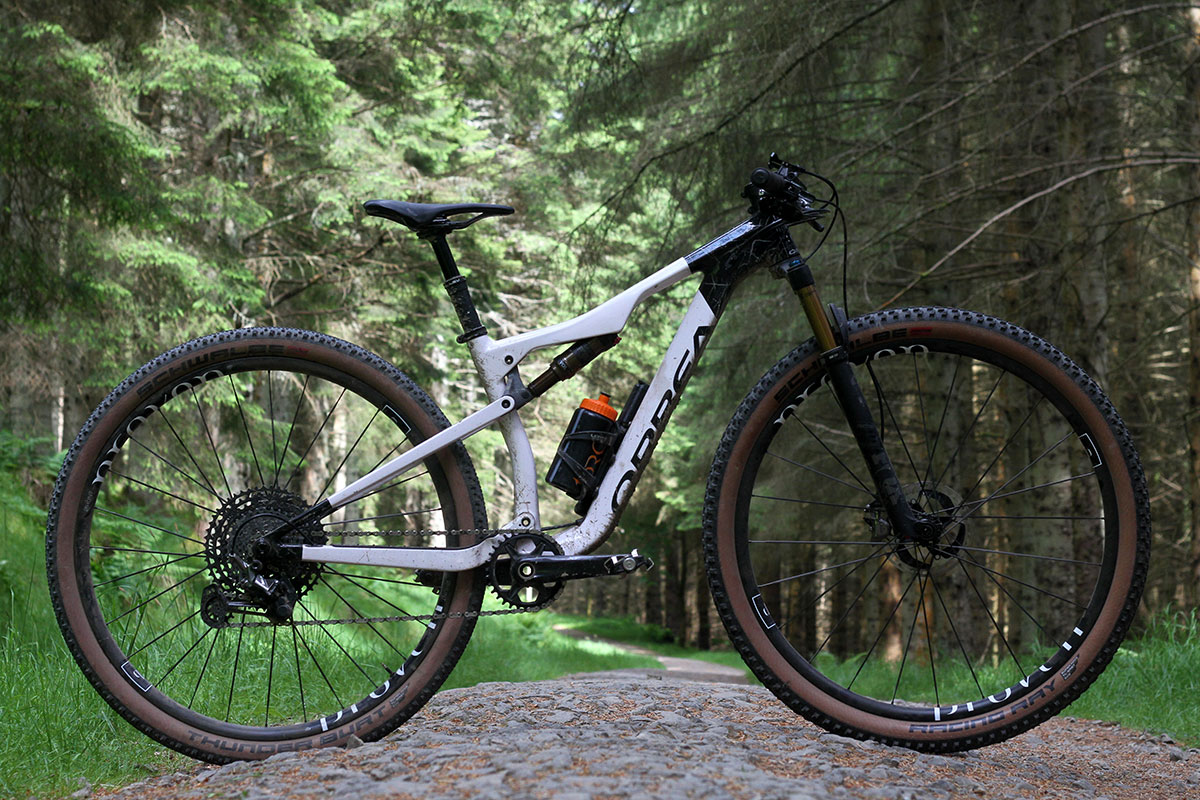 A few days after wiping the floor with the field at the Glentress 7 Hour Endurance Race, we caught up with Isla Short and her Orbea Oiz to find out exactly how she sets it up, home and away. Before we dive into the details, here are some important facts for context: Isla stands at 153cm tall and weighs 48kg. She rides the small 2021 Orbea Oiz, with the new lightweight OMX Carbon construction seen on Orbea’s top-end road racing bikes. 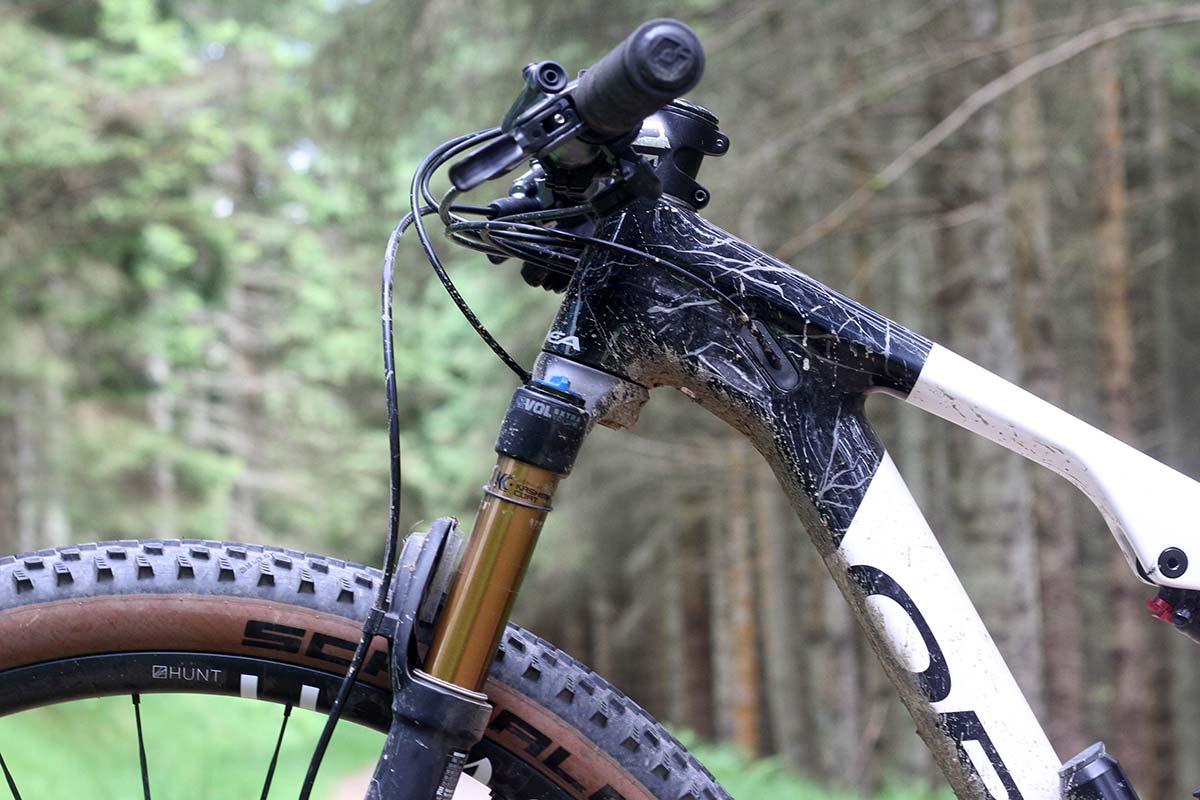 Isla runs a 100mm travel FOX 32 Step Cast Fork running between 60 and 70 PSI, depending on course conditions, with rebound set at 12 clicks from fastest

The Orbea Oiz is available as a 100mm travel pure-bred XC race bike, and as a more trail-oriented 120mm travel bike. One would assume Isla rides the former, but one would be mistaken! Her Oiz is something of a hybrid between the XC and TR versions, running a 100mm travel fork and a 120mm travel rear end. It’s the same frame, though; the Fox i-line DPS Factory shock has simply been modified to run a longer stroke length. 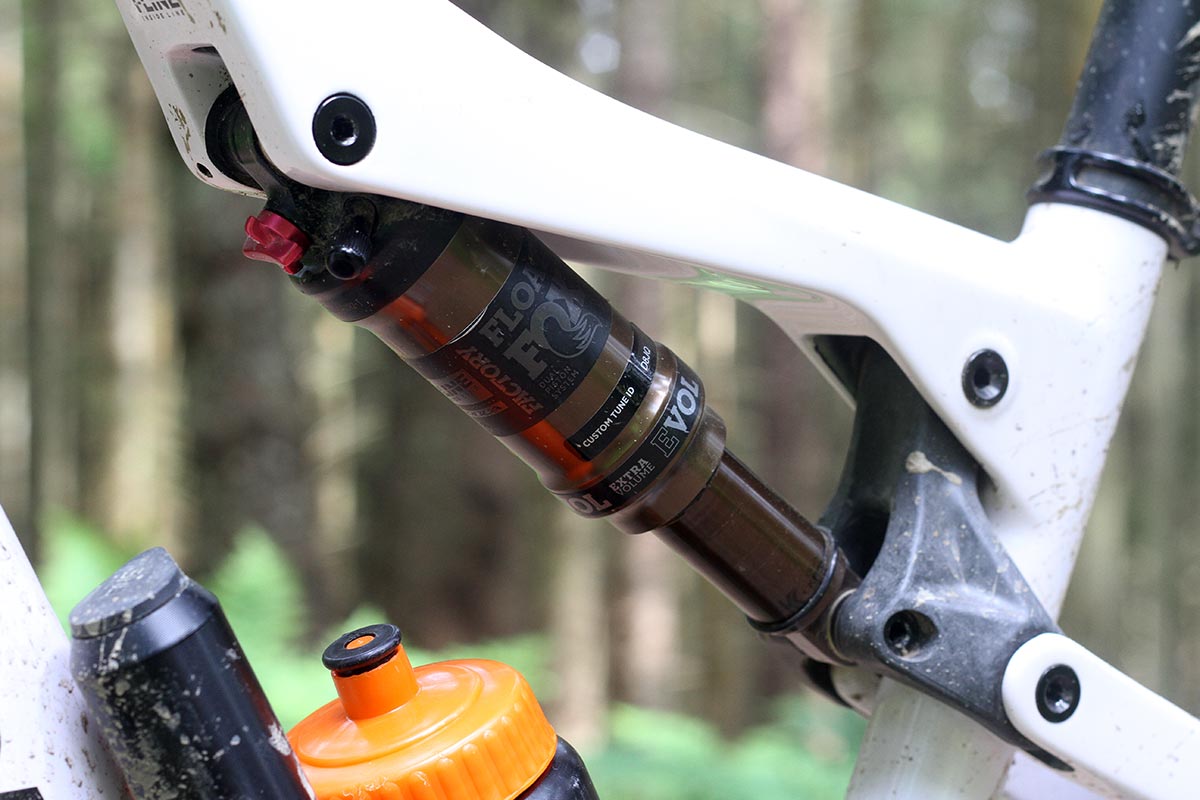 Isla puts 100-110 PSI in the shock, depending on the course and conditions; rebound is set to 9 clicks from fastest

Why the hybrid? At 5′ 0″, Isla is already at the limit of frame size. To suit her riding style, she prefers to keep the front end low with the smaller axle-to-crown height of the 100mm fork, but she still wants the increased comfort and support on the descents that 120mm travel provides.

Unlike the stock Oiz, the remote for the dropper post is not integrated into the suspension remote; Isla runs a separate KS dropper lever on the left hand side of the bar

The Orbea Oiz has three different riding modes with the suspension hooked up to a 3-Position Squid Lock remote on the bar. It’s a pretty neat setup with the remote lockout for the shock completely hidden away where the shock is mounted into the underside of the top tube. It took Orbea 3 years to secure the patent for I-Line; you can read more about it here. 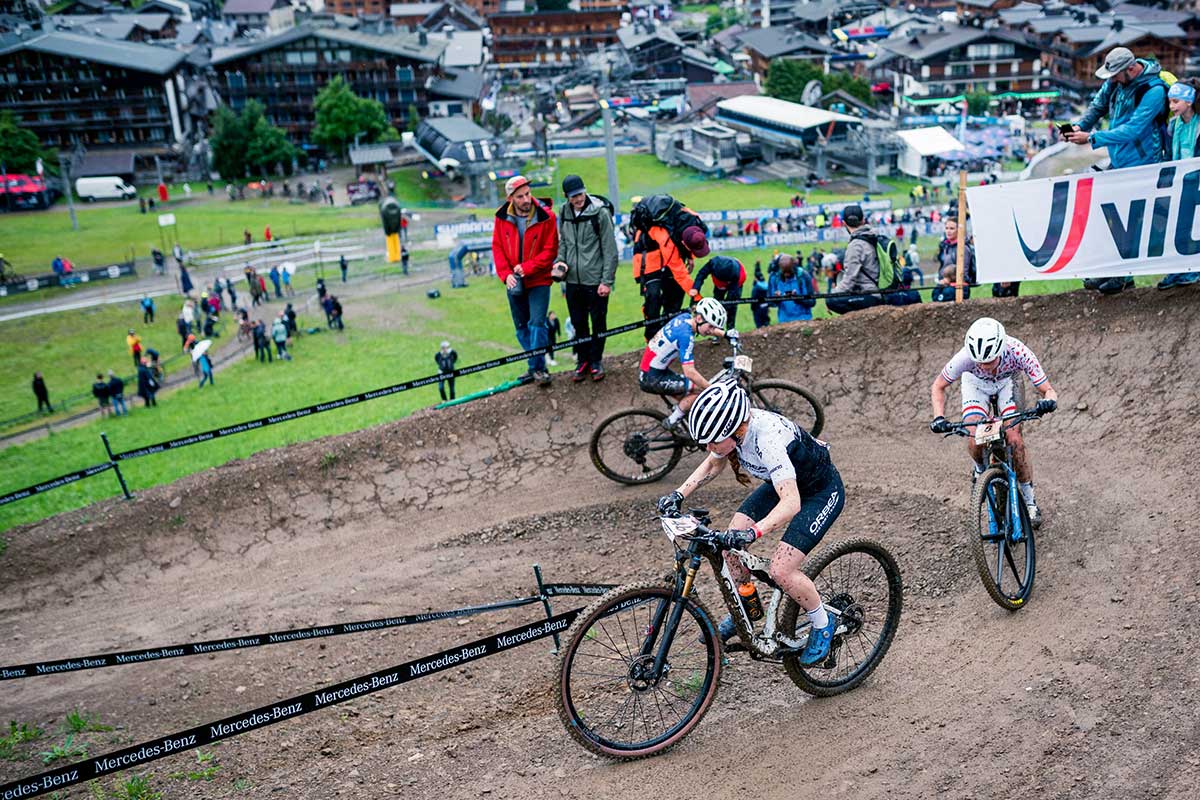 Three modes of suspension settings is a lot to think about, right? Isla said she actually switches between modes around 20 times per lap of an XCO course! For switchback climbs with steep corners (that often require an out-of-saddle effort), Isla puts the bike into its firmest setting with the fork and shock effectively locked out. 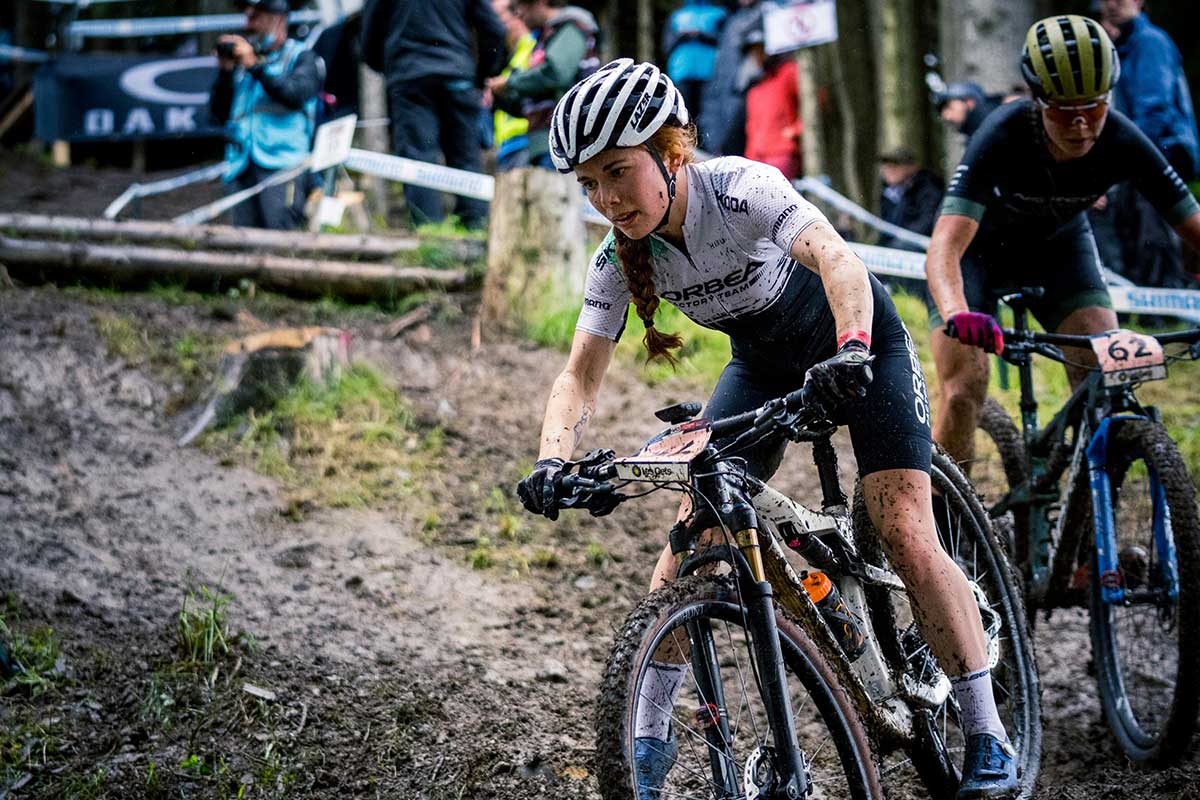 For descending and more undulating technical terrain, Isla opts for the middle setting in which the shock is run in trail mode (damping not fully open) and the fork in open mode with compression damping fully open. She runs the suspension fully open for bigger features and longer, more sustained, steeper descents. 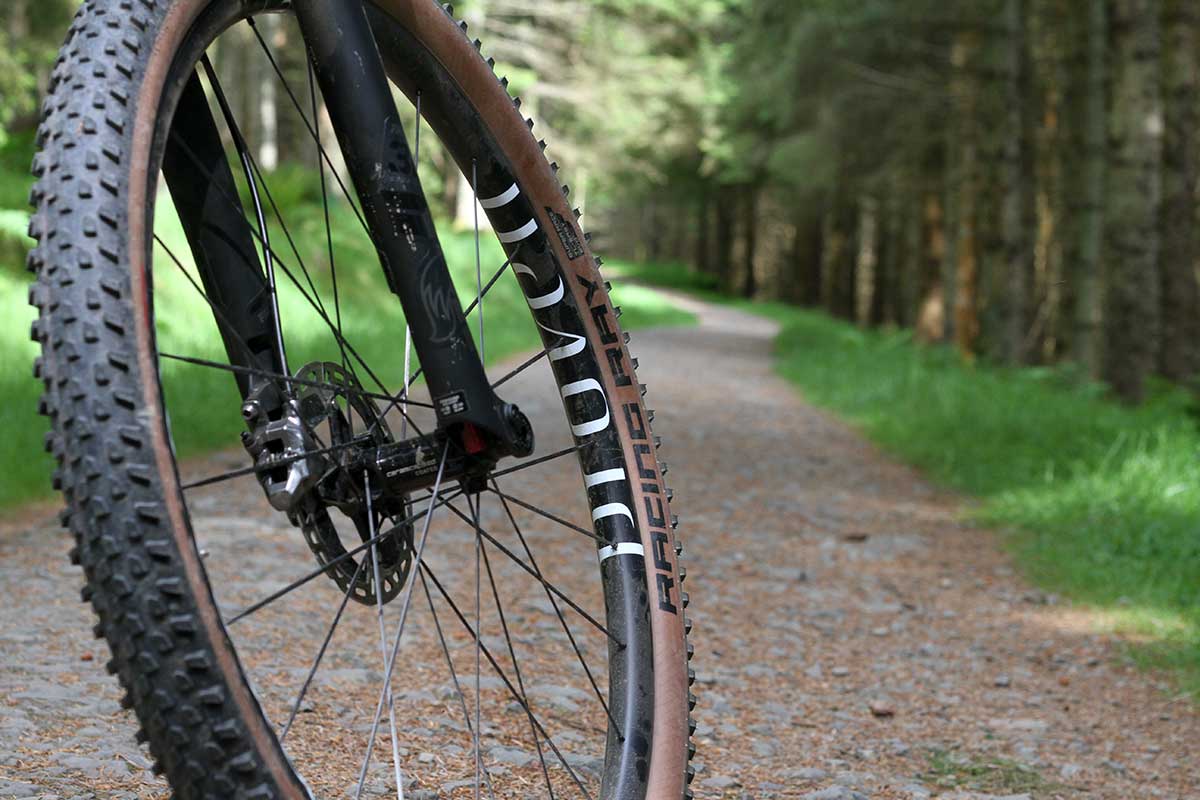 Isla runs 16 PSI in the front tire and 17 PSI in the rear on Schwalbe’s Transparent-Skin Walls tires; she rarely punctures

The Orbea Oiz is of course a 29″ XC Bike. Isla is supported by Hunt, and is currently testing an as-of-yet unreleased carbon wheelset with carbon bladed spokes. Isla was able to show us the decals, revealing the name of the prototype wheels, Proven. Why Proven? Because Isla proved their worth at the World Championships in Leogang with a career best of 5th place! 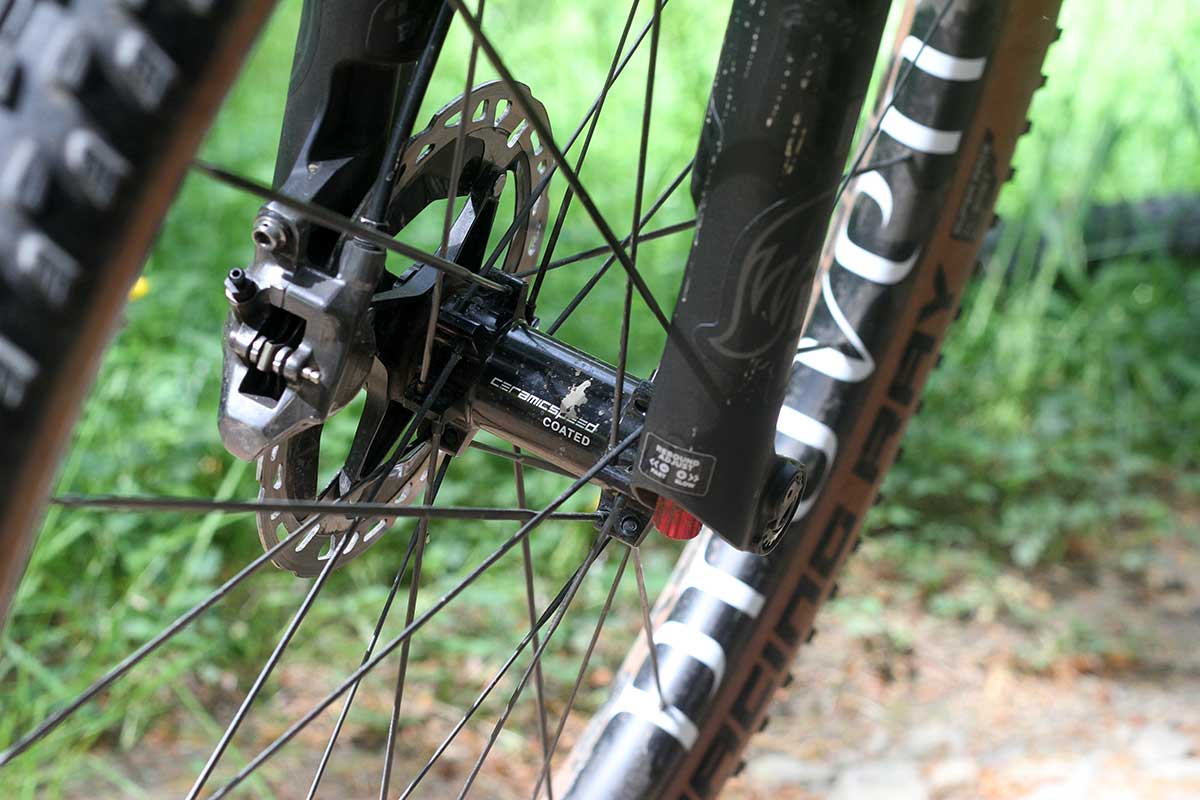 We don’t have all the details on these wheels just yet. We do know they run 24 straight-pull spokes in the front, 28 in the rear, laced to centre-lock hubs running Ceramic Speed bearings. The rims have a 26mm internal width. 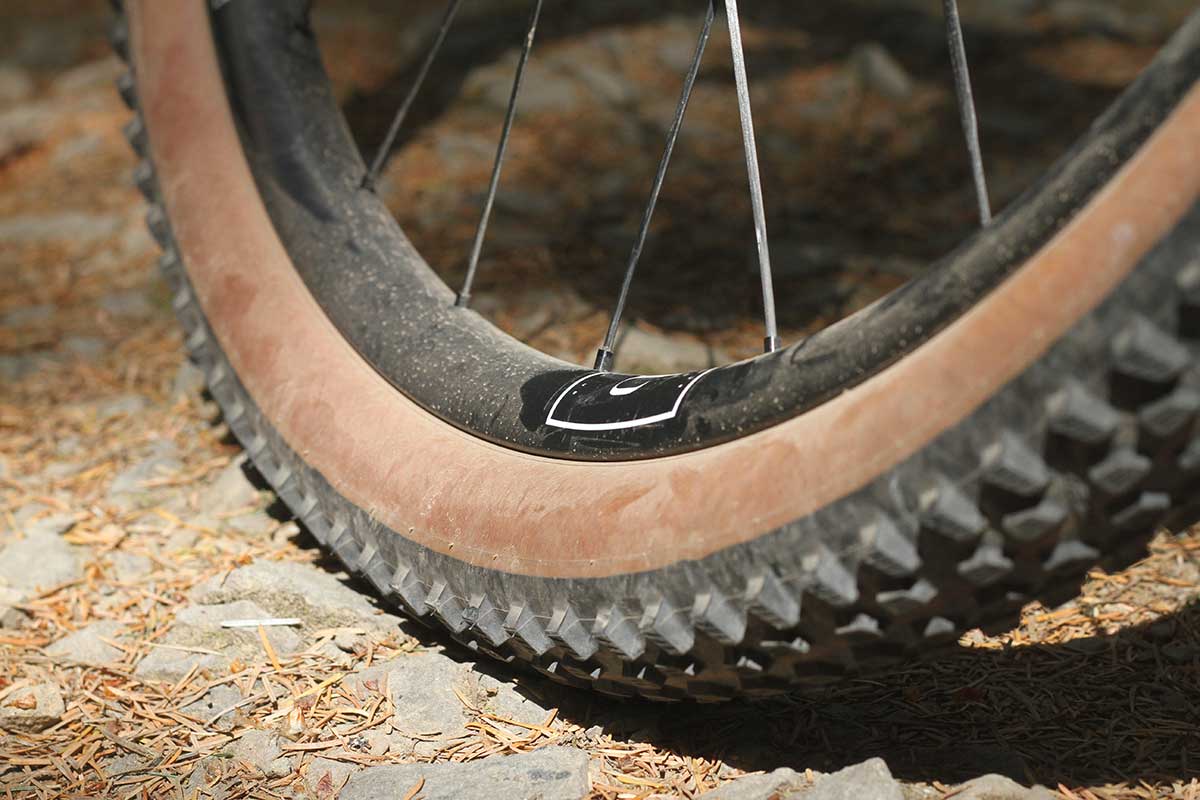 We’ve been quietly working on a new range of wheels with racers like Isla, each of them with an exciting new technical development for us. We’re still testing and won’t be signing them off till our athletes are happy. Keep an eye out on social as things develop! – Sam Meegan, Brand Manager at Hunt Mountain and Privateer Bikes. 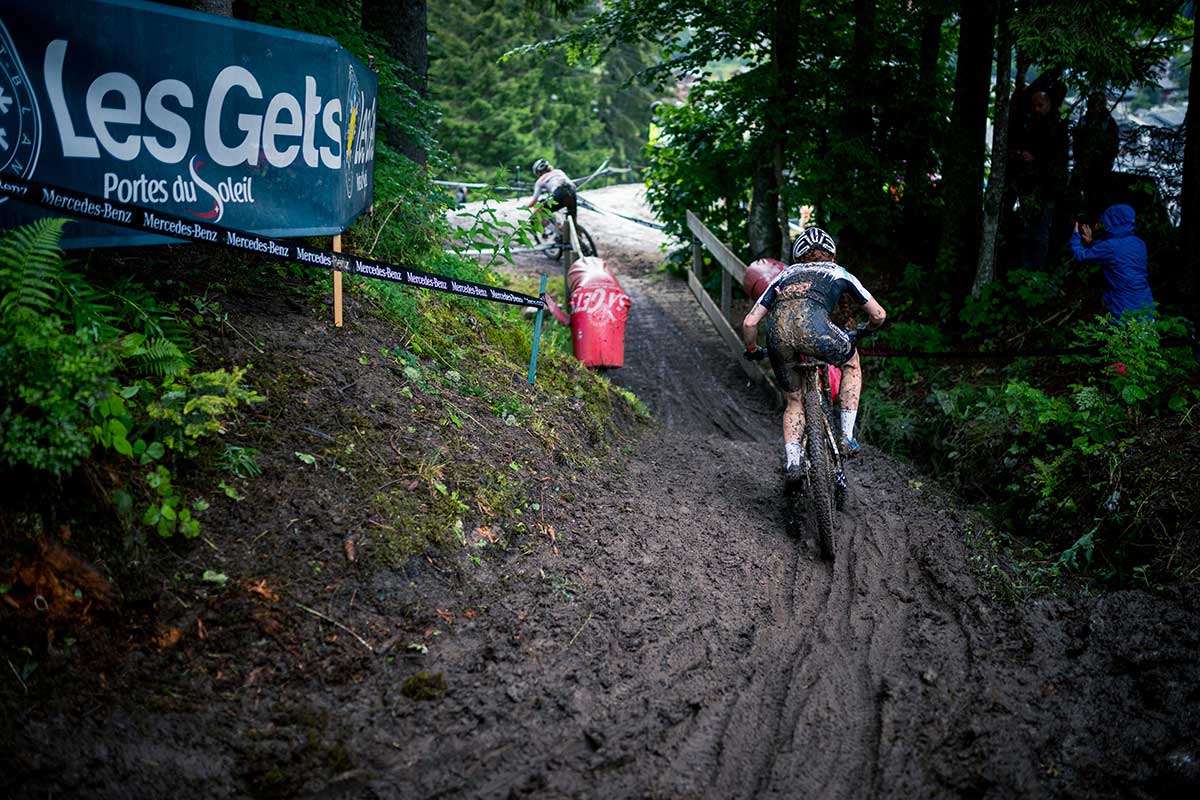 In the wet, Isla opts for something a little more CX. At Les Gets World Cup XCO, she was seen racing a 2.0″ Schwalbe Dirty Dan on the front wheel with the Addix Speed Grip compound. She said this really helped to cut through the deeper mud, preventing her from sliding out in corners. Only a 2.35″ Dirty Dan is available at the moment, so keep an eye out for this 2.0″ version; it’s on its way. 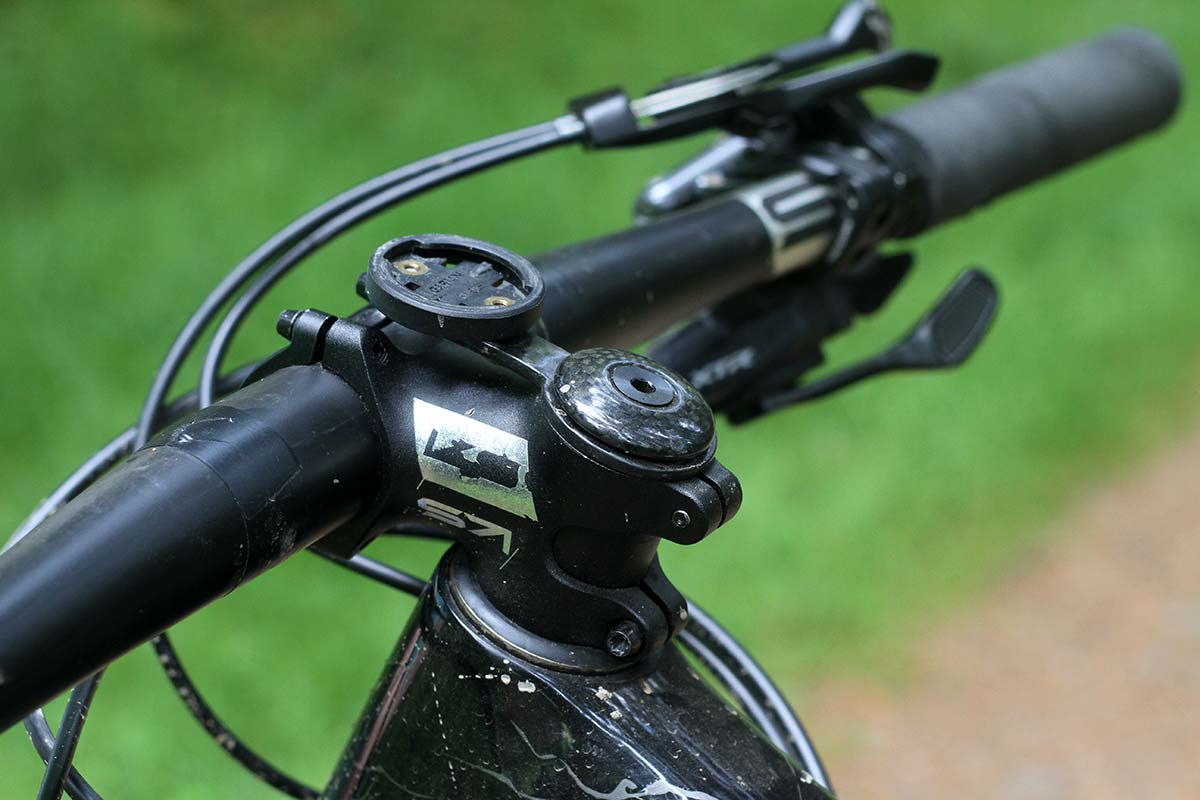 Isla has some interesting stuff going on in the cockpit of her Orbea Oiz. For one, she runs her handlebar upside down, converting its 10mm rise to a 10mm drop. Again, this is all done in an effort to keep the front end as low as possible to suit Isla’s riding style. The bar itself is another prototype for XC and all-mountain riding; a carbon KS SASO W700 with a 7.5° backsweep and a 5° upsweep. She cuts hers to 680mm. The stem is also from KS; it has a 50mm reach and a 17° drop. 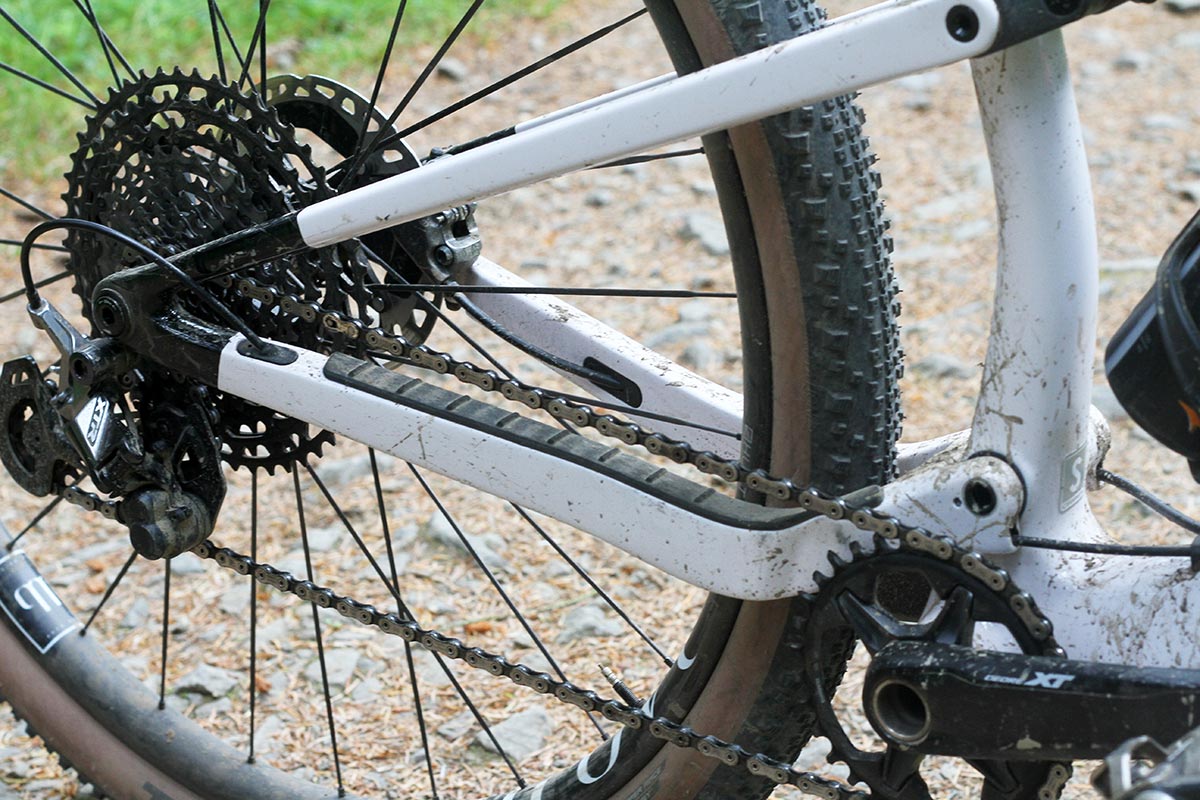 Isla Short is supported by Shimano. The Oiz is set up with afn XTR level groupset with a 32T chainring and a 10-51T cassette. You’ll notice her 165mm cranks are XT, though. Why? There were no XTR cranks available! Even the elite racers are suffering with the lack of component availability in 2021.

What about the contact points? Isla prefers to ride with Madison grips and a Selle Italia SLR Boost TM Super Flow saddle. For racing World Cups, she normally goes without a power meter, but at the latest World Cup XCO race in Les Gets she left her Garmin Rally XC200 Dual-Sensing Power Meter pedals on the bike. 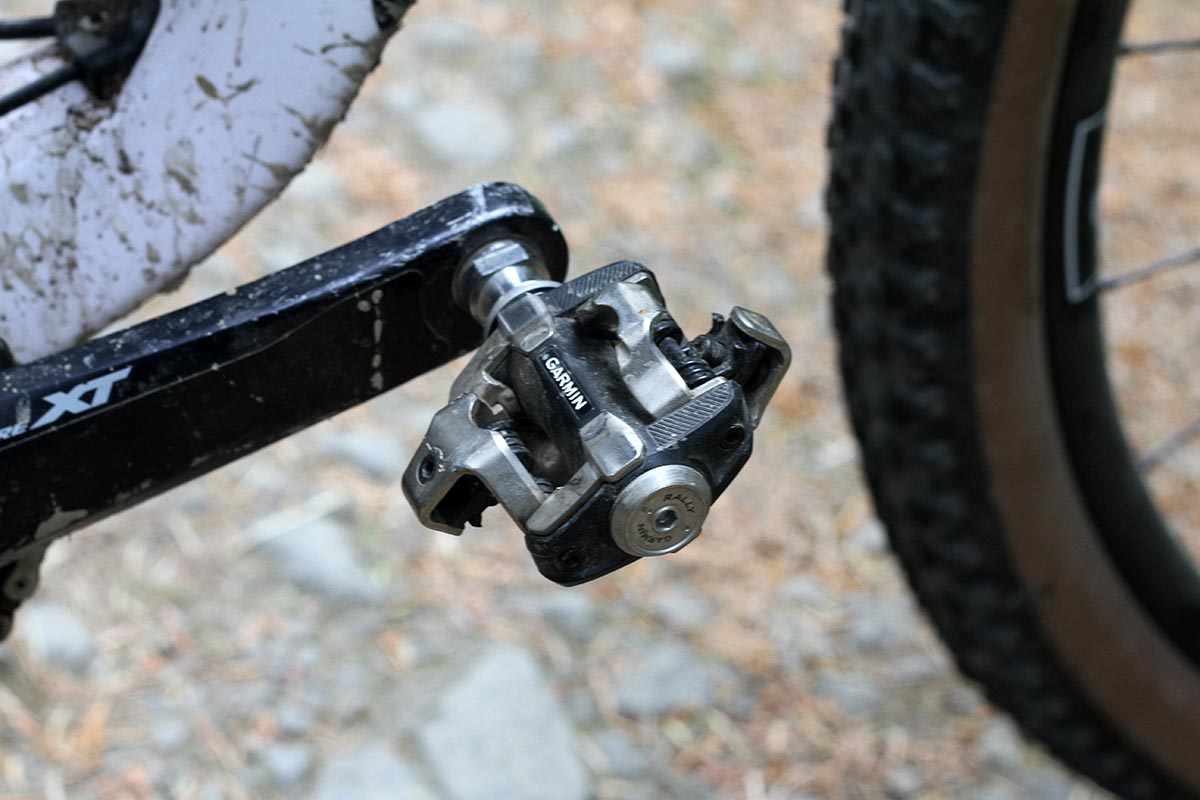 We wish Isla the very best for the next race in Lenzerheide, Switzerland! You can keep up with Isla on her Instagram page at isla_short. 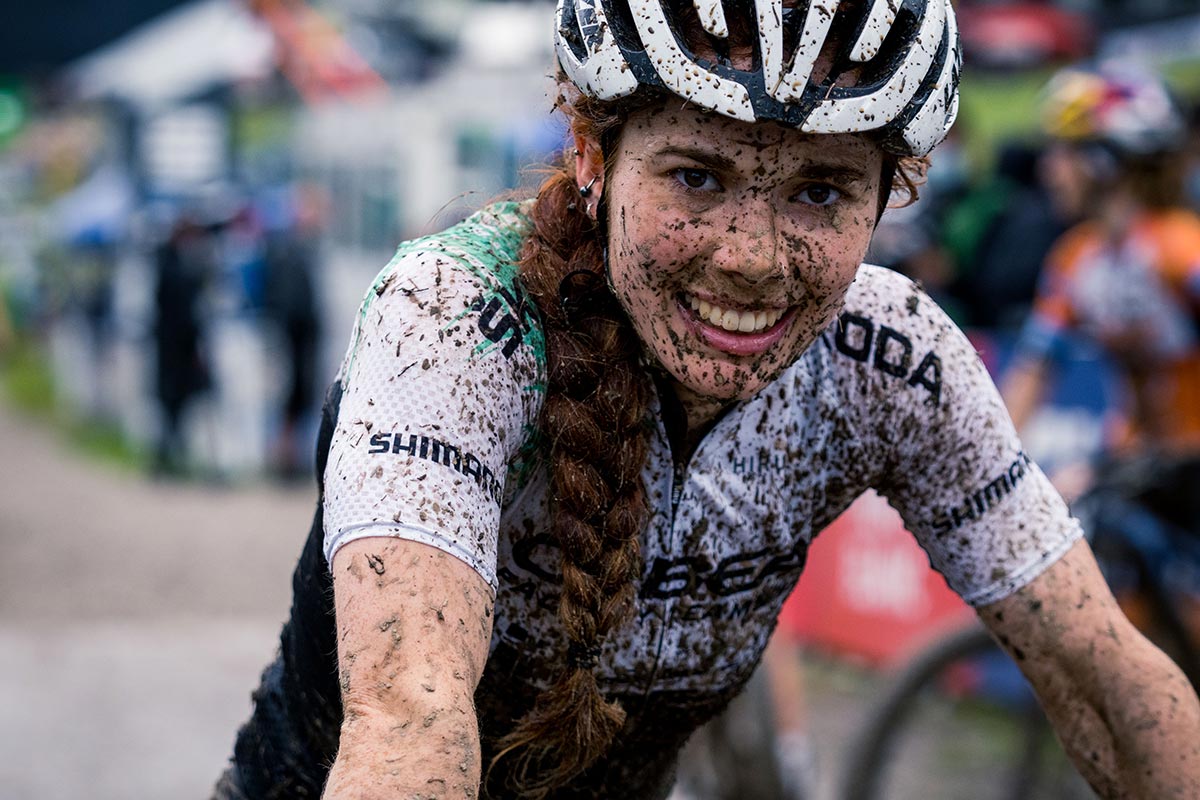 This is a really interesting article because of Isla’s small stature and low mass. If Isla ran 2.4″ tires they would probably be close to atmospheric pressure of 14.696 psi which means they would never go flat.

Isla is also the perfect candiate for carbon spokes because she isn’t going to put very stress into them.

The Orbea Oiz is a pretty popular because of its light weight but I am not a fan of drop link bikes you have to run excess shock pressure or lock it out to reduce pedal bob. I think swing link bikes such as the Specialized Epic, Canondale Scapel, Canyon Lux are going to become the dominant XC design because the link can be used to stiffen the suspension against pedal induced pedal bob in the inital part of suspension travel while being light weight and allowing for two full water bottles in the front triangle.

Isla shouldn’t have to adjust the firmness of the suspension 20 times a lap, that tells you need to find a different full suspension design.

A lot of the top end XC bikes are oil well based full suspension designs that only allow for one water bottle which is a serious problem when the temperature and the humidity climb and you need cooling fluid to prevent over heating. Older model Scott Sparks and Trek Top Fuels are good example of Oil well full suspension designs

Since Isla is so light she should be running a Extralite stem, HT Leopard M1 titanium pedals, a Ritchey WCS carbon seat post, XTR cranks with stages power meters.

And despite her weight she most likely has sponsors negating your equipment recommendatuons.