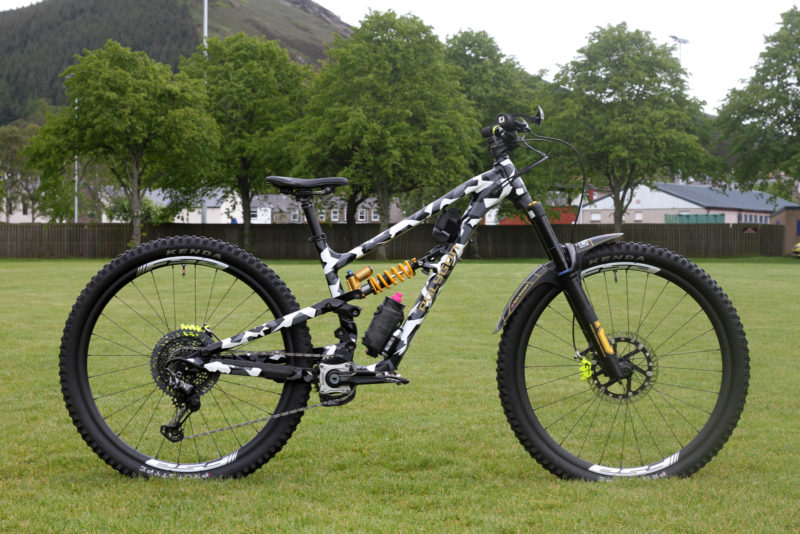 The recently announced Polygon Factory Racing team have arrived in the Tweed Valley, Scotland, ready to take on the opening round of the Enduro World Series aboard all-new 6-bar linkage enduro bikes. The prototype remains unnamed, but a departure from Siskiu is likely, given the new suspension platform closely resembles that seen on the Polygon Bromo eMTB. 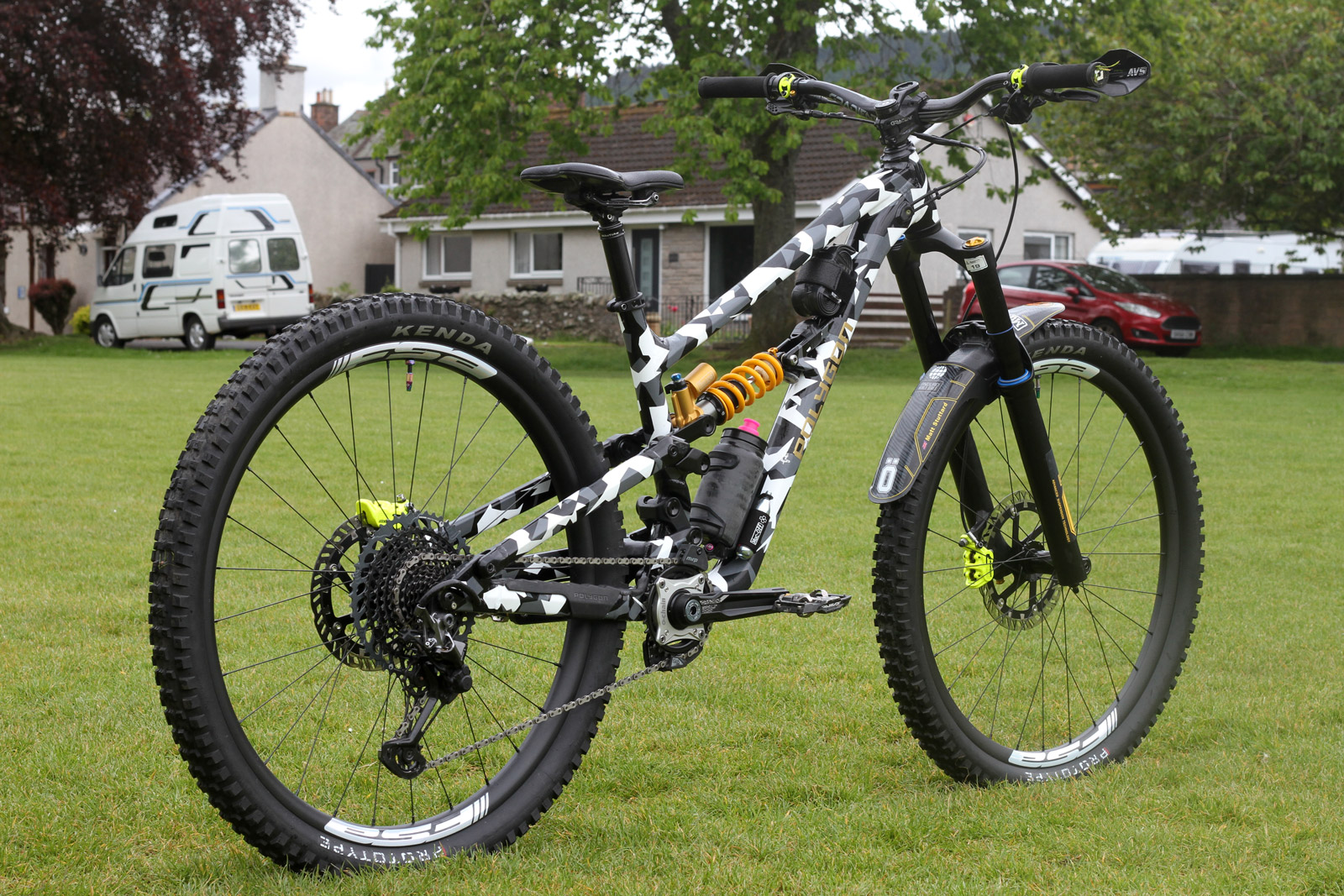 This is the second Polygon prototype Matt has ridden; he tells us the original was a little too slack and low to the ground. The one you see here is very close to what the production frame will look like.

Dan Wolfe, Brady Stone and Matt Stuttard will be putting it through its paces this weekend, the latter of whom is a strong contender for a Top 10 spot. We caught up with Matt to check out his new ride ahead of Shakedown. 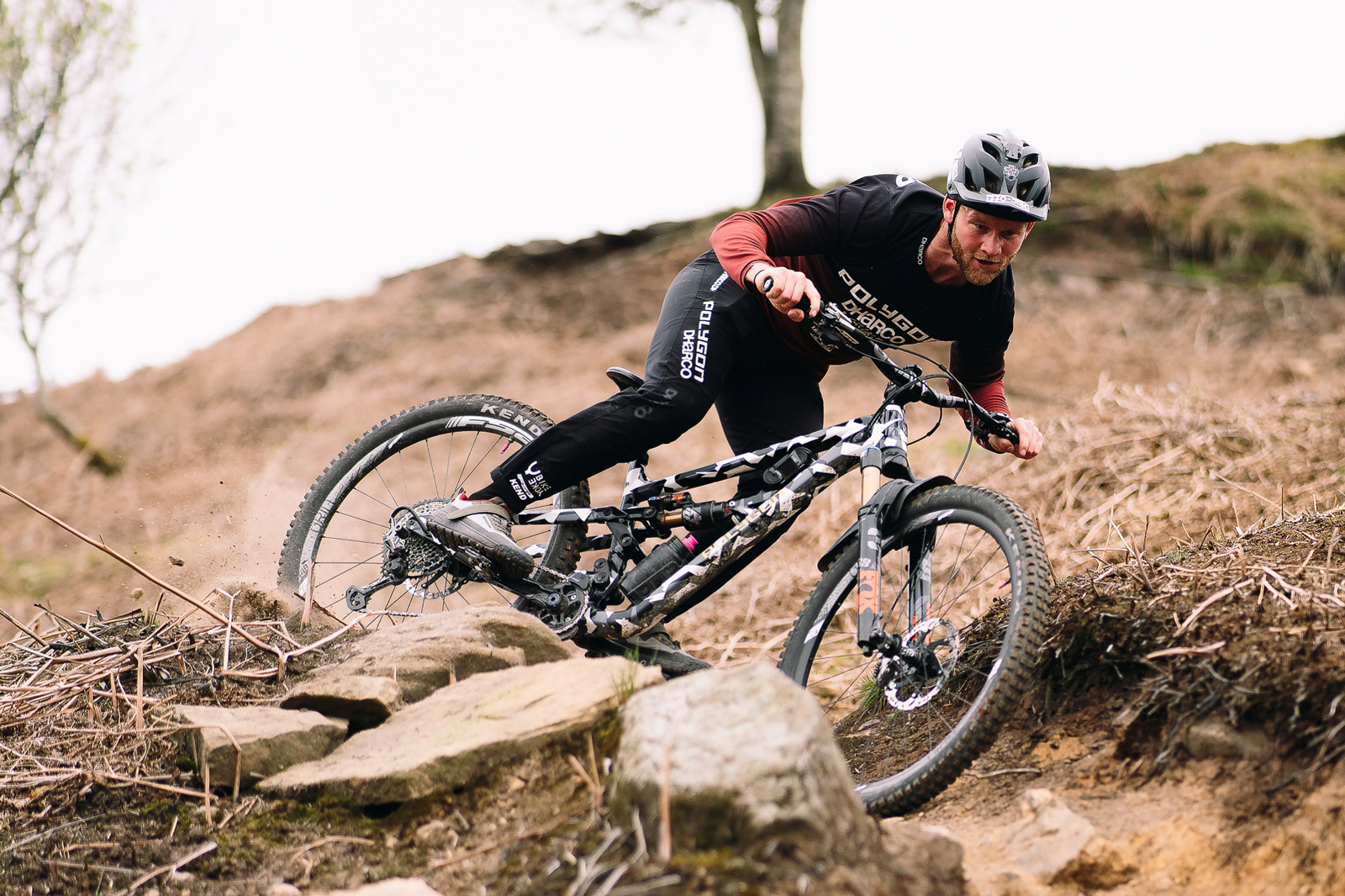 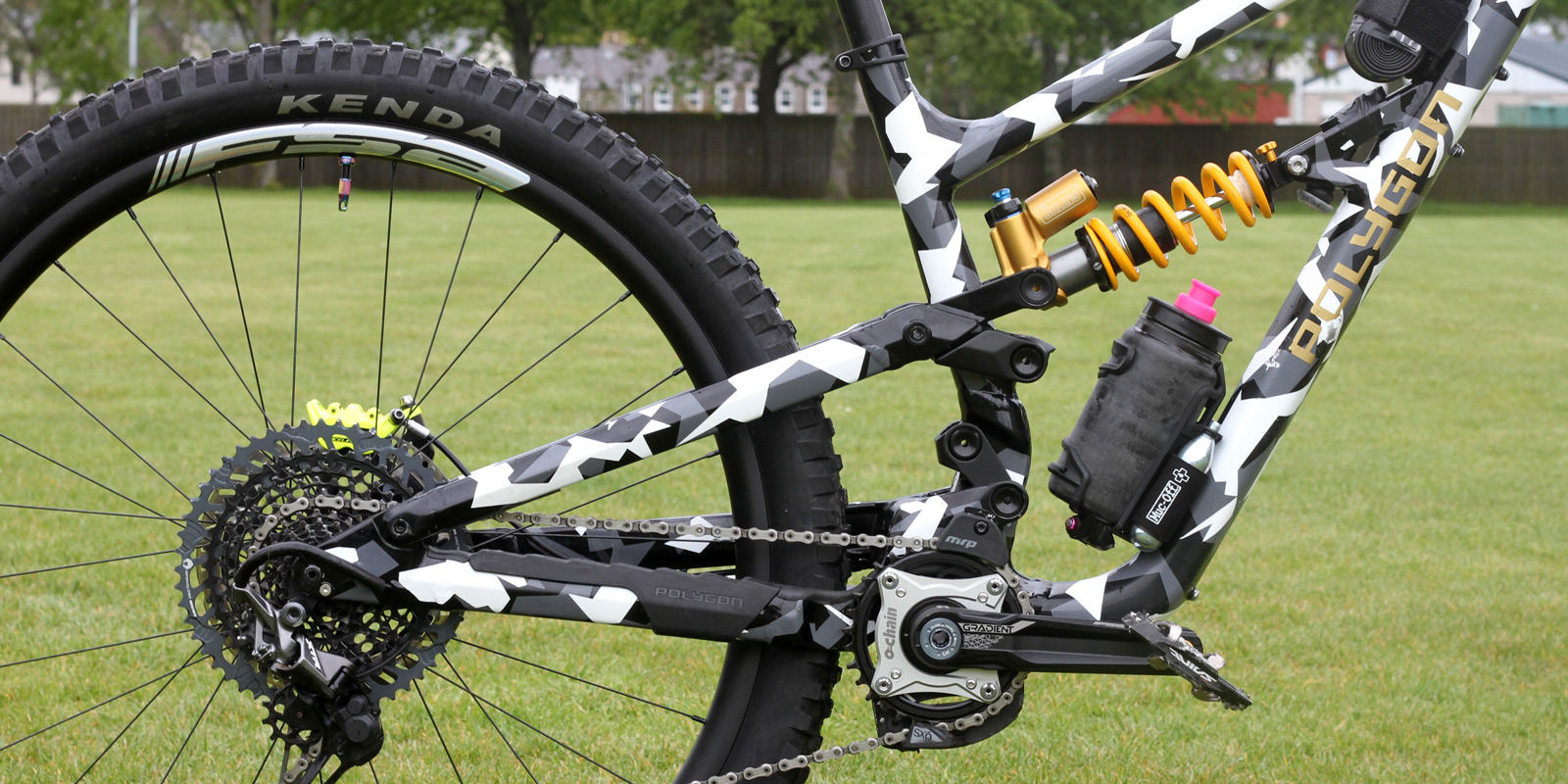 Polygon’s prototype enduro bike is a 29er, with 170mm of suspension travel in the front and rear, damped by a 205mm x 65mm Trunnion mount shock. For now, it is aluminum only. All of Polygon’s current full suspension mountain bikes run aluminum frames (only the Syncline hardtail is available in carbon), but that’s not to say it will stay that way. We are told a carbon version is not entirely out of the question.

The 6-Bar linkage is, undeniably, the highlight of the new bike. We count 16 bearings in total, housed over seven pivot locations, with an eighth pair housed at the lower shock mount. The video above from Matt’s Instagram does a good job of showing how the three links, each pivoting about the seat tube, articulate as the bike is pushed through its rear wheel travel. What you can’t see in that video is the seat stay pivot, positioned way back near the chainstay-mounted rear brake mount. 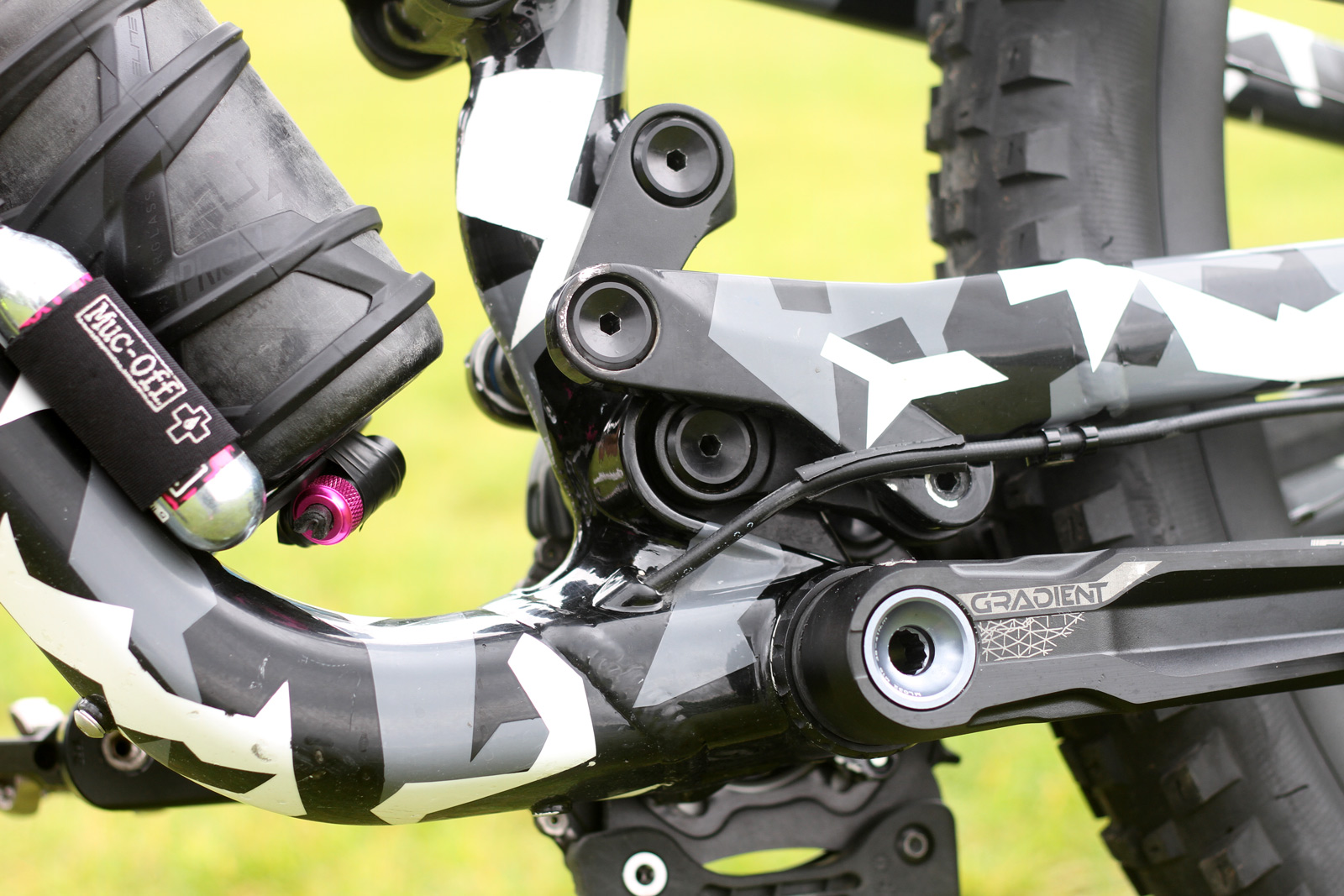 Only a close-up of the non-drive side reveals the true intricacy of this 6-bar linkage.

Determining the axle path are the two counter-rotating links positioned lowest on the seat tube, as these connect directly to the bike’s chainstays. North of that, the seatstay and the rocker link drive the Ohlins TTX 22M Coil shock. We haven’t yet received any kinematic information from Polygon, so details on leverage curve, anti-squat and anti-rise will have to wait until the official launch. 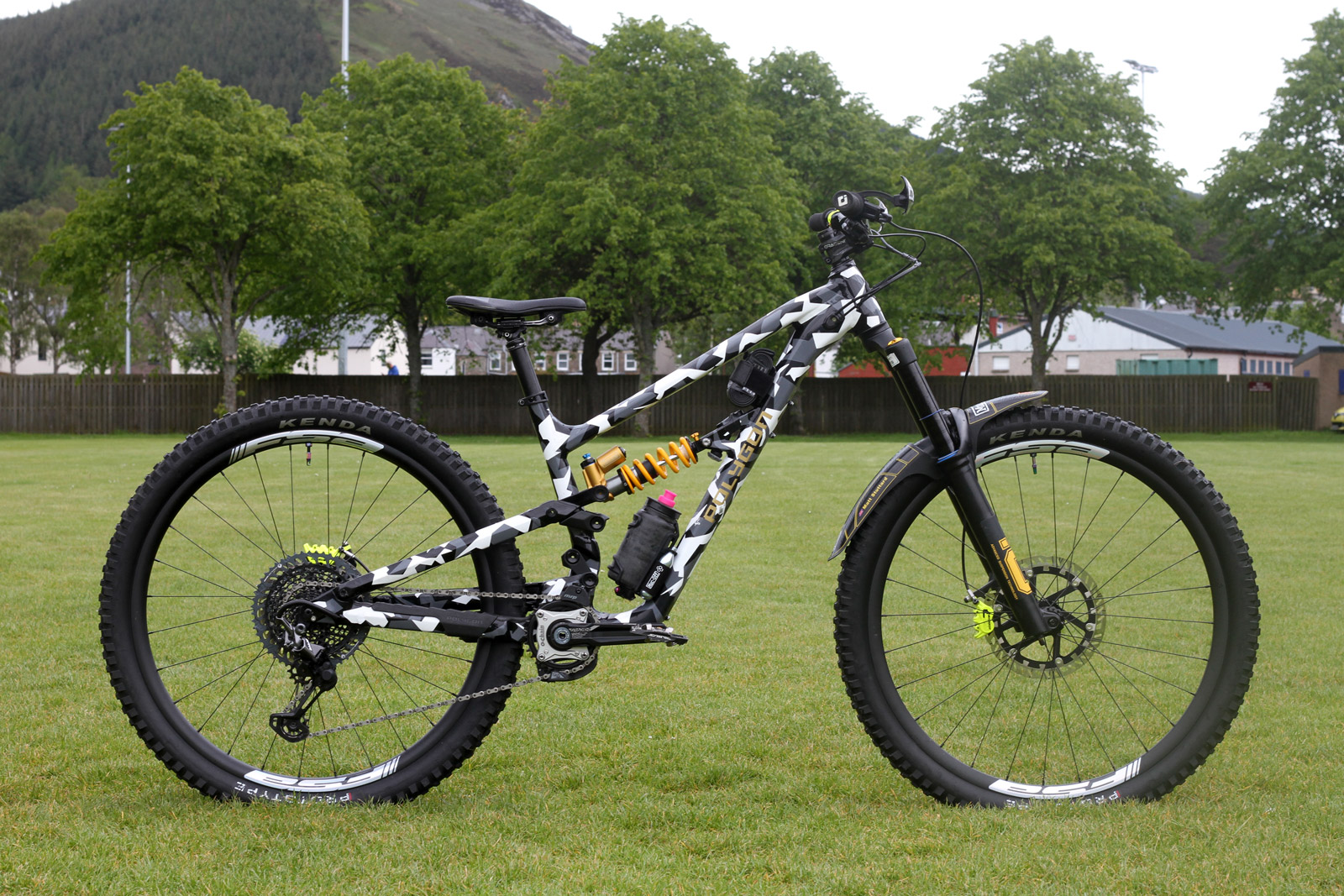 Matt Stuttard tells us he weighs 85kg and stands at 6’ft 2″ tall (188 cm). He rides the Large frame with a reach of 480mm or 485mm, adjustable by virtue of an aftermarket Works Components headset. 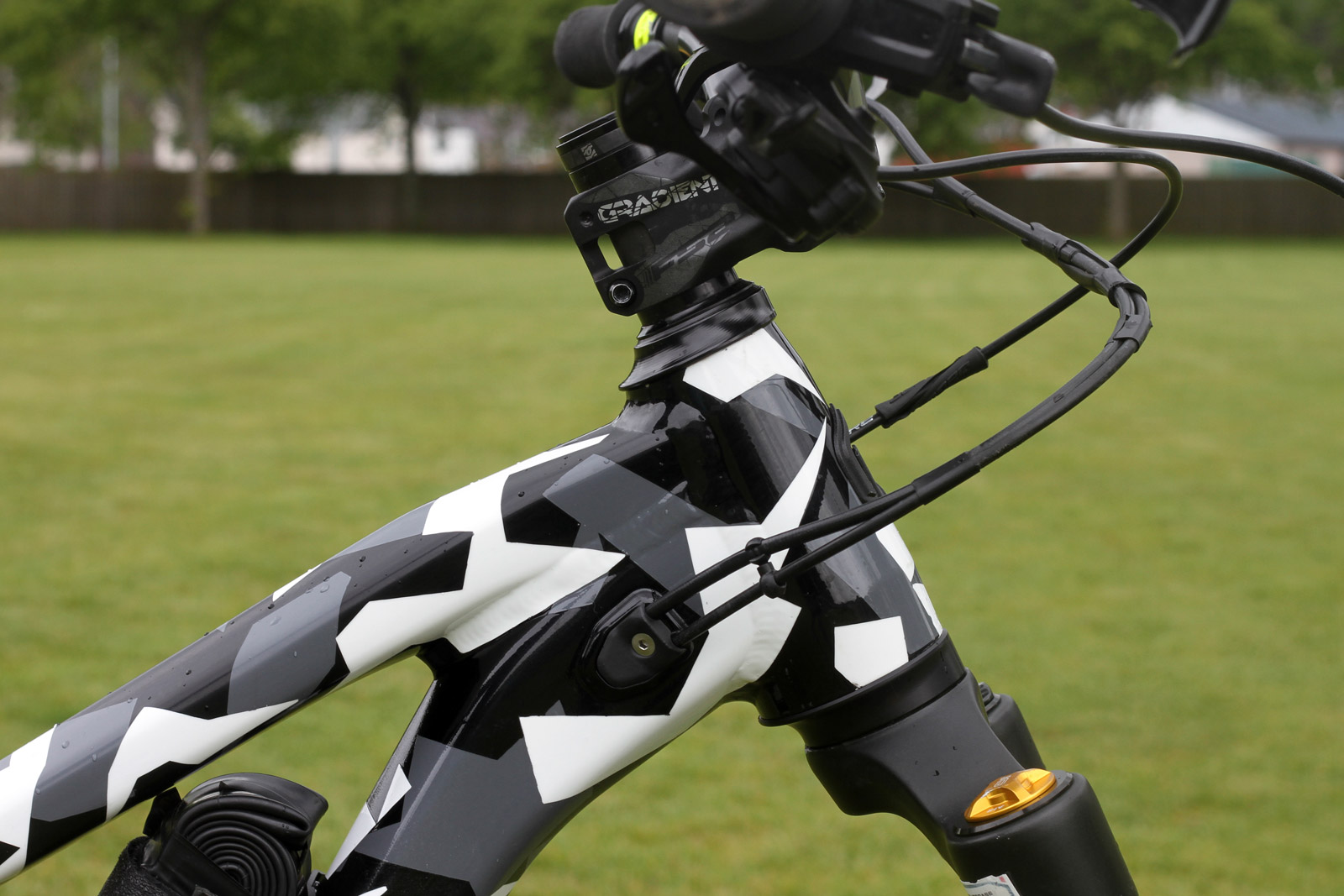 Matt tells us his Polygon has a head angle somewhere in the region of 64 to 64.5 degrees. The final production bike will see cable routing ports that allow the cables to exit lower, which should help prevent them getting in the way of any number board. 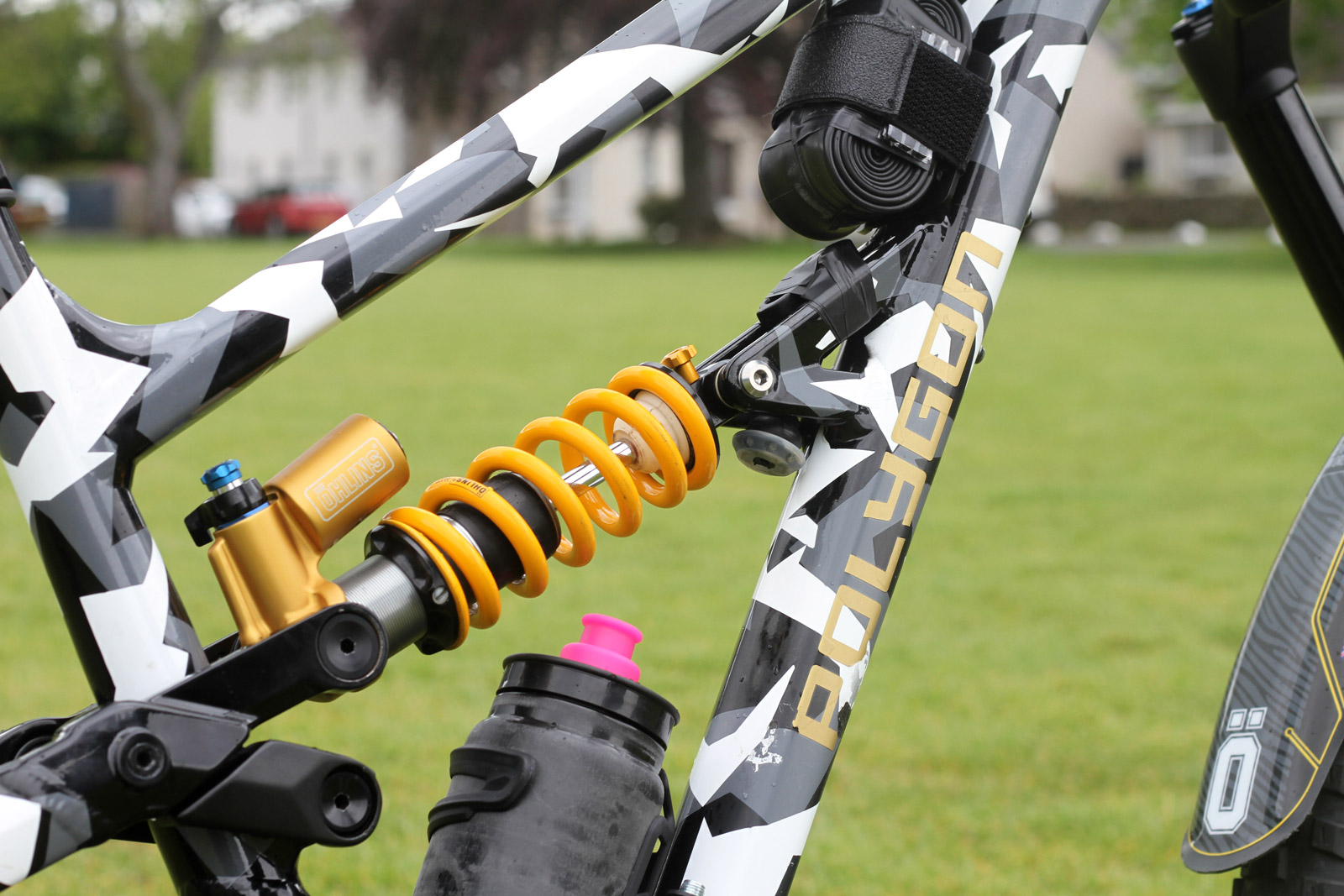 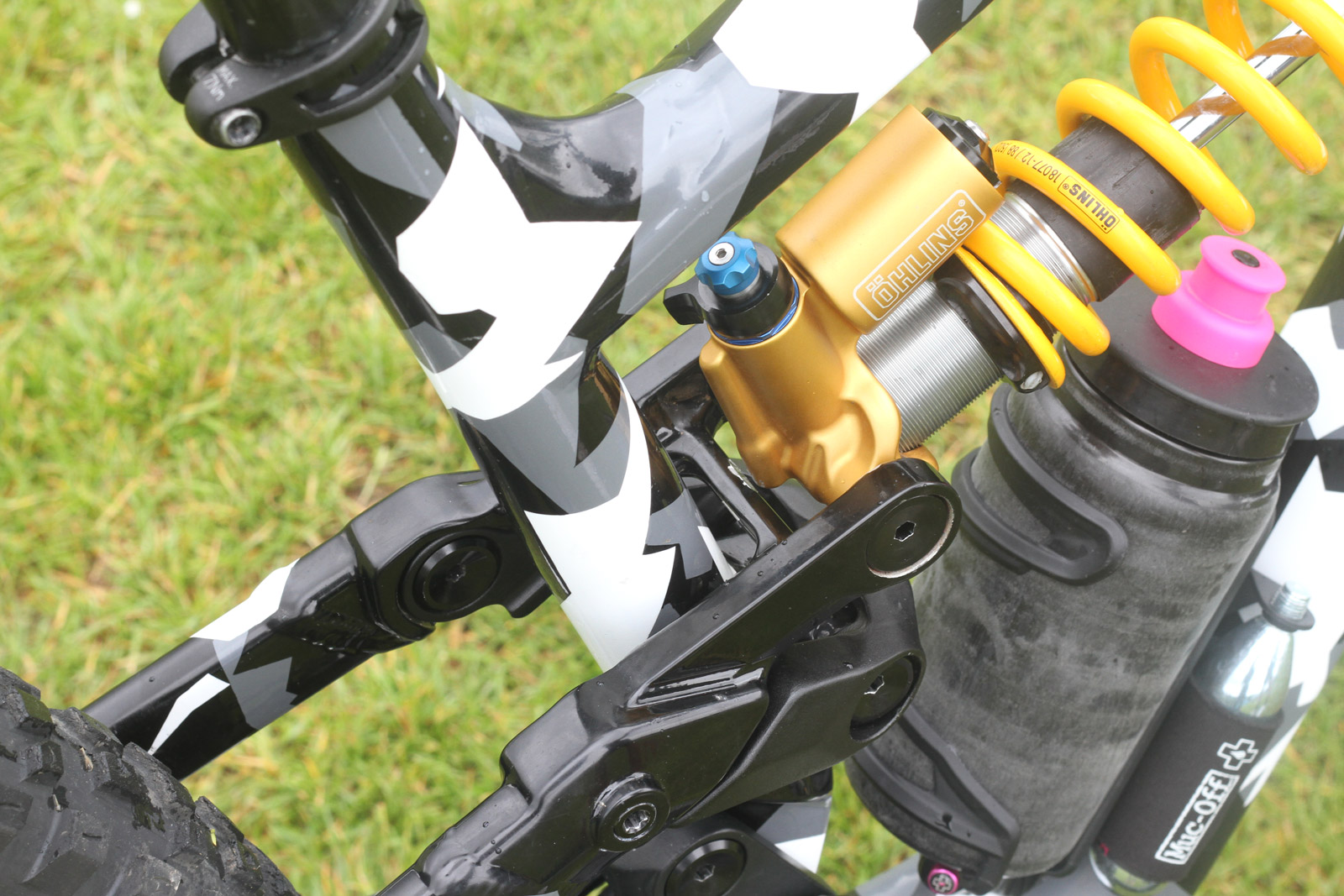 Though the Ohlins coil shock fits nicely, Matt has to file down the paint on the one-piece rocker link to get enough clearance for the Ohlins air shock; the team are currently testing a variety of shocks in order to find out just how much the shape of that upper link needs to be adapted for improved compatibility on the production bike.

Paired with that coil shock is Ohlins RXF38 Air M2 fork, delivering 170mm of front wheel travel. A standout feature of that fork is its two adjustable air chambers that allows riders to tune small bump sensitivity and end-progression ramp in isolation of one another. Matt sets up his with 265 PSI in the lower chamber that determines ramp, with 125 PSI in the upper, main chamber. Rebound damping and low speed compression are both set to 4 clicks from fully open, with the high speed compression adjuster set to fully open. 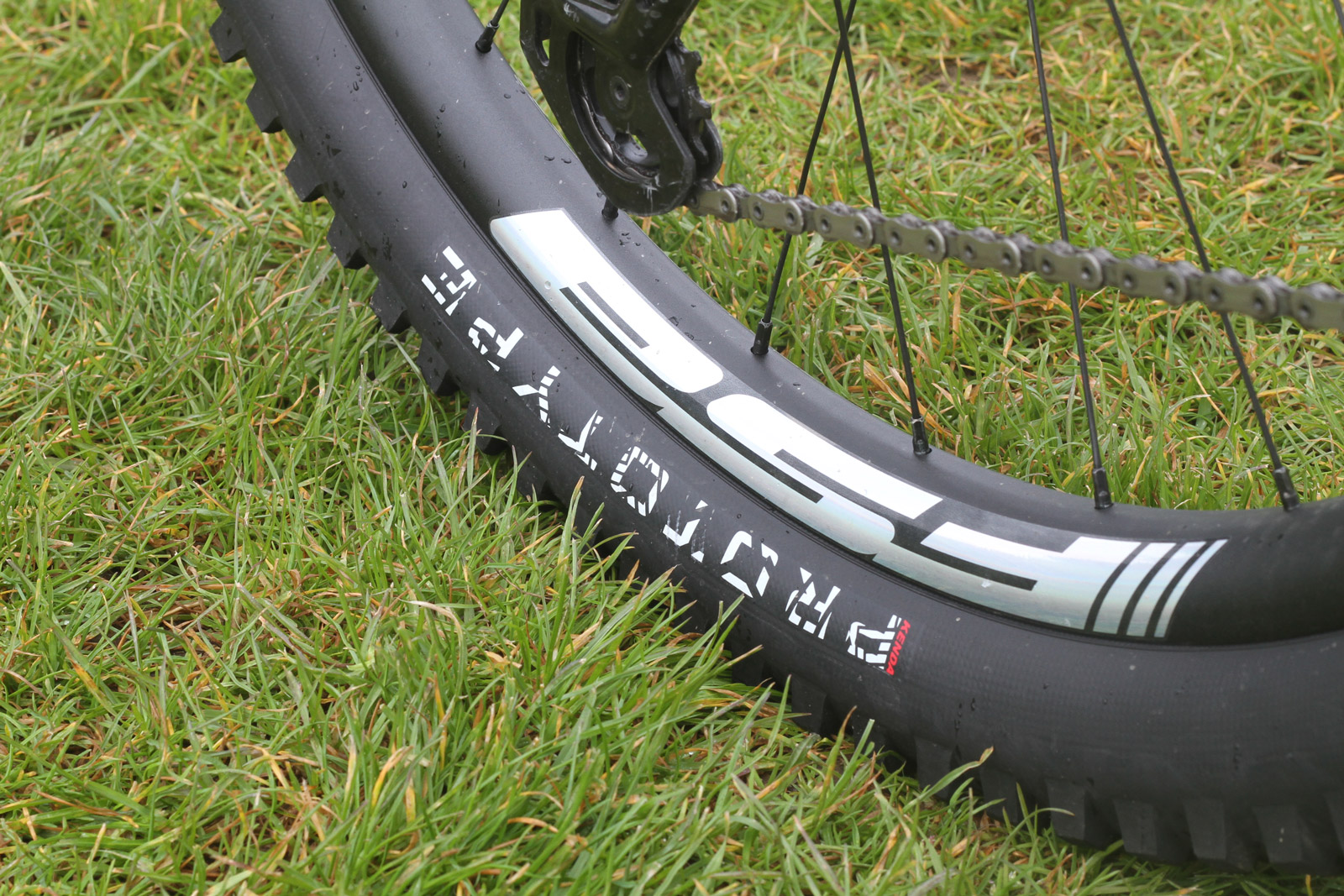 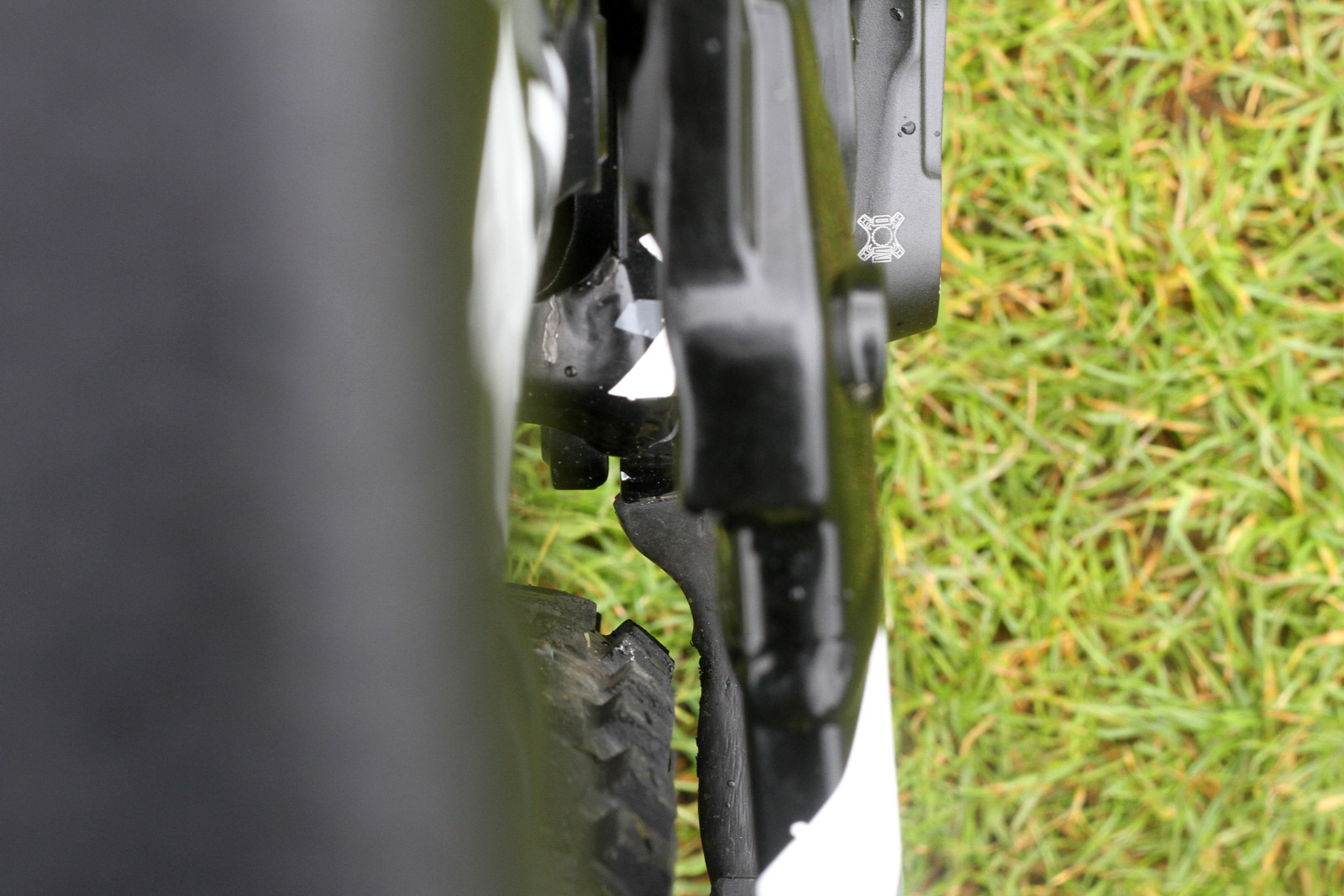 This much clearance with that prototype 29″ x 2.4″ Kenda Gravity Casing tire

Matt has some prototype Kenda gravity-casing tires seated on an FSA Afterburner aluminum rims laced with to instant engagement hubset from Onyx. He will likely run 22-23 PSI in the front, and 24-26 PSI in the rear.

When race tracks are super rough and rocky, and/or lift assisted, Matt runs Rimpact Pro tire inserts in the front and rear. Here in the Tweed Valley, course organizers are serving up a 42.5 km course with 1,797 meters of non-lift assisted elevation gain. The vast majority of the stages are  made up of loamy or hard-pack singletrack with few rock gardens to speak of. Thus, Matt will forgo use of the Rimpact Pro in the front tire, running it in the rear only. 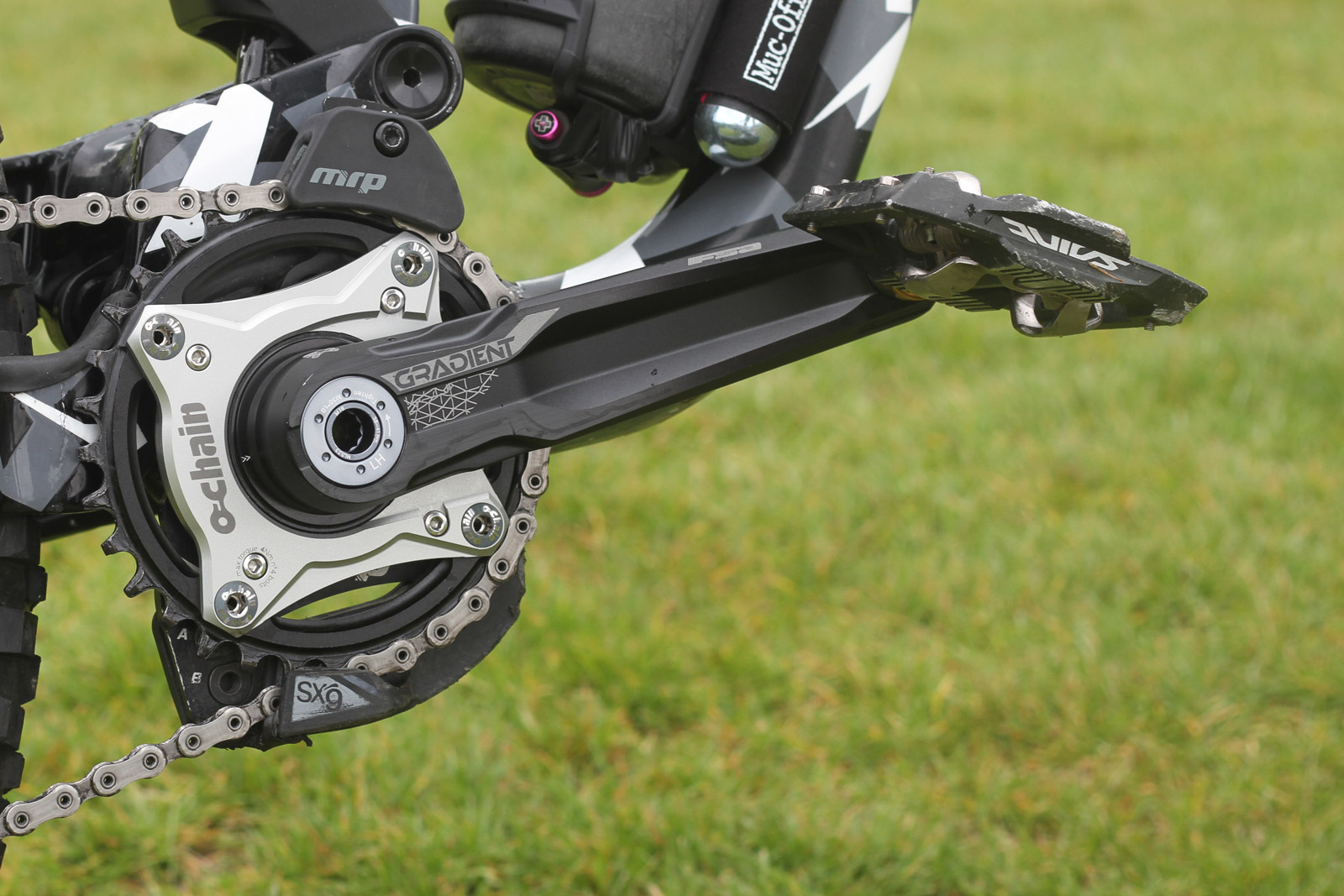 With the sprag clutch mechanism of an Onyx hub providing almost instant engagement, the use of an OChain Active Spider is a smart move. Matt runs his in the 6° setting, and tells us he would never race without one.

Matt tells us he would normally run his bar width at 780mm, but for the infamously tight tracks of the Tweed Valley he has shortened them further to 760mm “which feels absolutely horrendous, but it makes things a lot easier here. Even with 760mm, you still have to shimmy your bar around sometimes”. That’s a 40mm rise alloy bar with a 50mm stem from FSA. 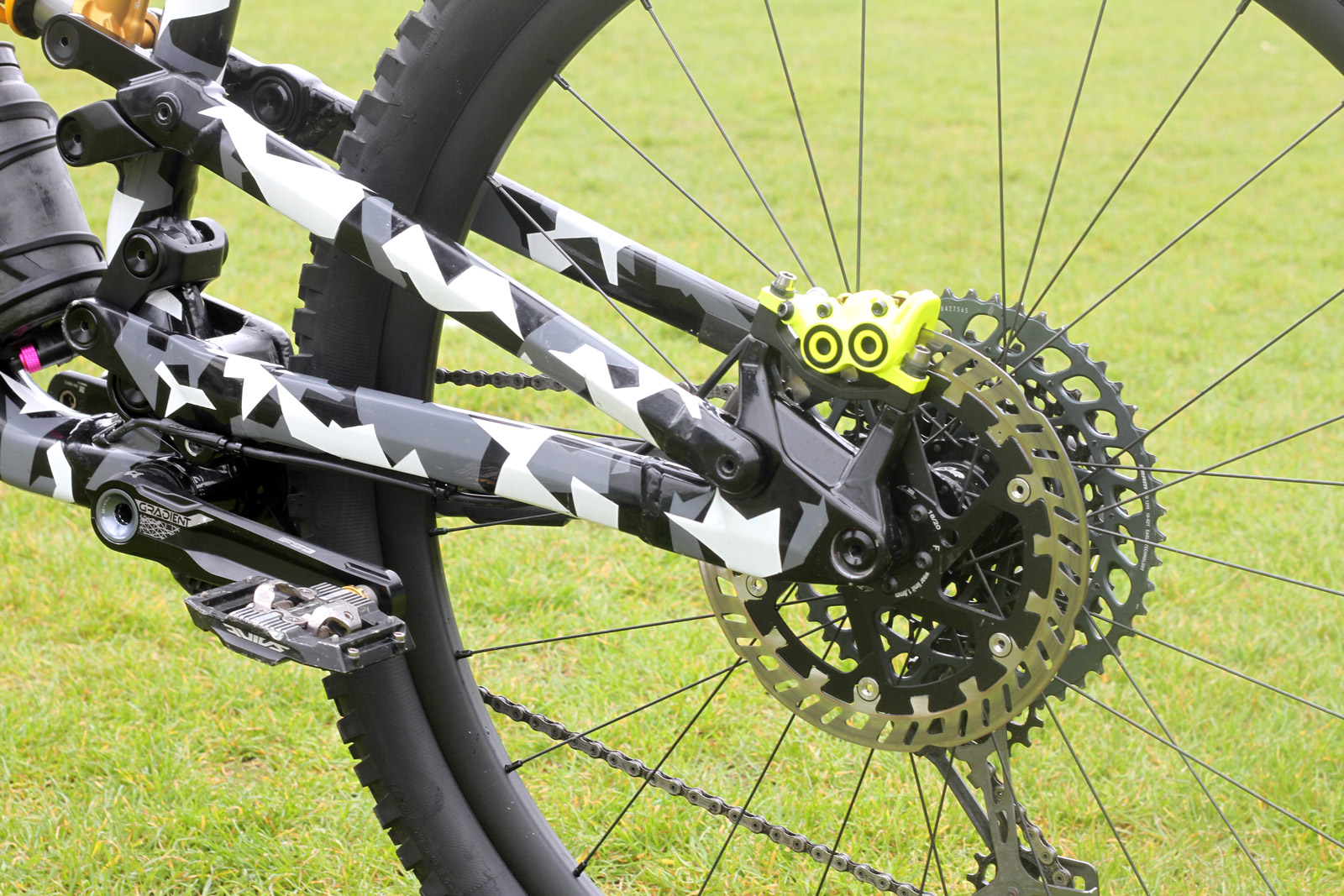 Matt says the team may be testing new swing-arms over the next week or so, too

Magura MT7 4 Piston brakes take care of speed management, with a 223mm rotor up front and a 203mm rotor in the rear. It looks to us like that would be the maximum rear rotor size permitted by this frame. 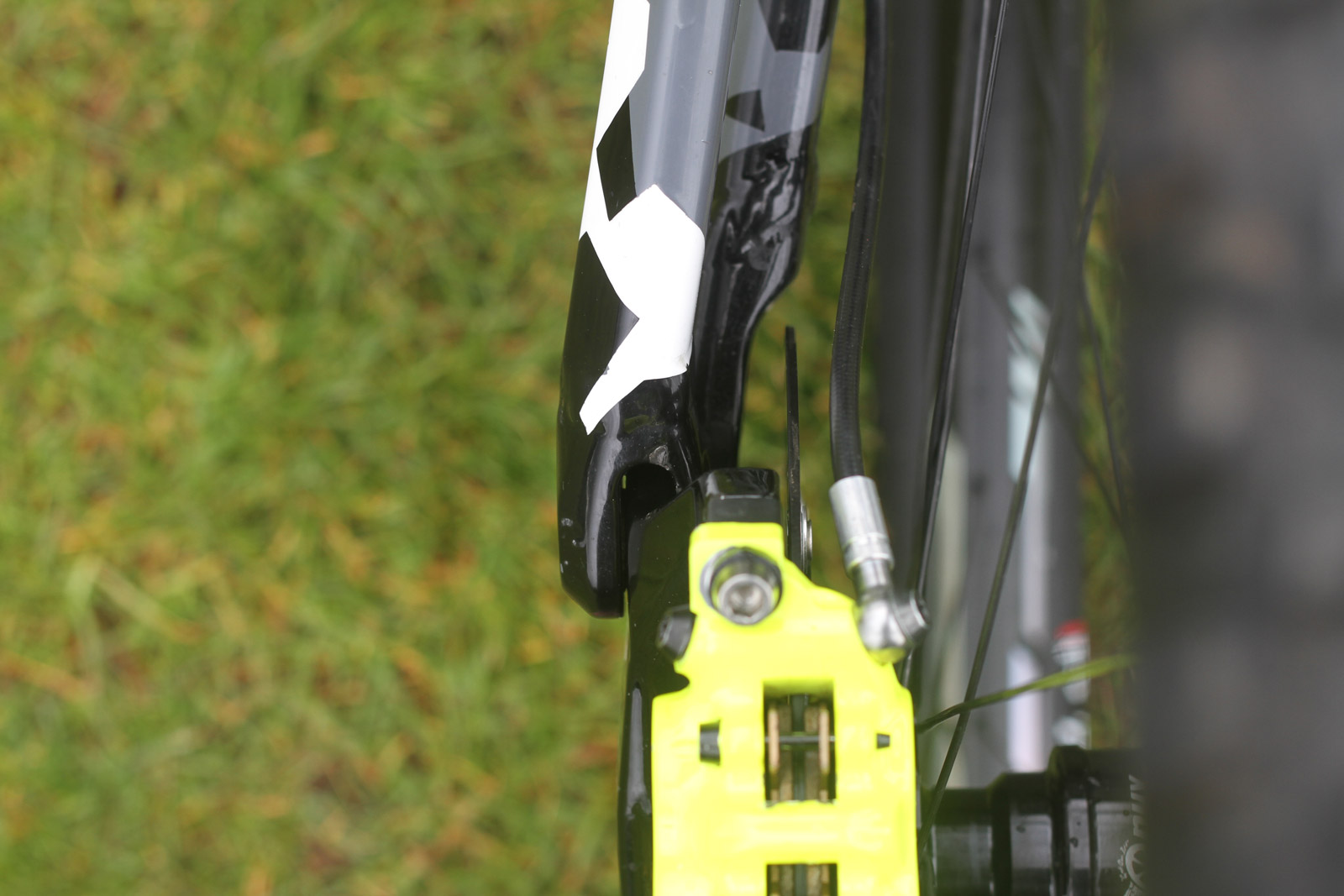 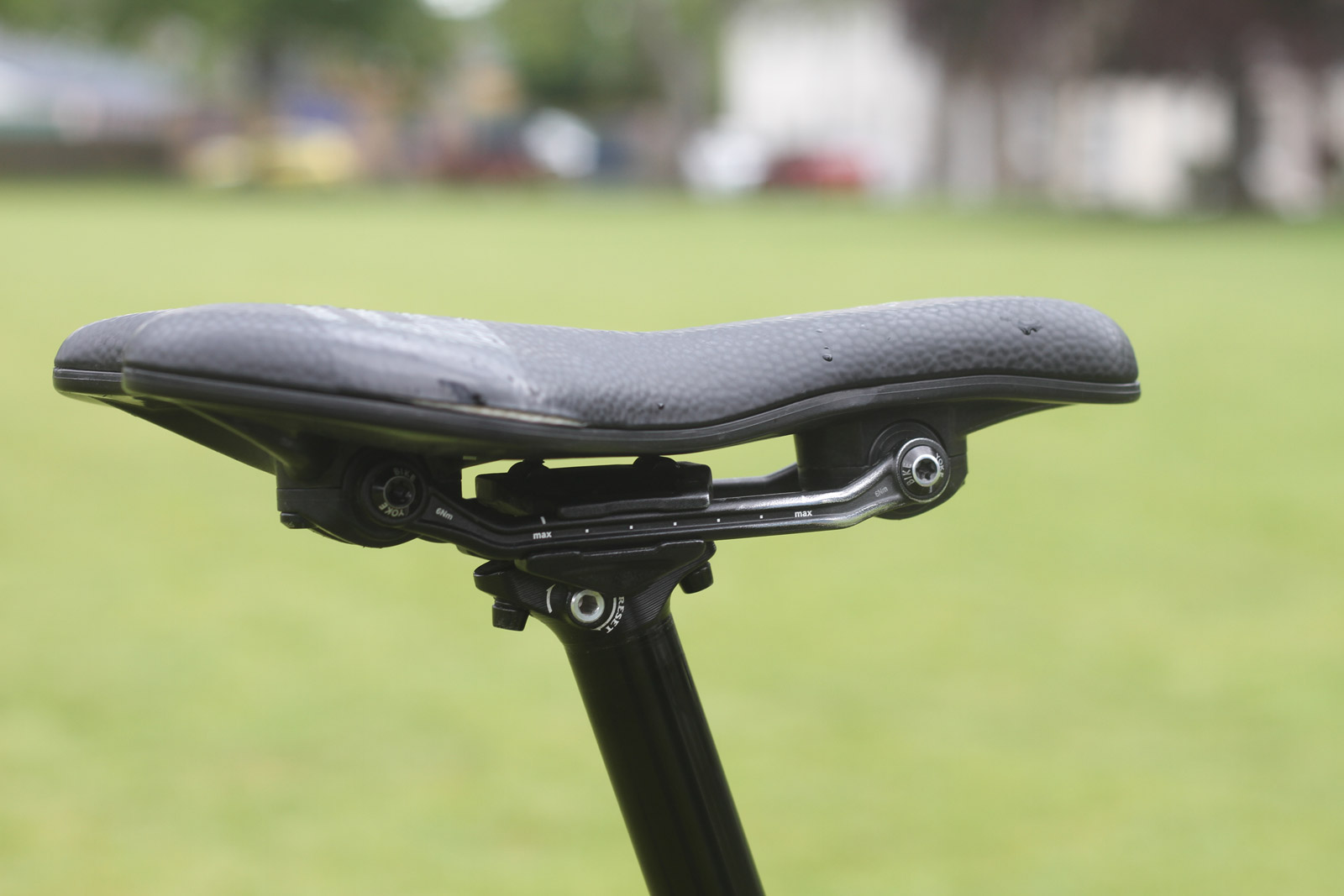 Bike Yoke are a sponsor of the Polygon factory Race Team; Matt runs the 213mm drop Revive, their longest travel offering. Atop that is a Sagma saddle. Not your bog standard saddle by any means, this one features their patented rail suspension system supported by elastomers that allow for a tuneable amount of side-to-side flex. Matt runs the regular set of shock absorbing elastomers but hard ans soft ones are available too, so you can tune it to your liking.

A spare quick link taped to the dropper cable… a spare SRAM UDH hanger on the upper shock mount, accompanied by an innertube, Muc-Off Stealth plug and tire plugs.

Matt carries a lot of his tools and spares on the bike itself. Using good old duck tape he tapes the Muc-Off CO2 inflator head to the underside of his bottle cage, mounted via an adapter that itself holds two 25g CO2 canisters. Higher up on the downtube we see a spare tube strapped down alongside some anchovies (tire plugs), with the Muc-Off Stealth Tubeless Puncture Plug Tool demoted from its intended position in the handlebar, onto the frame.

We wish Matt and all the whole Polygon Factory Racing team all the best for this weekend’s race. You can follow Matt’s journey on Instagram.

I leave you now with a video introducing the all-new Polygon Factory Race team.

Jess brings us the goods once again! Cheers.