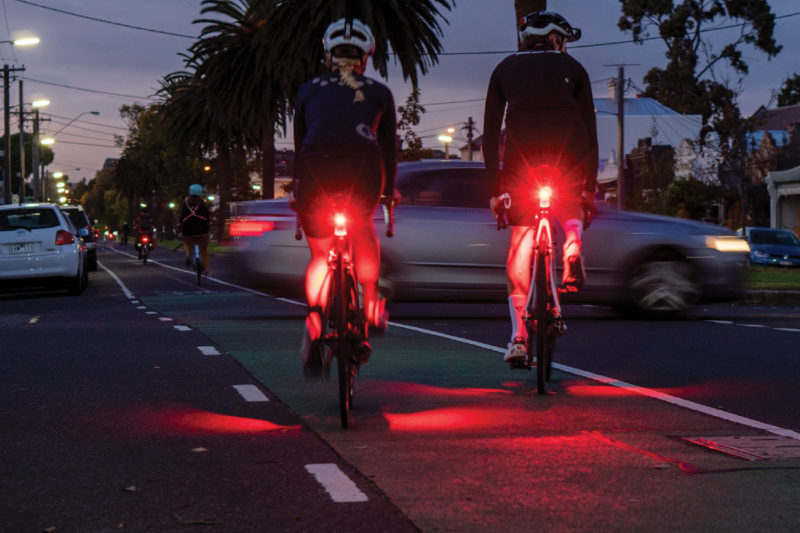 Project Flock has created the world’s first ‘biomotion’ bike light that boosts our visibility at night to other road users by reminding drivers that cyclists are in fact human. The new concept lies in the fact that we don’t need to blind other road users to ensure we will be seen, but rather we can trigger drivers’ attention by lighting up the motion of our pedaling legs, thus unconsciously signaling to their brains that we are just people, too…

Be seen 5.5x sooner*. And be seen as a human, not just another inanimate object in the landscape.

Other bike taillights rely on intensely bright light output or eye-catching flashing patterns to ensure that we are seen while riding at night. But Project Flock has a new concept that illuminates your legs while pedaling, catching the attention of fellow road users at night by signaling their brains with a familiar pattern of human motion.

What is a biomotion taillight, and why does it work? 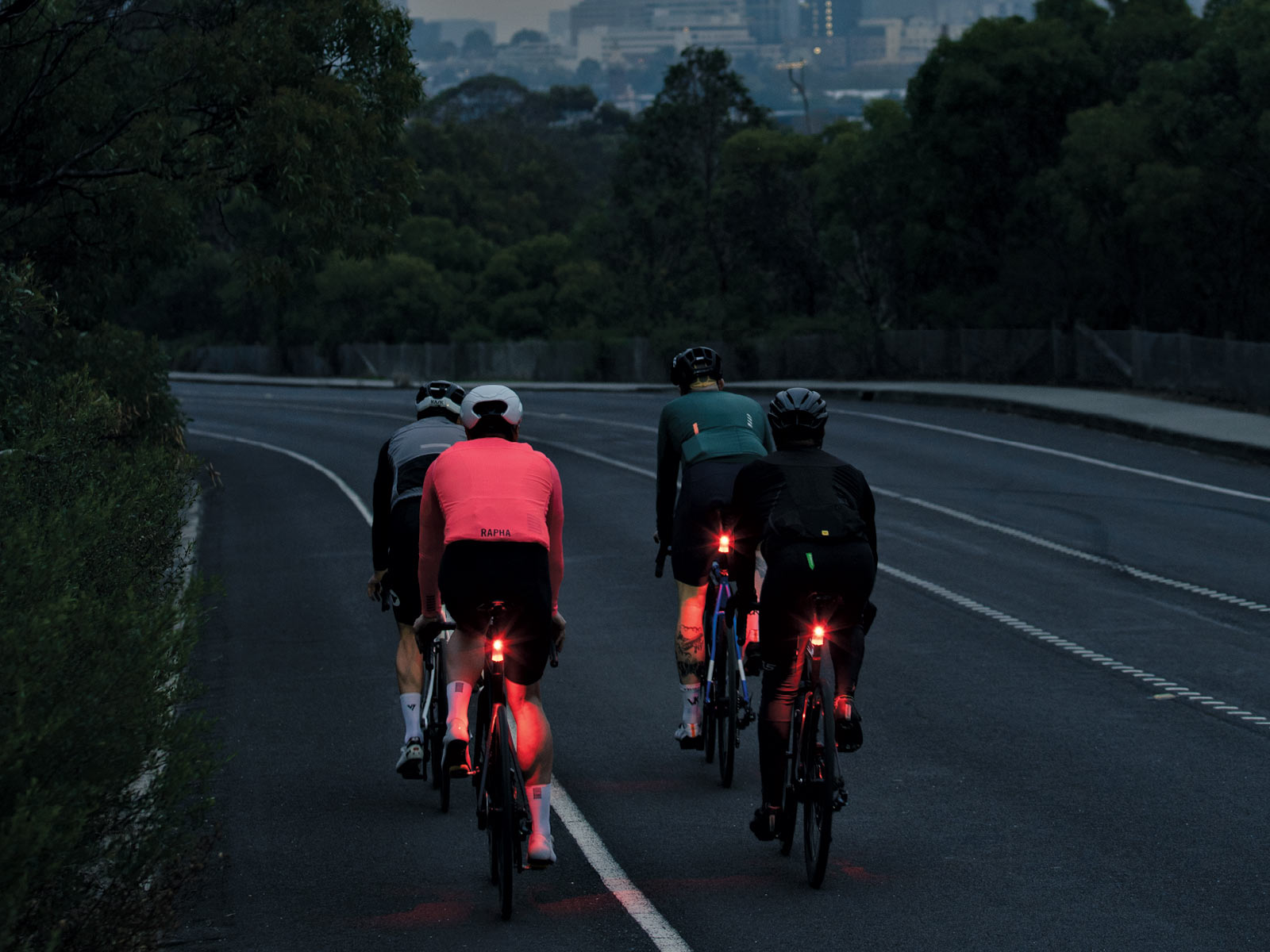 It’s all based on Clemson University research that showed “highlighting a cyclist’s biomotion was proven to remarkably increase their conspicuity” (*Edewaard et al. 2017). Seeing a cyclist moving in a more human way helps other road users’ brains more easily identify with them. And it also helps give a better sense of scale of the person on a bike, so it’s easier to perceive how close they are. 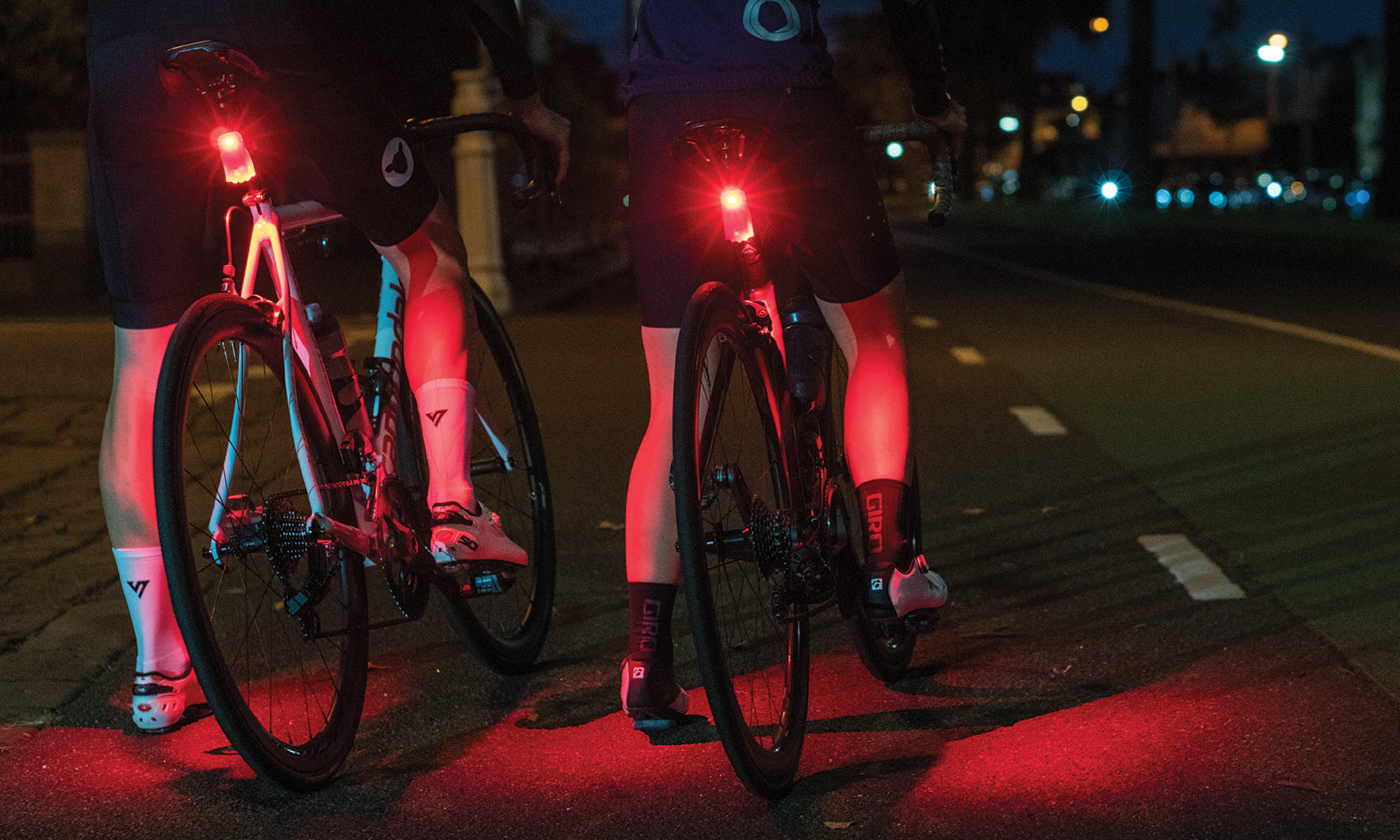 So Melbourne, Australia industrial designer Tim Ottaway decided to take advantage of this cognitive ability of our brains to recognize human movement almost instantaneously and created this Flock Light taillight that shines light down into a rider’s legs as they pedal. As a result, the lit-up motion is more important for visibility than how bright is the emitted light. So the light doesn’t need to be blindingly bright or annoyingly flashy for you to be seen. 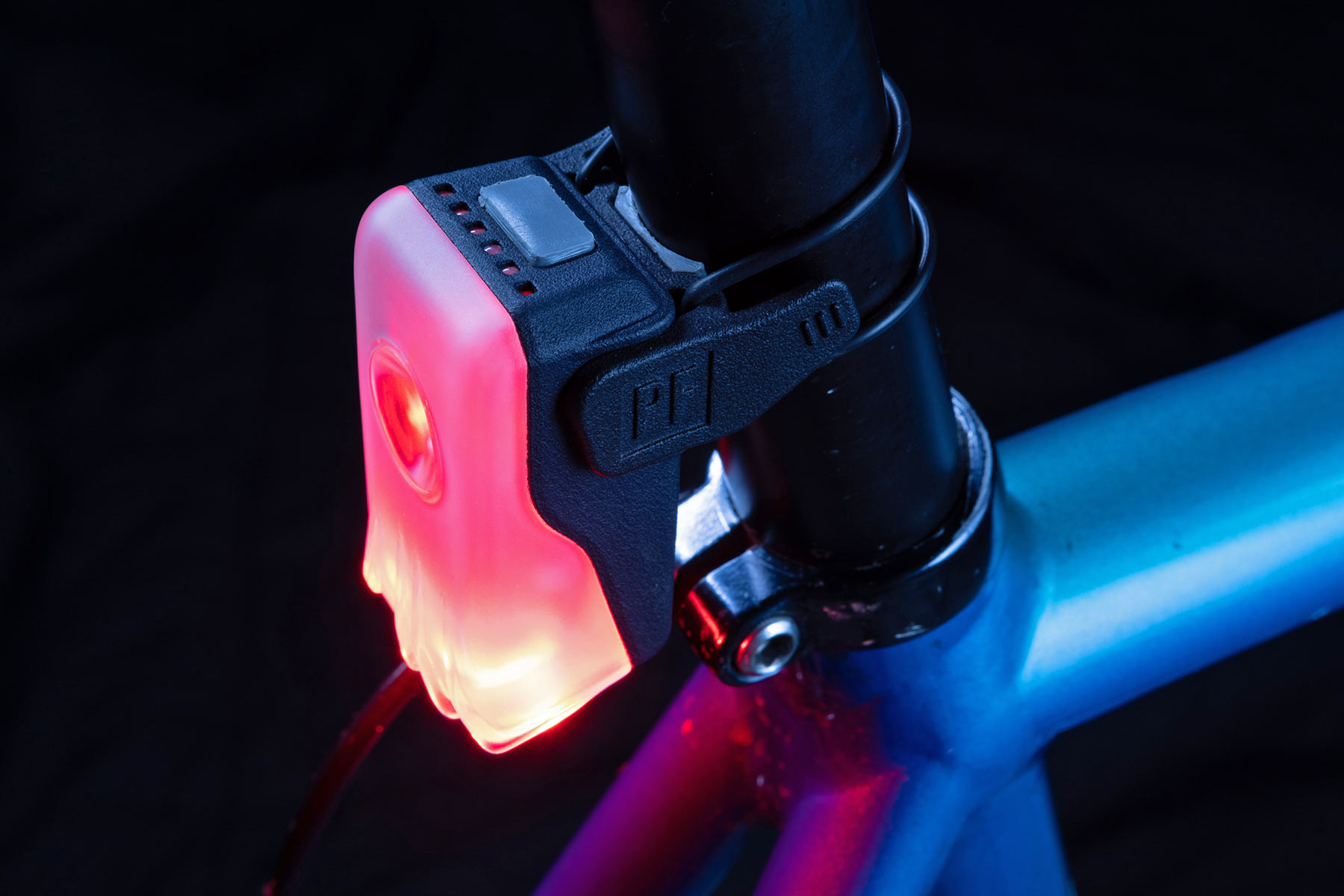 Now, it’s getting Kickstarted into production, with the hope of helping to reduce cyclist-related crashes and collisions… 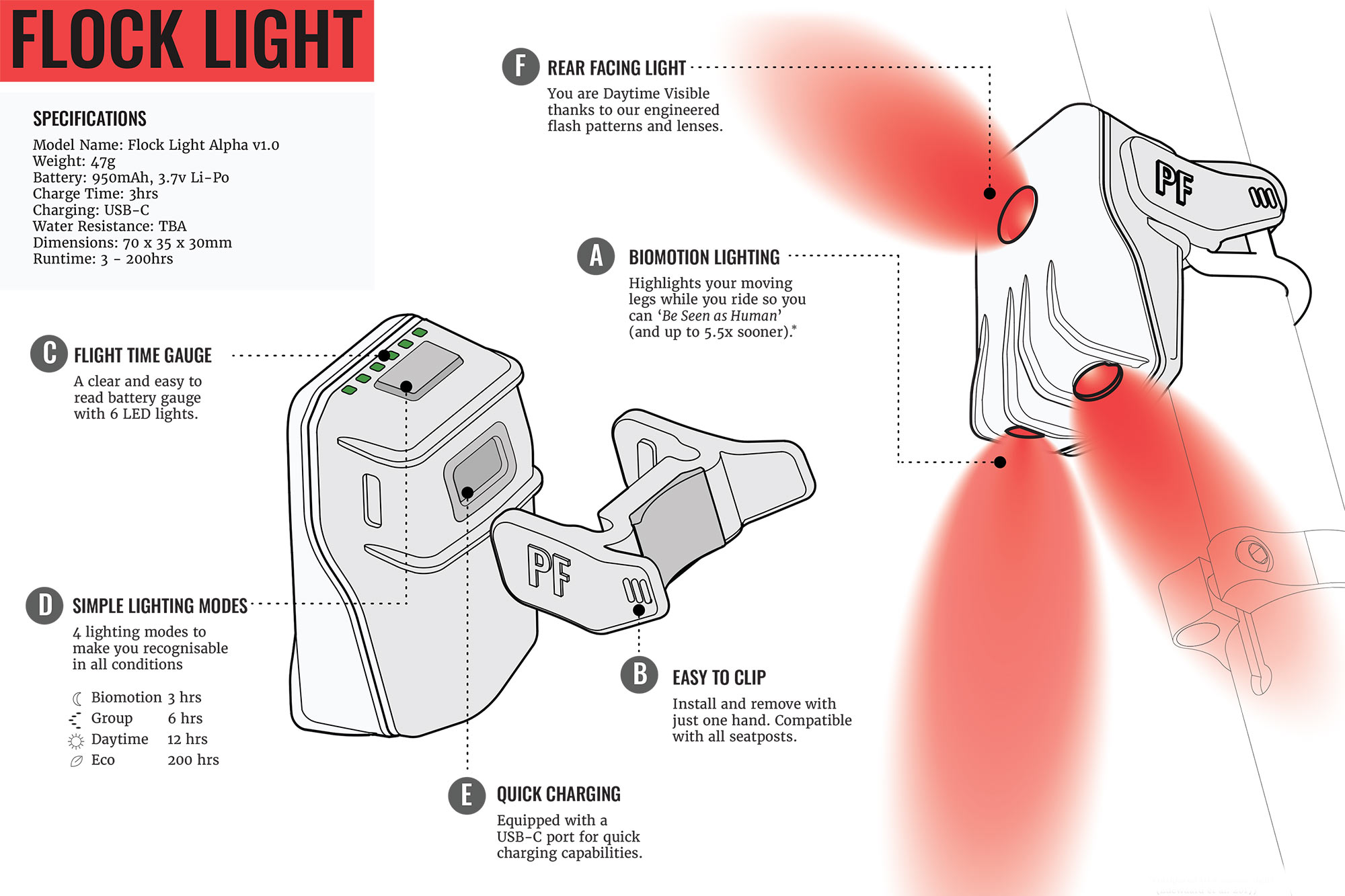 From the outside, the biomotion Flock Light looks a lot like other taillights that strap to your seatpost, plus the rather unique-looking fins that also function to direct light down at the back of your legs. 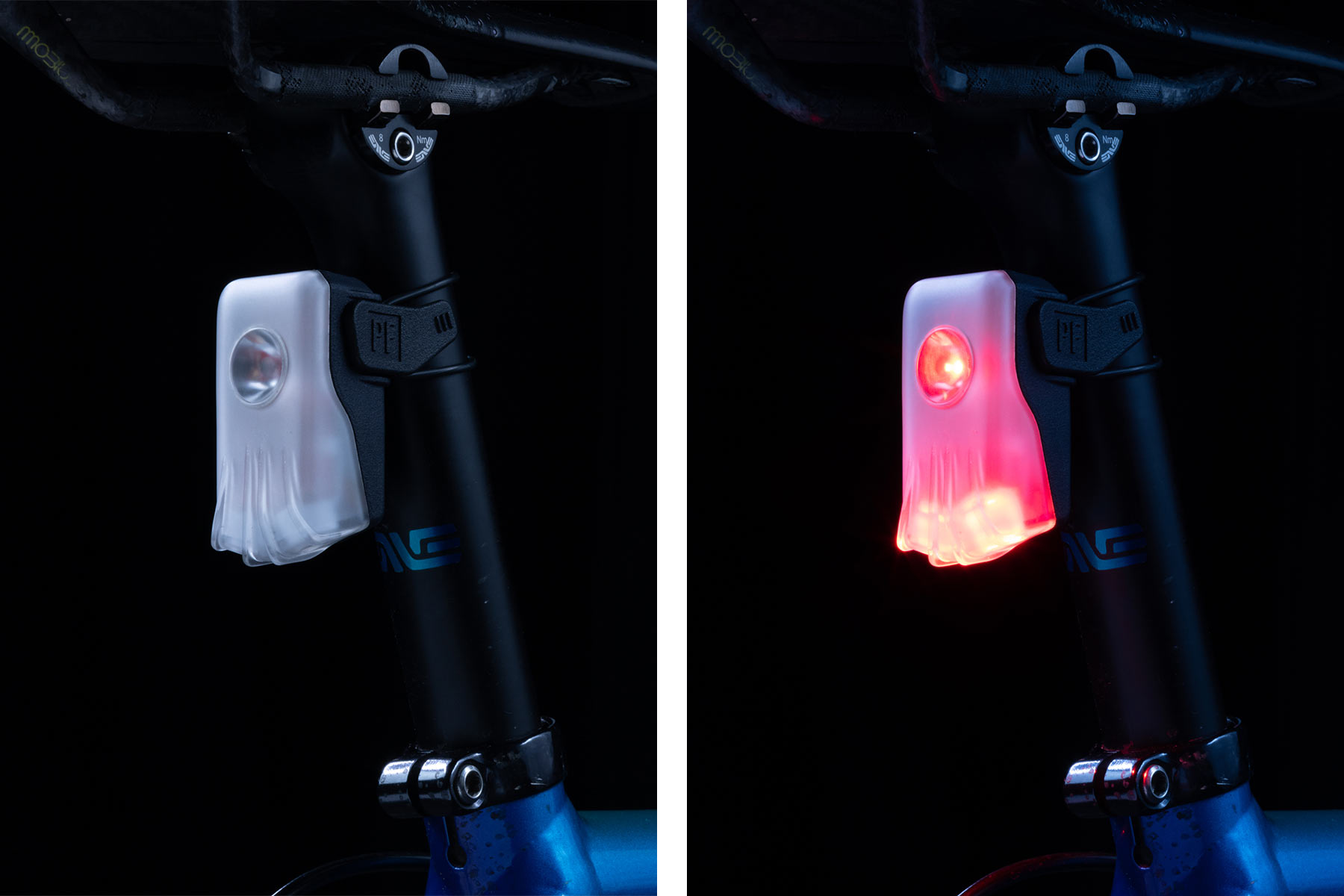 The 70mm tall x 35mm wide x 30mm deep taillight itself weighs a claimed 47g and is attached to your bike with a clip on-mount and rubber band that loops around your seatpost. (The clip stays attached to the bike when you remove the light to change it.)

It packs a 950mAh battery inside for a claimed 3 hour run time on its maximum output Biomotion mode. There is also a less bright Group ride mode that still includes the biomotion function at a reduced intensity level for 6 hours of lighting. A Daytime mode using just the conventional rear0-facing light brings it up to 12hr on a single charge, or even a max of 200hr on low-power Eco mode, which is automatically switched on once you’re almost out of juice. 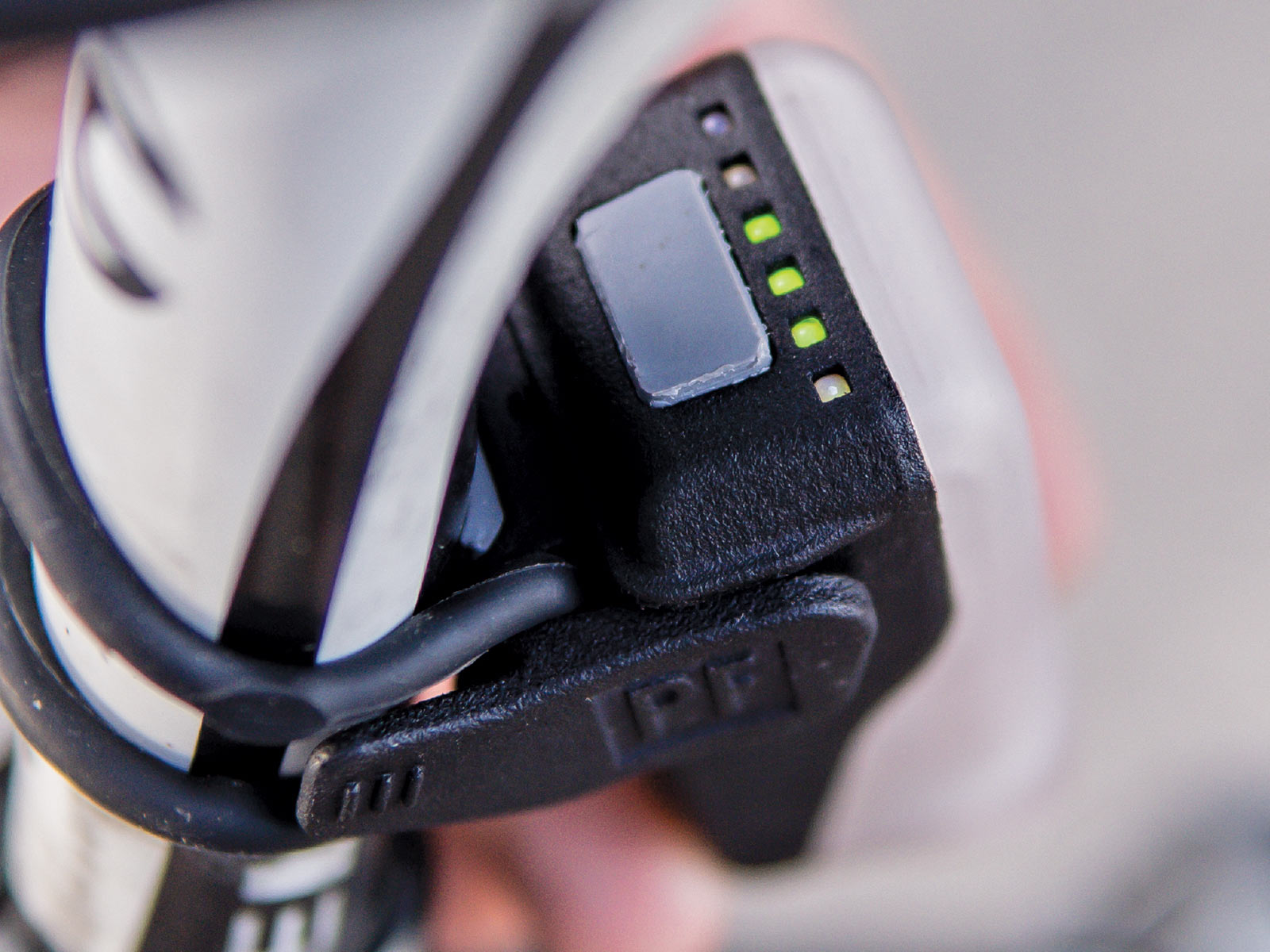 The Flock Light also gets a simple 6-LED Flight Time indicator gauge on top that shows remaining battery life so you are less likely to get caught out with a dead taillight on the ride home in the dark. The taillight is USB-C rechargeable (in 3hr), with the clip-on mount doubling as a seal for the charging port when installed. 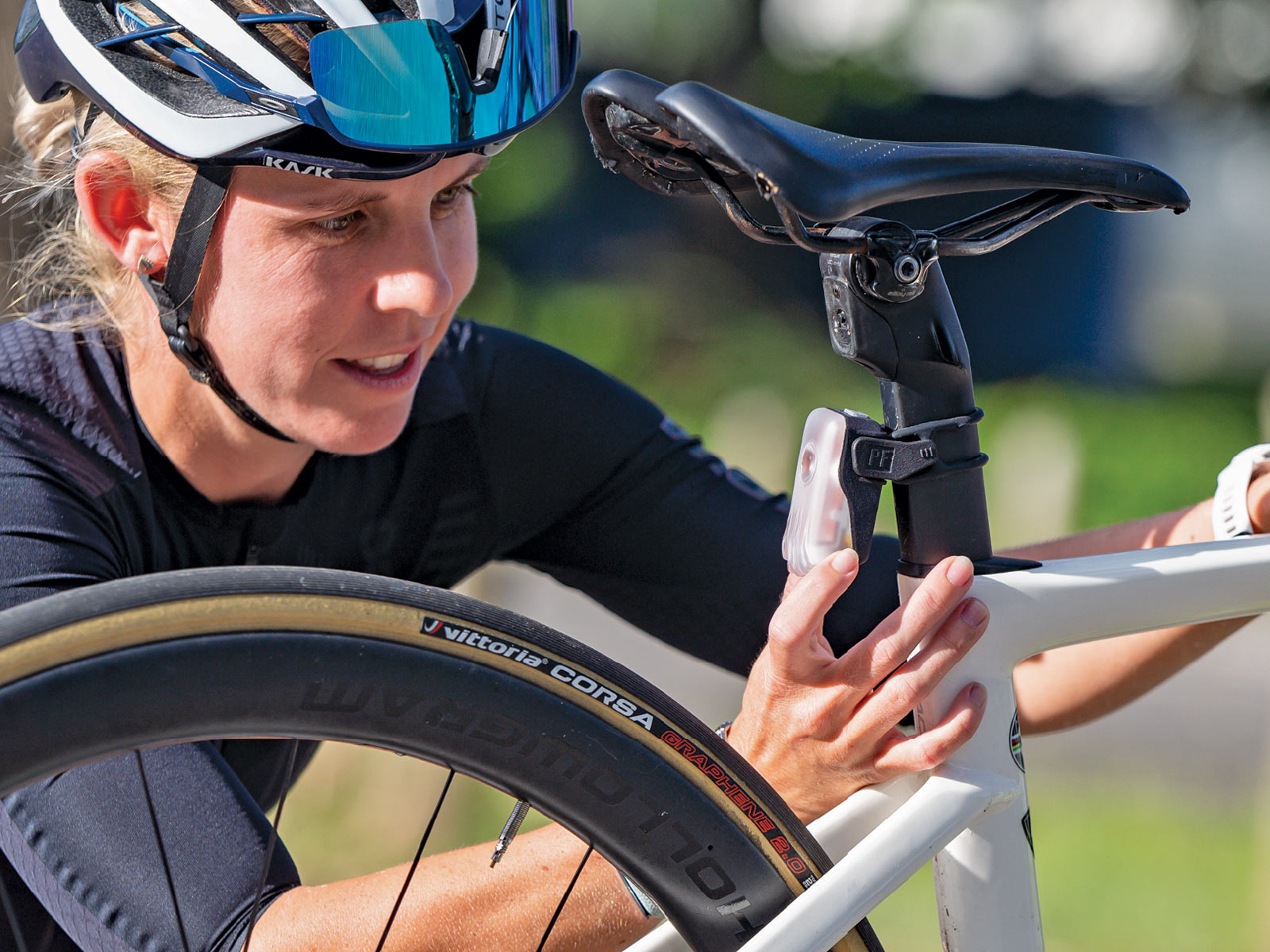 It’s still going to be quite a while until you get one of these innovative taillights in hand, though. Flock has already exceeded their funding goal in the first few hours of their crowdfunding campaign, but is only expected to ramp up tooling and then manufacturing from the start of next year. Back the project now, and expect a Flock Light taillight around September-October of 2023.

Interesting. Would have considered for my commuter bike except panniers would block the reflection. Most of the photos here include white people in shorts, so it would be good to see how it works for a more diverse set of riders and cold weather tights, which are when visibility is worse.

Hey PStu, thanks for the comment, Check out the Kickstarter video as there are a couple of shots of people riding in long black bib knicks. We’re looking forward to getting out and testing with more riders as we draw closer to manufacturing. The Kickstarter page also has a Q+A section where we talk a bit more to your queries. All the best! Marie & Tim.

Good idea, I’ve always thought attracting attention with legs/feet moving makes sense, so now on the road bike I go for neon socks and sometimes clip a light onto the the traffic-side one.

“Biomotion” works, cuts right to our instincts, so whatever helps do this more is great, this looks like a great idea/product.

Alternatively and especially for ebikes, check out ARCLIGHT pedals by REDSHIFT, they did a kickstarter with smart led lighted pedals last winter. I ordered three and have been very happy w them and their versatility, and they definitely give even more visibility – like 360 degrees of “biomotion” light awareness that isn’t dependent on reflectivity of the riders legs. You can find them online now, no wait.

Downside is their weight and incompatibility with clip ins, but they are fantastic for our ebikes where those aren’t even close to factors. This tail light getting launched seems like a good option for traditional cyclists who love their existing pedals.

Nice. I do worry about blinding Drivers with intense flashing lights. It’s thought to be why Cars run into the back of police cars.

I have seen this type of light before. DING LIGHTS has a very bright downfacing light that not only shines up the rider, but a large ground area too with a great forward light. I backed the original DING Light from Kickstarter back in 2015. The light has been brilliant, for many years in all weathers, but the battery is now not holding a lot of charge. If the DING Lights had a rear version, that would be perfect for riding safety. Tried to see if I can get a new battery from them, as the housing is able to be unscrewed, but seems their website is down? are they still in business? They are also based in Australia.

Hate to be “that guy” but isn’t this just the MagicShine Seemee 200 which is available now and at a much cheaper price?

Paul
Reply to  And

The MagicShine Seemee is excellent and also has USB C charging. I’m wishing some of these light would start using wireless charging. I find the most frustrating part of charging bike lights is plugging them in.

A few years back Specialized had a Flux Tail light that flashed back and up direction to highlight cyclist’s body to increase rider visibilty.

I agree with J Brook DING Light FL1 was a good light, a bit on the large size and only fits below the handlebar, but the light facing the ground was awesome, with also a 1000 lumens going forward. I lost count the amount of riders that asked where I got it. It made it very easy for others to tell where you are going and how fast from all directions. Strange about the website, its says opening soon new launch? Hopefully still selling the FL1, I would buy it again. I like the idea of project flock, shame its not ready for over 12 months. I will wait until its in the shops.

I can’t for the life of me remember the brand, but I just tossed ( charging port failure after 8 ish years?) my rear taillight that in addition to the reg red, shown also a strong red beam of a long line to the side like your own little bike lane to give relationship of space.

Am I the only grumpy old dude who want to be given the option of a permanently mounted bracket where I can clip my light back to the adjusted position every time. How long do the rubber gaskets last, really, and how incredibly easy are they to steal?

I mean, it’s OK for a road bike, but on my commute I often reach back and attach my light at speed when I change my route and go through that tunnel after all. Then I park in town for hours. A bracket should accommodate both these scenarios.