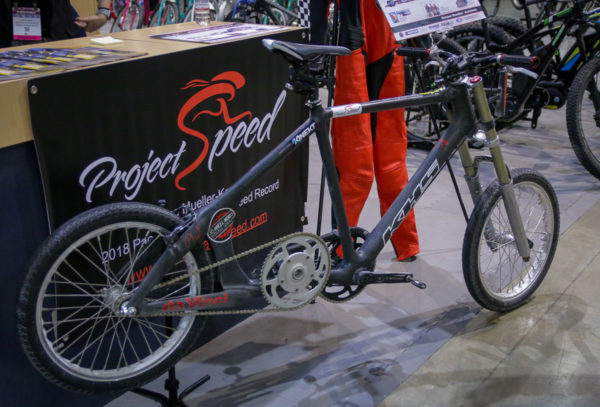 The last time we caught up with Denise Mueller-Korenek, she was turning heads at Interbike with her one-off record attempt bicycle. That was in 2016, and to be honest, not much has changed – except she has gone faster. Much faster. In a brief interview at Interbike 2016, Denise commented that while she was able to break the women’s paced bicycle world speed record, conditions prevented her from breaking the overall record. But she knew she had the speed. 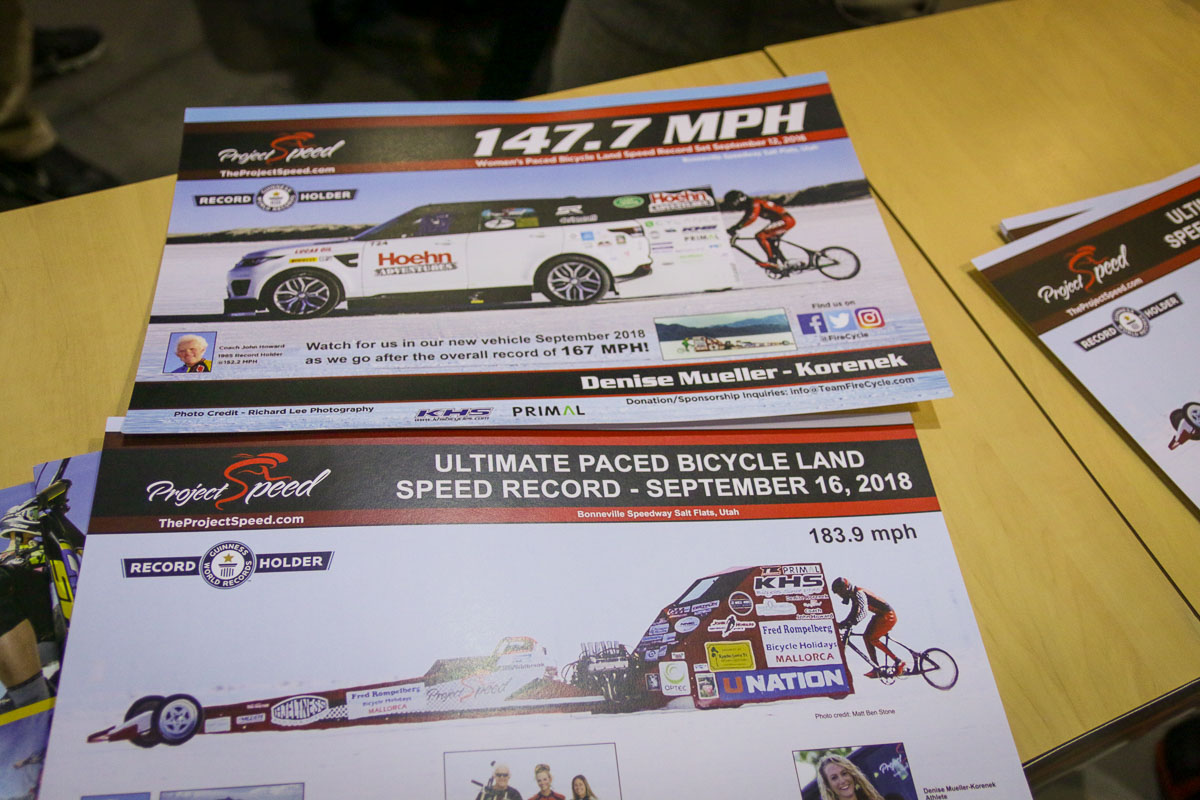 Fast forward to 2018, and Denise proved that she absolutely did have the speed, though she needed the help of a new pace car that was capable of traveling at 183.9mph. One of the best parts about this record attempt may be that one of the previous record holders, John Howard, helped coach Denise to beat his own record of 152mph, and the current record of 167mph of Fred Rompleberg. How’s that for sportsmanship? 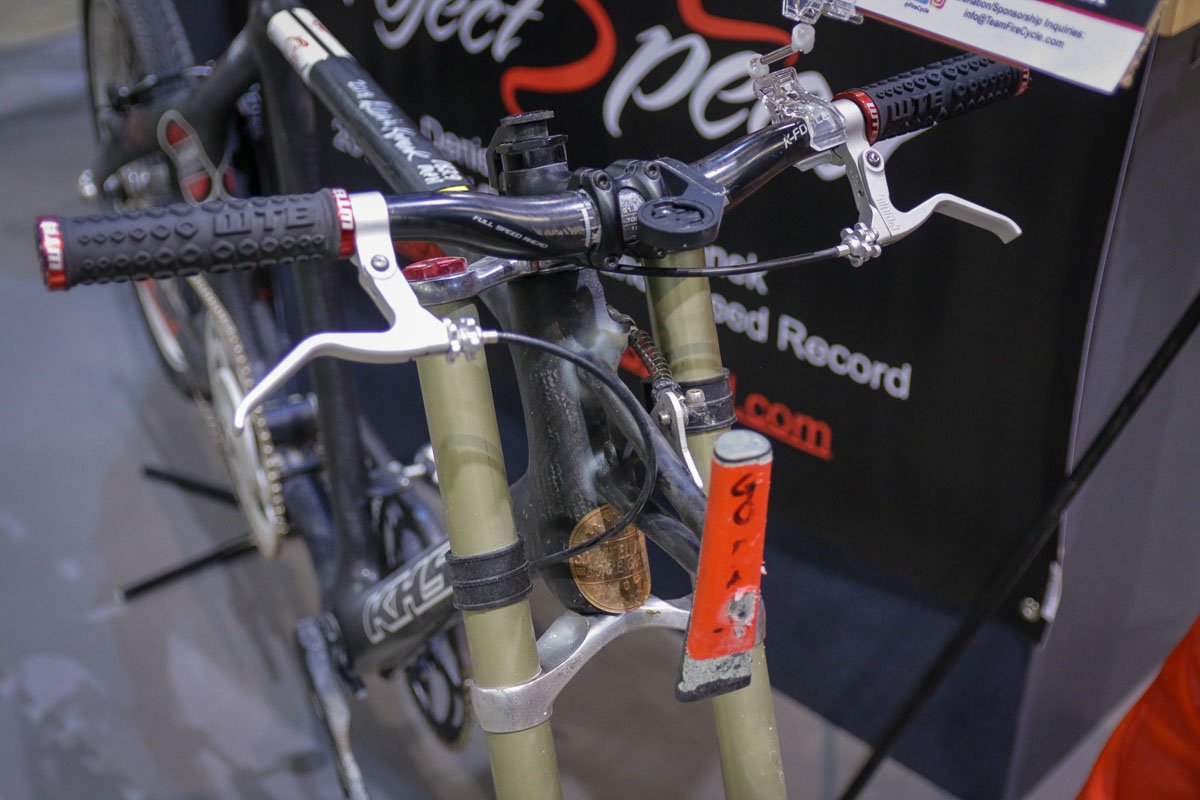 The record attempt involves Denise being towed up to 100mph behind the dragster’s fairing, at which point she grabs what would be the front brake lever to release the tow cable. 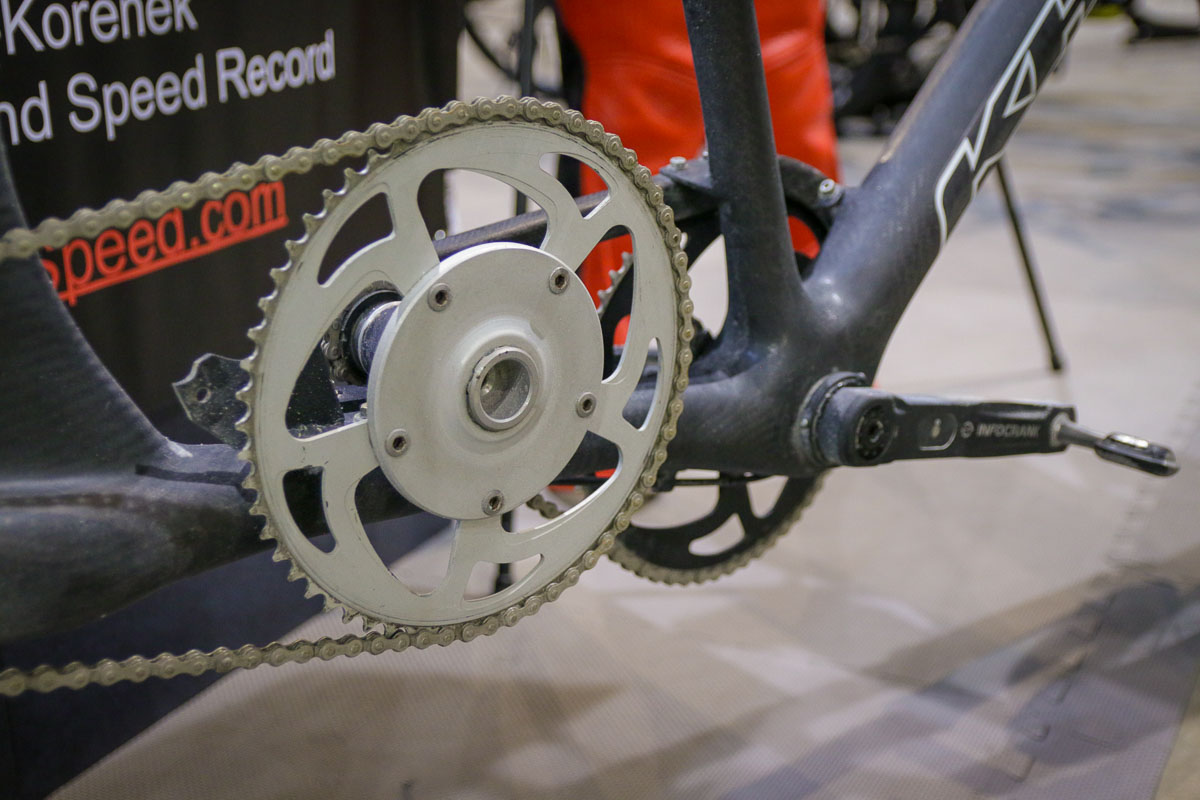 At this point she’s pedaling the double reduction gearing which was custom made by Todd Schusterman of Davinci Designs. The drivetrain features dual 60t chainrings and a crazy 425 gear inches making the bike travel about 125 feet for every revolution of the crank. That’s why it almost looks like Denise is coasting when the video starts out, even though it is a fixed gear drivetrain.

Noticeably absent this year is the custom “sprotor” which used the rear chainring as a secondary brake with a caliper that clamped directly to it. Denise mentioned in our last conversation that in spite of the eye watering speeds, the brakes weren’t really necessary since the bike’s gearing and wind resistance would bring the bike to a halt faster and more controlled than the brakes. 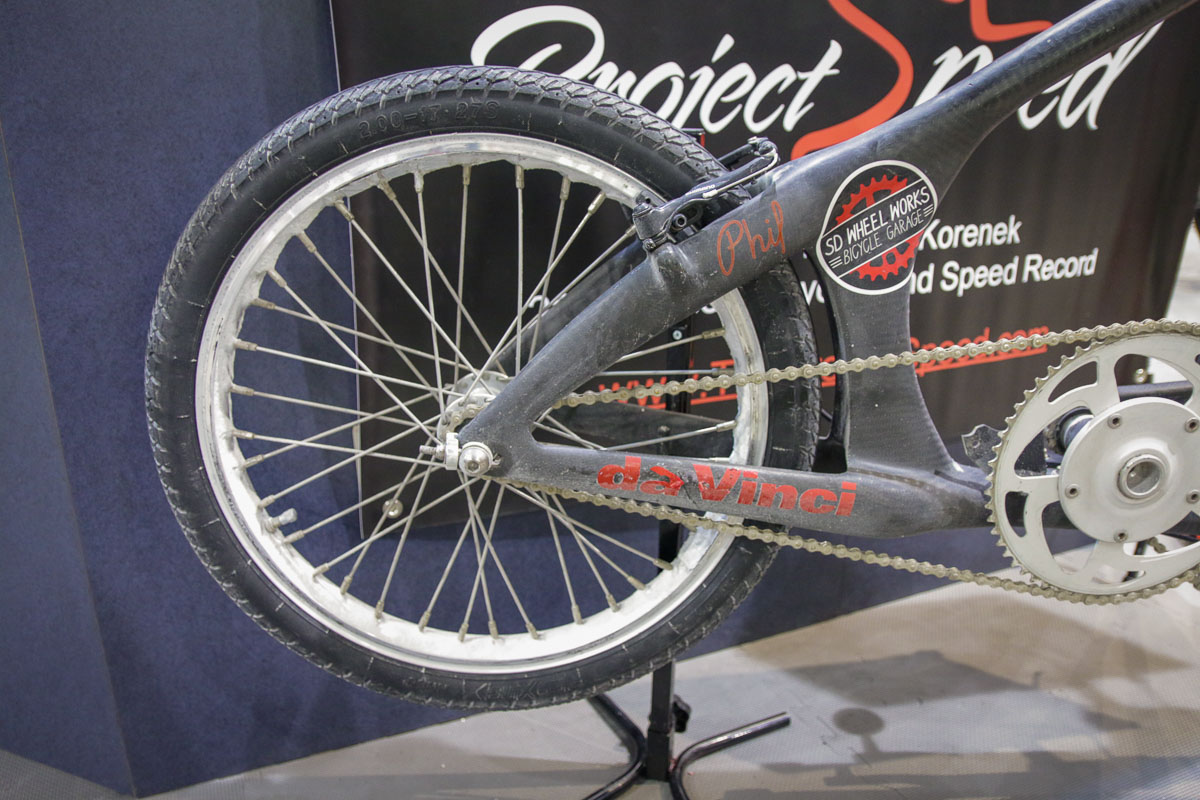 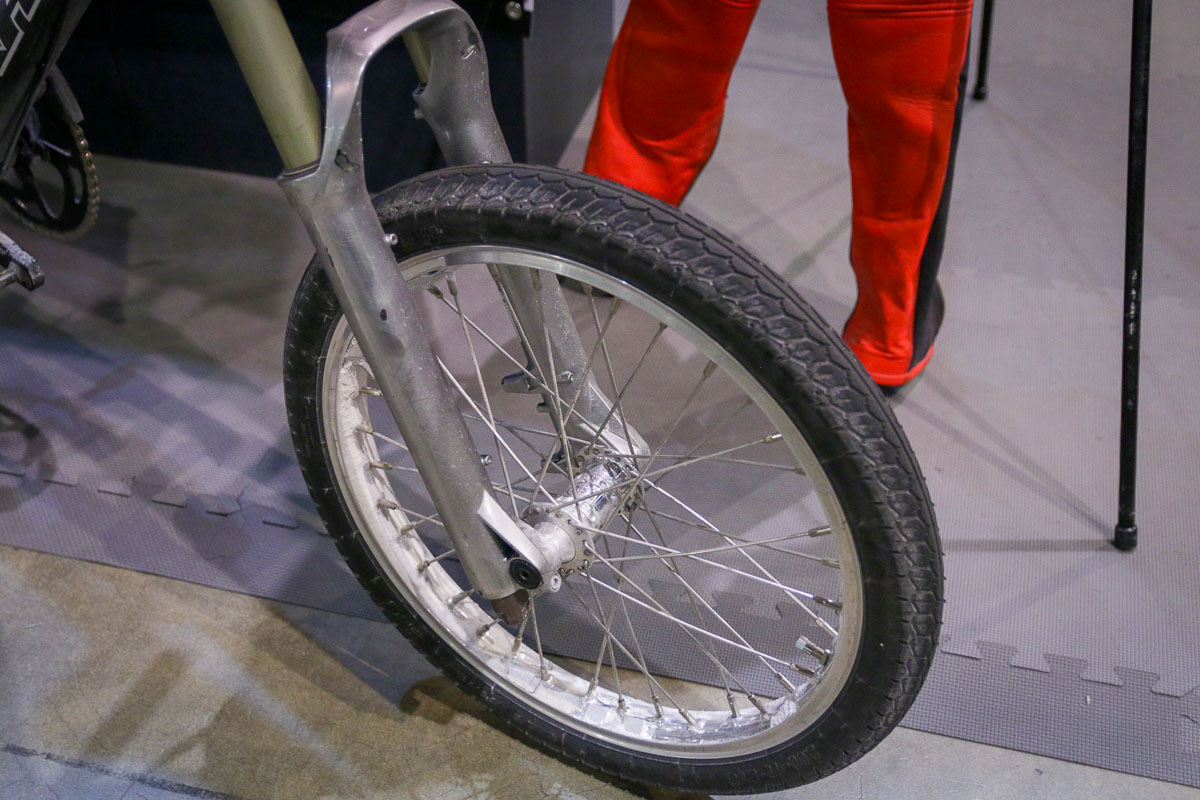 Other than that small change, most of the bike looks the same including the 17″ motorcycle wheels and tires that are speed rated so that they wouldn’t come apart over 150mph. The wheels are also carefully balanced for obvious reasons. 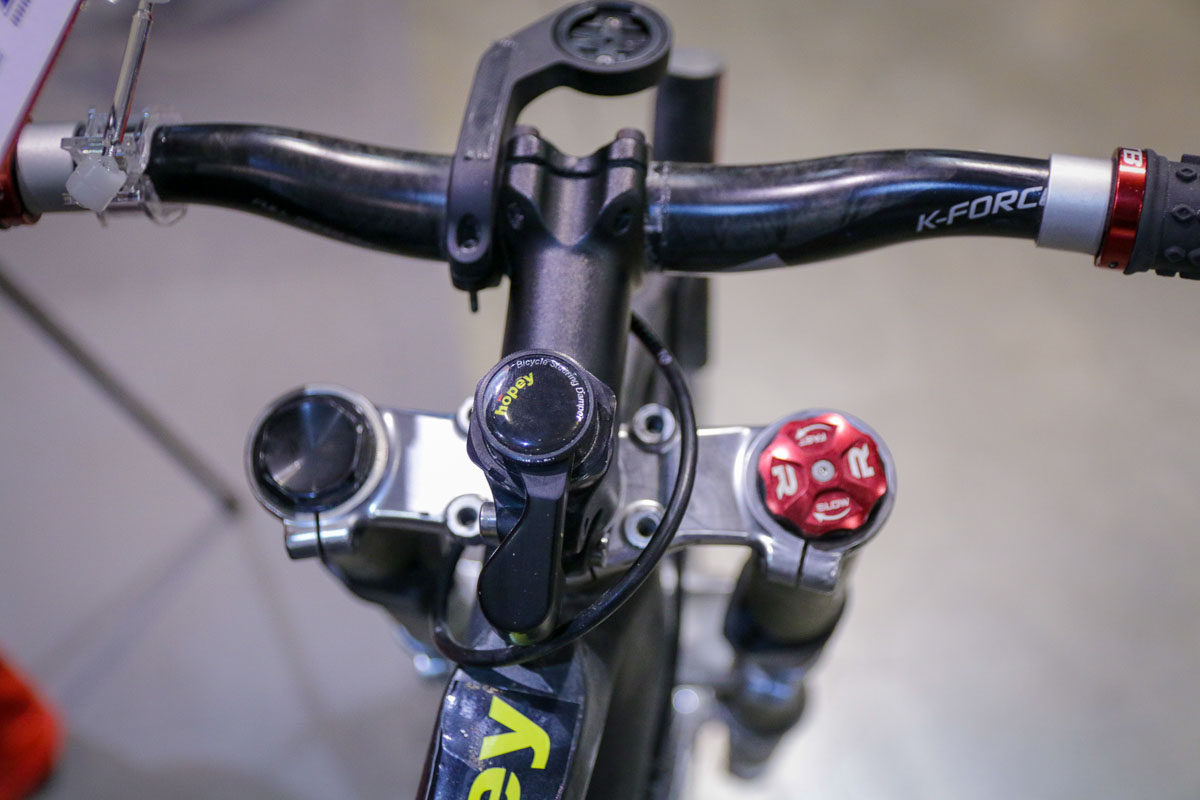 Up front, the controls are minimal with a single left brake lever from Paul Components for the tow rope release (previously she had two levers, one for the brake and one for release), and a single right brake lever (also from Paul) for the rear brake. A Hopey steering damper keeps the speed wobbles in check. The bumper on the head tube is used when Denise was slowing down and also prevented her from getting too close to the dragster. The stem has been swapped out from before and looks to be slightly longer. 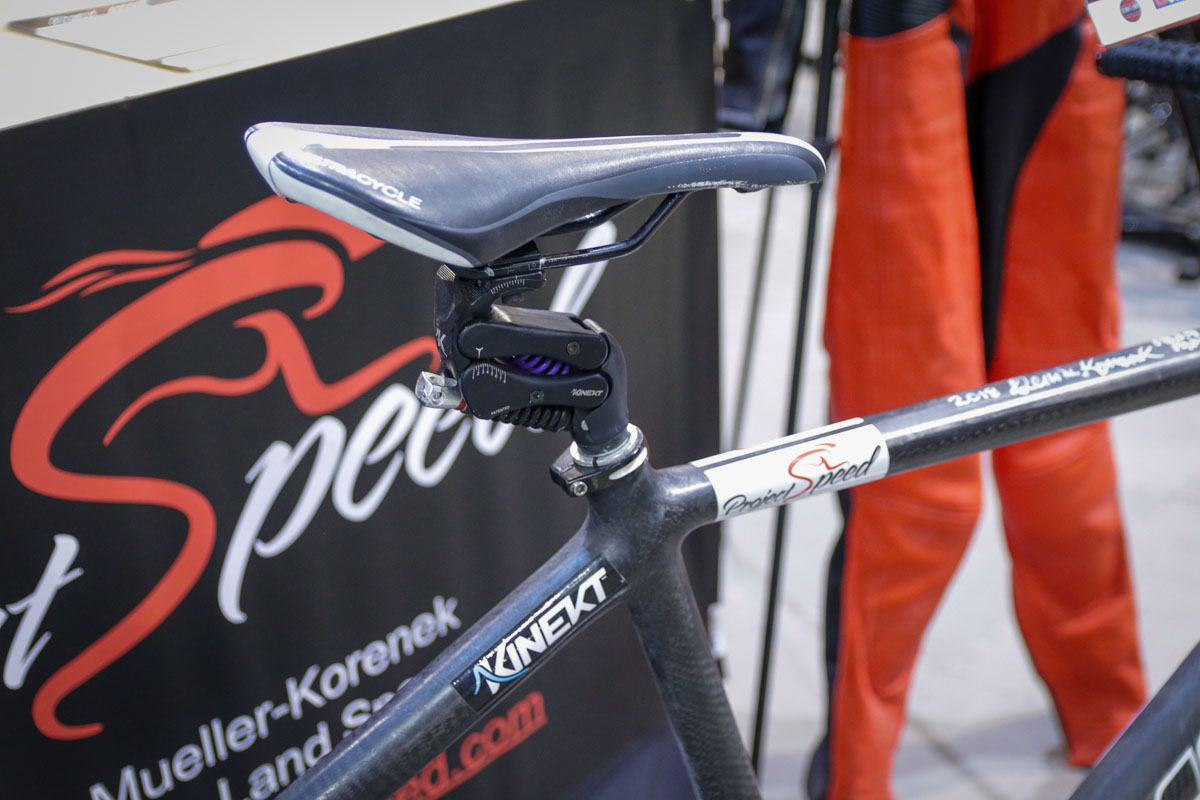 Other parts include the BodyFloat suspension seatpost, Speedplay Zero Aero pedals, and once again a reversed Infocrank with the chainring on the left side. 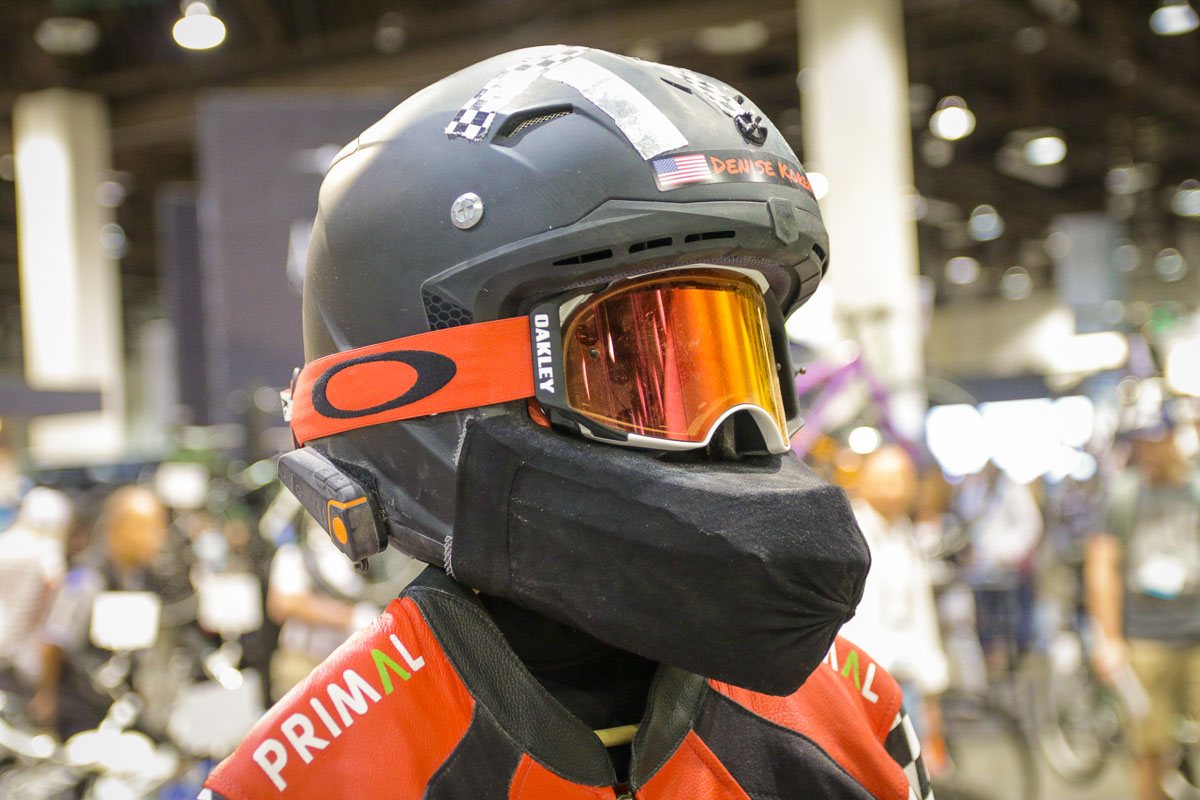 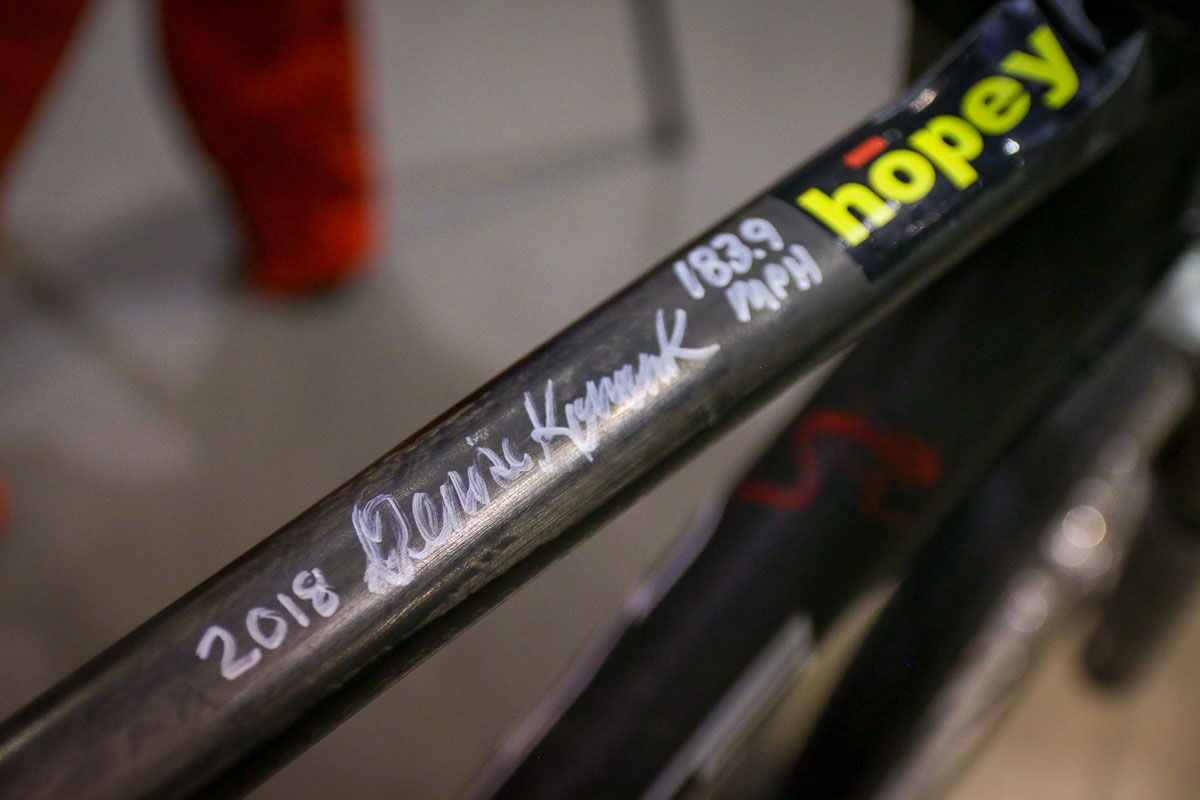 Of course, now there’s also Denise’s signature on the top of the custom carbon frame made by Len Lochmiller with SD Wheelworks. Considering Denise smashed the current record by nearly 20mph, we have to wonder if we’ll see anyone else attempt to break it again in the near future. But one thing is for sure – Denise has pedaled a bike at speeds most of us will never reach without the help of a plane. Bravo.

Adam Hansen’s bike is getting weirder and weirder

Even with that full motorcycle suit, if you crash at that speed, you are going to be destroying body parts. It’s a weird segment of the sport, but I am always impressed by the bravery to pull off a stunt like this.

As a paramedic once told me, moto leathers aren’t really about protecting the rider, they’re for keeping everything in one piece for easier clean up. Denise has got some serious stones to be going the fast on a pushbike, I hope her record stands for a long time.

ugh, that paramedic one-liner is the “joke” everyone’s weird uncle tells every year, thinking nobody has every heard it before.

Yup. As a paramedic I found that leathers helped motorcyclists retain skin.

She crushed it and that’s awesome.

that chainstay length is so 2010 bro

I run the BodyFloat posts on my hardtails to keep my bad back happy, and they’ve been absolutely awesome. Cool to see one on her bike.

the craziest part to me is she did it with speedplay pedals. i get the socal connection, but yeeesh.