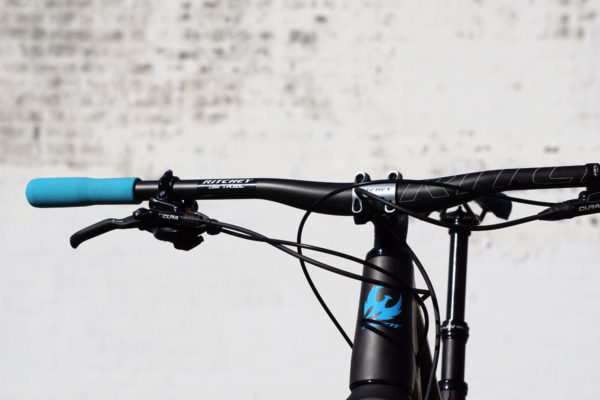 This year’s Project XC Race Bike started off with a Pivot LES and Lauf TR Boost fork, added a mostly SRAM Eagle DUB drivetrain, and stopped for a sec with Formula Cura brakes. Now, it’s time to outline the cockpit, which sees a wide variety of brands providing control of this machine. Here’s the what and why of this bike’s command center… 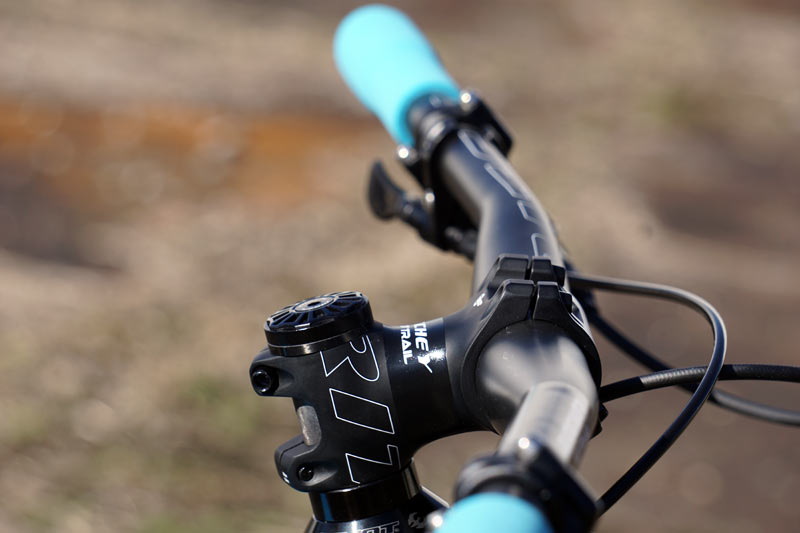 When I raced the Trans-Sylvania Epic in 2013, I pulled in a Ritchey WCS Trail bar, stem and seatpost for test. It was light, strong, and had designed in just enough handlebar flex to help take the edge off the hardest hits. That’s important when you’re riding for hours a day for a week straight. And I’ve been riding that same group ever since, problem free for almost five years.

But times have changed, and the definition of “Trail” has evolved. Ritchey’s 2018 WCS Trail parts now use the 35mm clamp diameter, and the bars have grown to 800mm wide (longer than when they launched in 2014 at 760mm). The stems, however, have gotten shorter, offered only in 45mm and 60mm lengths. Being a larger, heavier rider and without the aid of (much) suspension or huge tires, I wanted a strong but gentle cockpit for this build – and on paper, the 2018 Ritchey WCS Trail parts deliver just that. 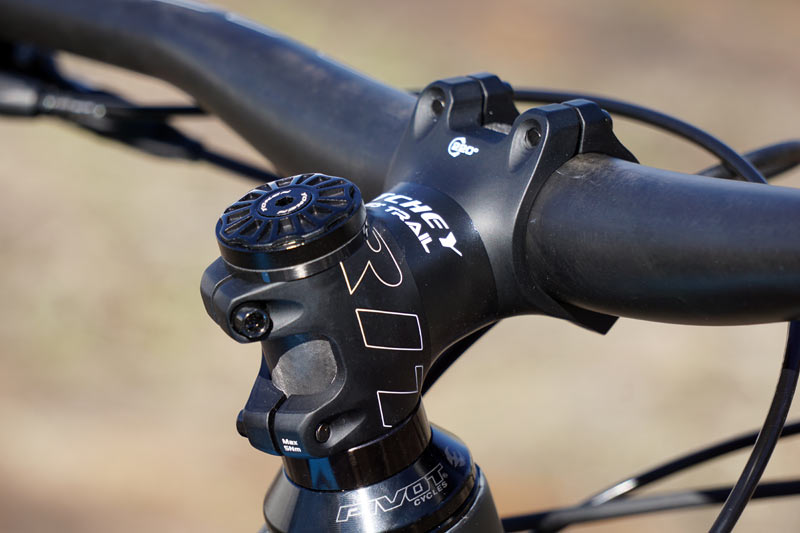 The bar has a 15mm rise and 9º backsweep. The stems are 3D forged 2014 alloy with their C220 opening, which means the faceplate is biased to angles giving the clamp section a 220º opening. The rear has offset clamps, same as before, which distributes the clamping pressure more evenly on the steerer tube. 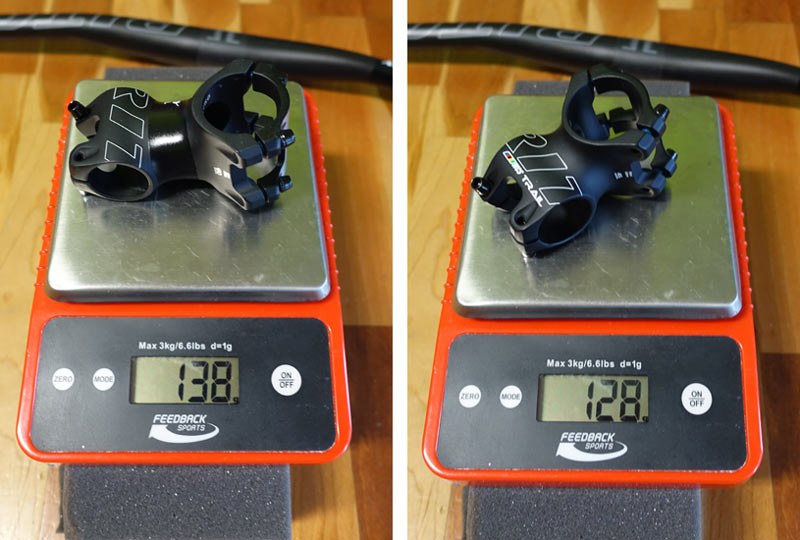 Actual weights are 210g for the handlebar, exactly matching Ritchey’s claimed weight, and 138g (60mm) and 128g (45mm) for the stems. The bike is built with the 60mm option since it’s an XC build, not a gravity bike. 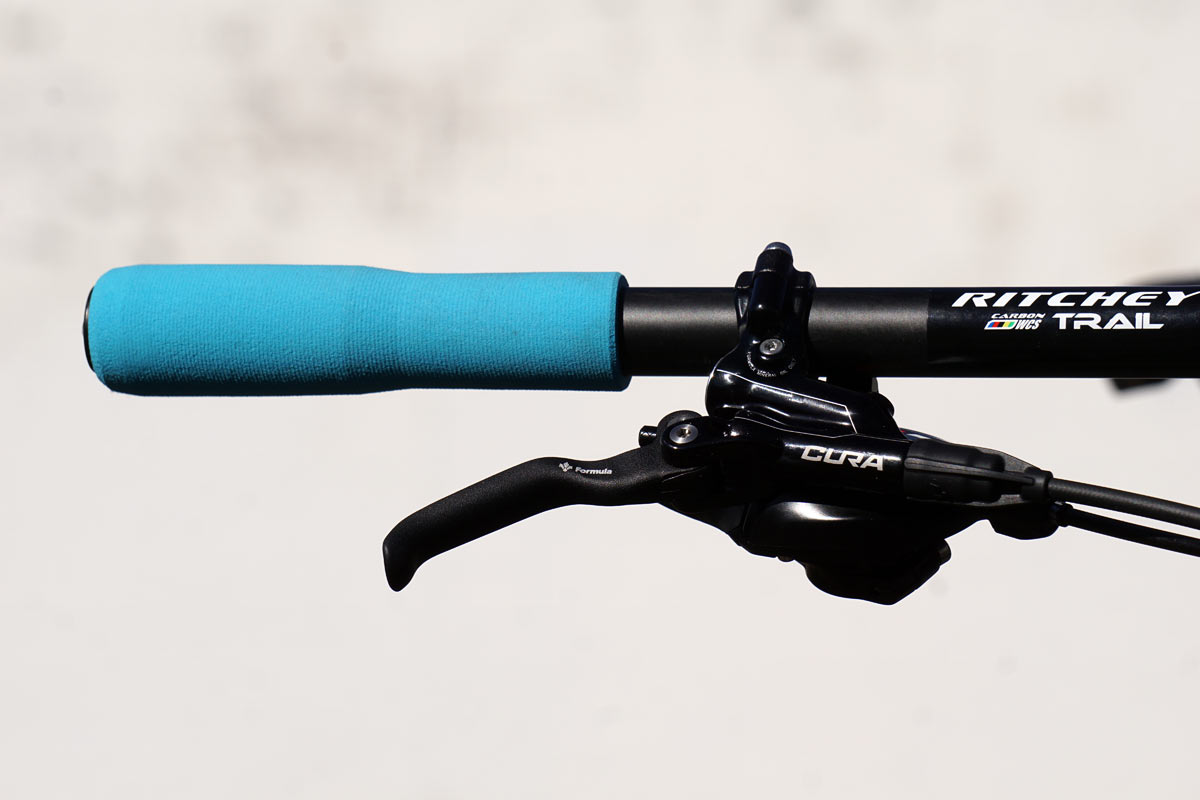 Introduced at Interbike, the new ESI Fit SG foam grips have a tapered thin part inboard with more cushion for the palms on the outside. Being new and light, I figured I’d give them a shot since they promised both padding and easy reach and control. And they came in a perfectly matching light blue!

Actual weight for the pair is 64g with bar end plugs. 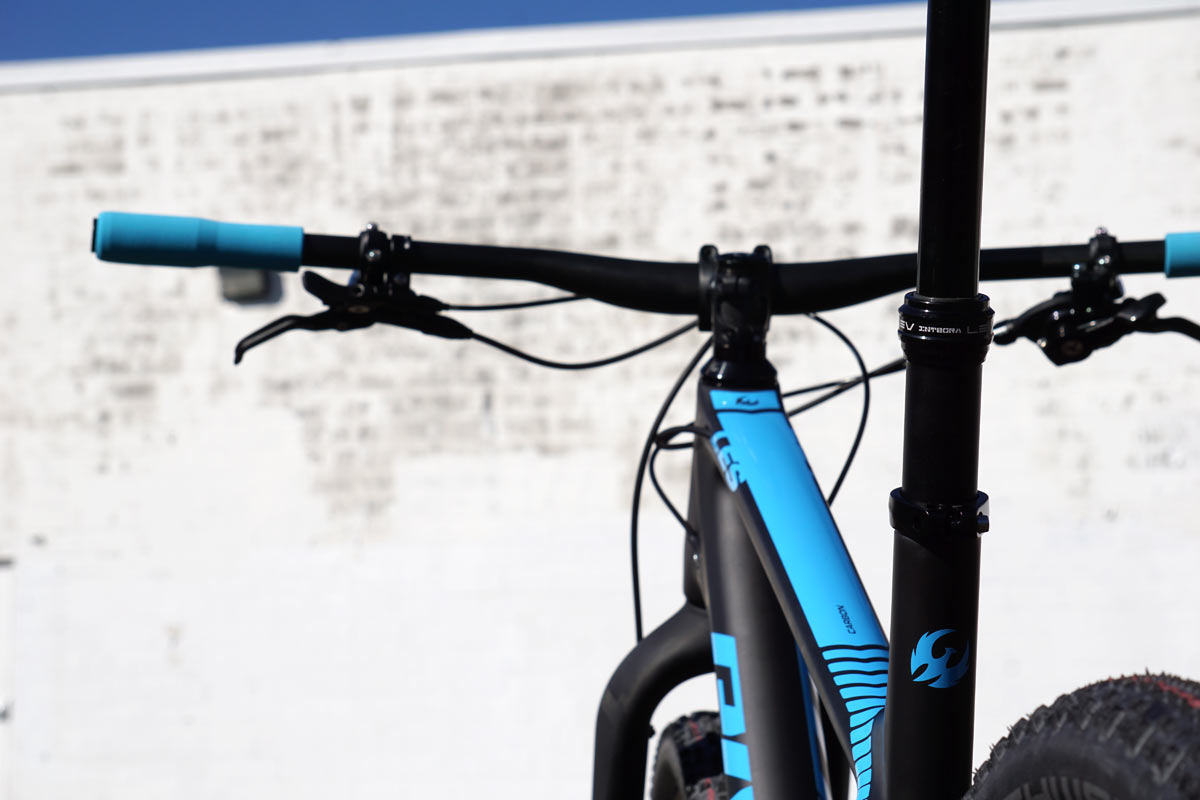 I’ve been meaning to test a KS Suspension dropper post for a while, and this seemed like the perfect opportunity to go with the brand making one of the lightest dropper posts on the market. Their LEV Ci has a carbon shaft, and it comes in shorter travel options, which is good for XC builds. Initially, I had simply requested any of their short travel droppers, but the offer of the carbon one was made, so I just asked for a short travel size but warned that it needed to be long enough to end up with a 31.8″ measurement from center of BB to top of saddle. Unfortunately their 65mm and 100mm droppers were not long enough, which was only discovered once I started building the bike. More on that in a minute. 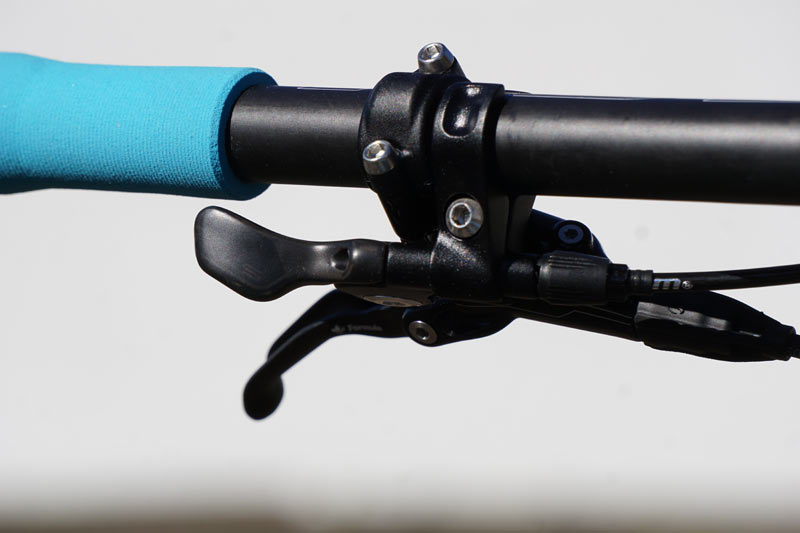 The good news is all of their internally routed mechanical droppers use the same system, so once I ran the cabled remote through the frame, I could just swap to another KS post. As luck would have it, I had a longer 150mm travel LEV sitting around that I’d pulled out of a Niner in order to review the new Reverb. So, the end result is that a) I learned I should always be very specific with any component requests that are critical to bike fit, and b) the bike is a little heavier than it could have been.

Another thing I figured out is that you need to order the longer titanium screws from KS if you want to run a carbon-railed seatpost with oblong 7x9mm rails. The stock bolts are sized just long enough to handle round rails. So, I also had to make a last minute saddle swap decision. 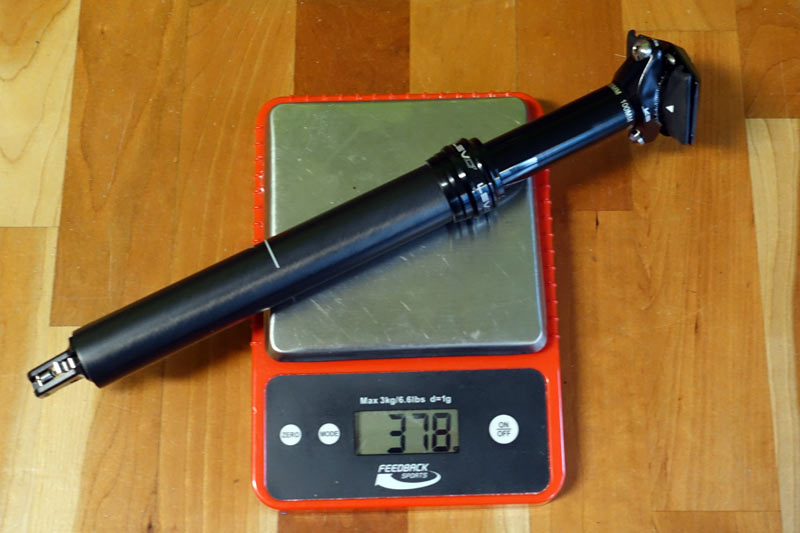 The 30.9 100mm carbon LEV Ci weighed in at 378g and comes in at 390mm long. Interestingly, the 65mm travel version in this diameter is longer and would have worked. The longer 150mm LEV was 460g. Their 1x remote uses a large thumb shifter-style paddle and is very ergonomic. That weighs in at 41g, and their standard cable and housing is 59g, of which I actually needed to replace with a longer piece of housing to get enough length inside the XL Pivot LES. 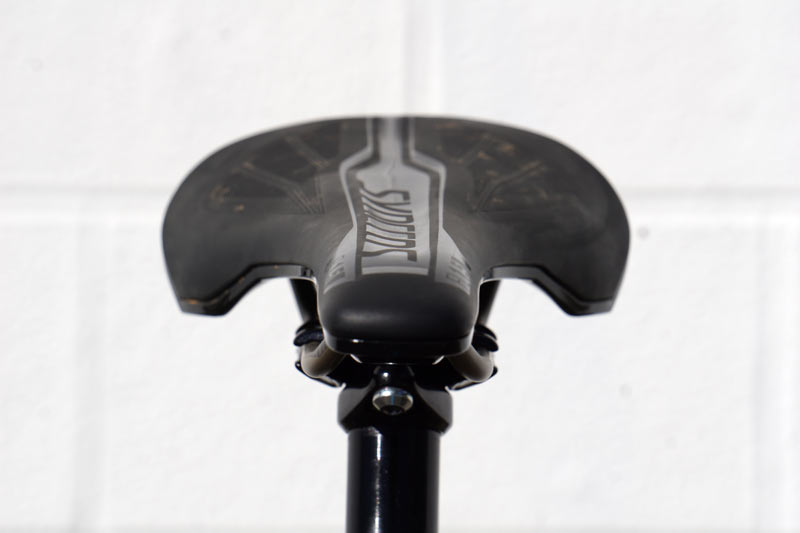 Many years ago I rode a carbon-railed Syncros FL saddle and loved it. They’ve changed up the designs in recent years, and make some quite narrow options. These showed up in the post one day, and while I originally tried this MTB version on a longer travel “enduro” bike, it’s really more of an XC race saddle in shape and size. 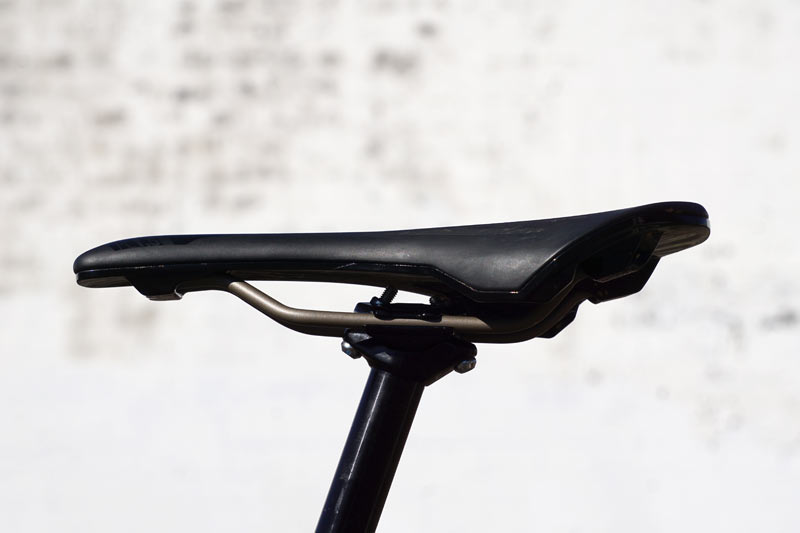 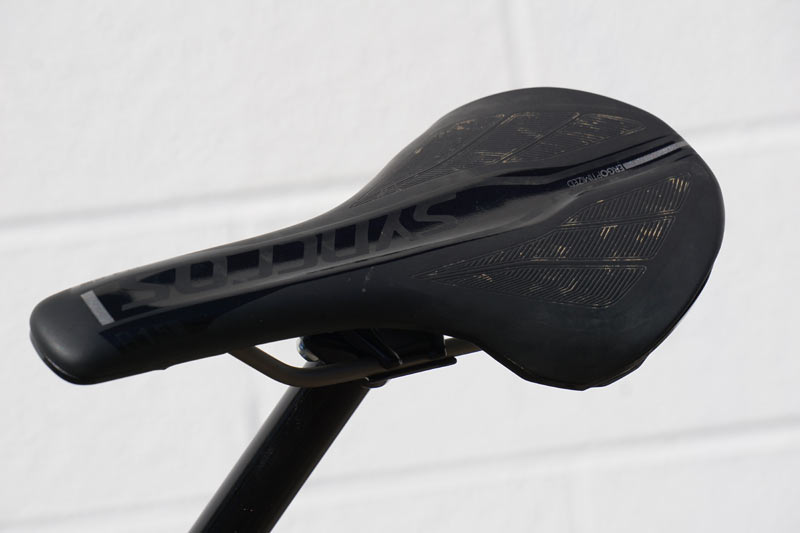 The cover has just enough texture to keep you from sliding around, but still allows micro adjustments or easy sliding-off-the-back motions. And I’m hoping that subtle center recess will keep my parts feeling fresh all day. Or at least feeling. 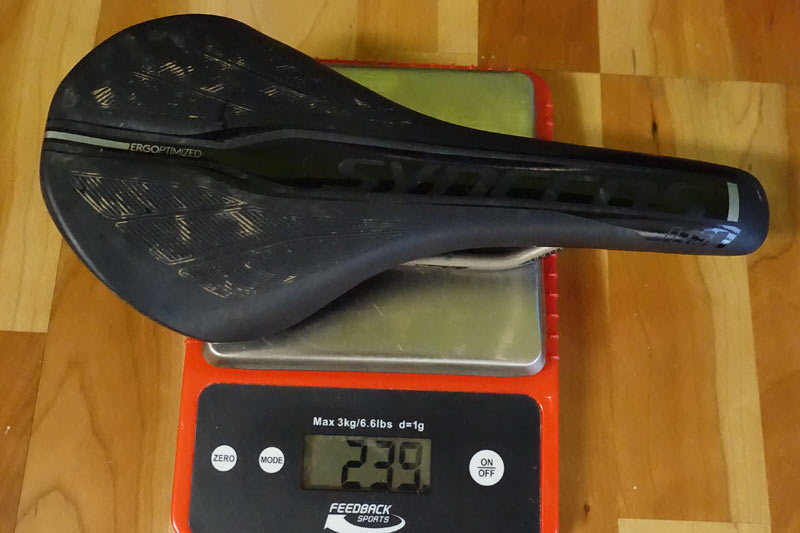 Actual weight is 239g (4g heavier than claimed, but also just a little dirty) with titanium rails and an carbon-reinforced nylon shell. This is the narrow option, measuring 275×132, and they have a wide version that’s 143mm at the widest. Check it and tons more saddles out at Syncros.com.

Here’s the rest of the build: