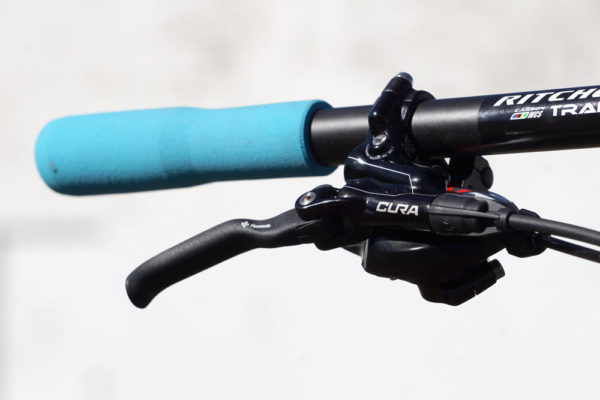 So far I’ve introduced the frame, fork and drivetrain for my True Grit Epic project XC race bike. Now for the brakes. The Formula Cura mountain bike brake is, in their words, the only 2-piston brake to be used in pro World Cup downhill bike races. They say it’s light enough for winning marathon race bikes, but strong enough for DH. And that it was made with a single goal in mind – stopping bikes.

So while they do have a Cura 4-piston model in development for release later this year, I felt the existing Cura 2 was more than enough for an XC race bike. After all, their website bills them as “Enduro / All Mountain” brakes. And, it was a chance to test something other than the usual. The Cura marked a big change for Formula when it debuted in 2016. The master cylinder and lever design became more streamlined and moved the pivot point to allow for straighter lever blades. And it switched from DOT to Mineral Oil, offering a more environmentally friendly service procedure. 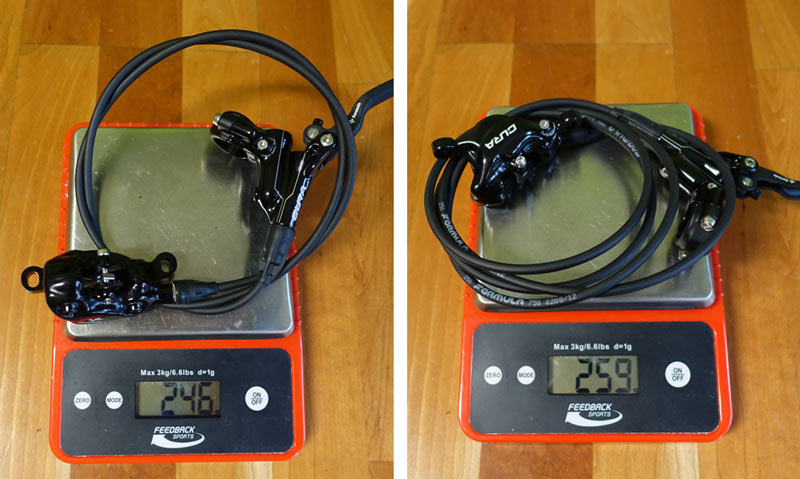 The brakes ship with 100cm (front) and 165cm (rear) hose lengths. Without mounting hardware, they weigh in at 246g and 259g respectively. The hose material is a textured, rubbery material that I can only describe as feeling “matte”. It’s not grabby, but not slick. Just matte. 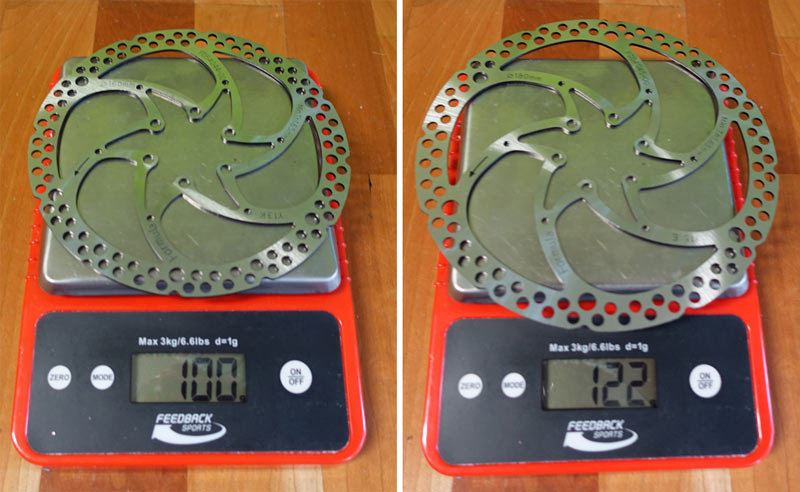 Other included or optional bits are (from left to right):

Add up what you need for your own particular bike to get the total weight. I ended up using the DT Swiss Centerlock Adapters that came with the ENVE wheels, and the Matchmaker mounts: 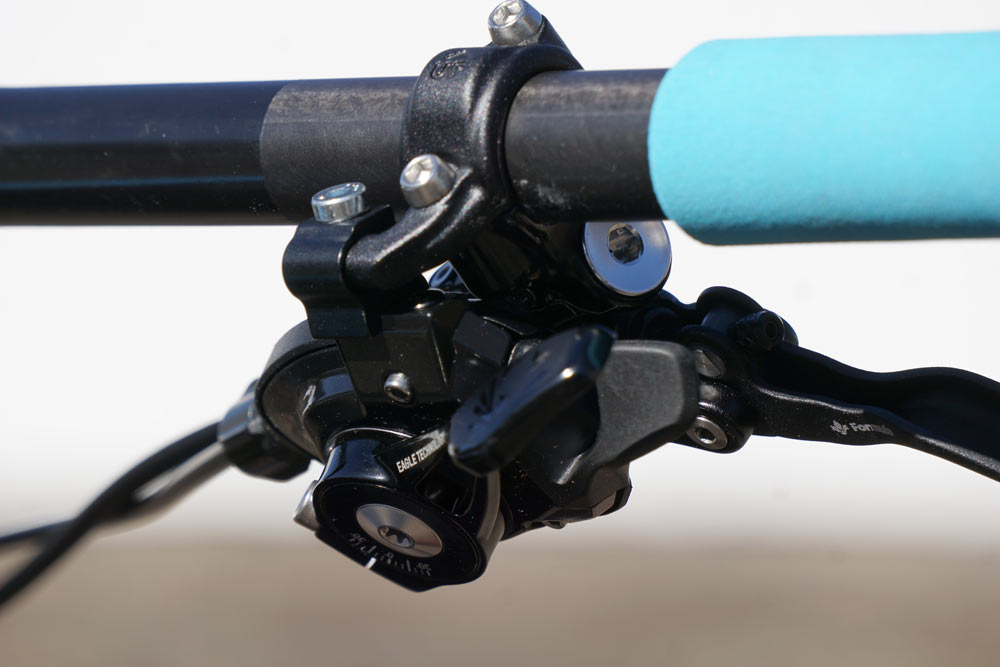 The Formula Cura-to-SRAM Matchmaker shifter mounts are an elegantly simple solution. It’s simply a replacement rear clamp section for the brake lever with an extension that’s nothing more than a round bar. A small sleeve slides over that, and the bolt that goes through it to attach the shifter pod also tightens it into place. The bolt nests into a small indent, so it can’t slide off, but it allows you to rotate the shifter’s position to find the best position for you. It comes with left and right facing options, so you can set the shifter inboard or outboard of the brake lever clamp (meaning, further or closer to the grip. I chose further because I don’t like my thumb banging against the triggers). 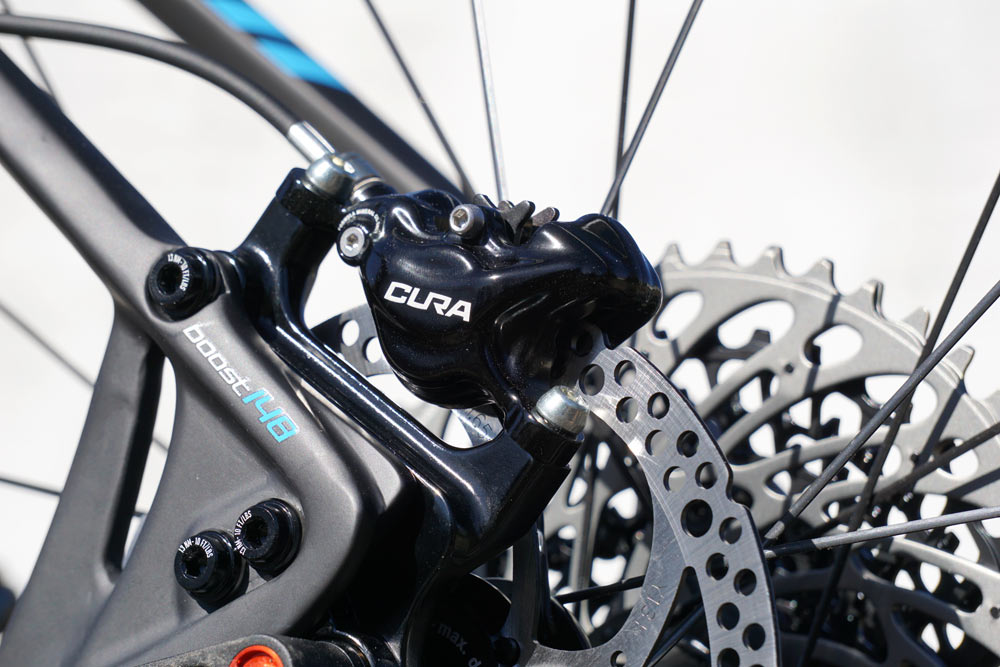 The caliper uses top-mounted pads for quick changes. Inside, it routes the fluid around the the back, past the outboard piston, then to the bleed port. The fluid is moving 24mm pistons, pushing organic pads. 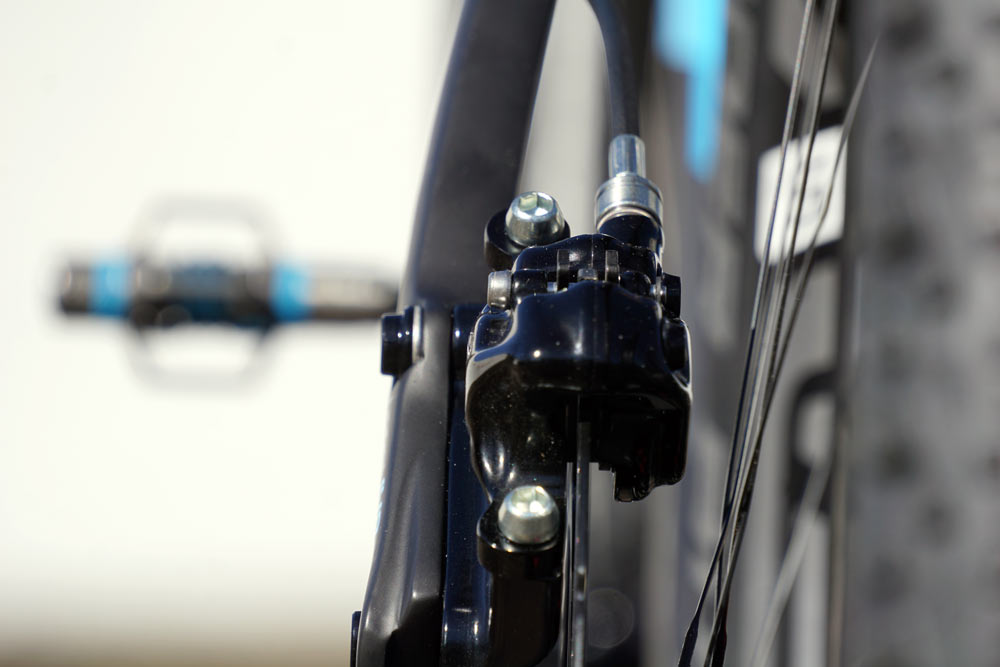 Shown here without the rubber protective cover in place, the hose uses their Speed Connect quick disconnect system designed to prevent accidental openings. You need to slide a small spring up and over the sleeve, then press it down. The idea is to make internal brake routing quick and easy, assuming two things: One, that it’ll fit into the ports (it wouldn’t pass through the front brake port on the LES), and Two, that you don’t need to shorten the housing and bleed it anyway. They say you can get several dis/reconnects from it without introducing air into the system or requiring a bleed. 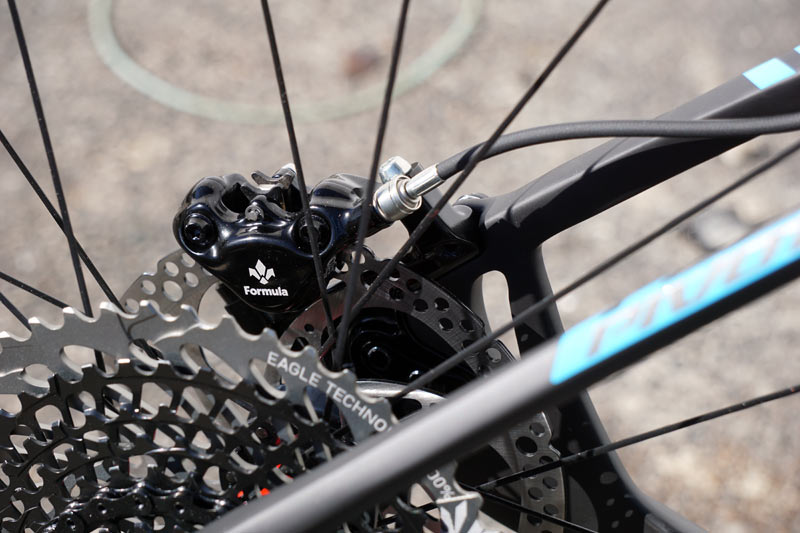 For my install, I did need to shorten the hose, and Formula provided the extra barb and small parts, plus a bottle of their mineral oil. Their service videos show only needing to attach a syringe to the master cylinder to top it off and remove air after shortening the hose. I did this, and immediately upon removing the syringe, fluid wants to come out…which isn’t the case with SRAM brakes that I’ve bled. I tried several times, and every time, fluid would come out. So, the best I could do was to replace the screw as quickly as possible.

The front brake hose was left untouched, and that one feels much firmer. The rear brake works, easily able to lock up the rear wheel, but feels much softer and has more lever travel. I’m confident in the braking power, but it would be nice to recreate the more solid, direct feeling of the front after bleeding it. After the race, I’ll perform a full bleed with syringes at both ends and see if that makes the difference. I’ve also reached out to Formula for their thoughts and will report back.

In the meantime, I can attest to the impressive performance of the prototype Cura 4 piston brakes I rode in very wet, very muddy conditions in Italy earlier this year. They stopped predictably despite the slop, were quiet, and easy to modulate. Expectations are high for the 2-piston Cura brakes during the race. Check them out at RideFormula.com.

Here’s the rest of the build:

What is weird, their nearly decade old R1 brakes are at 170-ish grams for lever+caliper. Is mineral oil hardware heavier? Or did they just not bother to make it as light?

Now how long will it take for SRAM to admit their mistake and drop the nasty DOT fluid?

It took SRAM about 20 years to drop their avid brakes and every other brake they made before admitting the mistakes and coming to market with the Guides.

I am sure for enough money someone on the DH WC circuit would run V-Brakes. So that does not instill any confidence in their product.

Also, are their brakes winning DH races or just not killing the rider on the way down?

These are killer brakes, lighter and stronger than xtr trail. And cheaper.

Few people I know have upgraded from sram guide (great brake but not reliable) to cura.

I like the same lever design for F and R.
If you scratch the top of a lever, in 1 minute you can swap it with the other side and flip it upside down. New lever. Or if you have a rental bike but run the brakes the other way around. The quick connect is nice feature when traveling too.