Quintana Roo announced the PRsix2, an update to their top-end PRsix triathlon bike. Key updates include an increase in stiffness, a decrease in weight, along with more integration and a T47 bottom bracket shell. QR also continues to pursue consumer-direct sales, with near-fully-assembled bikes fit in to their ProBox for delivery. At first glance, the new bike looks quite similar to the original, which came out in 2014. They have since added disc brakes and lower price points, but the overall DNA remains the same – targeting the fastest frame possible with consumer-desired features.

Perhaps the biggest change to the frame itself is a switch to an oversize threaded T47 bottom bracket, from the previous generation’s PF30 spec. The rear axle uses the E-thru standard of M12x1.5, 142mm length. QR notes that athletes using an indoor trainer should contact their manufacturer for an appropriate thru axle adapter, due to the volume of options in the marketplace. The results of the frame improvements? Quintana Roo claims an 11% increase in stiffness, along with a 10% reduction in weight. The PRsix2 carries over with a rear-mounted storage box, keeping spare tubes and tools tucked away neatly. 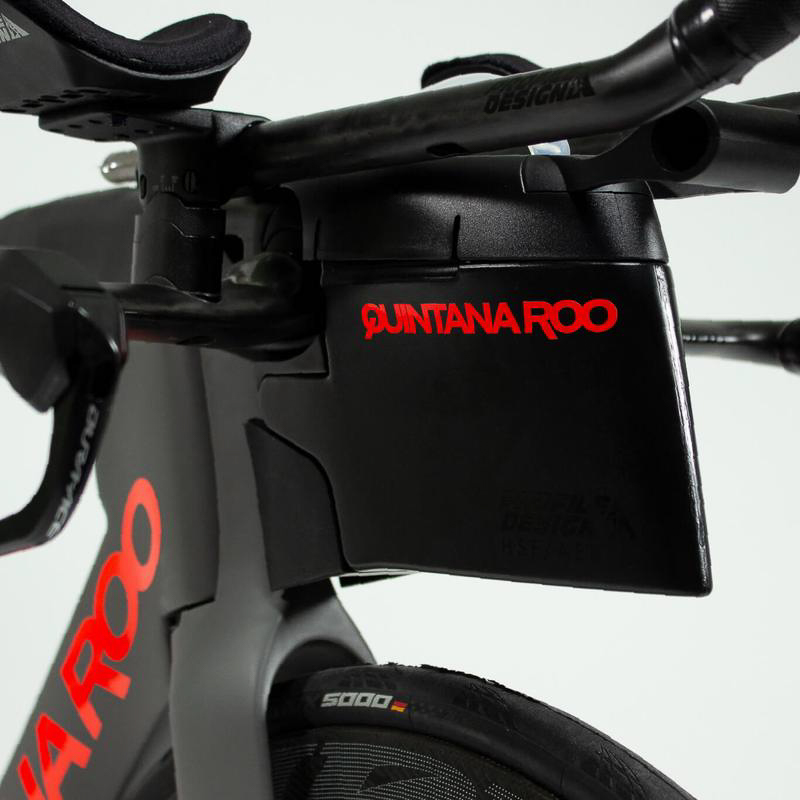 Triathletes can rejoice, because the PRsix2 has on-board hydration – a common desire among long-course athletes. Rather than opt for an in-frame solution, QR partnered with Profile-Design to make a proprietary front-end Aeria Hydration system. QR has not released the fluid capacity for this, but they noted that it’s specific to the PRsix2, and not backwards compatible to other models. Also, the 48cm frame is too small to be used with the front-end hydration system. The integration continues with a new Di2 port location and improved cable routing, for an uber-clean front end. The PRsix2 is available now, with pricing starting at $8,500. The price includes a lifetime frame warranty for the original owner, plus a one-year warranty for forks, bars, stems, paint, and seat posts.

I designed a bike from cardboard when I was a kid that looked just like this…..

100% thought this was Bicycle Pubes artwork when I saw it. Still not convinced that it’s not BP

I entered the contest! I have no interest in the bike per se but I could sell it and buy a Pursuit LeadOut AR frameset and still have some $ left over to put towards a new furnace for my house.

I must have missed it in the headline and the press release…what’s the brand of that bike?

The capacity of the Profile Aria front bottle is 30oz.
I do like Di2 port placement.
Still, like too many bikes out there, by the time you get this dressed up with the optional carbon wheels the price is borderline nuts. 10K for a Ultegra Di2 bike is getting crazy for something I have to (still) pedal