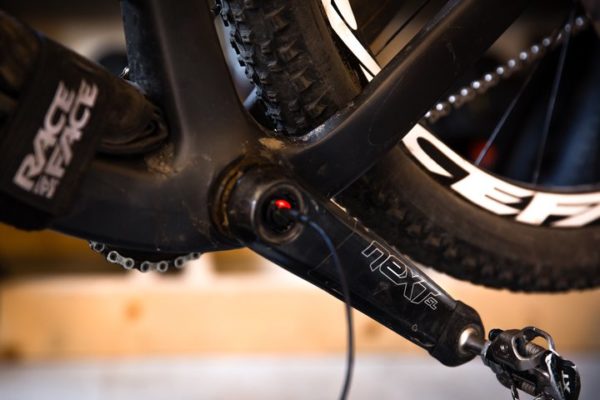 Ready to start training with power on the mountain bike? If so, Race Face just dropped a very enticing option. Initially launched back in April along with the Next R component group, the new Cinch Power Meter is finally available.

Compared to other power meters, the Cinch version has a few key advantages. For starters, since it’s completely enclosed in the spindle itself, the design is high versatile and works with almost all of the Race Face Cinch crank arms. As long as your bikes have the same spindle length, that means you could swap the power meter from one bike to another – one day using a 1x drive train, and the next a 2x. In this case you could either swap the crank from one bike to another with an 8mm allen wrench, or swap the spindle from one crankset to another using the included crank arm puller (since the power meter occupies the space normally reserved for the extracting bolt).

It also should prove to be pretty durable since there aren’t any bits to dangle from the crank, in the chainring, or on the pedals.

The versatility is key if you happen to be an all around shredder and fast guy like Evan Guthrie who needs power metrics on both his Pivot Les and his big bike.

between power meters and strava segments, the original spirit of mountain biking is officially dead.

Well these are for racers, don’t know what you expect

Waiting for Watain
Reply to  Tom

The “original spirit” of mtn biking included regular timed runs down Mt Tam. Seems very similar to what we now call Strava, minus the technology of course.

No one told you you need to use those things. No Garmin No Rules

unfortunately, I’m already seeing gunners show up on rides and completely blow things up because there’s a segment in the middle of nowhere.

basically, guys/gals who always drill it, and define the quality of the ride by how many KOMs they got, and how many people they dropped.

…so you’re upset because some people want to ride hard in the middle of nowhere? To me that seems perfectly reasonable and about the safest place to engage in such activity. Why is this a problem?

MTBing used to be more social. Go out with a group of people, do a nice ride and have some laughs along the way. Now, instead of racing, there are lot of people treating a ride like a time trial with a results sheet. I guess the same people who are logging the number of steps they take every day, the quality of their sleep, and how many times they had sex this week. Better living through data.

That’s what I like so much about RollOUT an app created to encourage social experiences.

Yeah, other people may buy a product that they want and you don’t, guess it’s time to quit the sport.

If I can avoid the likes of you chasing strava segment times and droning on about your power, I think I’ll be alright.

So this is left leg power only? They seem to have left this off their website.

Dave
Reply to  Tom in MN

Easton uses the same cinch system on their road/cross crank. Is there anyway to get the longer road spindle to work in a mountain application? (I’m not up on all my BB standards.)

Easton released the same power meter this past summer, not surprising as Chris Tutton runs both company’s.

I really wonder if the Race Face version is actually shipping since I ordered the Easton version in August and as of November it was still not available. The LBS contacted Easton monthly and was told numerous times there were “issues” and it would be “about 2 more weeks”. After hearing “about 2 more weeks” several times we finally cancelled the order in mid-November.

I like the concept of spindle based power particularly for gravel and mountain applications. Just hope they actually hit the street at some point.

Joey B
Reply to  jman

Hmmm. The Easton power meter has been available and shipping for some time now. The RF version is shipping as well but in limited numbers. I’ve been using the Easton version on a gravel bike for a few months now and nothing but good things to say about it. I expect the same results the RF version.

This will be a good option for the gravel & CX racers. Many of those bikes have crank/chainstay clearance issues that prevent left-arm types, like Stages.

Is the total price spindle + crankarms? More than $1000 for a left arm type powermeter? Seriously? I guess there is a market for everything …

Anyone else find that marketing video a bit strange? 2.5 minutes about a power meter and there’s like ten pedal strokes in the entire video. 95 % of the time he’s just shredding downhill without pedaling. For that type of riding a power meter is quite useless.

It make you wonder if you see power spikes when you hit bumps while coasting or land jumps and the spindle flexes?

How about a longer spindle for fat bikes?