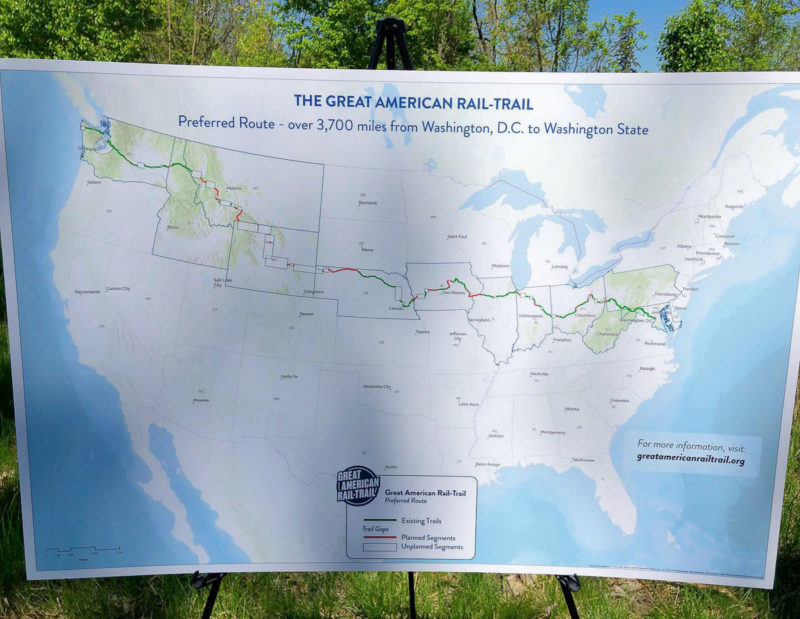 Two days ago, one of those strange coincidences in life occurred to me. While I was pedaling my way south from Cleveland to Cincinnati, somehow I just happened to pass through the on-trail celebration for Great American Rail-Trail announcement during my three day, 367 mile journey. That celebration was held in conjunction with many across the United States – each commemorating the big reveal of the coast-to-coast rail-trail route. 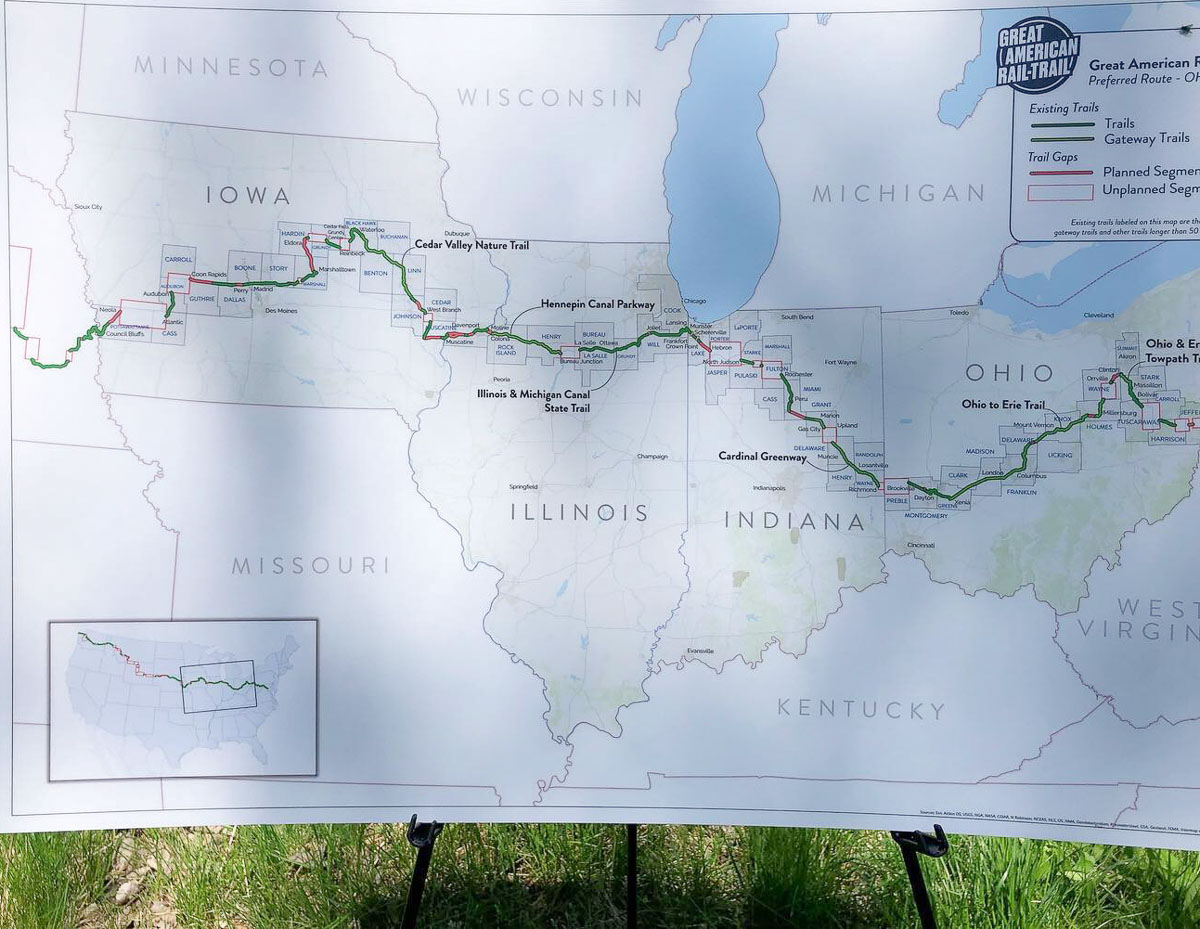 The reason for the event along the Camp Chase Trail in Columbus, OH, was that the Great American will be using a large part of the Ohio-To-Erie trail as it traverses the state of Ohio. 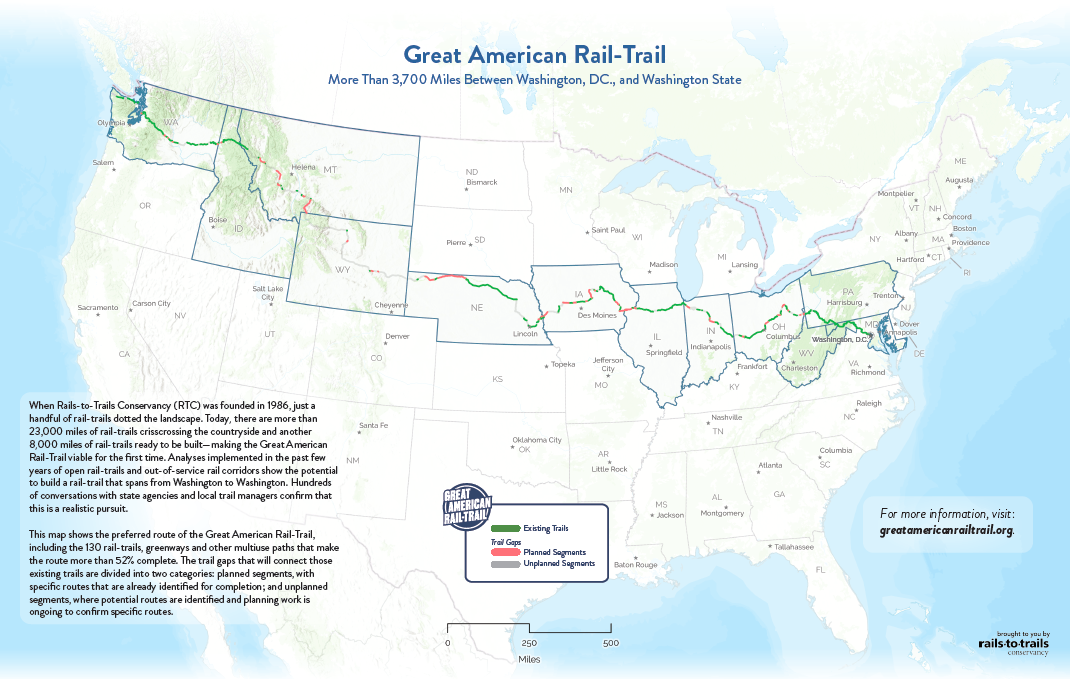 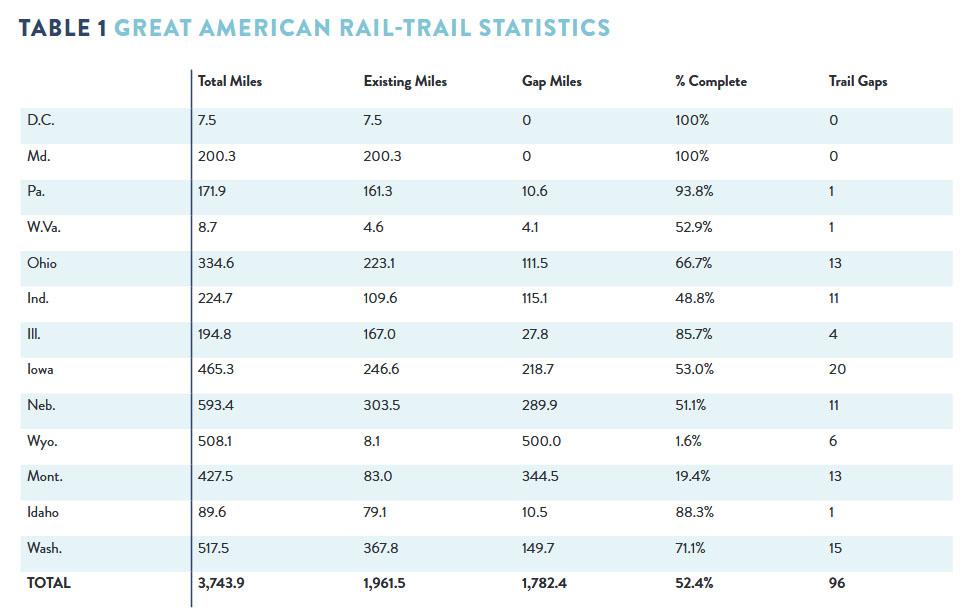 While it won’t likely be completed for many years, when it is complete the trail will travel through 12 states and the District of Columbia, covering a total of more than 3,700 miles. Currently, about 1,900 miles of trail are already built with another 1,700 miles of trail gaps which will need to be filled to complete the route. However, you could technically ride the entire route right now by riding on the roads through the gaps for a coast-coast ride that would be around 50% rail-trail.

Like the Ohio to Erie trail, the existence of such routes offer a unique option for cyclists of almost any ability to dip their toes into the world of bicycle touring or bikepacking – without having to worry about vehicle traffic nearly as much as you would if it was all open roads. But the trails also offer the ability for those who live nearby to walk, run, ride, and use the trail in any number of ways for shorter trips as well (Rails to Trails estimates that there will be 50 million people living within 50 miles of the route when completed).

We’ll give this a few years to get more complete, and then maybe we’ll have to ride the full route ourselves…

Wyoming has a bit of work to be done but it does have more than Washington DC so there’s that.

Pretty cool once it’s finally finished. Do they have an assessment of the state of the existing trails? In Metro Detroit, we have the I-275 bike path which was built back in the 70’s? Until about 5 years ago, some sections were nearly unrideable due to lack of maintenance. Fortunately more money has been put into the system and its a great asset to have about.

Yes, there is a pretty detailed assessment state-by-state here.

This will be pretty neat when it is all done. I’m hoping to ride the Palouse to Cascades trail in Washington sometime in the next year or so.

Elroy – Sparta is not near…well, anything…..

As to the rest of it. Shameful that my hard earned tax dollars are being spent on a bike path that is not essentially need for most folks in the United States…while we have thousands of homeless US Veterans and so many other infrastructure projects. I get the desire for cyclists to have the mind set of ‘more for me’, but at the same time the tax base is supposed to be for ‘the greater good’ (and that is a violation of original tax laws that were designed to fund only protections and military type costs).

If you think that the slow trickle of rails being converted to bike paths is the big thing draining resources away from “more deserving” problems like veteran homeless and other infrastructure projects, then your perspective is way off. Simply because your average pedestrian path doesn’t serve the wide majority of people doesn’t mean they aren’t serving a great use. How many taxpayer-funded county or country public roads are built (at an exponentially higher cost per mile) that only serve 2 or 3 people? Each state has thousands of miles of those empty, desolate roads. “But that’s a road, so it’s important!”

And what criminals are using these paths as their primary mode of transit? You know, I would venture to guess that criminals also use roads, boats, planes, trains, as well…

I don’t understand why this is something that you feel is a waste of resources when there are so. many. more. wasteful government programs and initiatives happening at all times that are way, way more costly. Nevermind the fact that property value tend to rise near bike/pedestrian paths.

Have you not seen the MANY stories of crime on the trails? Chicago has trails no one in their right mind brings a good bike to…same for Milwaukee, Orlando, Denver and on and on.

This is not a debate site…there are many other options for that. As a cyclist however, the rails to trails is only good in theory (talk about boring rides). Almost as silly as the city I live in with bike lanes as a second lane on a four lane road…ending at a T intersection to no where. So, more wasted tax dollars…

Roadstain, do you have links supporting your claim of the “many instances of crime on the trails” in the Chicago, Milwaukee, Orlando and Denver areas?

Chicago? Awe, heck, both guns and drugs are illegal in Chicago so I cant defend that city 😉

Funny thing, where we ride mountain bikes I would be at least 20% if not more are armed with their small hand guns. “For bears and snakes”….uh huh….

1) Avoid bike paths because of crime? I can’t speak for other cities, but where Denver is concerned this is nonsense. Sounds like a Fox News headline.
2) I agree bike paths are a snooze to ride, but if you live in an urban area it’s still far better than riding a trainer.
3) The real upside of urban paths is for getting around the city safely without using a car. When coupled with Denver’s public transportation system (which is also excellent), paths help get you the “last mile” to/from terminals safely. It’s as legitimate a piece of public infrastructure as anything.

In Chicago bikes are not all all part of the public transit plans. While you can put a bike on the front carrier of the many buses (and some trains) there is often very limited and or no capacity for the number of bikes.

Burnham Harbor (where we spent many weekends) it was not at all uncommon to hear stories about people shoved off of bikes by thieves (who leave with the bike).

Denver is a great city for public transportation by all accounts…they are not dealing with the aging infrastructure of the cities further west (as they tend to be older cities). Looking at the map, this new trail interconnect will avoid most places that most folks want to ‘go to’, thus more than a transit pathway it would be more IMO like folks who want to hike the Appalachian Trail in segments over years.

But, I stick to my mantra of not wasting my tax dollars on this and so many other special interest programs. I do not expect “the man” to fund my special interest cause anymore than some other cause I could care less about.

1) Rails to Trails is a non-profit, not a government program. The amount of federal grant money they receive is tiny in the overall spending picture. The military wastes more money every month than RtT has ever received.
2) It is ignorant or misleading or both to compare crime happening on bike paths in urban centers to Rail Trails that are often many miles from populated areas. That’s like saying “why are we building parks in my small town, there are crimes in Central Park all the time”.

Your arguments make no sense, you are uninformed and counterproductive.

No such thing as our very well prepared, and well equipped military “wasting” money. Thankfully, they are currently only getting stronger and stronger.

Now, tax dollars on a trail for a few cyclists? That is a waste of money.

Mmmm hmmm. But a fleet of $2 billion stealth bombers that can’t fly in the rain and have never been needed makes a lot more sense than giving citizens a safe way to travel without a car. Thanks for your anti-bike-lane tirade on a bike website.

Seriously, you are going to troll my post about the Elroy-Sparta trail which my father a former marine helped build with our church group? You really need to find another site to go fishing for controversy. There is too much evidence on government waste for the military that pales in comparison to grants for public works or obviously you do not read Military Times.
https://www.militarytimes.com/news/your-military/2019/03/12/use-it-or-lose-it-dod-dropped-46-million-on-crab-and-lobster-and-9000-on-a-chair-in-last-minute-spending-spree/

So happy you completed the ride. Three days is impressive ! It was great riding with you and hope to see you on the trail in the future.