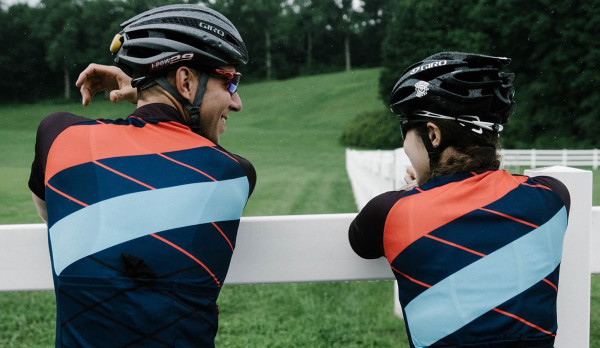 We got a preview of the new 2015 Cross Collection from Rapha at Eurobike, and they’ve now released full details on the entire range. Following up on last fall when they introduced a pair of carbon-soled off-road shoes and a special long sleeve cross edition of their lightweight merino jersey in the Super Cross line, this year they’ve followed the same concept with long-sleeve editions of a couple of their popular summer kits. For the first time this year Rapha made a women-specific cross jersey, based on the Souplesse, as well as the first cross skinsuit available to the public, based on their Pro Team Aerosuit.

Read on past the break for detail photos and pricing on the new kit, and to get a better look at the 2015 Super Cross look… 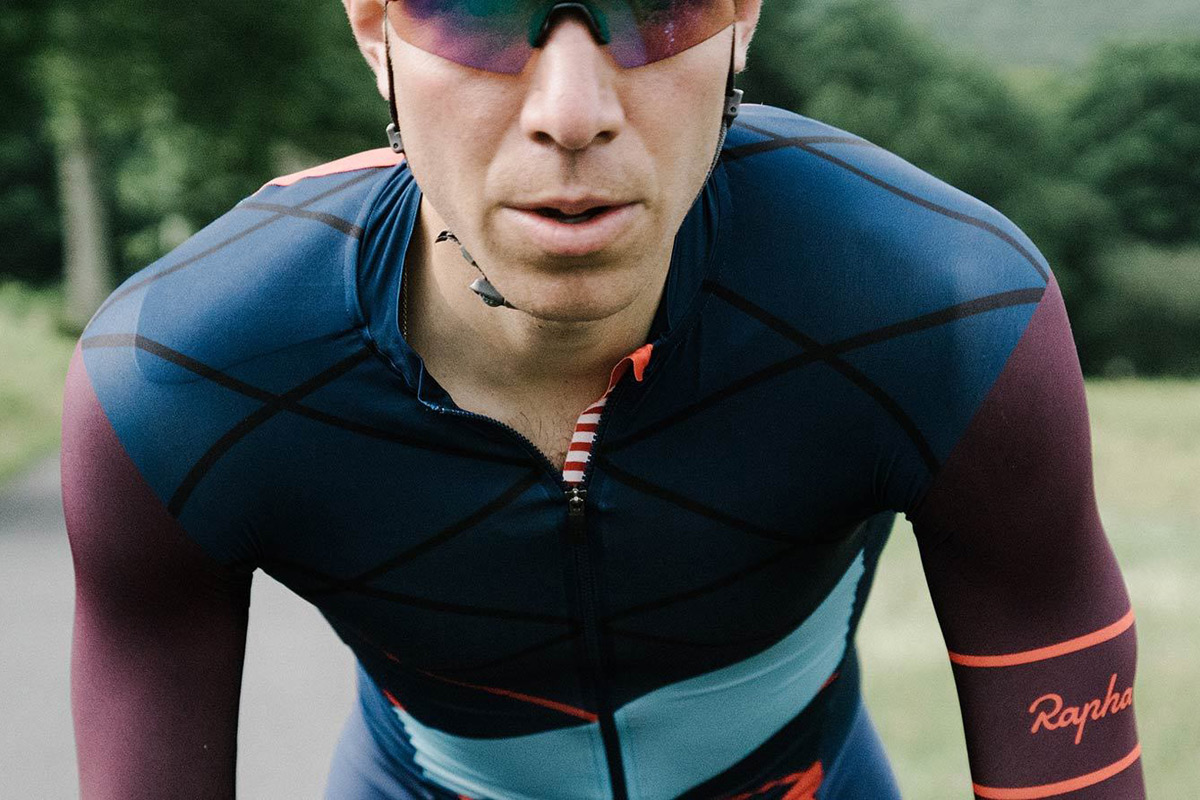 The 2015 Super Cross livery is less pink than in years past, but continues in a similar blue and red palette, this time being dominated by dark blues and purple/maroon (Rapha calls it medieval blue and fig, yikes.) The color similarity year-to-year may help to justify the high price of the key pieces of kit, since they will probably still mesh with each other for at least a few more seasons. 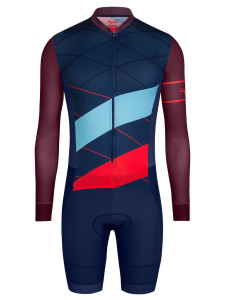 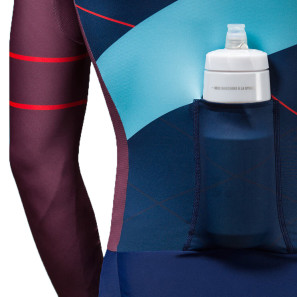 The new skinsuit is an almost-long sleeve version of Rapha’s standard Pro Team Aerosuit with what they call 3/4 sleeves that look like they’ll finish about 10cm/4″ above the wrist. The thought behind that being that it will keep the elbow and upper arms from getting cold and windburned, but will allow more cooling from the hands and wrists during intense cross efforts. The Long Sleeve Aerosuit sells for 230£/295€/$340, the same as the short-sleeved version, and actually about 25% cheaper than buying a pair of Pro Team Bibs and an Aero Jersey separately, on which they are both based.

The skinsuit also gets doubled up reinforced shoulders to stand up to carrying a bike, and has a single rear pocket in the back that sits flat when empty, but can accommodate a bottle for warmups. The top is essentially sewn to the shorts on the sides and back, but leaves an overlapped opening/flap at the front where the two come together that makes bathroom breaks possible (for the guys.) 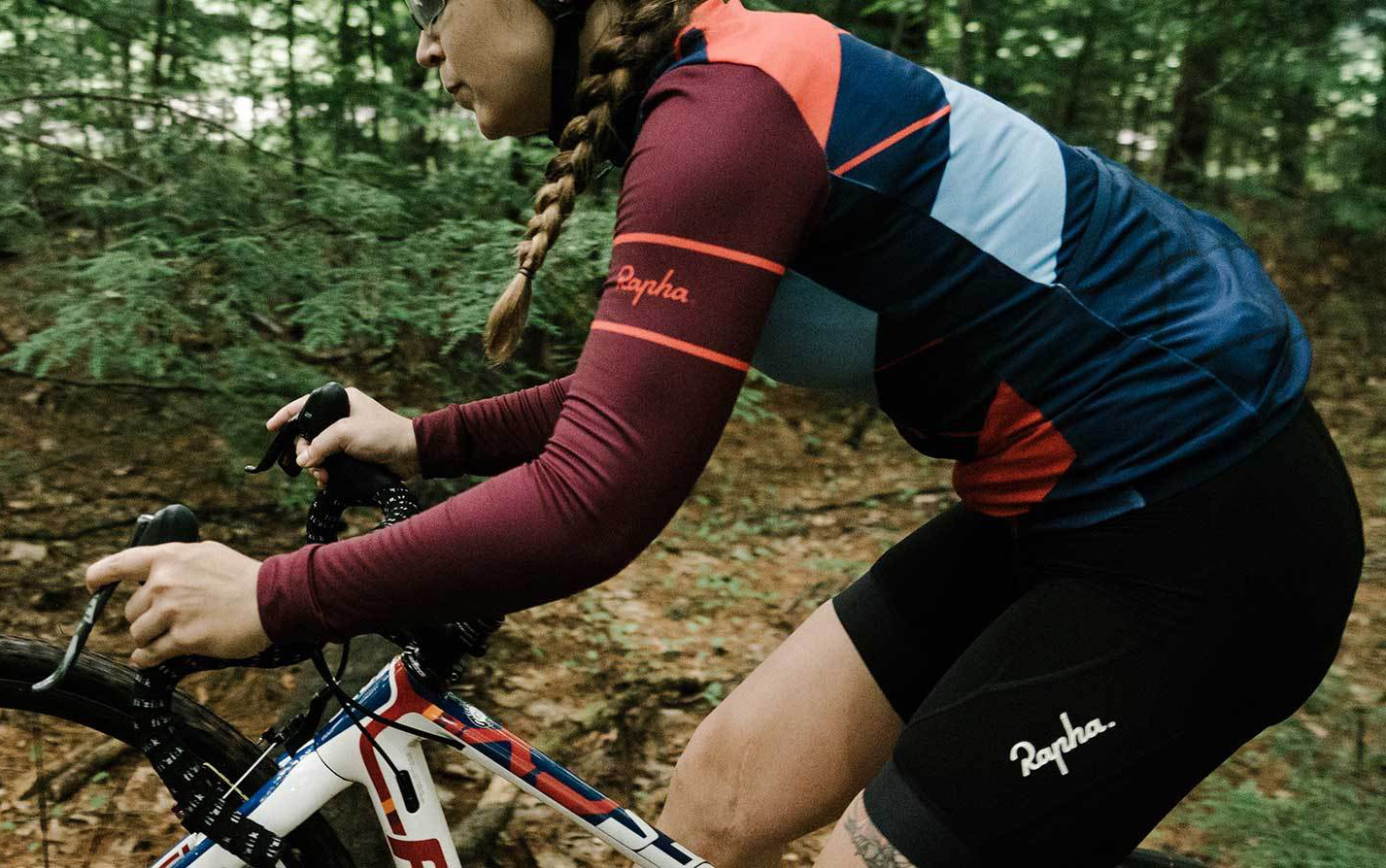 Women get the new proper long sleeve jersey, based on the Souplesse jersey with the same Super Cross design. Being the first cross jersey for women, it borrows heavily from the fit and finish of the Souplesse line, Rapha’s women-specific take on their top Pro Team line, with a slightly heavier fabric. With cyclocross in mind it gets a doubled-up, reinforced right shoulder for bike portaging. 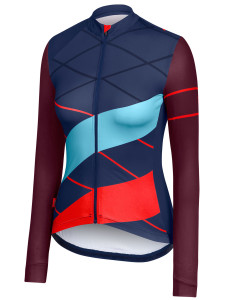 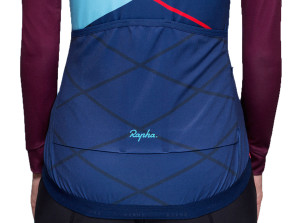 The women’s jersey gets a narrow center pocket, a pump sleeve, angled side pockets for easier access, and a small zip pocket; all reinforced to stand up to rough and tumble racing and hold their contents securely. Its close, stretchy fit also gets longer cuffs for a better coverage across the wrists or to overlap with gloves when the mercury drops. The women’s Long Sleeve Souplesse Jersey sells for 130£/170€/$195. 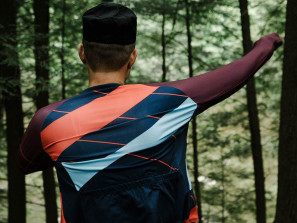 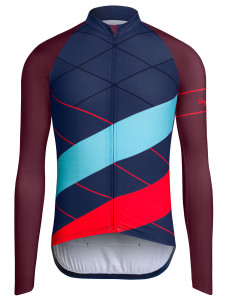 The men’s version – the Long Sleeve Pro Team Jersey – sells for the same price, and while it looks pretty similar has quite a few different features. It is based on the analogous Pro Team jersey, but feels like a bit heavier fabric like the women’s version that are both described as mid-weight and breathable. The jersey was specifically updated to a more durable fabric this year, able to withstand weekly pinning on numbers and the occasional scrape and crash, something the open weave of the lightweight merino version last year couldn’t really handle. The men’s version gets raglan sleeves, and like the skin suit gets both shoulders reinforced for carrying the bike. Pockets are straight across the back with 3 main pockets, plus a small zippered one. 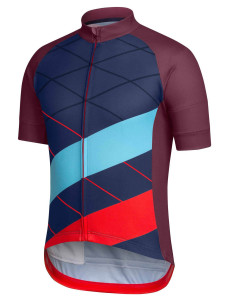 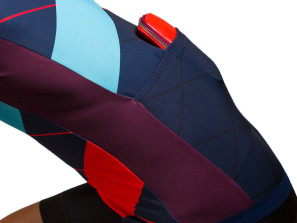 The 85£/110€/$125 Super Cross Jersey is essentially a simple all polyester replica of the Team and Long Sleeve versions. Rapha sees it as a more affordable version to race hard and put away wet, from the early warm races until the colder months when it gets paired with heavier baselayers and arm warmers. Apparently enough customers asked for a basic jersey that they wouldn’t mind destroying in cross that Rapha made one. It gets the standard 3+1 pocket layout, but no real-cross specific features beyond the graphics and the Super Cross logo on the right arm. 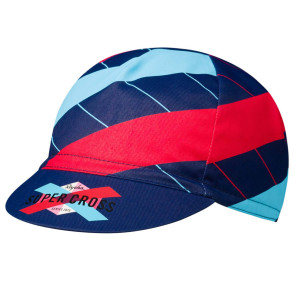 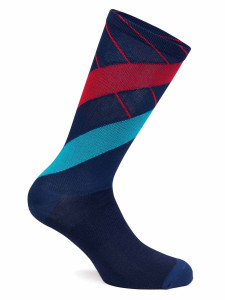 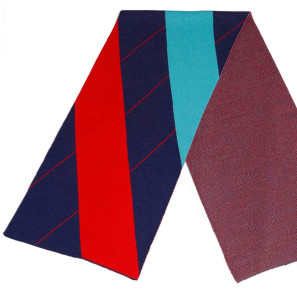 Rapha’s Super Cross series gets rounded out with a few small familiar items that offer a bit more affordability. The 5-panel cotton Cross Cap at 20£/25€/$30 is a mainstay of cyclocross and does a decent job of stopping some wind and managing sweat for those one hour intervals. The Cross version of the Pro Team Socks at 20£/25€/$30 are also nice for those early season, warmer races, but even in this extra long version they likely wouldn’t keep our toes warm through to the end of October racing. The 50£/65€/$75 Cross Merino Scarf is another story. It doesn’t come cheap, but makes an excellent addition to our cross warm-up kit to help make it through the winter. Wrap one around your neck on the start line before the gun goes off, in the pits while you are catching bikes for a friend or local pro, or on the podium to keep in the heat we just built up. Even getting a lot of use off the bike with its subtle look, it is probably the one Rapha item we get the most out of from our Europe HQ, outside of their excellent lightweight merino socks. A couple more pieces, like last year’s 250£/310€/$350 Cross shoes and a Super Cross T-shirt for 30£/40€/$50 round out the 2015 cyclocross lineup.

While some of those prices seem pretty crazy for cyclocross kit that will get totally abused through the cross season, there is something to be said for a warm merino scarf for the start line or spectating in the cold mud. And a lot of people rave about the Pro Team jerseys (my wife among them) so long sleeve version could be a great option, even for regular autumn/spring riding.  It’s also worth remembering Rapha’s free repair service if you are thinking about getting that speedy skinsuit. I can only hope that anyone who buys one, races it hard enough that it needs to get sent back at the end of the season to get stitched up after a good crash or two.