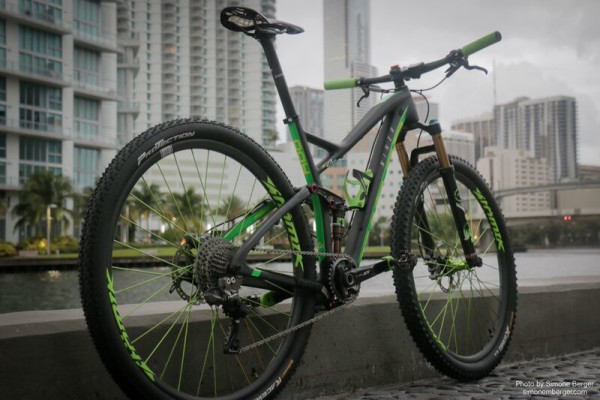 Never satisfied with the Di2 status quo, Julian DaSilva is back with a new creation that takes Di2 integration to the next level. Ok, he never really left, but he has found himself at the Racer’s Edge in Boca Raton, FL. As a high end, boutique shop that caters to racers, Julian’s skills with Di2 systems as well as his new SOS NRS 3D printed Di2 junction box mounts should be a hit… 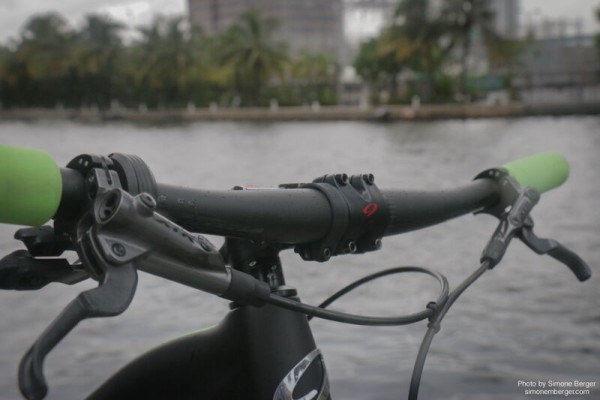 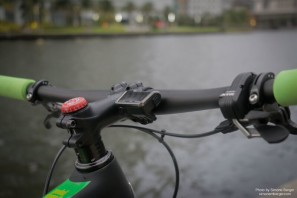 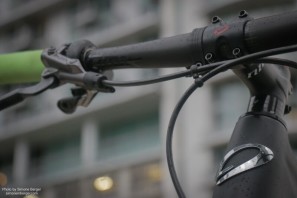 Unlike SRAM Red eTap, Di2 still uses wires which in most cases can be internally routed through the frame. But who wants a bunch of wires cluttering up the handlebar? While a few bars and stems offer off the shelf solutions for wire management, Julian wanted to create a custom set up with carbon bars from Atomik. The result is a super clean, minimalist bar set up. According to Julian, one of the trickiest parts of the set up was routing the wire while still using a standard stem and starnut. Wiring goes from the bar, to the stem, to the steerer, to the rest of the frame. 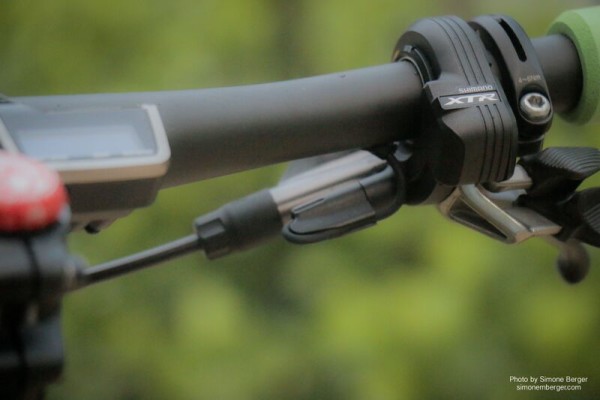 Just about the only wire visible at the bar is this small bit before it tucks into the carbon just in front of the shifter. Otherwise, the rest of the set up is fairly straight forward with the battery stashed in the seatpost. 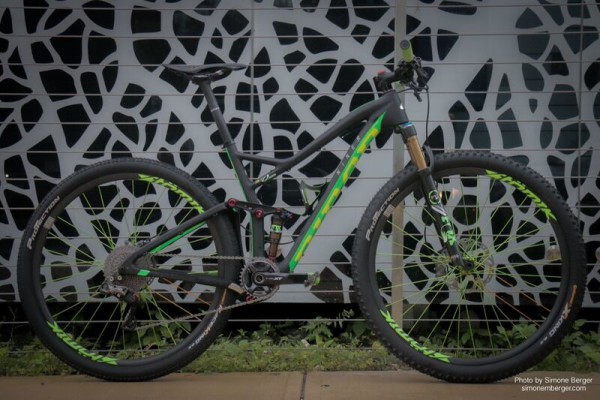 Not wanting to go “crazy on lightweight parts” the Niner RKT 9 DRO comes in at a very respectable 23.5 lbs (10.66kg) – though Julian mentions team bikes have gotten down to as low as 20 lbs. In addition to the Shimano XTR Di2 1x drivetrain,t he build includes Atomik carbon rims with Industry Nine hubs and spokes, an XT crank, Niner stem and post, and Continental tires. 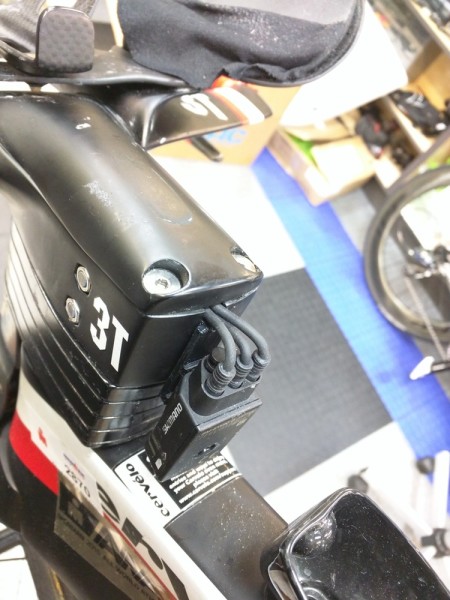 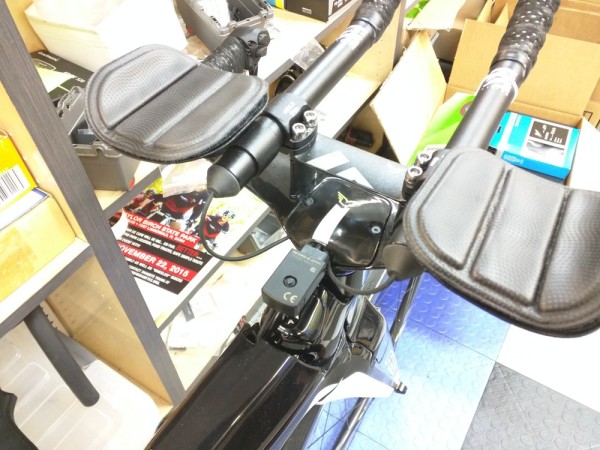 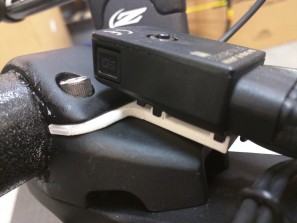 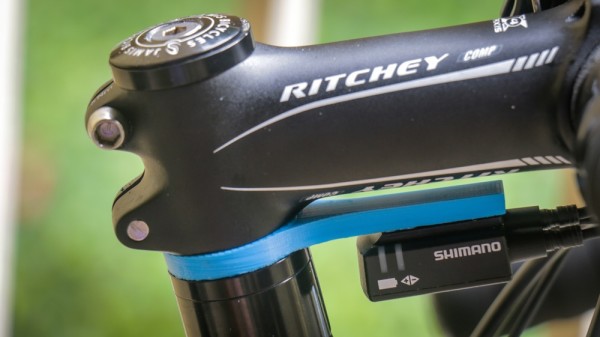 On the other side of the Di2 equation, Julian has started to 3D print and sell his own Di2 junction box mounts for road and tri bikes. Sold under the name SOS NRS, mounts are available for under stem which acts as a spacer on the steerer tube, or custom mounts for the Cervelo P5, Felt IA, or Quintana Roo PR6. Each mount sells for $24.99 and is available in a few colors.

Can we get some more details on the internal MTB Di2 wiring? I’m guessing he’s drilled holes in the bar and steer tube to make this… which sounds like an accident waiting to happen and the guarantee of absolutely no warranty support when it does. I don’t think light weight parts are designed to have random holes drilled in them.

The only hole that would bother me would be the one by the shifter. Most bars are thinner there and you have some leverage on it. Middle of the bar and steerer tubes can safely be drilled for a Di2 wire sized hole. Only thing that could cause an issue would be a hard crash; and thats not a warranty problem.

The brake hoses should be mounted internally as well. No one in their right mind would ride a bike with two visible hoses sticking out.

Some aero road bikes run the brake hoses or brake cables internal in the stem and down the frame. Brake hose inside rigid forks too. Way hard to this do this on a suspension fork, but I would like to see someone have a go at it.

@ Zach I think drilling holes through the steer tube affects structural integrity a lot more then you think. Otherwise on a bike like the Venge VIAS why wouldn’t have Specialized just done that, instead of an incredibly elaborate set-up that avoids any holes in the steer tube?

Yeah, but Di2 works on mountain bikes, and SRAM Red eTap doesn’t. I get that we are all stoked about wireless for the dirt, but knocking XTR Di2 for having wires is just a teensy bit premature. (Yes, we all know it’s coming, but wake me when I can buy it).

I would think the wire has to go all the way through the steerer, exit the bottom and enter the frame there. Steerers turn, so a single hole would just be a cable cutter, while a ~180′ slit would allow some range of motion it would wreck structural integrity – and still be a cable cutter in a crash.

As for why Specialized did it there way, it’s simple mass production, ease of assembly. The creator of this bike said he had to do intricate work to route the wire, sounds like a expensive assembly.

Julian is very knowledgeable about the DI2 system and his modifications are speculation that it would weaken the integrity of the part warranty aside. With that said I have it on my Scalpel and it makes more sense to run it hidden verses exposed to the abuse and possibly getting ripped off. It is awesome for anyone that is hesitating about issues I can’t say anything negative.

I agree that Di2 on the MTB is well worth it. Zero maintenance, perfect shifts all the time, and you can fine-tune the adjustments way more than on mechanical XTR. I didn’t get the MTB display/3-port junction because I wanted a clean front end. I used the road 3-port junction, mounted on the seat tube between the rear shock and the linkage. Then I ran 1 long wire from the shifter to the BB internal junction box and used heat shrink around the wire and the rear brake hose. It looks really clean, like a SS except for the 1 shifter.

I don’t see any spectacular about this build, I may be incorrect but Shimano Pro TRARSIS has a Bar + stem system that does a similar effect. ”HIDING THE CABLE” making holes in bar is crazy on the other hand the Junction box holders are genius.

I’ve been lucky enough to talk to some engineers at a major bike company and I asked them about drilling holes in the steer tube, specifically to run fully hidden Di2 wires (this was a few months ago). I was met with a quick and serious ‘NO, don’t do it!’. They said they where playing around with doing such a thing and it’s proving to be a lot harder then they thought.

Hi all, Willem from PRO Bikegear here. As Mgrip already mentoined there are safer solutions available for hiding the cables. For example with the PRO Tharsis XC and the PRO Tharsis trail components. These cockpits are compatible for Shimano DI2 cable and battery integration. Check for more info the PRO Bikegear website: http://po.st/zzVkFG. Kind regards, Willem – Team PRO