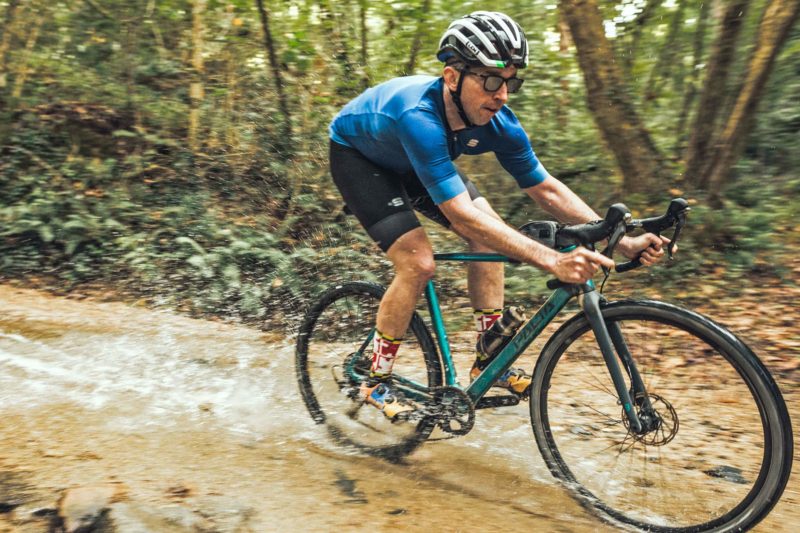 Basso’s made-in-Italy carbon Palta gravel bike has been around for a couple of years – we first saw it back in 2018. But in that meantime, I’ve had the chance to put in many kilometers on the fast gravel bike, exploring dirt roads, trails & even tarmac of Catalonia. With obvious inspiration from the Italian road racing bikes that Basso is most well-known for, the Palta is undeniably quick, both on and off-road. And as we’ve been curious to see if a more integrated or more aggressive update was in the works, Basso has just teased that Palta II is coming soon… 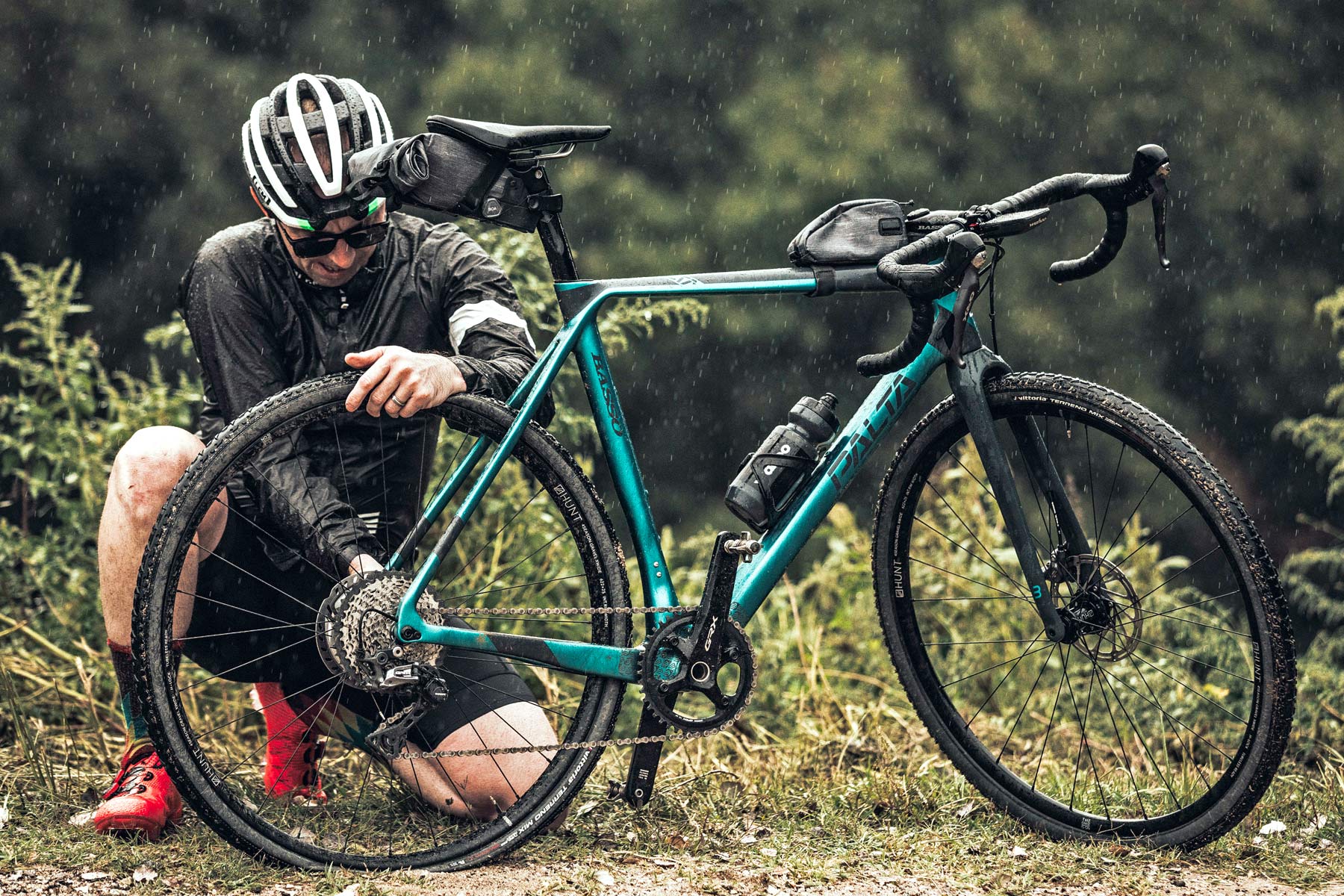 In a world where gravel bikes have continued to explode over the last several years, the Basso Palta is unabashedly a gravel road bike. The bike is born of Basso’s Italian ethos and made-in-Italy production – from design to manufacturing. This is the kind of gravel bike that will make you feel fast on the paved sections of your mixed-surface rides, and then fast again on the gravel sectors, too. 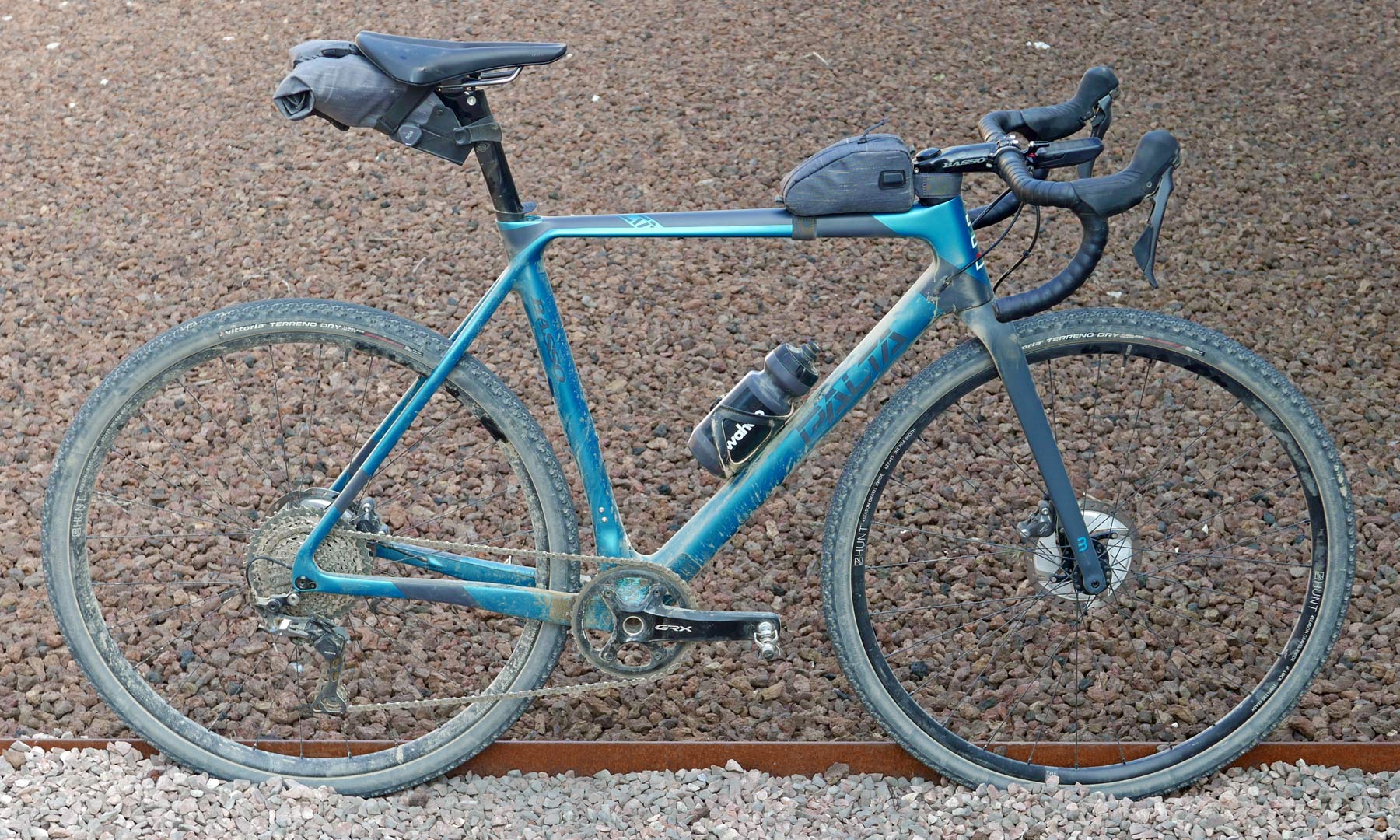 The Palta may have its roots on the road, but there are plenty of off-road adaptations that make this a capable gravel bike, too. The monocoque carbon frameset is made in Italy with room for up to 42mm wide tires, making it work best on hardpack surfaces like dirt roads and smooth gravel roads. Basso has a more affordable alloy+carbon Terra gravel bike for riders looking for extra tire volume. 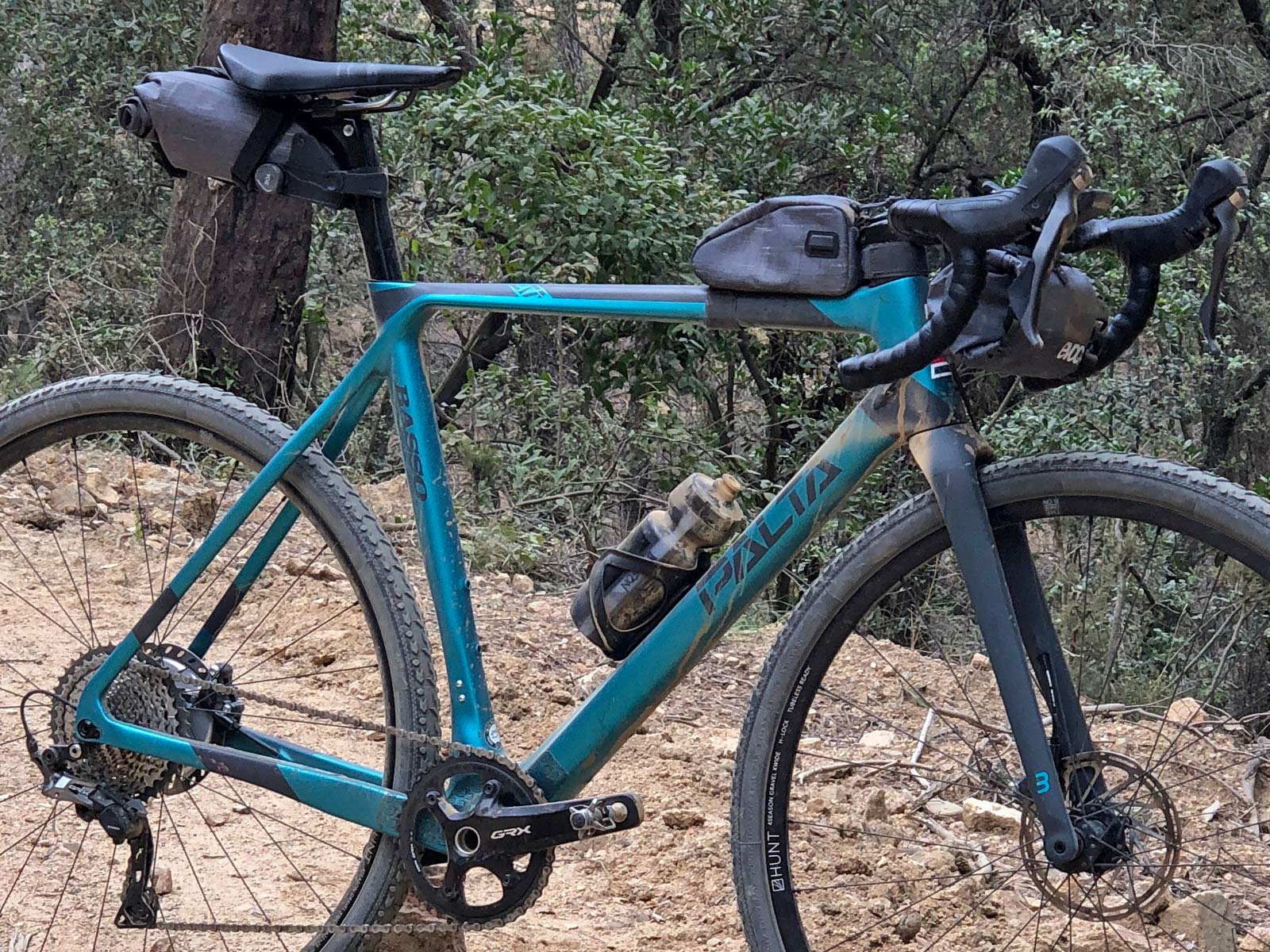 In a nod to a bit of fast adventure riding, the Palta does get an extra set of bottle bosses under the downtube and hidden mounts for full-coverage fenders, but no extra fork mounts. Back to road roots, a triple set of bosses inside the main triangle on the downtube allow riders to set one bottle lower for more aero advantage (or maybe to better fit a partial bikepacking frame bag?)

The Palta also features an integrated ‘aero’ seat clamp mated to a carbon post, which Basso describes as vibration-damping.

The bike is meant to be 1x only – meaning there’s no front derailleur routing – instead opting for an optional high-mount chain guide to add drivetrain security without sacrificing tire clearance where it is already tight. But AXS wireless 2x drivetrain remains a possibility, as well. 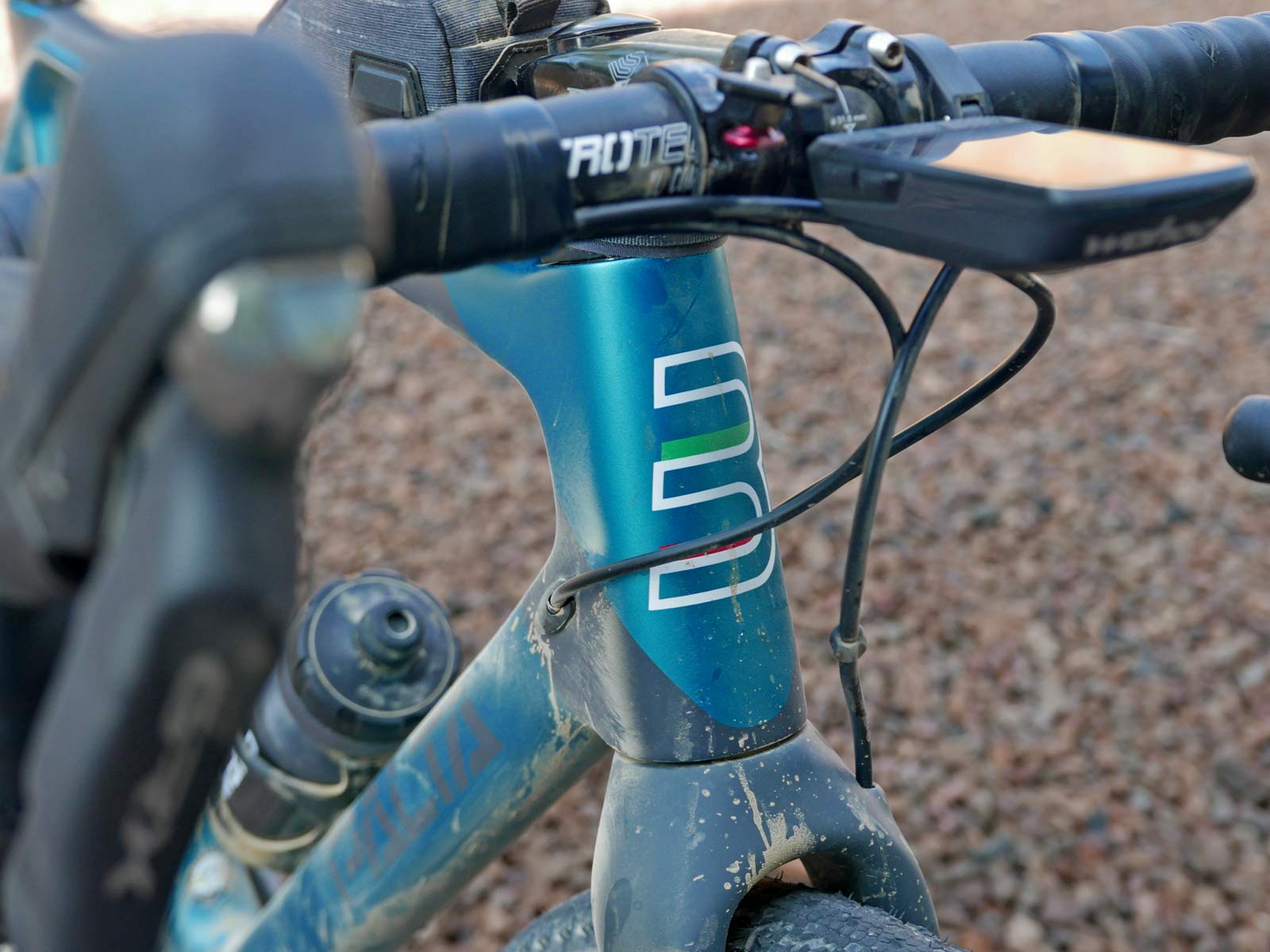 Up front the cockpit is decidedly low for a gravel bike, again taking inspiration from road #slamthatstem mentality with a flattened stem profile and a matching headset spacer stack. It gets regular internal cable routing through ports in the sides of the headtube, but still manages to look neatly integrated next to the latest crop of full-internal bikes. 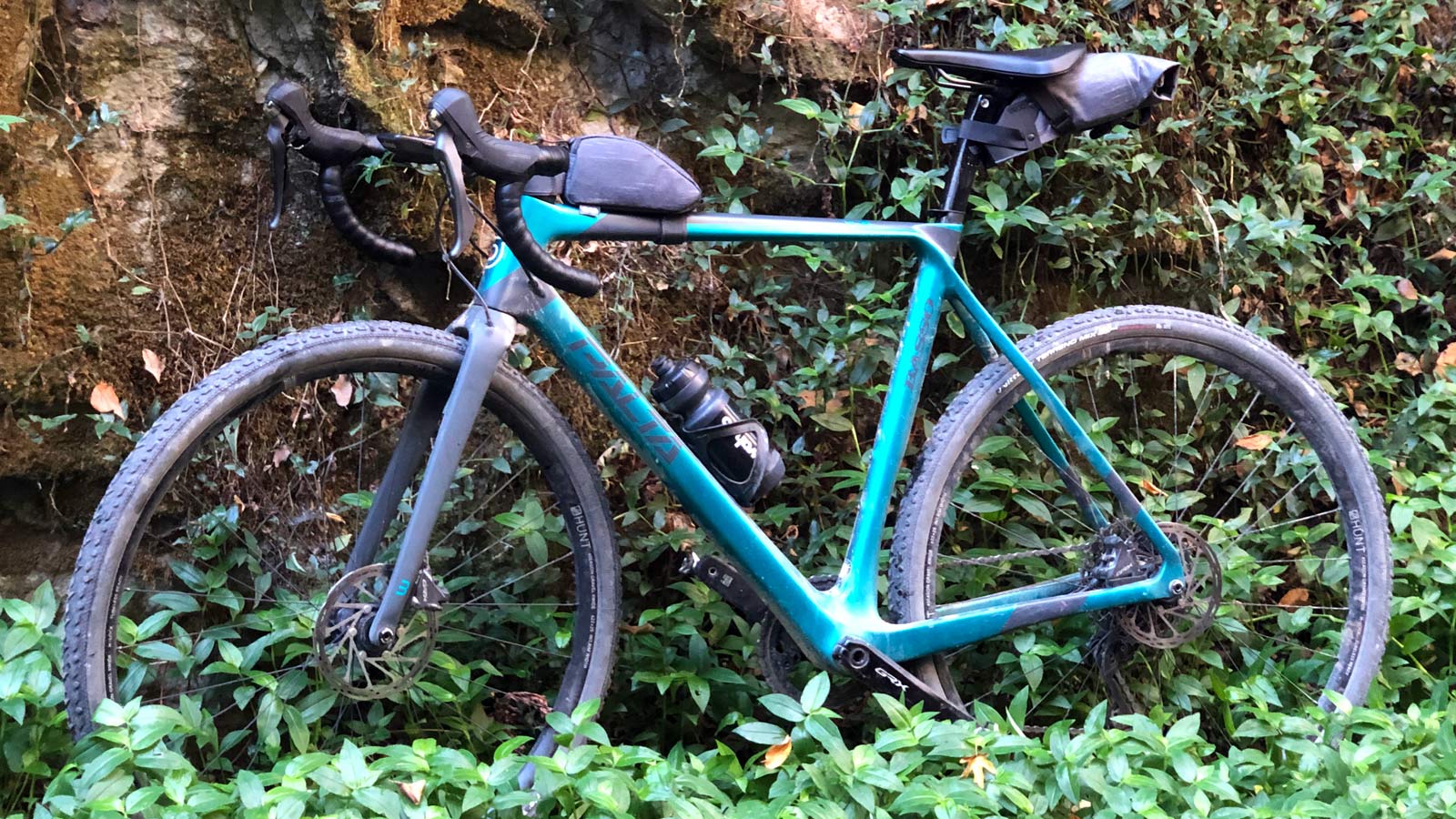 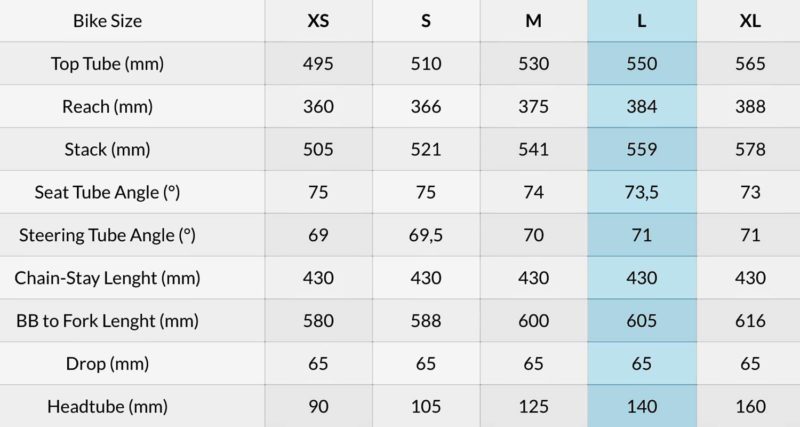 The bike gets endurance geometry that is well-suited for riding a wide-range of surfaces. Its focus is on speed, though, so its sharp handling does require attention while riding off-road.  The Palta comes in five stock sizes (XS-XL) to fit a wide range of riders, and in three colors that can each have builds customized through Basso bike dealers. 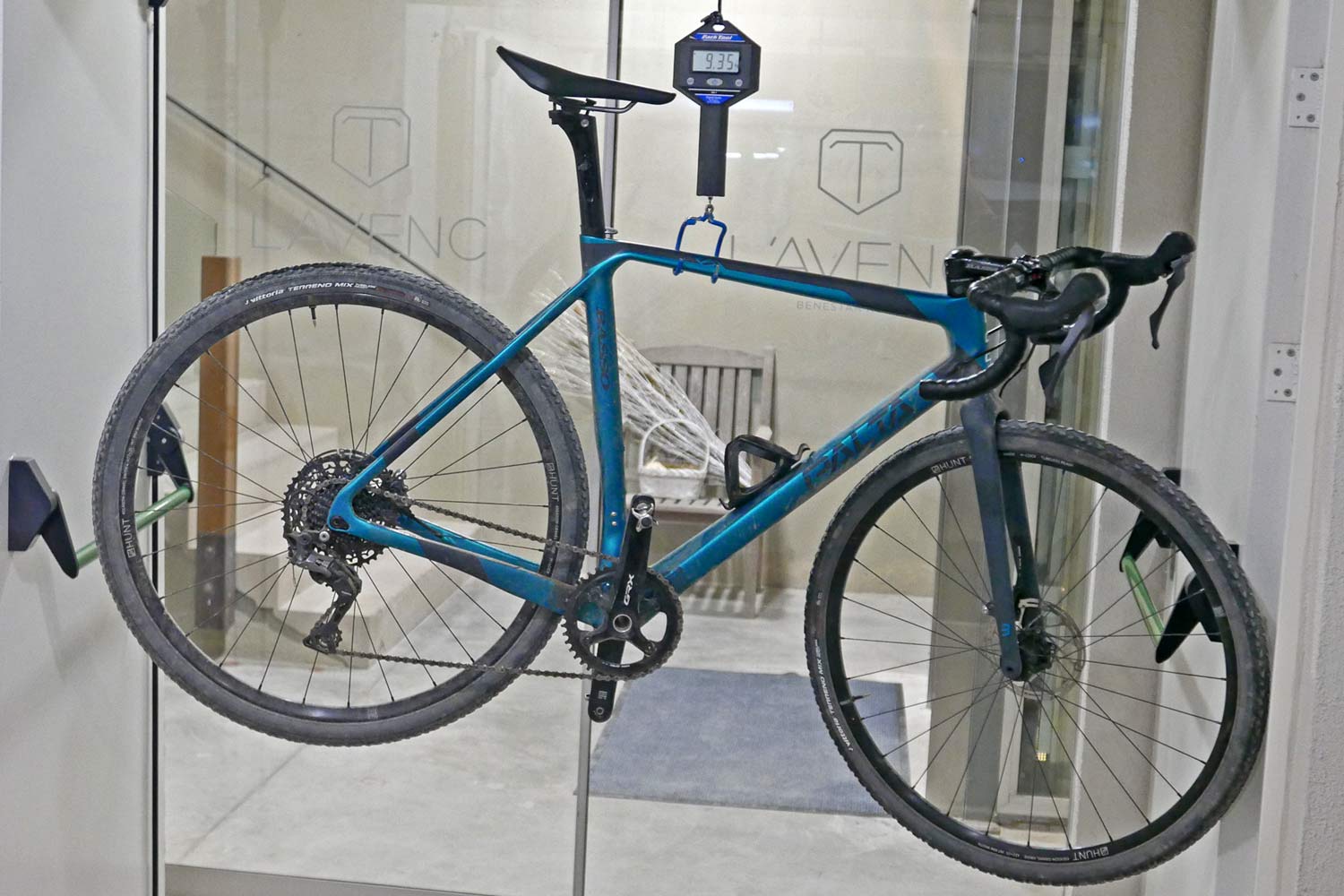 The Palta isn’t really a superlight gravel bike, but it is also surprisingly affordable for a carbon frameset. At 9.35kg with alloy wheels, Shimano GRX mechanical, and alloy wheels, the test bike I rode was on the heavier end of the carbon gravel bike spectrum. But to be honest, I didn’t really notice the roughly 1/2 kilo extra over many other gravel bikes I’ve been riding. 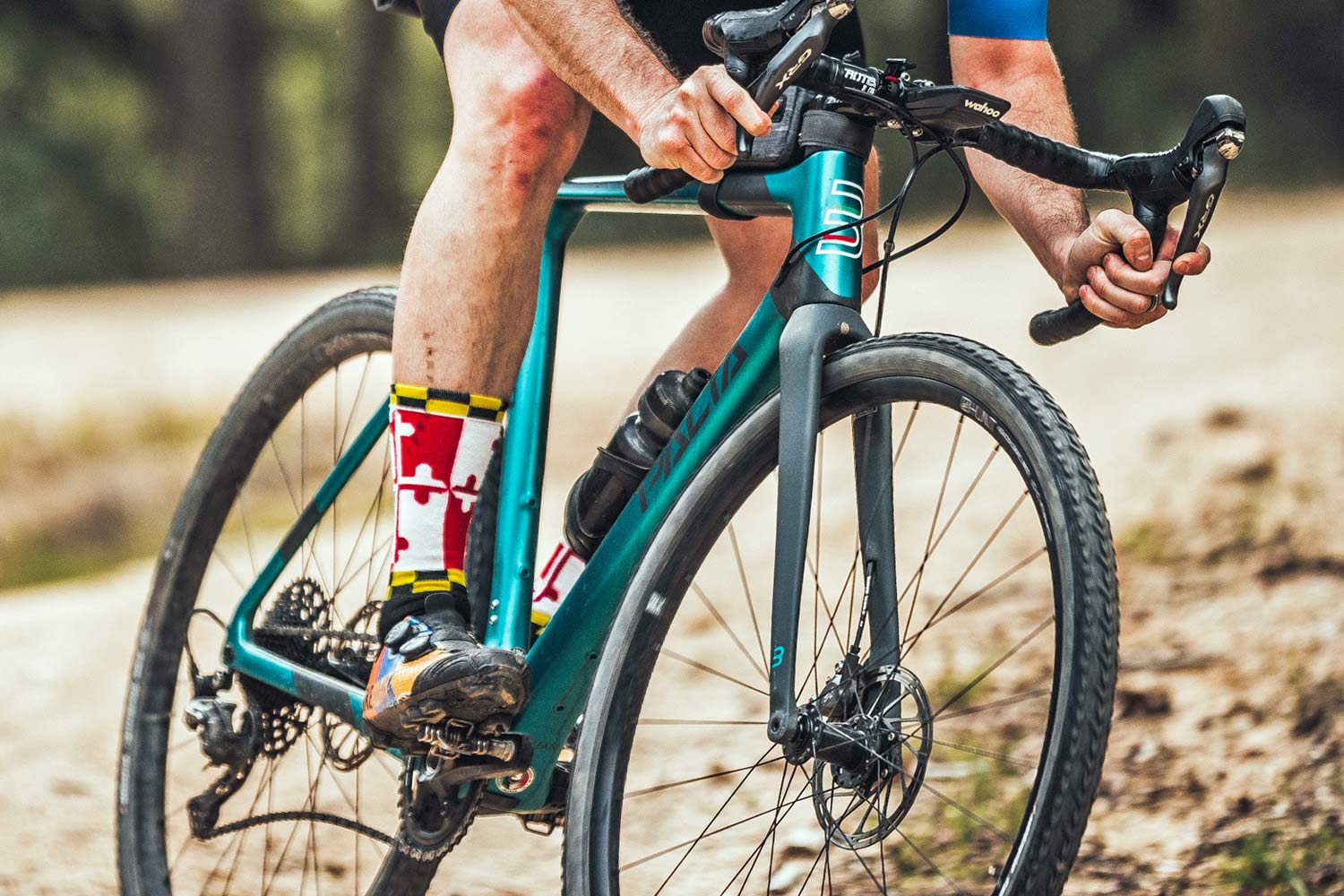 But with the Palta frame kit (frame, fork, headset, stem, and seatpost) selling for just 1990€, it seems like a great value for a European-made carbon bike, and pretty much the most affordable frameset out of the Basso bikes workshop. Complete bikes start as low as 3500€ in an affordable GRX mechanical 1x build similar to what I tested (+/- a Hunt wheelset), and climb up to around 5650€ with carbon wheels & GRX Di2. 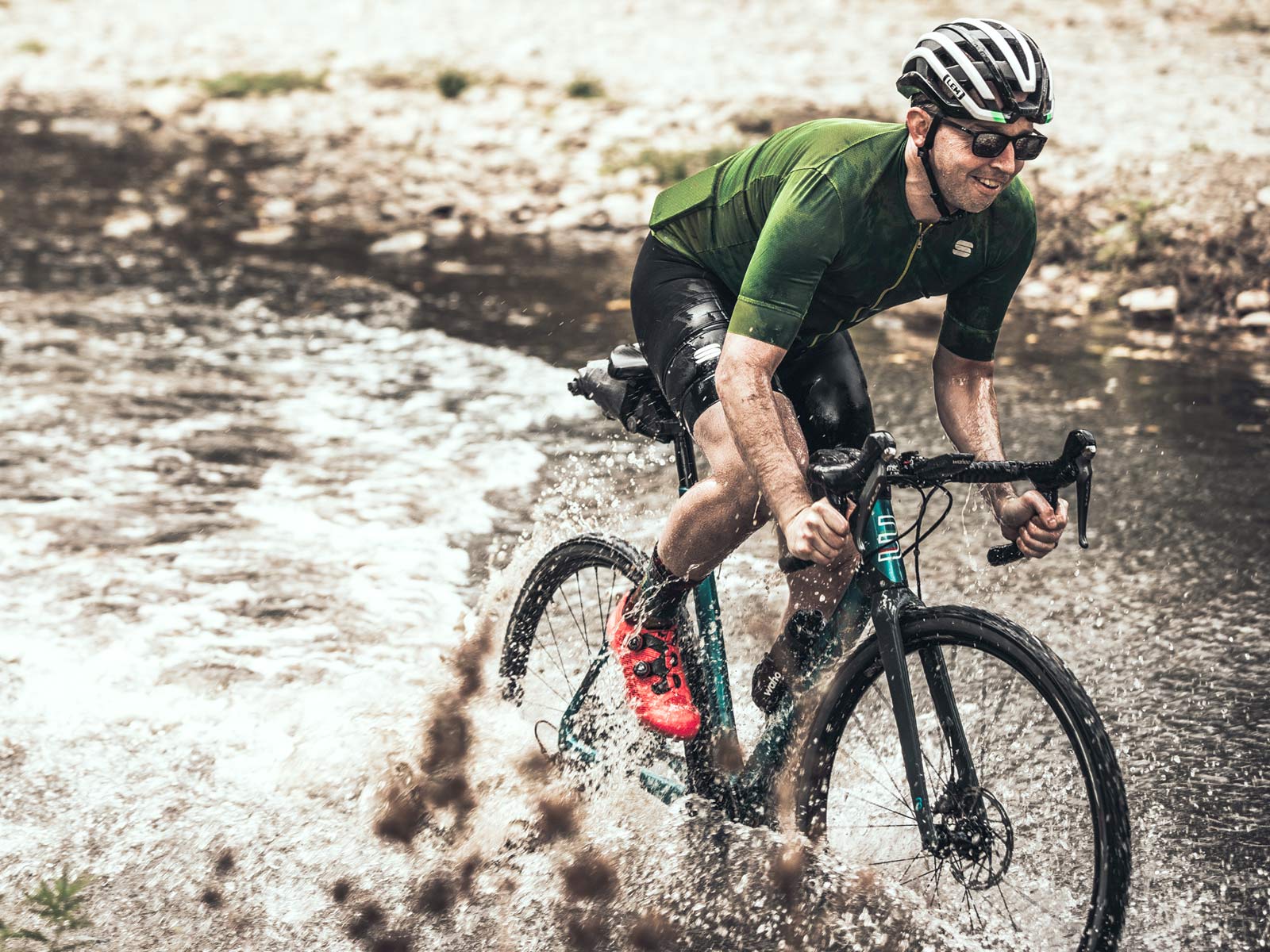 Much of the core of the Basso Palta’s gravel capabilities and where you are likely to ride it comes down to the tires you will fit. Most riding I have done on the bike has been with 38mm Vittoria Terreno Mix tires fitted to 25mm internal Hunt 4Season Gravel X-Wide wheels. That has the tires measure out to a real 40mm wide, with decent extra clearance for debris, but not really for any serious mud.

Basso does spec some wider tires on their standard complete bike builds, but with slightly narrower rims. 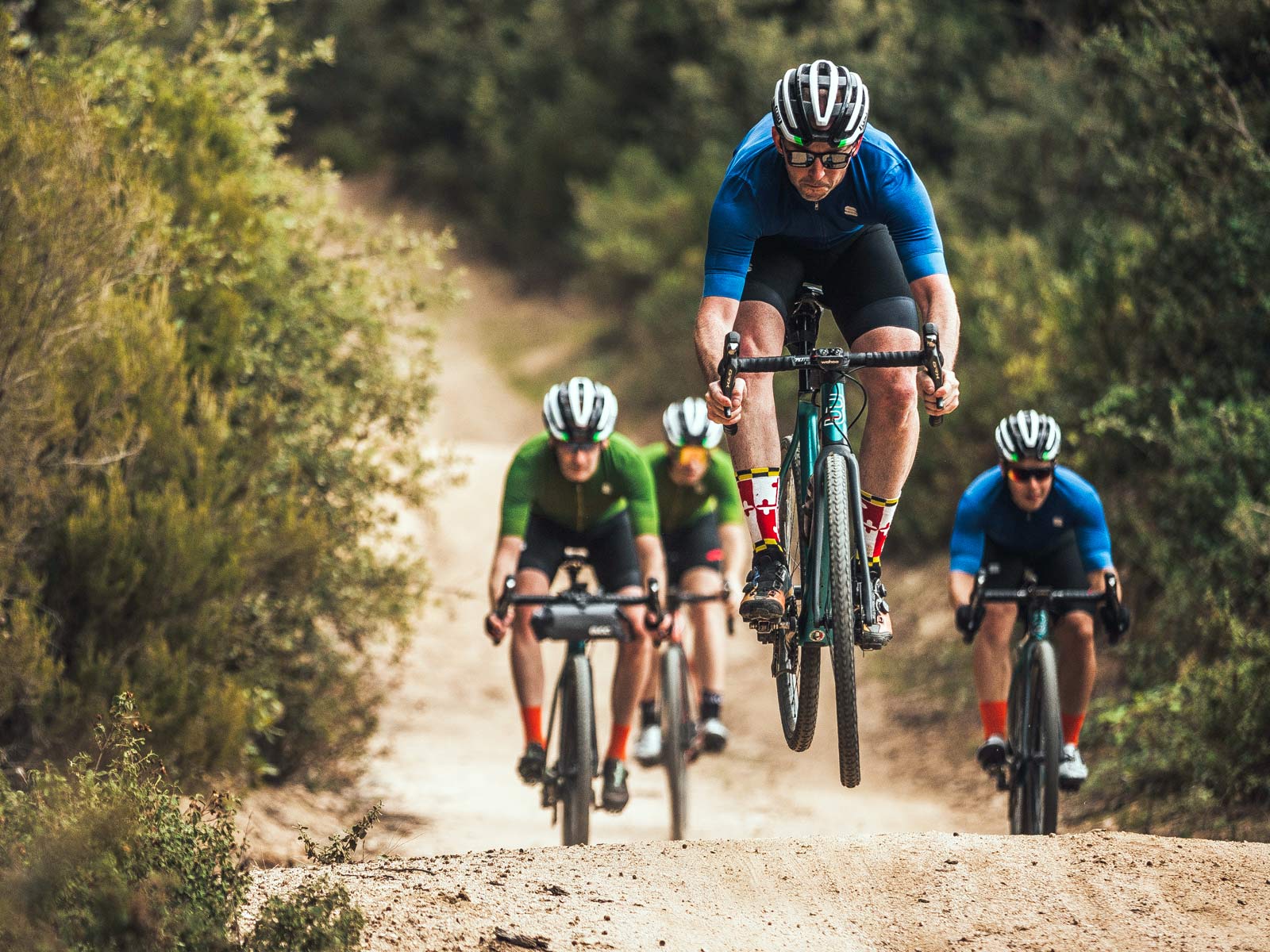 A 40mm tire (Basso quotes max 42mm clearance) isn’t very big in the modern gravel landscape. But if you don’t ride a lot over chunky, fist-sized gravel or baby-head rocks, it could be fine for you. Generally, I will ride 40mm gravel tires on my own personal gravel bike most of the time, only really opting for something in the 45mm range when doing loaded, multi-day bikepacking adventures.

That said, I didn’t hold back during my time on the Palta, and had no troubles with the tires that were fitted – digging deep into loose gravel, soft sand, and hardpack dirt roads. I can especially recommend the setup for the mostly dry dirt roads between Barcelona & Girona where I rode the Palta with Thomson Tours previewing their new gravel trip offering.

Final Thoughts on Fast Gravelling with the Basso Palta 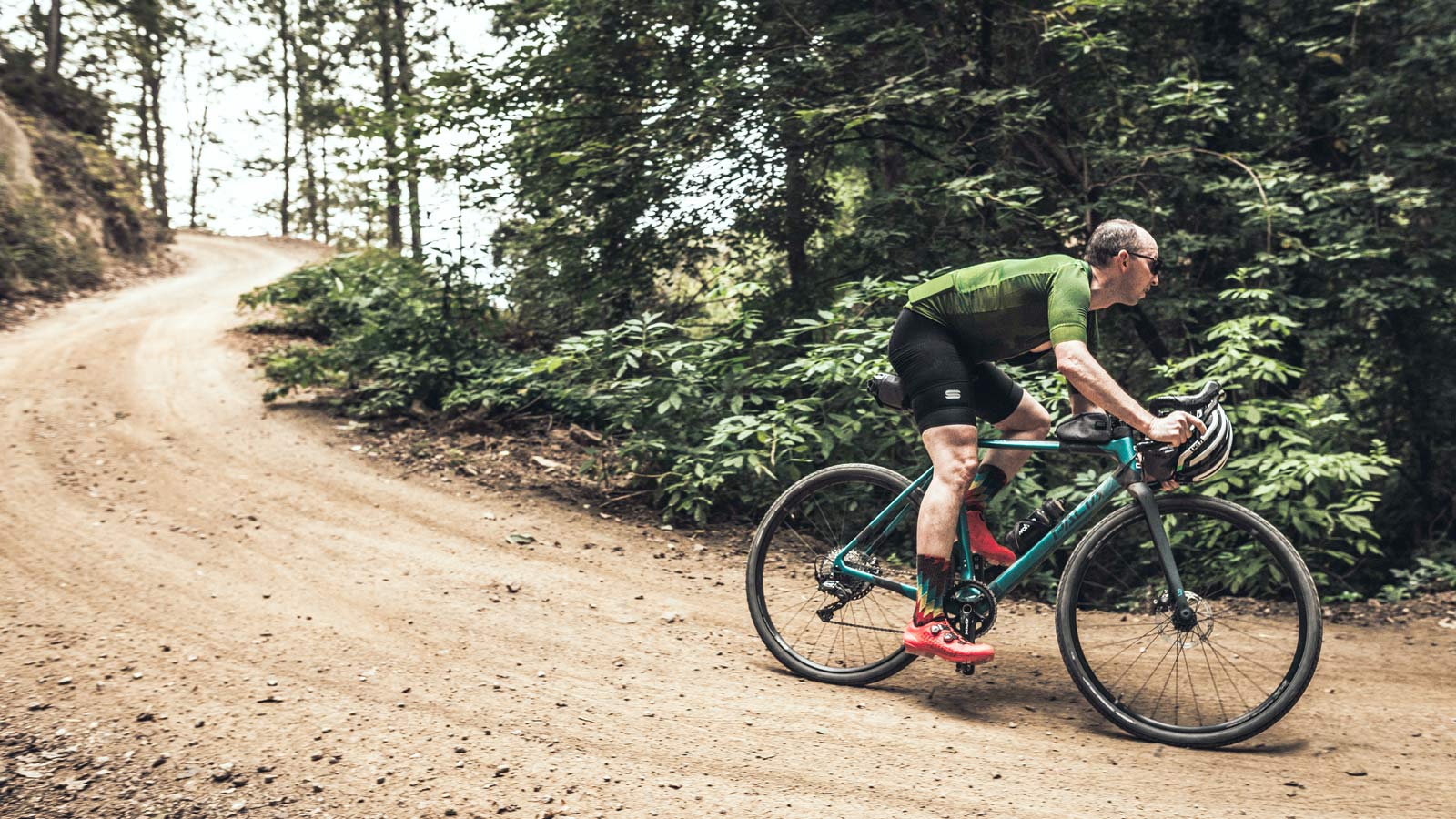 As much as Basso says “Adventure Awaits” with the Palta, it is not really an epic adventure gravel bike that you have fun riding across rough mountain bike trails. And I wouldn’t pick it for multi-day bikepacking exploration, either.

But as the definition of gravel expands exponentially outward, the Palta might be a welcome dose of specialization. In the end, this gravel bike remains firmly rooted on the road – paved road, dirt road, gravel road. No shame in being called a gravel road bike. The Palta is surely up for plenty of exploring of hardpacked roads, and would definitely make for a solid gravel racing bike. 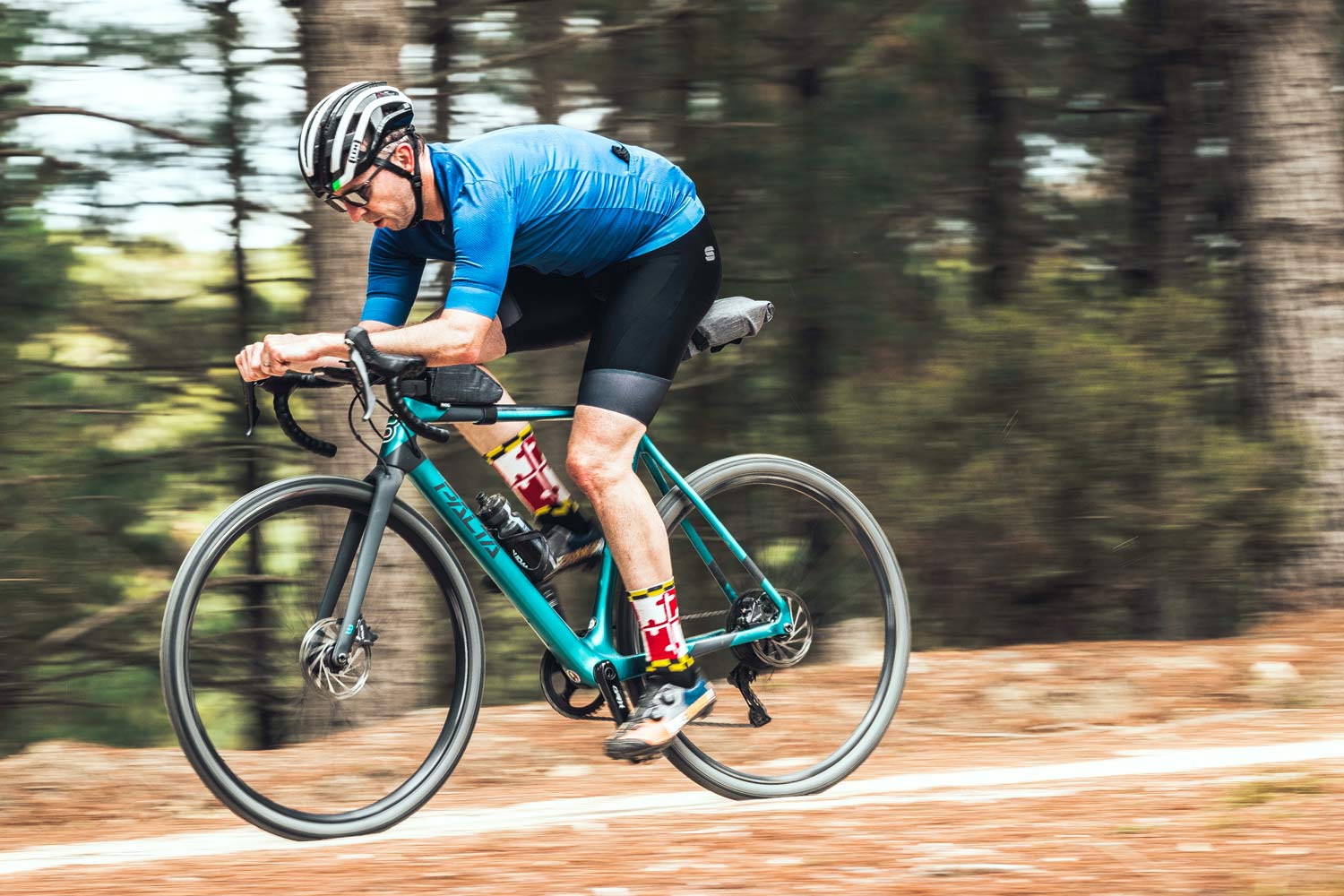 My final thought on the Basso Palta is that it is a super fun and wildly fast-feeling gravel road bike, well-suited to riders who appreciate sharp handling and overall stiffness. Both roadies & mountain bikers looking for a relaxed gravel ride should look elsewhere.  This is a bike that wants to go fast over any terrain. Put modern 30mm tubeless road slicks on it and it’ll feel like a limitless road bike. Then swap a set of knobby 40mm tires back in, and you’ll be hunting dirt roads again.

It is a gravel road bike that never forgets the road itself.

So what’s next for the Palta II? 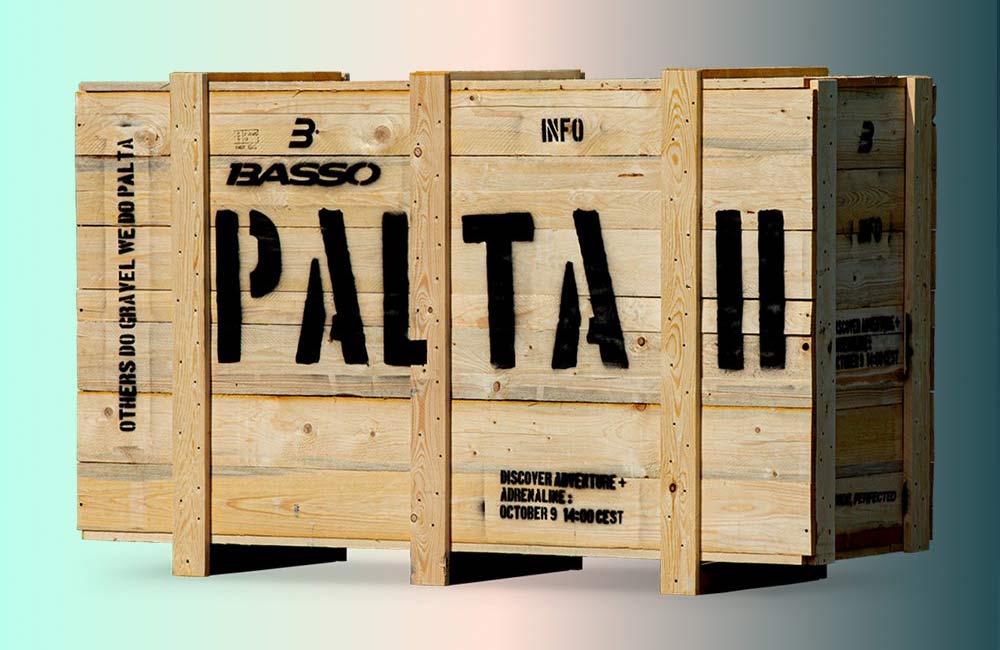 Just as I share my detailed riding experiences with the current Palta, Basso has started to tease version 2.0 of their flagship gravel bike. We don’t have any more details yet, but know that the new Basso Palta II is coming soon – specifically on October 9th.

What’s next is still a guessing game for us, but I would suspect the new Palta will retain the road-inspired character of the original, and likely move to more integrated cable routing, an even more tidy cockpit… like seen on the latest Basso road bikes, and maybe incrementally bigger tire clearance. We’ve asked Basso for more details and hope to have a chance to ride the new gravel road bike ahead of its official reveal early next month.

I would really like to know where I can get the cycling socks w/ the Maryland flag pattern.

Seems like a very average bike for more than average cost. 42mm tire clearance is pretty pathetic in today’s market on top of the high cost. The frame looks like an open molder with a fancy paint job.

Can’t really say it’s an off road machine when it has no dropper post, only fits 42’s, and the fork isn’t suspension corrected to run an MRP/Fox/Lauf fork. It’s just a road bike in the end.

@Tim, hit up SockGuy. It’s really just a pair of socks, but I can’t recommend them highly enough. Trusted synthetic socks, and simple merino blend ones in other unique designs, too. Step up your #sockgame.

@Jeff & Pink, clearly not a trail adventure bike where suspension & droppers come into play for real. At the same time, most ‘contemporary’ road bikes still just hover around 30mm tires. The Palta doesn’t try to be everything to everyone. Instead, 40-42mm tires are what are winning fast gravel races. And this quick-feeling, made in Italy carbon gravel road bike does what it set out to do, at around the same price level as some made in Taiwan or China framesets.

Exactly what Cory says. It’s a fast bike that can be taken off-road. It’s also perfectly capable off-road if you grew up with 80s / 90s MTBs and haven’t been coddled with modern full-suspension bikes.

It’s far from “an open molder with a fancy paint job”, which is even answered in the page here itself, where it states that it’s one of the few bikes actually built in-house by the manufacturer, rather than outsourced to a manufacturing plant.

I bought a Palta after a full year of trying pretty much everything to find my “best of all worlds” bike.
It now holds Strava KOMs on a range of surfaces and I don’t often even change the tyres, just the pressures. It runs with my cycling club who are all on fairly high end aero road bikes and then mid-week I’ll go trail hunting with a bunch on modern full-sus bikes.
I used to race rigid MTBs back in the day and the Palta, in the right hands, will crash it’s way over pretty much anything, it’s just not going to hold your hand and fix your mistakes.