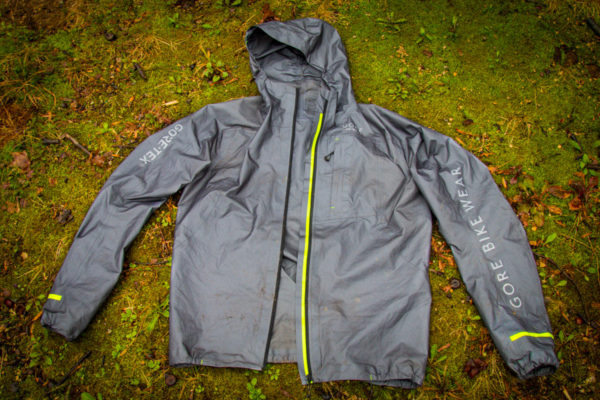 When it comes to inclement weather riding apparel, I seem to practice a JIT approach. Meaning, it usually shows up just in time for what turns out to be an extremely wet/snowy/cold ride. Gore Wear specifically seems to have this effect without fail. Every time a piece of theirs has shown up for testing, I’ve ended up somewhere in the world in less than ideal conditions – but incredibly thankful that I had the right gear. That continues with the new C7 Gore-Tex Rescue jacket. 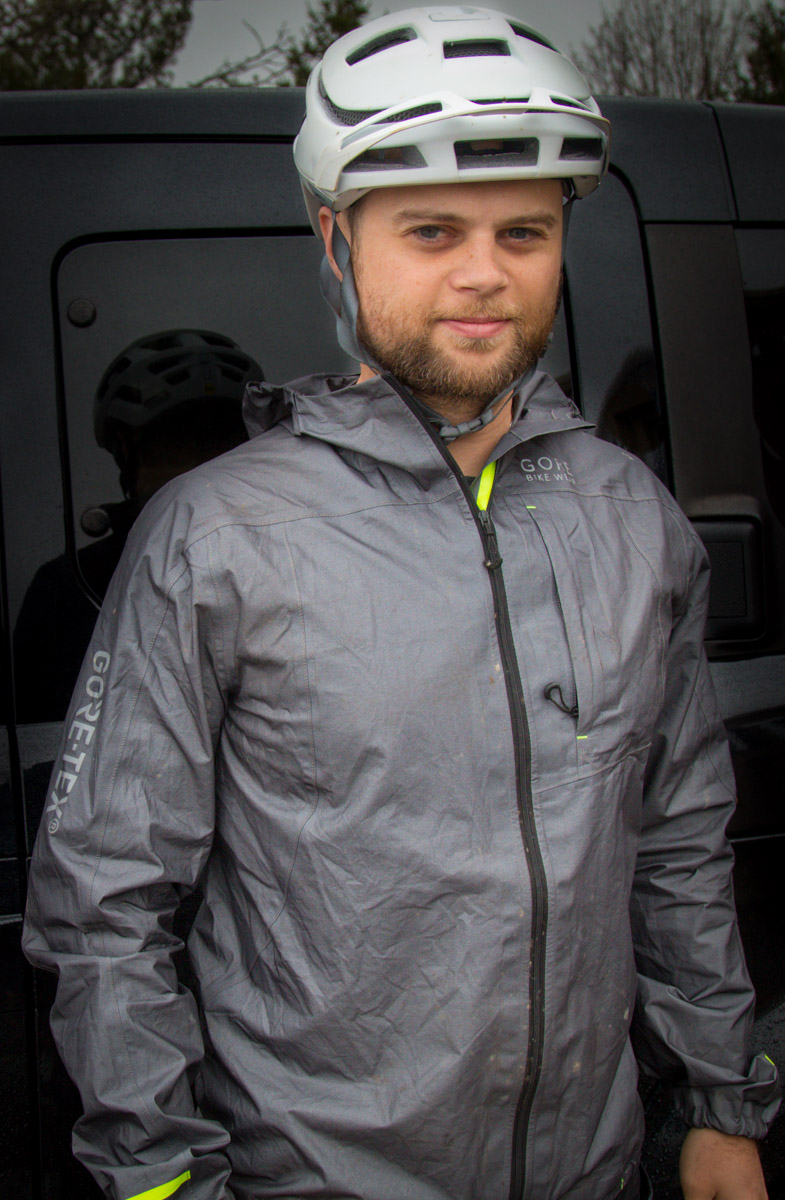 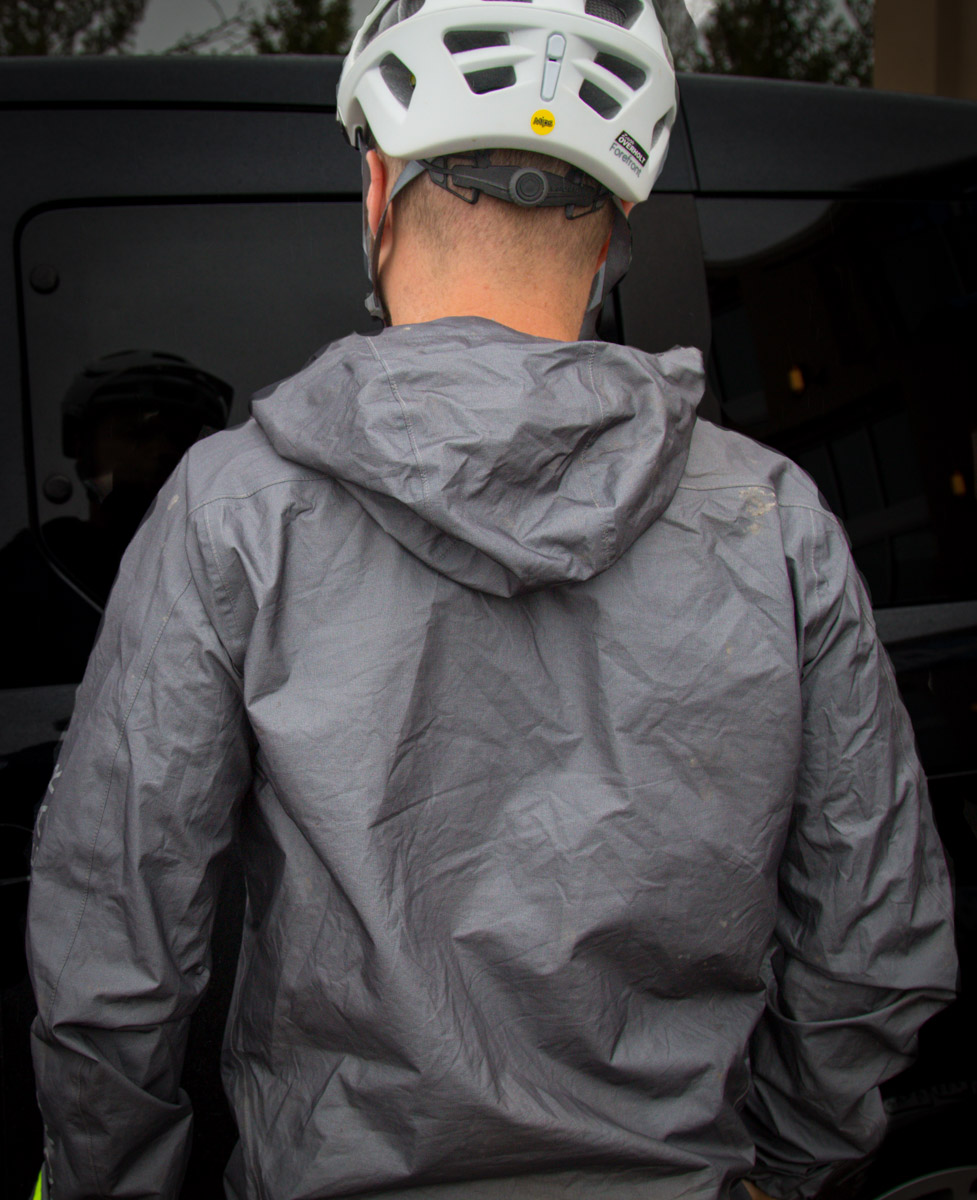 Compared to the C7 Windstopper Rescue Jacket, the C7 Gore-Tex Rescue jacket is quite a different shell all together. Built with a full length frontal zipper instead of the half zip of the Windstopper jacket, the Gore-Tex jacket is also fully waterproof as the name would imply. That’s thanks to the taped seams and Gore-Tex Active 3-layer laminate construction which is said to be the lightest 3-layer they’ve made to date. 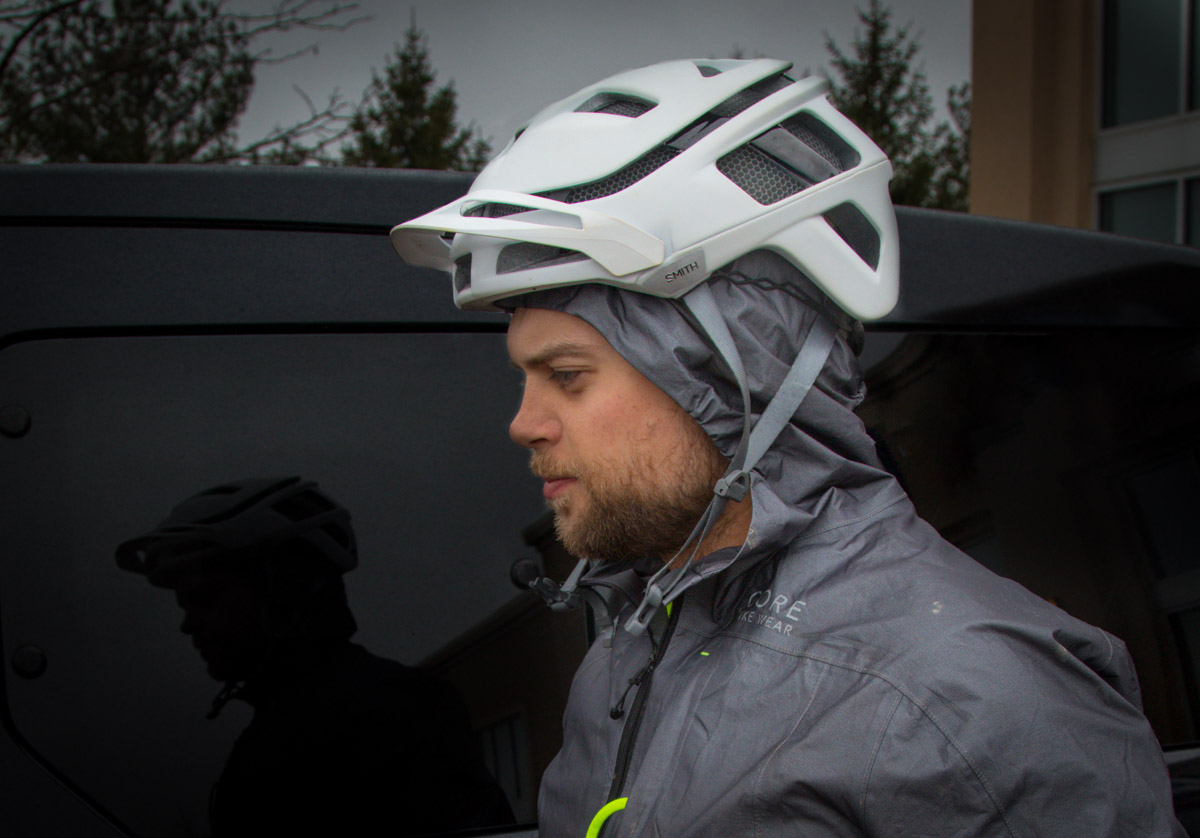 The simple, lightweight construction includes a hood that is meant to go under your helmet. There are no drawstrings or cords to add weight and complexity, but the elastic hem does a pretty good job of keeping the fit in check. There’s also no way to stow the hood when not in use, but I never thought the hood was an issue when riding with it out the back. 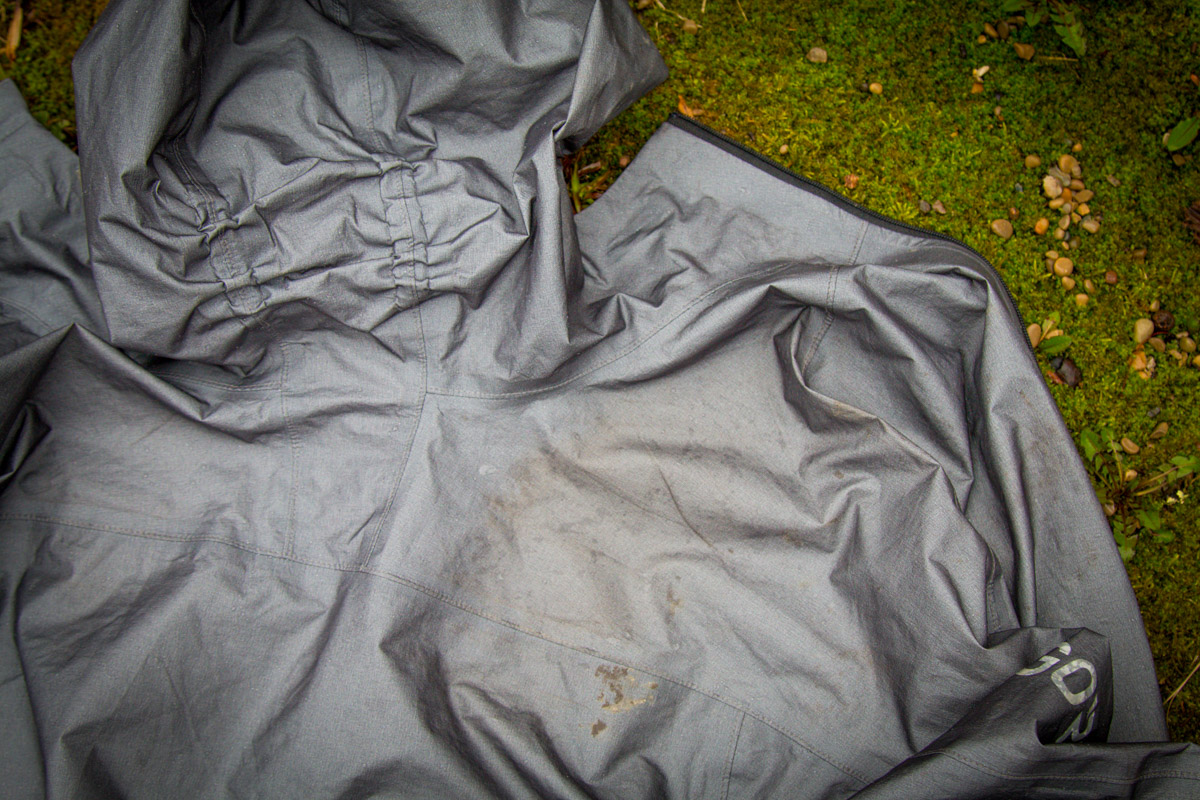 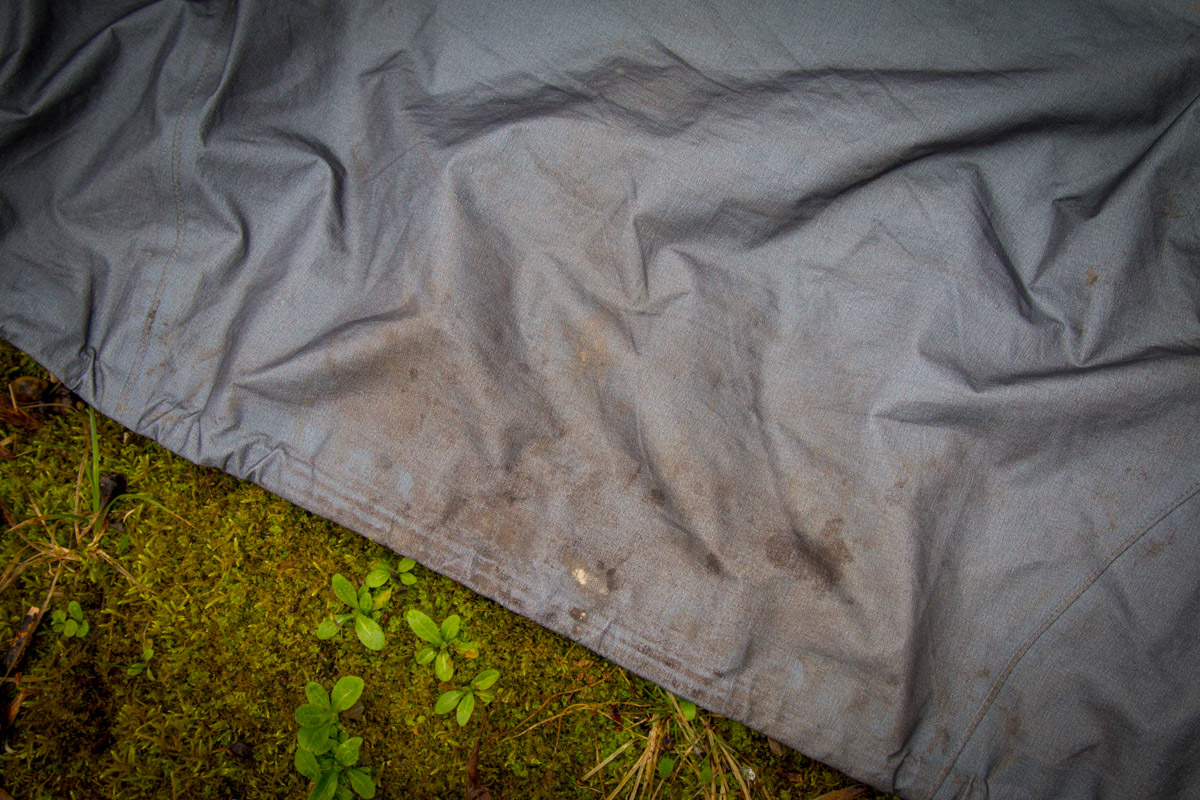 The addition of the third layer is an important distinction here – without it, Gore would recommend against using a backpack while wearing the jacket. But since it does have three layers, you’ll be able to run a backpack – just expect the jacket to show some wear if you do, while riding in muddy conditions. The photos above show the results of wearing packs on at least 6 really wet and muddle rides. In the spots where the pack rubs agains the jacket, there is a good amount of mud that has been ground into the outer layer of the jacket. This doesn’t really effect the performance, but on a light grey jacket it’s pretty noticeable. A good washing will remove most of the staining, but as with any three layer laminate shell, you may have to reapply DWR coating to theses areas to keep the outer layer from “wetting out”. 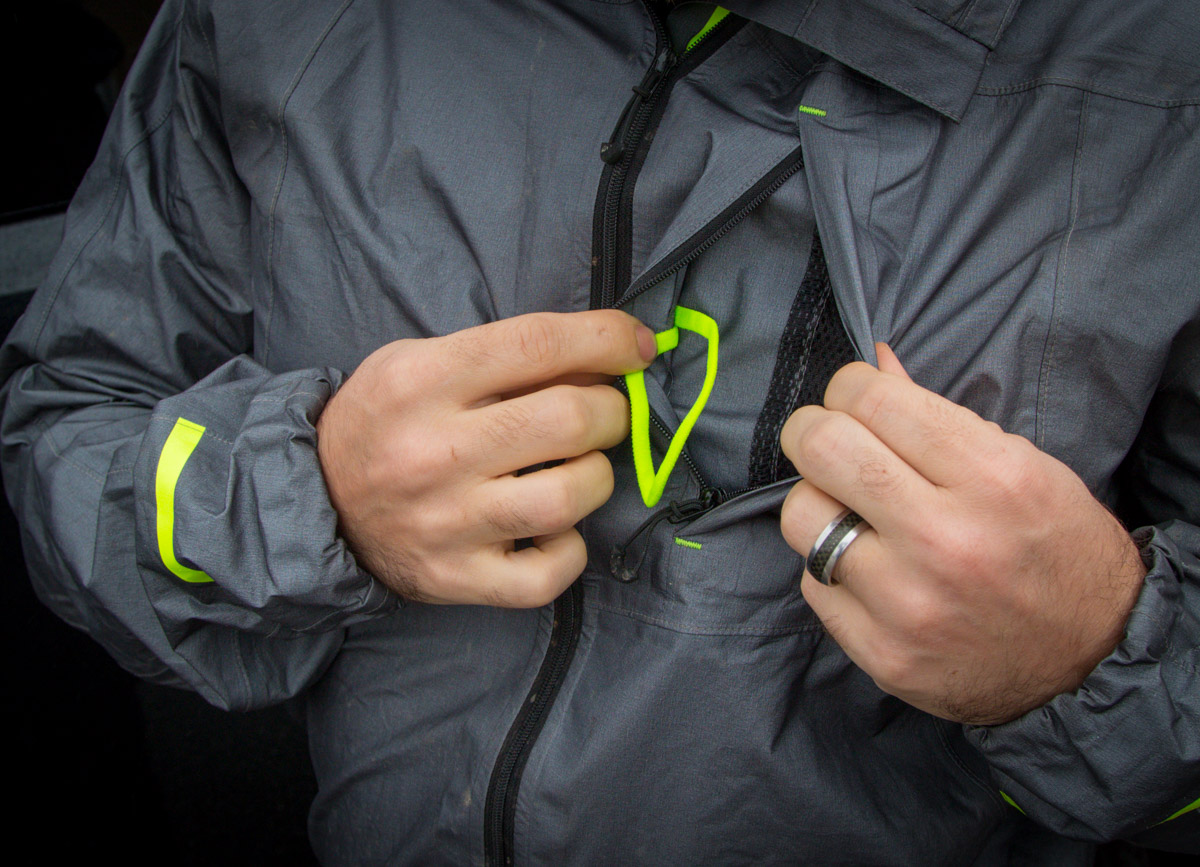 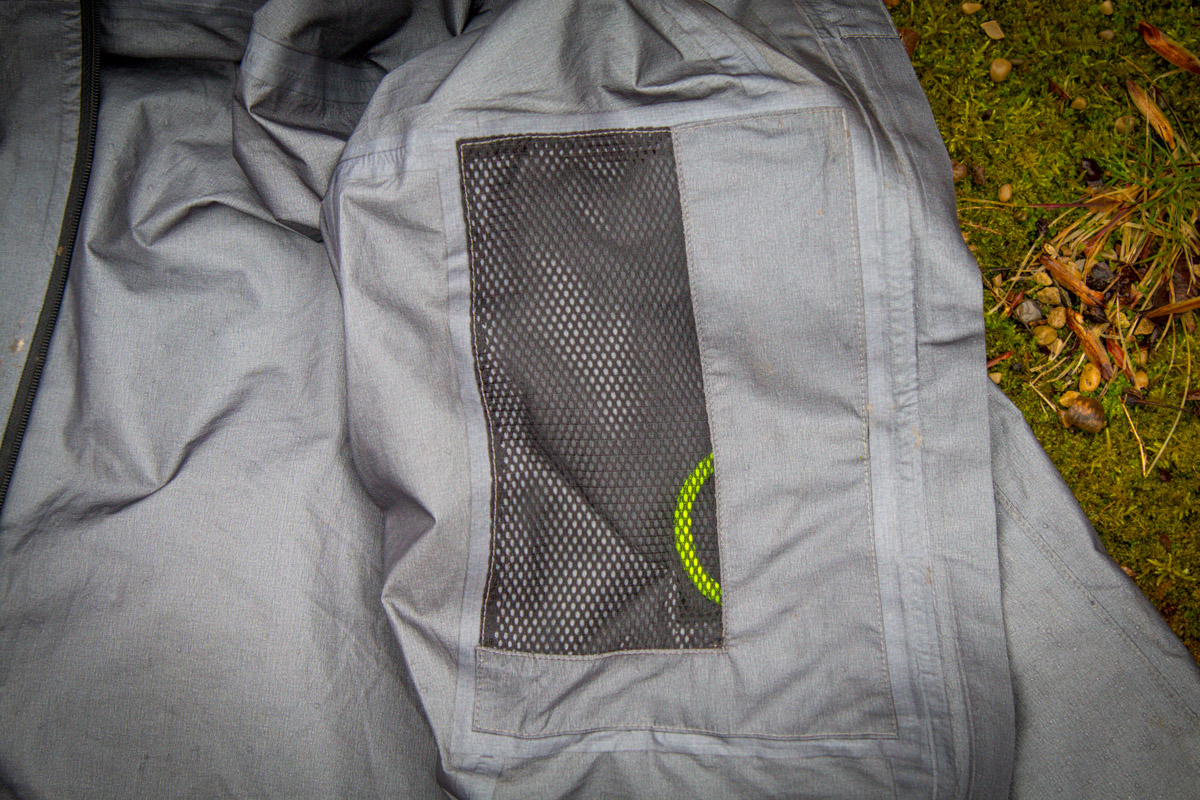 Unlike the C7 Windstopper Rescue jacket, the Gore-Tex version no longer offers the ability to pack down into the chest pocket. Instead, you’ll find a zippered pocket under the chest flap with a mesh window into the inside of the jacket and a key loop inside. Also, the move to a full zipper is a welcomed. While I appreciate the weight savings of a half zipper, being able to quickly put on or take off the jacket without removing your helmet is key – especially when riding in a group that may or may not want to wait for you. 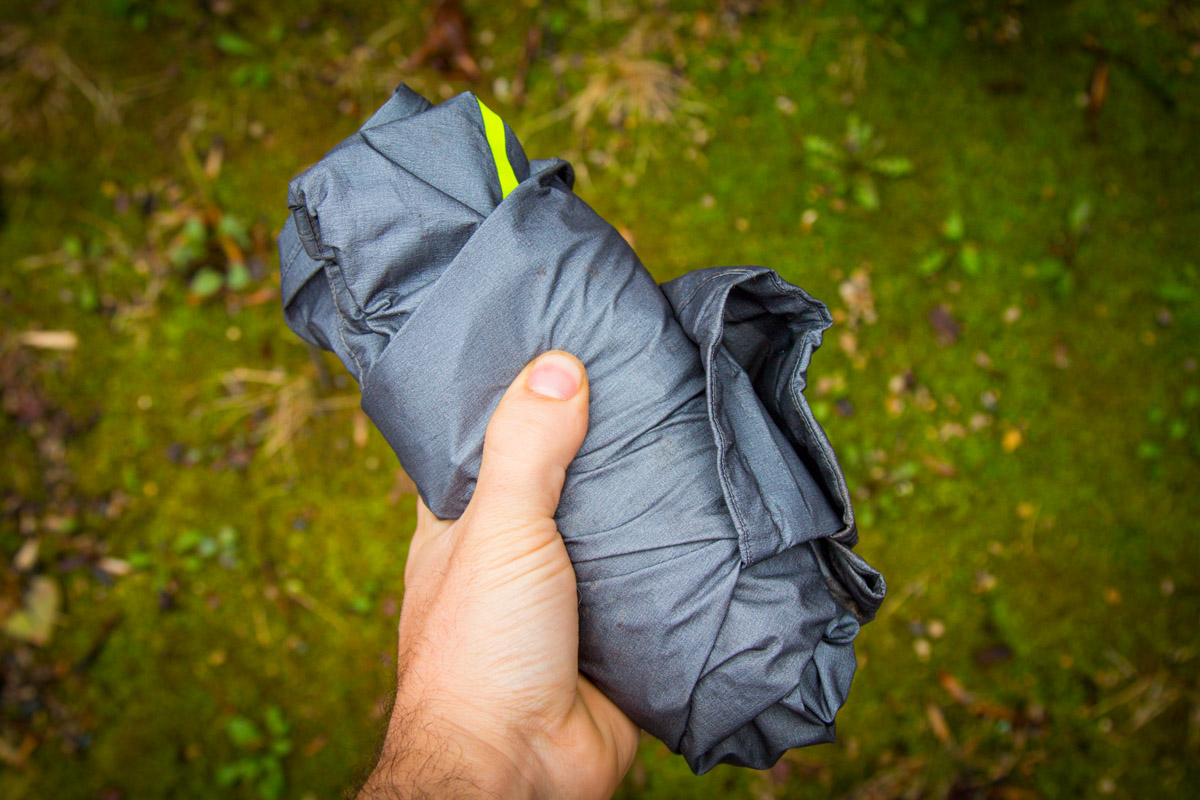 While I admit I miss the ability to pack it neatly into a small bundle, the jacket does pack down very small for a fully waterproof shell. About the size of a small burrito, the jacket fits in most jersey pockets, packs, and bags. 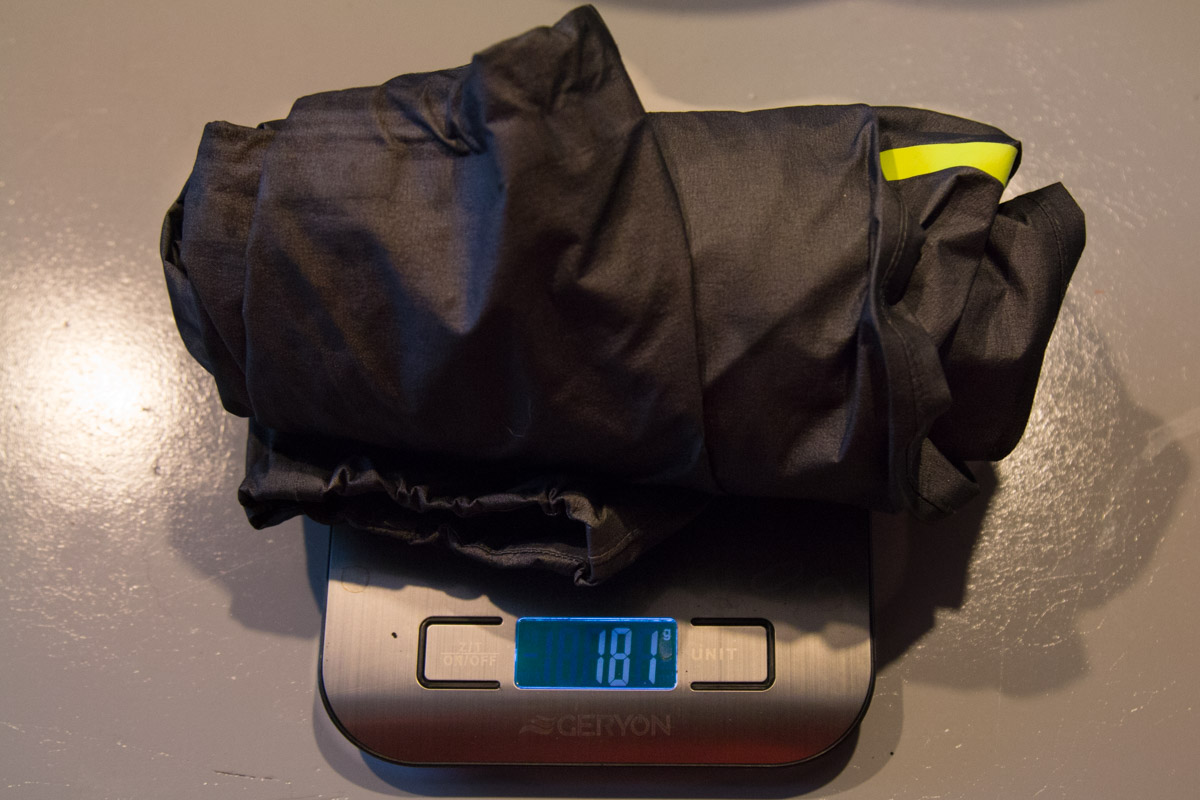 Because of the simple build, the jacket is also super light at 181g for a medium. Compared to some other fully waterproof shells in my collection, that’s about half of what many weigh, and only 57g heavier than the C7 Windstopper Rescue. 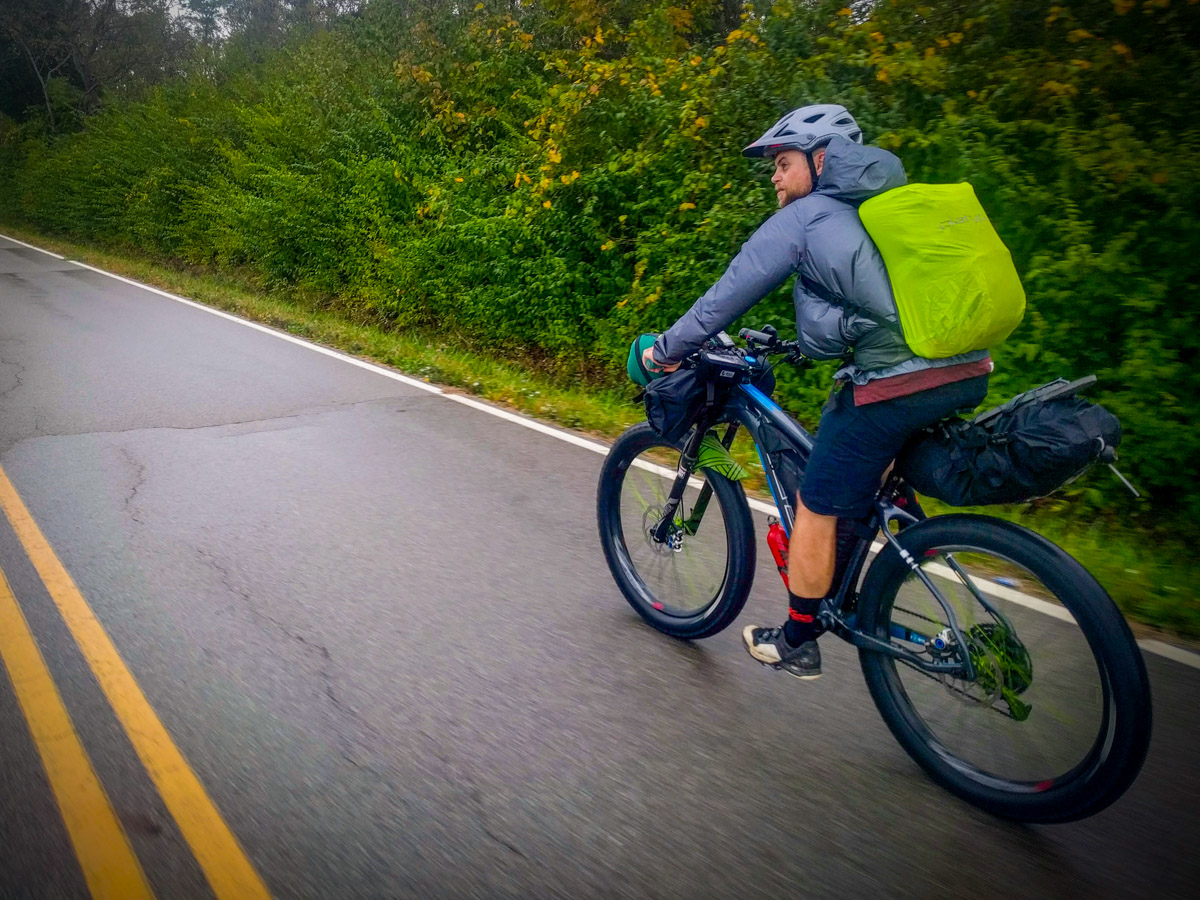 Like almost all Gore Wear, I went up a size on the C7 Gore-Tex Rescue jacket. I’m typically a small in both shorts and jerseys/jackets (5’8″, 145lbs), but I always find Gore Wear to run on the small side – especially in the shoulders and chest. I have fairly broad shoulders and chest for my size, otherwise, I could probably get by with a small. The benefit with the medium though is that I have plenty of room to layer underneath since this jacket offers very little in the way of insulation. 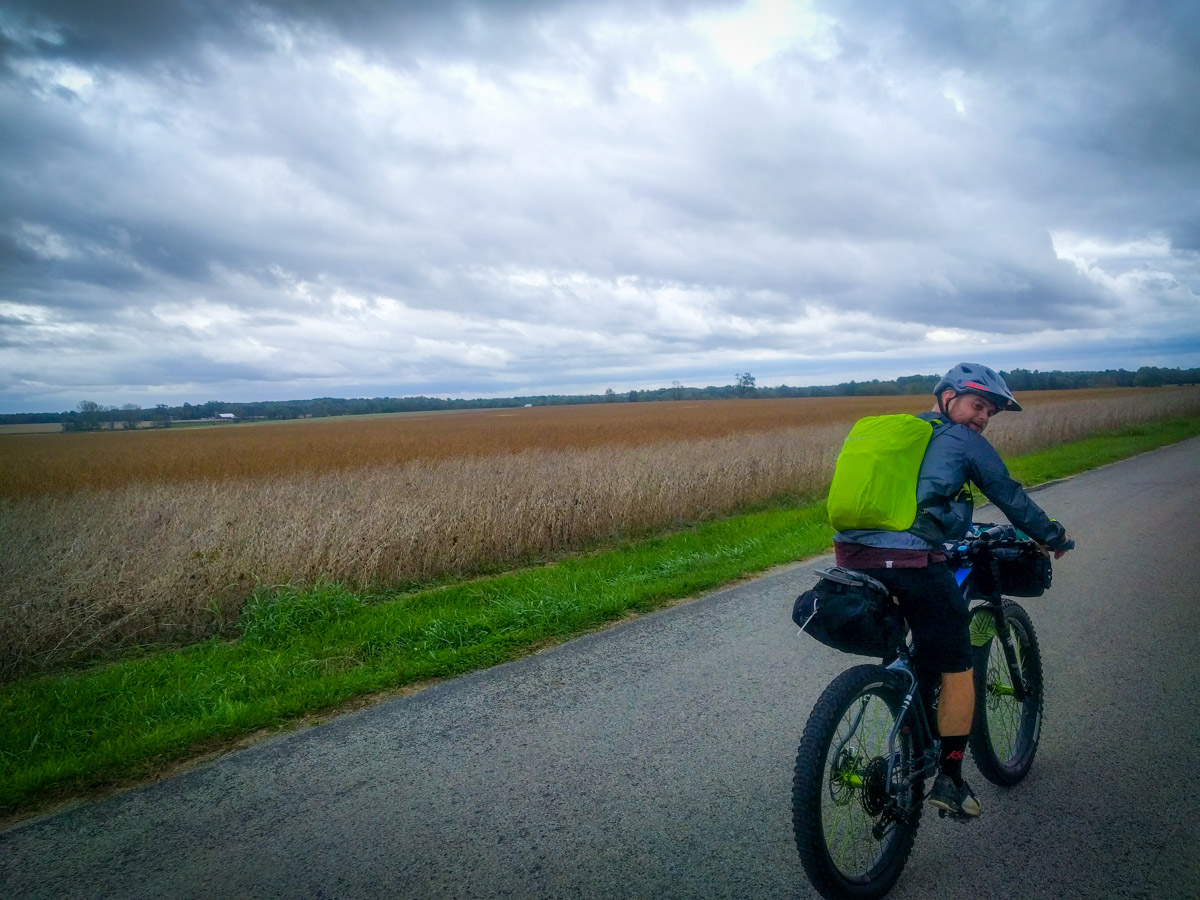 So far, the C7 Gore-Tex Rescue jacket has saved me on a wet-turned-snowy ride in Eugene, OR, a sopping wet seven hour slog through Ainsa, Spain, and a number of rides in between – and every time it’s been the same story. The Gore-Tex shell effortlessly shrugs off the rain and impressed me with its breathability in the process. You don’t really notice how well the jacket breathes until you take it off expecting to be drenched on the inside, only to be mildly damp. That makes a big difference when the temperature drops to dangerous levels and you’re out for a big day.

The lack of any pit zips or venting (other than the chest pocket mesh) may deter some from choosing the C7 Gore-Tex Rescue, but realistically for me it was never a problem. And that’s coming from someone who sweats profusely. Yes, opening the front zipper to regulate your temperature isn’t the most aero option in the world, but it works. And since the jacket breathes better as a whole compared to many other waterproof shells with vents, I can’t say it’s an issue.

I’m also staggered by how durable the shell seems to be. Honestly, it feels so thin that you expect it to tear at the slightest snag but the thorns in Ainsa failed to break the Gore-Tex armor. Everything in Ainsa wants to tear your clothing and skin to shreds from endless thorns to sharp, jagged rocks, and more than a few times I felt the thorns catch on the jacket. However, after each time, I failed to find any holes much to my relief.

If you’re looking for a lightweight, simple jacket to stash in your pack or your jersey for use in a serious rainstorm, the C7 Gore-Tex Rescue jacket is tough to beat. It’s light weight, it’s simple, it works flawlessly, and unless you’re looking for more features, pockets, etc., it seems like it’s well worth the $249.99 price tag. As the name would imply, this jacket is the perfect rescue shell for when the weather really hits the fan, but it’s good enough that it works past the realm of a “rescue” shell and is something you can comfortably wear for longer rides as well.

Note on availability: While you won’t be able to find this jacket on Gore’s website yet, it is available for sale on a few websites across the internet and supposedly through brick and mortar retailers as well. Online, due the name change you’ll still find it listed as the Gore Rescue B, Rescue GTX, or Rescue B GTX/Gore-Tex. When it’s finally listed on the Gore website, it should be called the C7 Gore-Tex Rescue.