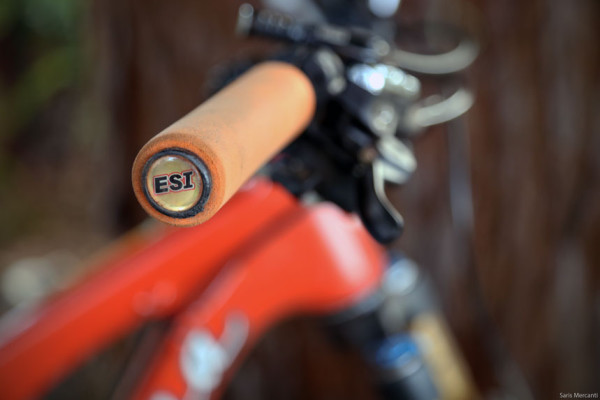 Whether you prefer riding glove-less or like your grips chunky, ESI has been quietly making a variety of grips in a wide assortment of colors for over a decade.

So after hearing nothing but rave reviews for years about the product, I finally picked up a set to try out myself. See how they stack up to lockons after the break.

The ESI grips are simple and with no metal or tiny hardware to strip, they’re incredibly light. The company currently offers three different versions of their grips which differ only in diameter.

Their thinnest grip, the racer’s edge, has an installed diameter or 30mm and weighs a claimed 50 g. On our scale, the grips came in at 52 g with the included bar plugs. For comparison, a standard set of lock on grips usually weighs twice that.

ESI also produces a Chunky and Extra Chunky version which have a 32 and 34mm installed diameter and weigh 60 and 80 g respectively. 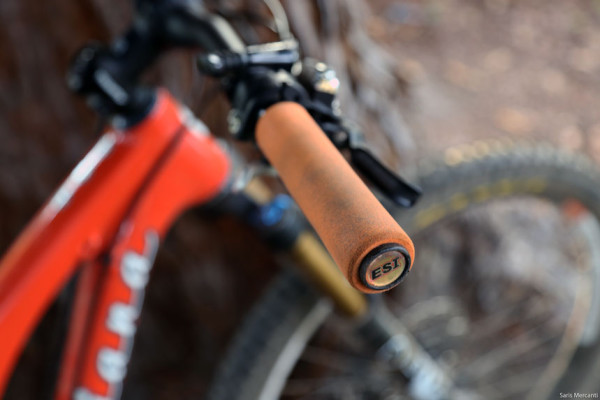 Like a standard Oury grip, it’s best to wipe the handlebar clean and then use either rubbing alcohol, a glass cleaner, or hairspray to help slide the grips on.

When we spoke with ESI, they recommended we cap one end of the grip and pour in a small capful of rubbing alcohol. After swirling the fluid inside the grip, we were told to pour the remaining solution onto the handlebar and slide the grip into place – ensuring that the thickest portion of the grip faced our palms.

The process did take some time to complete but was performed easily without the use of an air compressor. The only downside is that the grips had a tendency to slide until the rubbing alcohol had completely evaporated.

Despite the Racer’s Edge being advertised as their thinnest grip, the ESIs were noticeably larger than ODI Ruffians.

They also lacked the durability of their lock on counterparts. It only took one slow speed tumble to rip the grip up, although the tear hasn’t grown, and is unnoticeable when riding. 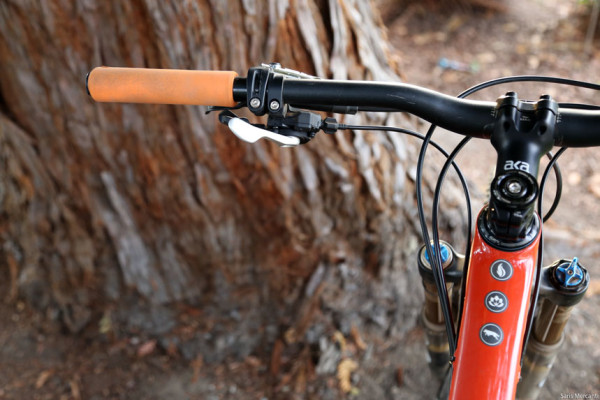 Where the ESI grips shine is in comfort. The extra cushion doesn’t offer the significant improvement in damping as the switch to a carbon bar, but the soft texture is a joy whether you ride with or without gloves. Although they are a little slippery in wet conditions if you choose to go bare handed.

The only downside to the grips is that the removal process is a little involved and they tend to get chewed up in a crash. Aside from those two demerits, the simple silicone grips are versatile enough for everything from commuting to full on trail riding. As an additional benefit, it’s one of the components you can purchase for your mountain bike that’s made entirely in the United States.

Prices for the grips range from $16.99-22.99. You can pick up a set at your local bike shop, or head over to the ESI Grip website to order a set in one of the eight different colors currently offered.

Been using ESI grips since 2008 on trail/xc/dh bikes and haven’t wanted lock-ons since.

With most people having an air compressor in their garage nowadays (if not why, they are under $100 from your local hardware store) it’s a 20 second task to blow on/off ESI grips from your bars without any slippery liquid…simple!

Love my Chunky grips. I had a pair of Ergon GA1s on my carbon bars for awhile and definitely noticed a difference once I made the switch. Since I like my brakes to catch close to the bar, and the Chunky’s are thick, I had to change up the positioning of my levers. But once the grips formed to my hands, I was sold–smooth, comfortable, vibration-free control even through the rough stuff. I hear the Racer’s Edge feel more like riding grip-less.

OK grip, if you plan on changing them 4 to 6 times a year. So make sure you plan ahead and buy 2 or three pairs. Smack your bar on a tree… replace the grip. crash… replace the grip. for the price of two ESI grips i replaced them with Ergon grips and couldn’t be happier.

I have ESIs on all my bikes, but it remains a love / hate relationship.

I have ESI chunks on all my bikes, as well as my kids’ bikes. What are you guys doing to them that require such frequent replacement? I ride 6 days a week, several hours a day, complete with my fair share of spills…yet I have only had to replace one set in 2 years.

Just a little nitpick, but the article keeps mentioning silicon when the grips are silicone. Silicon is a hard, silver metal.

Thanks, HS. We corrected it.

I have use these on two different bikes for over three years and have no issues as described above even after crashes. I use gloves and they work well in wet weather and my hands feel a Thone better than they did on the Ergon grips. Easy on and off w alcohol. Their bar and plugs fall out very easily so I do recommend using something from ODI or hope to lock them in place and protect bar end.

Maybe the Extra Chunky’s are extra tough but despite MANY tumbles and tree checks, my grips don’t have a single cut or chunk missing. The trail nearest my house is super tight and SUPER rocky, which leads to the aforementioned mishaps. Again, my Extra Chunky’s are still good as new.

I tell people that they’re “tacky, not sticky”.

And I agree with JG. A pancake air compressor is a must in any home garage. Makes grip installation and removal a 20 second task.

For me are OURY Grips best Grips ever with Grip Shift !

They get a 10 rating from me. Put them on my Niner and haven given them a second thought. A year later they still look new after heavy use.

I love my extra chunky ESI grips. Big hands, big grips, not big grams. I have taken some hard spills with no issues except popping the bar end a bit. As they start to wear, you just rotate them.

Anyone use these things for downhilling?

I’m with my first pair of Racer’s Edge and definitely, these are the best grips I’ve ever ridden with.
I use to ride under the rain more than I’d like to, and these are the best in terms of bar gripping. No slides at all. With the Ritchey WCS(I like them a lot),under pouring rain, one of the grips even came off the handlebar!

Ride without glove and rocks in your palms?

I’ve been using them on my DH bike for the last two seasons with nothing but good things to say. Sore hands are almost a memory, grip is great, no movement, no lock-on clamps to eat into your palms, and light weight to boot. Just run a quality end plug like the ODI bmx ones or any other that covers the entire diameter of the grip…they will tear up on the ends otherwise.

Ritchey makes two or three foam grips which are both cheaper and lighter than these. I run the WCS True grips and customize them with a Dremel tool to deal with pressure point hand issues.