We took the Fezzari Delano Peak to two big mountain bike trails to see if this mid-travel trail bike could handle the rough stuff. Then we ripped it around our local XC trails to see how it pedaled. The result? Lots and lots of good times on a bike that pedals efficiently and can take on more than the travel numbers would suggest.

If you’re looking for a great all ’round trail bike to tackle any sort of mountain biking, this one’s worth a look. Here’s why…

We took the Delano Peak around our home trails in Greensboro to get acquainted with it, then hit the road to ride the amazing new Monument Trails Mt. Nebo in Arkansas. On the way home, we rode the North Mills trails in Pisgah, just outside Asheville, NC. Between them, we found massive rock gardens, natural trails with plenty of roots and rocks, long climbs and short punchy ones, and everything in between.

In other words, lots of real mountain biking, and lots of variety to test the bike on all the things. It came out fine, and we came away wanting more! Tech details below, followed by a few more thoughts on its ride qualities, plus actual weights. Launched in mid-summer 2020, the Fezzari Delano Peak is their idea of the do-it-all trail bike. You can check out the launch coverage for geometry, models and pricing, and the basic info.

We reviewed the Delano Peak Elite model. At $4,499, there are more models sitting above it in the lineup than below. For the price, the spec is solid, and there’s not much reason to upgrade except to save a bit of weight, get carbon rims, or get SRAM’s wireless shifting. Functionally, this XT-spec’d model hits all the important notes. The frame is the same across all price points and comes in this pink/salmon/fuschia color that consistently received compliments. It’s also available as a frameset for $2,299 and comes in S/M/L/XL sizing. Fezzari’s cable management uses internal routing on the front triangle, with ample openings for easy routing and bolt-on covers to keep things from rattling. It works, I heard nothing smacking around inside the frame during the test.

That said, there was a unique sound to the bike as it bounded through rock gardens…nothing bad, and I’m failing with words to describe it, just a subtle reminder that you’re on rough terrain. 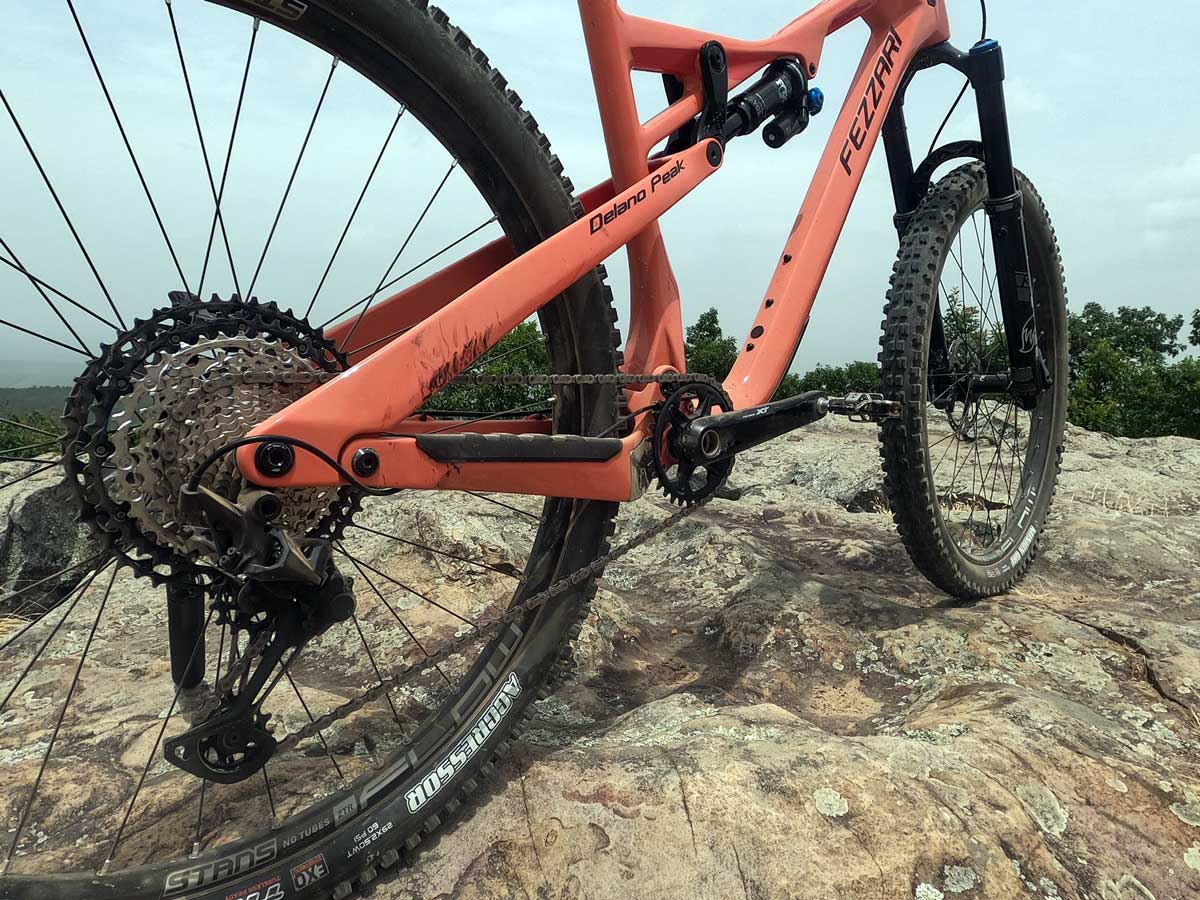 The “Trail Bike” category is hard to define, counting bikes from 120mm up to 150mm travel in its ranks. The Delano Peak sits at the more aggressive end of that for two reasons.

Second, the suspension is overpowered. Not only do you get a full 150mm travel up front, but the Fox 36 fork spec and DPX2 shock give you all the stiffness, damping and downhill performance you could ever need on a bike in this category. The 2.5″ tires have all the grip you’ll need, too. They max out the tire clearance, but after riding it on so many different types of trail and terrain, I don’t suspect you’d need or want anything bigger (after all, this is a bike you still have to climb with, and these are not light tires). Two more highlights: First, their GA (for Geometry Adjust) link lets you adjust the shock’s lower mount position to change the bottom bracket height and head angle slightly. As with most bikes, I kept in in low position and it worked great.

Second is the geometry itself. Fezzari went to extremes with their longer travel La Sal Peak enduro bike, and it seemed to work. So they kept the very steep 77.5º seat angle across all frame sizes. This put me over the pedals for powerful accelerations, and kept my weight balanced for traction and power on the climbs.

But, it has a slack 65º head angle for stability and control on the descents. Once the saddle is dropped, it’s easy to get behind it and that tall seat angle no longer matters. Basically, best of both worlds whether climbing or descending. But yes, it does look a little odd still. This much bike means a bit more weight. The Size XL Delano Peak weighs in at 31.44lb (14.26kg). There are a few easy ways to save weight, like switching to a carbon handlebar, foam grips, or carbon rail saddle…but dropping much weight from this bike and XT build would take serious coin. It’s a bit heavier than I’d like, but… Despite the heft, it rides lighter than the scale suggests. I found it easy to pop off lips and jumps, with a generally fast and playful demeanor. For a bike this big, it’s also easy to pedal all day on those big up-and-down-the-mountain adventures.

Mt. Nebo and Pisgah both require long, sustained climbs to get to the good stuff. I like to just leave my suspension in the open setting so it can do it’s job, relying on a bike’s kinematics to keep things efficient when they should be, but otherwise open and ready for action.

As you can see in the video, this bike climbs very well, whether seated and chugging along, or standing to power through rough stuff. All with the fork and shock set to full open. The bike works just as well when the incline becomes decline, with suspension to spare in most cases. I don’t have action pics from the bigger trails, but rocks like these are no problem. Bigger, more continuous rocks are no problem. Drops and jumps? No problem there, either. The Delano Peak’s suspension tune prevented hard bottom out and kept landings well controlled. Bottom line: The Delano Peak shows just how far Fezzari’s designs have come. It’s a mix of overly modern geometry with a killer parts spec, fast handling, stiff frame, and category-topping levels of suspension. And all at a hard to beat price. Definitely worth a look if you need one mountain bike that’s ready for most any trail you’ll throw at it.

Is this the only color? It might work for some, but to me, that color is hideous. Other than the color…and weight, this seems like a nice bike.

There is a nice deep blue color as well.

Just a heads up Tyler and Bikerumor readers – Lifting or hanging a bike by the saddle while the dropper is down will damage it. Best to only do so with it fully extended.

Good to see I’m not the only one that rubs heels on the `stays….

Great review! I have been riding my Delano for about 6 weeks now, and it packs some serious fun. I thought a lot about the compromise between “weight” and “travel” and decided on Delano instead of an XC rig. Someday, I will get a separate gravel bike to cover all my biking needs 🙂

I have a bkue one on order with the enve wheels. Can’t wait to get my hands on it