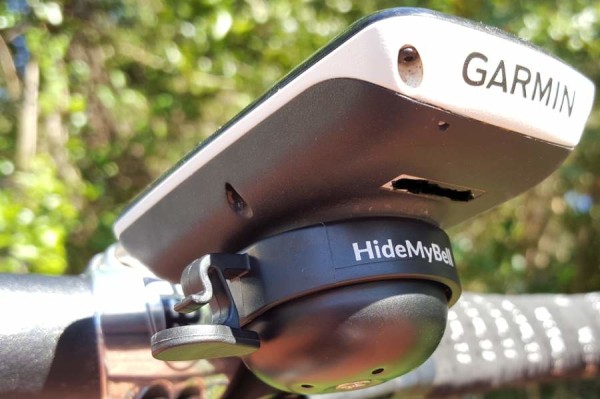 If you’re a cyclist who appreciates the functionality of a bell aboard one’s bicycle, there are many options to choose from. However, many bell designs contribute to the already busy handlebar / cockpit area, especially when combined with a modern cycling computer such as a Garmin Edge device. The HideMyBell Garmin Edge compatible mount does just as its name implies – it integrates a bell and out-front Garmin mount into one unit. Ring through for more… 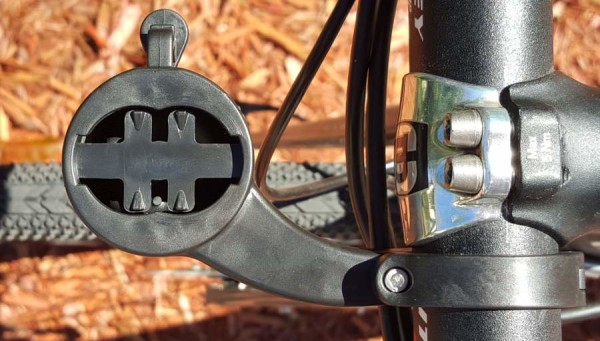 During a training ride, the idea of HideMyBell came to be when designer and owner Mathijs Wagenaar, wondered if a clean, integrated and lightweight option was possible for mounting a bell on his bicycle. After research and careful design, the images you see here are representative of the solution to his problem. 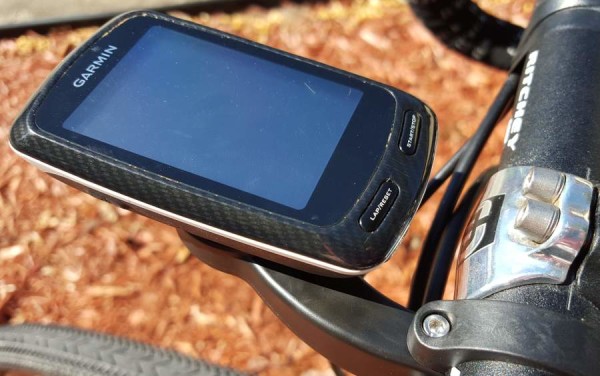 Constructed from a durable polymer material, the HideMyBell weighs 46 grams – and unlike many Garmin out-front mounts, HideMyBell is meant to be installed to the left of one’s stem. If you’re a Shimano Di2 owner who uses the satellite climbing shifter for the rear derailleur, you’ll appreciate a Garmin mount that mounts on the left side of the stem! 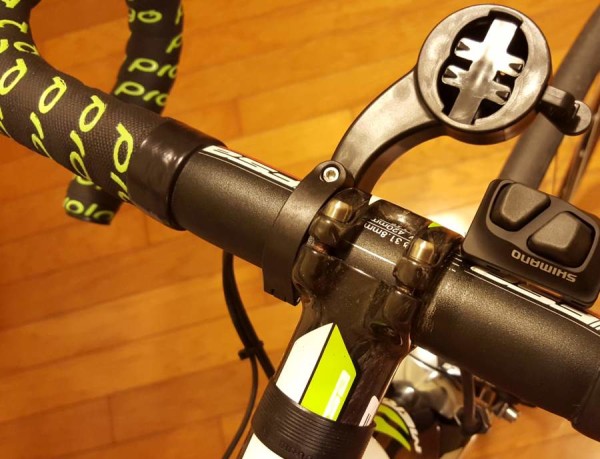 The device has two mount options, first and second (or front and rear, depending on your chosen vernacular), which are meant for compatibility for various devices in the relevant position. The first position, closest to the handlebar is for Garmin Edge 20, 25, 200, 500, 520, 800, 810, Touring and Wahoo RFLKT. The second position, furthest from the handlebar is for Garmin Edge 1000 / Explore.

HideMyBell is compatible with standard 31.8mm road handlebars, but I was able to shim it with some rubber strips from various old cycling computers, to work with 26mm road handlbars as well. HideMyBell is simple to install – open the clamp, install around the handlebar and tighten the stainless steel M3 bolt to 5Nm. Done.

To activate the bell, simply pull and release the clapper, which resides on the right side of the unit. It takes only a couple of times of using the bell, to instinctively flick the clapper while keeping eyes on the road ahead. The bell rings at 85 decibels within a range of five meters.

The bell itself is made from aluminum and weighs a paltry two grams, with four drain holes so rainwater can flow away. 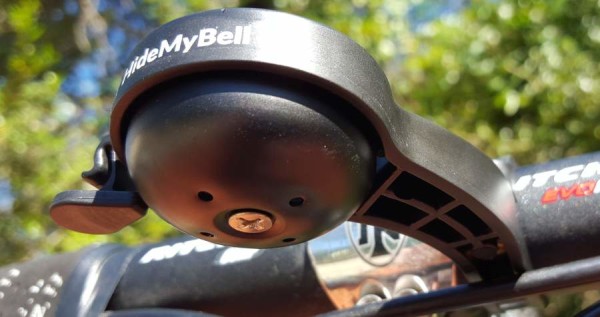 Priced at €29,95 – approximately $US 32.00 at the time of writing – which includes standard shipping worldwide, HideMyBell is a well priced and clever design, and will appeal to those who don’t like the aesthetics of a regular bicycle bell, or despise clutter around their handlebar.

Not to be negative, but that’s a pretty bad location for a bell if you ask me.

This is actually cheaper than Garmin or K-Edge mounts for the large Garmin 1000, and puts the computer below bar level so you can balance the bike upside down for work without damaging the screen. I bought one for a touring bike, and it’s pretty solid. The bell works as well as any other I’ve seen.

@will, where would be a better position for a hidden bell? I think this is a great idea.

They are going after a very small niche market.

I live in an area where a bell is required by law. Putting it under my garmin is perfect. I would never use it anyway so accessibility really doesn’t matter. If it works as well as other mounts I’m in!

The location of the bell itself is fine, it’s just that having to reach to the centerline of the bar to flick the dinger bit would be a bit awkward. I like having a bell where I can get at it easier.

I don’t want to be positive, but it’s a clever idea and I would get one.

So you flick the little ringer upwards? I have an “out front” mount for my GPS and it seems to me that would be an awkward motion, to have to move my hand from the bar out front over the center and turn my hand to flick the bell. Maybe I’m not understanding how it works, but this doesn’t seem to be the easiest bell to use.

Also, I disagree with the notion of $32 being “well priced”. I guess if you compare to the ridiculously priced K Edge, but my generic out front mount was like $5. Add a bell, and maybe double the price. New product, and add a few more bucks, still seems like $32 is a bit much. Then again, in the world of cycling, $32 is chump change lol!

I already own a Hidemybell, and love it so far. The bell is loud enough, and the placing of the mount is better (lower) than the mount I had before. Now the screen of my GPS unit sits on equal height with my stem, which gives it a more sleek look.

The upwards movement of the ringer isn’t an awkward motion at all, as it is easier to reach that way without touching your GPS device. Indeed you have to get used to the central placing of the bell on your stem, but hasn’t posed a problem to me at all and gets instinctive very quickly. And I do use my bell often, as in Holland the cyclepaths are getting more crowded every year.

The pricing seems steep, but on the other end this is more of a niche product and compared to other mounts the pricing is ok. I couldn’t make one myself for that kind of money.

It’s a fine idea, but maybe as a general rule don’t write in contrasting letters “Hide my X” on something when it’s goal is to hide your X…?

Yes, ‘cos I need my bell to be instantly accessible so that the driver in the sealed up car on his cell phone can hear my threatening ring-a-ding, and having it near my Garmin doesn’t make sense as it’s so awkward to use the Garmin buttons that I never adjust screens, so how would I ever reach a little thumb tab?

No, what I need a bell for is to avoid the $105 fine for not having a fairly useless warning device cluttering up my bar. Neat solution.

Perfectly fine product, and although not cheap (honestly: nothing bike-related is cheap) the price isn’t all that crazy, especially for a ‘low scale produced’ product: Add up the prices of a nice bell and a nice out front Garmin mount and you’d be cheaper off buying this. I’ll admit I paid triple this for a Barfly 2.0 SLi + a Spurcycle bell (triple x2, because 2 bikes).

Plus, as others have commented as well: In the Netherlands you mainly get a bell because it’s the law (just one fine is more expensive than a bell) or because other road users yell and cuss if you don’t have one. You don’t get it for some magical wonders a bell supposedly does for safety: Cars won’t hear you anyway, and cyclists, pedestrians or animals typically are startled by the *ding* and/or look over their shoulder (why, ffs?!) resulting in crazy dangerous movements.

To bad I already have a GoPro mount at that exact ‘hidden’ position. Otherwise I would surely get 2

This looks like it pictured with a 520?
Does it also place a 1000 far enough forward to access the USB port to charge via dynamo?
(Out of the box mount places usb port above handlebar)

@craig – I have this mount and a Garmin 1000. The mounting arm is on the left and there is tons of clearance on the right under the charging port. It sits forward of and below the top of the handlebar.

When it becomes necessary to hide your bike bell, then the terrorist have already won!

You never take your hand off the bars.