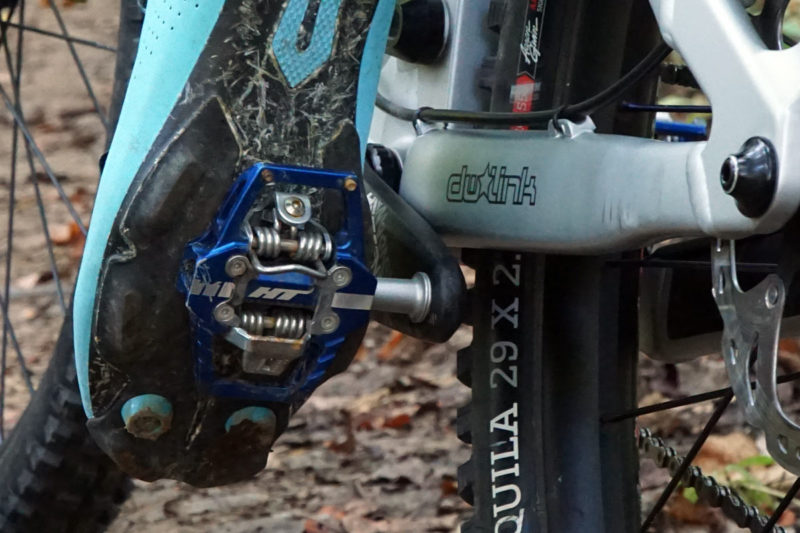 Amongst pedals, there are a lot of smaller XC pedals, and there are a lot of big platform pedals. But only a few brands are making something in between, and fewer still have something quite like the HT Components T1. The T1 combines just the right amount of surface area to support your foot on sketchy restarts and rough terrain, with just enough pins to keep them there in the unlikely event you come unclipped. Here’s why we liked them… 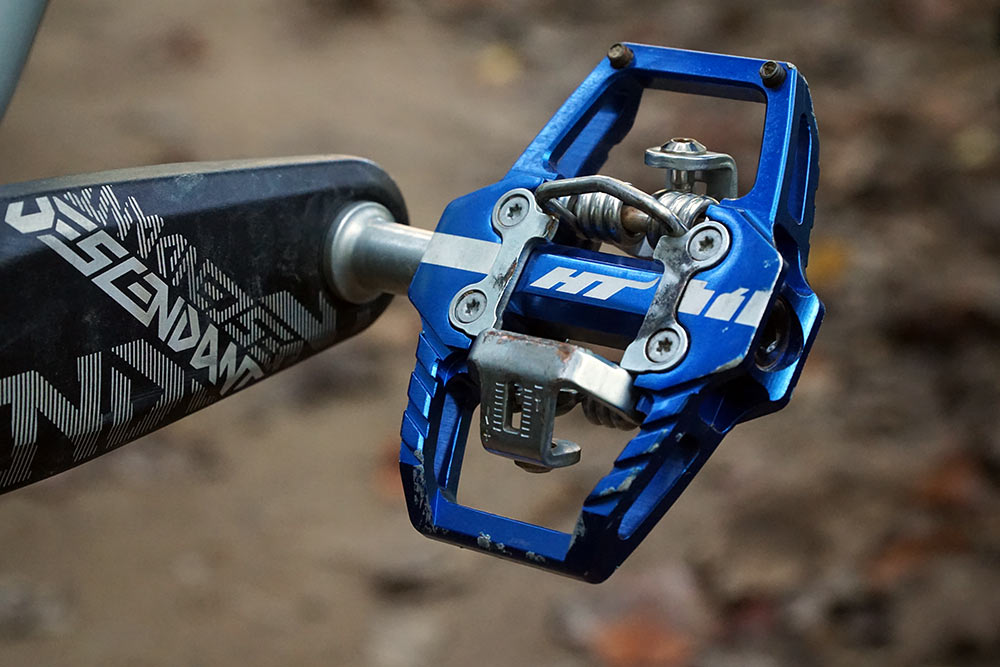 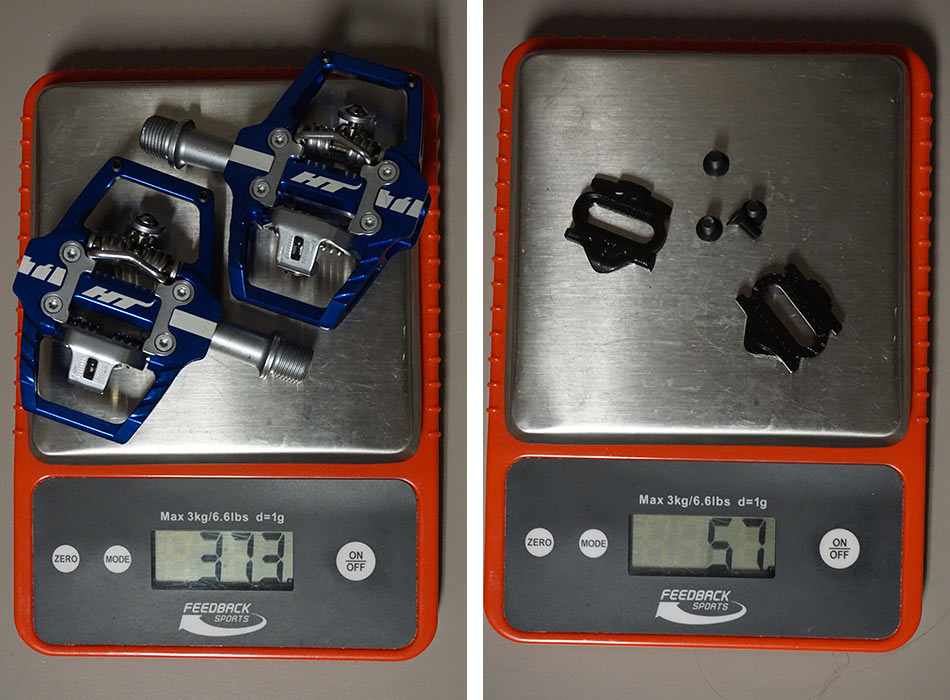 A pair of pedals comes in at 373g (claimed weight is 368g), and two cleats with screws come in at 57g (but I forgot to weigh the bolt supports, shown below, which add a few more grams…claimed cleat system weight with those is 64g). 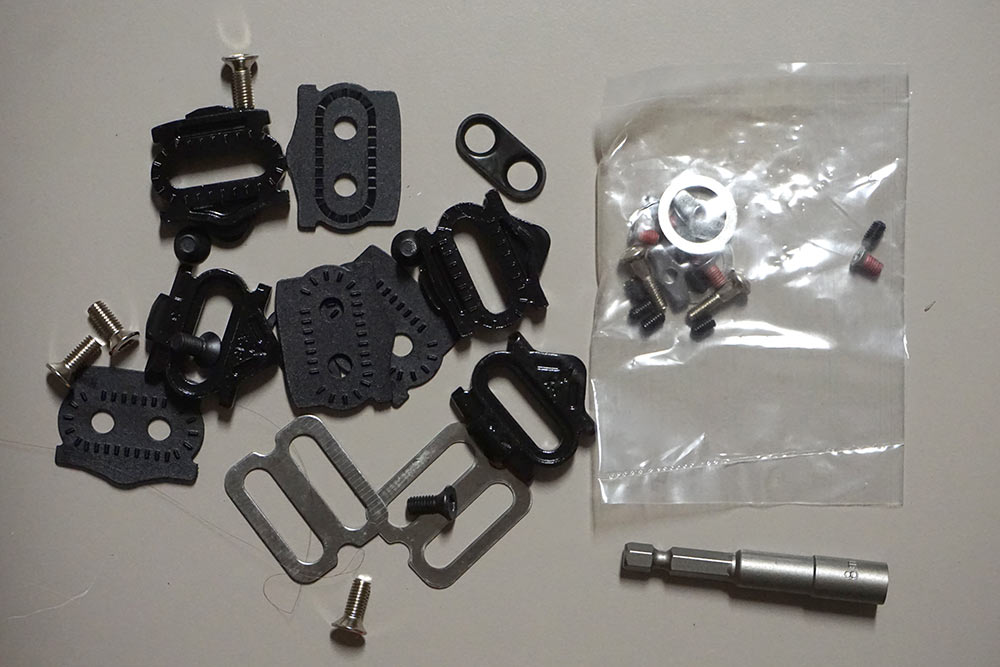 The pedals come with metal and plastic spacers, extra pins, two different sets of bolts (short and long), and a rebuild tool for pulling the spindle out. They also come with two different cleats: 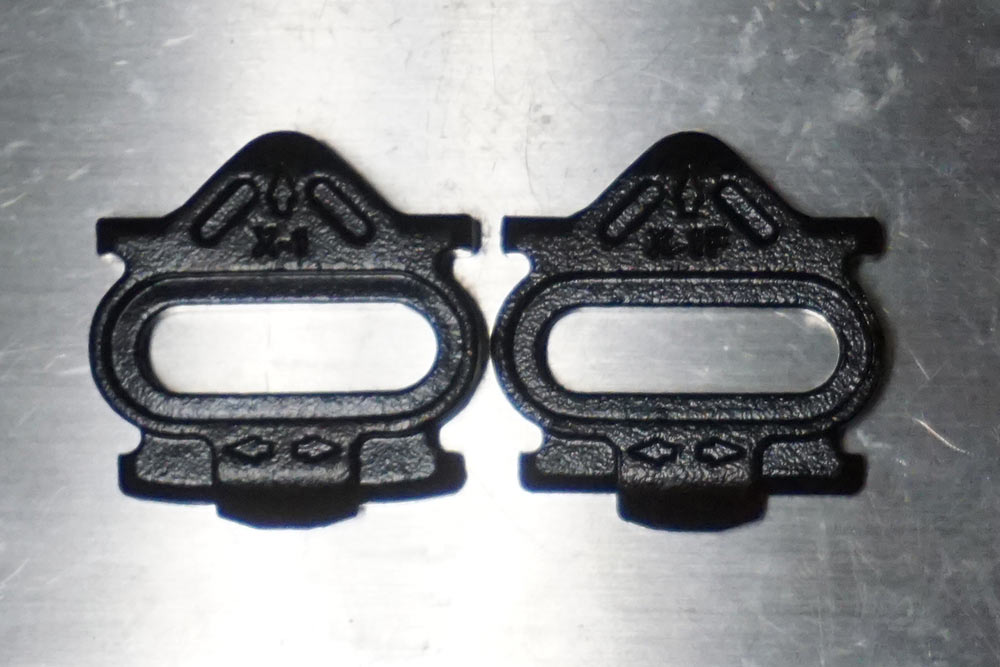 HT Components offers four different cleat designs, but with the T1 you get the X-1 (left) and X-1F (right). Note the difference on the bottom (back) of the cleat. These subtle shaping differences give you 4º and 8º of float respectively. 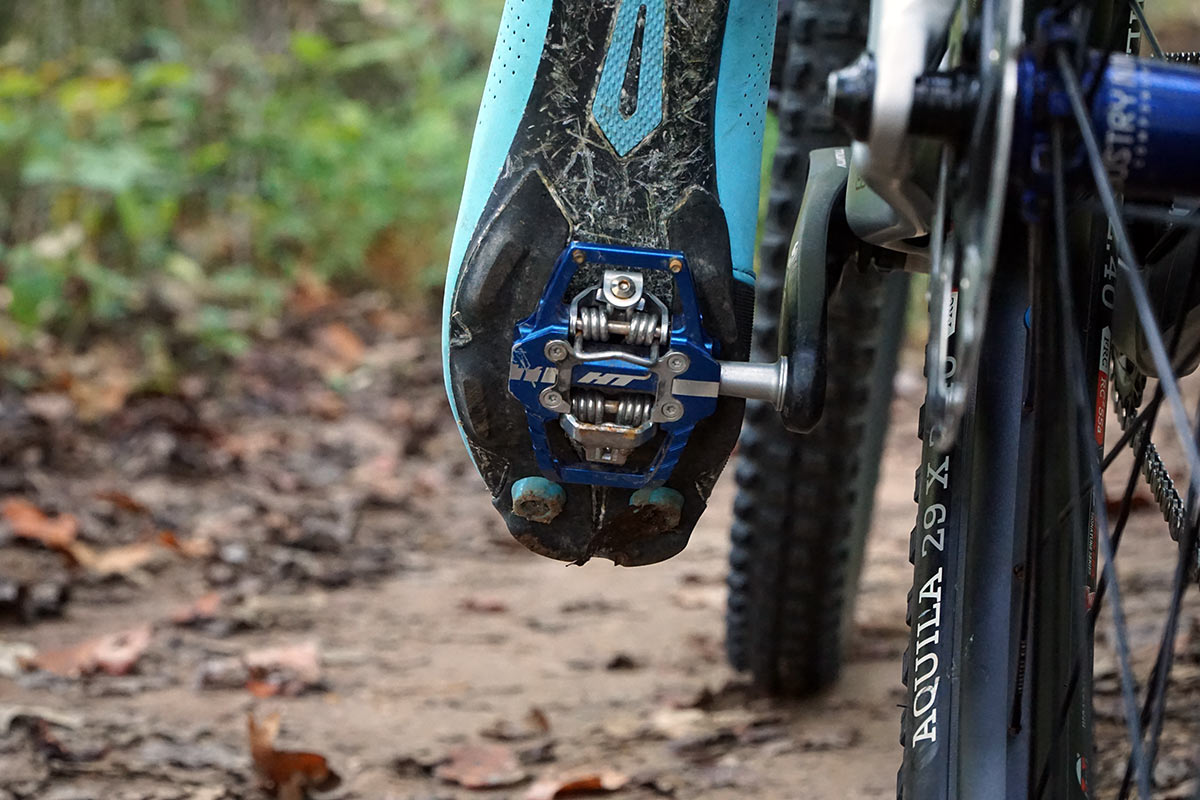 We installed the T1s on the new Ibis Ripmo AF for our trip to eastern Tennessee, where we rode Knoxville’s Urban Wilderness trail network, Windrock Bike Park, and the new Tannery Knobs Mountain Bike Park in Johnson City. Full disclosure, HT provided financial sponsorship for our trip. So we chose the T1 specifically because they split the difference between the flowing pedally sections and climbing we knew we were in for, and the long, fast, and often technical descents as our reward.

Watts wore Giro Cylinder shoes, and I wore FiveTen Kestrel Lace shoes, and the pedals worked great on both. Since then, I’ve hit our local trails on them using Bontrager’s top-level XC race shoes, too. Meaning, they work great whether you’re wearing race shoes with harder tread blocks, or flatter DH/park shoes. Further down are the rest of my impressions, but first… 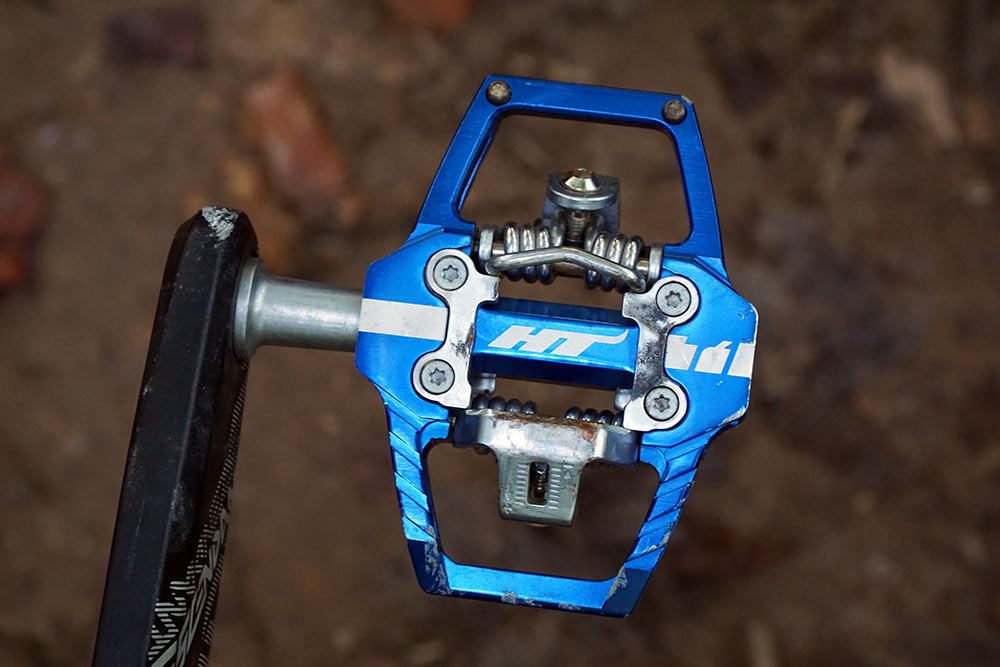 Did you like the platform size? How did it feel under your feet for the type of riding we did?

Platform was great. During filming, there were multiple times that we would stop and start on semi-technical sections where there wasn’t enough time to get clipped in before hitting “the s#!t.” So the large platform was perfect for comfortably faking it till I made it.

Were they easy or hard to get into and out of?

They were very easy to get into, which was great, as we stopped and started A LOT during filming. But even with the ease of getting in, once clipped in, the hold was solid. I only accidentally unclipped once, during a fast, s#!tty rock descent, but that was my fault.

Compared to your SPD pedals, did you like them better or worse? Or the same?

Did you adjust the cleat tension at all?

Would you keep using these pedals or consider trying their smaller ones for XC? As in, were there enough “pros” to make you consider them for your next pedal?

I actually asked if I could keep these.

Any other thoughts about the pedals?

The name is… boring? 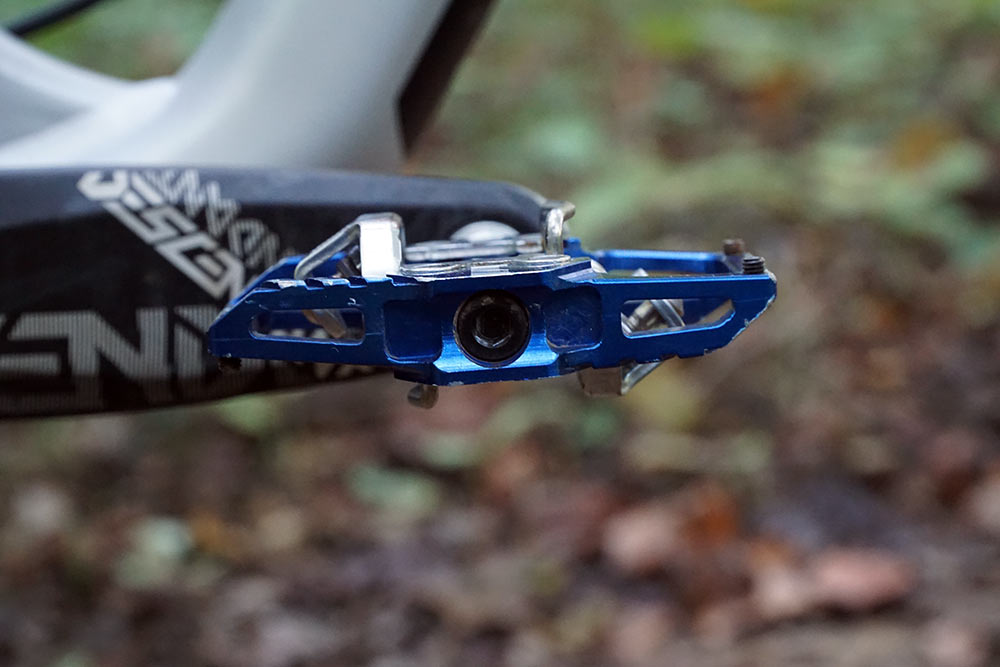 OK, back to the technical review. Amongst mid-sized platform pedals, few if any have pins. The T1 does. Which provides just a bit more grip when wearing FiveTen-style shoes, with no downside when wearing normal mountain bike shoes. They’re removable, which means they’re also height adjustable and replaceable.

They have a thin profile, with the alloy body’s stack height only barely taller than the chromoly spindle’s diameter. They roll smoothly on a sealed bearing and IGUS bushing combo. Actual dimensions are 68 x 83.5 x 16.8 mm, with a 56mm Q-factor.

The slim shaping and the fact that it sits inside the borders of your shoe’s outsole means I almost never clip them on the ground. It takes a special kind of rock garden to make that happen, and when it does, my foot still sticks in the pedal. 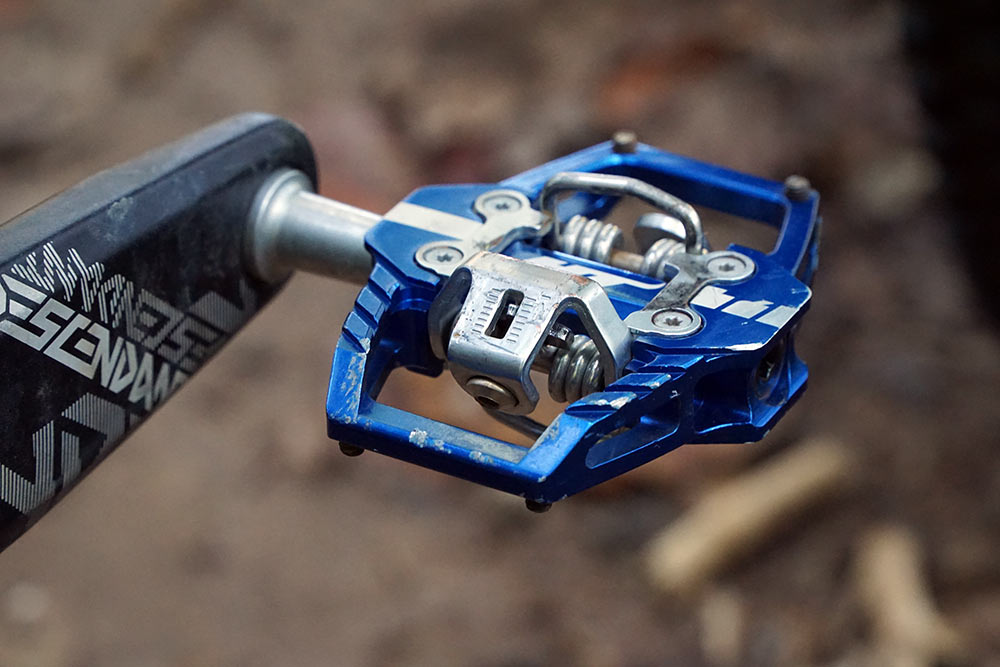 Watts may not have used the tension adjustment, but I did. This is another standout for HT components’ pedals…theres a massive tension adjustment range. Just starting with clipless pedals? You can set them so light that they’re incredibly easy to get out of. Racing pro? They’ll turn so tight that it takes a little extra ankle effort to get out.

For me, the compact but supportive size, reasonably good weight, and secure grip mean these are my go-to pedals on most every mountain bike press trip. And I run them (and have been running them for years) on most of my home mountain bike rides, too.

They’re available in a massive FIFTEEN different colors, including a sick gunmetal gray and a stealthy matte black. Retail is $135-159 depending on color.

I bought this two seasons ago with big hopes, but they were a let down. I wore the bushings out in less than one season. I found them very hard to unclip from. It wasn’t that the tension was too strong (although, you will break your knee trying to get out when the tension is at max), it was more the shaping of the cleat (speculation). I would twist as far as I could, I’d still be in the pedal, and have to turn past what was physically comfortable. I’m assuming the failure of the bushings was partly due to the force required to unclip, torquing the pedal body. I had mine setup super light too.

Can you get into them as per Time and Crank Bros – stamp down into them? Ease of entry compared to, say, Eggbeater?

No. They work like spd pedals do, toe first.

As a long time Time user, these pale in comparison. I went back to Times and haven’t looked back. I replaced the T1’s with some new MX12’s.

+1 For these pedals. Been running a couple sets for 2 years after having issues with SPDs staying clipped in. No durability issues and haven’t unclipped unwantedly. Cleat position and tension settings are very important people, read the instructions or visit a fitter.