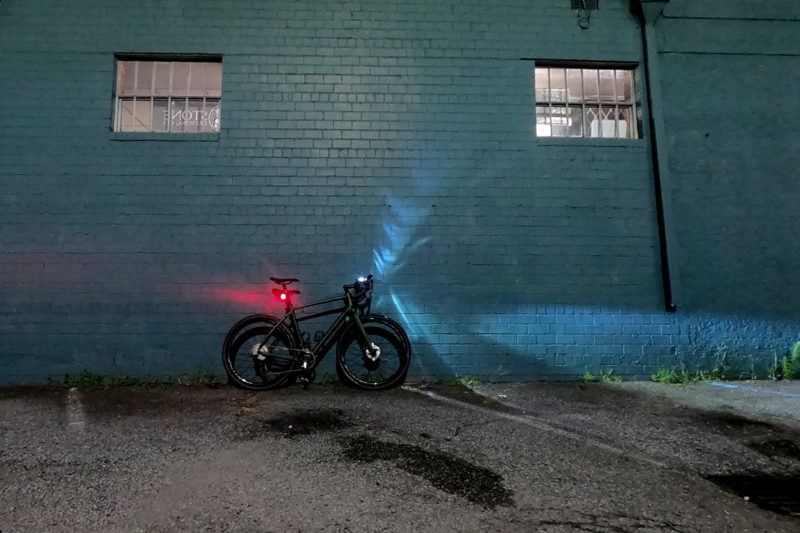 Whether for commuting or night riding on trails, most of us are familiar with lumen output for our bike lights. So when Kryptonite’s new Incite lights dropped with Lux as the primary selling point, we figured it’d be better to show you how they stack, er, light up on the road.

If you’re commuting on dark streets, or just want something to increase your visibility to others during the day, this video and review will show you the best bike lights for each use case from Kryptonite’s interesting new line… 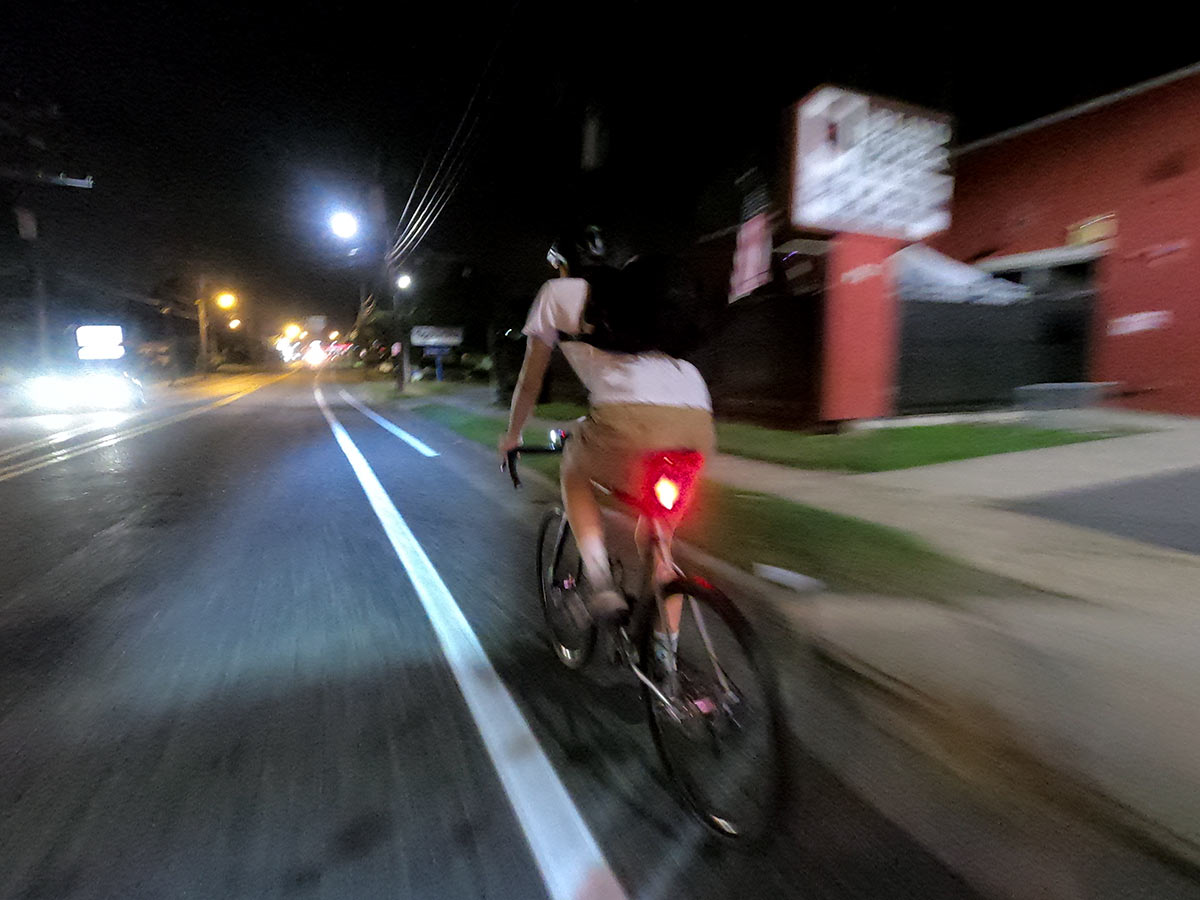 We covered the tech specs in great detail, along with Kryptonite’s explainer graphics and their own videos in our launch coverage. Check that out for full specs. The line includes three headlights (X3, X6, and X8) and two taillights, one with an accelerometer-based brake light (that’s the one we reviewed here, see it in action in the video). 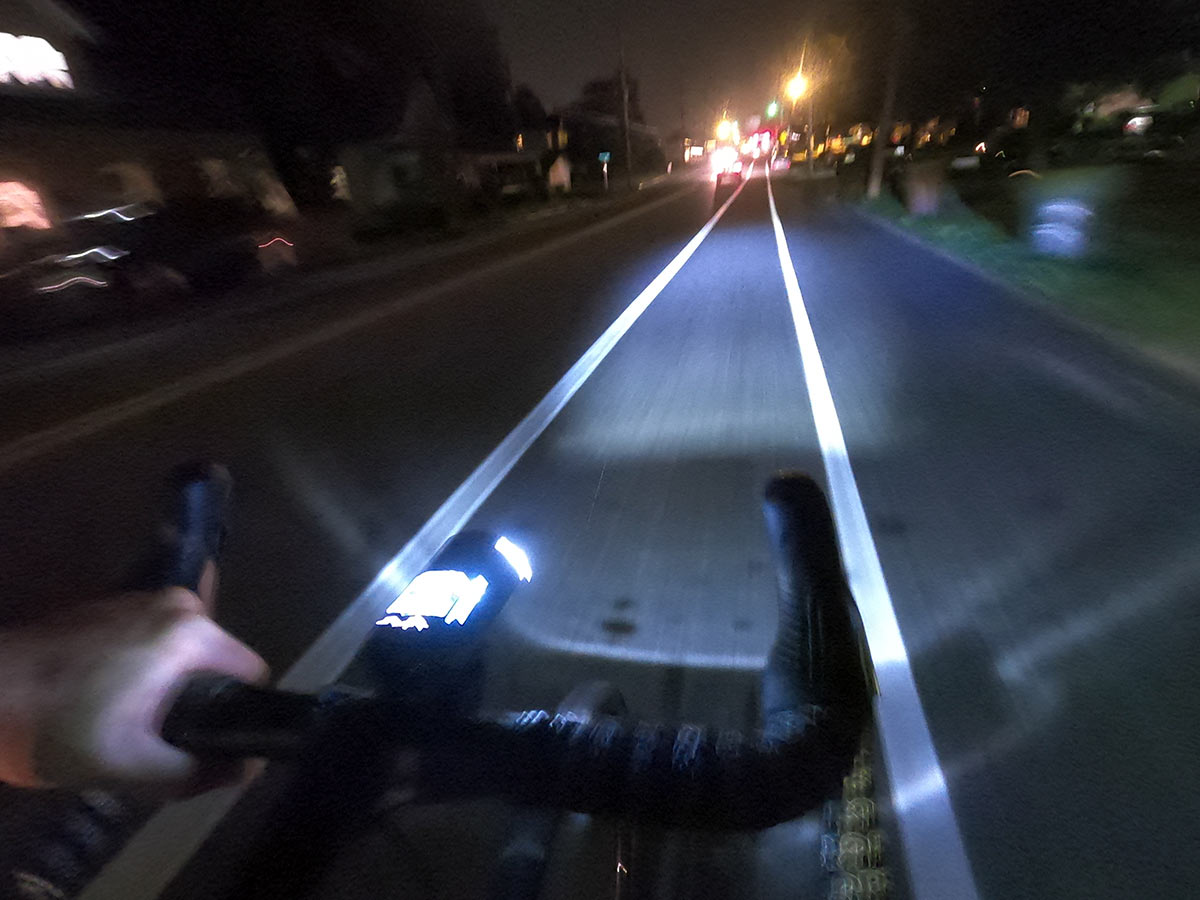 One thing we noticed is that the modes and beam patterns differ enough between the different models that they each kinda stand on their own, and we found that each really does shine (pun intended) in it’s own light (yep, sorry). 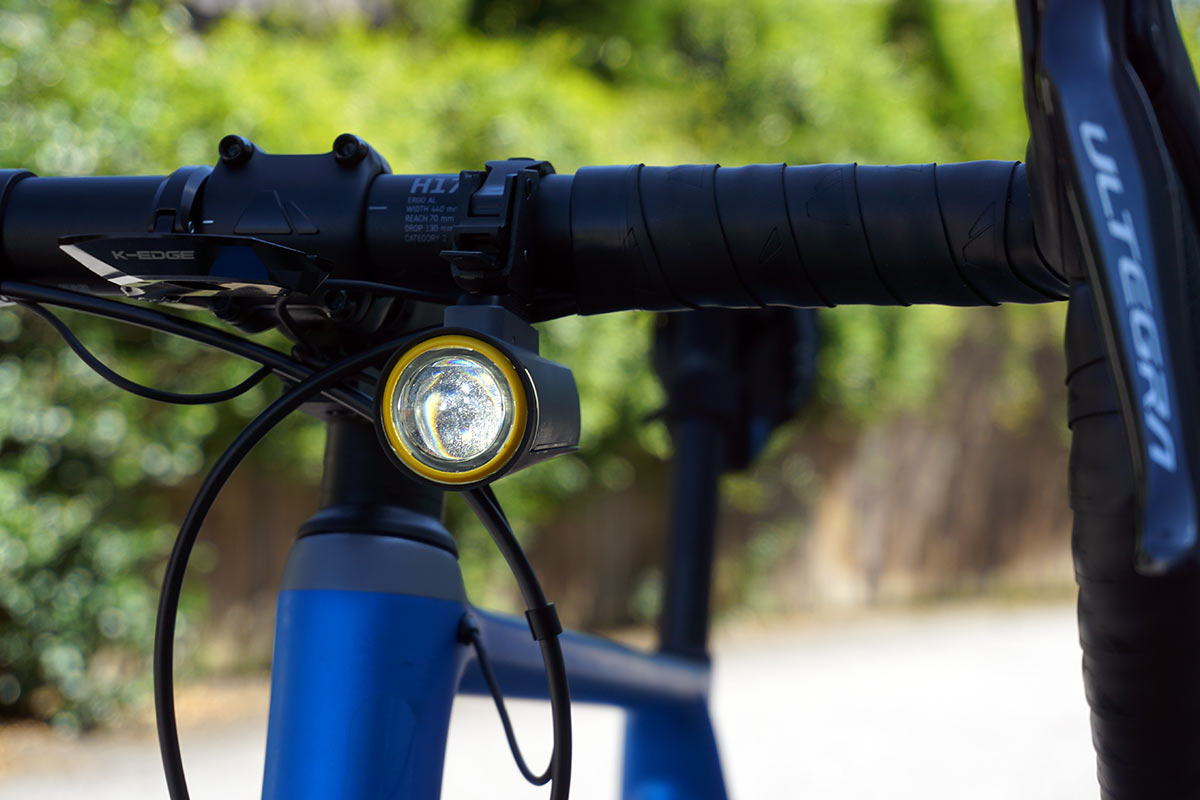 Starting with the most affordable Incite X3, this $55 light has an impressive 24-hour run time on it’s lowest setting. A four-hour High runtime is equally impressive, and that’s where you’d want it at night. We rode three consecutive 7-9 hour days on blinking mode and never had to charge it. The modes are:

I found that the flash and pulse modes were perfect for daytime use. And the X3’s smaller size and flat mounting band made it easy to install under the bar and still have a smooth surface for resting my hands.

It’s worth noting that all three models use a particular beam pattern that won’t work well at night if the light is mounted upside down. You’ll see why in a sec… 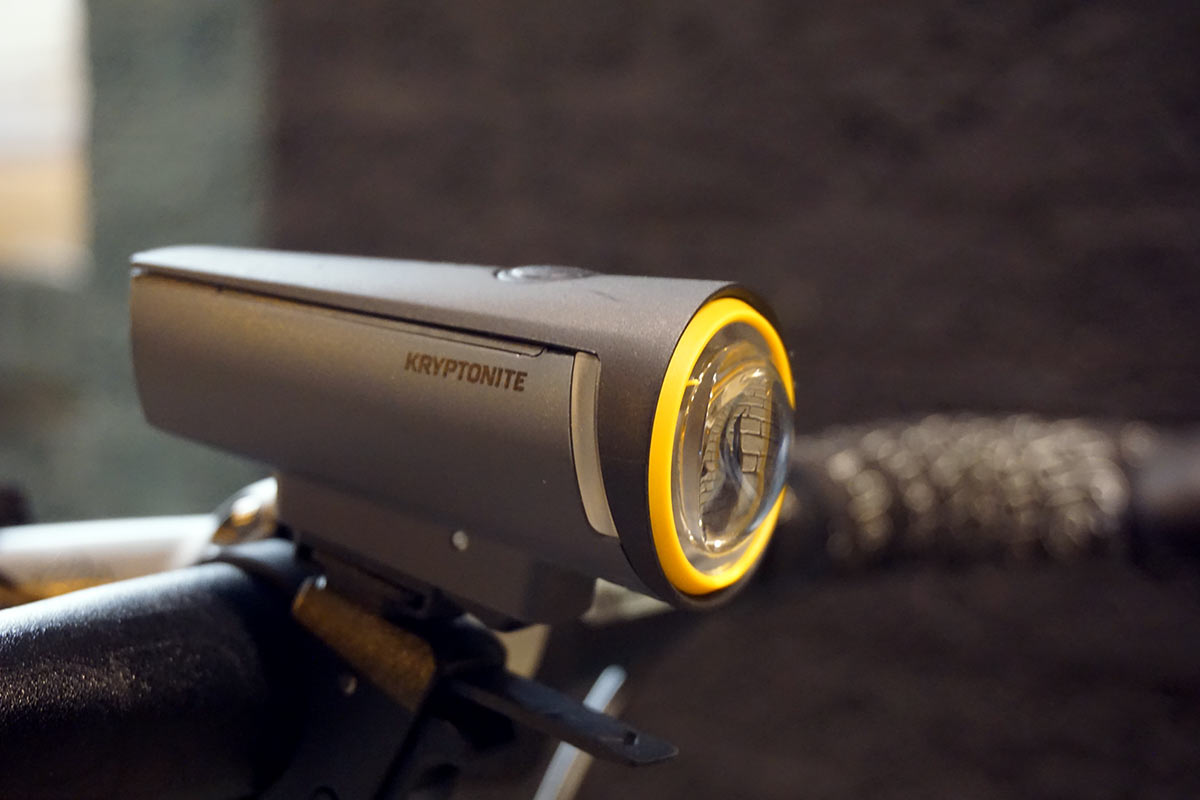 The Kryptonite X3 Headlight is simple, with a single on/off/mode button on top and three small red LEDs to show the remaining battery charge. You’ll notice as we get to the other lights that the purpose of similar features varies in their purpose on each model, so again, while this and the X6 look similar, they’re really not. 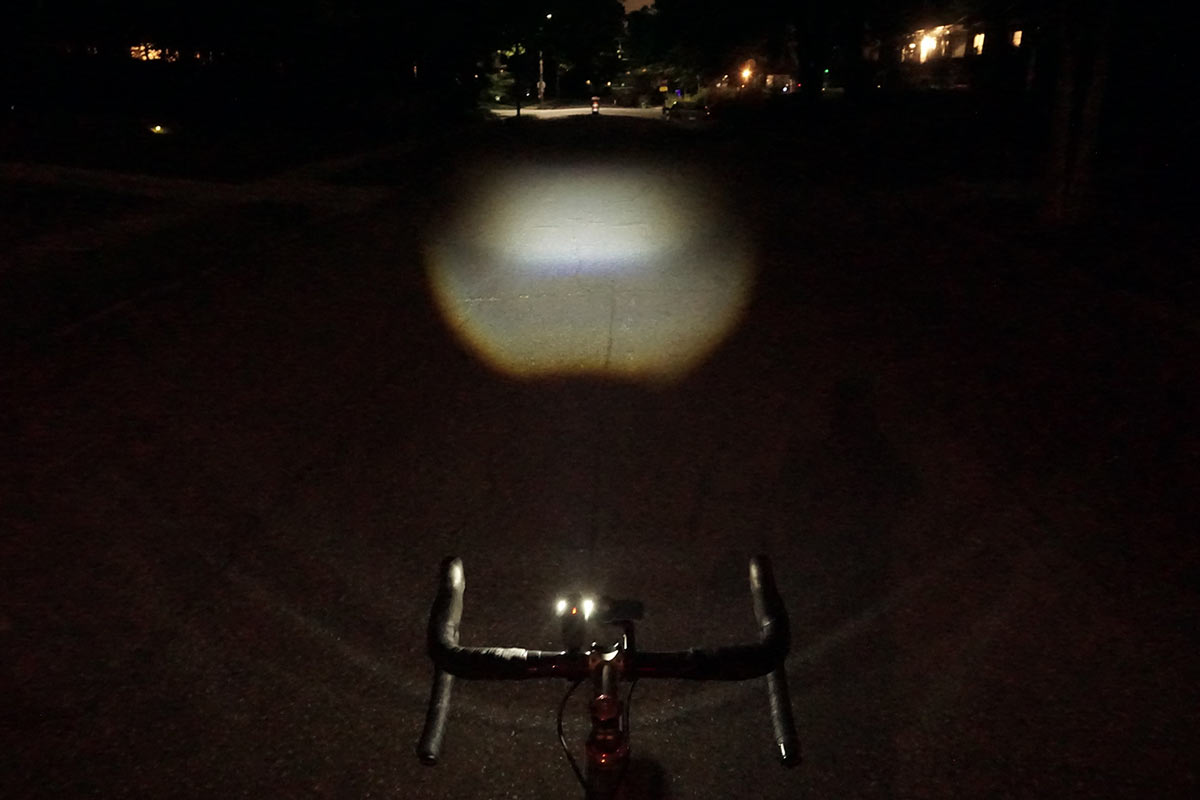 The X3 has a 60 Lux beam with a bright spot at the front (which is why it and the others won’t have the intended illumination pattern at night when mounted upside down), and a dimmer, broader patch closer to your wheel.

Note that the breadth and brightness will also depend on how you angle the lights. All three use a brighter spot at the front, albeit in very different shapes, so how you use that is up to your speed and riding situation.

For me, the X3 Headlight is best suited to being visible over being able to see where you’re going. It’s not as bright, nor is the beam pattern as big, as its siblings. But for under-the-bar daytime use, that’ll get you home safely if things run late, it’s perfect. 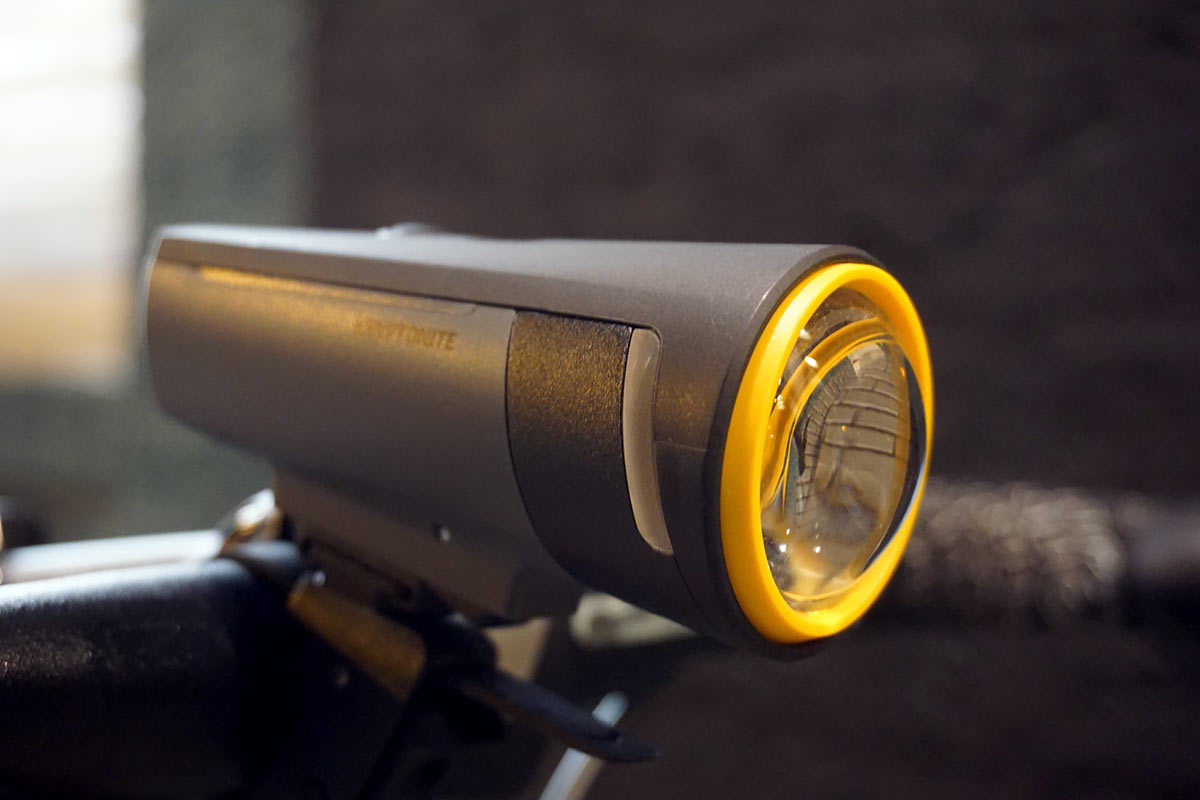 The X6 Headlight scales up with a similar look, but much brighter 60 Lux beam. It keeps the side markers, rounded lens, shape and colors, but that’s about it. 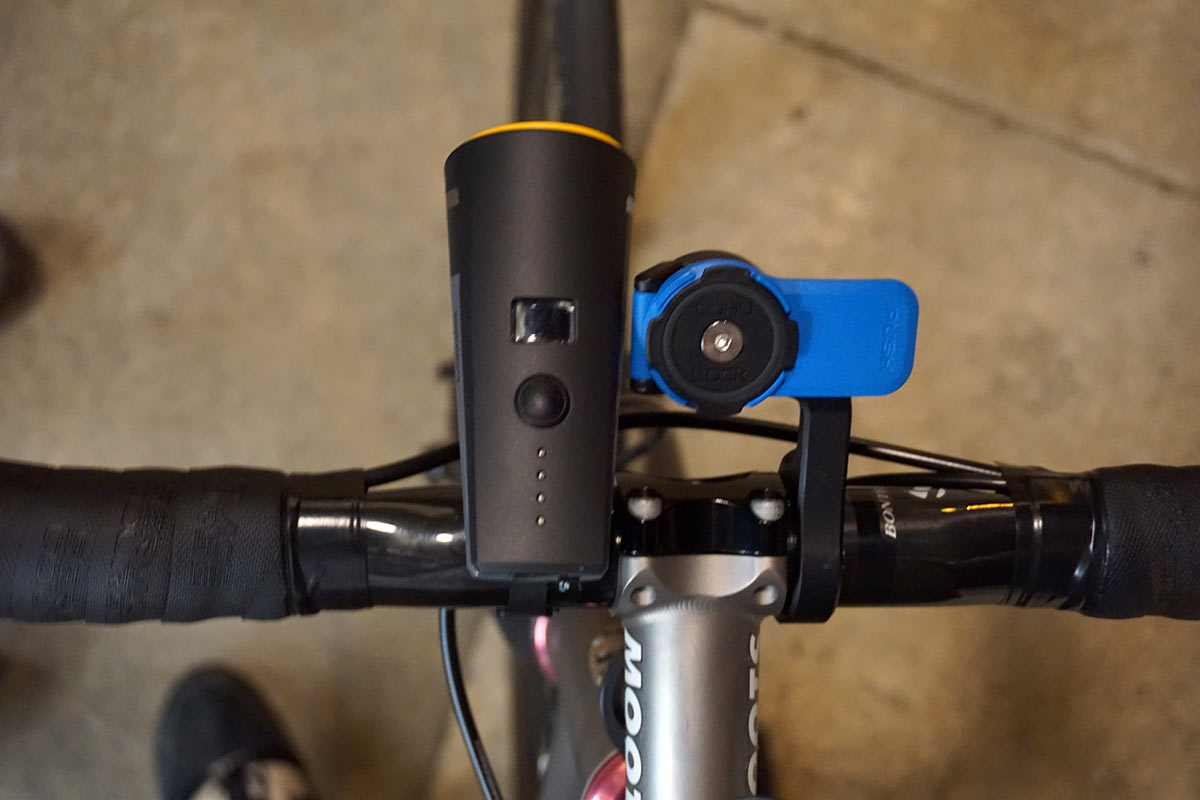 Up top are four red LEDs that are used to indicate mode, of which there are 7:

The last mode is a constant-on that automatically dims when you get into bright light, but I found that it takes full sunlight to make it dim. So, at night, basically always going to be on full brightness, even under street lights, which makes it more useful during the day.

Say you’re riding the Blue Ridge Parkway and come to a tunnel…it’ll automatically brighten (takes about 2-3 seconds) so you can safely navigate the tunnel. Angled properly, it should still get oncoming traffic’s attention, but personally, I prefer a flashing mode for safety. 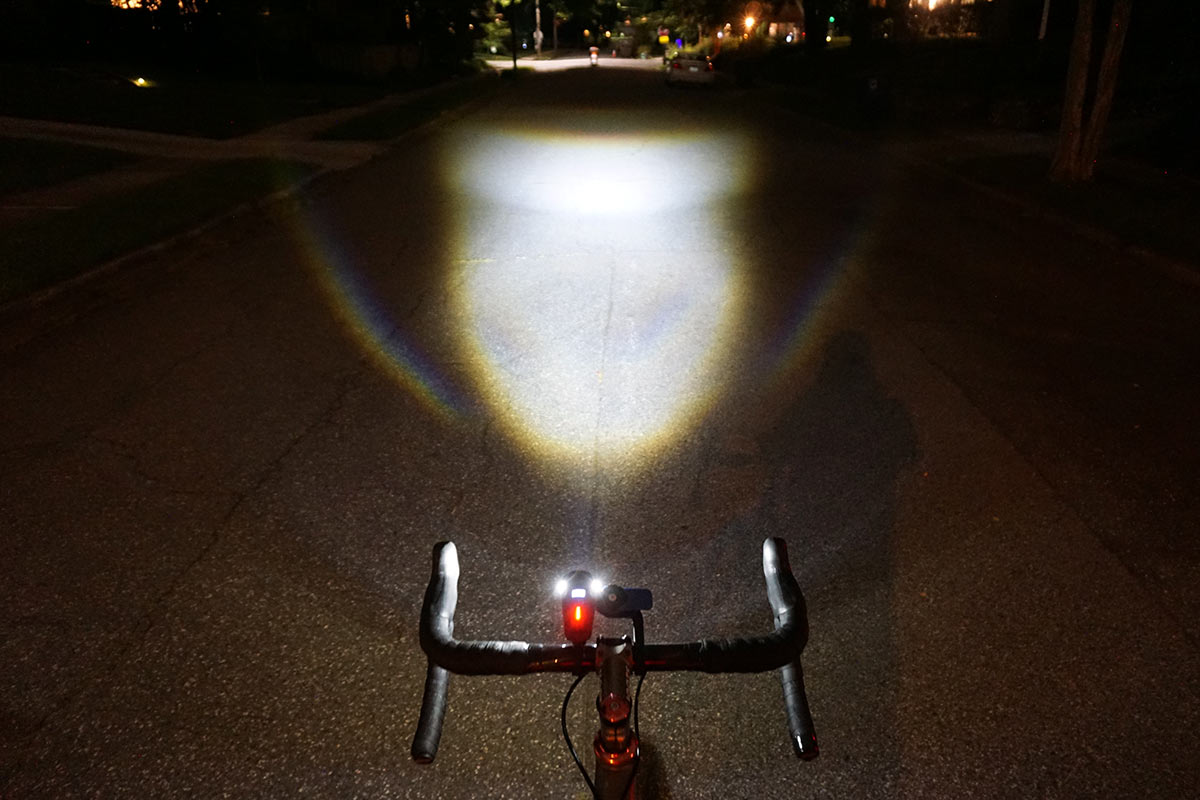 The X6 isn’t just brighter than the X3, it casts a longer beam with a wider bright spot at the front. Surprisingly, the LEDs and LCD screen on top aren’t as distracting as you’d think…they’re mostly outside of my peripheral vision while riding.

Which is good, because on flashing or pulsing modes, the LEDs change and blink along with the light’s pattern. 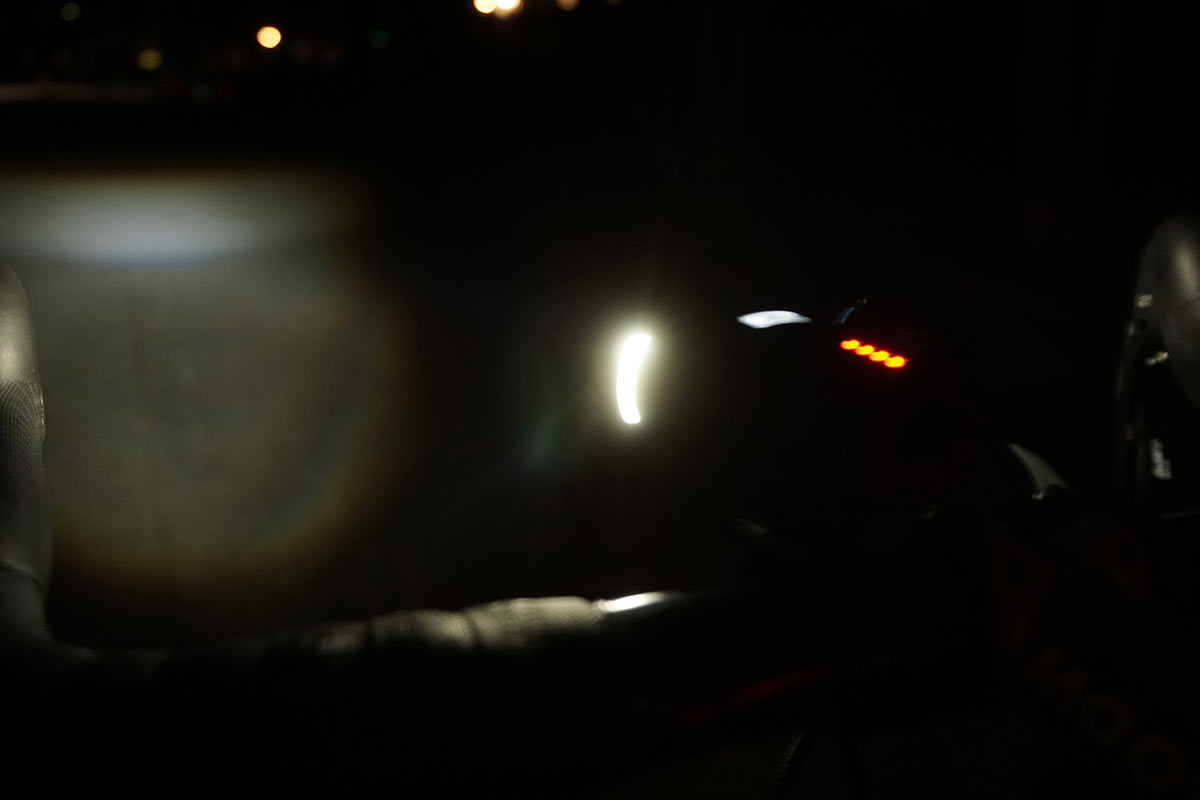 The backlit LCD screen shows remaining run time in each mode. There’s no actual battery icon, only hours and minutes. Expect to get 3 to 30 hours depending on mode. Retail is $75. This light well at night even on dark streets, particularly for the slower average speeds of a city commuter or casual cyclist.

All three lights have memory, so they’ll turn on in the same mode you finished with. And they all use a quick-release button that securely mounts the light to the strap’s bracket. This makes it easy to pop them off for recharging or to prevent theft, then snap them back on in the same position. The X3 and X6 share the same size mount, but the X8 goes bigger… 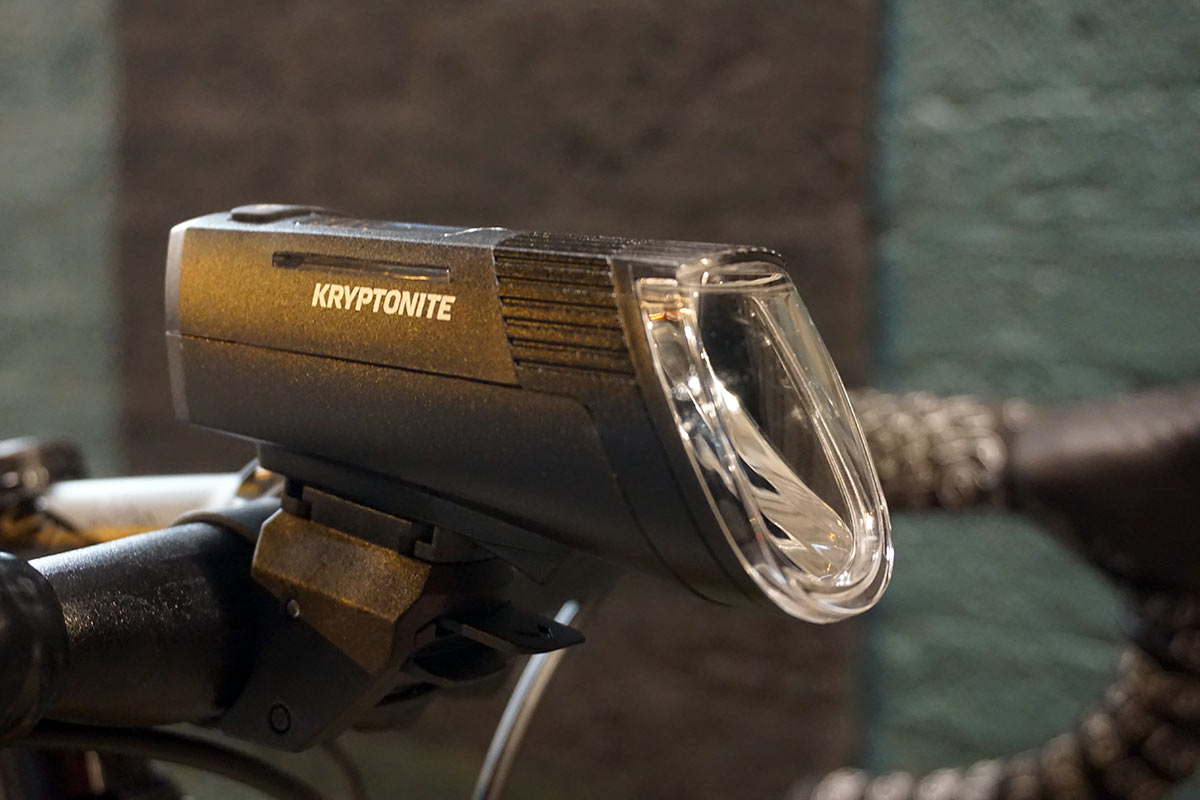 The Kryptonite X8 changes the form factor and controls. It uses an angular lens with separate side marker lights. It also has a larger mount that, while functionally the same as the others, is bigger, so it’s not cross compatible.

The X8 has two buttons, a plus and minus, that cycle through the modes. What’s weird is that there’s a hard stop at either end, so once you get to the Flash mode, you can’t hit + again and have it go to Low. You have to hit the – and cycle all the way back them. Holding the + turns it on, holding the – turns it off. 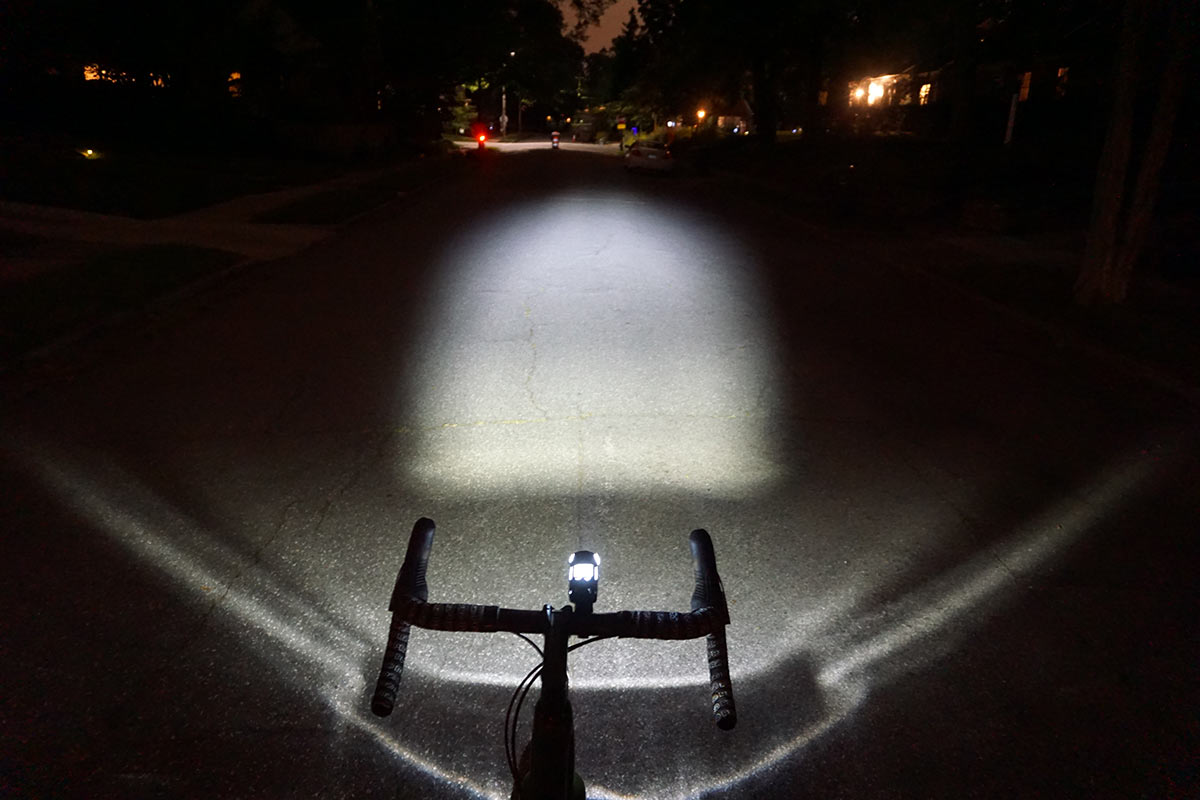 The X8 lays 80 Lumens on the ground in a long, dome-shaped pattern that’s whiter and brighter at the front. The photo above doesn’t quite do justice to the length of the light, it really does throw it far in front of the rider.

Visually, the dome seems just slightly narrower than a standard traffic lane, plus a dimmer, wider area directly in front of the tire. For riding dark roads, the X8 is head and shoulders better than the other two, especially for performance riding. 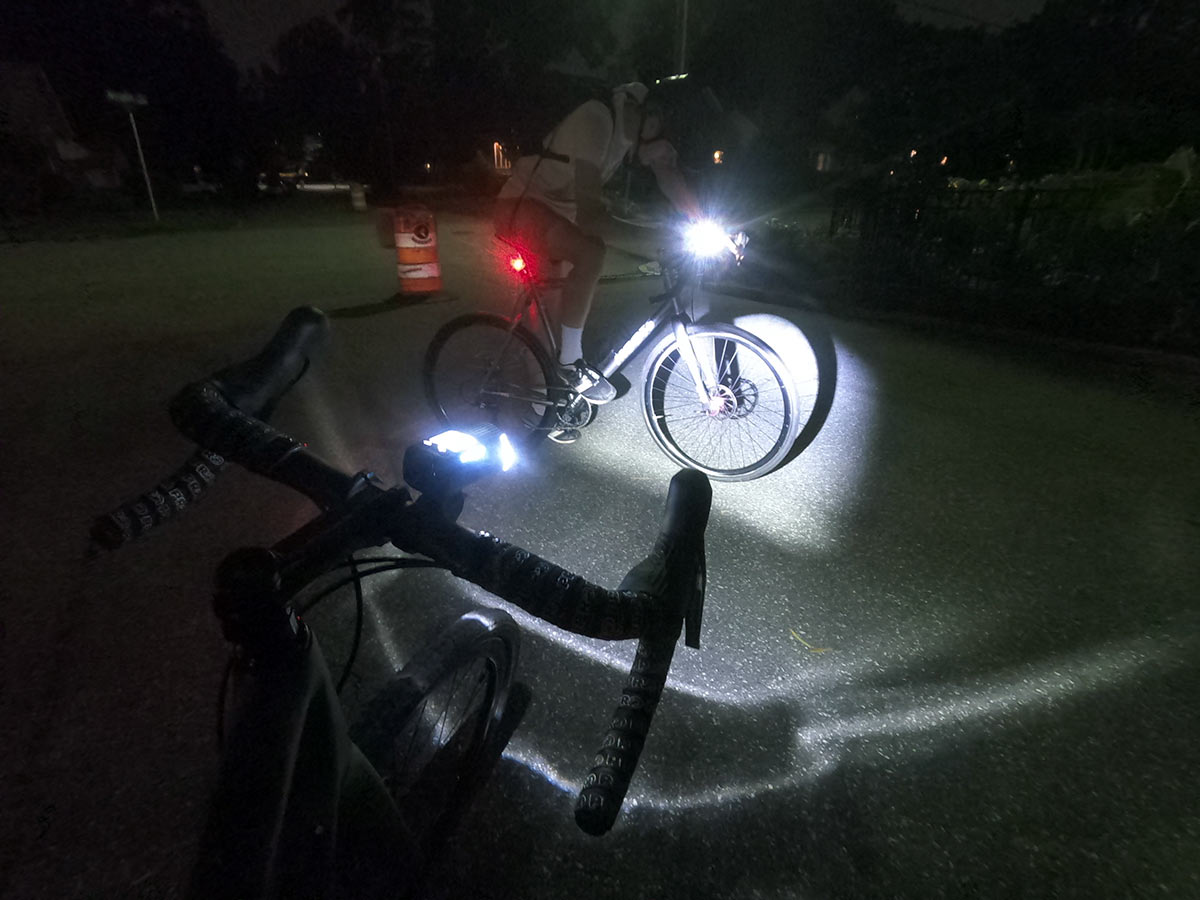 If you’re out training before the sun is up, or likely to get caught finishing a big ride after dark, this is the one I’d want to be able to see safely ahead of me when riding at 15mph or faster.

The screen shows a segmented beam pattern that changes based on the mode selected. It has both a battery indicator and a countdown clock, plus a time-of-day clock (hold both buttons down to set the time).

Retail is $145, and this one’s only available in the USA. 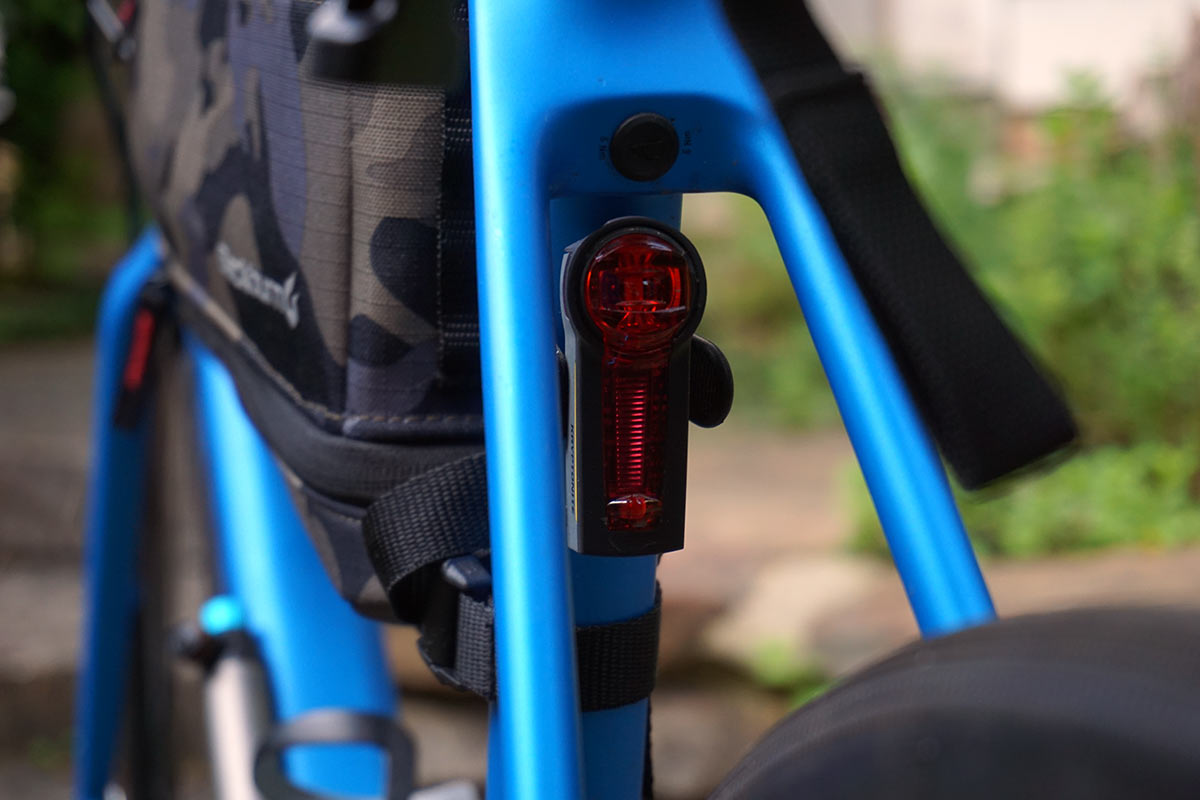 The Incite tail light comes in two models, the XR ($28) and XBR ($40). They’re both the same size, the only difference being the XBR adds an accelerometer-based brake light. We reviewed the XBR, and you can see it in action in the video at top.

The main LED that cycles through the modes sits up top and sends light throughout the vertical reflector guide below it to create a larger visual impression. Modes include:

The brake light is at the bottom and lights up when it senses an intentional slowing. Meaning, it won’t light up if you just start coasting or lightly feather the brakes. But start braking normally and it’ll illuminate. Technically, that’s a deceleration of more than 1.6m/s (5.76km/h or 3.58mph). It then remain on for about a second after it senses you’ve stopped or resumed riding. 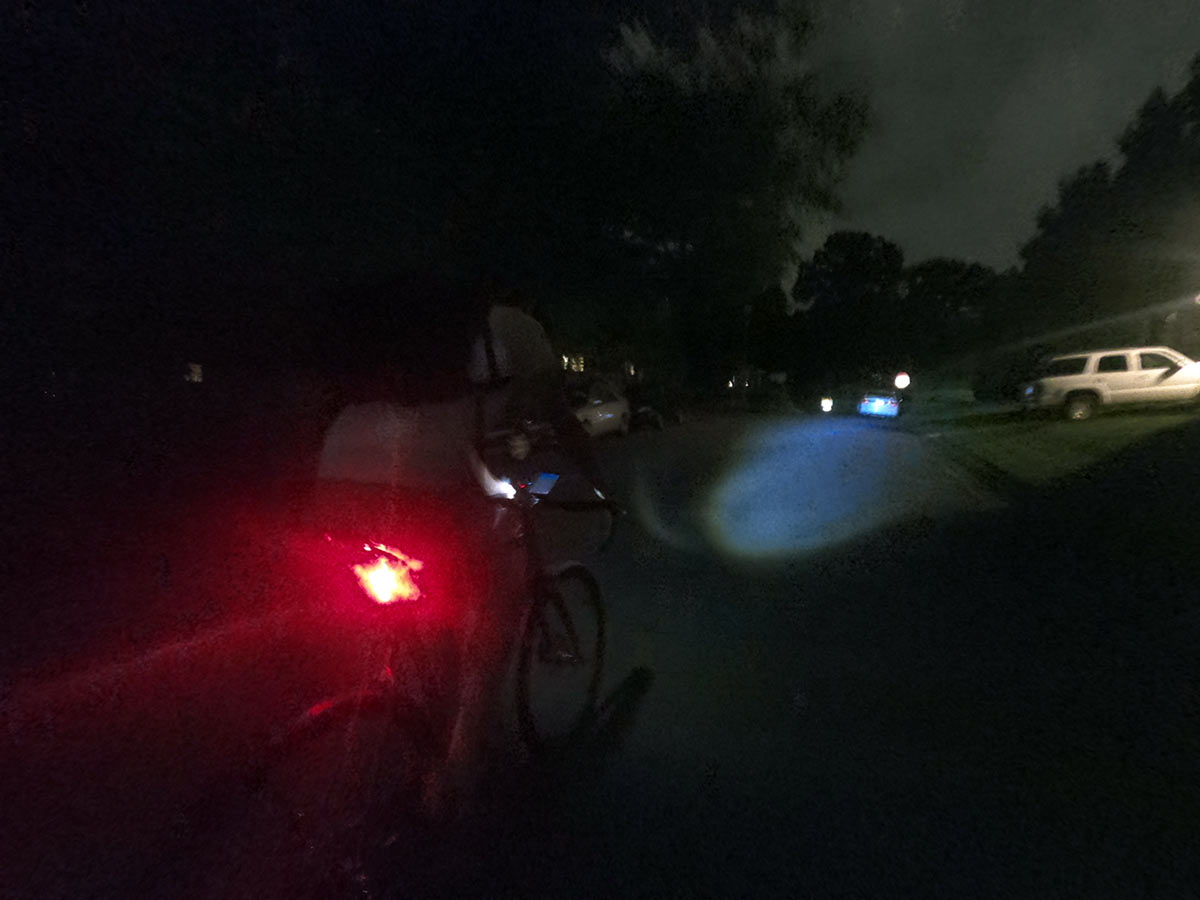 And yes, there appear to be two flash modes that are the same. And when cycling through, they sometimes take a half second to settle into their mode. Which made me want to cycle through them a few times in confusion.

Just know that the “Off + Brake” mode is probably going to be on when you cycle to it, but will go off after a couple seconds, at which point you’ll only see a very tiny indicator blink inside, just so you know it’s on and working, waiting for you to slow down. 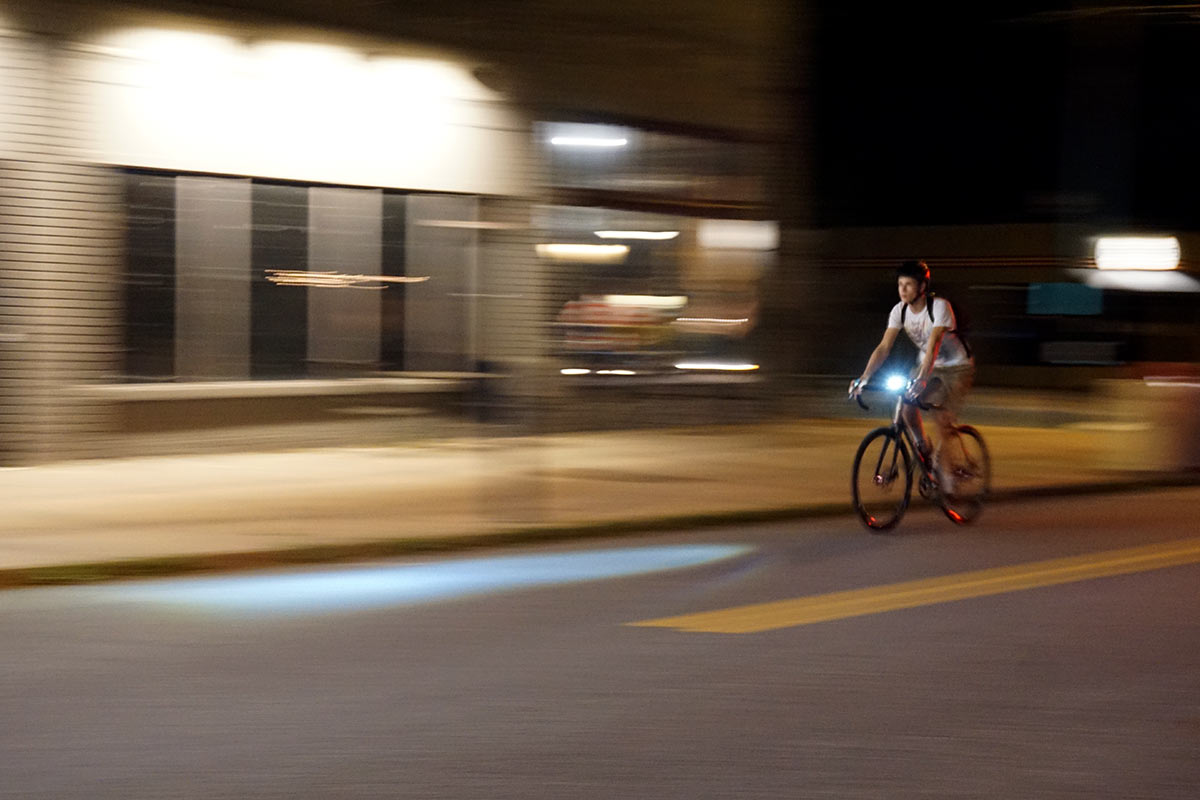 Kryptonite gets kudos for doing something different. The lights are good, but if you actually have all three in front of you, the differences in feature functions and beam patterns make them seem less like a family. Since you’re likely to only buy one, my impressions above should help steer you in the right direction.

Won’t work mounted upside down on bars? Won’t work for me.

Please turn your lights off in the daytime while riding on paved trails. I see you without the light. Ok.

You also need side blinkers, I use blinkers on my arms so cars coming at you from the side will see you!!!

What is the country of manufacture. I am interested, but i won’t buy anything from China.

Robin
Reply to  Peter B.

Did you check the country of origin for all the parts in your smart phone and computer? What about the country or origin for the rare earth metals in those devices? I’ll bet you own a number of things with parts or materials from China.

whatever
Reply to  Robin

Not to mention what they drive, ride, or wear.

@Peter B. – I’d be willing to bet my life savings that you own more items made or with parts sourced from China than we could count. How silly. In other news, some of these lights are cool but others look like CatEye lights from 1995. I’ll pass!

Because presumably the optic / lens is directional and upside would point the distribution of light into the sky (or at least off the ground).