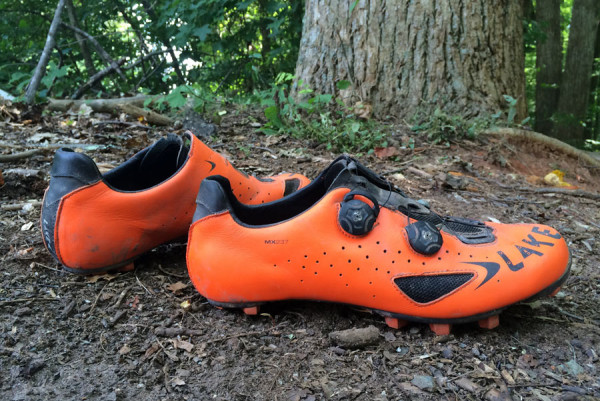 Last summer I reviewed Lake’s top of the line MX331 XC race shoes. Following that, they offered a pair of the mid/high end MX237 mountain bike shoes along with its road going twin, the CX237. We’ll start with the mountain bike model.

Compared to the 331’s slightly narrower CFC last, the 237 has their Competition last. It’s still plenty stiff, but adds a bit more toe box width to make it more comfortable for all day riding. In fact, that’s exactly what I had wanted from the 331, which felt just the slightest bit tight on long days. It also made the front of the shoe feel closer to my big toe, and the 237’s extra space eliminated any toe stubbing, too. There’s also the aesthetic differences and upper materials, but the weights and many of the functional features are virtually identical. That makes them a very performance oriented shoe that’s also really, really comfortable.

Step on in for the full review… 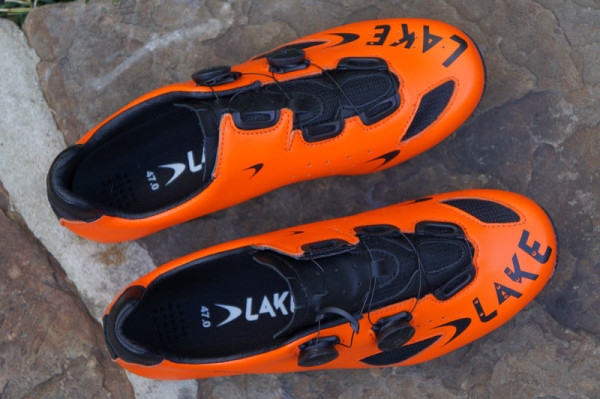 The basics: The MX237 comes in black or orange. The uppers are full grain leather with two mesh inserts, one on the outside, one near the toe on the inside, with a padded mesh tongue. The sole is full carbon fiber with real rubber tread. 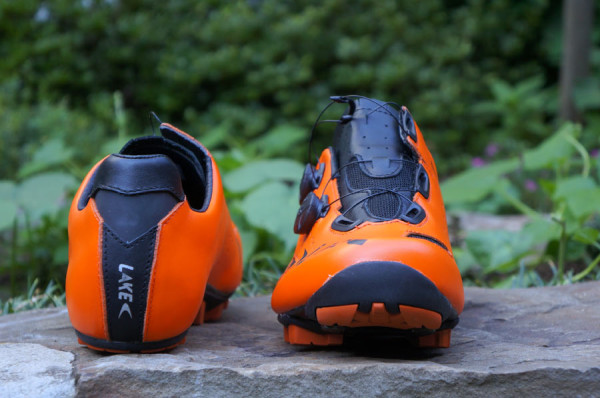 A tall heel section keeps the foot securely in place, but the sides are cut low enough to clear ankle bones with no chafing at all. The dual push/pull Boa closure runs its wires through plastic loops to spread the load across a wider section. The top closure pulls an offset partial strap, keeping it from forming a hot spot across the top of the foot. A rubber bumper covers just enough of the front of the toe box to dull a direct hit. 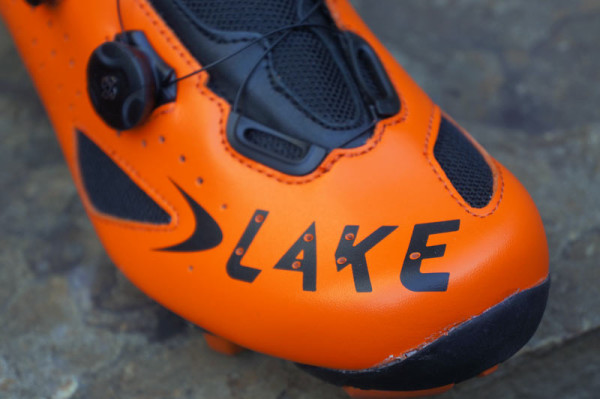 It’s still a race shoe, though, so additional protection is foregone for weight savings. 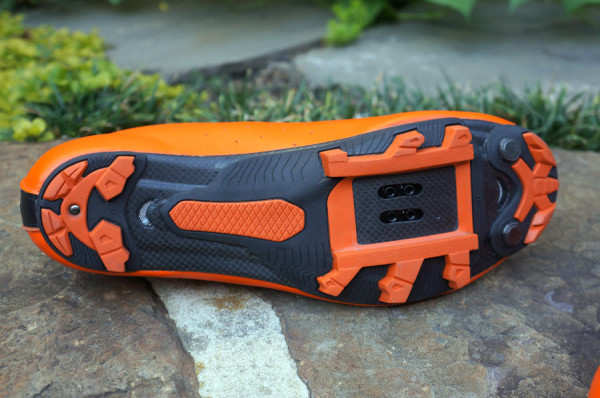 The carbon sole is visible, but only in a few spots. The tread blocks and rubber sections cover most of the bottom. The usual spots have the grippy blocks to grab into the ground, and a flatter section covers the midfoot. This feature helps prevent slipping off your pedals if you miss the cleat on the first try. It also protects the carbon if/when you’ve gotta hike anything rocky.

Small vents front and rear are covered by metal mesh. The shoes come with a warning for Crank Brothers pedals users, suggesting they use the metal cleat plates if they’d like to maintain their shoes’ warranty.

The heel sections are also full leather, with perforations to help vent. It’s used on the inside of the tongue also. 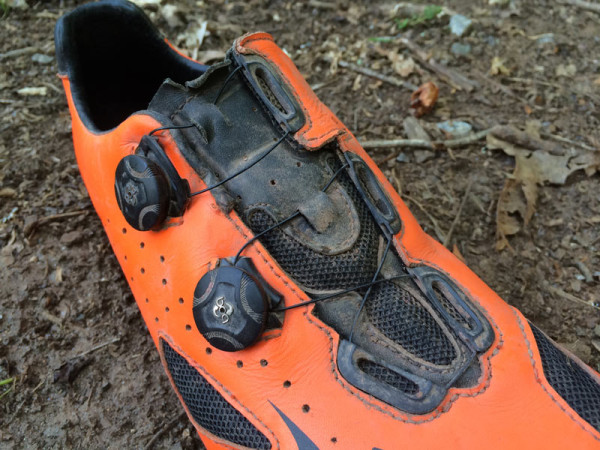 After a full spring and summer of riding, the shoes’ functional condition is as good as new, with only the expected scuffs and scratches marring their good looks. The shine of the orange has dulled a bit, but all of the stitching, tread and dials were perfectly intact. 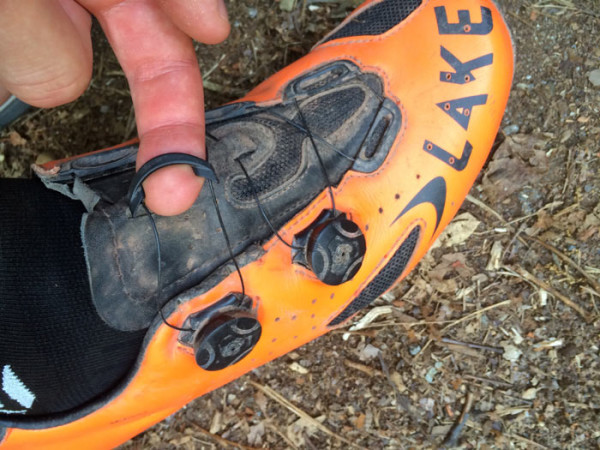 To release, simply pull up on the Boa dial and pull the lace guide to unspool the wire. The lower cable loosens with the same method but lacks the lace guide. 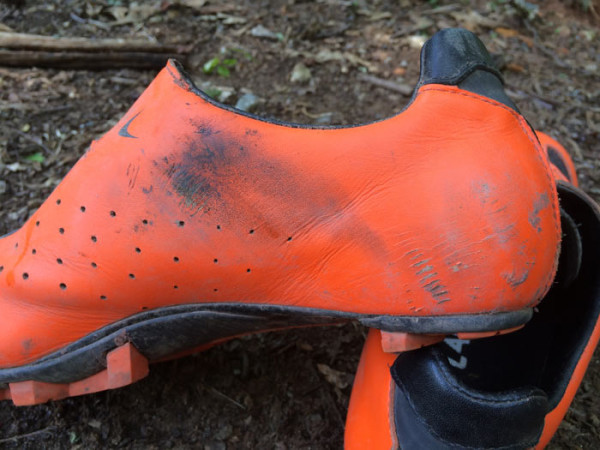 These scuffs and scrapes are the worst of the wear. 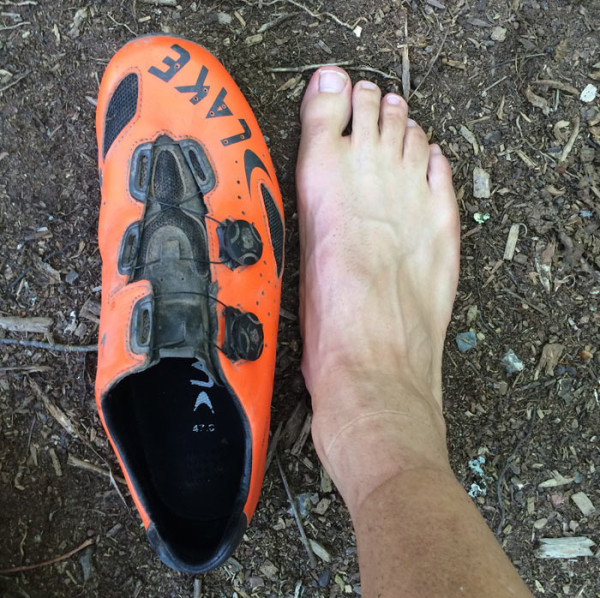 One of my favorite features about the shoes are the fit. Honestly, getting leather uppers and carbon soles on decent shoes is pretty standard. And Boa dials are equally common. What makes these shoes special is the well designed shape and the way they wrap the foot. Note how they mimic the normal shape of a foot. The toe isn’t too pointy, and they curve inward a bit on the inside. 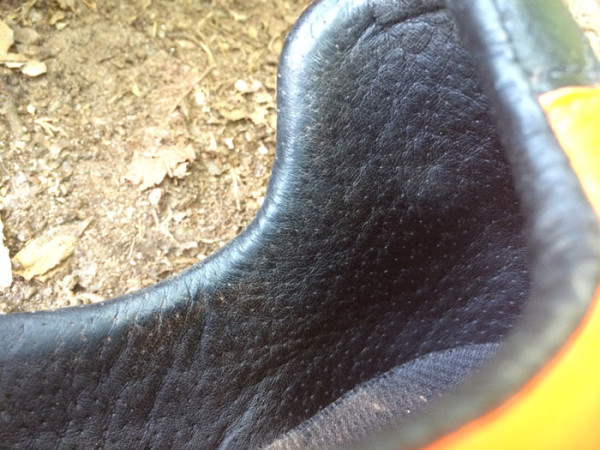 The perf’d leather may look like it’d be warm, but my feet never overheated, even in the humid heat of mid-summer. The padding around the heel and in the tongue were very comfortable. 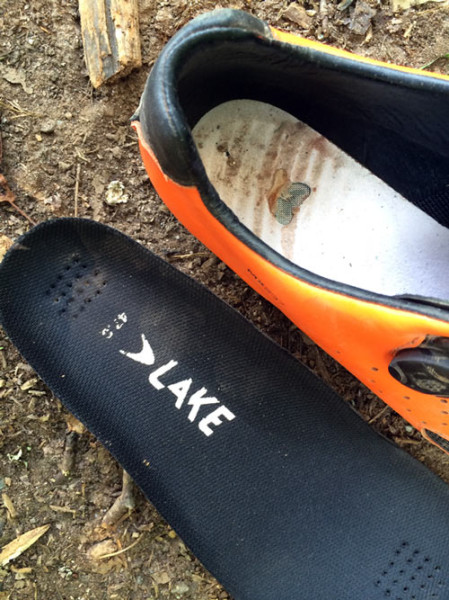 The insoles are vented to align with the mesh vents in the outsole. 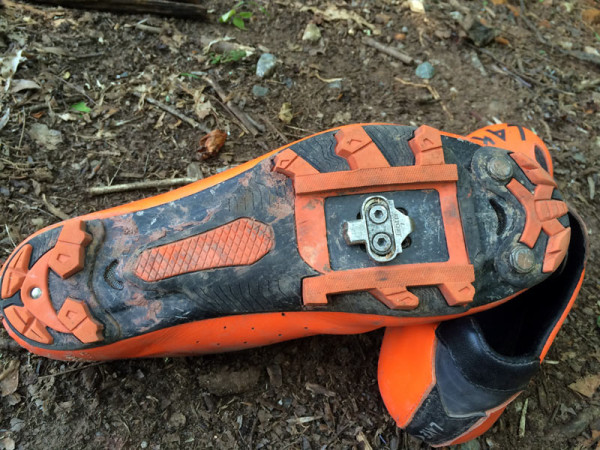 One other difference between the 331 and 237 is that the 237 has harder tread blocks fused with the softer black rubber. The 331 had a single durometer gray rubber that was soft and grippy but also got sliced hard by Pennsylvania’s rocks and started delaminating. I haven’t been back to PA with these, but they do seem to be a bit more durable.

These shoes have seen half a year of riding, mostly on the mountain bike but also some dry, summertime cyclocross action. For XC and general mountain biking, I have no complaints, only kudos. They’re stiff but walkable, light but durable, and very, very comfortable. I’d recommend them highly. 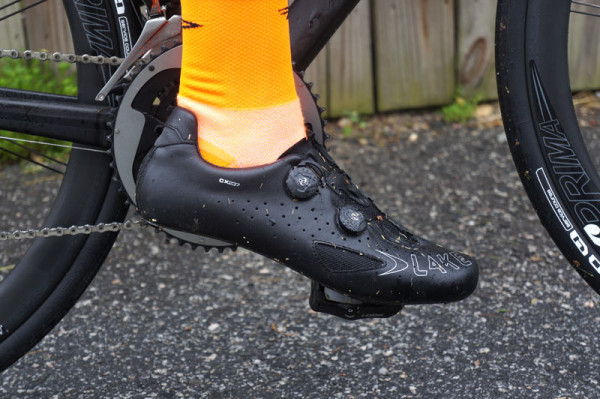 Take away the MX237’s rubber tread and toe cap and change the cleat mounts and you’ve got the CX237 road shoes. Everything about them is the same save for those two points. Given that, I found it odd that I could more easily get the Boa’s tension correct on the mountain bike shoes than on the road shoes. On the road, it seemed like they were either too tight or too loose – I had a hard time getting it just right. With thin summer socks, that is. Now that it’s cooled down, I’ve been wearing Defeet’s Thermeator socks and the shoes have been awesome. It’s a mystery to me why, but I like the road version better with a bit thicker socks. 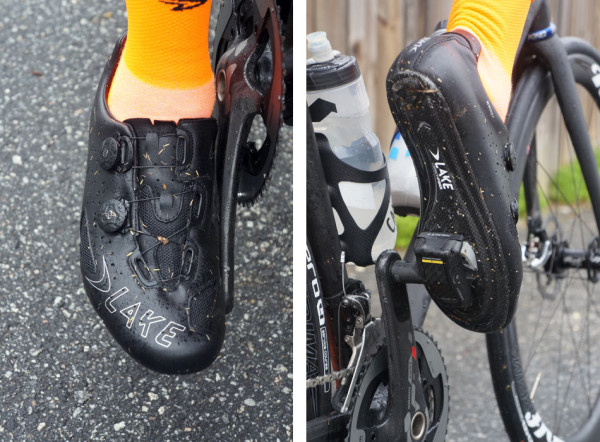 Like the MTB ones, the pull tabs to release the cable make exiting the shoes quick and simple. The Boa’s have spun freely from day one and held tight throughout the test. 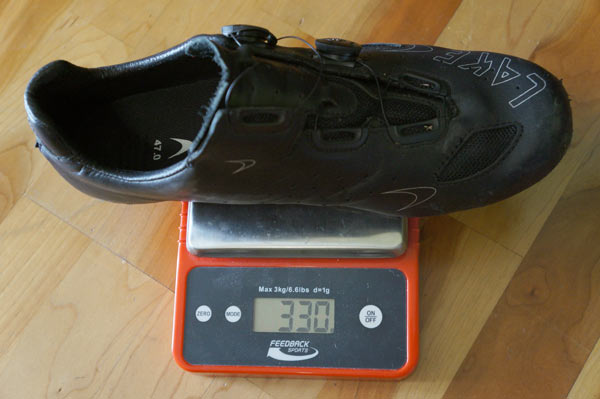 Take away the tread and lose 130g per shoe! 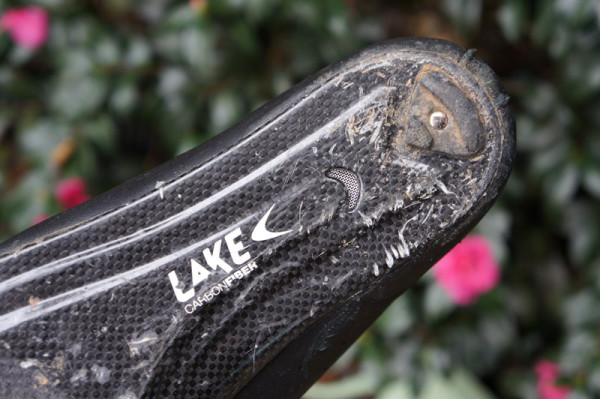 After a summer of riding that included a few gravel road adventures, the carbon sole looks worse than it is – all of the scratches are cosmetic only, none made it through to the woven carbon. One of the issues I had with the MX331 was cracking of the sole on the outer edges in a few spots, so I’m glad to see it didn’t happen on either of the 237 models.

The leather on the toe got a little beat up, too. But hey, character, right? Truthfully, I walked around on rough gravel sections far more frequently than made sense, so chances of them looking this rough after only being used for true road riding is slim.

Like the mountain bike version, venting is limited to two mesh sections up top and two small vents down below. While they weren’t the coolest shoes in the summer, they also weren’t overly hot. The nice thing is they make great fall and mild winter shoes. The Thermeator socks provided enough added insulation for a ride in the upper 40’s (ºF), and windproof socks or toe covers could probably handle another 10º cooler than that. That makes them a solid year ’round shoe in many areas. Good stuff.

Our thanks to Stage Race, which handles North American distribution and provided the shoes for review.

On the other hand, if Specialized sues Lake for copying their S-Works shoe designs, that would be one lawsuit I’d stand behind.

Canon dale
I can kind of see that, but your view is mainly a high level look at the similarities, likely looking at the dual boa dials. the differences are in the details.

These were almost my next shoes but I found a barely used set of Lake 330c shoes in my size for a song to replace mine current 330c’s whenever they give up.

@Canon Dale…or you could try a pair on, ride them, test them, compare them then make a judgement call. Yes, both use (different) boas, but other than that I fail to see where the design comparison comes in to play. Completely different materials, last, sole etc.

Mario- yes, I own them, greatest shoe ever. Completely different then Specialized boots, and I thank them for that.

I have the wide and they are a true wide….Had the latest S Works wide and it was NO different then the std shoe….not sure how they claim its wide. The Lake is far more comfprtable with the real leather upper, the S Works was a stiffer sole, otherwise the Lake blows them away.

I love my Lake cx237, I would like to know how to protect the bottom of the shoes. Any ideas?

I’m looking forward to getting my Lake’s …I’ve been using Specialized S Works 6 wides that were anything but wide, my toes were still cramped, and in the summer my feet swell making them unbearable. What is it about toe spread and a REAL toe box manufacturers don’t get?