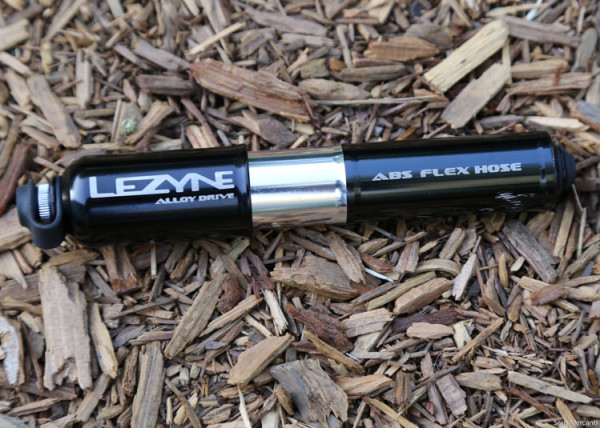 Due to the wide spread adoption of tubeless technology, the scourge of untimely flats has largely been eradicated from the trail scene. But no matter how smooth the rider, or fancy the setup, sometimes bad luck favors the bold, and then you need a mini pump.

Lezyne earned it’s reputation as an accessory manufacturer on the strength of it’s hand pumps, so we gladly accepted the opportunity to put their popular Alloy Drive Hand Pump to the test.

Stored inside the barrel of the pump is Lezyne’s ABS Flex Hose, which has a threaded Presta and Shrader valve on either side. In the past, the pumps were notorious for pulling out valve cores (on tubeless tires), but we did not experience any issues. 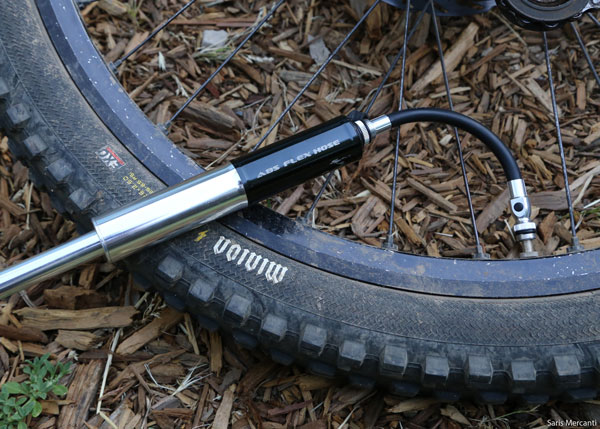 The flexible hose allows you better leverage while pumping, and reduces the risk of destroying a valve due to vigorous pumping. The Presta connection also has an air pressure release valve on the pump hose, to help dial tire pressure.

Both ports on the pump are protected by soft rubber caps, which have a tendency to fall off. While I’ve frequently fond them at the bottom of my Camelbak, the test pump is currently missing one.

The only other complaint we’ve heard about the pump is that it’s easy to get your fingers pinched between the body and handle if you’re not paying attention. 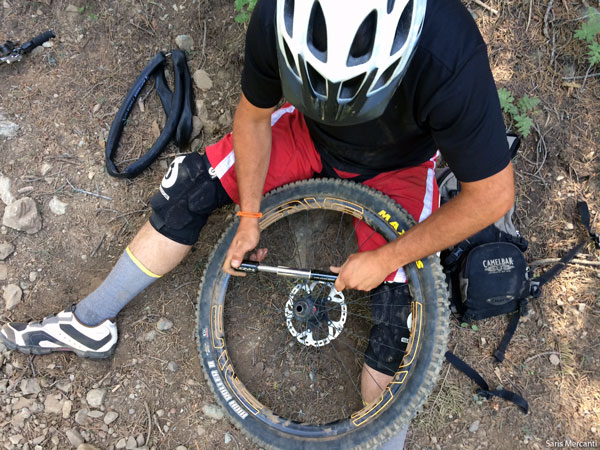 Aside from those minor quibbles, the Lezyne pump has been a rarely needed but trustworthy friend, whose light weight and performance have been appreciated on several epic adventures. Despite months of being jostled around in a tool pouch, there are only a few minor scuffs showing though, and the anodized finish appears to be holding up well.

In practice, I couldn’t tell you how many licks it takes to get to the center of a Tootsie pop, or how many pumps it takes to inflate a mountain bike tire, but during a recent trip to flat central  AKA Downieville, Ca, the small pump proved to be invaluable. On our first run, our group experienced a broken derailleur hanger, and four flats. Which turned a quick lap into a painfully slow adventure.

During each of those trail mandated breaks, the Lezyne Alloy Drive was called into active duty. While the high volume pump had a tendency to heat up, it did made impressively short work of inflating large volume tires. As an all rounder, it works well, but you’re always better off having the right tool for the job. Riders who spend most of their time on the road would find a high pressure pump like the Pressure Drive better suited to their needs, but the this little guy has more than earned it’s place in my mountain bike bag.

I’ve had this pump for two years. For the most part, pretty good. I especially like the flexible hose connection. The only negative with the screw on system is the tendency to back valve cores out of tubless tires. This can be very frustrating.

For the weenies amongst us:

I’ve had an alloy drive for 4 years. Rebuilt it 3 times and still going strong. The valve core pulling out is a non issue if you make sure they are tight just like any other bolt on your bike.

Just an FYI, the pressure release button is not to help regulate tire pressure, but instead is to release the pressure in the short hose so that the threaded connection is easier to remove, thereby reducing the chance to unthread your valve core. I bought one of these earlier this summer and love it!!

I’ve had this pump for a couple of years, and it works really well for fat bike tires as well. They are the best quality hand pumps by far.

Fatbike tyres with a hand pump must be a good few hours exercise?

@SamSkjord : you seem to own a Lezyne Pressure Drive (high pressure), I just want to know of it can inflate a MTB tire? It´s just for a very occasional use, but just wondering if it can handle this. Thanks!

@Julien, I have the Pressure drive pump and as far as being able to inflate a MTB tire, its very case dependent. If the tire is brand new, and all the stars align properly, yes it does, but I’ve also had several tires that would not (more that fail then those that exceed). You must take your valve core out, have a very slippery tire lube, and a rim and tire combo that works well together.

I also have the older style chuck (no pressure relief) and have accident spun off the valve core on both the floor pump and this one. I must say though, besides that, I really do like the pump. I am kind of thinking about finding a way to use some other head with at least the floor pump.

I’ve got one of their Pressure Drives, and I’m impressed with how smooth it pumps, and I really like the hose feature. I won mine with a variety of other Lezyne tools, and quality is high across the board. I emailed them asking for a bracket for my mini, and they shipped one right out – excellent customer service!
That the rubber caps come off is a bit disappointing, but it’s really not the worst, and the hose stays in place well.

Pro tip: If you have an old Alloy Drive without the pressure relief button unscrew the hose from the pump first (PRESTA ONLY 😉 , this releases the pressure in exactly the same way. I’ve also found that a thin layer of ceramic grease (safe on the o-ring seals) smeared on the pump’s seals drastically reduces the likelihood of unthreading the valve core and makes threading on and off much easier. All things considered I find the Pressure Drive to be a more useful all-round hand pump than the Alloy Drive, since the 120psi ability means it can be used on road and commuter bikes. But if you only ride mountain, the Alloy Drive is pretty much the messiah of hand pumps.

I have an Alloy C02 Drive for the mountain bike. Worth every penny.

My question about the ability to use a Pressure Drive CFH for a mountain bike tire was not about the issue with the valves.
I am searching for a small diameter pump to insert it into the seatpost of my DH bike (I do not wear any backpack when DownHill riding).
As I saw that Lezyne advice to not use High Pressure pumps for MTB, I was wondering if this kind of small pump could inflate a MTB tire.

Have had my trusty Alloy Drive for several years. Best mini pump I have ever had. If you want to keep the hose from rattling while stored in your Alloy Drive put a little section of shrink tube around the knurled section at the presta valve end.

Julien, if you are using a tube in a mountain bike tire, then any pump will work. The issue is that the road pumps don’t put out much air with each pump, so they may not seat a tubeless mountainbike tire well enough to re-inflate.

Basically, road pumps work with mountain bike tires, you just have to pump A LOT to add enough air volume.

I’ve an alloydrive medium from 2009, gold like a Marllboro 100!. It’s gotta big flat edge at the hose end. You can wedge this flatness anvil-style into any square-cornered hiway post/fence rail/just-about-anything-else and achieve rude leverage. I mean 80 strokes and the pump’s baking and still you can drive pressure lots. It’s a right proper pump. Used it today twice just how I described.

Aint ever read this anywhere, my experience with this pump. Took me a while to notice this leverage feature. Anyway, there’s why I likes it.

btw, I drip some silicone lube into the pump every few months too, along with a few strokes.

I have and use the pressure one, don’t leave home without it. I also carrie co2 cause one time i had three flats and two co2-and two tubes, it was a nice day for a walk that day i guess (Albuquerque NM- GOAT HEADS) . Some sealants,co2 is a no-no. I carry mine right next to my bottle cage, mine came with a neat little holder. Also its nice to be able to help a fellow biker who needs air, and for some reason they are not prepared. Did i mention what a looker they are. Good investment, you bet