While most of the US cycling industry was down at the Sea Otter Classic, Fixed Gear Crit season started with a bang with the Mission Crit in San Francisco. Making its fixie crit debut was Aventon’s new Mataro, the latest and greatest fixie in their line-up, which proved its worth right off the bat topping the podium under Aventon sponsored athlete, Esther Walker.

What makes the new Mataro so exciting for me isn’t that it’s already grabbing medals. Aventon invited us out to experience this sleeper hit for ourselves at the VELO Sports Center in Carson California – the new Mataro definitely did not disappoint. It’s loaded with features that make it a pleasure to assemble and ride. Plus, for the unbelievably low MSRP of $589.99, you can have a complete bike that’s actually race ready, with a completely reasonable entry-level build, minutes out of the box.

But first, a little background… Aventon was created in reaction to the mass-produced, consumer direct, low price and low quality steel and aluminum bike brands that erupted with the fixie boom of the mid-aughts. Aventon founder JW was in college in the U.S. bearing witness to this explosion in colorful, cheap fixies and, having a family background in manufacturing, saw an opportunity to create a higher quality product within the similar price-point space.

Whereas other brands playing on that field rely on a supply chain with built in layers of margin, Aventon, through setting up and running their own manufacturing facilities, owning their supply chain, and a blended dealer network/consumer direct model, is able to keep layers of margin out of their product. As you will see with the new Mataro particularly, this means a lot of bike for your buck. It feels and looks like a more expensive bike because it would be more expensive if it came through more traditional channels. From the first glance, it is clear that the new Mataro frameset is a cut above its predecessor. Rather than the straight steerer carbon fork and integrated headtube of the first generation model, the new model features a new, proprietary tapered steerer carbon fork, interfacing with a nicely tapered headtube. The whole front end of the bike looks very deliberate and pulled together – far more graceful and modern than the prior version.

And, generally, the level of finish in the frame itself was much higher than expected for a bike of this price point. The smooth welded joints go together beautifully. The stays are finished and tucked-in at the dropouts. The frame looks good. Similarly, Aventon developed a custom seat tube and aero seatpost system for new Mataro that doesn’t just work well and make the bike look fast, but it allowed Aventon to pull the rear-center in five millimeters to a tight 380mm with clearance for 28mm tires. The wheelbase is about 10mm shorter on the new 55cm size at 965mm, with shorter stack across the board for riders who want to get low and pro. 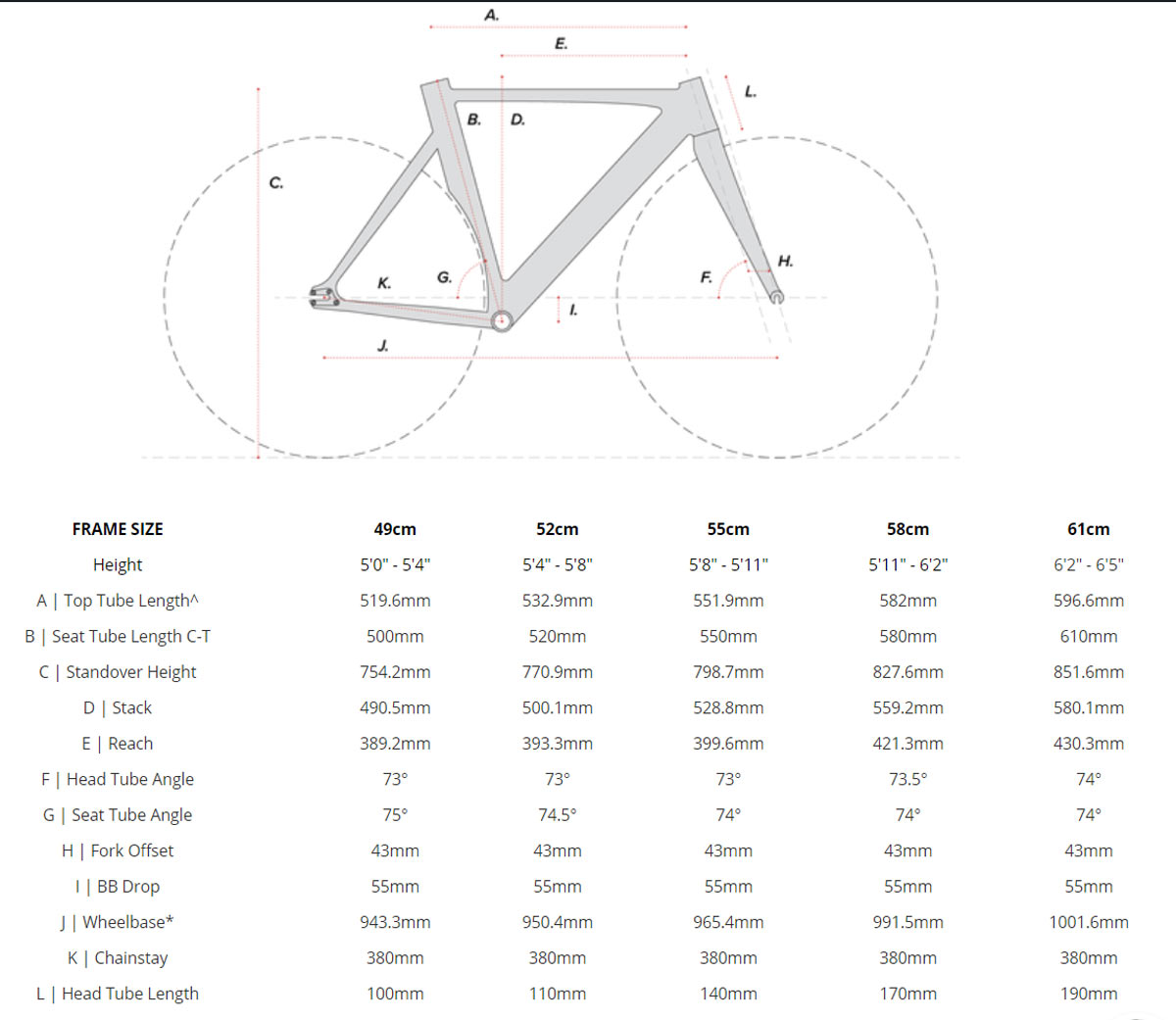 Aventon has also taken the new model opportunity to tweak their sizing. Tall riders can rejoice as a 61cm size frame has been introduced. Unfortunately for short-stature riders, the effective top tube and reach on the smallest size (49cm) frame have been extended, effectively cutting out smaller riders on the bell curve. With a proprietary seat post in the mix, there are fewer cockpit options to help mitigate fit issues. I was lulled into a false sense of security with the color scheme. When compared with the flashy and famous colorways popular at Red Hook Crit and other high level fixie crit races, matte navy blue (with what appears to be a light pearl) seems conservative. I’m not going to lie, though, the color, graphics, and bright accents grew on me.

At this time this Midnight Blue colorway is the only color offering available. However, if previous Aventon models are any indication, more colors are likely on the way.

I received the bike fully assembled for the test so, unfortunately, I missed the experience of pulling the bike out of the box and building it myself. Because Aventon works on a blended dealer and consumer direct selling model, they have invested in the consumer experience with this product starting with pulling it out of the box. Customers need only install the seatpost (saddle pre-installed), wheels, and pedals and the bike is good to go. (My track testing companion, Kym, claimed it took her a total of 20 minutes to put her bike together earlier that day.) The bike tested was a 55cm complete bike, stock with the exception of my personal pedals, the freewheel hadn’t been installed, and the front brake and lever had been removed to make it track legal. The bike comes stock with a 48-15 fixed drivetrain (rather than coming standard with a lower gearing of a street fixie) signalling that this bike is a fixed race machine first and foremost.

That all said, there are plenty of features in the spec that allow this bike to fare well on the street. A 16-tooth freewheel comes pre-installed on the flip-flop rear hub, front and rear hubs have sealed bearings and are laced to robust 30mm Deep V Push rims, and the bike comes with a front brake and lever installed, so it easily plugs and plays into street riding scenarios, fixed or free. The test was done at the VELO Sports Center, a 250m indoor velodrome (the first permanent indoor track in the US) with a maximum banking of 45 degrees and a surface of Siberian Pine. The surface has a reputation for being slippery, even for a wooden track. Because this is a race machine, Aventon supplied a sponsored sparring partner, the fabulous and very fast Kym “Nonstop” Perfetto (alley cat/fixie crit/velodrome track athlete, movie/reality tv star) along with the bike and venue. We did efforts, split kilos, and pacelines over the course of a few hours. The stock Aventon Push saddle was perfect. If the bike were mine, I probably wouldn’t trade it out. It was wide, flat, and featured the critical relief channel. The proprietary Aventon seatpost developed for the Mataro features an angularly indexing head to lock the saddle angle. The back of the post has reference lines to help quickly set saddle height when building the bike from a travel case. The Push branded short and shallow bars drop bars were comfortable and completely appropriate for racing.

How did the Mataro actually handle? Beautifully. Handled quickly but not unexpectedly – I could pick any line I wanted to on the banks. And once it was up to speed, it felt like a much more expensive bicycle.

There were two things that challenged me about the actual ride of the bike. One was the weight of the wheels. Coming from my carbon track wheels, the robust wheelset that would be fine getting around on the street feels sluggish in accelerating on the track (if my scales are to be believed, the wheelset with the freewheel installed are upwards of 3.4kg stock).

The other was the stock tires. Carson is a notoriously slippery track – and the Kenda Kriterium 25mm tires, brand new and fresh out of the box, felt a little cheesy on the wooden surface. It makes sense – the Kriteriums are a fine street tire, with built in puncture and wear resistance. Great for street racing. Not ideal for slick, steep, wooden tracks. At a time when track and fixie crits are experiencing a surge in popularity, the Mataro offers a high value, easy entry to both disciplines. For less than the price of most framesets, you can have a complete bike – one that you can race or ride on the street basically out of the box, but that has a nice enough frameset and cockpit platform that it can be piecemeal upgraded to grow with newer athletes as they gear up.

While it’s an easy investment for athletes looking to invest in a first race bike, it’s a respectable performance option for more established athletes as well. With a new crank and wheel/tire set, it’d be a top notch track or fixie crit machine, as it is already demonstrating on the course.

That all said, I wouldn’t change anything about it. I’ve already recommended it as my current favorite first new track bike to new riders coming through my velodrome.

Looks like a great bike; I would buy one! (I already have something similar, though this bike looks better). I had to do a double take with the manufacturer’s name as it is so close to the New Zealand brand Avanti.

So timely! I was just there with my roadie getting my fit fine tuned by Jim Manton at ERO Sports (highly recommended, incredible person). Will be taking the intro Velo course to get some track time as it looks amazingly fun.

Looks like a very strong value. Where are these made? Did JW’s family biz have to tool up for bike manufacturing from scratch or did they have prior experience in that? Lastly, do they just make the frame, or do they also make many of the components?

It’s pretty impressive as most new companies selling in this price range will just private label another frame, maybe with some small customization. Not a bad way to go if you pick a good vendor, and stay on top of QC, but to tool up for bikes from scratch and nail it so quickly like these guys seem to have done is seriously impressive.

“non stop” talking about nothing,”sup, whaaat….” and nothing to say and saying lots of it, Kim