Are you a thirsty rider who keeps your on-trail tool kit to a minimum? Osprey’s Katari 3 hydration pack might be just the thing for you, as it hauls 2.5L of water… and not much else. The Katari 3 is a simple pack with excellent construction, but it’s definitely not the most versatile option due to its limited storage.

I was curious to see if the Katari 3 would convince me there’s good reason to stick with a smaller capacity hydration pack vs. a hip pack/water bottle combo. Given that its cargo capacity is about equal to a hip pack, I’d say it all comes down to how much you drink while riding. The Katari 3 carries a 2.5L bladder, and offers a few small pockets for cargo. There’s one zippered pocket up top, and two mesh side pouches. The top pocket has enough space to carry a multi tool, a Co2 cartridge and inflator head, tire levers, a tubeless plug kit, a spare chain link, and maybe your house keys. The mesh pockets can carry gloves or a highly compactable shell, but any normal mid-layer would be a squeeze. A neatly bundled tube will fit in the mesh pocket but there’s a size limit- my spare 2.4-2.8” x 27.5” tube proved too bulky. The bladder is secured with three buckles- Two keep the top of the bag closed, and the third acts as a hanger to prevent the bladder from sagging inside the pack. I did find the bladder will sag enough to hang off the loop, so I would suggest clipping it to the bladder’s handle as intended. 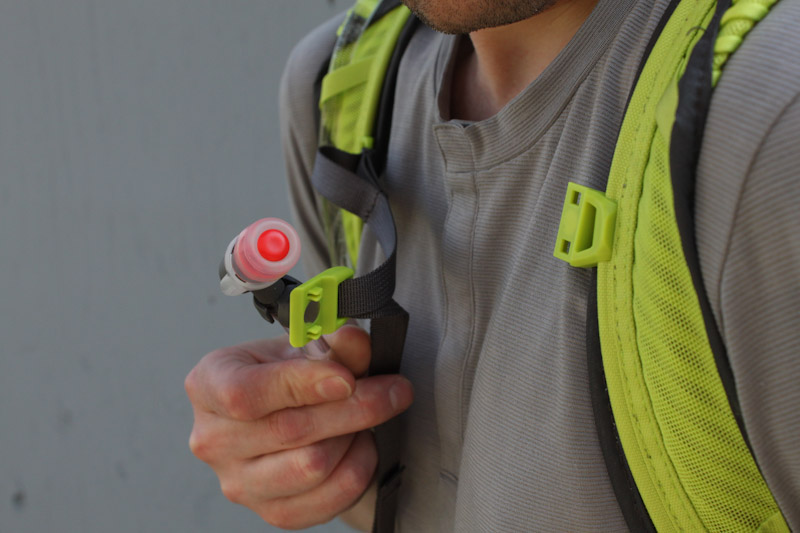 Osprey’s magnetic hose clip is great; after a drink, it’s very easy to re-attach the hose without looking away from the trail. The Katari 3 has a different type of buckle on the sternum strap, and it takes some getting used to…. more on that in my ride impressions below. The Katari’s hose and sternum strap can be switched to whatever side you prefer. Re-attaching the strap to the pack takes some finger-wrestling, but you’ll only have to do it once and I’ve never had one detach from any of my Osprey packs. The Katari 3’s shoulder straps are mostly made of mesh panels, with extra material only where necessary. The reinforced patch that sits over your shoulders features a rolled outer edge for added comfort, and the backsides of the straps are ribbed to provide some cushion and airflow. Osprey’s AirScape back panel is comfortable, but the only packs I’ve ever ridden that effectively let air flow are those with a fully suspended mesh back panel (which my Osprey Syncro 15 has, and I absolutely love it).

I now have three Osprey packs, two of which have seen plenty of use, and none of them are showing any kind of damage whatsoever. This brand has a well-deserved reputation for quality and stands by it with a lifetime repair or replacement warranty. 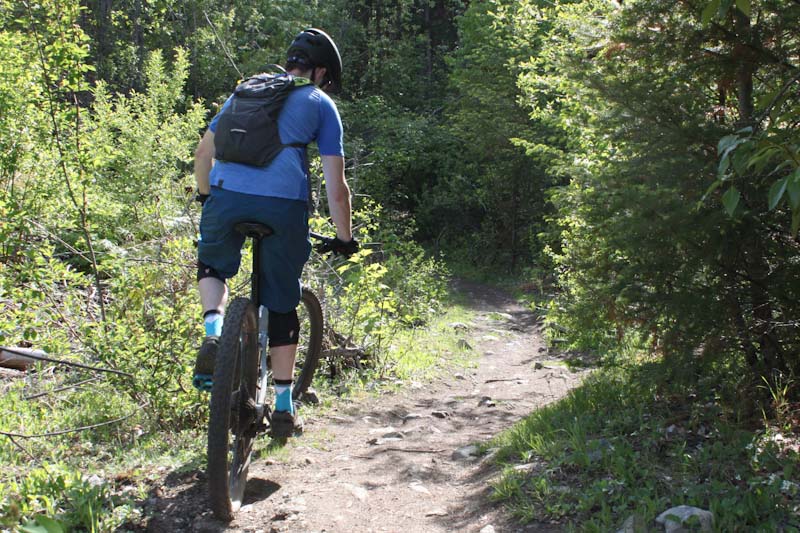 I’ve been riding with the Katari 3 since late March. My early rides were in temperatures around 60°, and I had a full sized sweat patch on my jersey after each ride. The pack’s footprint isn’t that small, it’s actually comparable to Osprey’s 9L Viper, so despite the limited storage it’s not any cooler on your back than some packs with more carrying capacity. 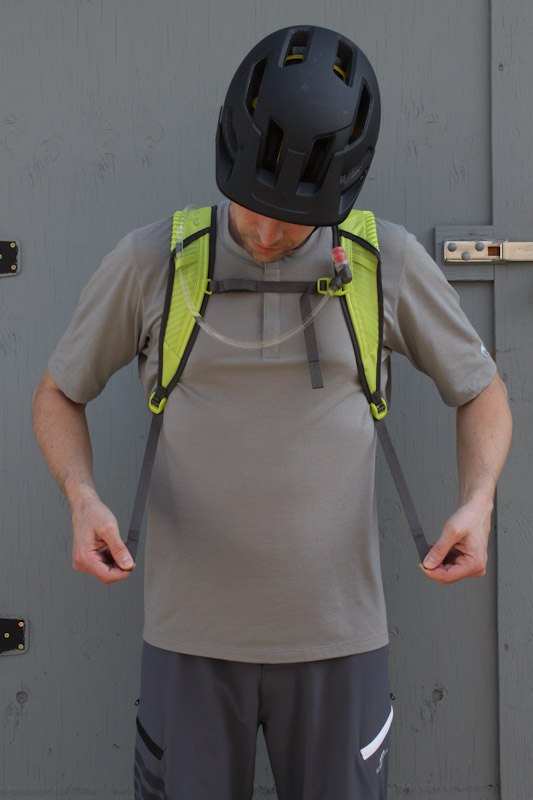 Osprey’s shoulder straps are well shaped and quite comfortable.  With their mostly mesh construction, they couldn’t get much cooler on the trail. One thing Osprey could have included is elastic loops on the adjustable parts of the shoulder and sternum straps.  I have about 10” of strap hanging at each of my sides, and about 6” on my chest. On this streamlined pack, it would be great to be able to neatly bundle up the extra strap.

I find the new sternum buckle a bit finicky, as I kept knocking the hose off its magnet while unclipping it. I inquired about this, and Osprey said they moved to this buckle because it’s slimmer than the traditional type. A down and outward twist is the best way to release it, and after trying that I found it opens up easily, but its best to grab the buckle above the hose. If you grab the top and bottom of the buckle, your hand tends to knock the hose off. 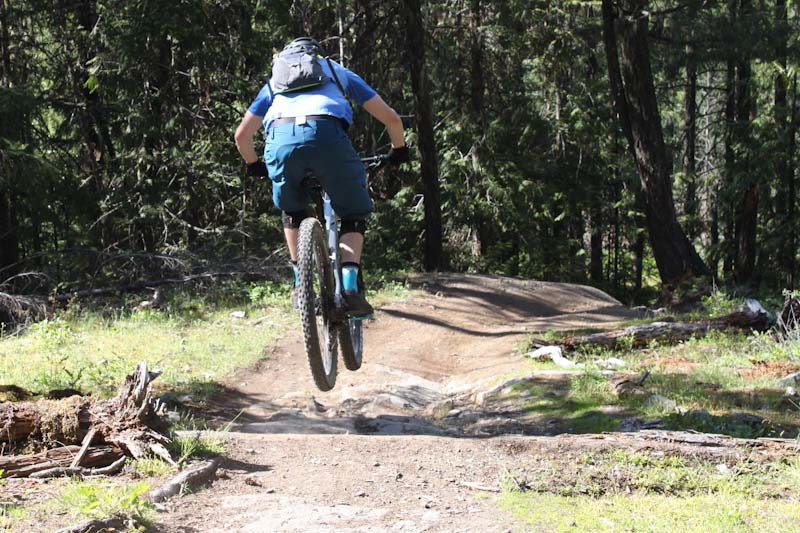 The Katari 3 does not have a waist belt. I found no matter how rough things got, the pack remained impressively stable… however when you jump, the pack jumps with you! A small, removable waist strap would solve this problem, but to be fair, when you’re making a minimalist pack you’ve gotta draw the line somewhere. My first question about storage was “Can this pack carry enough stuff to fix a flat tire?” as I prefer not to ride too far without that capability. I found you can carry the required tools to resolve a tubeless puncture, and unless you’re riding mid-fat tires or larger you can squeeze a tightly folded tube into the mesh side pockets. I was a bit reluctant to put anything that didn’t fit tightly in the Katari 3’s mesh side pockets (levers, Co2 canisters, etc.) for fear of them jumping out.

The other major limitation for storage is carrying extra layers. Unless you have something really thin and compactable (like my Dainese AWA wind jacket) extra layers will have to stay at home. This does limit the pack’s spring and fall use, as I almost always carry a jacket or midlayer on cooler rides.

So who is the Katari 3 ideal for? Perhaps you’re a rider who guzzles a lot of water, even on a short ride where you’ll only bring a basic tool kit. Maybe you’ve tried to haul everything on your bike, but found a bottle or two doesn’t hold enough water for you. There is definitely an argument here for switching to a hip pack, which is much cooler to wear and carries just as much cargo, but one thing is for sure- If you see the right kind of functionality in the Katari 3, Osprey’s quality construction will not let you down.  The Katari 3 retails for $65, and comes in Lime Stone (as tested), Cobalt Blue or Black.