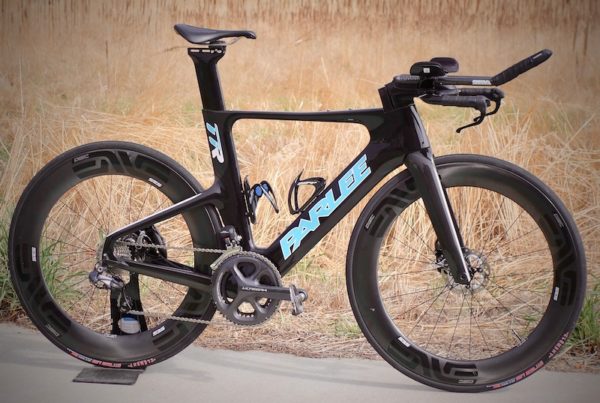 Founded in 2000 by Bob Parlee, his namesake company has produced some of the most coveted road bikes on the market. Continuing to push innovation, in 2016 Parlee looked at the TT/Tri bikes on the market and did something no one else was doing at the time – they opted for disc brakes. While a few others have followed since, no one has gone the extra step of adding carbon shields around the rotor to aid the aerodynamics and protect riders from the spinning rotor, making for a fast bike, that also stops fast… 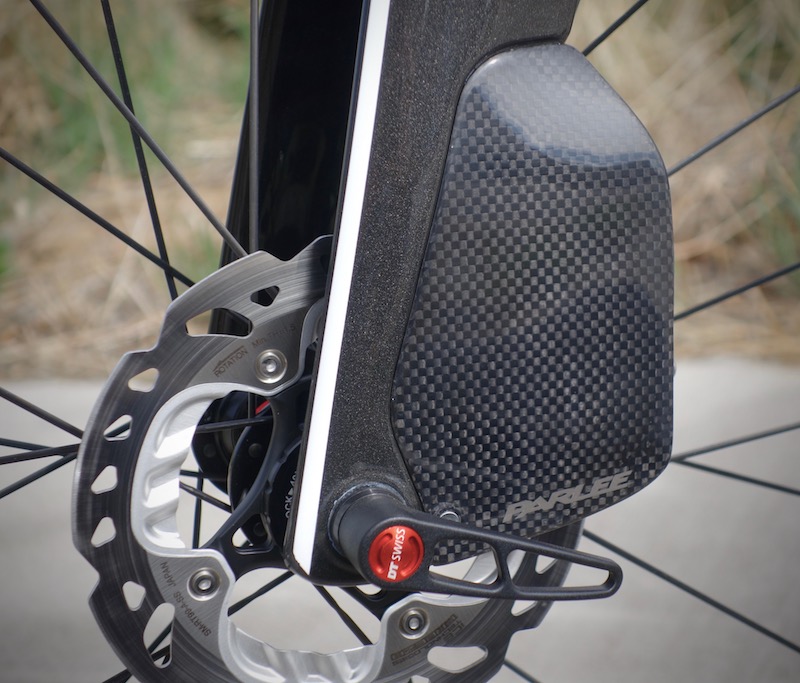 Currently, the TTiR runs TRP Spyre flat mount mechanical brakes with 140mm rotors since hydraulic brake levers were not available for base bars. Several companies are now working on those levers, and Parlee hopes to have hydraulic brakes available by late summer.

Base wheels for the TTiR are the HED Ardennes LT Disc, but upgrades are available in the form of ENVE 3.4, 5.6, or 7.8 disc wheels ($2300 extra – my test bike came with the ENVE 5.6 option). Parlee wraps the wheels with Clemente LGG Strada tires, 25mm in this case, and the TTiR will take up to 28mm for those extra bumpy TT’s.

The front end is a well thought out mix of adjustability and integration. Rather than use an OEM base bar, the TTiR uses a custom base bar with an integrated stem. The stem can be set in two positions with 15mm of fore/aft variation and custom spacers let you adjust height. A slick two piece cover hides all the wires and gives it an incredibly clean look.

Parlee tapped Profile Design for the extensions, choosing the simple T4 ski bend option. The extensions have ample fore/aft and vertical adjustment and the arm pads adjust laterally, to find the right fit. Continuing the theme of adjustment, the seat post has options to place the saddle from 75 to 81.5 degrees. 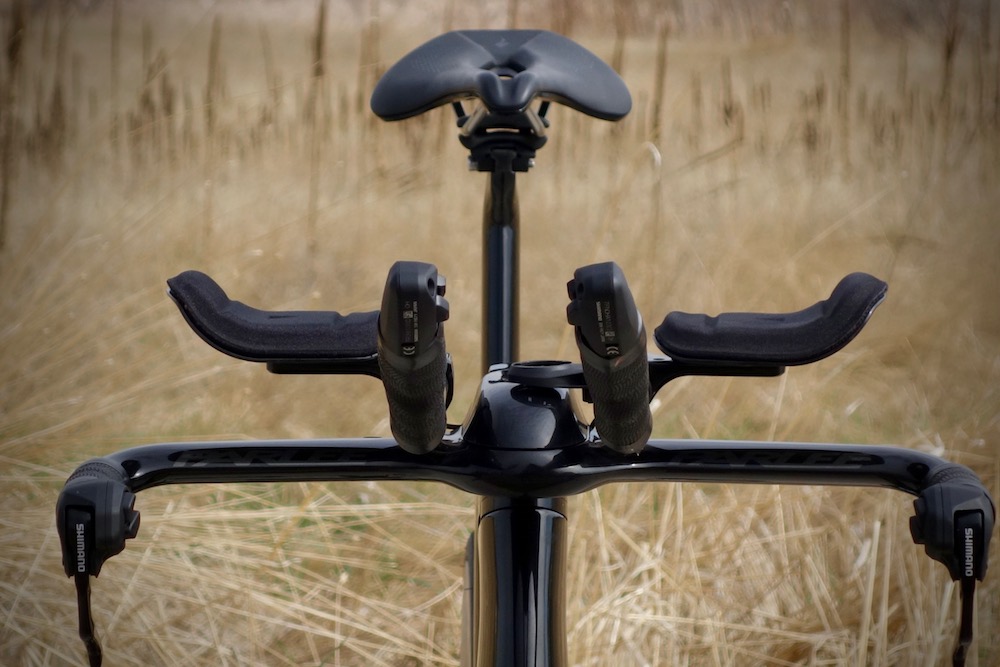 Another nice touch is the three bosses on the down tube. This allows you to place a bottle higher up, for an easy reach, or lower for better aerodynamics. There are also two bosses on the top tube if you want to add a storage box to carry your nutrition for longer rides.

Not surprisingly, the geometry is not overly aggressive. My medium/large had a stack of 530mm and reach of 429mm. That puts the stack in the middle ground and puts reach a little on the long end. This makes sense considering that the TTiR comes in only four sizes: S (49.5), M (52), M/L (54.5), and L (57) compared to the seven sizes for the Cervelo P5. With all of the adjustability up front and from the seat post, finding a good fit was not a struggle. 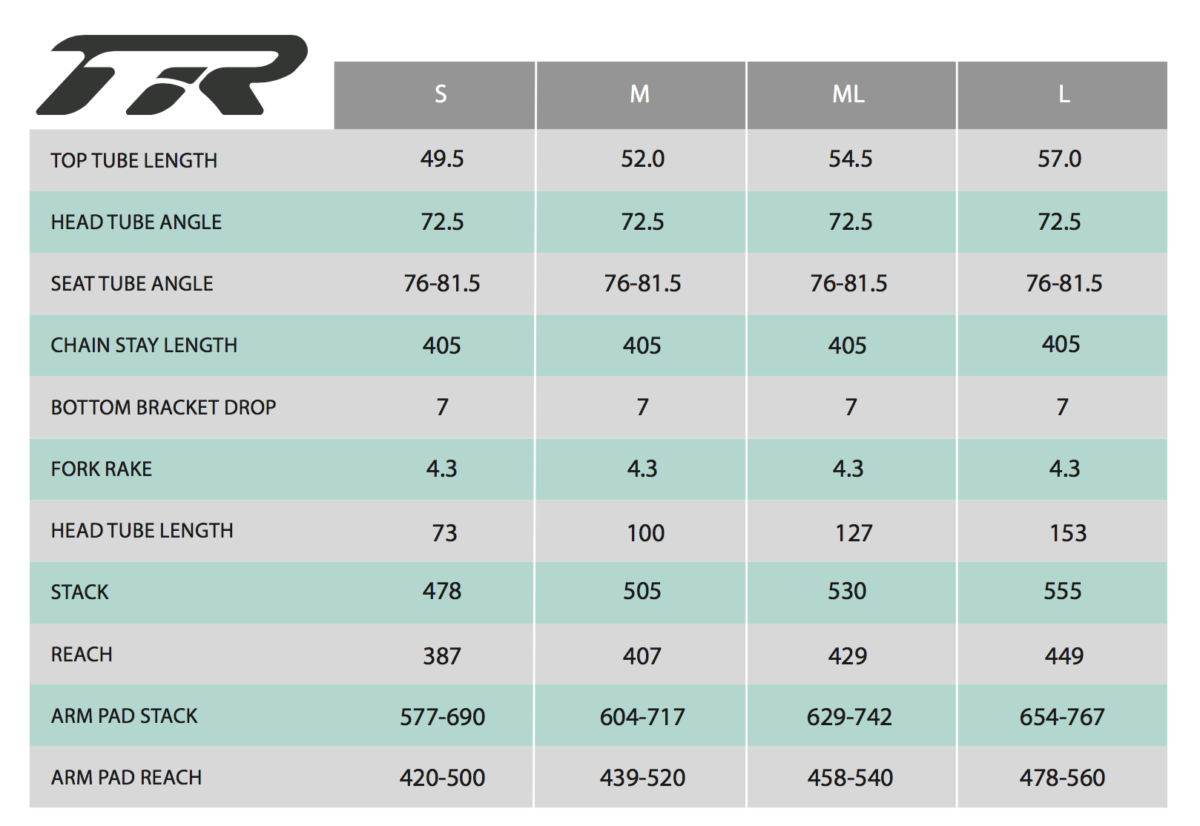 Interestingly, very little the information around the TTiR refers to aerodynamics. Parlee headed to the A2 wind tunnel to test the bike against rim brake TT bikes (no disc models were available at the time). They have one drag chart showing the TTiR against the Cervelo P5, but even in that chart there are points where the P5 tests faster. 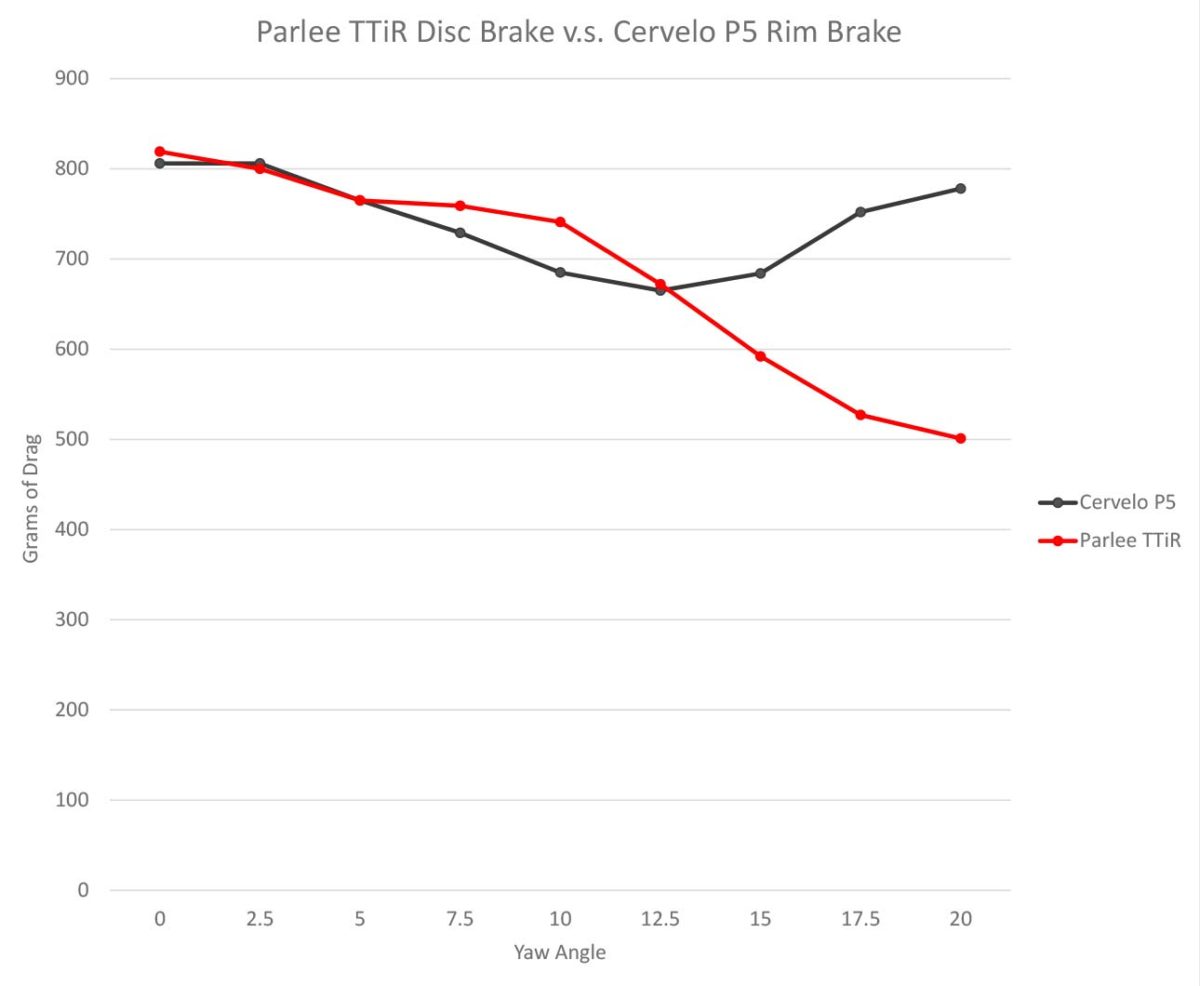 I appreciate that Parlee doesn’t scream about aerodynamics since the fact that the rider makes up almost 80% of the drag is something many manufacturers hide. Even when tested with a dummy rider, they are in an optimal position to get the best numbers. If you are not able to get into an “optimal” position (and most don’t have the flexibility to do so), then the drag numbers become less useful. Spending extra money on speed you won’t realize is not money well spent. So I applaud Parlee from staying away from the wind tunnel numbers game and instead focusing on aspects like braking and handling, while still providing what is a reasonably aerodynamic frame.

The paint quality on this bike is another high end touch that goes unnoticed at first. My test bike had a black pearl with a slight gray under the down tube that carries to the back of the fork and pictures don’t do it justice. All the lines are exact, and the pearl is just enough to set it off without being garish. Buyers will have several custom options starting at $500. 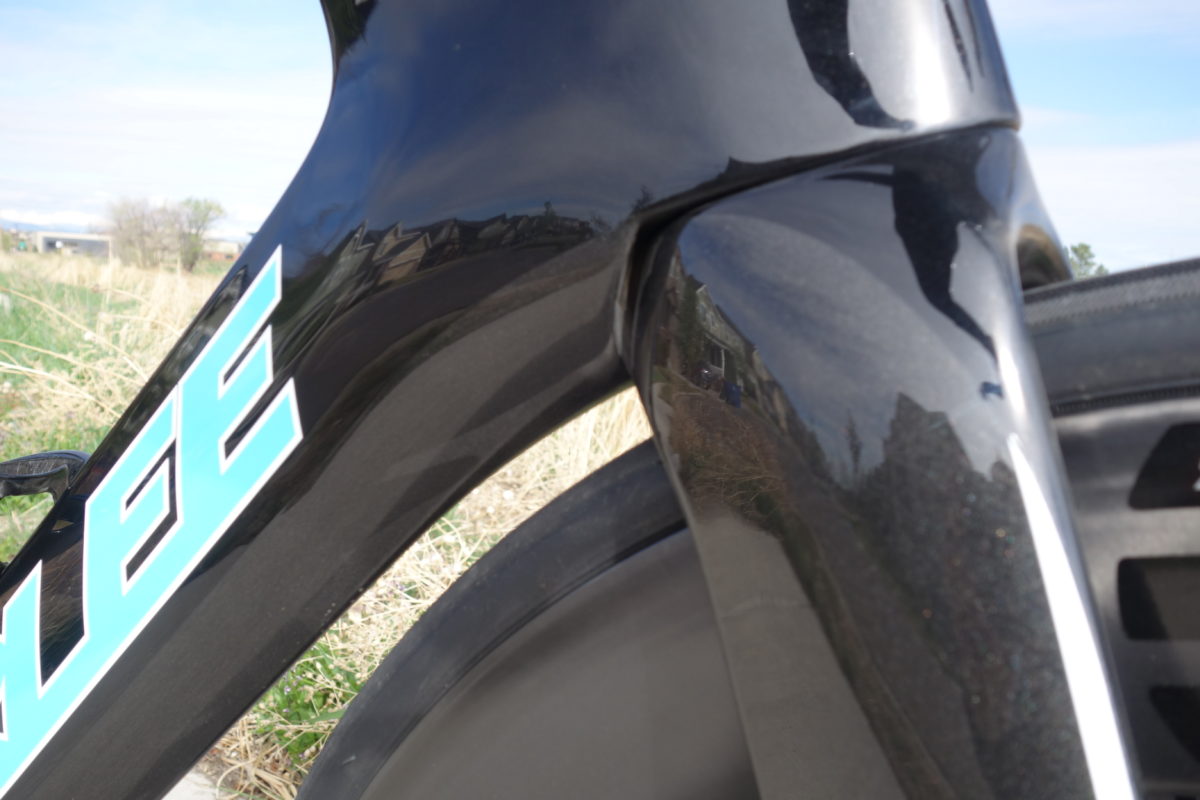 Of course, this is a TT bike, so it excels in head down, straight forward acceleration. As I mentioned above, wind tunnel data tells a narrow story of how a bike will perform on the road. Like most TT bikes, it doesn’t have incredible acceleration, but once up to speed the TTiR feels steady even in gusty conditions with deep rims. The chain stays are slightly longer than other bikes, aiding stability, but the 72.5 degree angle head tube keeps the handling quick without being twitchy.

It’s no surprise that the disc brakes are a marked improvement over standard TT brakes – even if they are mechanical for now. The increased power and modulation were particularly welcome during descents. Another advantage of disc brakes was the increased cornering precision due to the 12mm thru axles. While not a big issue for most TT courses, it’s still another added reason for more manufacturers to make the switch to disc brakes.

With the TTiR, Parlee brings innovation to a market that is finally catching on the benefits of disc brakes. And while it may not have the radical new look of some new designs, the TTiR excels where it counts- aerodynamics, comfort, usability, and safety. It has a nice mix of adjustability and integration while remaining user friendly, which is a key for athletes traveling to big races.

Several build options are available from Shimano, SRAM, and Campagnolo. Pricing starts $6,300 and reaches over $13,000.

Don’t forget that the rider is 90% of the mass.

Decent review until I got to the part about aero testing, 80% drag and most don’t have the flexibility to get in an optimal position. The inference is so far off, I don’t even no where to start. Drivel.

thank you! Talking about a TT/Tri bike, but we’re not going to talk about drag because the rider may not be optimally positioned? Sounds like they elected to dispense with serious tunnel time, and just market this thing to the age group athletes. But I’m guessing they don’t pass that savings onto the customer.

AJ, I couldn’t tell from reading your article whether you enjoyed riding the ttir or not and much of your article was a repeat of data from parlee’s website or very general without context. for example, you said it doesn’t have great acceleration, is that based on your riding or data? does it do better or worse than other triathlon bikes on acceleration?

you spent time lambasting the challenge riders have getting into an aero positon, but did not talk about the relativee ease or difficulty of getting aero on the ttir. you said it was long which to me is i heave to read into what you said because it is not explicit can help someone with a good aero tuck get lower rather than having a short reach that puts one more upright but i am inferring rather than reading something clear.

most of us who are considering the ttir can’t ride one before buying because parlee is a small company and we look to articles on it to give us a personal review instead of mocking the average rider’s ability to get aero and reciting stuff from their website. to me it seems parlee wasted a demo bike being sent to you because this article has very little clear insight for us readers.

What advantages do discs truly provide for time trialing? I’m not a luddite I wouldn’t ride a MTB without hydraulic discs, and whilst I don’t own a disc brake road bike for a few logical reasons (live in a flat area, no neutral support at races) I don’t bash them. I have never really looked at my TT bike and screamed “this needs or would be improved by disc brakes”. Of course the braking on my tt bike isn’t world class but that has far more to do with the positioning I’m in and the geometry of the frameset than the Ultegra 6800 stoppers. No doubt that discs would offer superior modulation (not buying that thru axles vastly improve handling) and stopping power but the fact remains when I’m flowing through a switchback descent on my TT bike (we do have a few TT’s in my state that have these with max speeds hovering~88KMPH) the fact that my elbows are ahead of my top tube is more a limiting factor than my bike having rim brakes. I have a lot of respect for Bob Parlee so I’m legitimately asking why this is necessary? I’m having a hard time reconciling that someone with his expertise is going for a cash grab from some age groupers who are unable to descend without cooking their enves.

crash, i can help you with your question. in a flat straight race it makes little difference. if all yoy do is ride in flat and dry conditions, it won’t matter.

however, that is far from the norm. in my fittest triathlon in 2017, i was winning my age group by a 1/2 hour or so but stopped because of the wet hilly conditions as it was getting dangerous and i realized my family is more important than that race. i have rim brakes and disc brakes would have changed that.

also, i train in a vey hilly area and we have a four or five month rainy season. there are many times in these conditions that disc brakes would give you more stopping power.