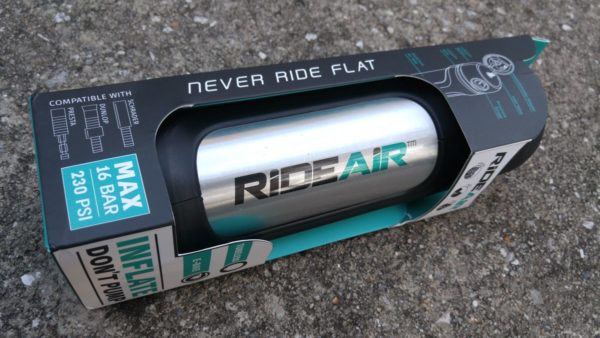 The idea behind RideAir was dreamt up in March of 2015, with a rough prototype built for feasibility testing just one month later. Since then, the RideAir product has gone from strength to strength, from successful funding of its Kickstarter campaign in June of 2015, to the first production run just two years later in March of 2017.

Simply put, the RideAir system is a rechargeable, portable inflation device that can be filled with air from a bicycle floor pump or compressor, then taken with you as a backup quick fill or tubeless tire re-seater. That’s the theory, here’s how it performed… 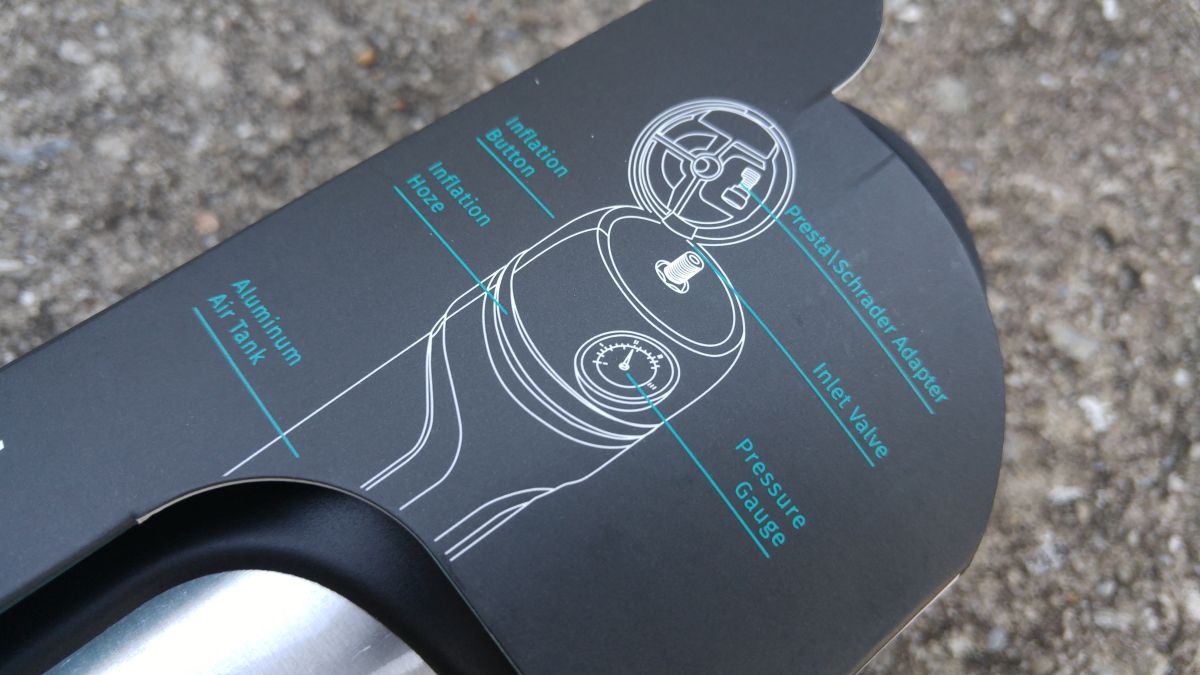 The designers of RideAir claim it can be used to seat tubeless tyres, and can do away with wasteful CO2 cartridges in the instance of a puncture. 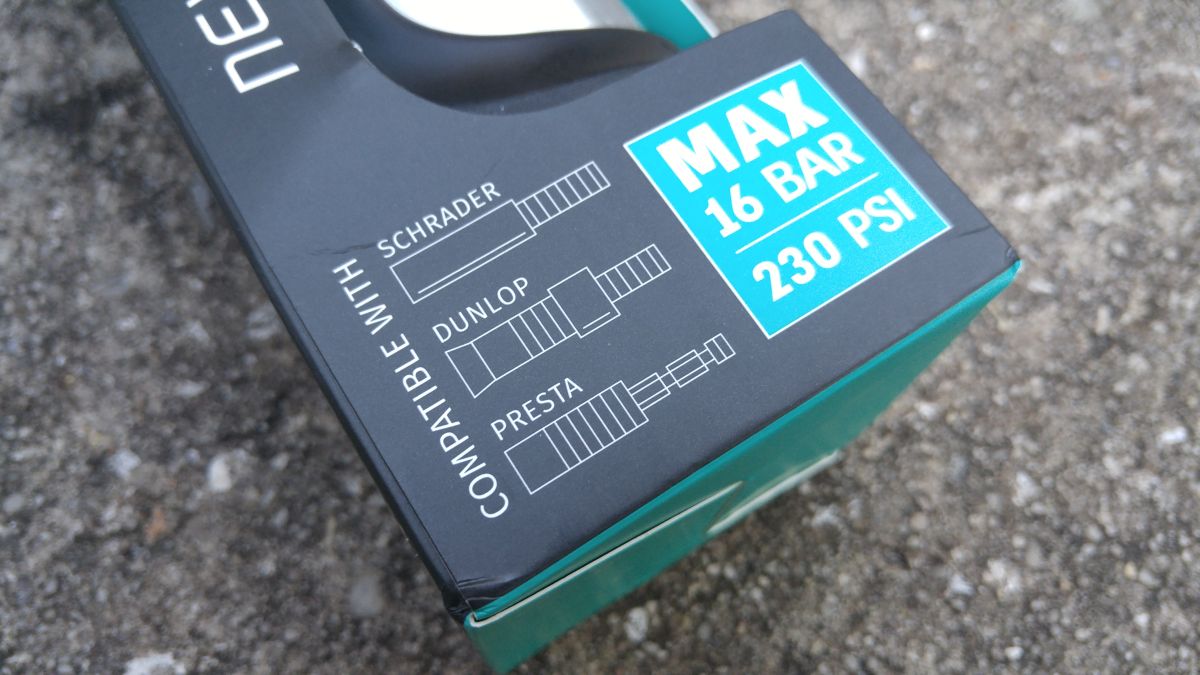 RideAir supports Schrader, Dunlop and Presta valves. Its air tank can be filled to 230psi. 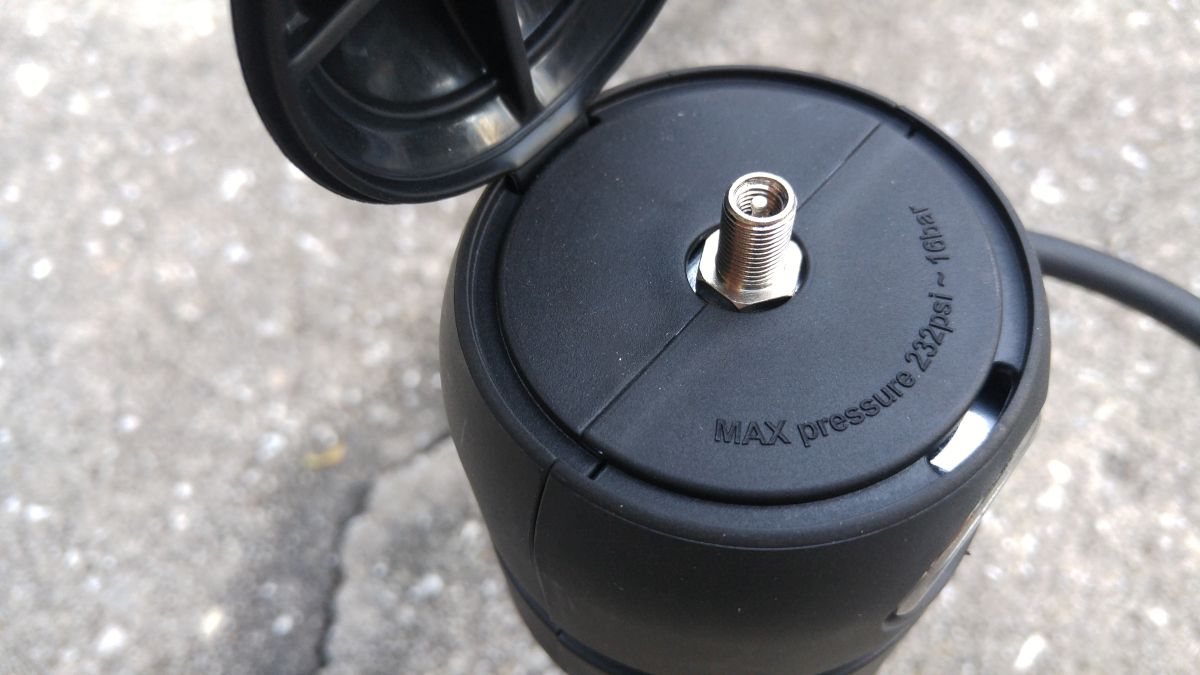 The RideAir system, or air tank if you prefer, is simple to operate. Pop open the lid, attach your floor pump or compressor chuck to the valve and inflate to the desired pressure. 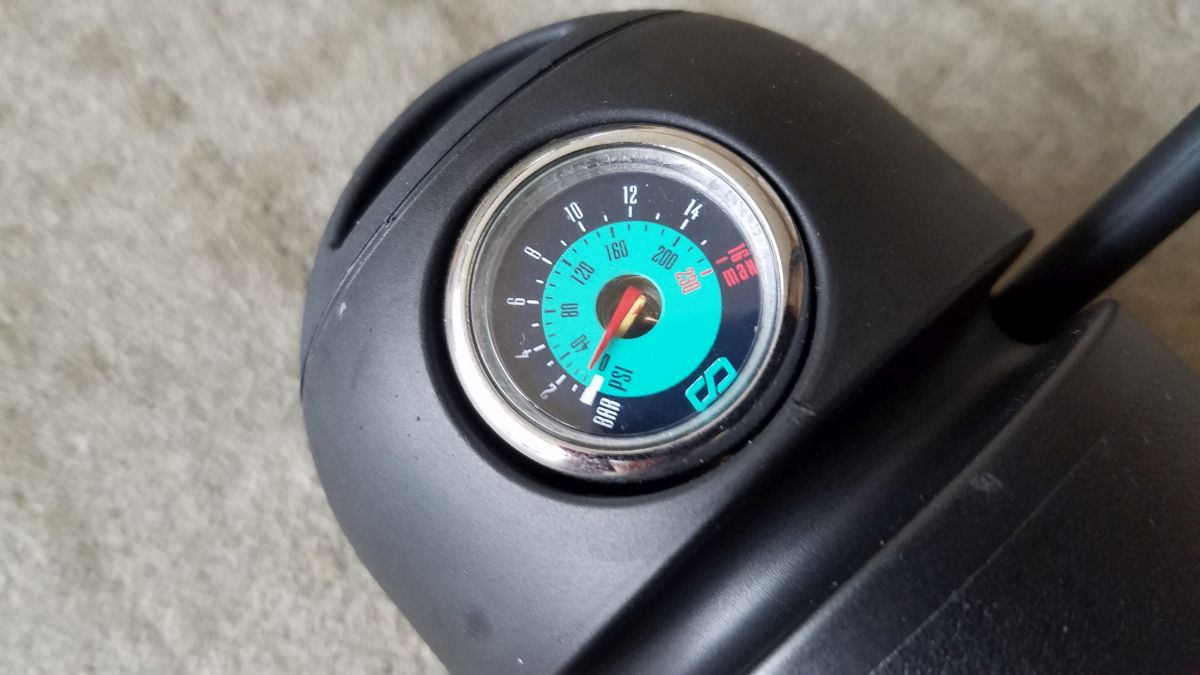 The pressured air tank of the RideAir is designed to retain pressure even when it’s stashed away in storage for a decent amount of time. 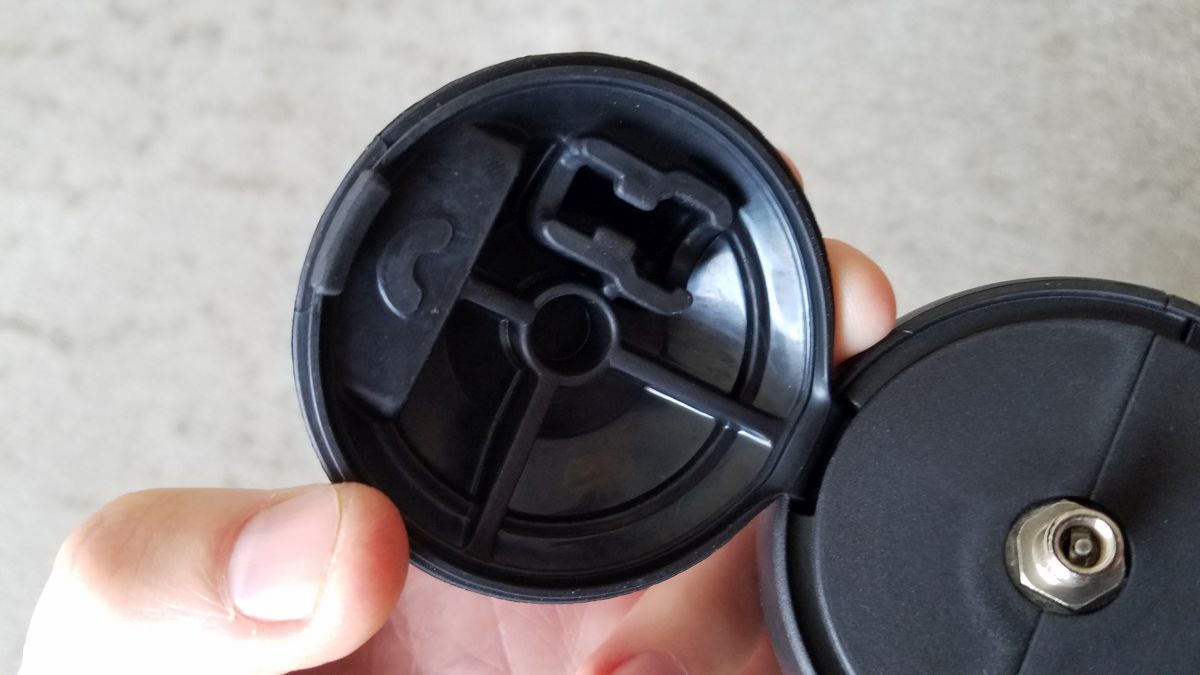 Beneath the RideAir’s lid, storage for the Presta valve adapter. 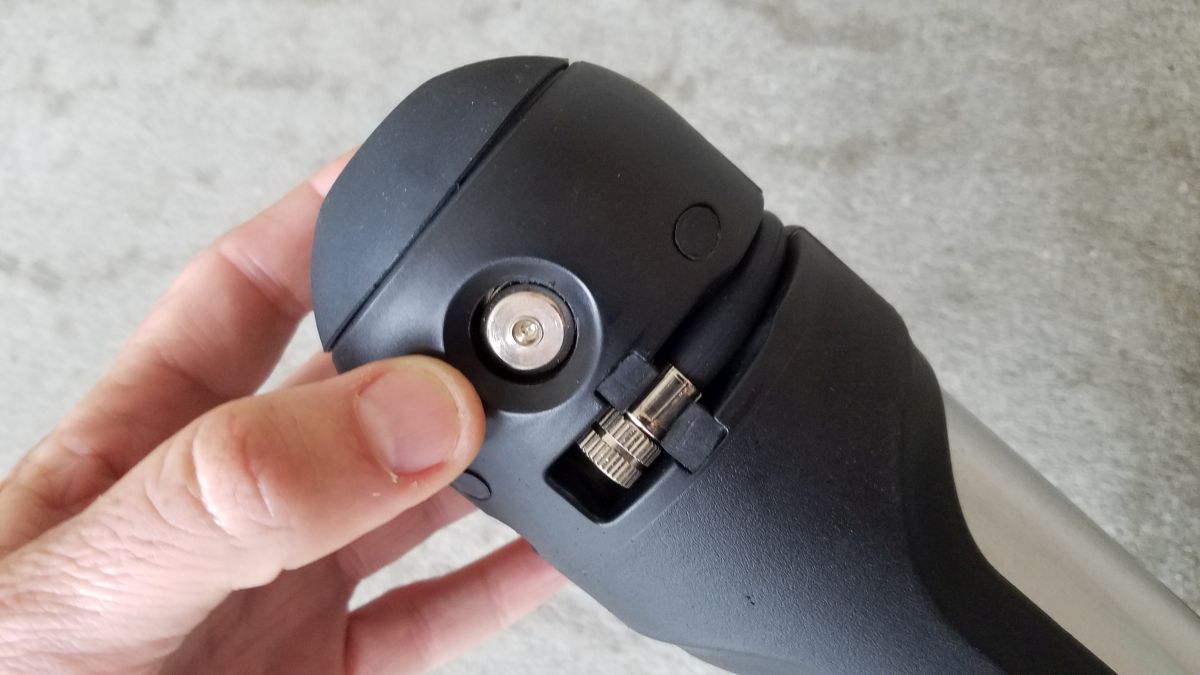 A button on the side of the RideAir controls the release of air from inside of the tank. Holding the button down for a few seconds will completely empty the tank (useful for mounting a tubeless tyre), whereas air can be released in controlled bursts if one regulates how the button is pressed. 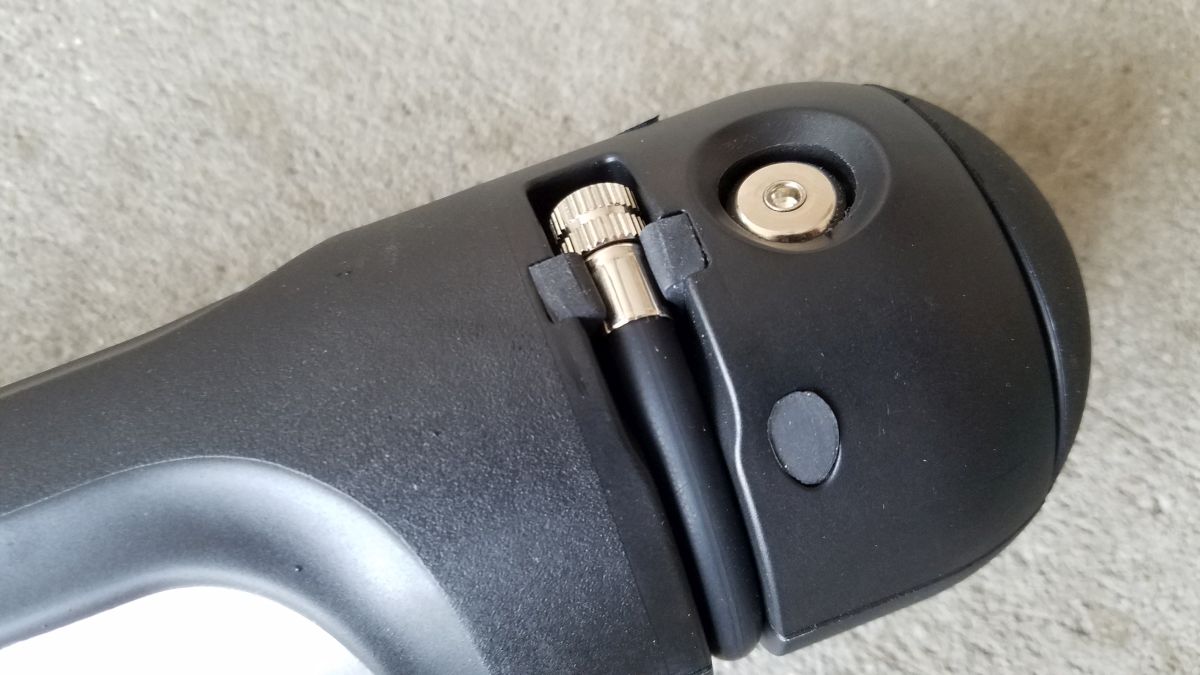 The RideAir’s inflator hose that controls the flow of all that oxygen stores neatly into a recessed slot on the RideAir’s body. 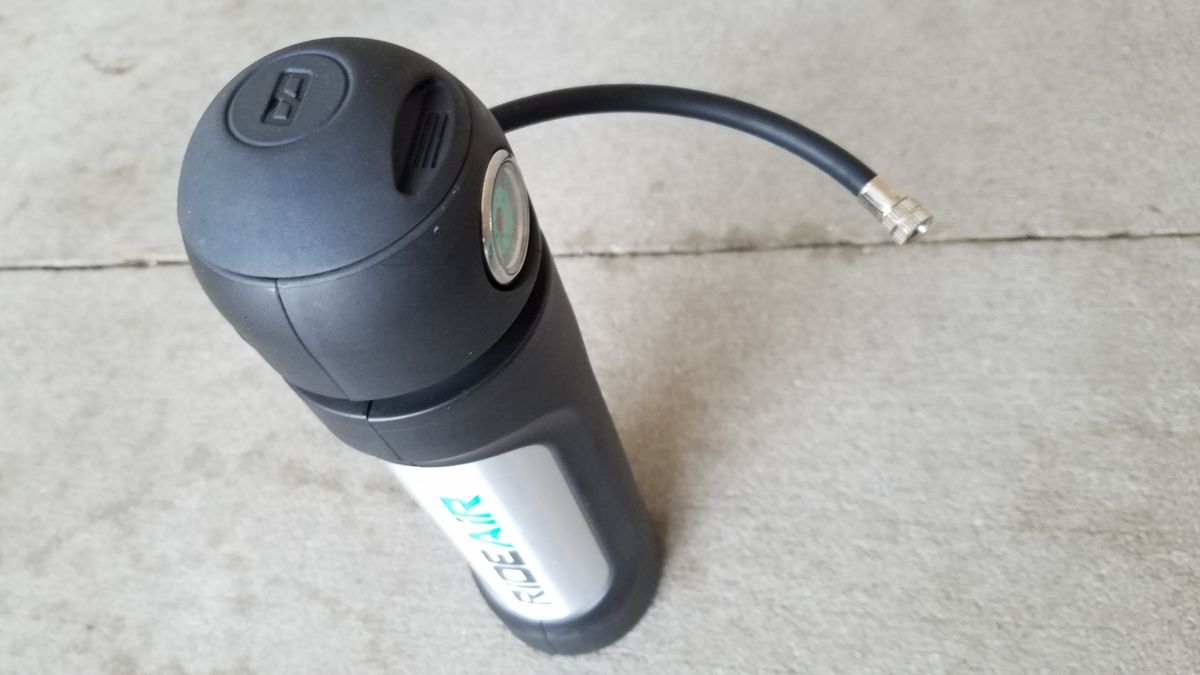 The RideAir is designed to be transportable, and with a completely full canister, could inflate at least two road tyres. The caveat with the above statement; I don’t envisage too many pavement-going roadies carrying the RideAir on their road bikes. 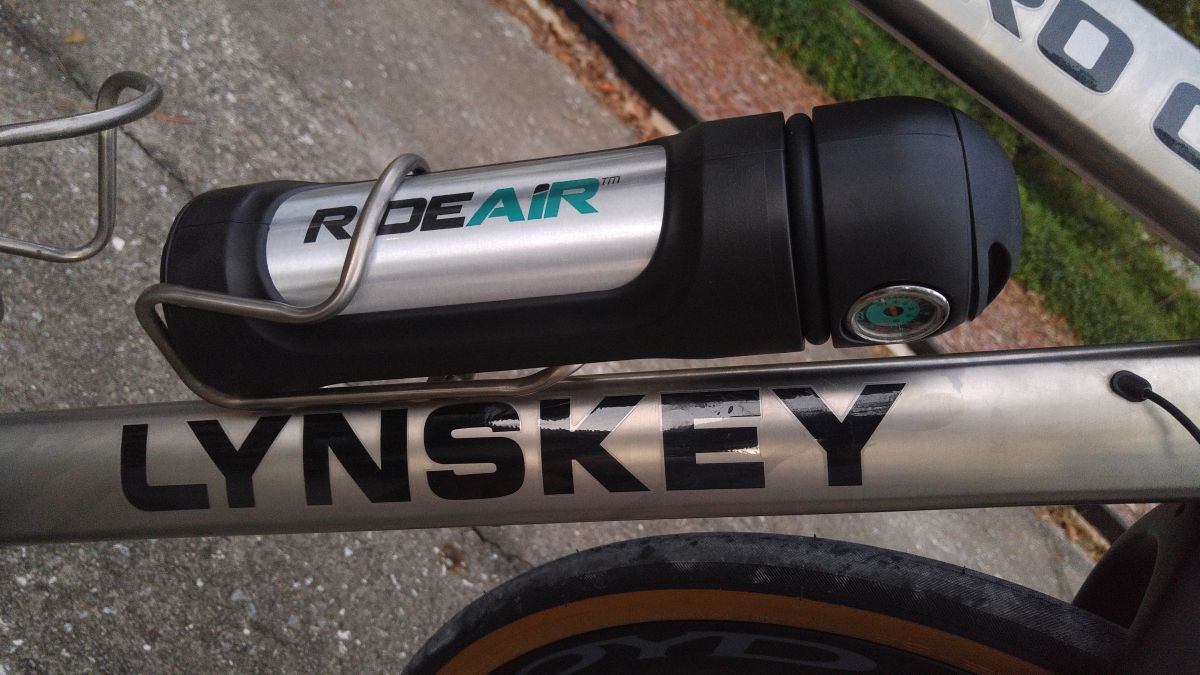 As it is, the RideAir doesn’t fit well into a King Titanium cage, which is a relatively traditional bottle cage design. 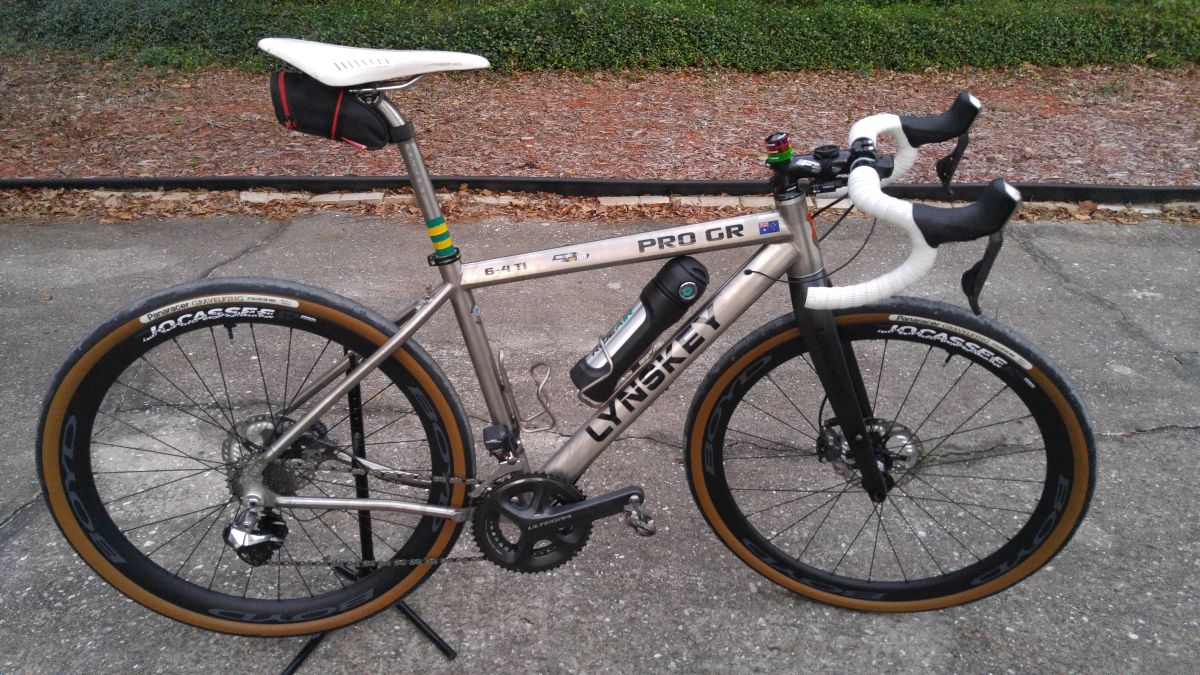 That lack of fit in a traditional bottle cage design is better illustrated in the photo above. However, in RideAir’s defense, they do offer a “RideAir Holder“, which essentially is a bottle cage optimized to hold the RideAir canister in a secure manner. 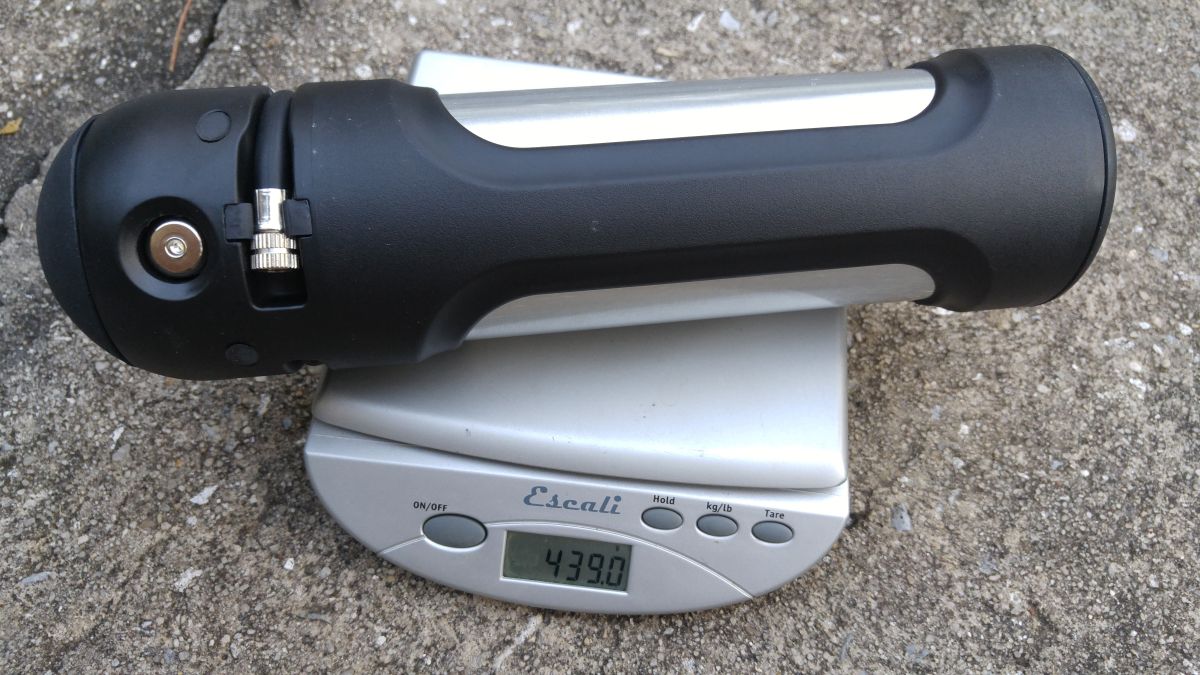 For those wondering how much RideAir weighs – 439 grams.

Roadie interest in this product aside, I can see the RideAir being very useful on a commuter bike, or bike packing or gravel rig, especially if your gravel bike possesses a third bottle cage mount. For an MTB, it could work even better, especially if you’re the type of rider who eschews bottles altogether in favor of a hydration pack. 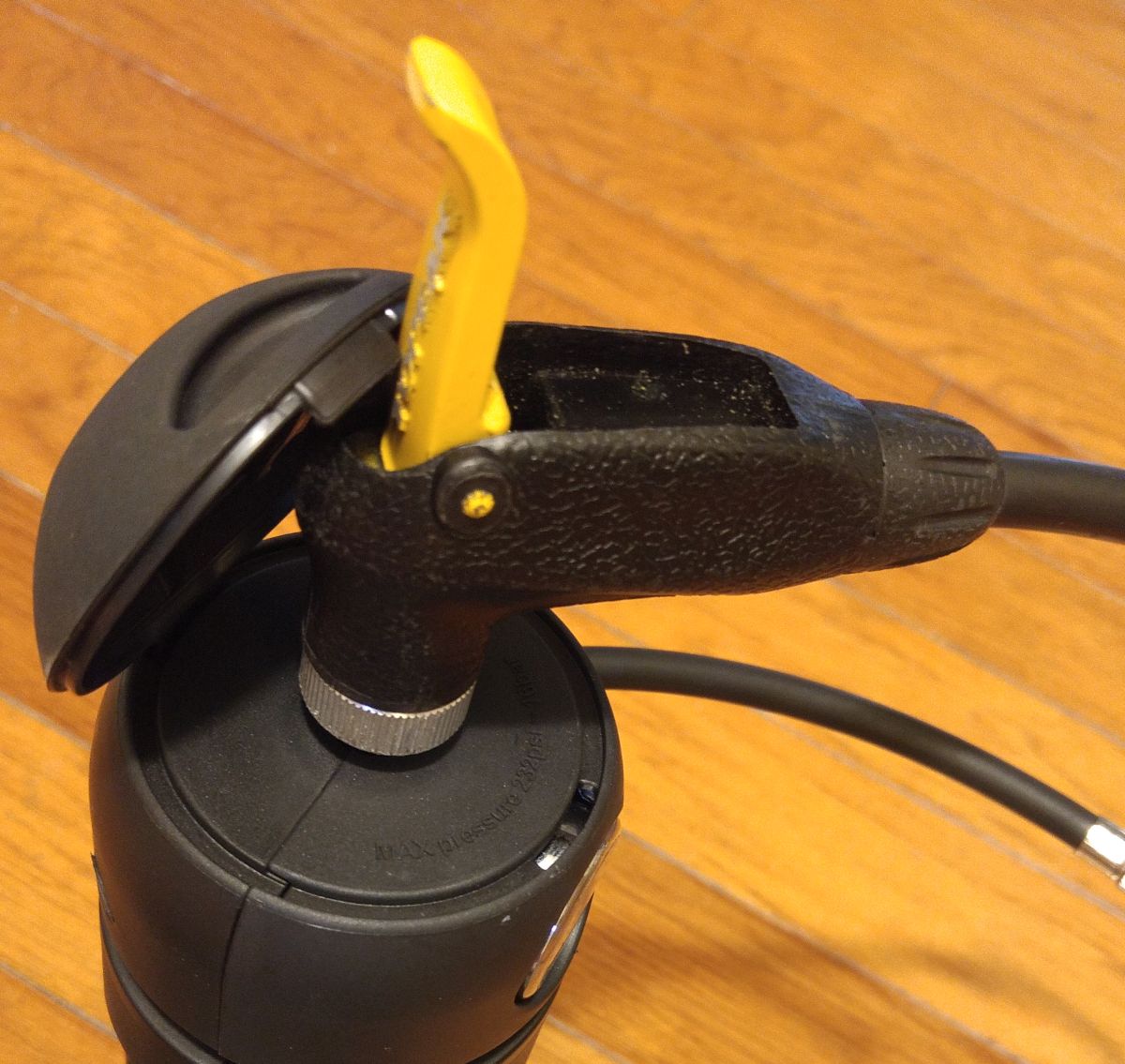 Inflation is a snap. Simply attach your pump’s chuck to the RideAir’s inlet valve, and begin pumping. 230psi is the recommended maximum, but I play it safe at 200psi. 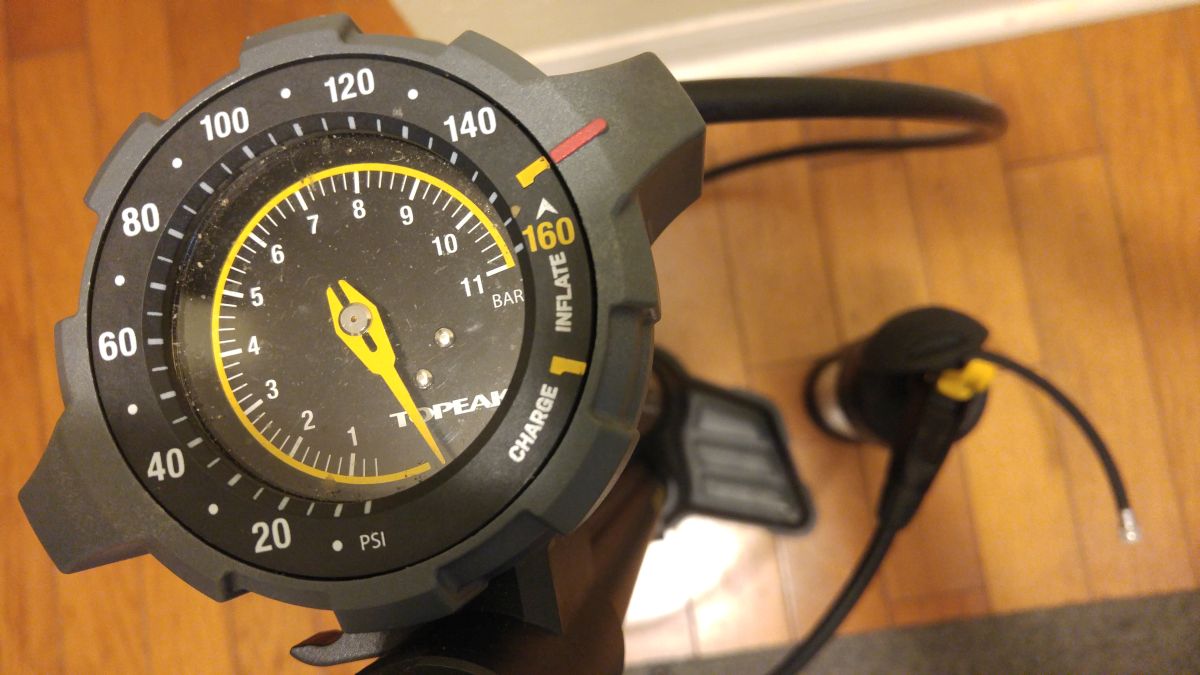 Pictured above, the gauge of my Topeak Joe Blow Booster Pump is reading above its maximum inflation with the RideAir’s tank inflated to 200psi. Just a little bit disconcerting… and 40 pump strokes to fill the tank to 200psi, at least with this pump. 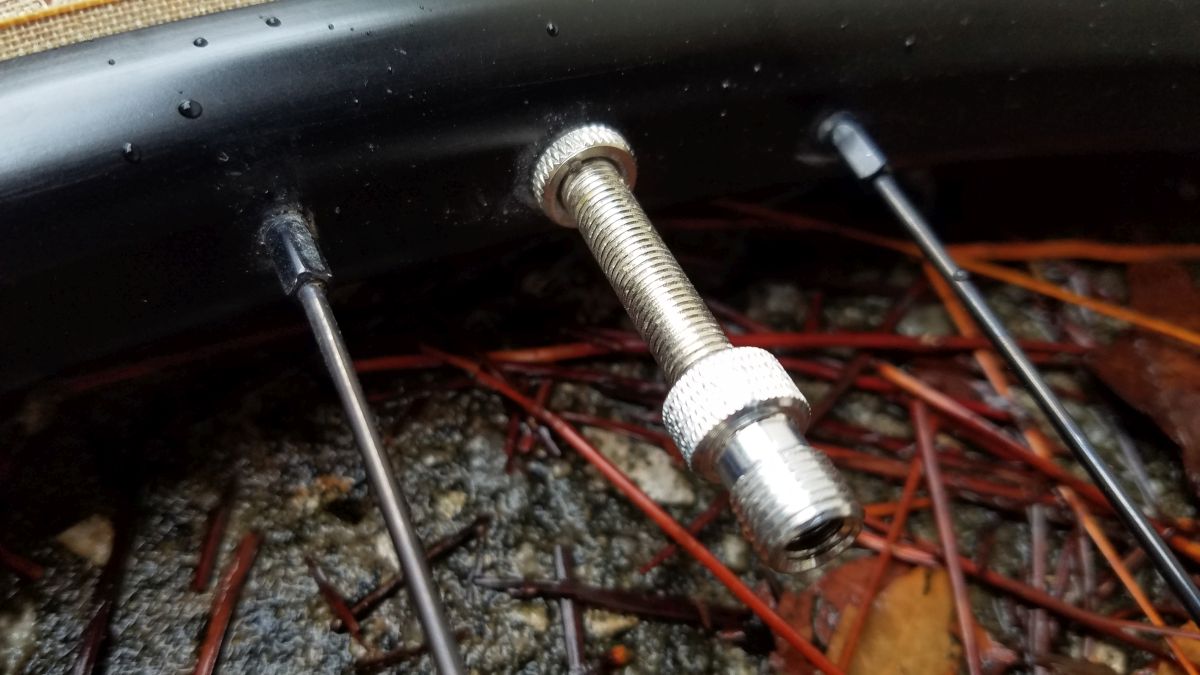 To inflate a wheel from my fleet, I had to use a Schrader -> Presta adapter. One is shipped with RideAir, although my review sample was missing it. Good thing I have a few spares laying around the house. 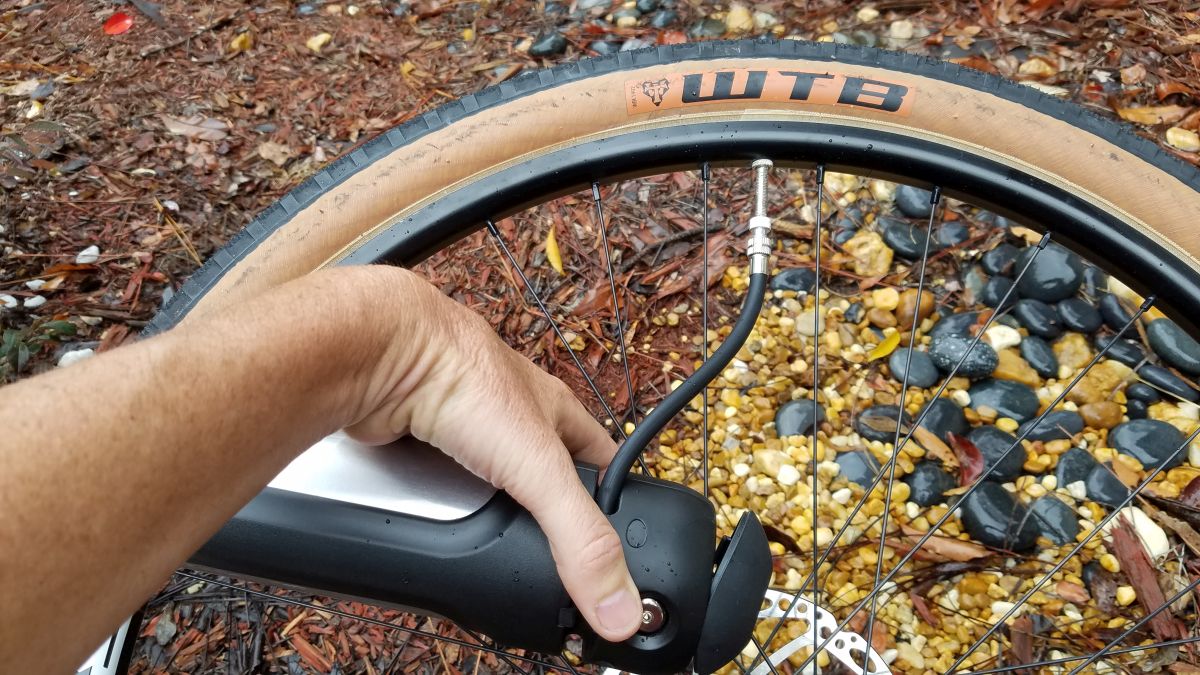 Next, screw the RideAir’s inflation hose to the adapter, press the inflation button, and watch as the tyre fills with air from the cylinder. All very simple.

But the true worth of RideAir is best demonstrated with its ability to inflate tubeless tyres. To do that, I made a short video, which you can watch below. The demonstration features me inflating a freshly mounted Panaracer Gravelking SK tyre in 700c x 40mm with zero air pressure inside its casing.

If you watched the video above, you’ll see the RideAir easily seated and inflated the Gravelking SK tubeless tyre.

But there is one shortcoming of the RideAir relating to tubeless tyre installs. It has to do with inflation of bigger casing tubeless tyres, or those that may be a little tricky to mount / seat / inflate. In these instances, removal of the valve core is necessary. 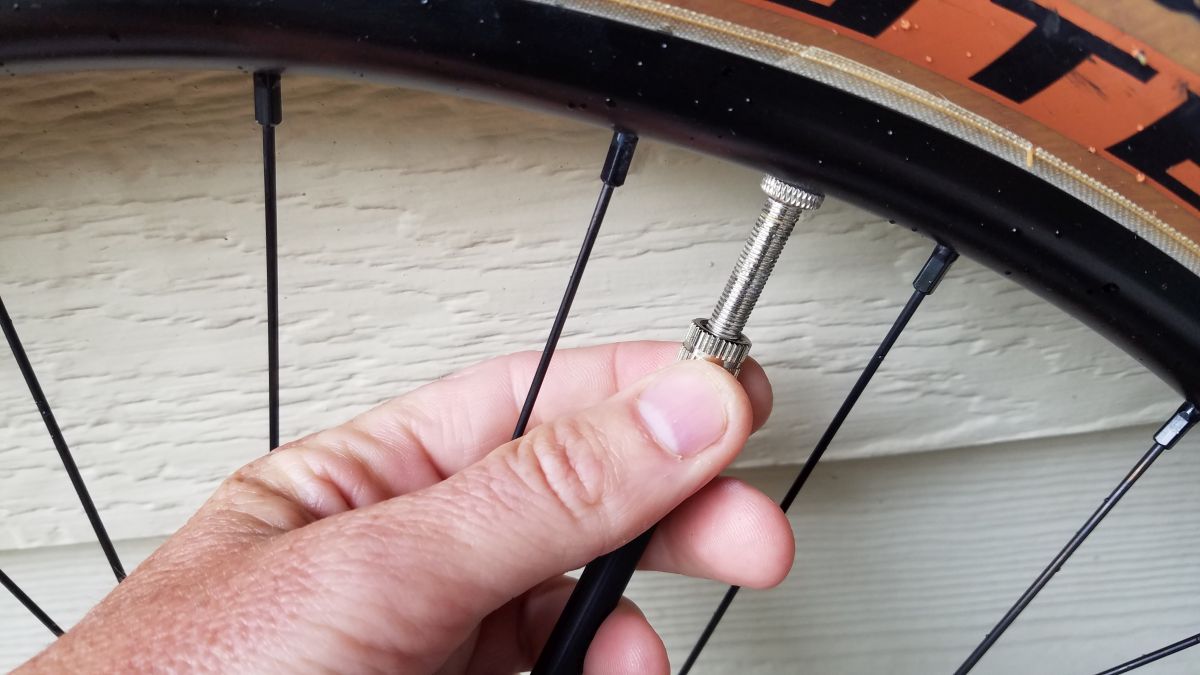 Unfortunately, the RideAir’s inflator does not screw onto a valve once the core has been removed, and thus, air leaks everywhere if you try to inflate. 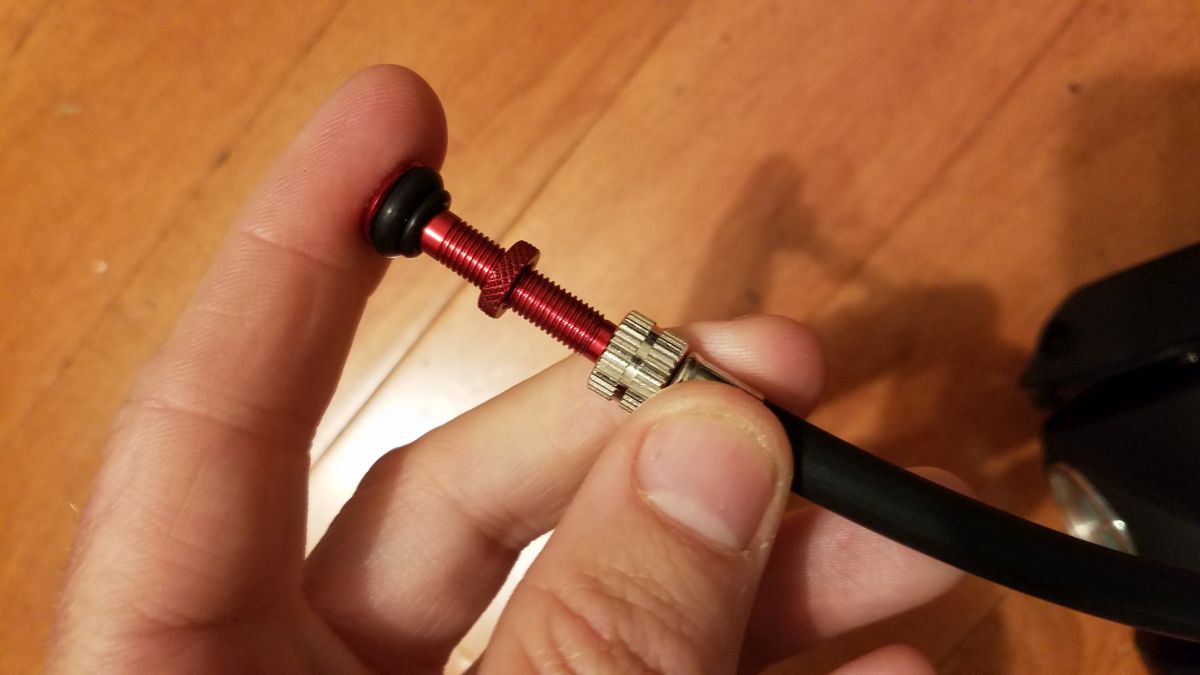 The same can be said for valves by companies such as American Classic. In this case, there is no threading towards the bottom of the valve. 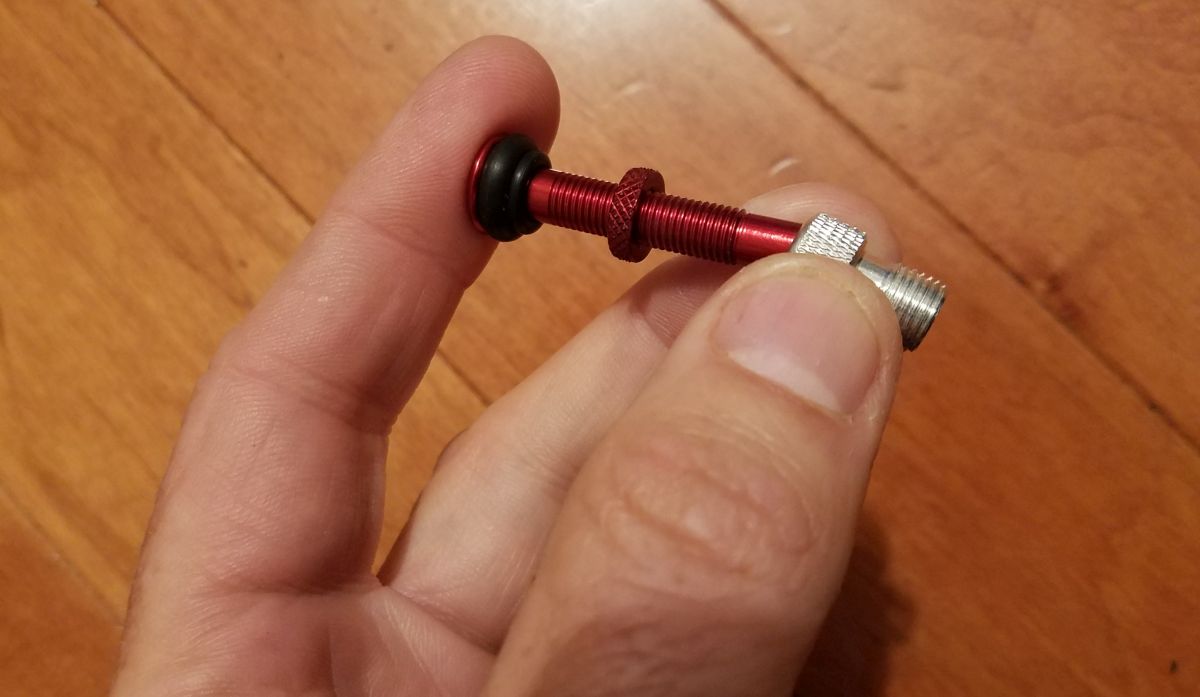 Even with the Schrader -> Presta adapter, there isn’t a snug fit. So, without a more appropriate chuck head on the RideAir (which would defeat its portability), you won’t have much luck inflating tyres with the valve core removed. But, it is unlikely RideAir was designed with tricky tyre installs in mind, but I thought it worth mentioning.

Overall, RideAir performs the task it was designed for. Portable inflation and tubeless tyre installation, albeit limited. It’s available now on the company’s online store and is priced at $US 59.99. A second model with built-in lock is available for $US 69.99.

Yeah, what is the relationship between these 2, seemingly identical, products? Did these small time Kickstarter guys license the design to SKS too, or does SKS resell it or something?

Looks good .. As a refinement I would suggest sculpting the casing so it locks into bottle cages … like a podium bottle. It does not good if it jumps out the cage and is lost.

I think my 100g pump is just fine. don’t need a 1 lb can that will only inflate 1 tire, the second flat still needs a pump anyway.

No need to hedge on filling it to 230, as it better have a good big factor of safety. Although I see no indication of ASME pressure vessel code compliance on their site, so maybe they forgot to hire a company lawyer.

Also you could take this to a high end auto tire store and get it filled with pure nitrogen, which should make your sealant last longer.

Interesting review though obviously that seems like a bad idea. Too heavy too bulky and not that convenient. Carrying a tube and pump is lighter and safer for example.

When will we see one of these canisters built into a frame tube?

Yup, stick it in the frame, pedal to inflate.
Also a removable bladder via a hatch/hole in the downtube would be perfect for water vs weight and a low center of gravity, section it to prevent sloshing.

C’mon frame guys, bit of outside the box thinking, we know your bored.

Another thing to creek squeak and annoy you while riding. thank you!

Shows how stupid the “tubeless” idea is for bicycles.

Tubeless.doesnt create any problems for trail-side flat repair (it’s just like you have tubes — it just happens a whole lot less often). Certainly no problems that this device solves; no one that uses tubeless tires needs to seat the beads on the side of the road/trail.

+1 on everybody saying “just carry a pump.” This is a poor solution to a non-existent problem.

I see a lot of negatives and not much positive. What was the problem we are trying to resolve?

none…and I would judge any local shop who would hold this in stock instead of a proper pump.

I just don’t see this filling the void (if there is one) between a small pump and a CO2 cartridge. To me it’s too big and bulky for something infrequently used.

They are distributors for Rideair in Germany
https://www.ride-air.com/pages/distributors