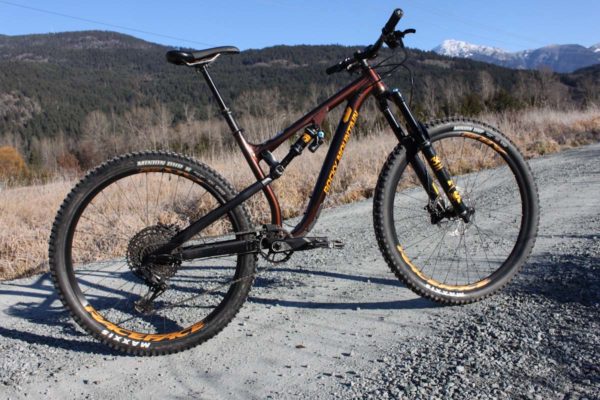 If anyone’s going to dub a bike a ‘BC Edition’, it should be built to tackle the kind of terrain that British Columbia is best known for – rocky, rooty single track with plenty of steep chutes and big slabs. With 29” wheels, 155mm of travel and a lively rear linkage, this bike rolls over bumps with ease, grabs everything it can for traction and carries downhill momentum like a landslide.

Since I live in the midst of British Columbia’s technical terrain, testing the Instinct Alloy 50 BC Edition seemed like it could be a natural fit for me. I’ve been riding the bike since late September, and I’d say Rocky Mountain has built up a highly capable machine that shrugs off the rough stuff with ease. 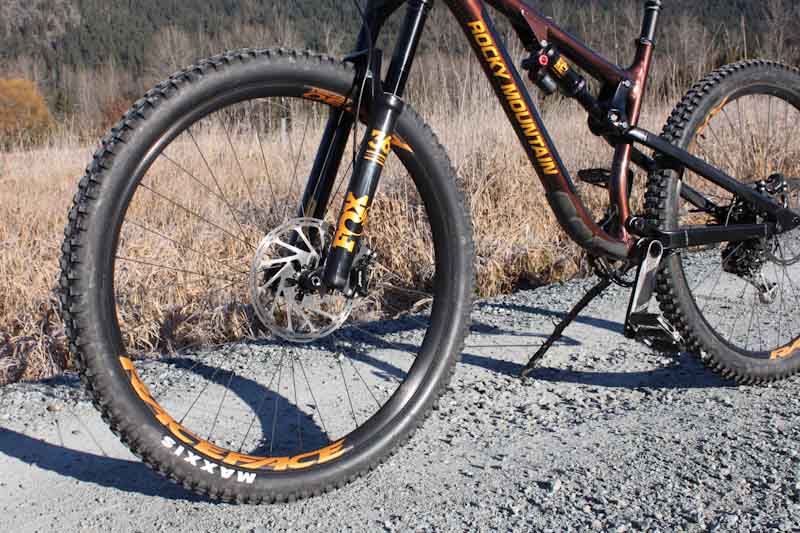 The 2019 Instinct BC Edition rolls on 29” wheels, and here’s why I think Rocky Mountain was wise to choose bigger hoops for this bike: for climbing, the big wheels carry momentum uphill and do a great job of smoothing out bumps on the trail. Their traction over rough uphill sections is amazing, and even on the tightest switchbacks I could find, the bike never felt too long or clumsy.

As for descending, as soon as those 29” wheels start rolling they pick up tons of speed! Their ability to minimize smaller bumps helps you pin it on chattery sections, and the traction from the tires pays off big time on rock slabs or in loose dusty chutes. 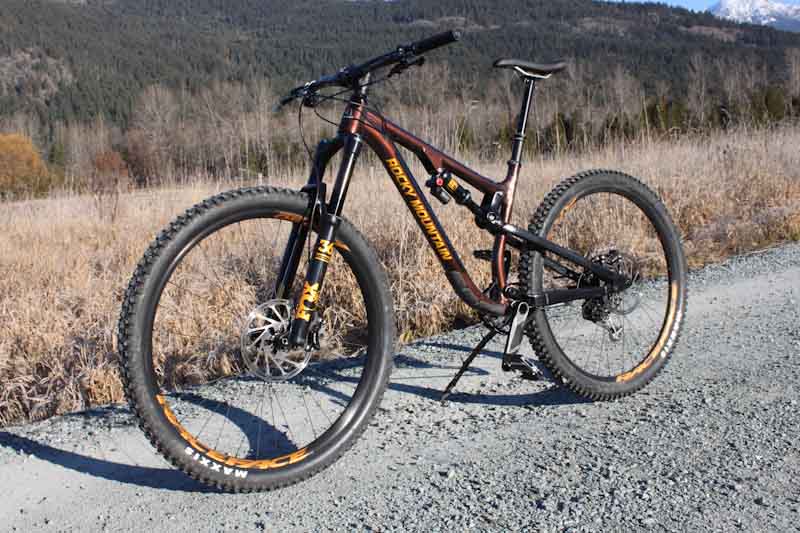 Rocky Mountain does offer a carbon version of the Instinct BC Edition, but I was testing the aluminum framed ‘50’ model. The frame offers 155mm of rear travel (15mm more than the regular Instinct), using RMB’s Smoothlink four-bar suspension linkage. The BC Edition Instincts run 160mm forks, and while they come as 29er’s they will also accept 27.5+ wheels. 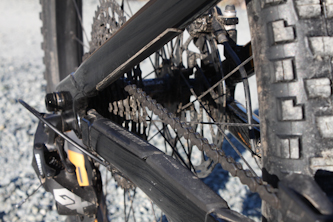 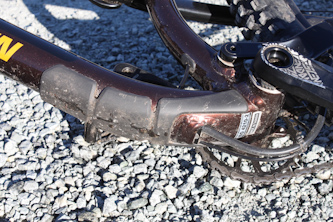 The aluminum Instinct BC Edition features Boost-spaced 148mm rear and 110x15mm front axles, and uses a press fit BB92 bottom bracket. Other frame details include internal cable routing, ISCG mounts, a water bottle mount on the down tube (with enough room for a smaller bottle), a down tube guard, protectors on the chainstay and inside the seat stay, and RMB’s sleek Spirit Guide to keep your chain on. 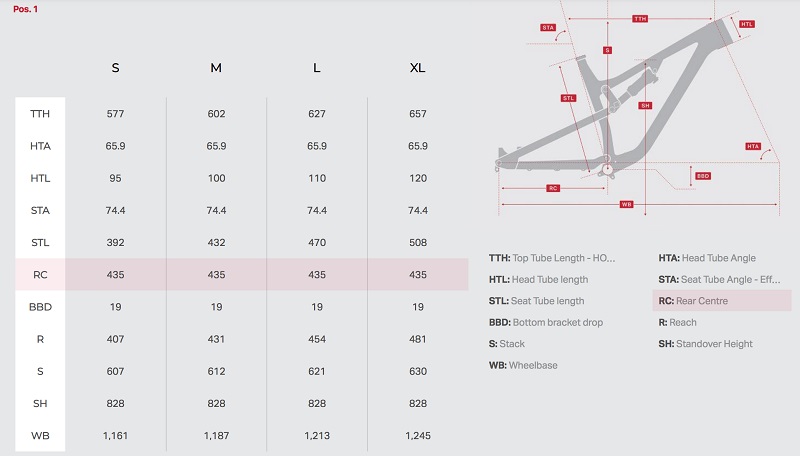 At 5’9” tall, I was riding a size medium frame. The top tube is 602mm long, but with a reach of 431mm the Instinct BC doesn’t feel too stretched out – in fact, with its effective seat tube angle of 74.4°, the frame left me sitting more upright than I would have expected. While the wheels make the bike look big, Rocky Mountain’s geometry is a bit more compact than some other medium-sized bikes I’ve recently ridden. When descending, it’s no problem to hang back over the rear wheel and dive into steep sections.

I did notice a difference in the 29er’s wheelbase versus the 27.5” bikes I’ve been riding; While getting up over the handlebars was easy, with the Instinct BC’s slack head angle of 65.9° it was marginally harder to keep weight on the front wheel while climbing really steep pitches. The rear end is quite short at 435mm, and I came away pretty impressed with how agile and playful the Instinct felt on its big wheels. 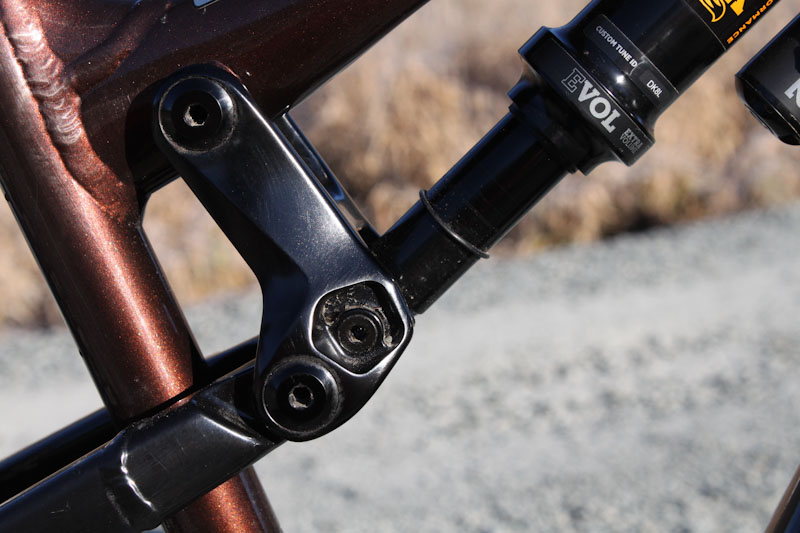 Last year I reviewed an RMB Pipeline, which included Rocky Mountain’s Ride 9 chip in the lower shock mount. This chip offers nine positions, allowing riders to fine-tune the bike’s shock rate and geometry to suit their needs. On the Instinct BC Edition, RMB skipped the chip and fixed the shock mount in the lowest/slackest position.

On the Pipeline I settled on the third position (with one being the slackest/lowest), as the shock ramped up so much in position one that I couldn’t bottom out the bike. However, on the Instinct I had no problem using all 155mm of travel. Knowing the shock was doing its job, I could enjoy the stable handling provided by the Instinct BC’s low, slack geometry.  On that note, while the Pipeline’s bottom bracket was super low and left me frequently striking pedals, the Instinct rides a bit higher and my pedals rarely clipped anything. 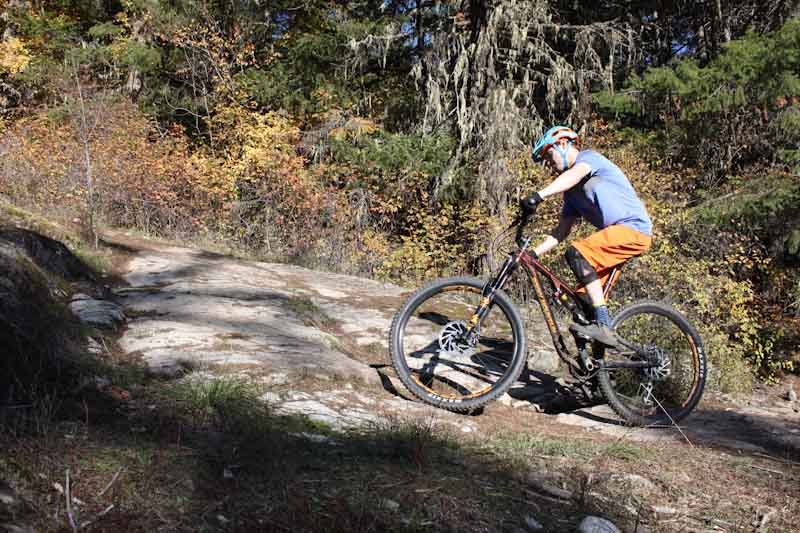 *Climbing this rock is trickier than it looks, but on the Instinct BC Edition I cleaned it on every attempt at getting this photo!

As you’d expect from a 29er, climbing was great on the Instinct BC Edition. Rocky Mountain’s lively Smoothlink linkage provides great traction, keeping your rear tire glued to the trail as you bobble over technical terrain. Several times when I thought I might spin out, that big rear tire stuck to the roots and rocks and kept me on the bike. 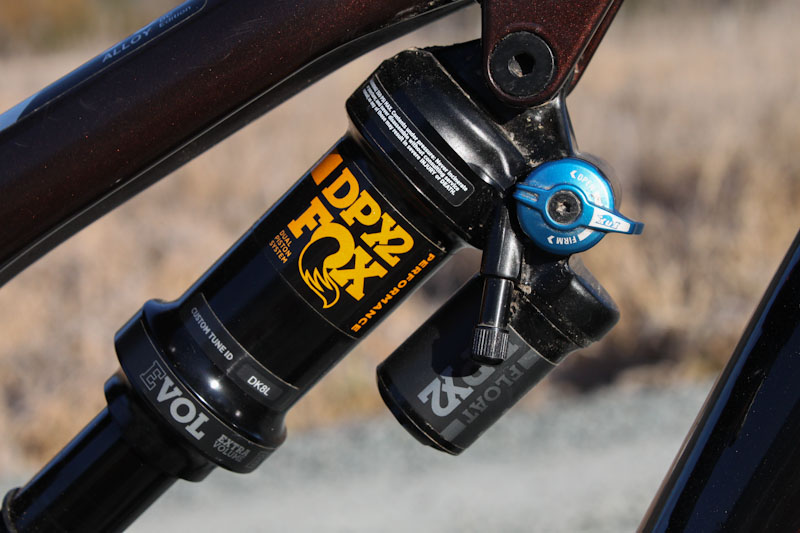 The Fox Float DPX2 Performance rear shock offers three settings, and the stiff and climb modes were a bit softer than some other shocks I’ve ridden. I’ve found other three-position shocks too stiff for riding singletrack in their firmest setting, but the DPX2 did a great job of providing pedaling support while still taking the edge off bumps nicely. Stiff mode limits you to about 60% of your travel, yet does a great job of absorbing impacts without ever feeling clunky.

Most of time, climbing was spent in the middle mode, and I noticed after pedaling up one particularly rough trail I had used about 80% of the shock’s travel. The bike still pedaled pretty well in this setting, so I think which mode you climb in comes down to the rider’s preference (or the trail at hand). Would you prefer a softer ride with incredible traction, or would you opt for more efficiency?

Given the active nature of Rocky’s linkage, I wouldn’t recommend climbing with the shock wide open. Left unassisted this bike will produce noticeable bob, and since the shock absorbs impacts quite well in its climbing modes you’re best off letting it help you pedal uphill. 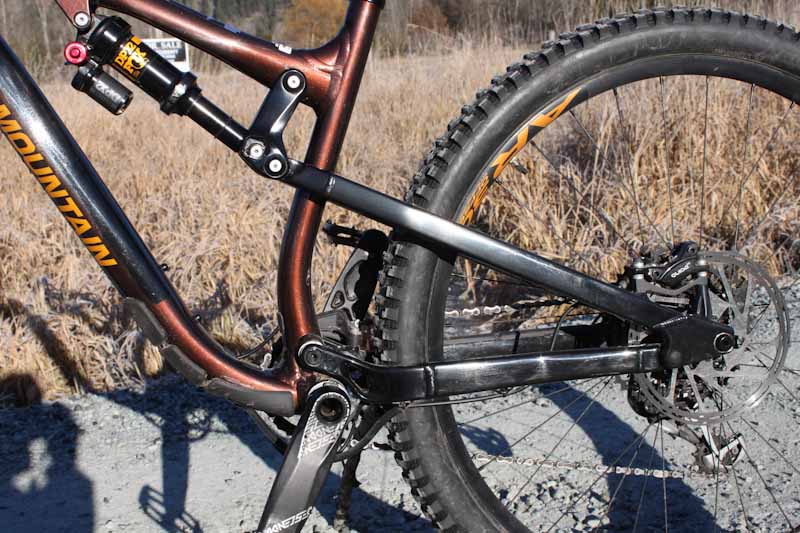 After riding two Rocky Mountain trail bikes recently, I’ve found their rear linkage provides a playful ride, rather than a plow-through-the-rough feel. Under the four-bar Smoothlink suspension you’ll feel the trail inputs, but the rear end reacts quickly to them. This fast action helps keep the wheel glued to the ground, especially over chattery sections of smaller to medium sized bumps.

Between the bike’s 155mm of travel and 29” wheels, big hits feel smaller than you’d expect them to. I have ridden other linkages that do a better job of smoothing or rounding out harsh impacts, but the Rocky’s rear end is still quite good at handling larger bumps and keeping you on your line. 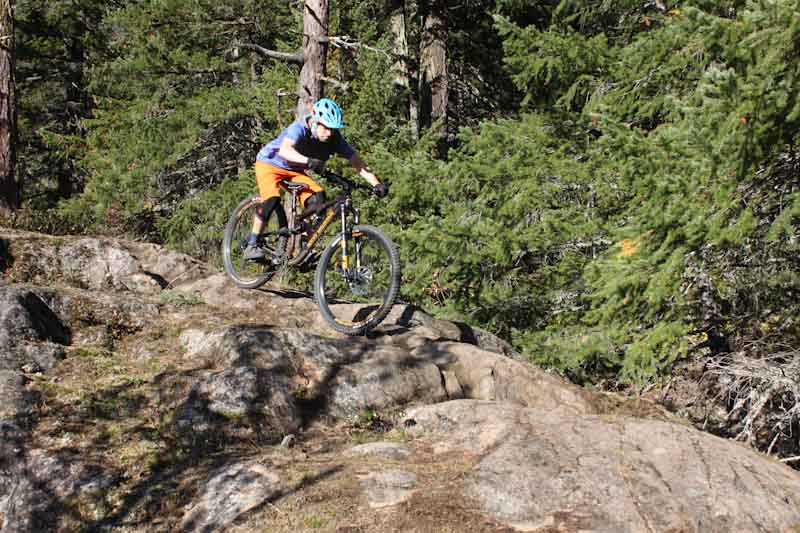 I was surprised to find the shock felt more linear than expected. Based on my experience aboard the Pipeline, I wondered if the Instinct’s fixed shock mount would make it hard for me to bottom this bike out. However, in wide open mode the DPX2 shock stayed plush throughout its stroke and I had no problem using every millimeter it had to offer.

I really enjoyed the poppy, playful ride of the Instinct BC Edition. Even with the big wheels, this bike leaps off lips and bumps with ease, and eagerly springs out of berms. While the rear shock gives in immediately when faced with an impact, it still provides enough support to help boost the rear end when you pop off a root or jump.

Again, the effects of the big wheels provide some advantages for descending; the longer wheelbase makes this bike feel super stable at high speeds, which you’ll reach very quickly once you’re rolling downhill! Traction for crawling rock slabs or navigating dusty chutes is incredible, and the slightly slower cornering was really never an issue after a short period of adjustment to the 29er. 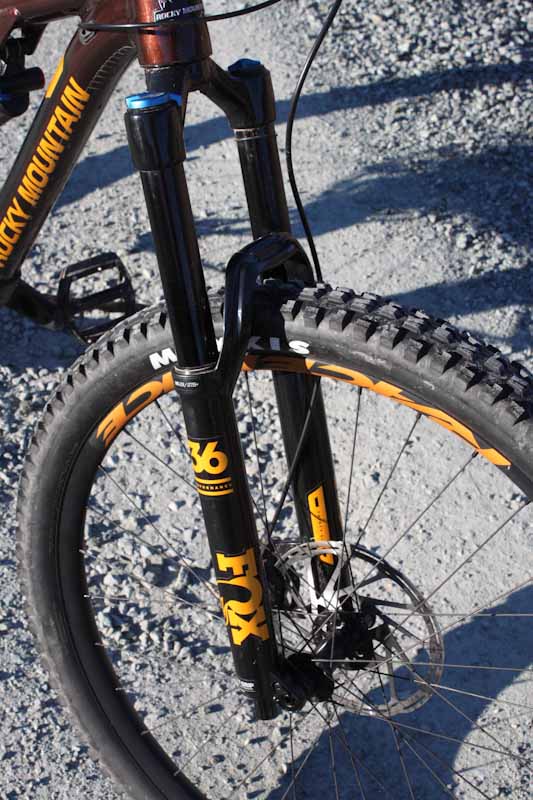 The Instinct Alloy 50 BC Edition comes with a pretty solid build spec for its price. Up front, a Fox 36 Float Grip Performance fork capably sucks up the bumps. I’m a lightweight guy at 140lbs, so I had to pull a token out of the fork to get full compression. Once tuned, the fork provided great small bump sensitivity and ate up big hits without a whimper. This fork offers a low-speed compression adjustment so you can firm it up if desired. 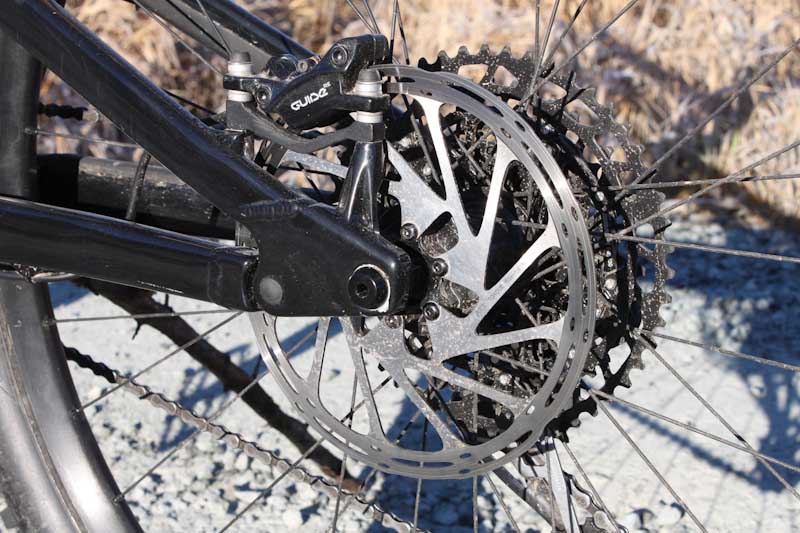 Sram’s GX drivetrain ran nearly flawlessly, and the 12 speed cassette provides a massive gear range in fine increments. Throughout my two month test I had no issues with the Descendant cranks or any creaking from their press-fit Dub bottom bracket. The four piston Sram Guide RE brakes on 200mm rotors were the grabbiest Avid/Sram brakes I’ve ever ridden, and had no problem bringing the Instinct to a quick halt. 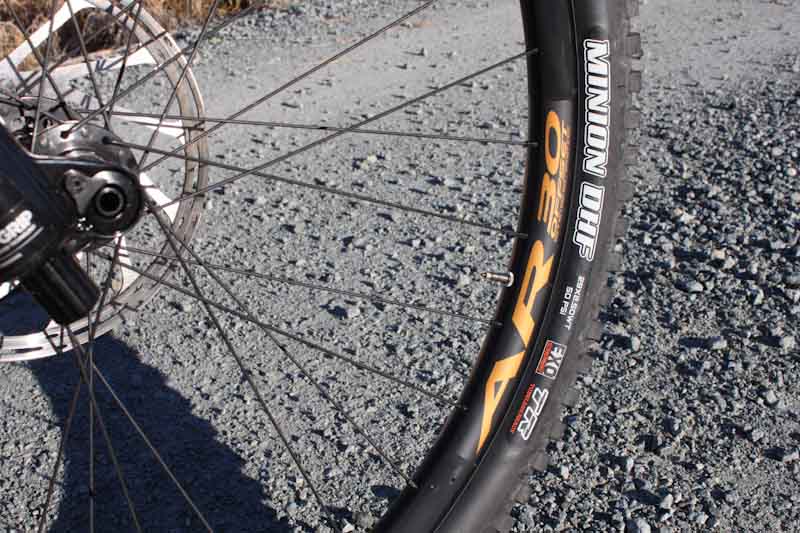 RMB wanted to put a solid set of wheels on the Instinct BC Edition, and the Race Face AR 30 wheels are doing their job well. Even compared to the 27.5” bikes I’ve been riding, they feel very stiff through corners and rough terrain. They’re still running straight and true, and the rims have suffered no damage except one scratch on the rear’s finish. The Maxxis Minion tires (DHF 2.5” up front and a DHR 2.4” out back) are my current favorites for sheer traction, and the 30mm inner width rims spread them out to further optimize their grip. 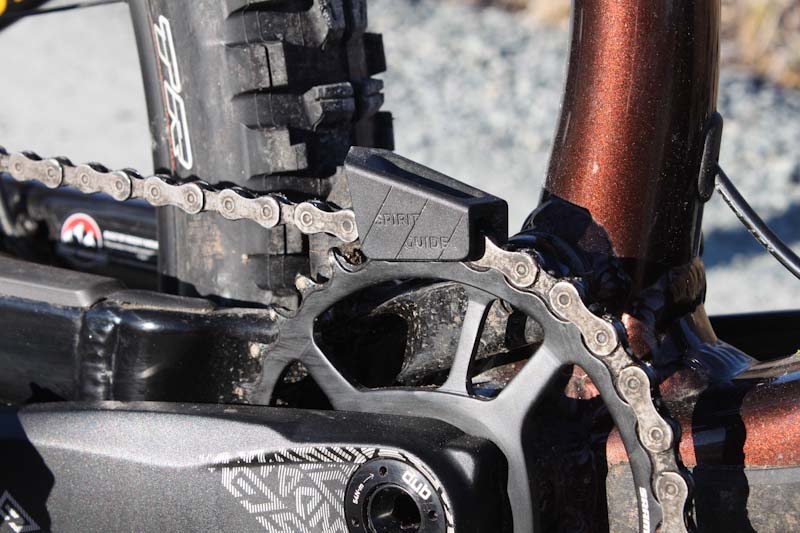 Race Face’s 150mm Turbine R dropper post got a bit sticky on me twice on near-freezing days, but worked perfectly well in warmer temperatures. The WTB Volt Race Seat was actually pretty comfortable, so I wouldn’t rush to replace it. To finish the build, Rocky Mountain supplies some components like the 780mm handlebar, 50mm stem, grips, and their neatly integrated Spirit Guide chain guide.

If you enjoy riding rough, technical trails Rocky Mountain’s Instinct BC Edition has all the tools it needs to make challenging terrain feel a little smoother and easier to tackle than it should. With a solid suspension package, 12 speed drivetrain, powerful brakes and a tough set of wheels I’d also say the aluminum 50 model offers great value for its $3699 USD price tag. The Instinct Alloy 50 BC Edition is available in S-XL sizes, in the color you see here only.