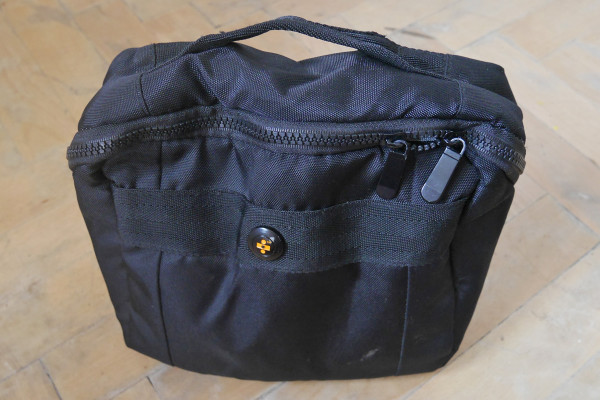 From the minds of a top-level masters road and track racer from the north of England who’s worked for years developing sports nutrition, comes a small portable solution to race prep in a tiny bag. The Secret Training STRIP Kit is a small race day pack that packs all of those small goods to get you to the start line and get cleaned up after the race. Envisioned as a small step to give amateur racers a bit of a taste of a pro experience, we’ve used the STRIP kit over the better part of the last year, and almost can’t imagine rolling up to an event or finishing without it.

Unzip the pack after the break to see what’s inside, and to get a sense of how it has helped us compete… 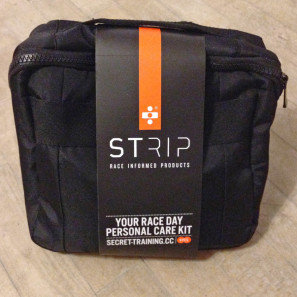 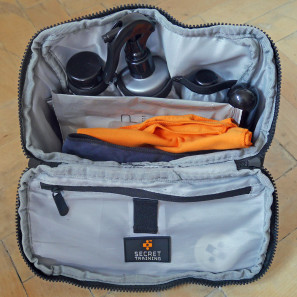 The £50 STRIP Kit from Secret Training is pretty basic in concept, but it’s the thoughtful and inclusive execution that sold us. The simple, rugged nylon bag is small enough that it doesn’t really take much space in our bigger event bag, and lives throughout cross season in the trunk of the car.  At 25 x 22 x 10cm, the bag has a single large compartment with stitched in pockets to hold the majority of its contents and a zippered top pocket for some smaller items, and leaving room for more.

The main pocket houses a pair of microfiber towels and a small package of hygiene wipes (wet wipes without that characteristic baby smell) that come in handy for knocking the grime off and getting the sweat out of the eyes after an intense effort. In the small pockets you get lip balm, a spray bottle of post-race wash solution, warming oil, hand sanitizer, and sunscreen. Add in a tube of chamois creme and a small tin of safety pins and we were ready to race. While we never used everything in the bag all at one race, after almost a year of traveling to everything from road, cyclocross, cross-country, and enduro races, to a number of events as spectators we’ve been happy to use everything in the kit. All of the products in the bag were developed by Secret Training especially for cyclists, and often times they end up with fewer or more straightforward ingredients than most of the competition. I wouldn’t say that any of the individual items stood out so much that I would replace some other standard I already used, but everything performed well enough that I never thought to replace anything with any alternative products. 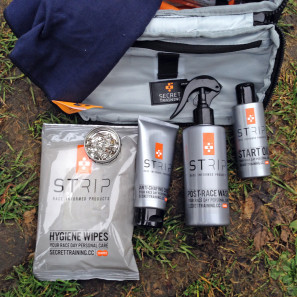 But what really sets the STRIP Kit apart is its simple inclusiveness. For the price it wouldn’t be too easy to reproduce, and was always welcome after a race to have everything at hand. We used the kit the most (and got the most out of it) during the cold wet cross season when we would finish a race and have an hour or two drive to get home. The chamois creme and start oil got us ready and through a number of cold races. The clean-up post-race was enough to get us home comfortably, and there’s much to be said for the peppermint and eucalyptus in the wash that left our faces clean and gave a little boost after a race that otherwise sapped all of our energy. Based in one of the the wettest regions in England, it’s no wonder that Secret Training had some good testing grounds to figure the STRIP kit out.

In the end, our review of the kit can be summed up in the fact that it is now a permanent presence in our pre-race prep (and will continue to be for at least a couple more seasons.) While we’ve run through a few of the individual elements of the kit, like the wet wipes that made it through a full cross season or the sunscreen that didn’t get touched for half a year and then got used up in a month and a half of unseasonable summer heat, all of the individual bits are available for reorder at mostly reasonable costs. We’ve since swapped those two with non-cyclist-specific replacements (only because we had replacements already on hand), but the basic kit goes on. The small nylon bag even has enough expansion room in it that we have added in a small first-aid kit and dropped in a tube of chainlube for those times when our race buddies forgot to prep their bikes. I’d guess that the STRIP kit isn’t likely to win any races, but I’m pretty confident that anyone who buys one will end up relying on it for several seasons to come.

I’m so confused. There’s no Rapha branding on this. How?