I’ll make this easy: If you’re looking for an all-out speed machine to make every ride faster, go get the new Specialized Tarmac SL7. And particularly, the S-Works SL7 with the Roval Rapide CLX wheels. I’ve set higher average speeds for every ride I’ve done on it and enjoyed every minute of it.

If you’re also looking for a bike that’s perfect for group rides and long distances, then keep reading. Because that’s where the nuances of the new Tarmac come into play…

I covered all the tech details in my launch story, and you can check out all available models, specs & pricing here. The video above gives a nice overview, and I’ll get into my full ride impressions below. Here’s a quick recap if you don’t want to read those, along with some detail shots regarding setup. There’s no arguing the bike’s ultra-clean looks. Top models are available with either Shimano Di2 or SRAM AXS groups, but it won’t matter for looks as any wires, cables and hoses are all hidden from lever to derailleur to brake caliper: While your bike will come fully assembled from the shop, our review bikes arrive in a box with some assembly required…usually not any more than you’d need to do to pack the bike for air travel, so it’s worth seeing how their Aerofly handlebar and stem hide everything.

Rather than a one-piece design, the bar spits any lines out right at the stem. The stem uses a bolt-on plate to capture them and redirect into the steering tube’s top spacer.

If that ~90º bend in the hose seems a bit to sharp for mechanical shifting, you’re right. Which is (likely) why all SL7 Tarmacs use either Di2 or AXS groups. There are no other cable ports to accommodate any shift cables…for that, you’d have to drop back down to the SL6 models, which carry over for more affordable builds. …from the top, it’s seamless.

It’s worth noting my average speed for this ride: 18.2mph. Over 41.1 miles, on a solo ride, with almost 2,000′ of climbing. On my other road bikes, my average for something similar is generally closer to 17mph. More on this below. 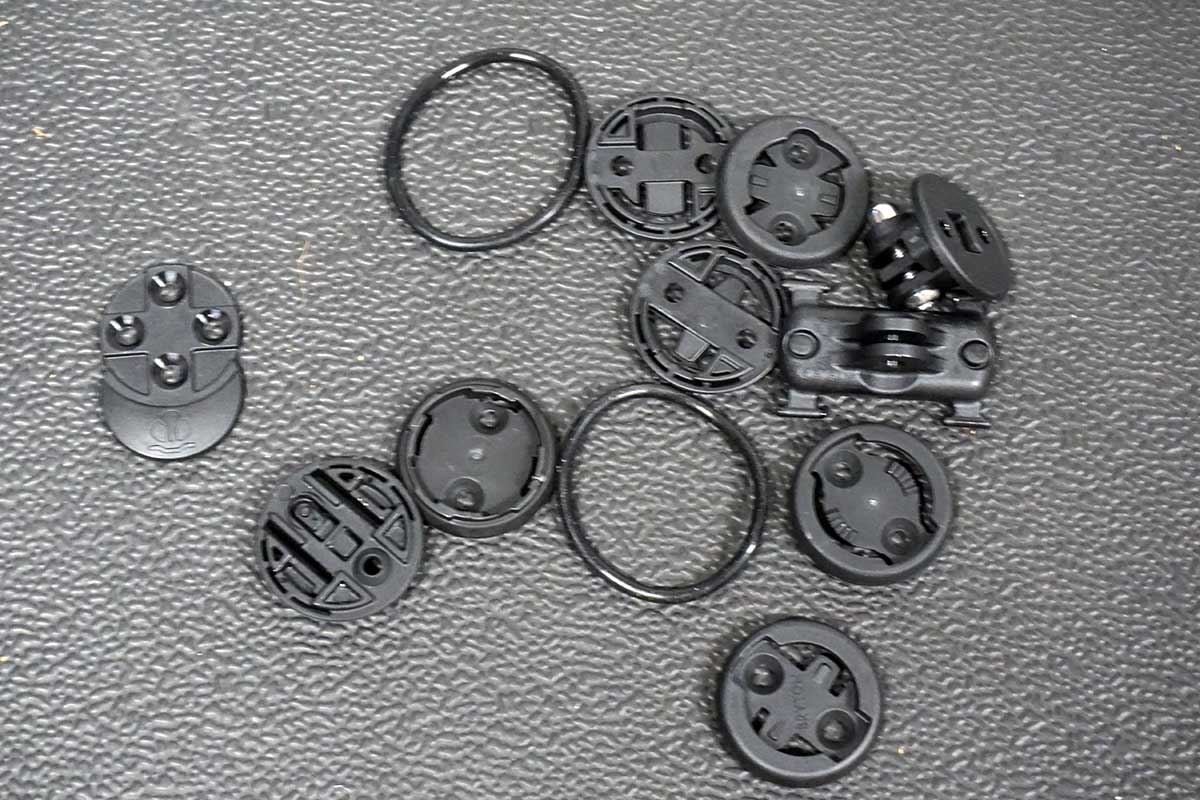 I like the ergonomics of the handlebar, though have to admit that long stretches with palms flat on the hoods caused a bit of numbness. Most of my gloves have no or little padding, though, and these bars are designed to end your tape as shown.

It comes with an out-front computer mount that sticks through the stem’s faceplate. It’s long enough to fit most GPS cycling computers, and mounts for just about anything you likely own, plus bolt-on GoPro style mounts for lights or other accessories underneath. The seatpost is proprietary, and aero, but not so deep you can’t strap a normal saddle bag to it.

Again, just a super clean bike with smart integration. Yeah, it’d take a bit more to service it, but more and more top level road bikes do, so whatever. It’s a good reason to support your local bike shop. The new Tarmac’s aerodynamic claims come not just from the frame, but from the complete bike built as a system. So, to get the biggest benefit, you’d want to opt for the S-Works level bikes. Here’s why:

The Pro models keep the Aerofly II bar, but switch to Rapide CL wheels, a slight downgrade from the Rapide CLX wheels used for S-Works. The main difference is the hubs, with DT 350’s used on the CL with lower engagement internals, non-bladed spokes, and about 110g more weight. The Rapide CL wheels are not available aftermarket, but the CLX are. It’s a bit of a shame this bike’s tires can’t be converted to tubeless, but then again, neither can these wheels. They’re both designed as tube-type only. Which is obviously good enough to win races, but personally, I think tubeless would provide added comfort and utility benefits for most riders.

My only other nitpick was the rear brake was a little noisy…you can hear it in the video. Fortunately, tightening the two bolts that attach the caliper to the chainstay eliminated this. For a race bike, the Tarmac is very well mannered. Responsive and nimble without the quirks I’ve come to hate about a pure crit bike. Meaning, it’s stable and smooth enough for long straights and safe group riding. But it’s still able to carve a quick turn and rail corners.

And so we’re back to aerodynamics.

Race bikes, including this one, typically favor quick reaction time to fondo-like cruising stability. And they should. The Tarmac doesn’t overreact to normal inputs, which is nice. But, it does react quickly to inputs, even if those inputs are false alarms.

Here’s what I mean: The Tarmac, as tested, is applaudably stable in cross winds. Nevertheless, my (and likely yours, too) gut reaction is to correct for sideways gusts. Maybe I’m slightly overcorrecting, or just leaning into it, but those micro adjustments have immediate repercussions that I’d not want to have to deal with on “endurance” rides. Which isn’t really a knock against this bike. It’s just that it’s the only real issue I felt worth a bunch of words, and only applies if you’re buying this bike hoping for it to be something other than a race bike. Think of it as a race bike that’s really fun to ride on most rides. And it is fun. And fast. I felt faster. And the data proved I was faster.

Maybe it’s because this bike made me want to be better. To be faster. Maybe that made me push myself. But ride after ride, whether tired or fresh, windy or not, I was consistently setting higher-than-normal average speeds. And that’s fun.

Unless you’re a bug: Standing up to sprint, I could easily pull the rear wheel off the ground…it’s that light. The frame feels efficiently stiff, but not punishing. The integrated Quarq powermeter synced quickly with my Wahoo. The 26mm wide tires felt good on mixed-quality pavement.

Overall, the new Tarmac SL7 S-Works was a bike that proved fun to ride, pushed me to go faster, and rewarded it with sharp handling and ego-boosting results.

I sat on one recently and it felt very stretched out I think due to the forward-angled bar I wonder if they accounted for this in their geometry – a 58 felt like a 61 to me which is a bad thing as a 56 has too much drop for me. Seems kind of dumb to add so much reach with a bar. Plus the massive shifter grips added even more reach – but I am used to campy so shimano and sraam both feel clunky and wonky to me – but I’d say add at least 10cm I’d reach to account for both bar and shifters

I had the same experience of increased avg speeds when i upgraded from a 2011 SL3 with Reynolds MV32 wheels & 23c GP4000 tires to a 2018 SL6 Pro (pre SL7) with CLX 50 wheels & 25c GP5000 tires. More aero frame and wheels with faster tires. It is a speedster! Wish mine had the hidden cables for yet more speed but i’m a rim brake/mechanical shifting luddite.

The reach of the SL3 and SL6/7 are similar but the stack is lower (shorter HT and fork) and the SL7 has a 1cm shorter HT than the SL6. The SL6 is considerably more comfortable and i believe i can notice the slightly lower BB… a bit more stable, more ‘in the bike’ feeling vs ‘on top’ of it.

The upside of being a luddite is my bike with pedals, cages, computer mount and sensor weighs 14.2 lbs and the rear derailleur is under $300 (not the $500+ of electronic rear der).

I’d be interested to hear more details about your 14.2lb bike: framset, Wheels, etc? How does a luddite build such a light bike?

Surely the next step in integration on road bikes is a hidden compartment for tube, tire levers, co2 cartridge? All this nice design only to strap an ugly seat bag on the bike doesn’t make sense. I bet that’s going to be realeased on the 2022 model.

Specialized road SWAT would certainly be a logical next step. And provide aero benefits too!

I believe internal storage adds too much weight for use on a brand’s flagship “lightweight” race bike.

Trek presented this hidden compartment on its 2020 Domane range.

Specialized has had SWAT doors on their MTB line since 2016 with the SJ,and the road line since March with the new Diverge. It makes sense for it to be on more endurance/gravel bikes over a pure race bike. SWAT doors on a race bike add weight and complexity that isn’t needed on a bike that is going after specific targets or a specific market/consumer. There are certainly tons of other options to carry more gear. The road bandit from Specialized is quite handy as it sits under my saddle and is less conspicuous than a saddle bag.

For my money, the neatest storage is a tool keg in the second bottle holder on the seat tube. Looks good and even a small one easily holds a spare tube, CO2 inflator, levers, multi-tool, house/car keys, gel tube, etc..

10cm? The reach of normal set of bars is like 8cm, and hoods a few more, so these bars and hoods doubled that?

Awesome review! I have to say though when I see a bike like this I wonder why the manufacturer didn’t just go one small step further and put in mounts for fenders. It just seems like they are turning their backs on a potential market segment. It wouldn’t be much trouble, they wouldn’t need to change the basic bike they made at all, just have some way to add fenders. I’m not trying to single out this bike or this manufacturer, I see it from most manufacturers.