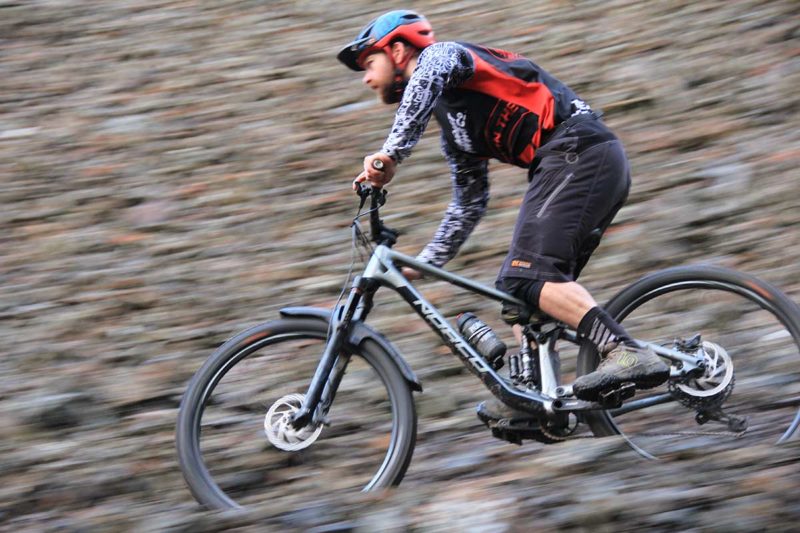 Our interest was piqued with the launch of the Norco Optic 2020, with its geometry and suspension kinematic overhaul, said to distill into one of the most capable short travel trail bikes on the market. Norco’s marketing chat aside, it was hard to argue with the show put on by Bryn Atkinson in the slow-mo filled shreddit, “Find Focus“. With the heavy damper tune on the DH-spec shock, servicing just 125mm of so-called well-managed rear wheel travel, generous reach and sector-leading geometry, the Norco Optic was immediately set to be one of the most interesting bikes of 2020. Hence, our eagerness to get one of these lean shred machines in for review. Read on to find out how we got on with the entry-level spec Norco Optic C3. 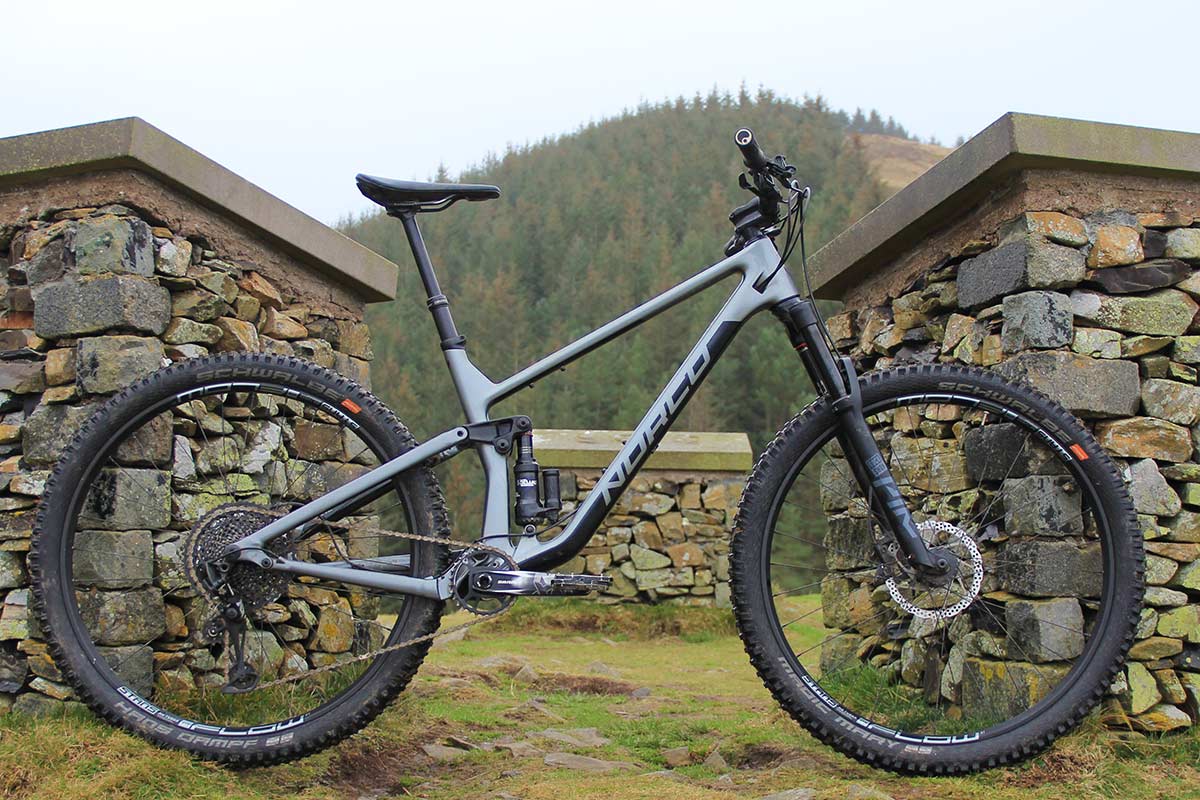 We tested the 2020 Norco Optic C3, with a carbon front triangle and aluminium rear end

Our tester opted for the Norco Optic C3 in size large. The 29er features 125mm of rear wheel travel, serviced by a RockShox Super Deluxe Ultimate DH shock with a heavy damper tune, paired with a 140mm travel RockShox Pike Select fork up front. Priced at £2,995, the C3 is speced with SRAM’s NX Eagle 11 speed drivetrain with a 30T chainring, which our tester found to be a very welcome addition on long hilly days in the saddle. 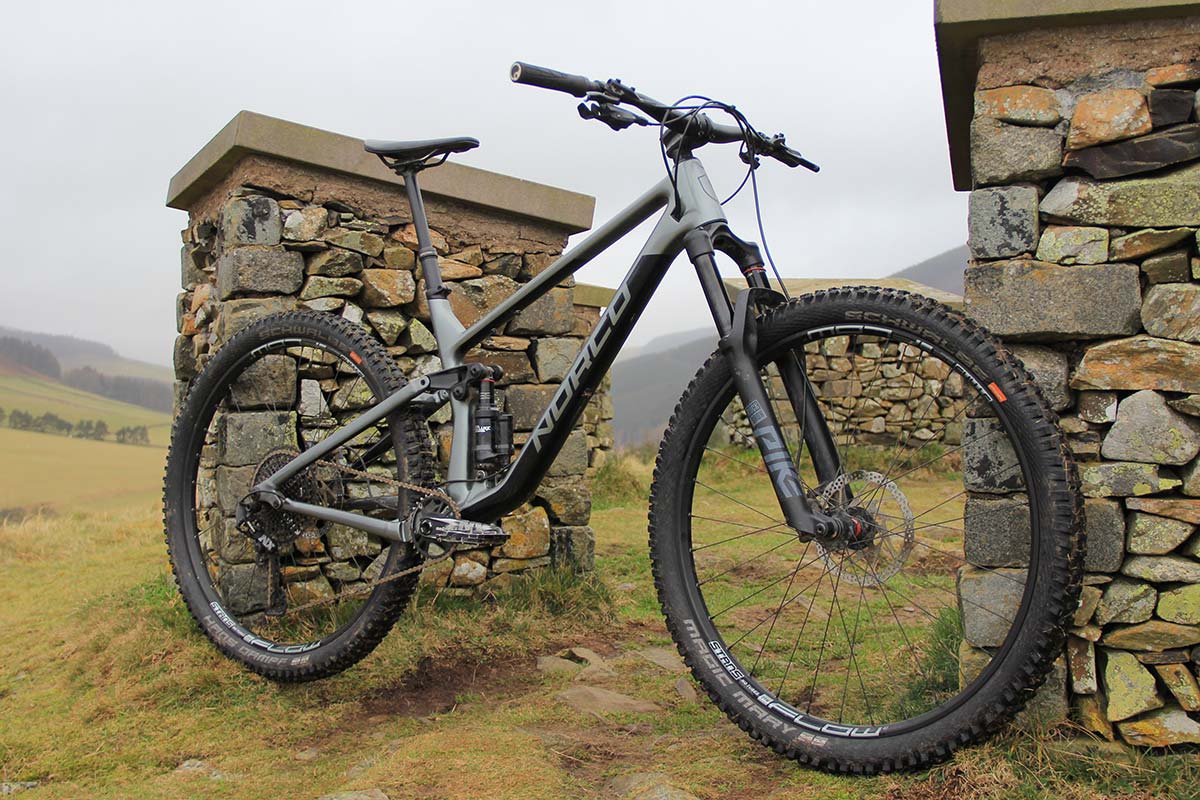 The head angle sits at a slack 65 degrees while the reach on the large stretches out to 480mm. The wheelbase measures in at 1235mm with 435mm chain stays, the length of which vary with frame size. 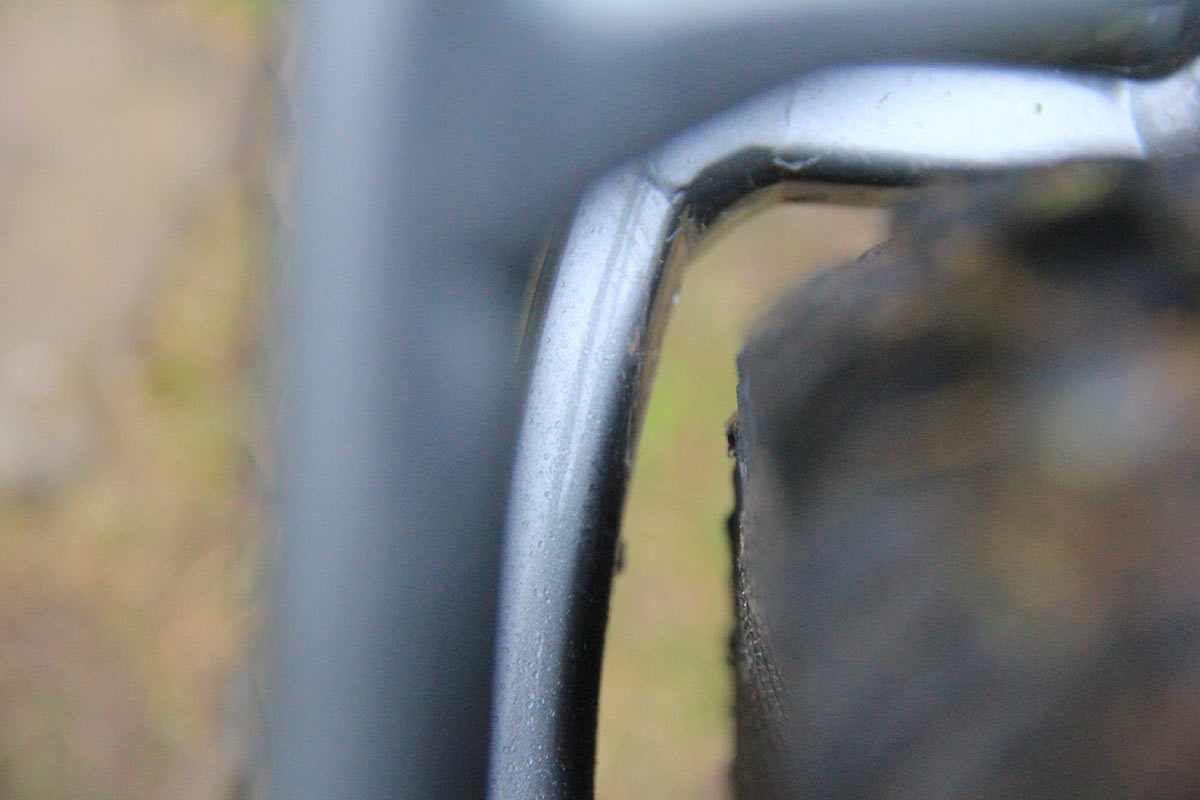 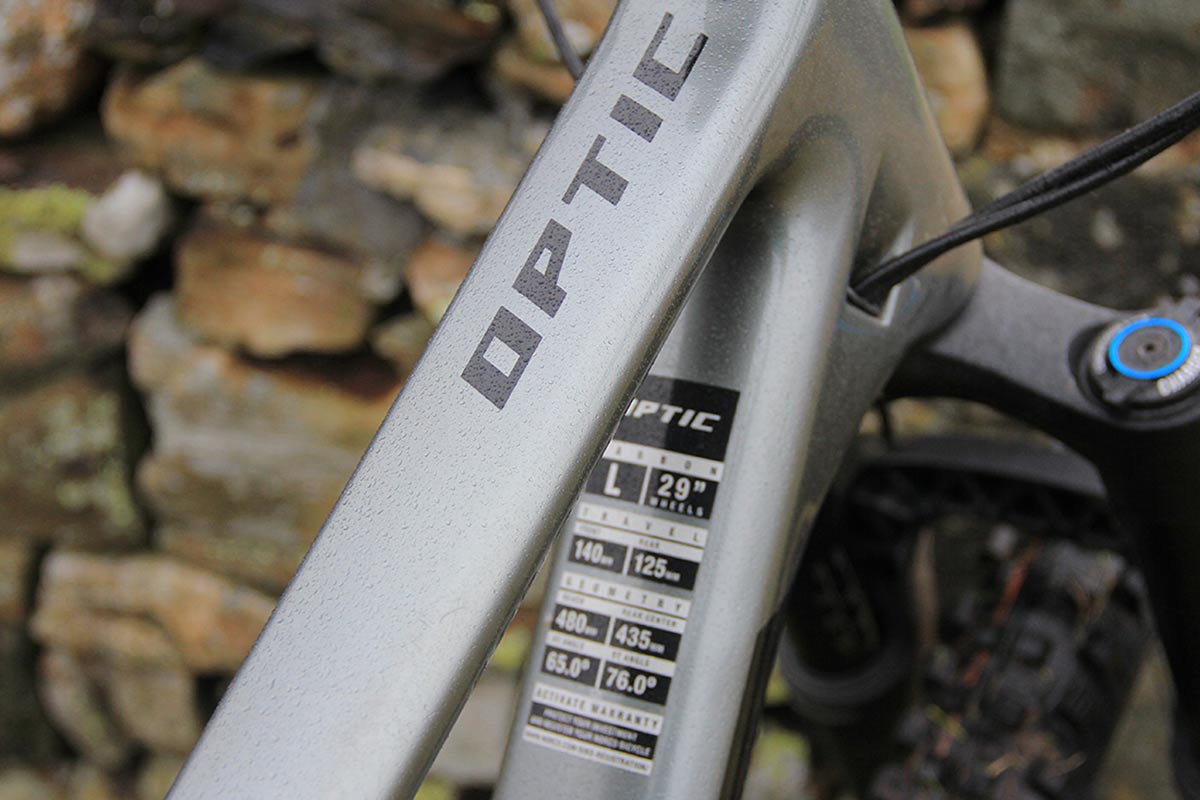 We really liked the addition of a geometry info sticker on the downtube, with so many riders asking about the bike’s specifics 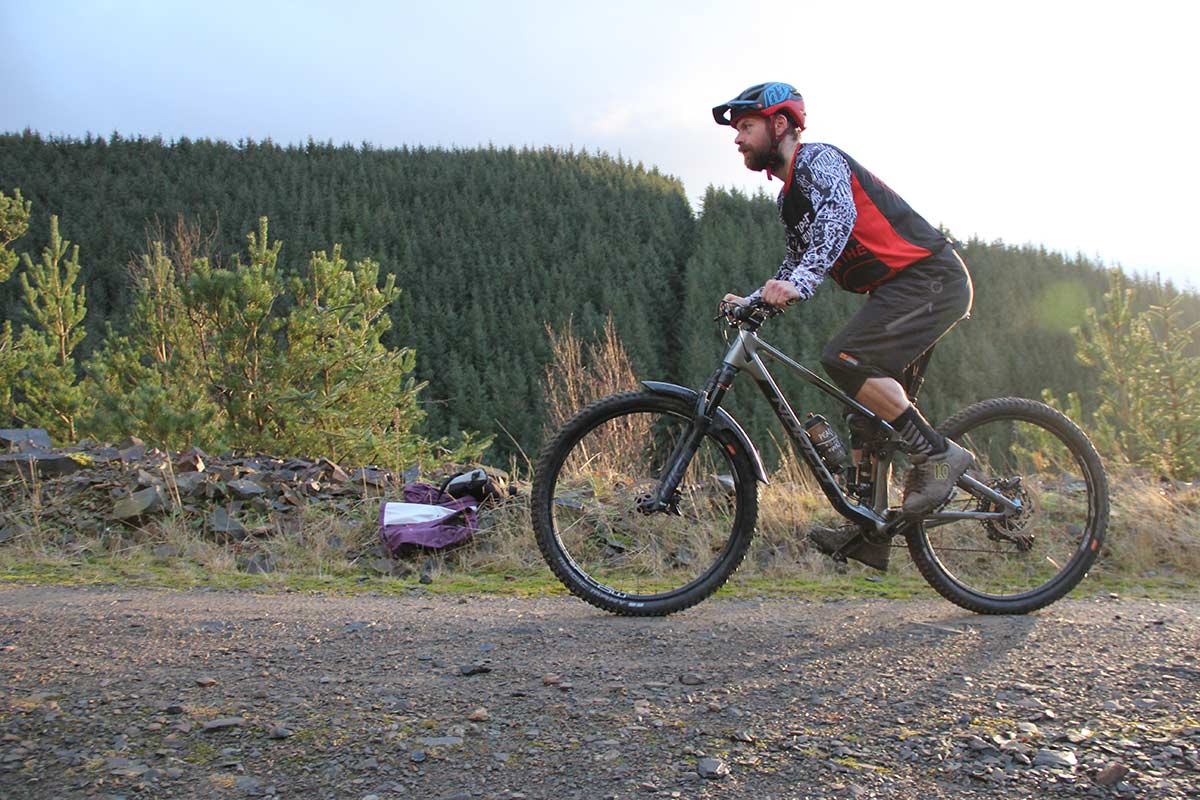 Rob Hinds stands at 5ft 11″, placing him comfortably on a large frame. I think most people who know Rob would 100% agree he is a very capable, aggressive rider, able to put any bike through a rigorous and arduous test. Rob took the Norco Optic onto some of Innerleithen’s most technically challenging and testing trails, some possibly outwith the prescribed intentions for the bike, and he also ventured North onto unknown terrain at Inverness. He also rode plenty of trail centre singletrack at Glentress, which is more the type of terrain the bike is aimed at.

Rob used the Ride Aligned platform to set up the bike’s suspension initially. Ride Aligned is Norco’s rider centred-system that aims to match each individual bike to the human who rides it, through suspension set-up and tyre pressure optimisation, creating a customized platform that is both stable and balanced. Rob thought this gave a good starting point but he did end up deviating from it, finding it too harsh initially. As he got more comfortable with the short travel bike, he reverted, adding more air pressure and more compression damping to get the ride feel he wanted.

How does the Optic climb? 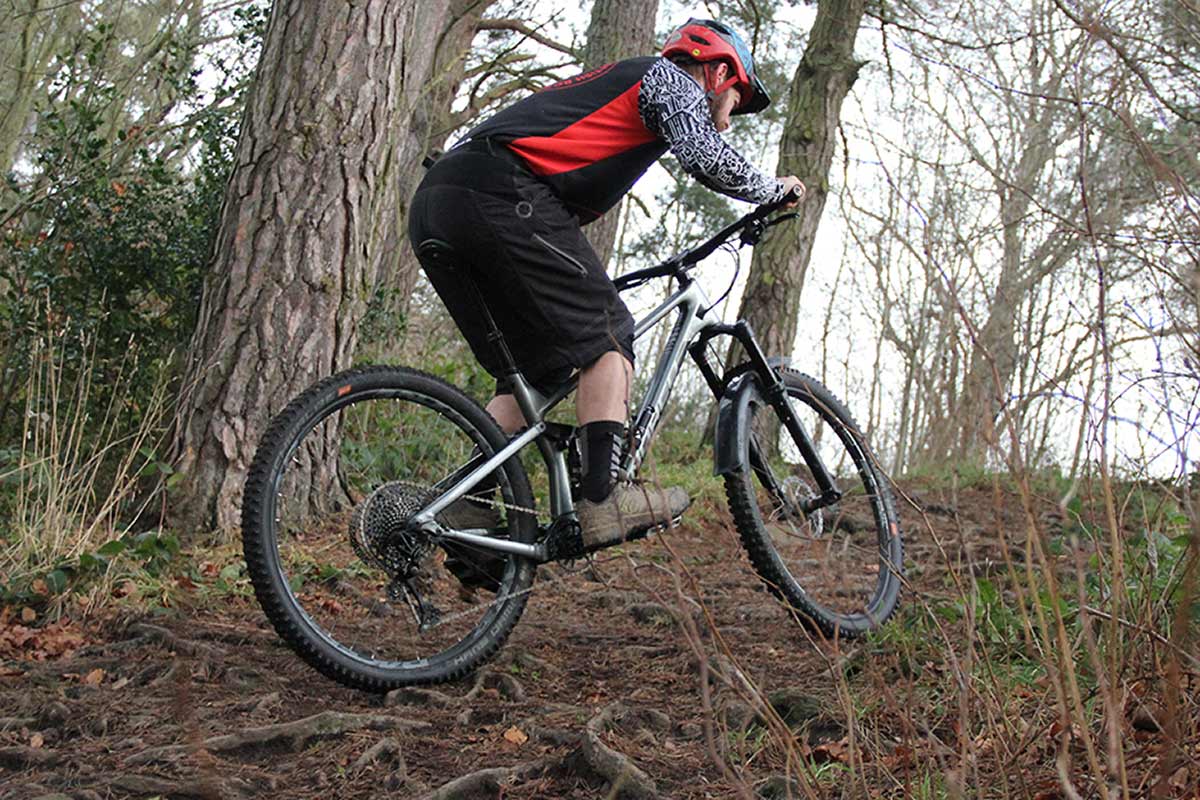 In short, like a stallion. On really steep sections, by shifting your body weight forward onto the button of the saddle, the rear tyre hooks up well and you can really winch your way up a climb. At no point did our tester feel as though he was about to loop out, credit to the  435mm rear-centre length (Size L), 76° seat angle, the grip of the Hans Dampf tyre, and the shock tune; this bike is really capable going up the steeps, finding plenty of traction pedalling at the shock’s sag point. Any concerns he may have initially had over the 1235mm wheelbase being unwieldy on a climb were not apparent. 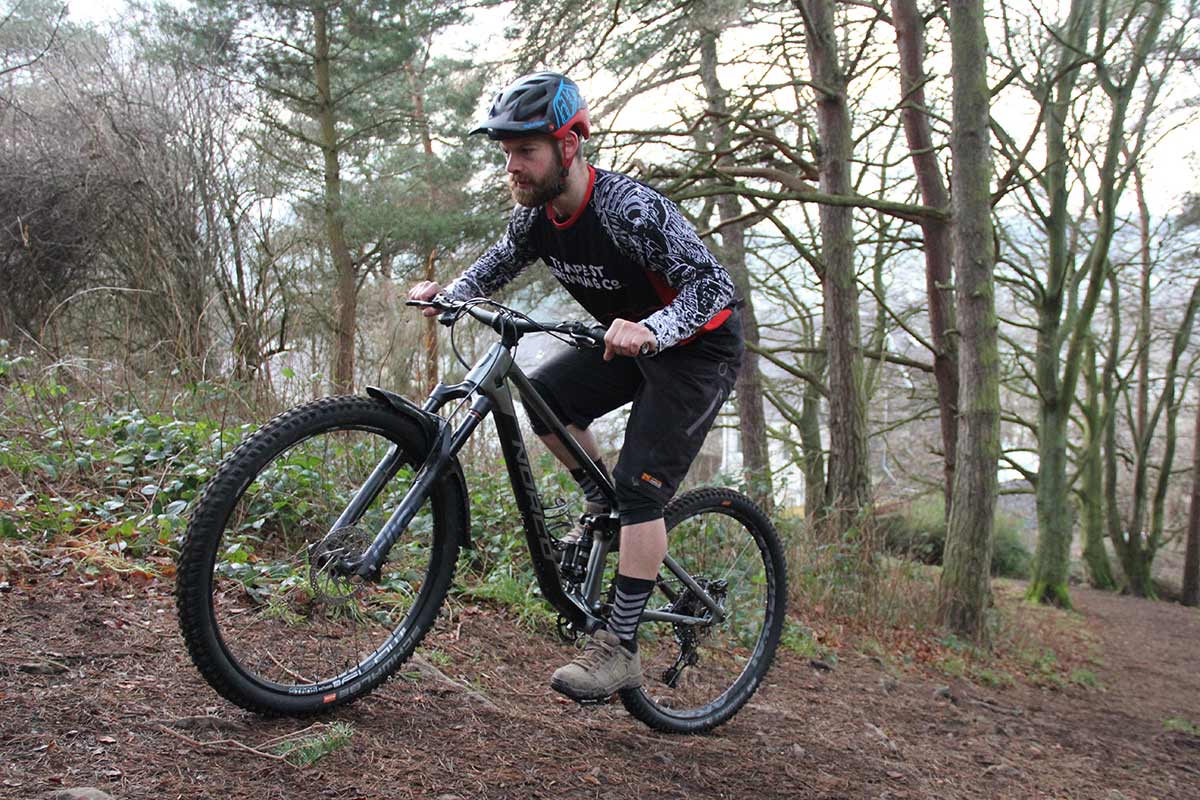 Rob would recommend the Optic as a good tool to for increasing your range in terms of distance, after spending long but comfortable days in the saddle exploring. The steep seat angle and supportive shock provide an efficient and supportive pedalling platform, with no pedal bob to speak of.

How does it descend? 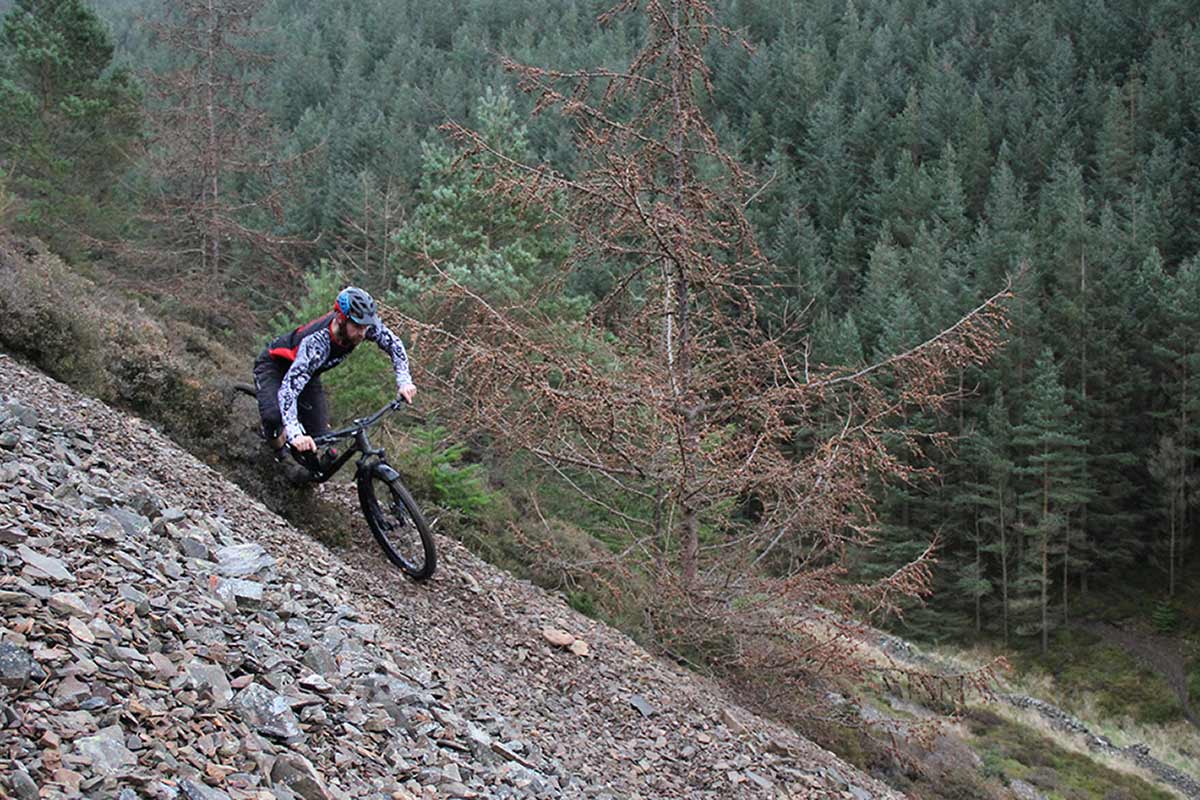 Briefly, the 2020 Norco Optic wants to go fast, but can be pretty hard to slow down once it gets going, perhaps warranting an upgrade in brake rotor size from 180mm to 200mm. The bottom bracket sits at a lower than average 337mm off the ground, allowing the bike to carve around corners very well. On a few occasions, while riding steeper turns, our tester caught the rear inside pedal off the ground and experienced a bit of heel dragging. He reasoned that the occasional pedal catch or heel drag may have been as a result of him going quicker than planned, thus leaning earlier in turns. 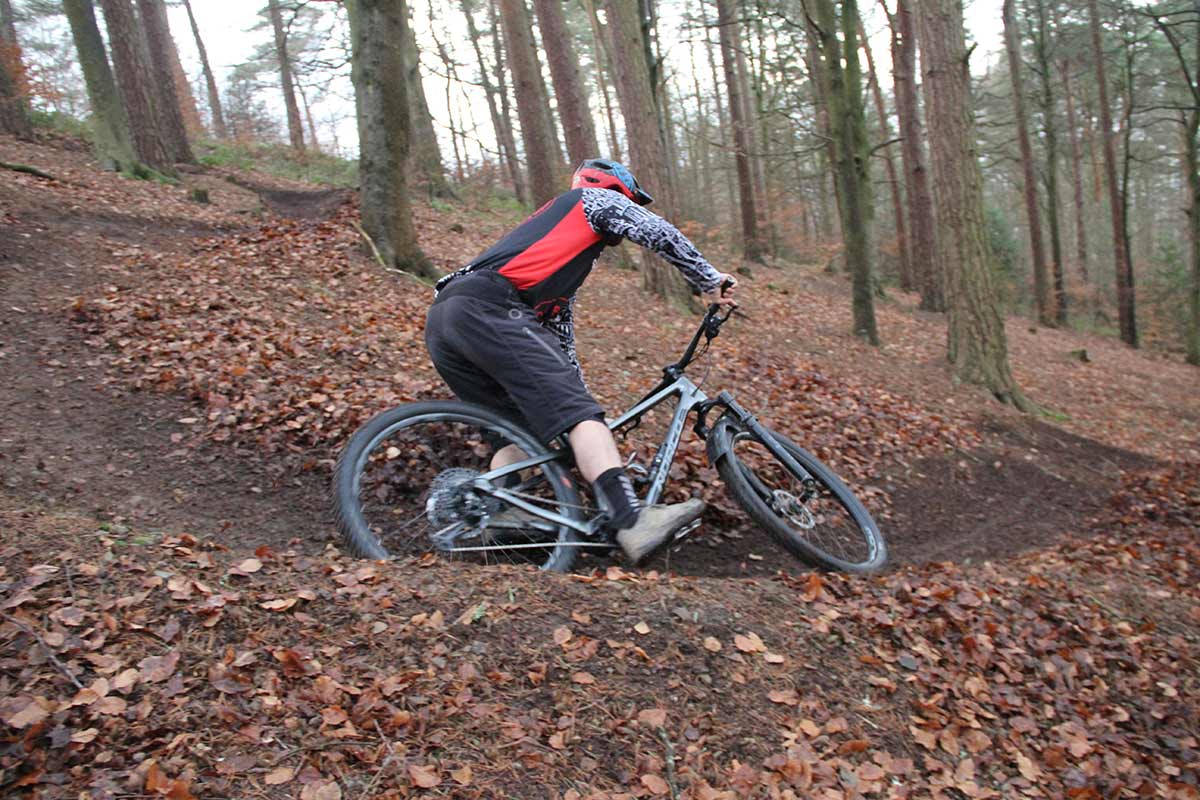 The shock was a standout feature of the bike, with no wallowing in the travel and always providing something to push off

Pumping the Norco Optic is well rewarded with momentum carried and speed increased, allowing the rider to push out of turns onto a high line in order to carve through the next one. 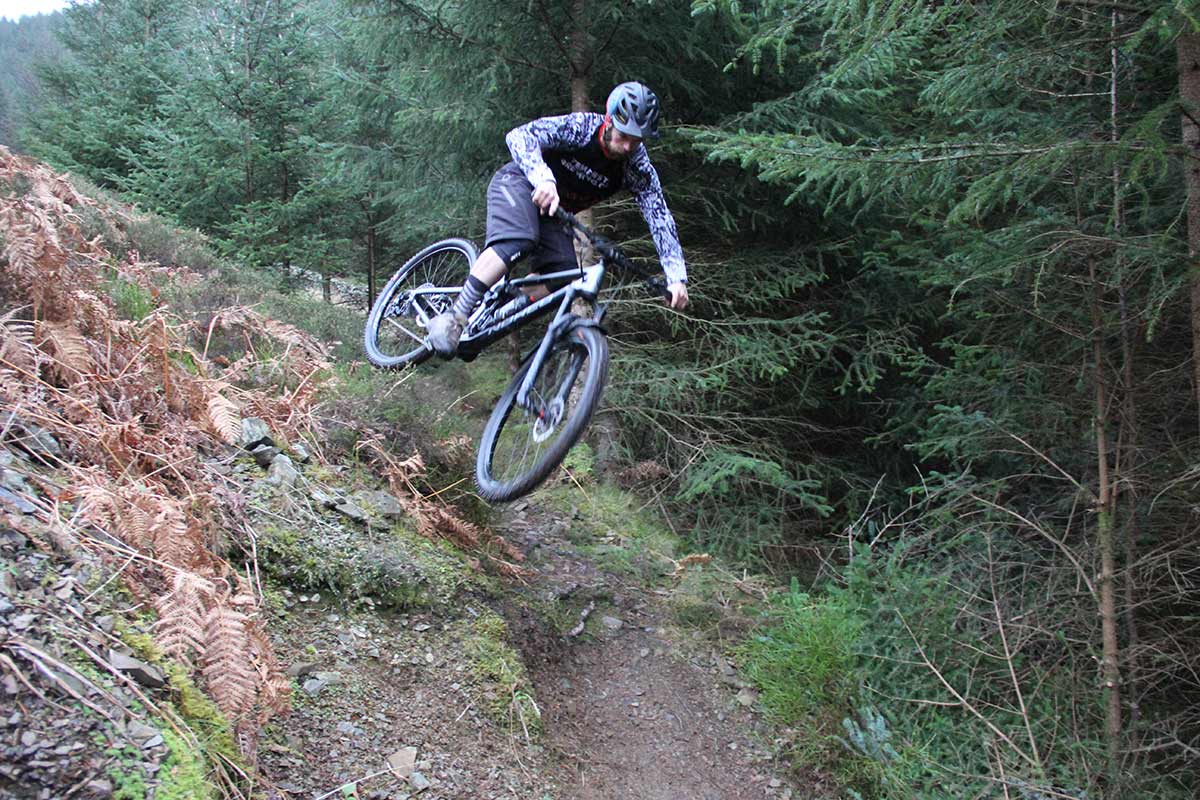 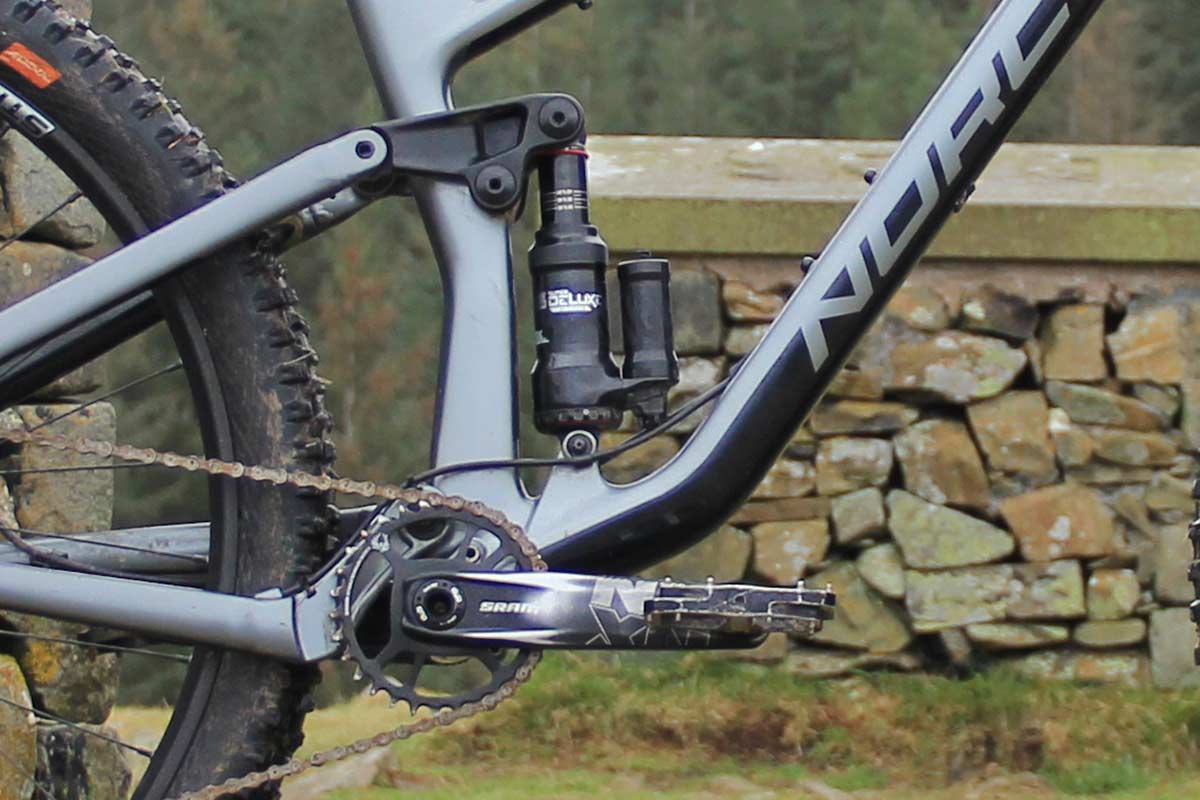 Our tester was satisfied with the overall maneuverability of the Optic. The 698mm standover height was plenty and the relatively longer reach and stem combo didn’t hinder handling on steep and tight technical trails. It was no drama to nose pivot if the trail demanded it. Rarely did Rob’s derriere buzz off the back tyre on the ultra steep, credit to the bike’s length. 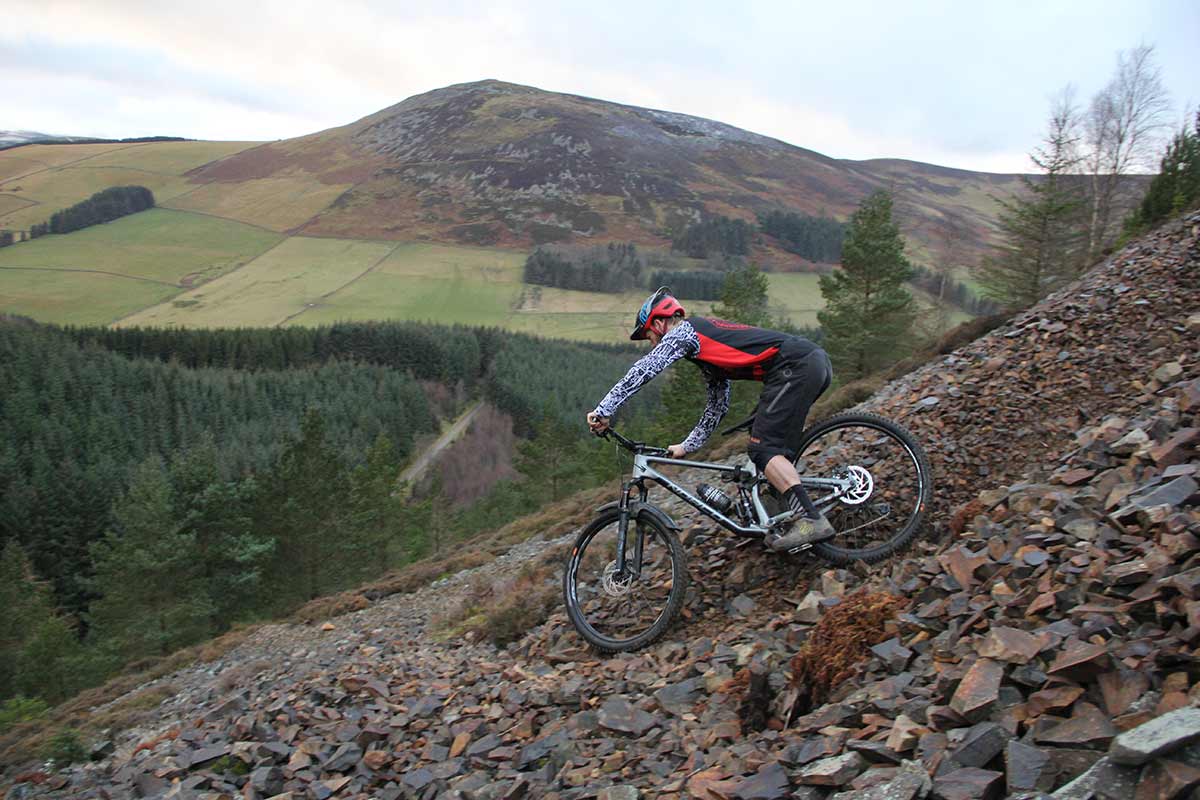 The Norco Optic displayed decent stability at speed over rough terrain, but the RockShox Pike Select fork and snakeskin Hans Dampf on the rear wheel didn’t really feel designed for that. Our tester felt the fork itself was was adequate but not particularly good; it wasn’t able to hold the rider up in the travel under braking. A more supportive fork damper would have allowed for more control. 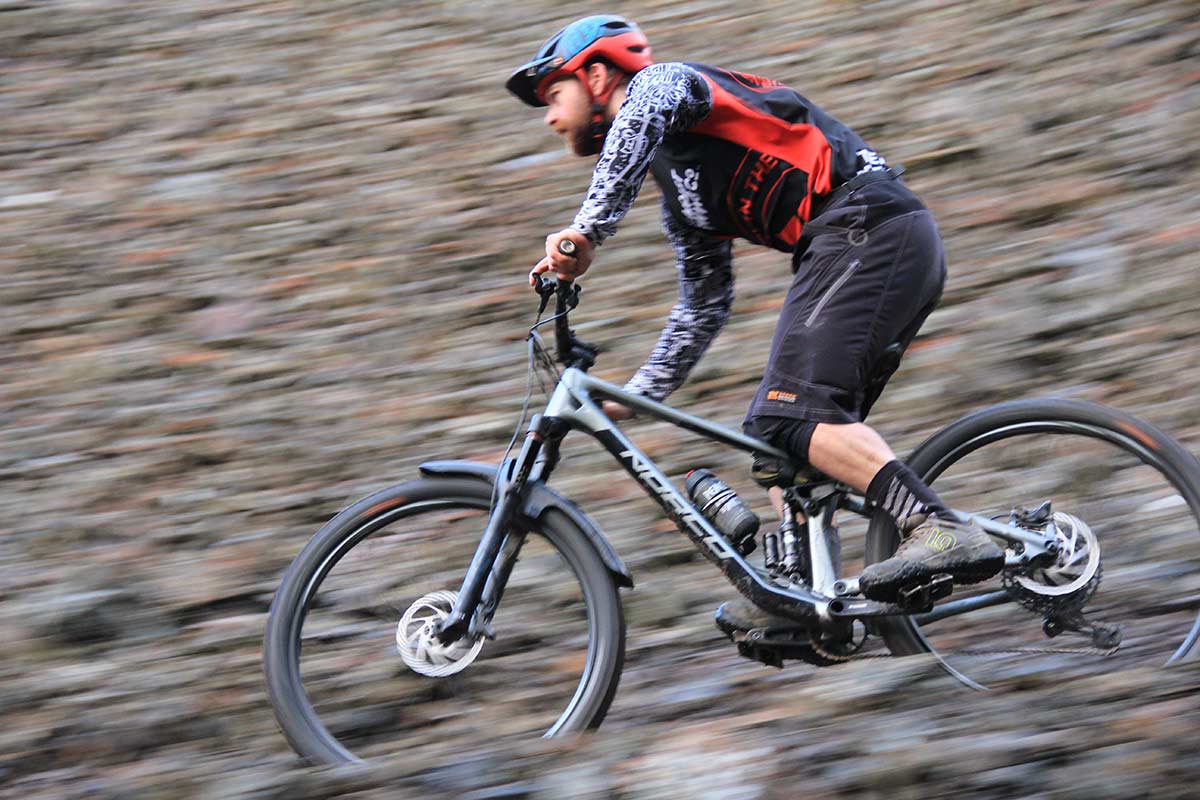 Some notes on the Norco Optic C3 spec…

In addition to upgrading the brakes to 200mm rotors, Rob would also have upgraded the RockShox Pike Select fork, to something with a more supportive damper. He would also have upgraded the rear wheel. The Stans Flow S1 rims laced up to the Novatec hub were a fairly flexi combo, with the rear wheel flexing enough to cause tyre rub on the inside of the seat stays. The hub also suffered from some unexplained issues in which the freehub stuck consistently, despite the presence of excessive water. It’s likely that the hub contains a slip surface that is vulnerable to grit or water and isn’t adequately sealed.

Standout highlights of the C3 build were the tyre choice, brakes and drivetrain. The 4-pot Shimano BR-M420 brakes were flawless. No wandering bite point was experienced, and the longer lever allowed for good modulation. That said, a 200mm rotor would have reduced the arm pump Rob experienced on fast downhill tracks.

Our tester was also very impressed with the SRAM NX Eagle drivetrain, rarely dropping a chain on some seriously rough descents; an impressive feat given the small amount of rear wheel travel. As for the NX shifter, a small issue was encountered wherein, once the drivetrain was sat in the easiest gear, the cable wouldn’t shift the chain back down the cassette. Upon investigation, it became apparent that on shifting up into that easiest gear, the tension on the cable inside the shifter was sufficient to make it jump out of its guide/shelf in which it is designed to sit, resulting in it jamming. 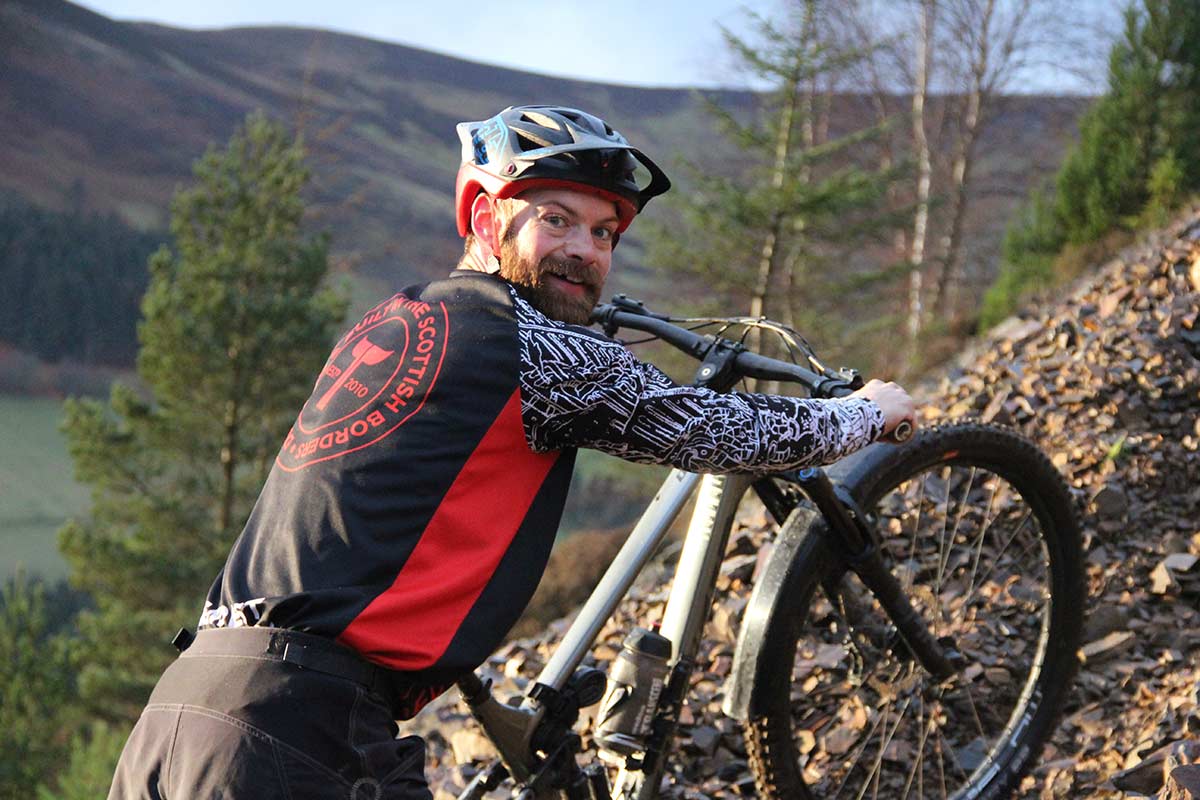 Rob pushing back up the infamous ‘Avalanche’ trail at the Golfie, Innerleithen.

“It makes you want to go up and do another lap, this time faster” – Rob Hinds.

On the whole, the 2020 Norco Optic offers an inspiring riding position, egging the rider on to go fast. Above all else, our tester felt the 2020 Norco Optic was an intuitive bike to ride, describing it fondly as “like riding with a mate who eggs you on a bit”. He was clear that the Optic does not feel like a scaled down enduro bike, nor does it feel like a scaled up XC bike, describing it as more of an aggressive trail bike, sitting in a class of its own. 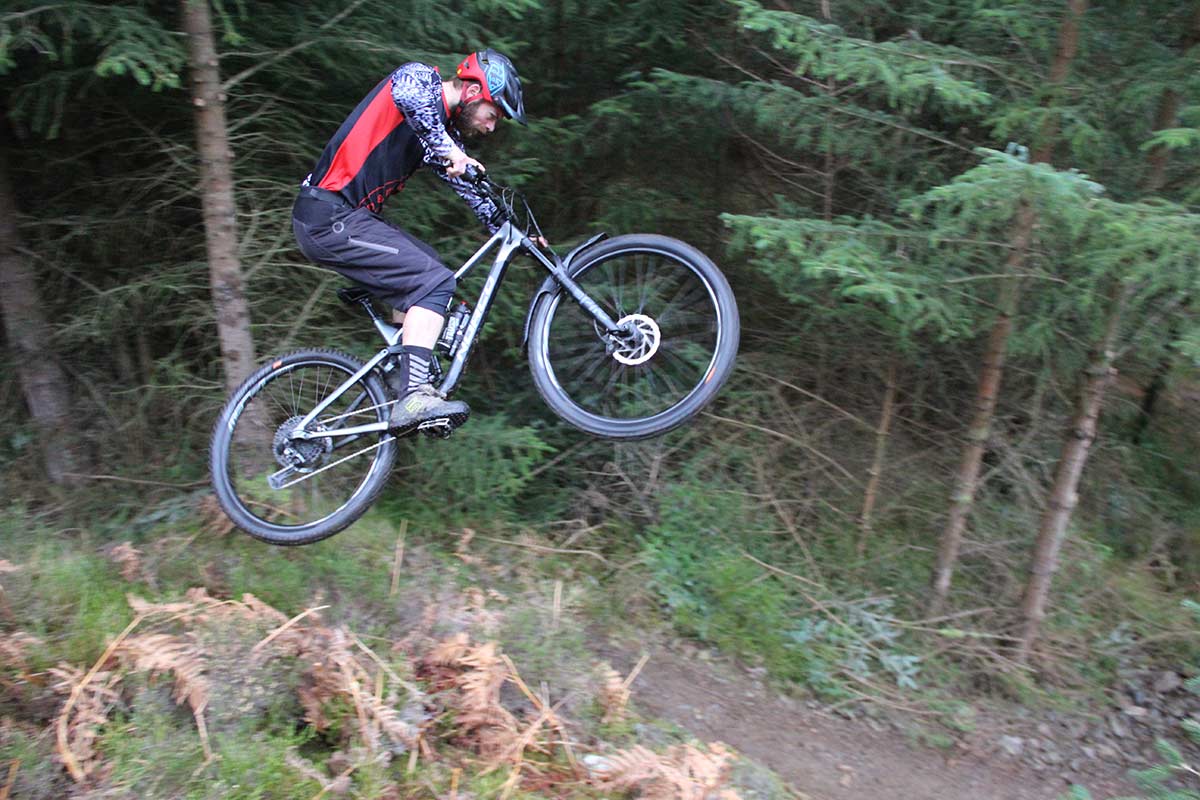 Rob felt the Norco Optic 2020 would be a bike that would work well for a wide range of people, and a would be a trustworthy steed to head out on unknown trails with. To do a UK trail centre tour on the Optic would be to downplay its potential; regardless, it is the bike that Rob would choose.

Hey, just imagine how good it would climb with a climb switch on the shock!

Rob would also have upgraded the RockShox Pike Select fork, to something with a more supportive damper – which one for example?

Wonder how it compares to a Canyon Neuron CF and YT Izzo?