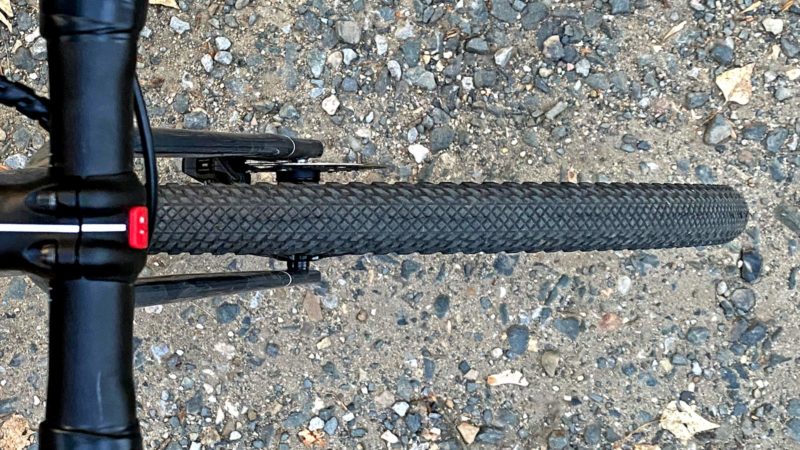 Last summer, Czech tire maker Tufo added the first truly all-new tread designs we’ve seen from them in several years with these Gravel Thundero and Gravel Speedero tubeless gravel bike clinchers. The first real gravel tires from Tufo both feature tightly-packed tread designs that appear to prioritize hard surface speed over technical off-road traction. But with light weight, supple construction, and affordability claims, we were definitely interested in trying them out ourselves… 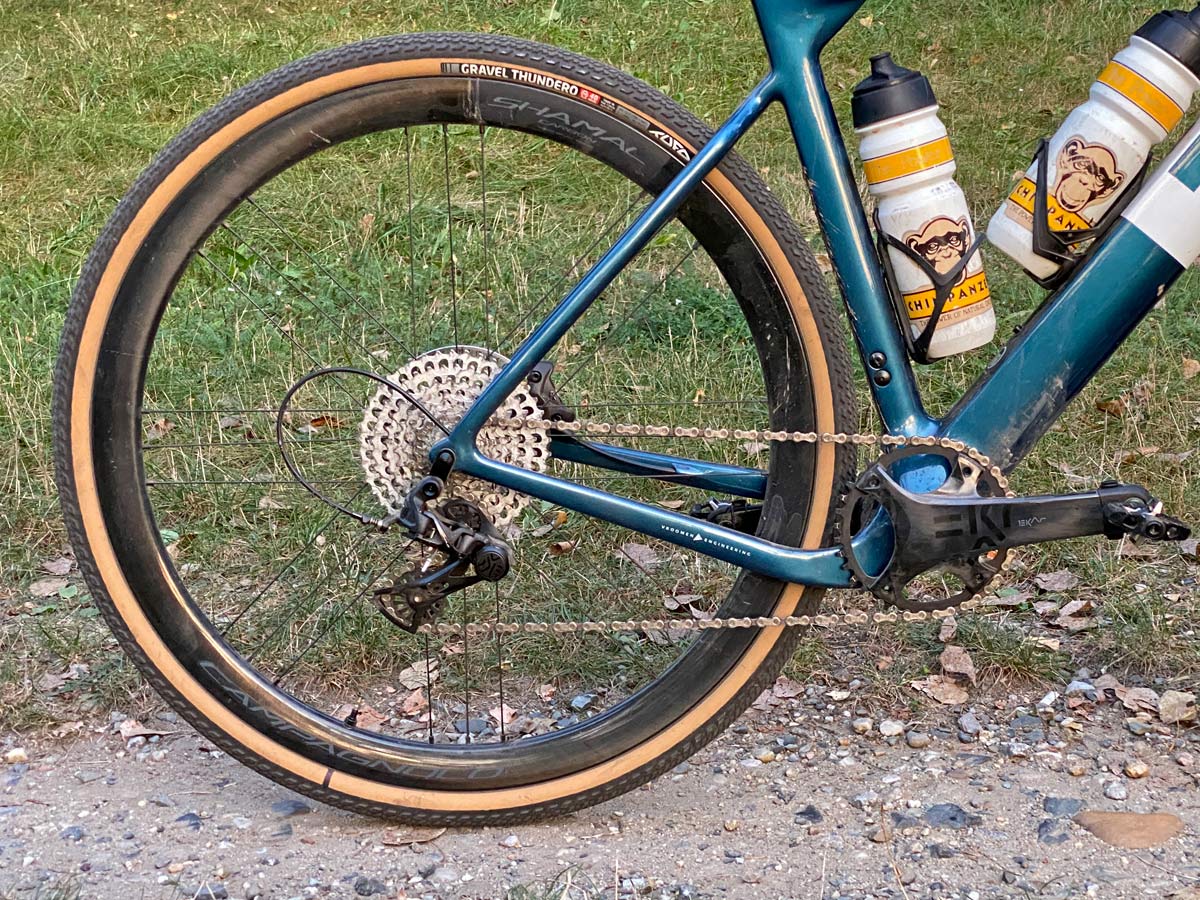 Having specialized in cyclocross tires and uniquely durable tubeless tubulars on & off-road for 25 years, Tufo have expanded their capabilities greatly since first adding clinchers, then tubeless clinchers, then more Europe-based contract manufacturing for other brands in recent years. I’ve ridden generations of tough CX & maybe too fragile road Tufos in the past, so after looking at the specs I was hoping these new tires might hit the ‘just right‘ sweet spot in between.

And that they did… earning an Editor’s Choice Award this winter as the best all-new gravel tire I rode in 2020. 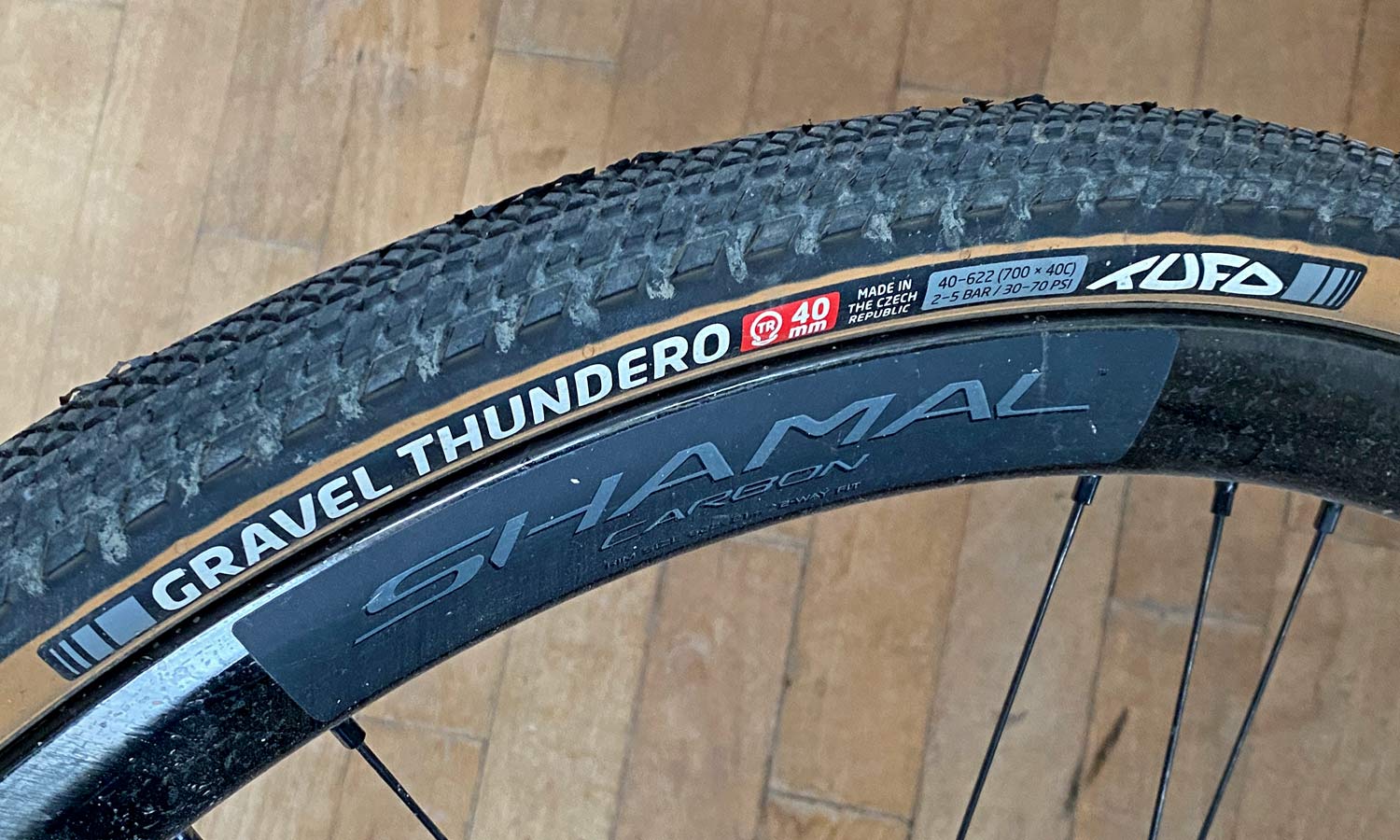 The move into gravel tires is of course a logical one. First, there’s that on-going boom of anything with the word ‘gravel’ written on the side of it. 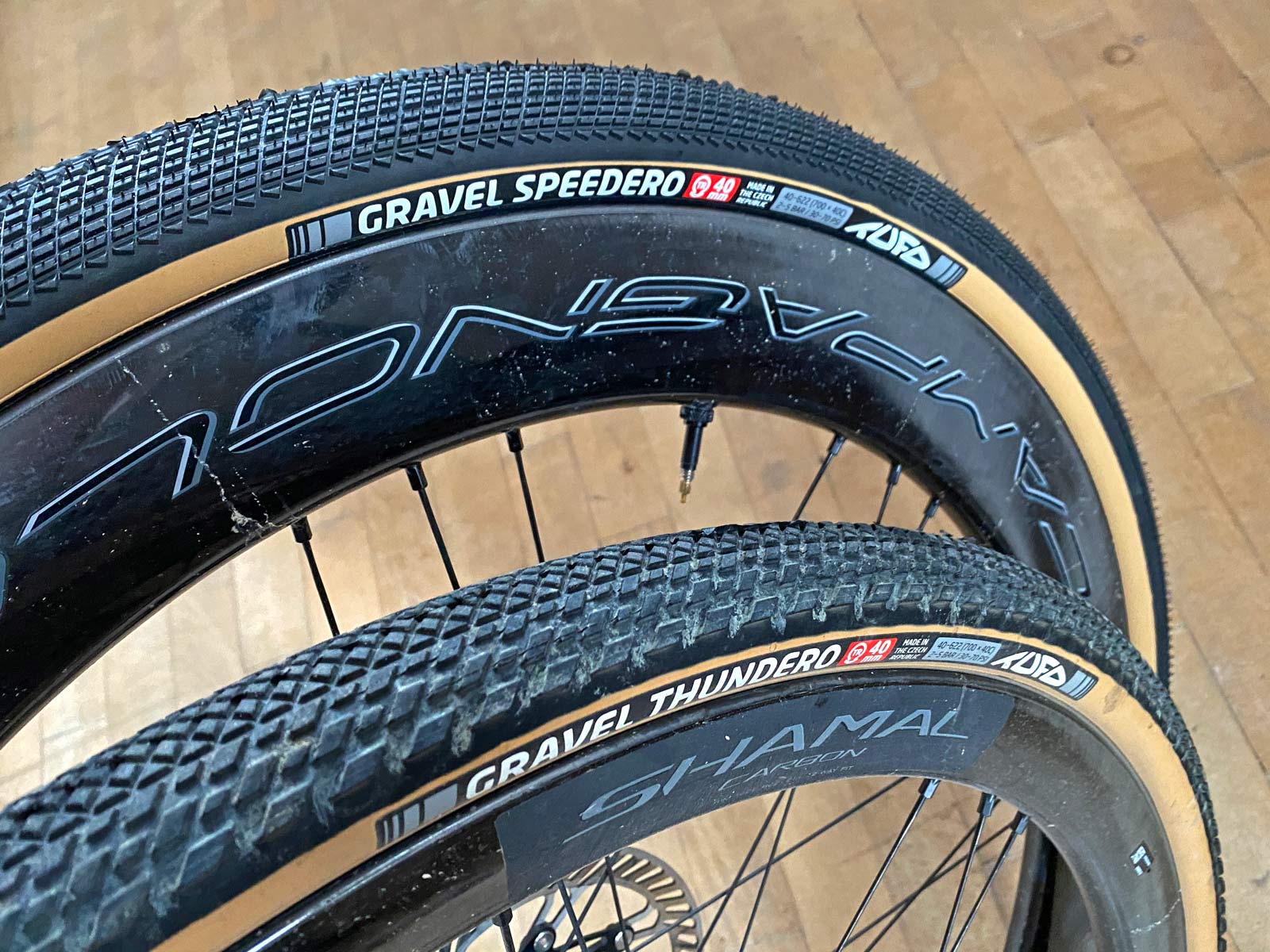 With that in mind, I’ve spent the most time riding the Thundero over mixed-terrain with both hard & loose surfaces. I’ve put much fewer kilometers on the Speedero, limited more to rough asphalt & a bit of hardpack gravel roads, which seemed more appropriate. 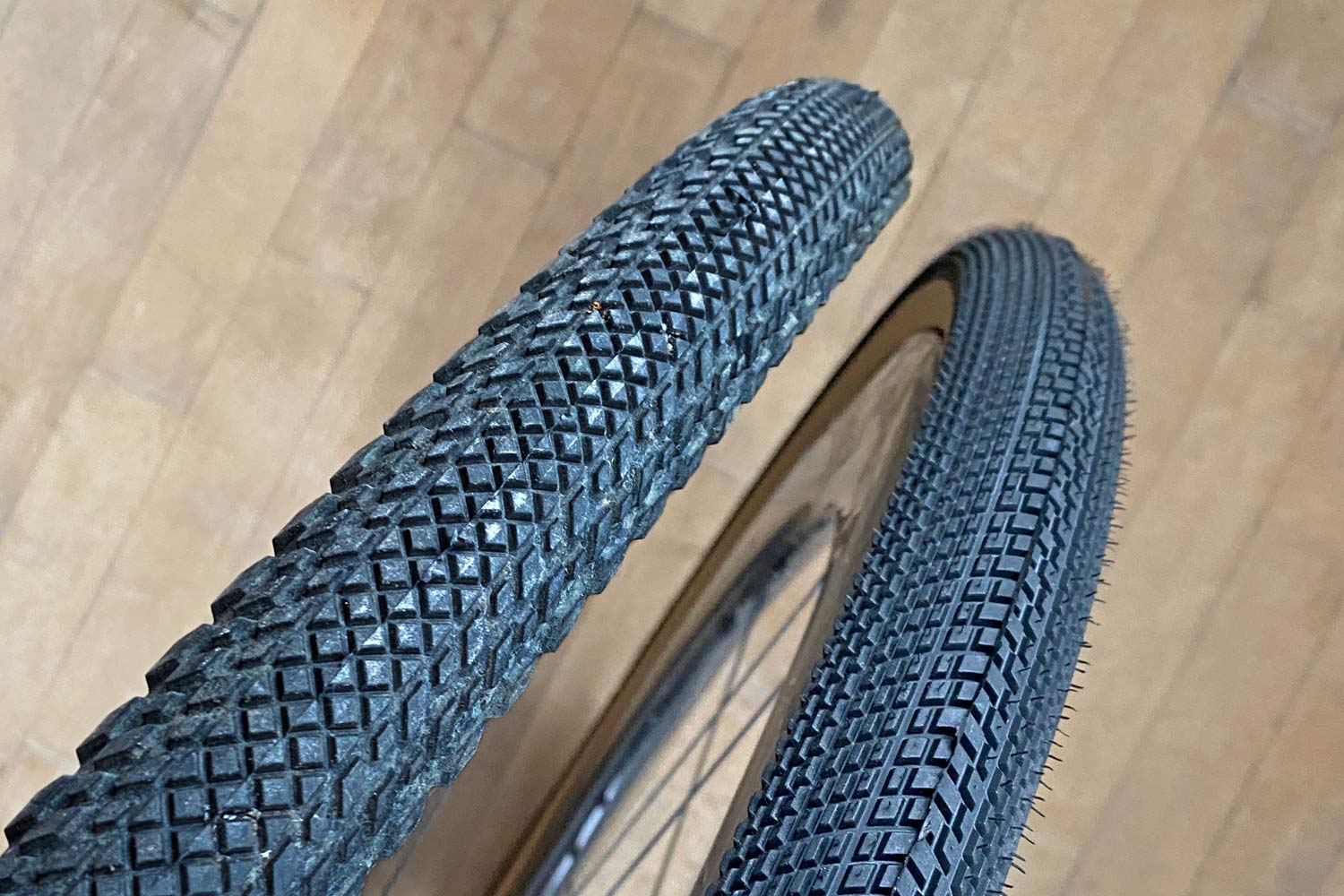 Tufo says high mileage & long life were key to getting the value they were targeting. While the tires use sufficiently soft & grippy compound, they feature a lot of rubber surface area, so there’s plenty to wear for a long time. After months frequently riding the Thundero, I can see it lasting at least a few hard seasons.

Neither tire has any big gaps between tread blocks, which limits their grip in really soft or loose conditions, but does ensure reliable & predictable grip as you lean them over into a turn.

Both Gravel Thundero & Speedero feature the same vulcanized nylon construction which Tufo claims is 210tpi in the sidewalls and 375tpi under the tread. That doesn’t exactly translate to the same high-tpi flexibility of handmade open tubular – Tufo seems to add up the thread count of each additional layer. But the tires are supple and relatively lightweight, with flexible sidewall protection and an anti-puncture layer under the tread. 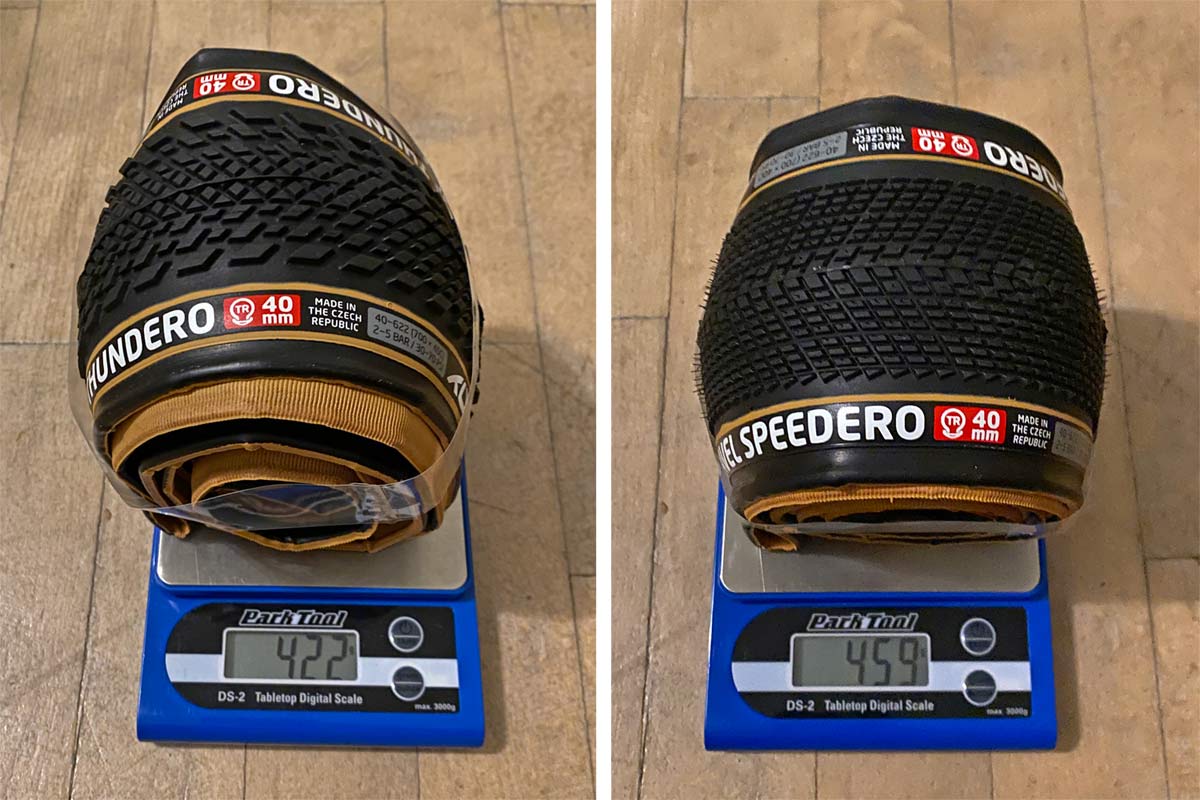 Both Gravel Thundero & Speedero are available only in 700c x 40mm, in either natural tanwall or all-black versions for the same 40€ retail price (~$48). Many gravelers would probably love to see these in a 650b option, or a wider 700c, but for now 40mm is Tufo’s targeted sweet spot.

Tufo claims a weight of 440g for either tire. The real weights of our test Thunderos were a bit lighter at 422g & 439g. I would guess due to the more continuous rubber tread, our Speederos weighed in a bit heavier, at 459g & 462g. 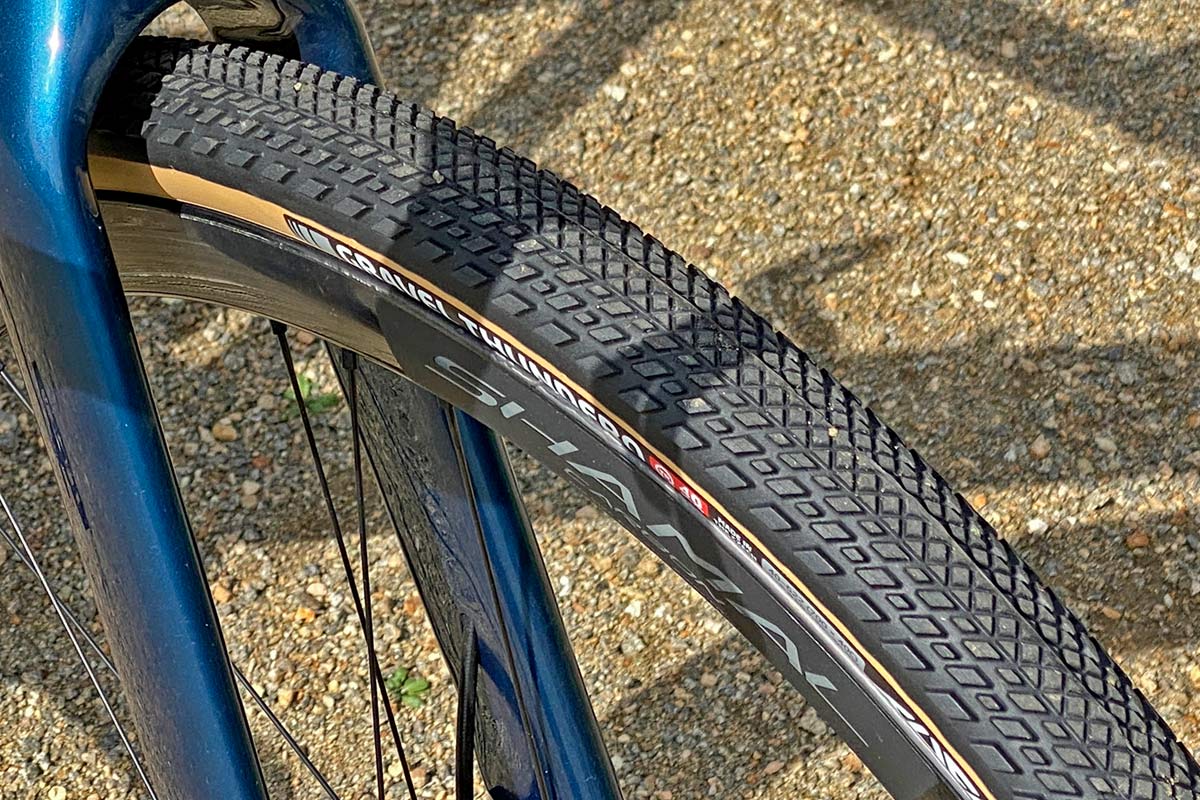 Since both tread designs seem relatively tame in the current adventure-riding gravel climate, I opted to spend most time on the Gravel Thundero. The diamond center blocks offered a fast-rolling feel on pavement & hardpack, and more open shoulders let me dig for grip in sandy terrain, loose fine gravel, and on wetter, muddier rides.

To be honest, I expected them to slide a lot in loose terrain. I’d figured since they transitioned smoothly from centerline to shoulder blocks without gaps, at least they should slide predictably. I was however pleasantly surprised at the cornering grip of the soft rubber in almost all conditions, better than expected. 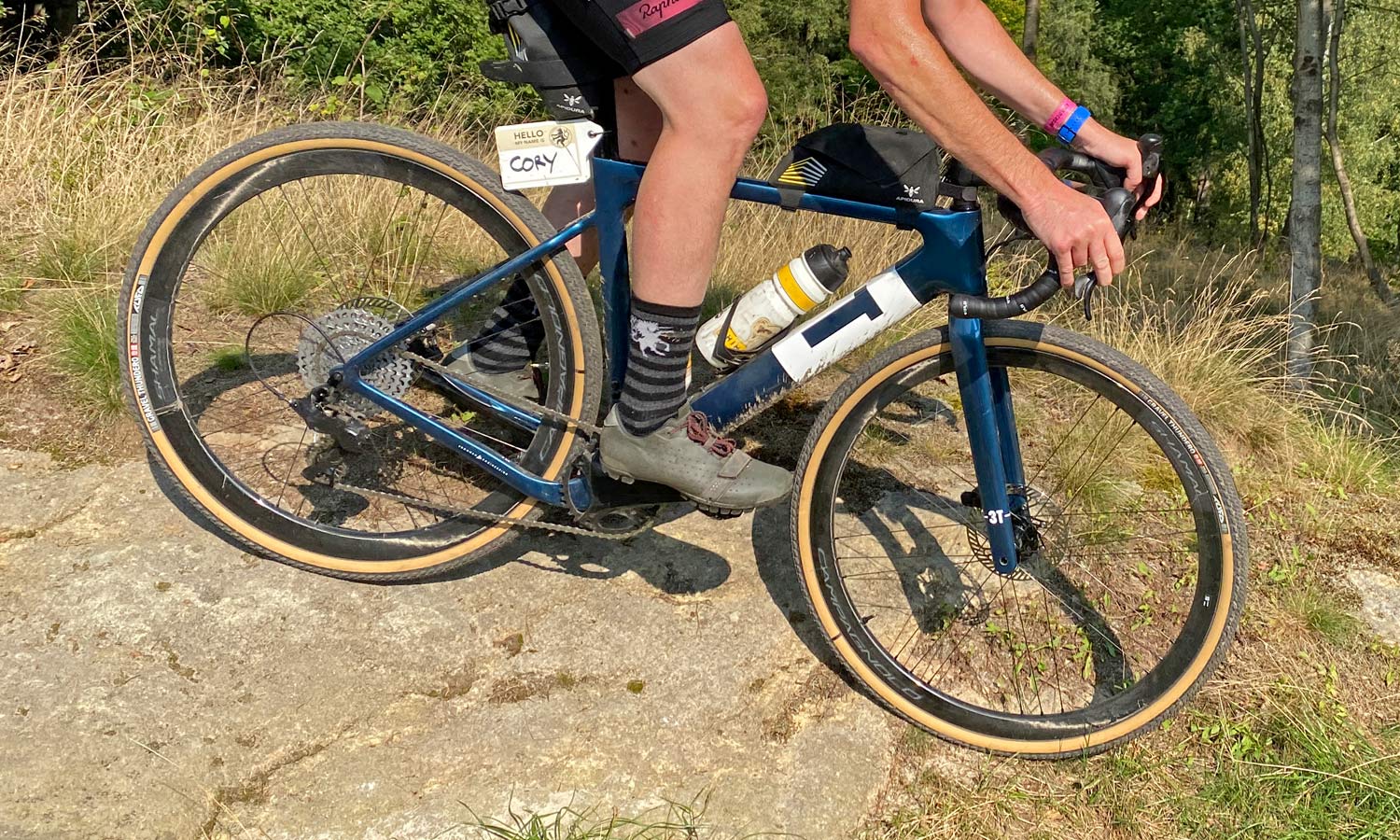 The tires simply feel like a happy medium of riding both on and off roads – while sticking mostly to hard surfaces. Isn’t that what gravel bikes are about?

The Thundero is surely the more versatile of the two, and plenty capable for some riding beyond the edge of gravel roads. But riders who expect to stay more on hard surfaces would appreciate the slightly faster feel of the Speedero, I would probably just keep those out of wet grass or off muddy trails for the most part.

Both tires set up easily, snapping into place & sealed with ease on Campagnolo & Hunt rims. I even rode the Thunderos a few days without any sealant inside just out of curiosity, before chickening out and adding some latex to ward off flats & evil spirits. 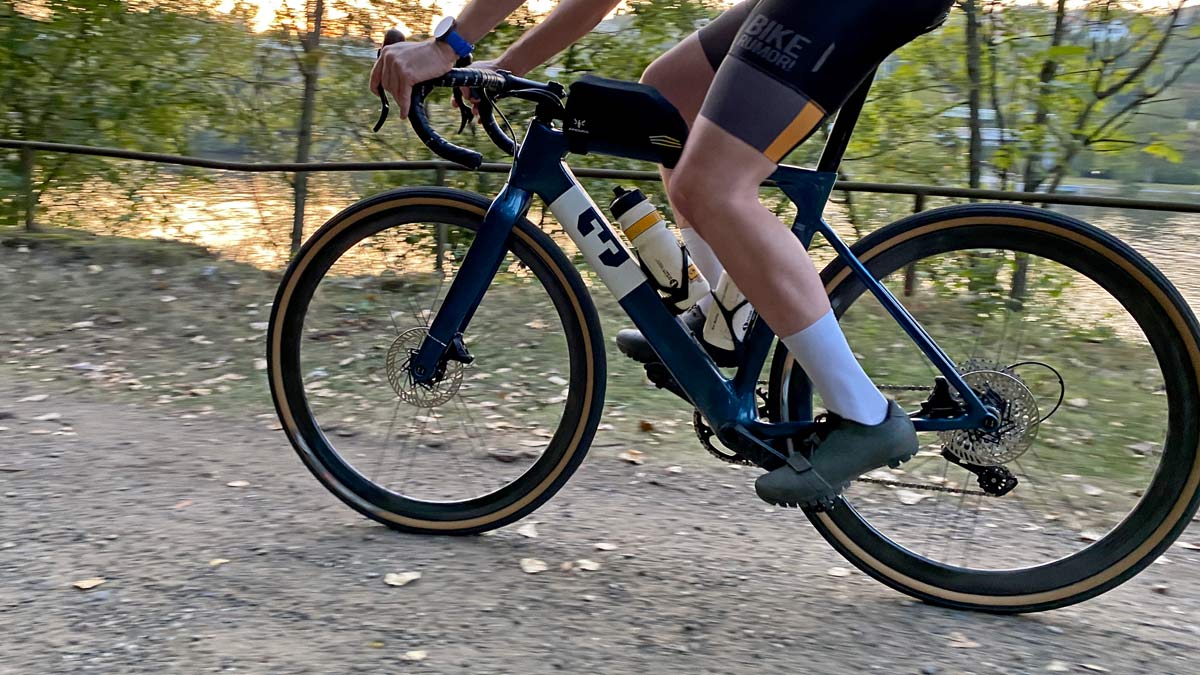 At just 40€ a tire, Tufo’s Gravel tires definitely feels like a solid value. A 40mm wide tire isn’t going to offer the volume & comfort for heading deeply off-road or onto big loaded bikepacking adventures. If that’s what you are looking for, probably best to go find the biggest mountain bike tire that will fit in your gravel bike.

But if you are just looking for a well-made (in the EU) grippy all-rounder gravel tire that won’t break the bank, and 40mm sounds like a good fit, it’s hard to argue with either Tufo’s tubeless Gravel Thundero or Gravel Speedero tires.

As someone who has glued on more CX tubulars than i’d care to admit, TUFO TIRES ROCK! I’d be keen to try these out.

Hi.
What is hight of this tyre? I mean when you mesure it from edge of the rim to top of the tyre.