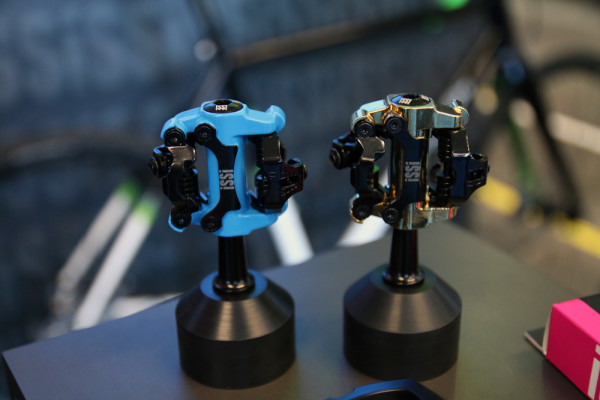 First introduced at Frostbike 2014, iSSi was back at Frostbike 2015 with a reworked line up offering better performance across the board. For the first go around, iSSi pedals would work with SPD cleats, but they weren’t a perfect match. Good news for anyone with multiple bikes that already have Shimano SPD pedals, the new iSSi pedals are all SPD compatible offering a much better feel when used with SPD cleats. The improvements don’t just apply to SPD cleats however, as the guts of the pedal have been redesigned to offer better function and feel with the included cleats from iSSi. 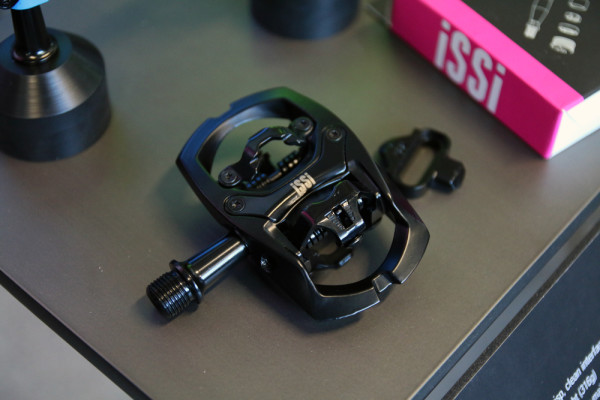 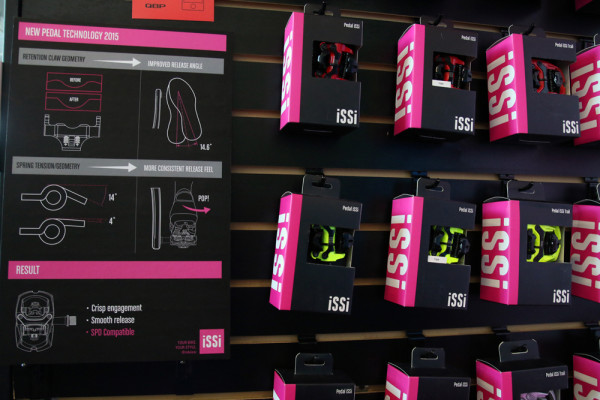 Applicable to both the Pedal iSSi II and Pedal iSSi Trail, moving forward iSSi pedals have a few new features that result in the mentioned improvements. In order to offer a better release angle of 14.6º, the retention claw is fitted with new geometry that is more squared at the edges. This geometry when paired with new spring tension geometry also adds to a better release feel for a more positive pop when unclipping. Together, the pedals offer snappier engagement and smoother release, all while allowing you to swap between iSSi and SPD cleats. Other improvements include increased durability through heat treating, and better vertical force cleat retention. 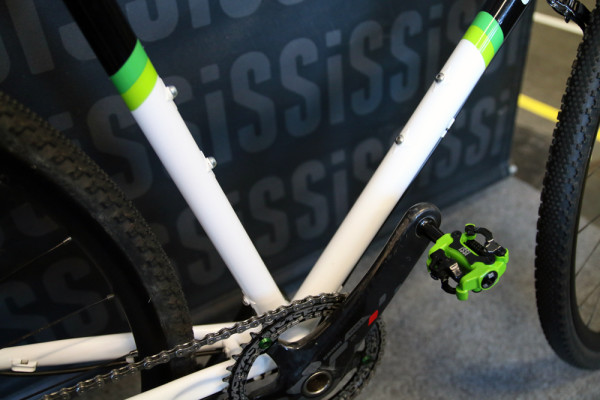 are they still offering these in the longer spindle lengths? Necessary for most in the winter months with the bigger insulated shoes.

@wako29, they have a separate, longer spindle kit available.

@wako29 – I see them at Universal Cycles online catalog, but they are listed as “out of stock”. As an SPD fan that is extremely “duck footed” an extra 6mm of spindle-length sounds awesome.

That was my first reaction Jcos. What the heck is is ISIS making pedals for?

Considering how jacked up the Shimano distribution line has gotten, this is a VERY welcomed sight for the IBD. Going to order a set to try them out before bringing them into the shop, but very excited about these buddies.

@bmw i have sold a few of these in my shop. they look solid, only had one customer complain about them being hard to get out of, but im not sure it was a legit complaint. other customers like them just fine, and especially like the color options.

For the price one can get brand new Shimano pedals all day long on EBay, no pukie colors, no suspect bearings. SPD campatability? RIght, may as well buy XT pedals !

Roy, some people do like to support their local shop, and economy. But as long as you save a few dollars and another shop goes out of business, all is right with the world.

I bought a pair in red to match my swiss cross. They seem to have held up well after a season, but my SPD cleats constantly got hung up on them while trying to clip out. Hopefully they fixed the problem for good.

They’re just wellgo’s anyway. You can buy the same pedals off ebay with the actual manufacturer name on them right now. Also as someone who runs Bebops still on some bikes, more release angle isn’t necessarily a good thing when you need to drop a foot when you catch a soft edge of a snow trail fat biking.

Look just like my Wellgo W01 which I really like and are cheap. I’m sure these are much more expensive.

Let’s see, they cost more, weigh more, perform almost as well as SPD’s and have no track record for durability. But, they come in cool colors. Sign me up.

Well, my Shimano M540’s are probably going to last me another 7 years, soo….no thanks.

Uh Mike….. there are actual people selling stuff on EBay.. they make money just like a local dealer, they pay their bills, buy food, raise kids, go for a ride even. but it ain’t like there is some vending machine called EBay and Amazon, there are people making a living just like the local, you just don’t get to pet their dog and ask which way a pedal threads into the crank arm, we have YouTube for that.

These pedals have a great track record. Wellgo is a staple in the industry. Just like all your saddles you ride are mostly from Velo factories. QBP is in the distribution business they are not a manufacturer, They work with wellgo to design these from current wellgo molds.
just sayin,

Yep, love my Velo manufactured ProLogo saddles. bought them all on EBay, one little scratch and some riders can’t ride them or an IBD has a side business selling at a nice discount.

I currently own three sets of iSSi pedals (two iSSi II and one iSSi II Triple). They function great but unfortunately their durability leave a lot to be desired. I have warrantied two of my three sets three times now. Two were due to the spring-tensioned cleat retainer (best descriptive name I could come up with) sheering their aluminum retainers off the main pedal body due to light rock strikes during riding…and I am not exaggerating by saying light. The other warranty was due to the pedal body brake away where the toe-piece of the cleat retainer screws into the pedal body. iSSi has been good about warrantying these pedals and has been open about their durability issues. They claim they are working on a solution. Overall, I like the pedals and their price but would recommend holding off on purchasing a set until they have resolved their durability issues.

I’m having the same problem as Quin. I’ve broke 2 sets of these pedals…going to put XT’s back on.