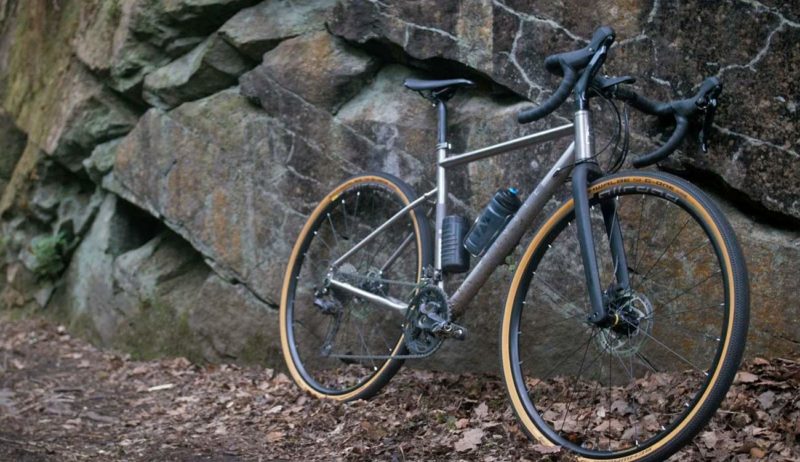 Ribble Cycles has updated their long running versatile all-road & gravel bike with the new affordable titanium CGR Ti gravel bike. Short for Cross Gravel Road, the CGR has long been Ribble’s most versatile do-it-all dropbar bike, and now in titanium it adds in a lifetime of chewing up any dirt, gravel, or paved road in its path… 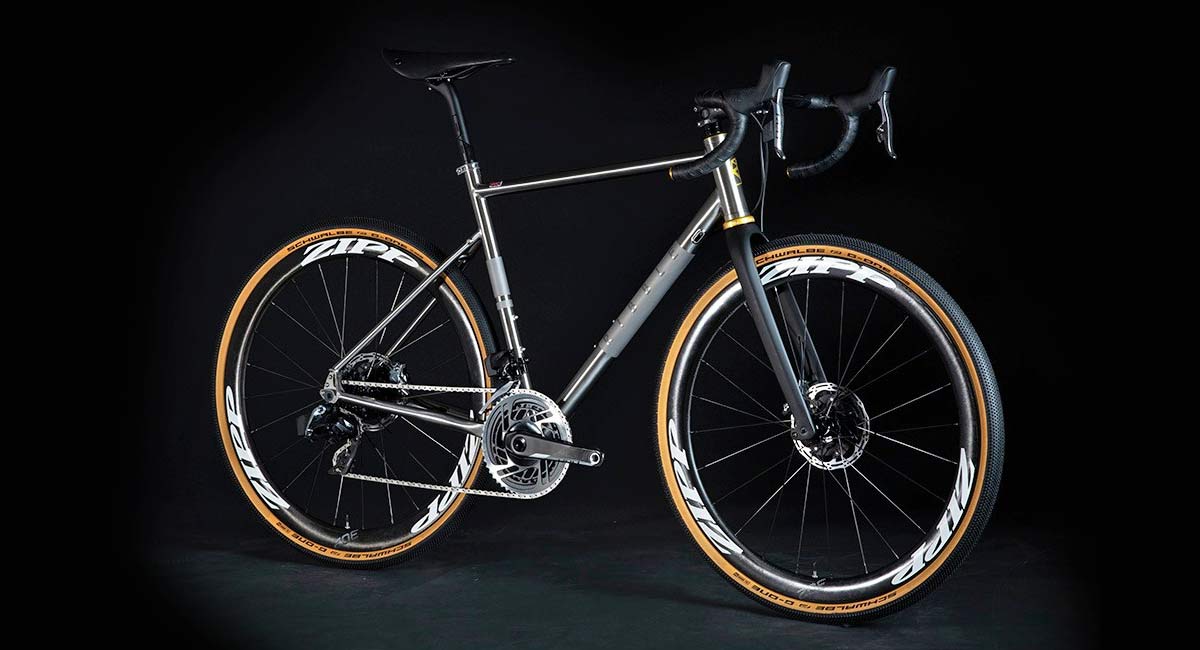 The ‘reimagined’ CGR Ti is the new flagship of the Ribble gravel fleet based on a new triple-butted and tapered ti tubeset, designed to bring the bump smoothing character of titanium to irregular road & gravel. Like the carbon & alloy bike in the CGR family, the new ti bike shares modern all-road & gravel details, plus the dropped seatstay design for even more compliance. 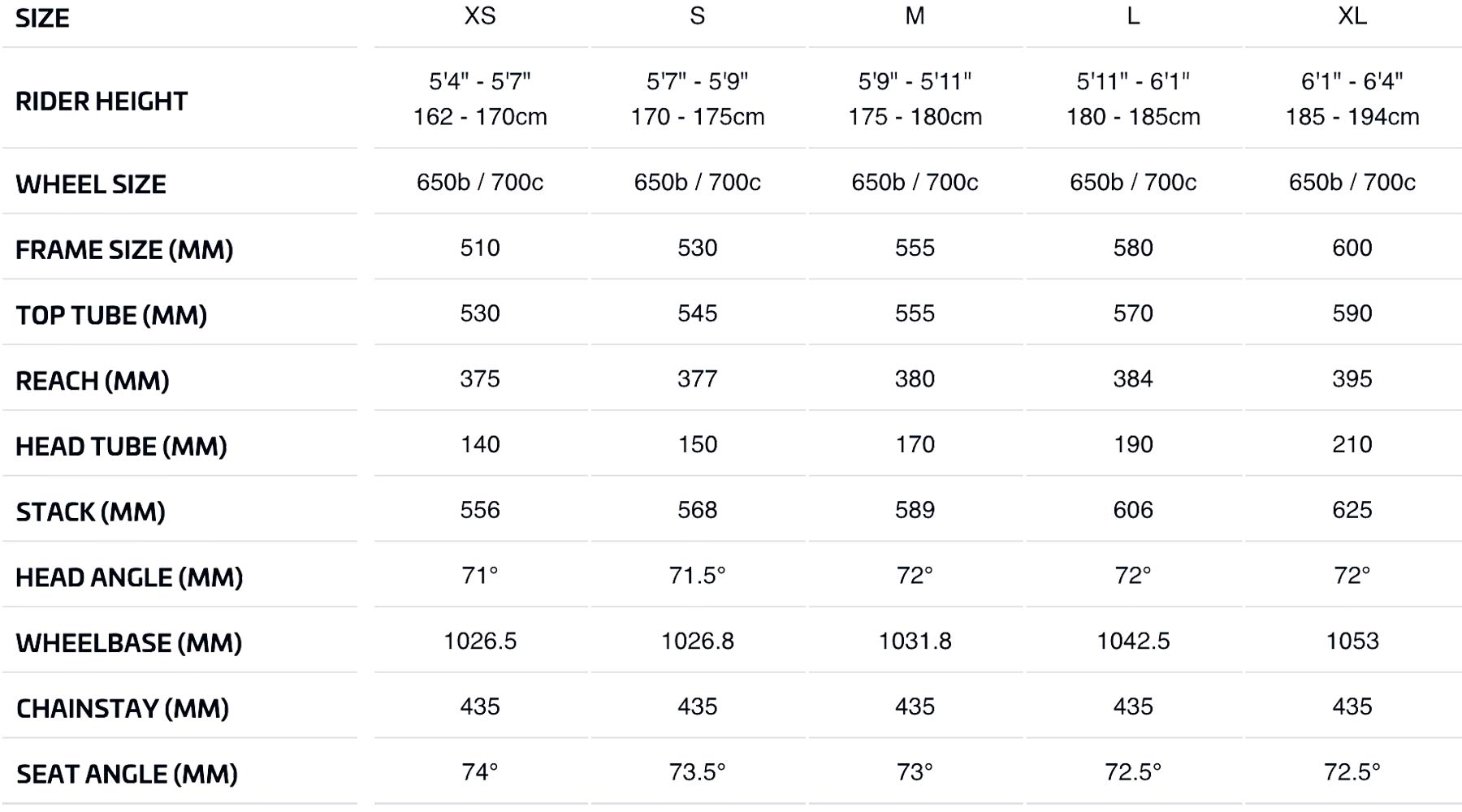 Focused around more endurance-leaning geometry and available in a five size range (XS-XL), the CGR Ti is all about versatility, down to the rear rack mounts and option to run full-coverage mudguards. So race it on gravel, or build one up as a super commuter. 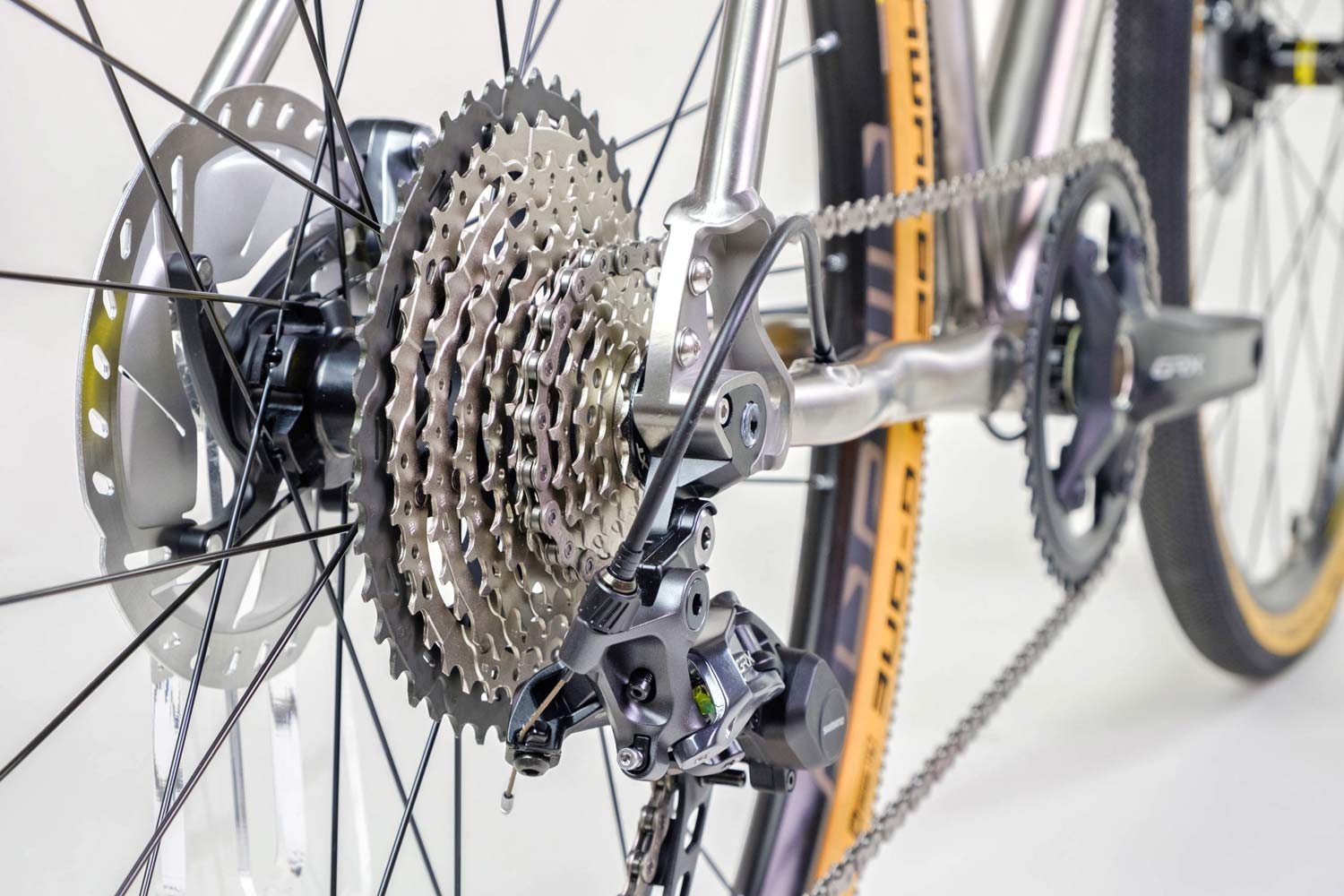 The CGR Ti is TIG-welded from subtly custom profiled triple-butted 3AL/2.5V titanium tubing, and features a straight 44mm headtube for the tapered steerer, full carbon fork. Ribble even lets you pick the ano color of the Level headset in either framesets or complete bikes. 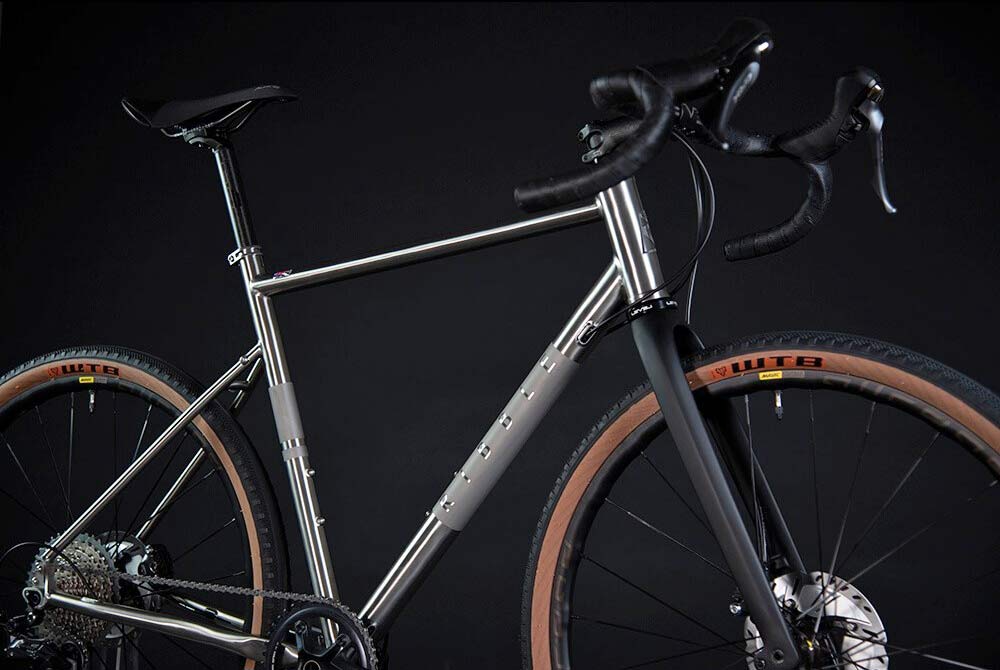 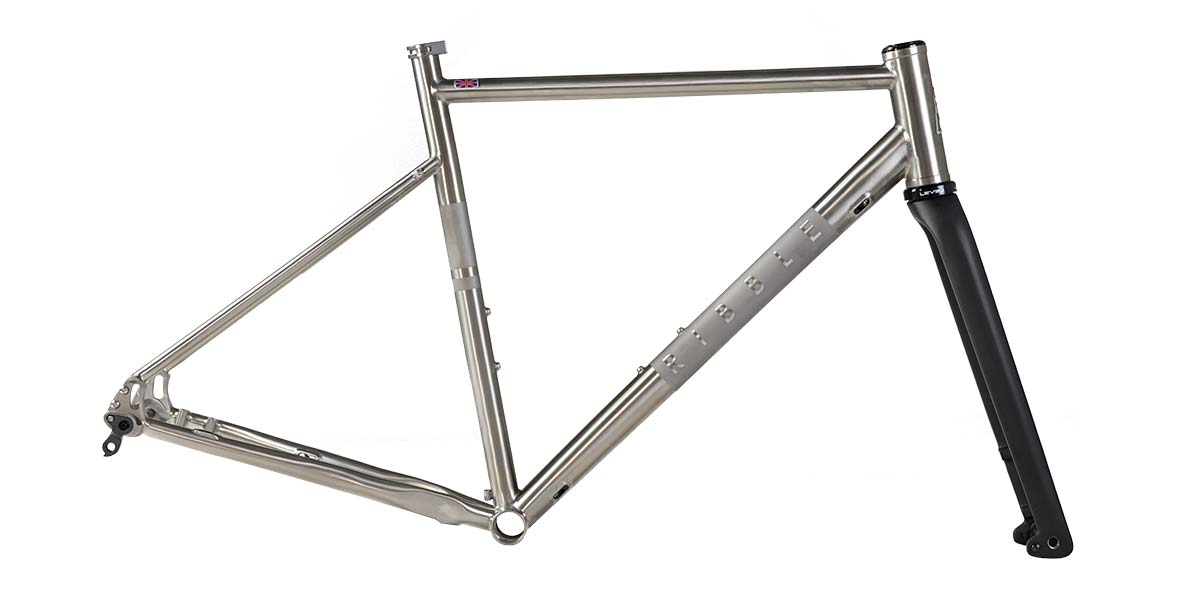 The new CGR Ti is available in five standard complete builds suited to several different riding styles, or a £1800 frameset. The frame & fork aren’t manufactured in UK, but the British direct-to-consumer bike company prides itself on building up each complete bike in house (since 1897 apparently) which also allows them to offer more custom spec options via their online BikeBuilder tool.

Standard builds include a more all-road focused CGR Ti Sport for just £2300 with a Shimano 105 compact road double 40mm tires and full-coverage fenders. The £2800 Enthusiast steps up to an Ultegra mechanical double for faster all-roading. 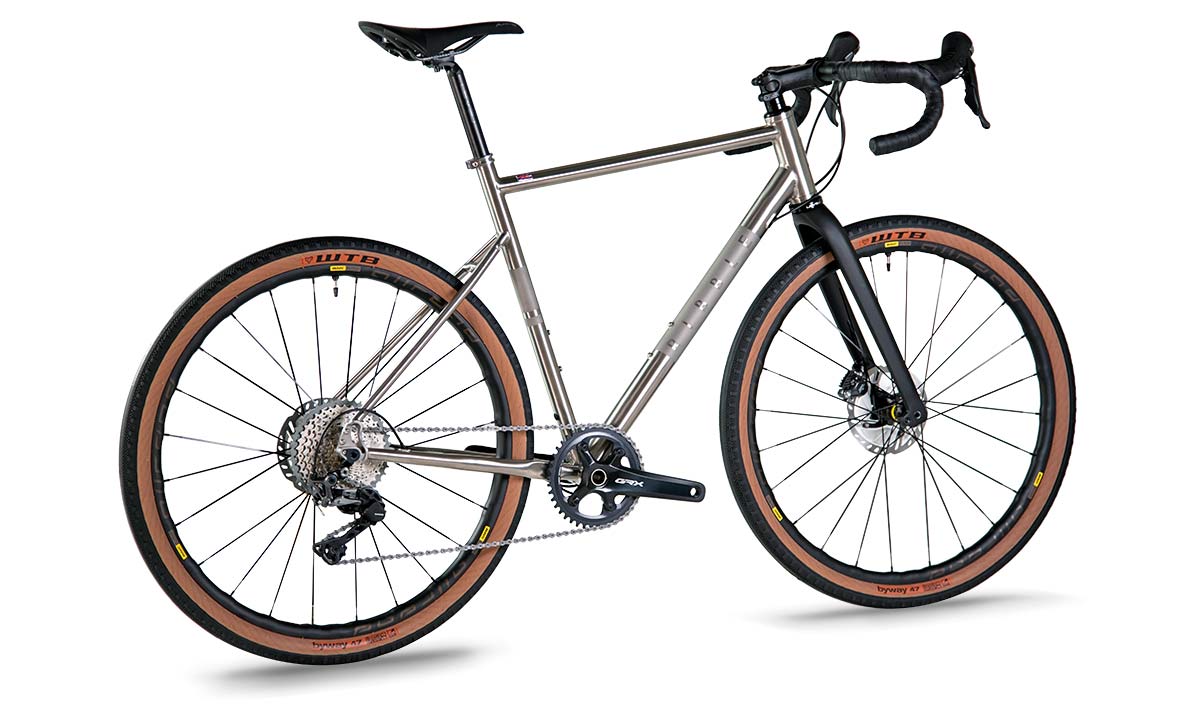 Heading more off-road, the £2900 CGR Ti Gravel drops back down to 47mm tires on 650b wheels, with a GRX 1×11 drivetrain and flared dropbars.

All of the bikes are available for pre-order now, with XS, S & L bikes expected to be delivered in mid-August, while the M & XL will ship later at the end of September 2020.

I like it, but I would like it more if the chainstays were shorter than 435mm. Presumable, a T47 BB shell with internal bearings, combined with offsetting the chainline slightly by making the 2x available only with GRX or Sram’s “wide” spindle, would have allowed the same tire clearance with a 5-8 mm shorter wheelbase.

Is this actually new? They have had a similar looking CGR Ti in the lineup for a yer at least.

Damn, this is a nice looking bike, and the price for a frame set is damned appealing. I wonder about the QC of the frame construction but only because of how welding Ti can go wrong.

I was wondering the same thing. I definitely had a Ribble CGR Ti on my shortlist when shopping around for a gravel bike almost half a year ago.

CGR are probably very nice bikes, but Ribble service is terrible. Looks like I’ll never have the ordered Ti I dreamt of. When it arrived on monday, disappointment was huge, as it has clearly suffered multiple damage, probably from some heavy shocks…imagine the force to warp a disc rotor (mine on the front). And disappointment goes on as Ribble doesn’t offer anything else than fixing what’s apparent so far (and I’ve given up checking the bike to discover othe defects). I wanted a new bike, not a refurbished / doubtful one, and I can’t say it’s on the cheaper side. I can’t trust this unit, as I can’t trust Ribble anymore, as well as the french cycling community I’m part of, some of them considering buying Ribble…before my sad experience. No other option than a refund, and obviously spreading the word. Too bad.

Am I reading this correctly Did? Did you get a full refund or was that not offered to you?

Just took delivery after a long, expected wait. I have nothing but high praise for Ribble and the bike itself. I’ve obsessively examined every nook and cranny of the bike, rode it hard in every condition available to me here in Sacramento, CA, and I could not be happier with it. As one who has long had the n+1 disease many of us cyclists are afflicted with, this marks my 12th bike in the past 15 years, and I’d place it near the top of the heap for checking the most boxes in what defines a great bike.

Looking at getting a first bike again, problem is , I keep flipping between road and gravel , my biggest riding around where I live would be road , but I want the option of off road, bikes I’m considering are domane al5 , cannondale topstone 105 , and now the Ribble CRG ti sport I think. This happens to be the most expensive at $2500, compared to $1750 and $1800 , but I live in cape cod Massachusetts, USA , The Ribble would need to be shipped. This is going to be an investment for me financially, need to make the right decision. Any thoughts, the ti is the forever frame, or as you guys say N+1,maybe my second bike .Less I forget, the British flag emblem is a nice touch, wonder if they would swap it out for Scotland emblem . Thanks for any input, Chuck

Would you in what country the frame & fork are manufactured ?