It wasn’t long ago that the steel cyclocross Swiss Cross got its own 25th-anniversary model, having been first built in the mid-90s. I even wrote a quick review of it years before that in its original disc brake guise. Over the years, the Swiss Cross has really only slightly evolved, keeping much of what’s made it a sought-after bike. What the 50th anniversary gets is a limited edition paintjob in classy Ritchey Red with white graphics harkening back to the frame builder’s Palo Alto, CA origins.

“As a mere teenager, Tom Ritchey welded up his first bicycle frame in his parents’ garage in Palo Alto, California more than 50 years ago. And he designed and built the first Swiss Cross cyclocross bike in the mid-1990s so that the bike’s namesake, Swiss cycling legend Thomas Frischknecht, had the best bike possible for his victorious cyclocross pursuits around the world.

The new 50th Anniversary Swiss Cross draws a direct line from that first bicycle frame Tom welded, to the bike Frischi piloted to so many championships, to a modern ‘cross and gravel racer.” The bike is still TIG-welded from traditional small-diameter triple-butted Ritchey Logic heat-treated steel tubing. It manages to tuck in a modern-ish straight 1 1/8″ headset by building the headset into the narrow headtube. It gets a classic 27.2mm seatpost inside a bi-lam seat cluster with an integrated seatpost clamp,  a classic 68mm BSA threaded bottom bracket, a replaceable stainless derailleur hanger, and fully external cable routing. It does succumb to a bit of modernity with a full carbon WCS Carbon Cross Disc fork, 12mm thru-axles, and flat mount disc brakes. The 50th Swiss Cross joins the 50th Anniversary Road Logic that debuted last spring (and quickly sold out). And two more anniversary edition frames will debut in the coming months – my money’s on an Ultra/P-29 mountain bike and an Outback gravel bike. But we could always cross our fingers for a Break-Away tandem, right? 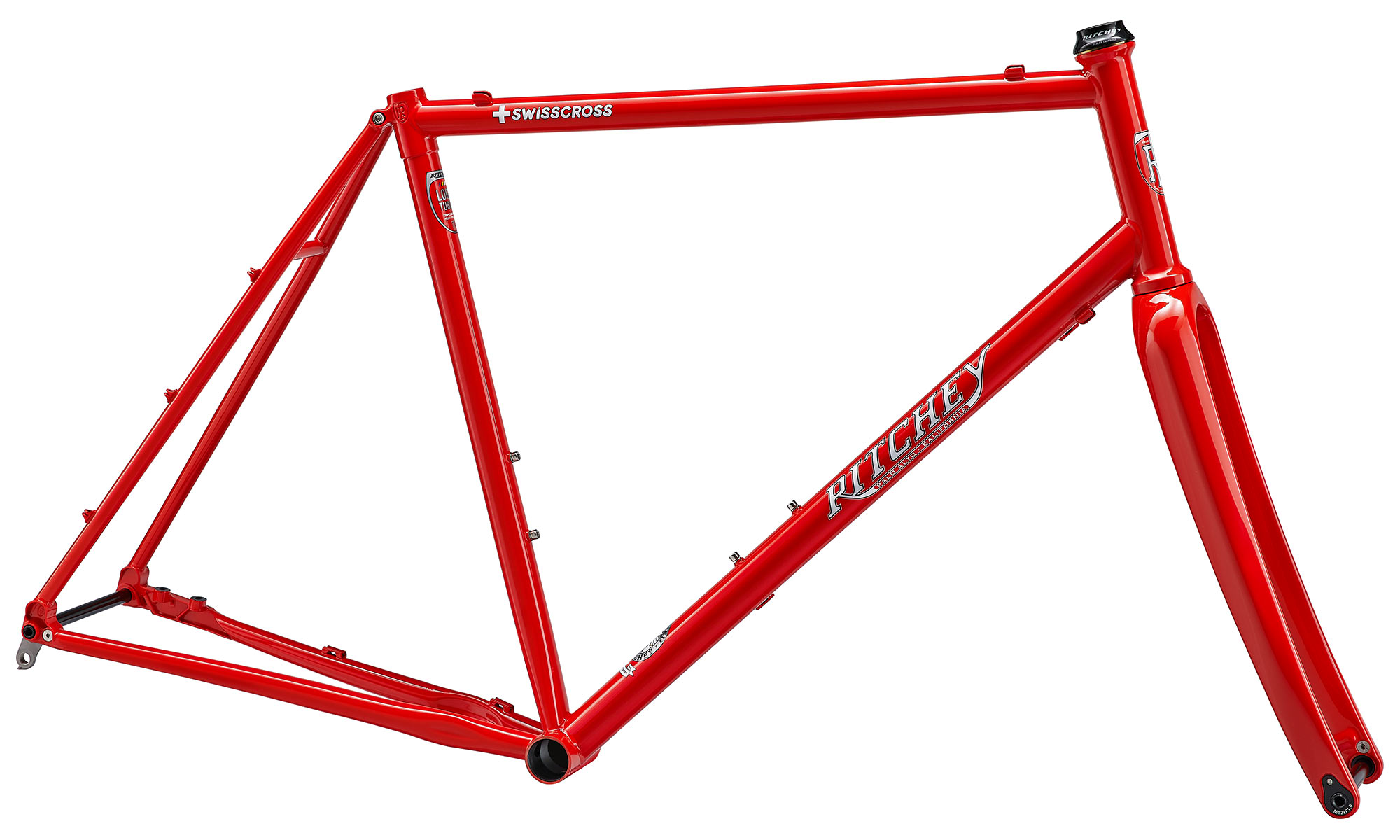 The Ritchey 50th Anniversary Swiss Cross is only offered as a frameset for $1700 / 1713€ and is available now from global Ritchey dealers and direct from Ritchey online, while supplies last. No official word on how many framesets are out there. But if you keep your eyes peeled next month, you can spot Ben Frederick racing his at the UCI CX World Cup & Superprestige series cross races in Belgium this coming month.

Beautiful! Nothing beats a classic yet top class frame like this. Yes, modern, lightweight carbon bikes will beat it to the finish line, but I’m pretty sure this one will outlast all of those and will still be happily ridden in 20 years time.

Riding my Mondia Super Cross since ’79. At least 100K miles, tour, trail, hunting and commuting It’s back in style again. Kept my fringe vest too.

By the way, the Mondia was Swiss built of English tubing, French lugs (and threads) and Italian dropouts. Ride of a dozen World Cup CX champs in the 60s and 70s.

i think this is good. I like the steel and the straight lines thank you