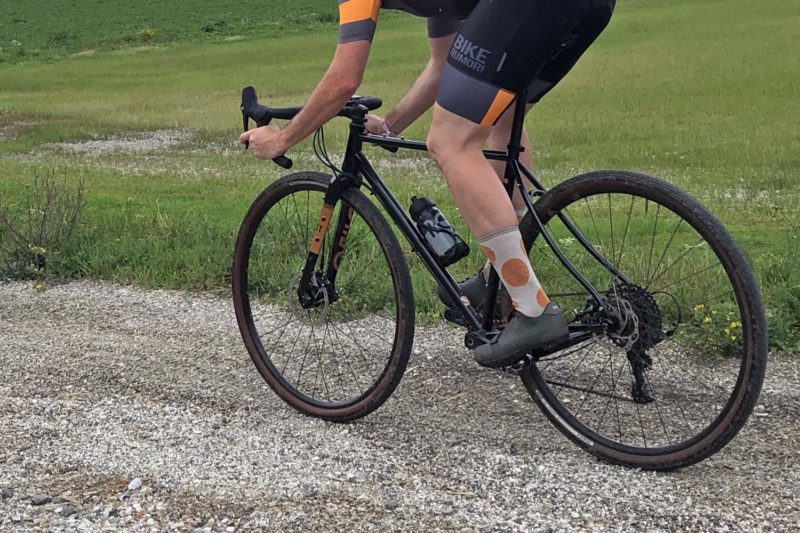 There are many new & upgraded bikes coming from the gravel riders of Rondo over the next several months. Rondo are venturing further off-road with a new steel 29er mixed-surface adventure bike called the Bogan – built to bikepack. A highlight of that new bike is a new lighter fork that will also trickle over to the Ruut family of pure gravel bikes. And those gravel Ruuts get updated too, with new frames in steel, aluminum & titanium, plus several new build options. 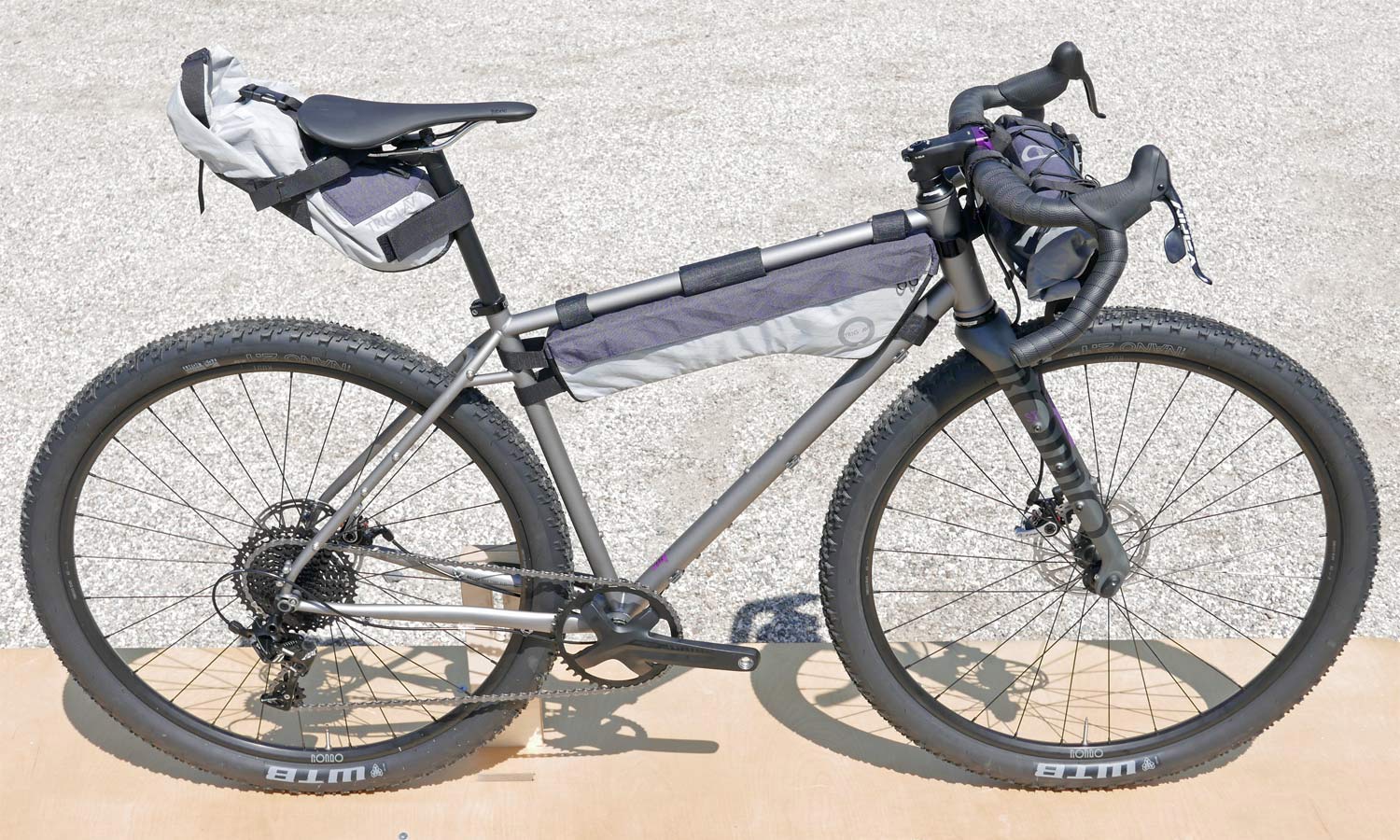 The biggest new offering is the Bogan itself. Developed for more loaded bike packing, the steel adventure bike is built around bigger tires, longer & lower geometry (in S-XL) with a 70/70.8° head angle, and a more burly frame. 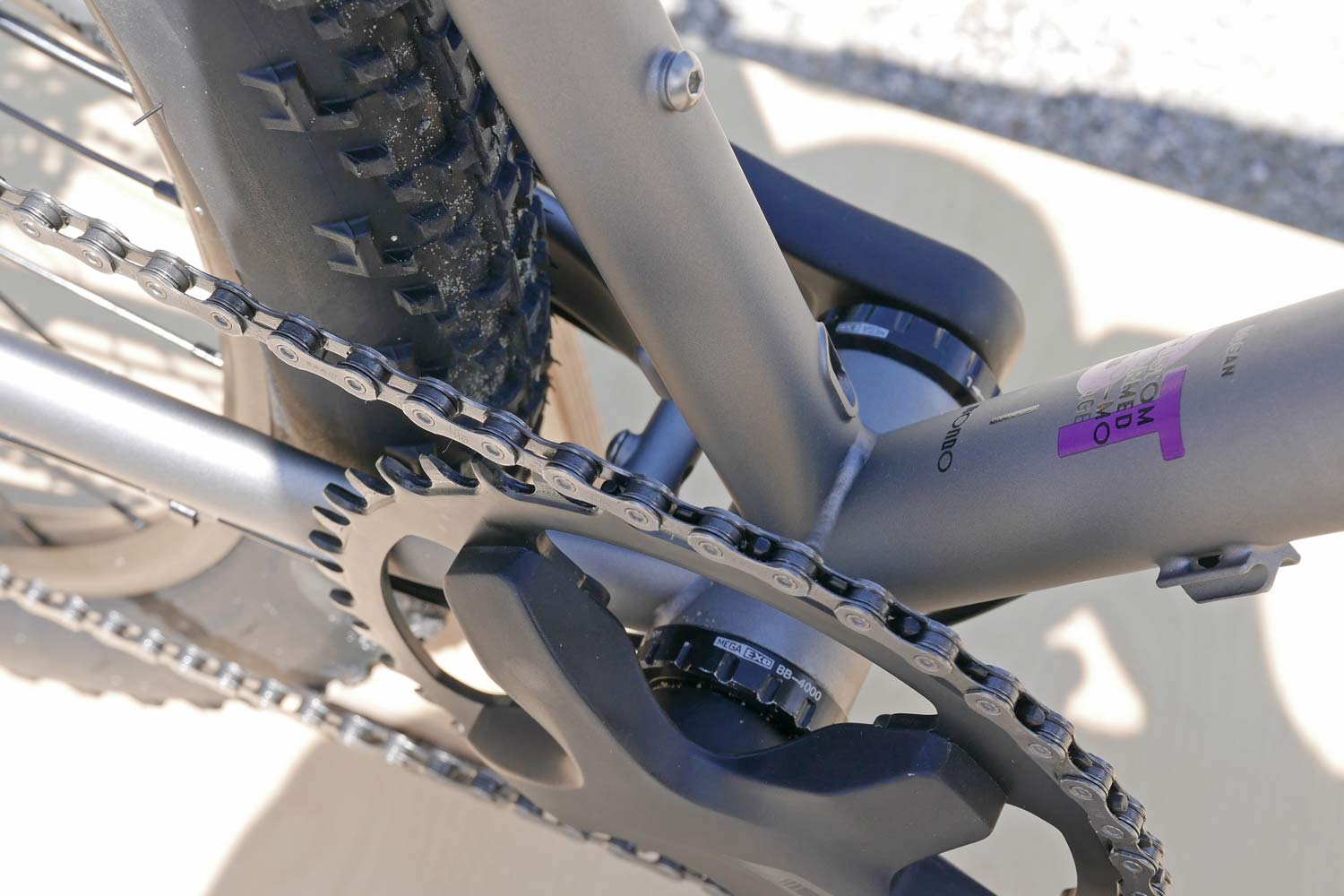 The Bogan’s large volume, fast-rolling 29×2.1″ mountain bike tires roll over any terrain, while longer chainstays, a longer front center than the more gravel racy Ruut, and the lower bottom bracket create more stability no matter the terrain. The bike features external cable routing & mechanical brakes for ease of maintenance out on tour. But it also gets internal dropper post routing if you plan to ride steeper trails (albeit 27.2mm diameter), and compatibility with 2x drivetrains. 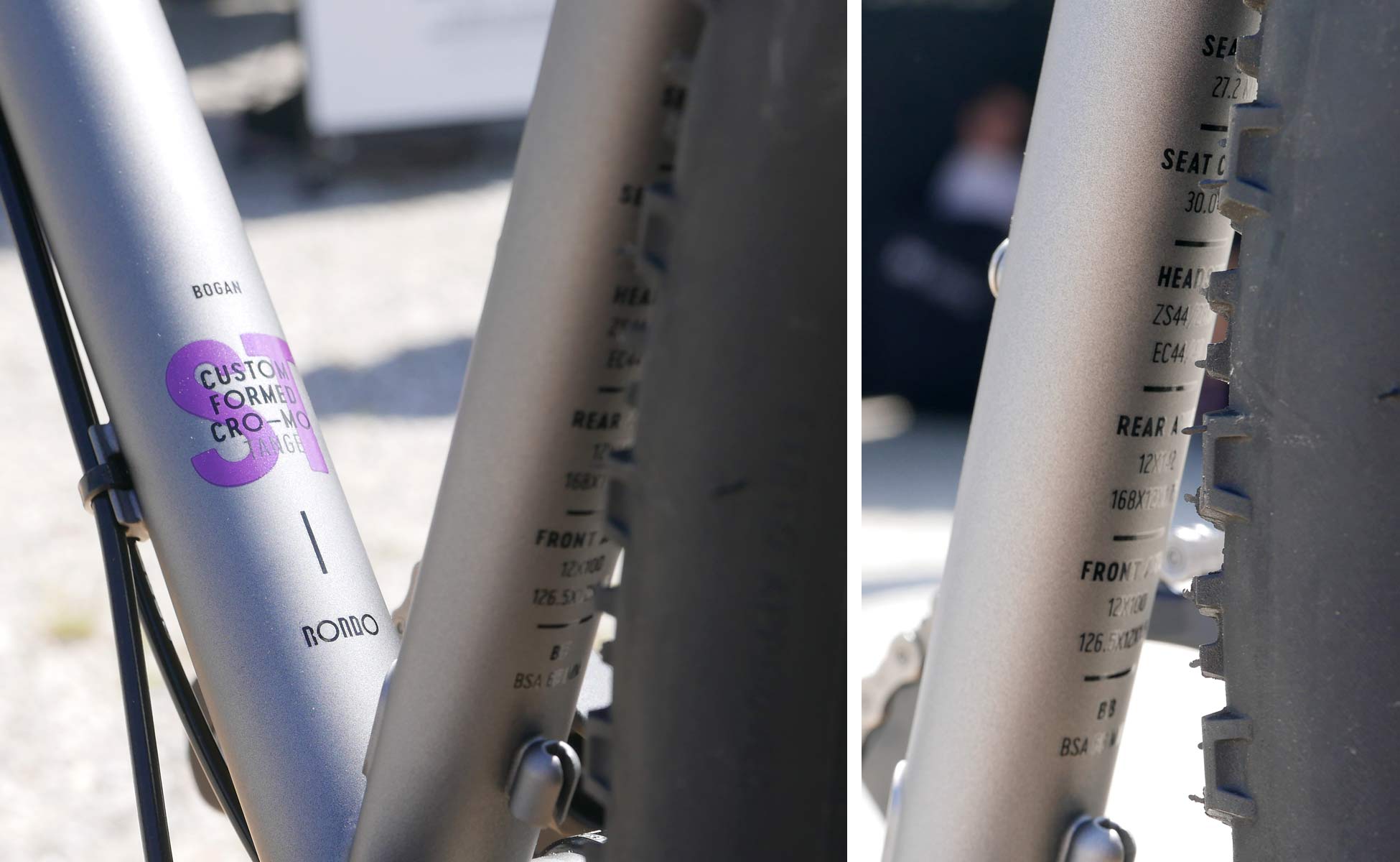 The bike uses 12×100 & 142mm thru-axles and flat mount calipers, a 44mm headtube for a tapered steerer, plus a standard 68mm threaded bottom bracket. 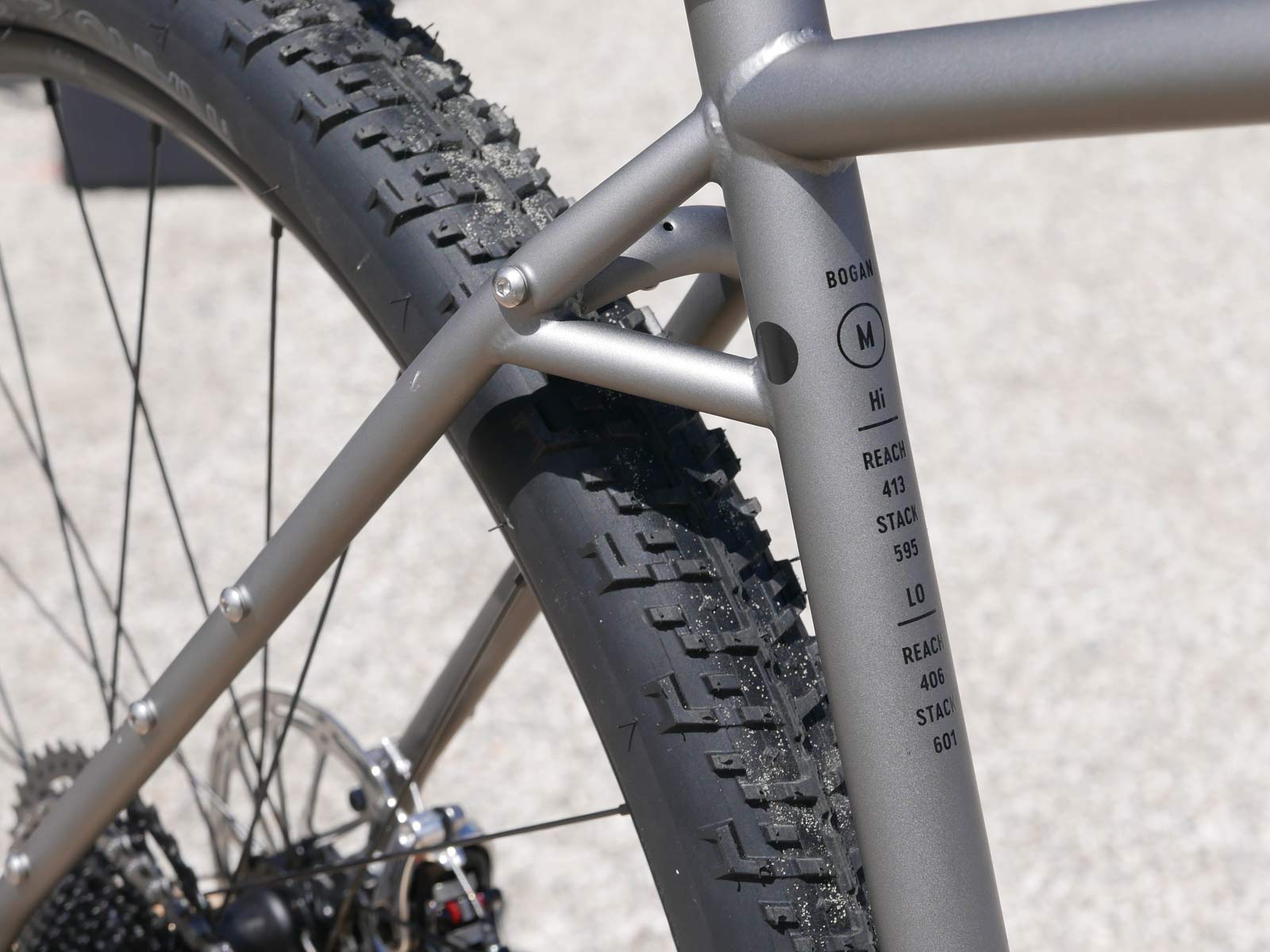 The Bogan gets tons of accessory mounts like full-coverage fender, rack & multiple bottle mounts. Rondo rates the Bogan for up to 54mm wide tires. 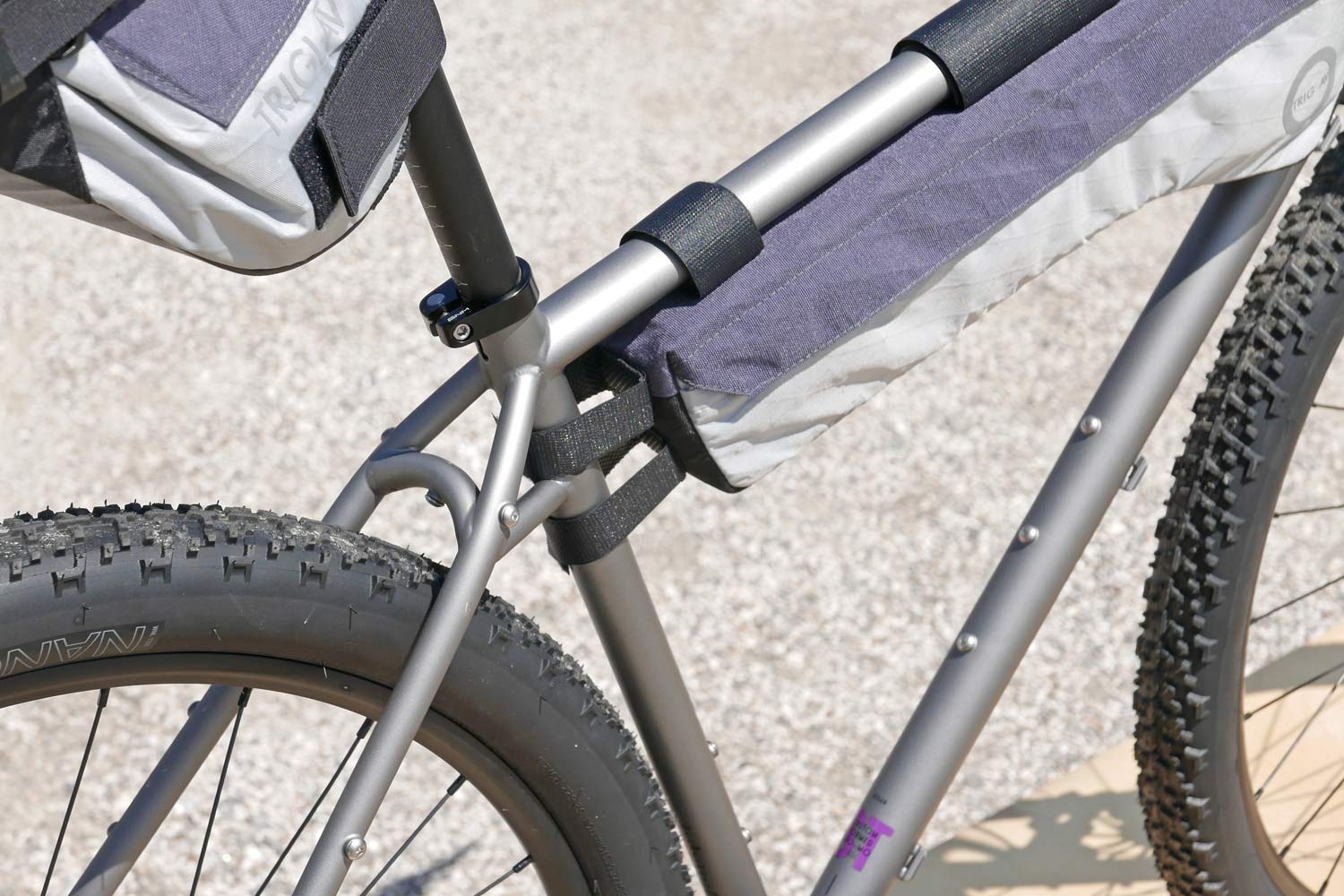 It even features a rather unique lift handle strut between the seattube & driveside seatstay. 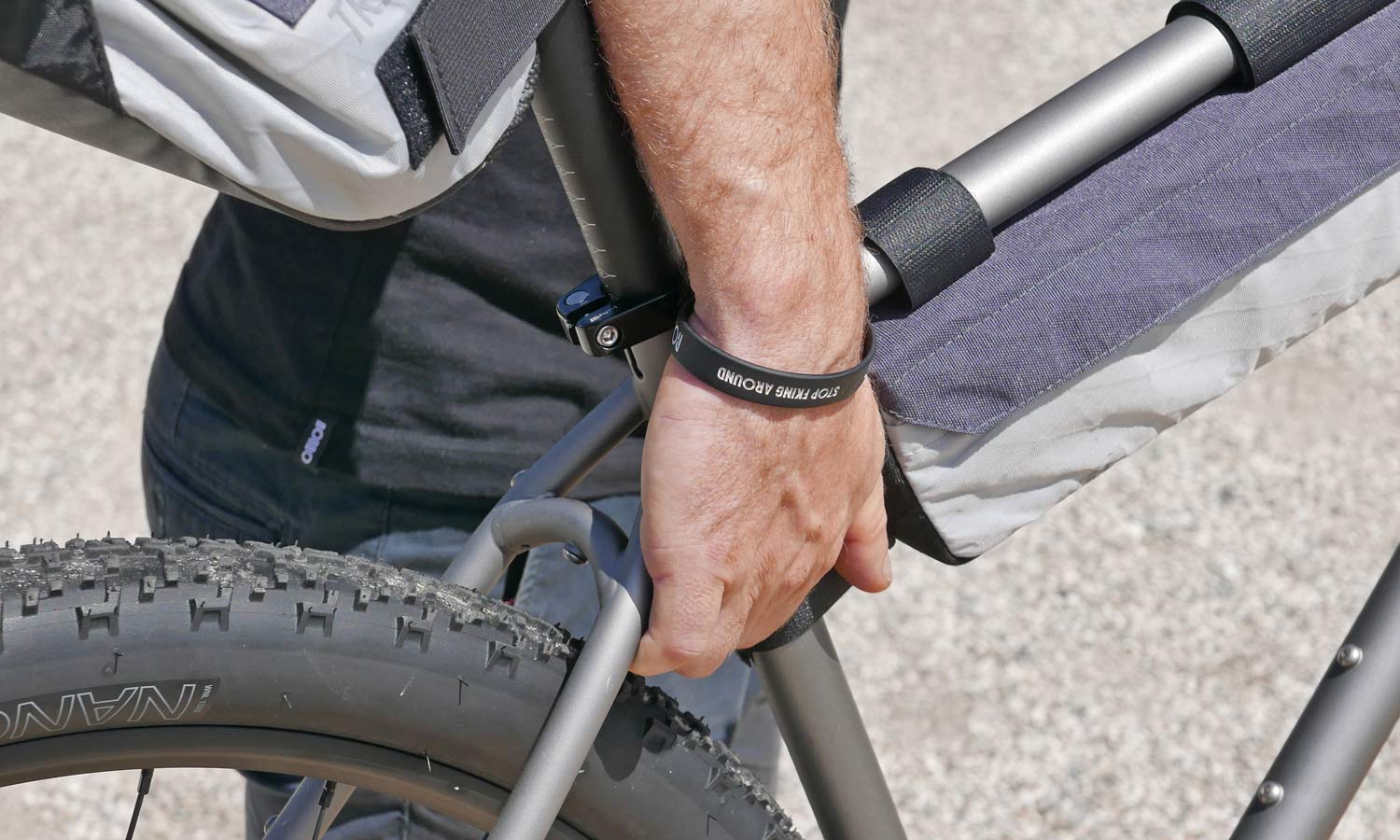 Anyone who has packed up a bikepacking bike with a full set of saddle, frame & bar packs to go on tour has realized that it becomes difficult to pick the bike up when you have to lift it over obstacles. The Bogan’s lift or carry handle makes that a bit easier with a dedicated spot to grab ahold of. 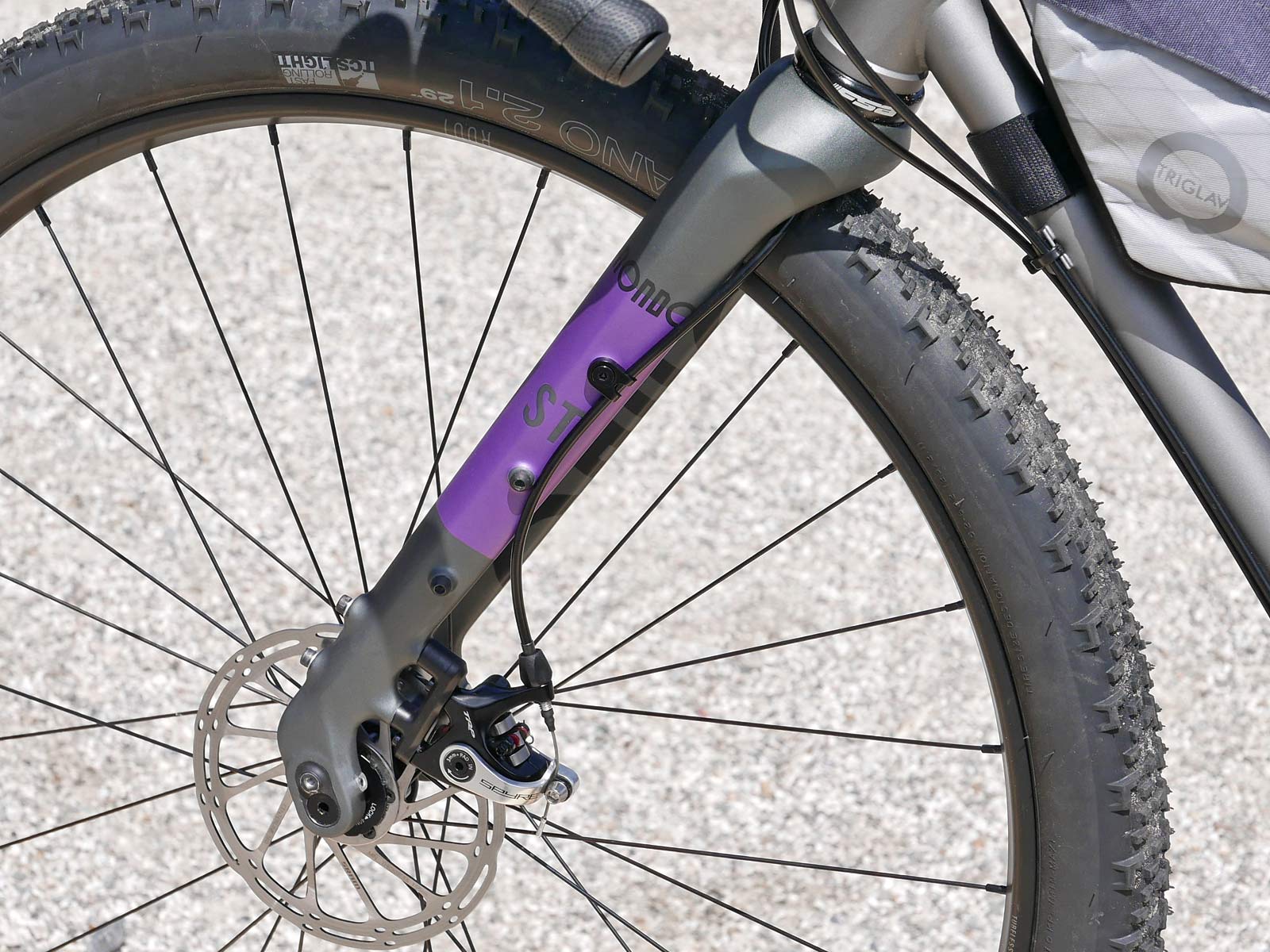 The Bogan’s fork is a new, thinner & lighter TwinTip 2.0 Carbon with Rondo’s signature variable geometry flip chips at the axle. Easily switch from low to high settings to dial in the ride you want – changing the head angle by 0.7°, the bottom bracket height by 6mm, and the fork offset by 10mm.  The fork also includes triple cage/anything cage mounts on each leg for additional carrying capacity. 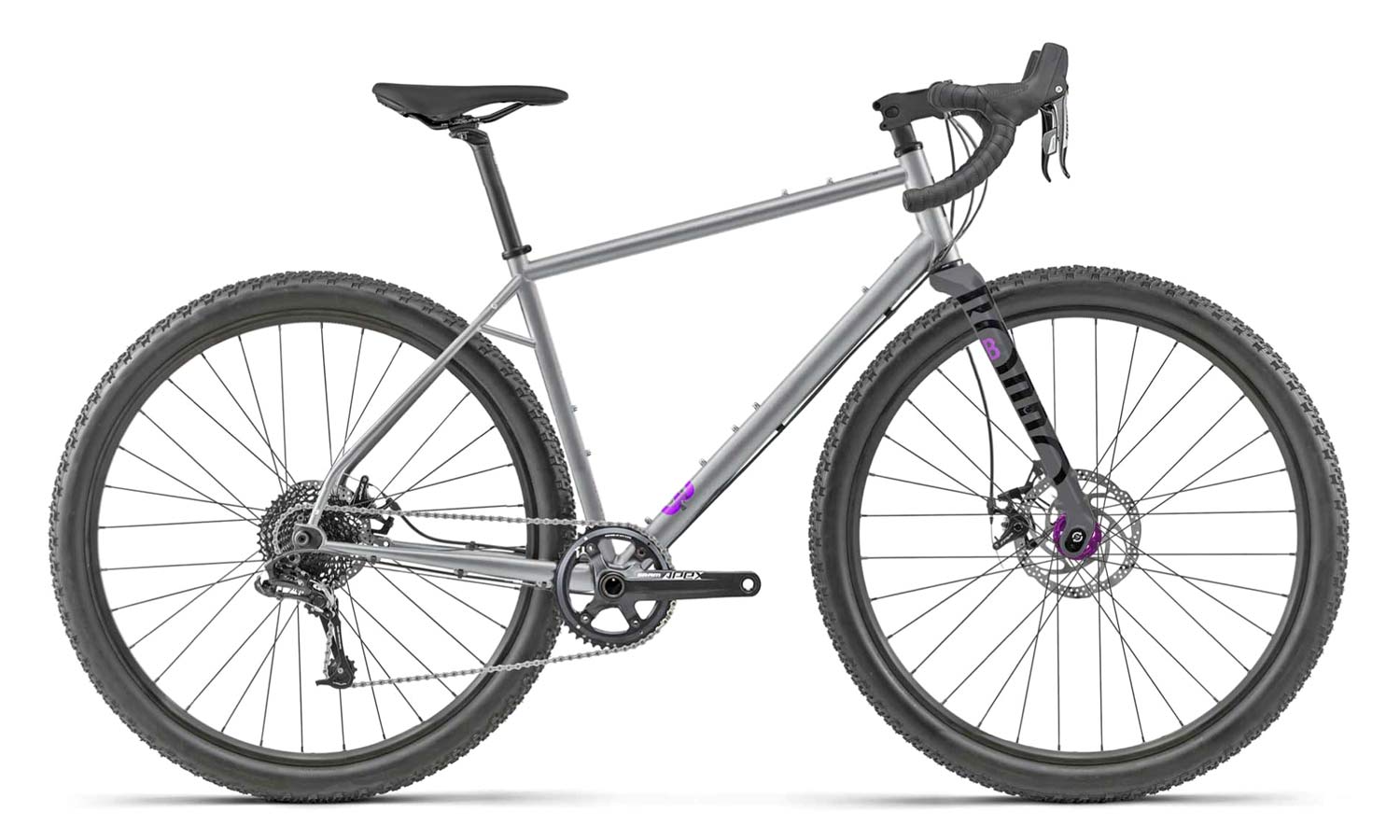 The new steel adventure Bogan will sell for an affordable 2000€ complete in a single bike build with SRAM Apex 1 shifting and TRP Spyre mechanical disc brakes. 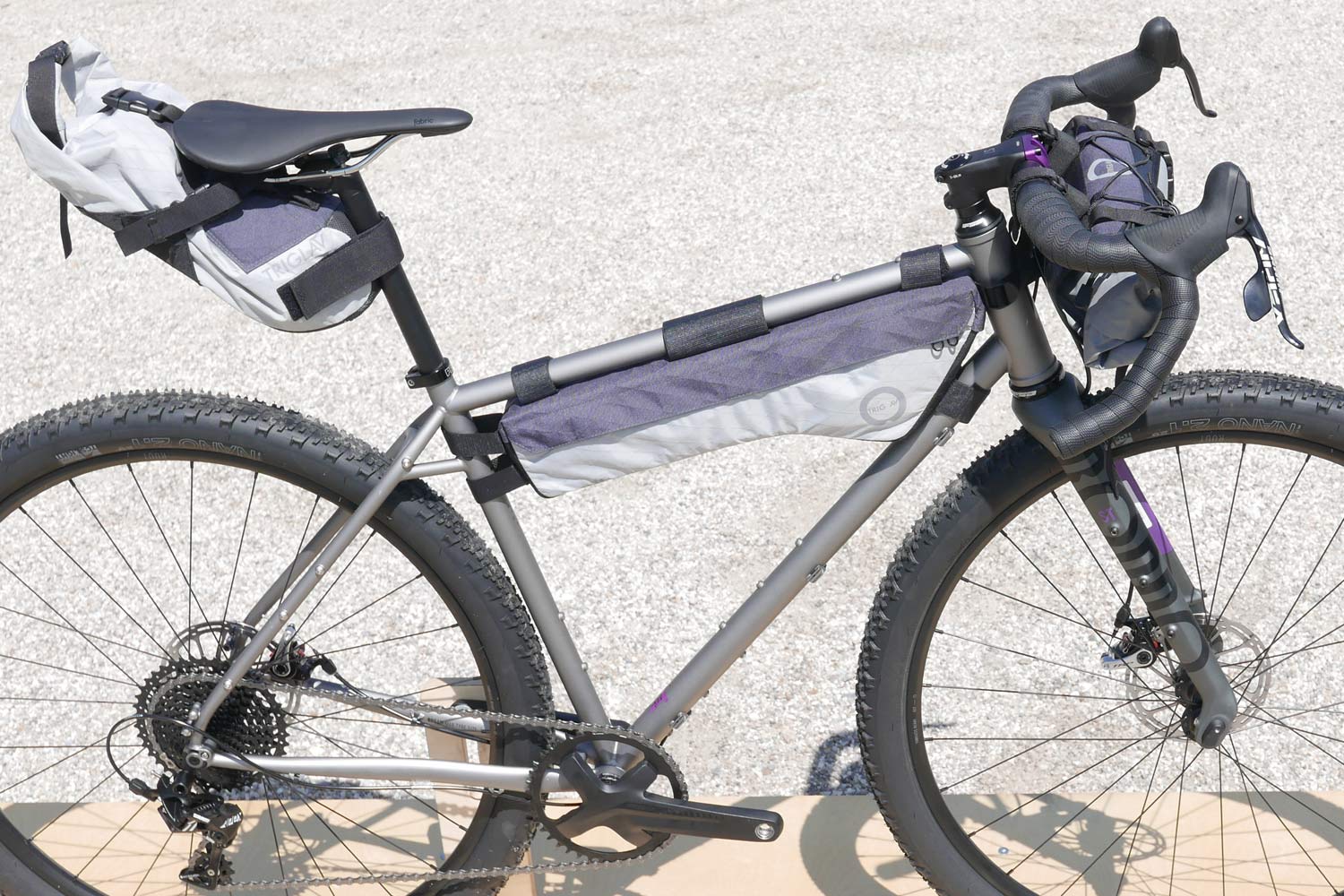 An all new bike for next season, Rondo’s steel monstergravel Bogan was designed specifically to carry bikepacking packs, and together with fellow Polish bag-making partner Triglav, they will offer a custom fit set of packs for the new bike. 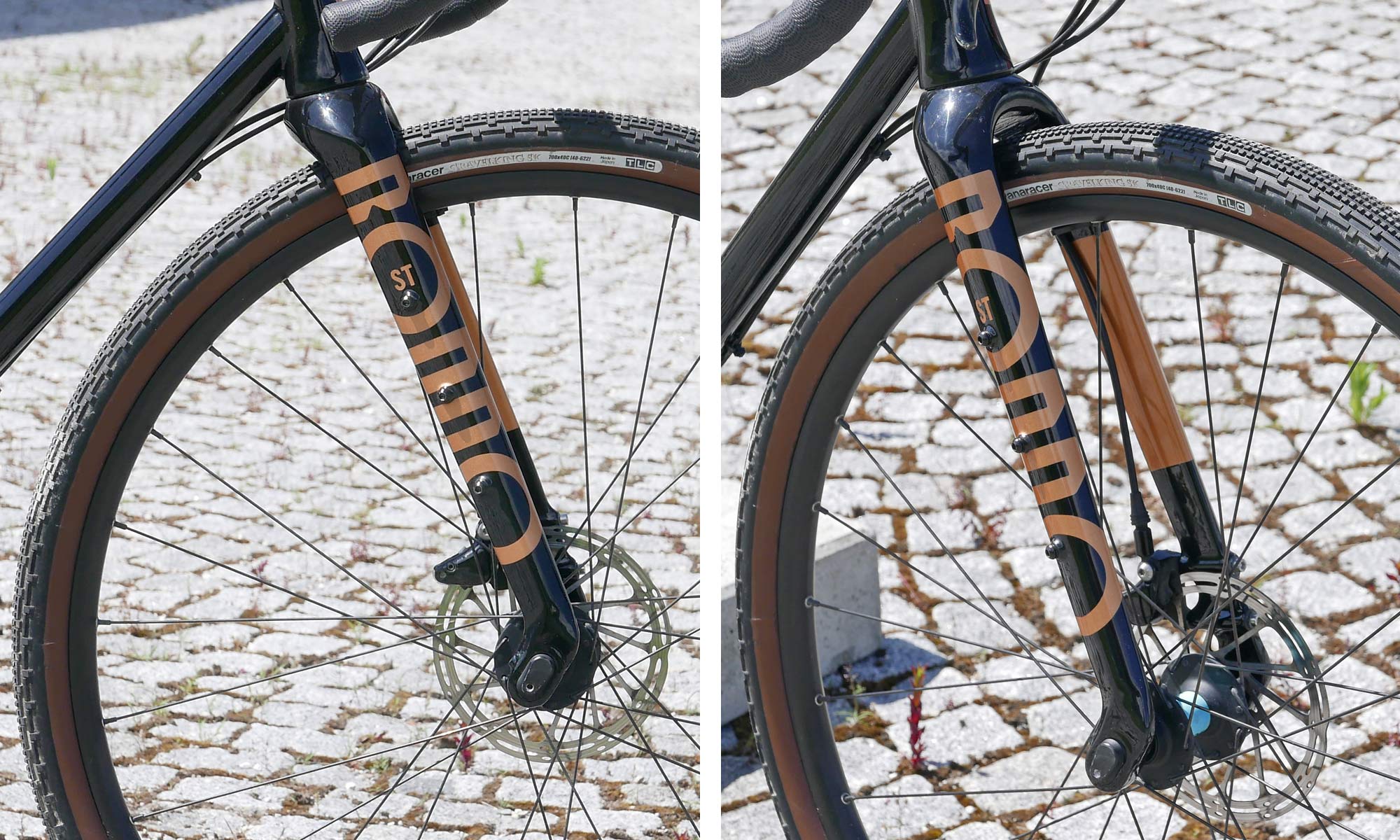 That new TwinTip 2.0 Carbon fork on the Bogan will be the highlight for 2020 Rondo gravel bikes. While many riders liked the performance of the original Ruut and its variable geometry setup thanks to the fork flip chips, the massive original TwinTip fork didn’t seem to fit visually to the thinner tubes of the steel, aluminum & titanium Ruut gravel bikes. 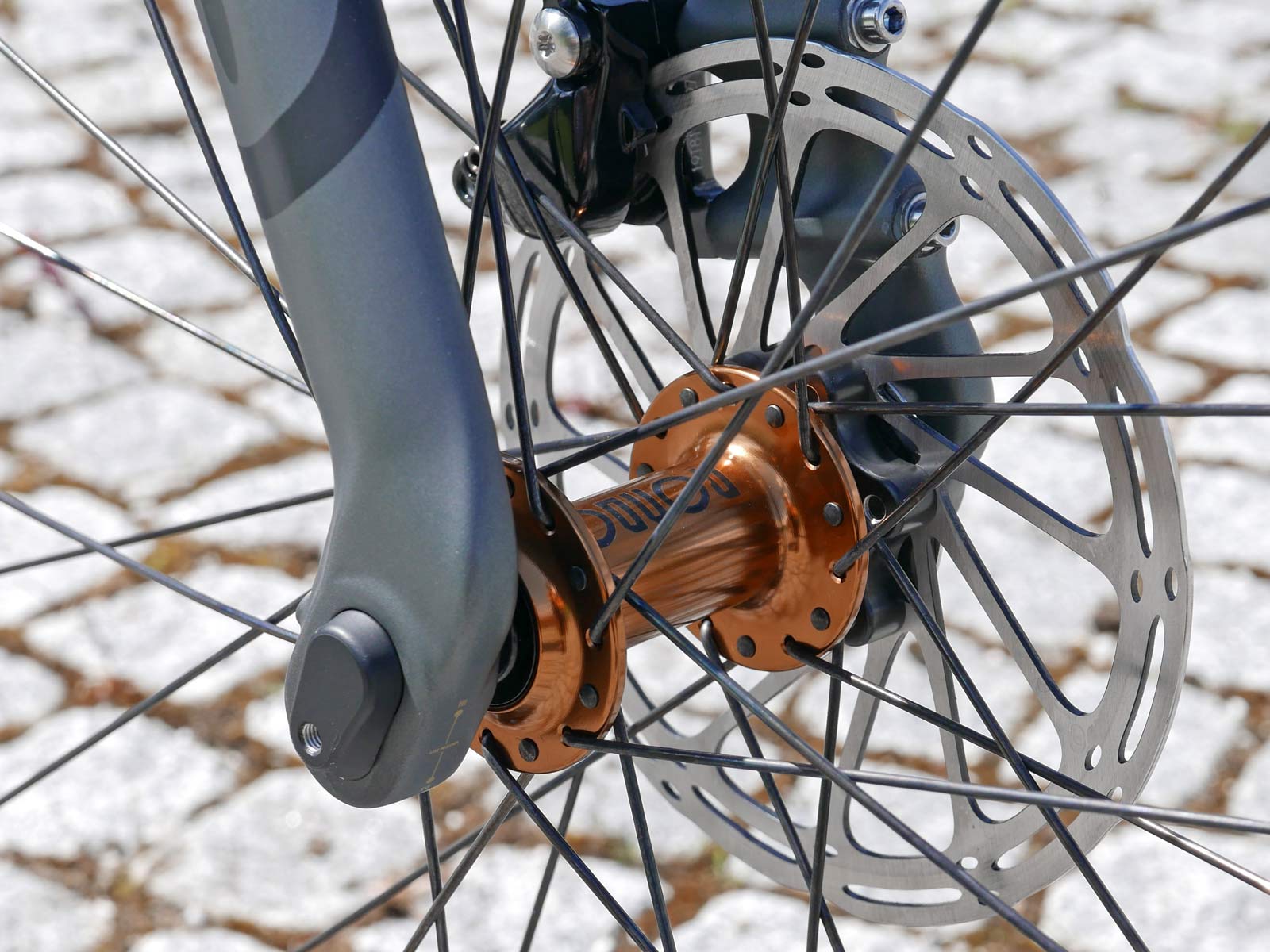 But now the same lighter, horizontally stiffer, and vertically more complaint fork on the adventure Bogan will make its way to the gravel Ruuts as well. The new fork has the same two-position dropout that changes the head angle by 0.5°, fork offset by 10mm & bottom bracket height by 4mm on the gravel bikes – offering riders the ability to tune their ride for gravel racing or more stability.

It even adds more tire clearance thanks to its duties on the Bogan, which means you can put up to a 29×2.1″ tire on the front of the new Ruut gravel bikes that get the fork. 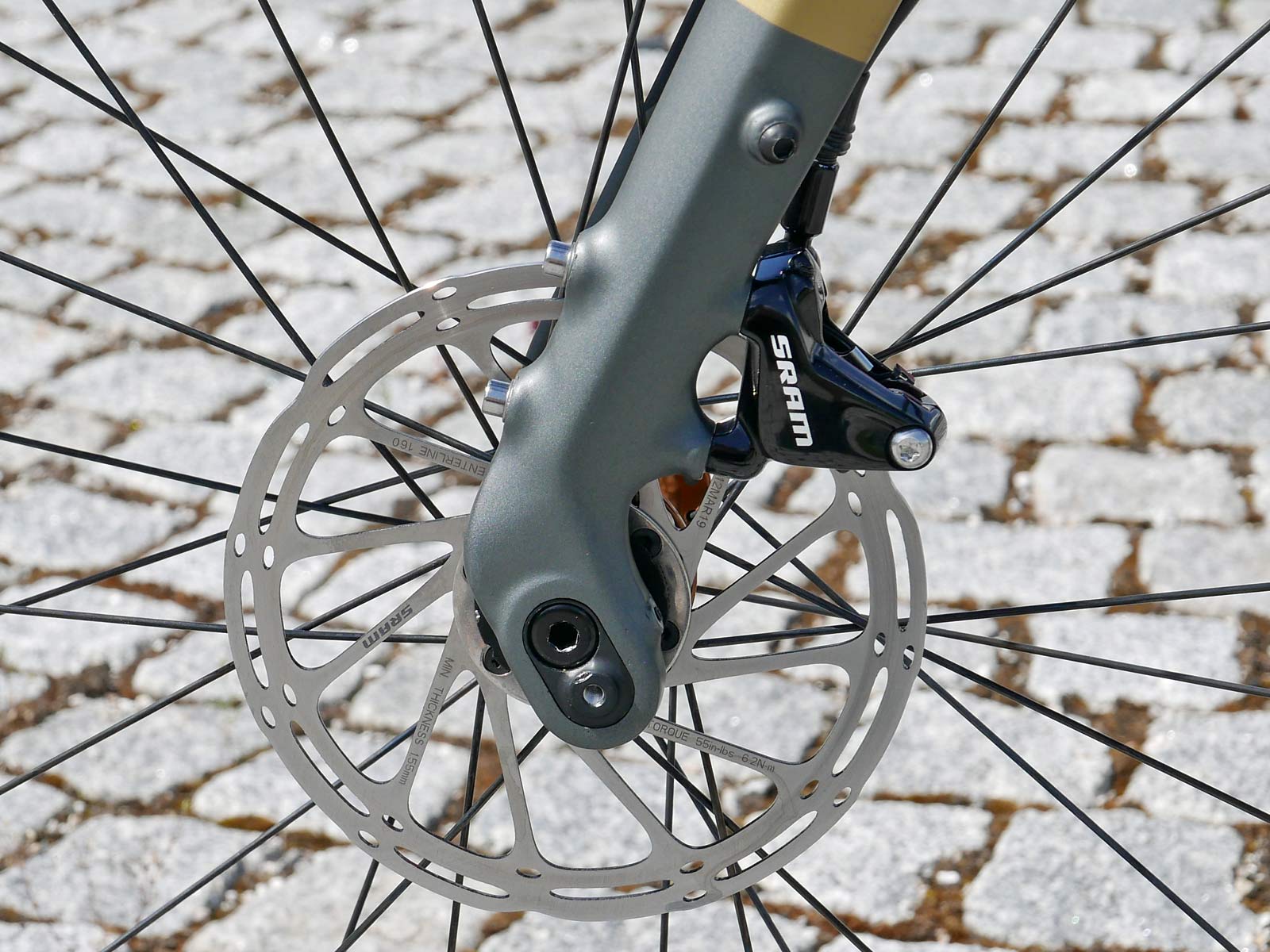 The new fork also brings with it a new thru-bolt direct flat mount brake caliper mount for a cleaner, adapter-free 160mm rotor setup (or 180mm front rotor like on the Bogan with an adapter). 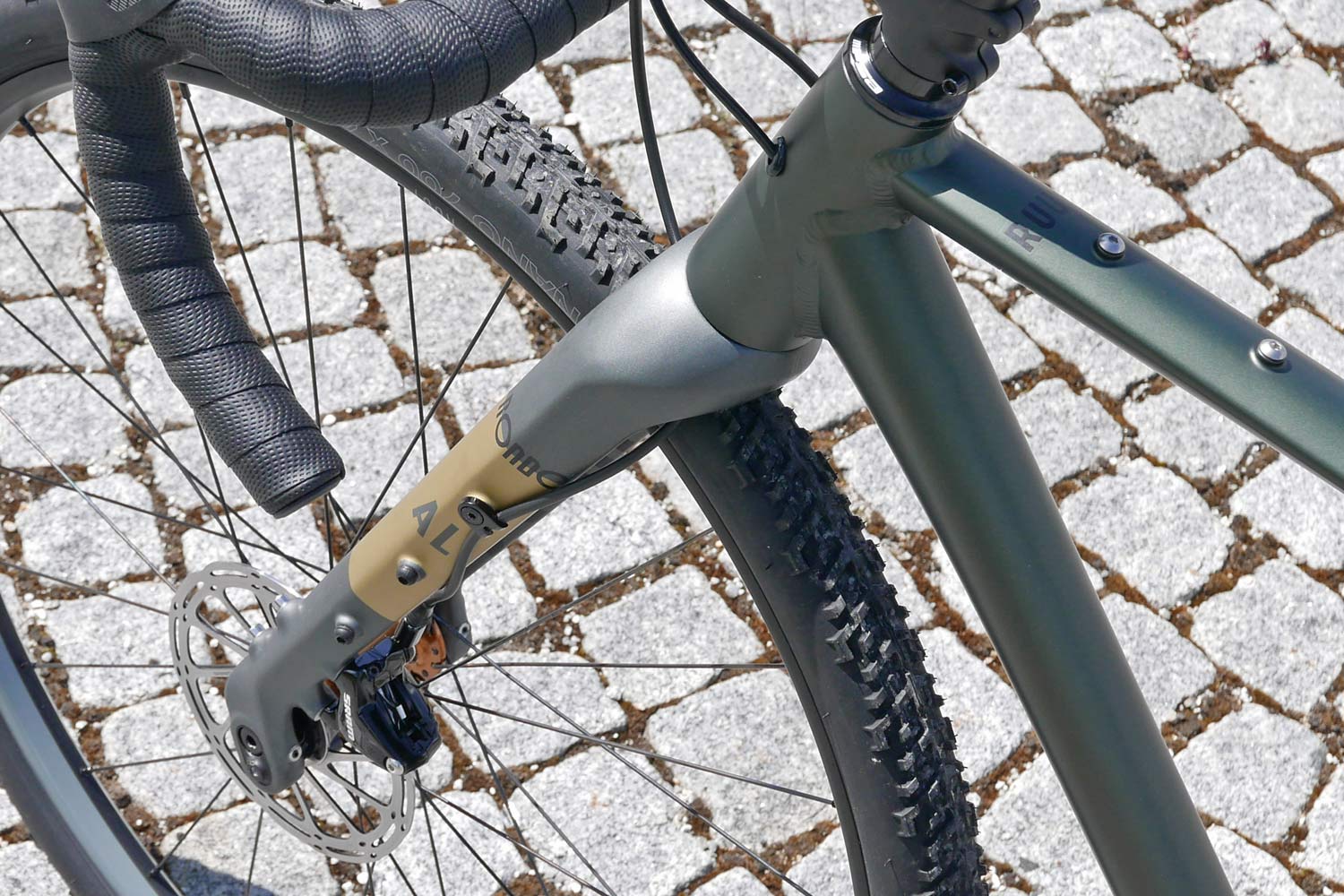 Even though it is said to be lighter than before, the new TwinTip 2.0 Carbon fork adds full fender mounts and 3-bolt anything cage mounts on both legs. And the final production version includes internal routing for the front brake through the left leg (these pre-production forks are all routed externally.) 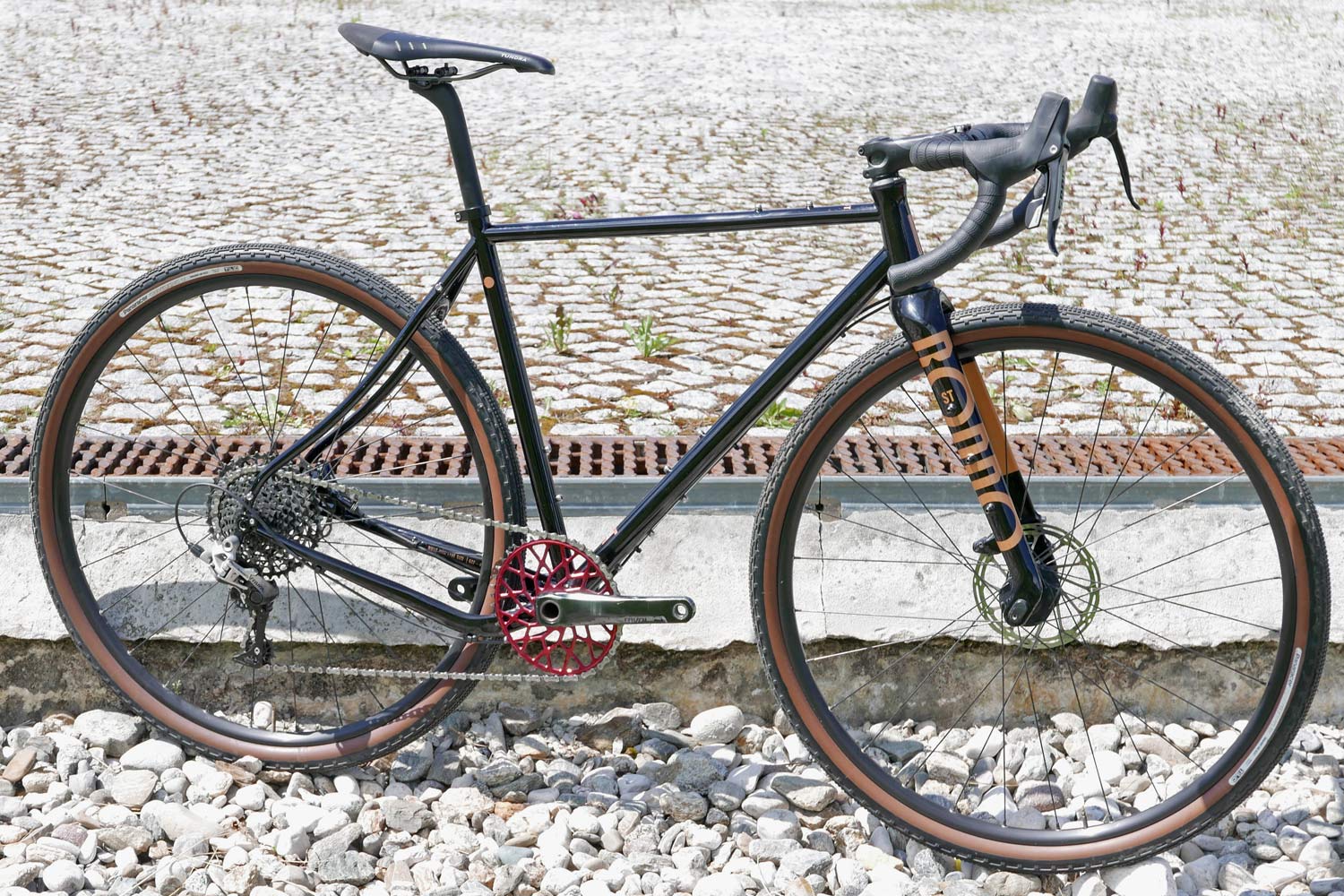 For the new year the popular steel version of the Ruut gravel bike gets a new frame version for more comfort in the higher spec. 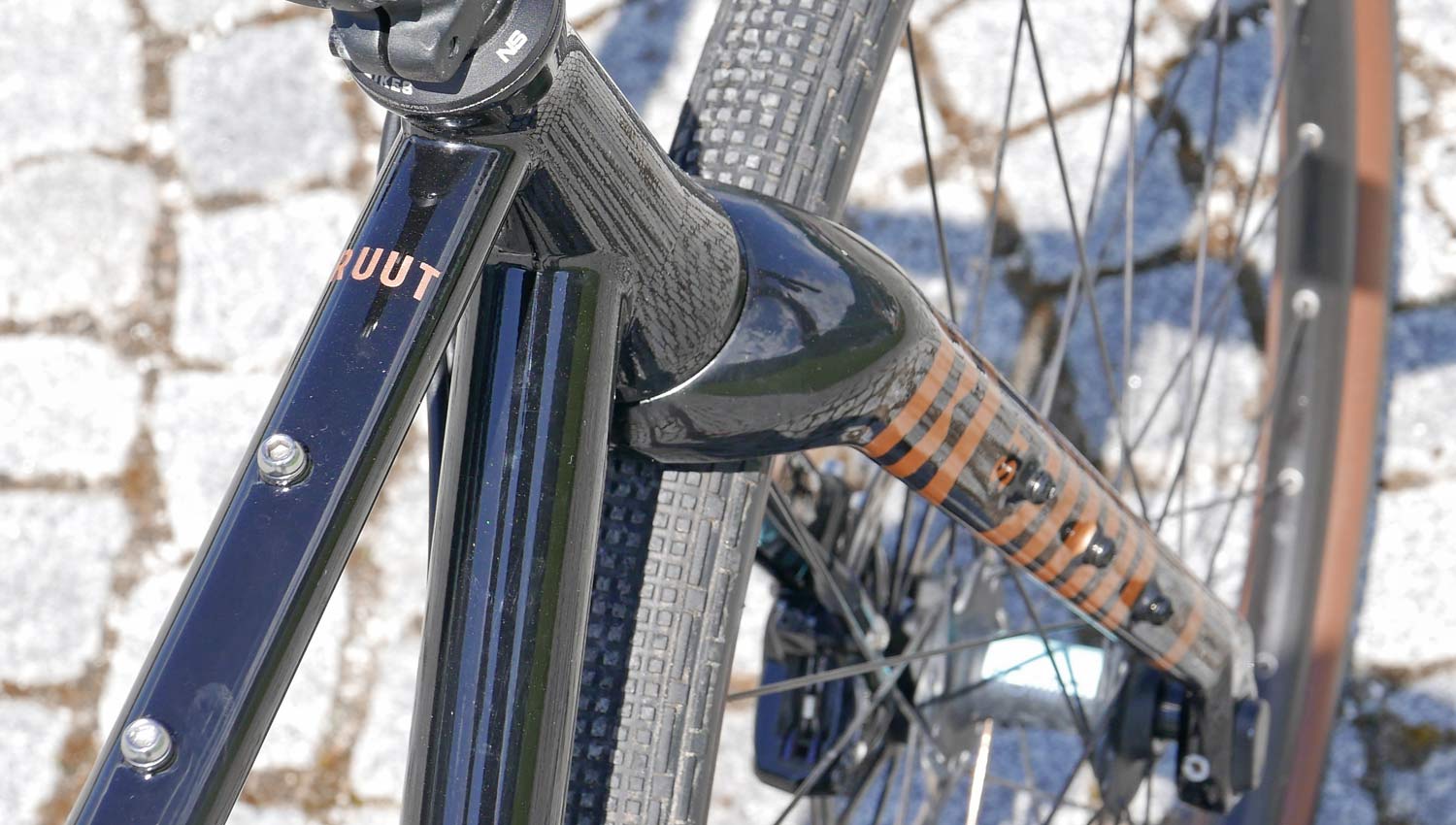 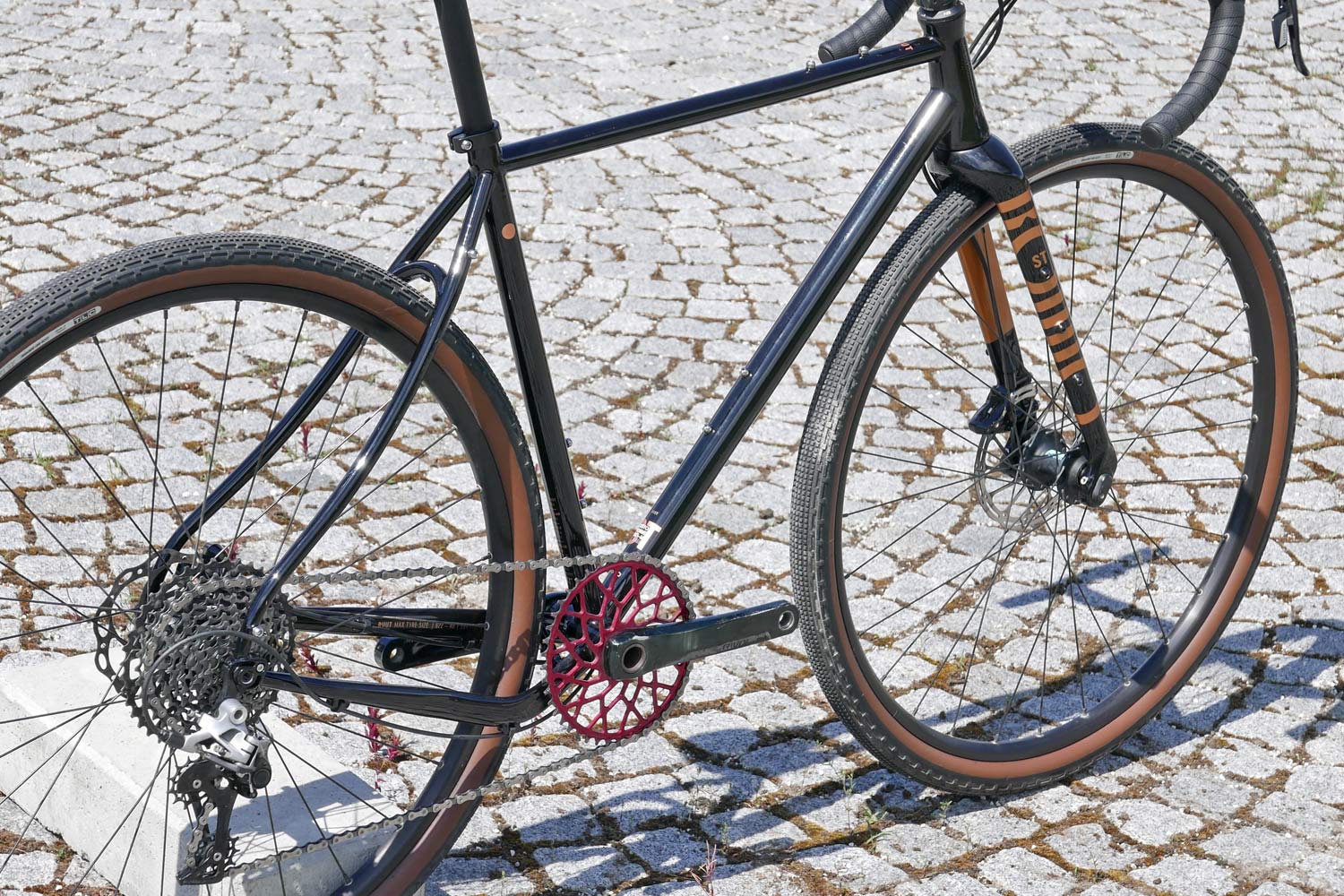 New curvy flex seatstays together with a more sloping toptube design allow for more seatpost flex and more rider comfort over bumpy terrain, as does a new horizontally ovalized toptube. The new version 2.0 Tange steel ST1 frame also adds an extra set of bottle cage mounts under the downtube and on top of the toptube. 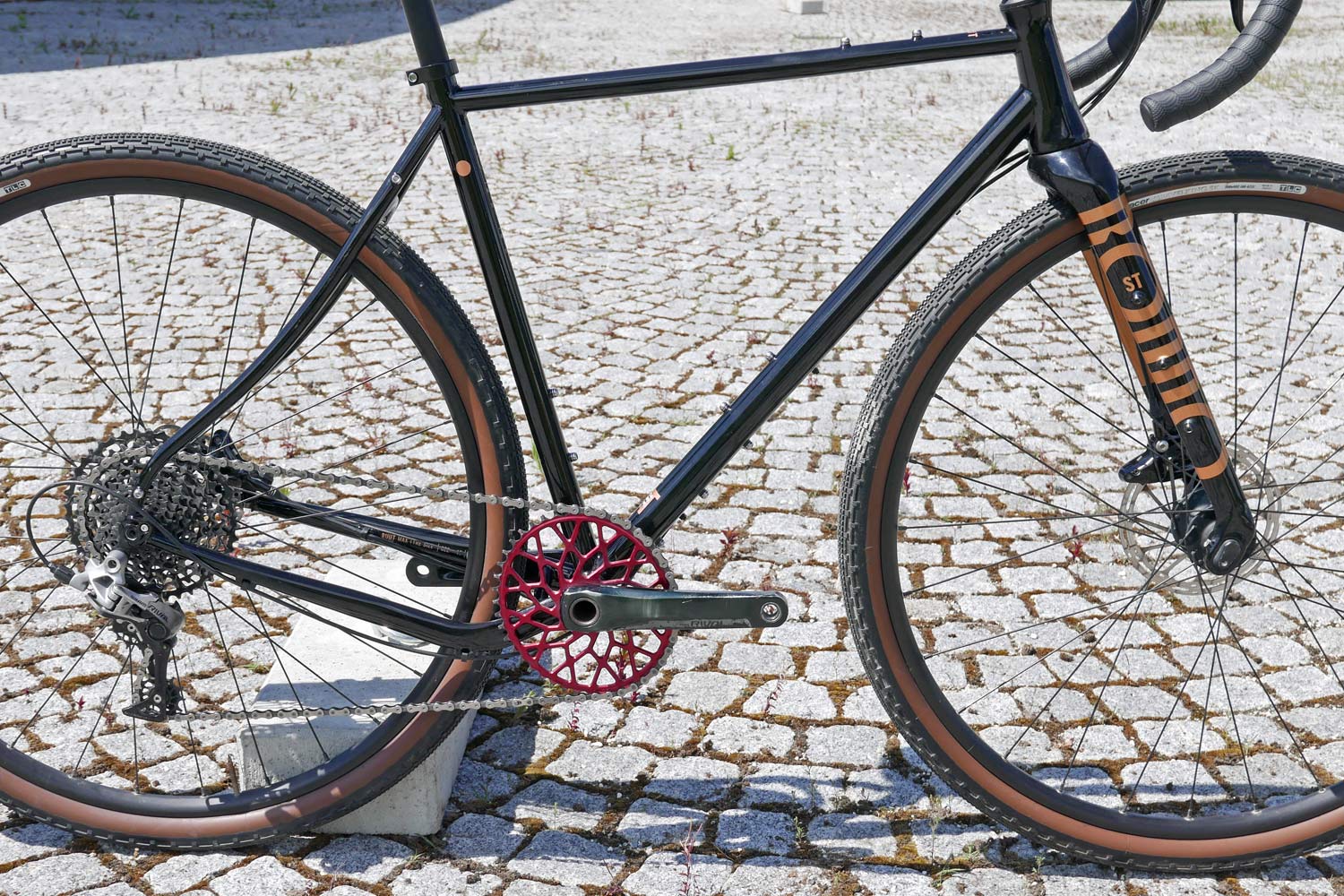 The 2020 steel Ruut ST1 gravel bike will sell for 2470€ in the same four frames sizes (S-XL) with a Rival 1x drivetrain with hydraulic disc brakes. 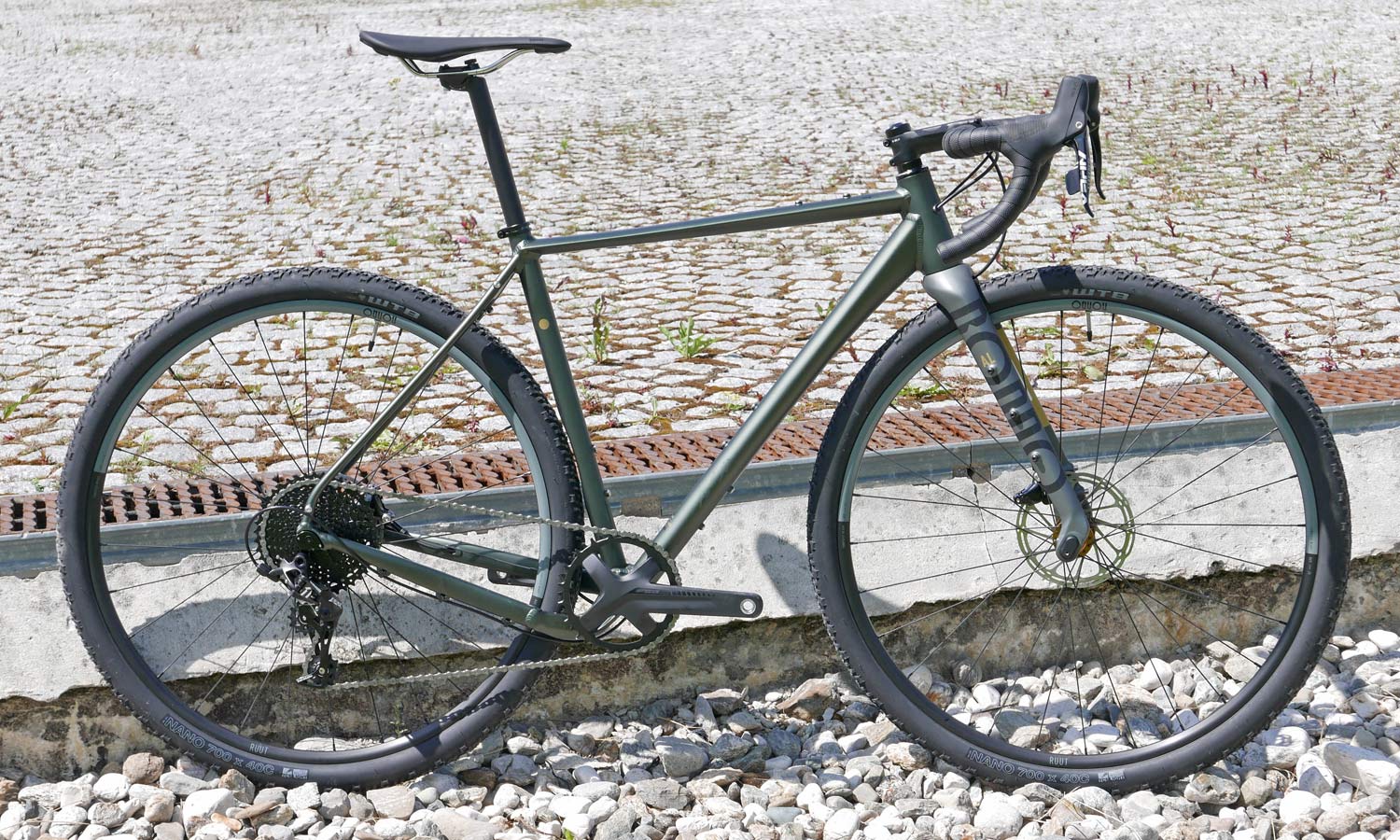 The aluminum Ruut AL1 generally gets the same upgrades as the steel bike, with just the top spec version getting a new frame & fork, while the 1650€ AL2 keeps the previous generation frame & more bulky carbon fork. 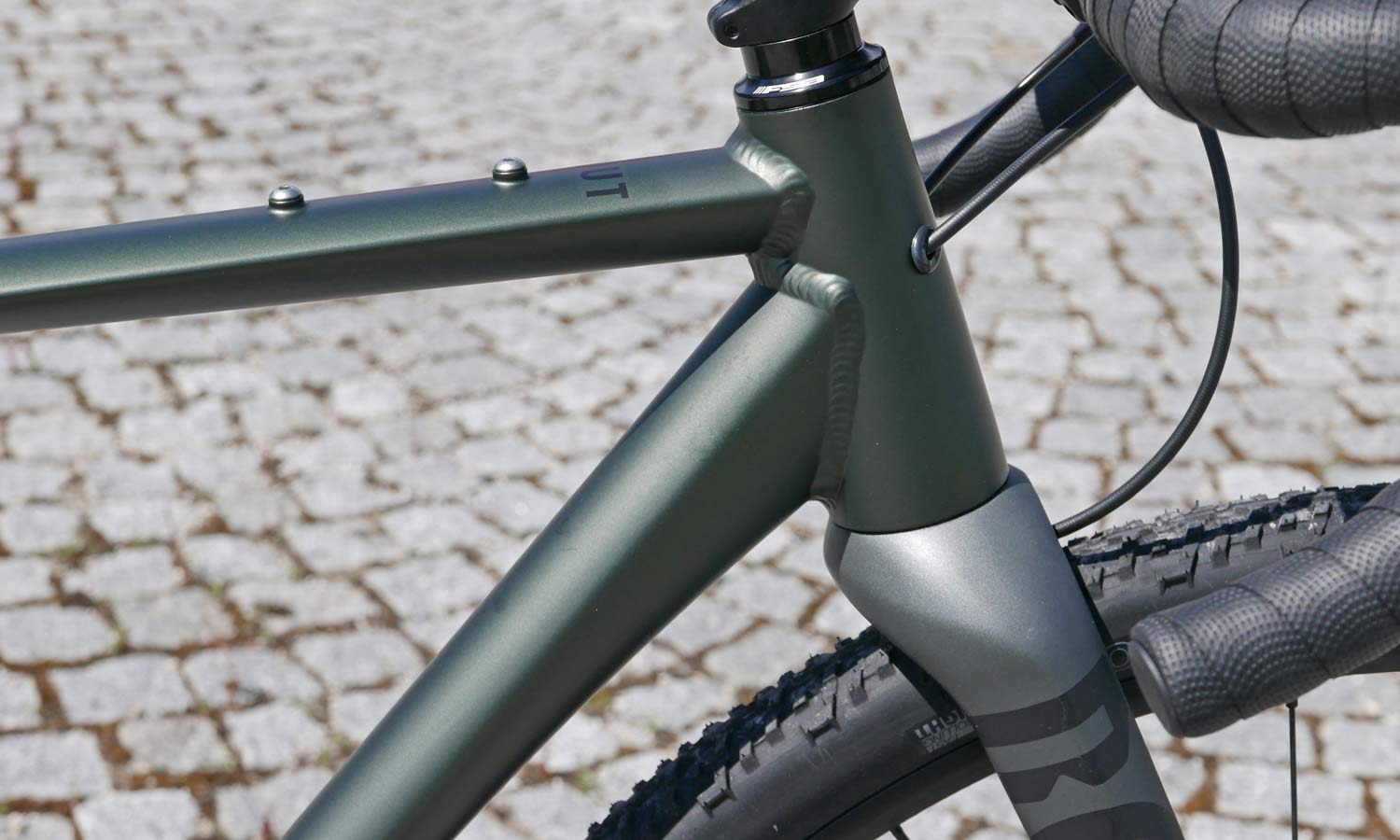 The 6061 alloy frame gets more dramatic hydro-formed tube shaping updates to maintain stiffness while improving rider comfort. (The production bike will include more typical internal routing through the downtube, rather than this headtube routed pre-production frame.) 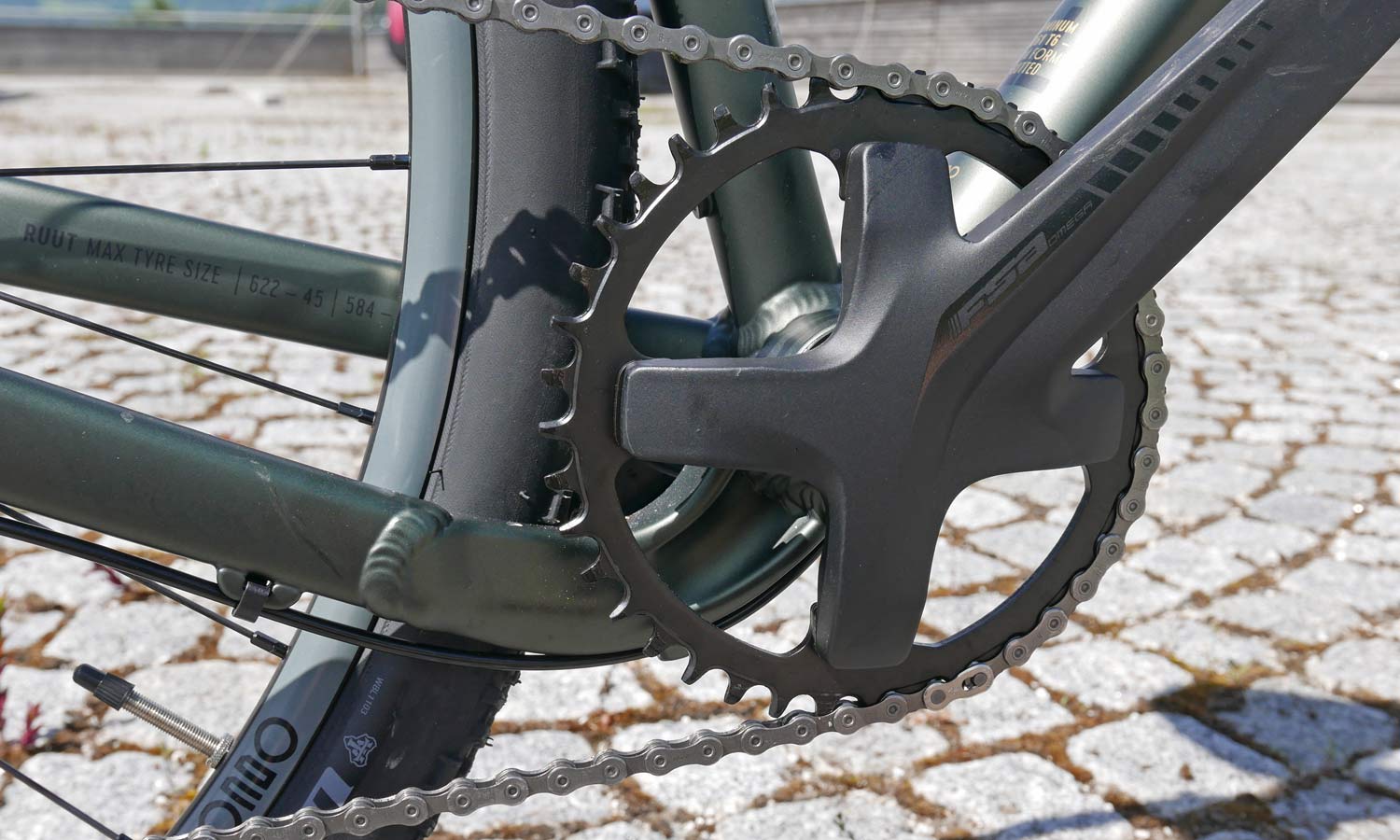 A large new dropped & forged chainstay yoke improves tire clearance at the critical bottom bracket area, allowing up to 700c x 50mm or even 29×2.0″ tire clearance on the new alloy bike to more closely match the extra fork clearance. That probably put clearance to 2.1″ for a 650b/27.5″ tire as well. 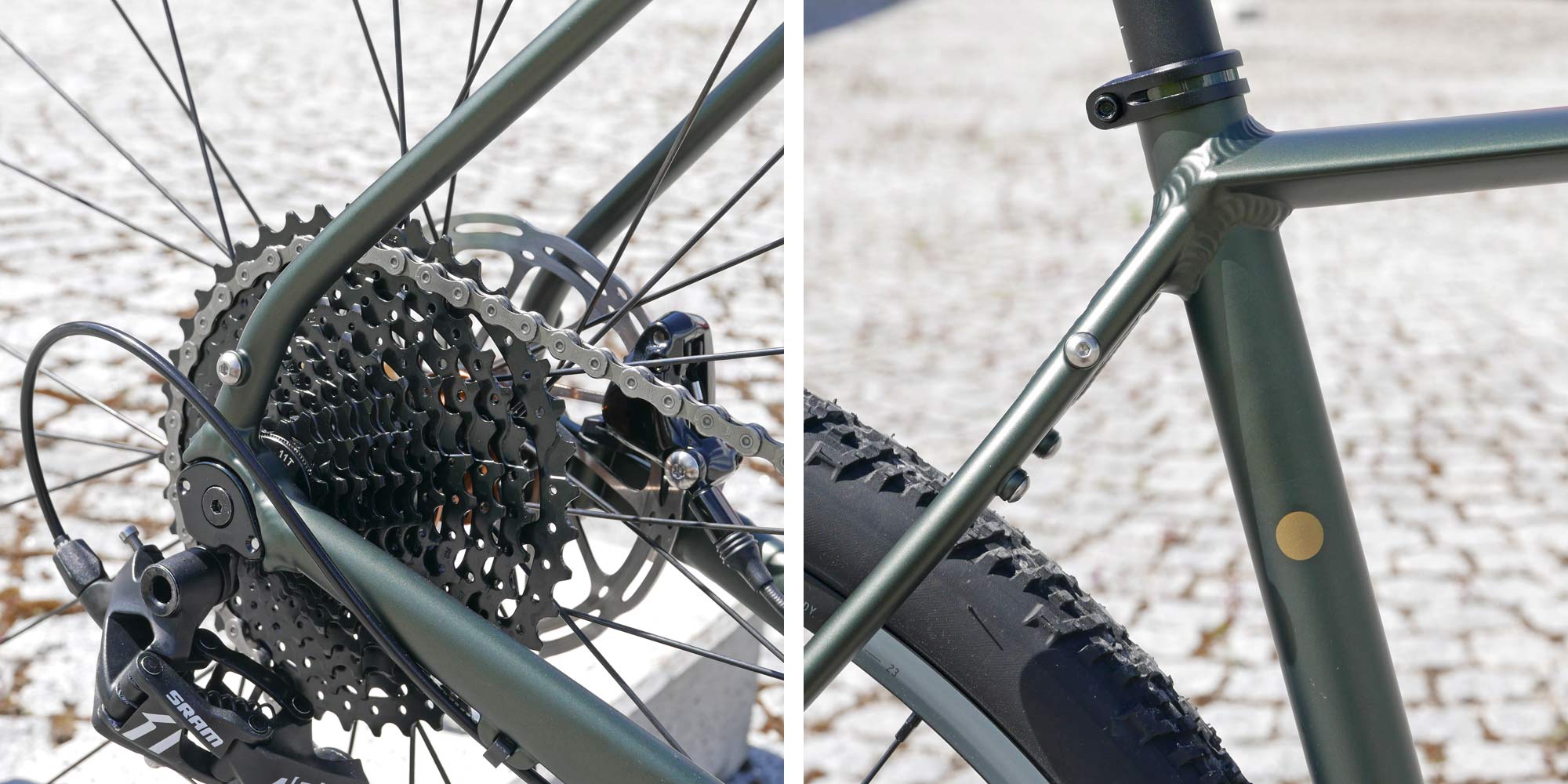 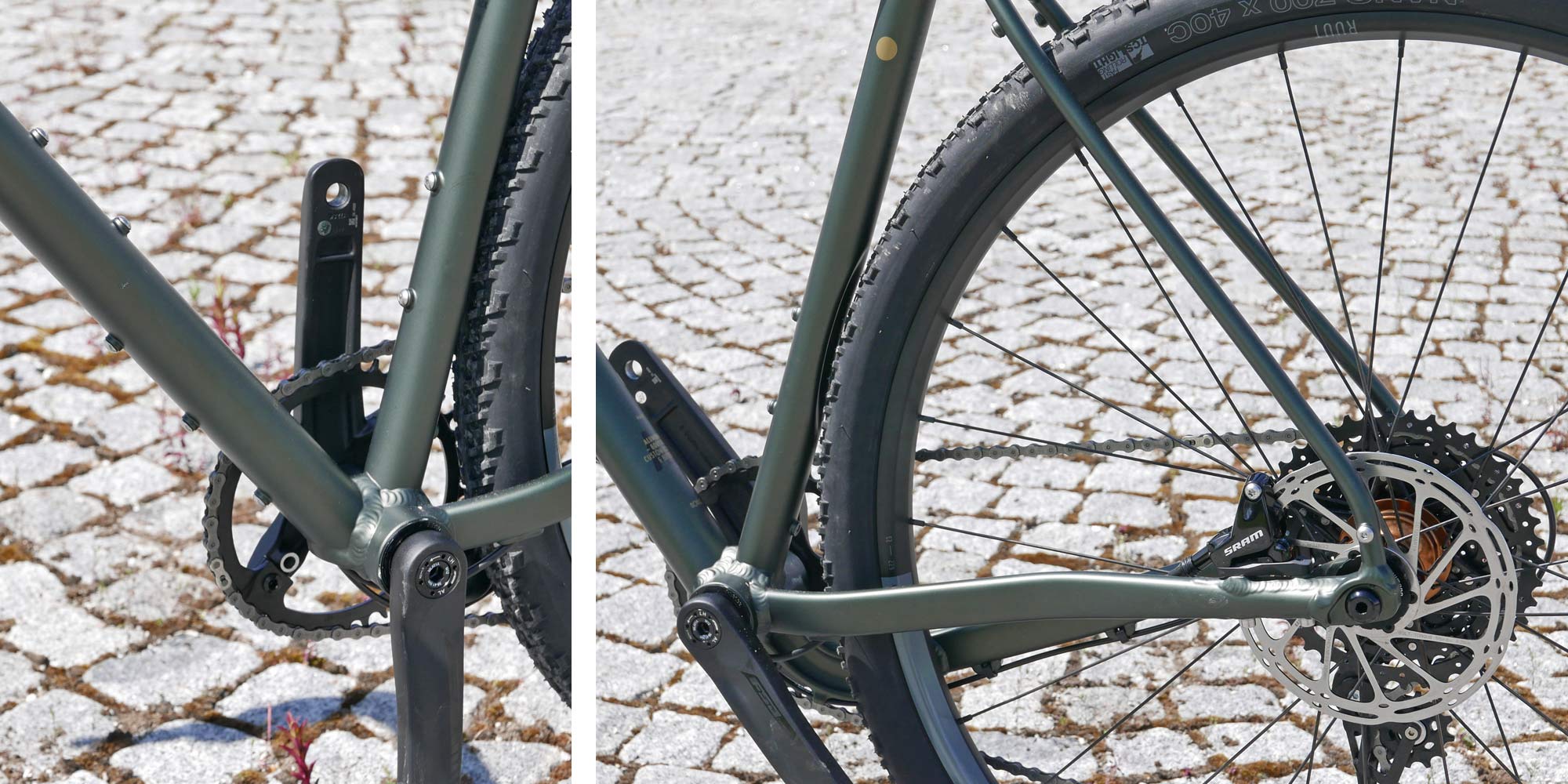 Plus, the new alloy bike switches to a reliable BB86 PressFit bottom bracket, and gets extra downtube & toptube cage mounts, plus full rack & fender mounts. The final frame will feature bridge-less seatstays, with a bolt-on arch to mount a fender if needed. 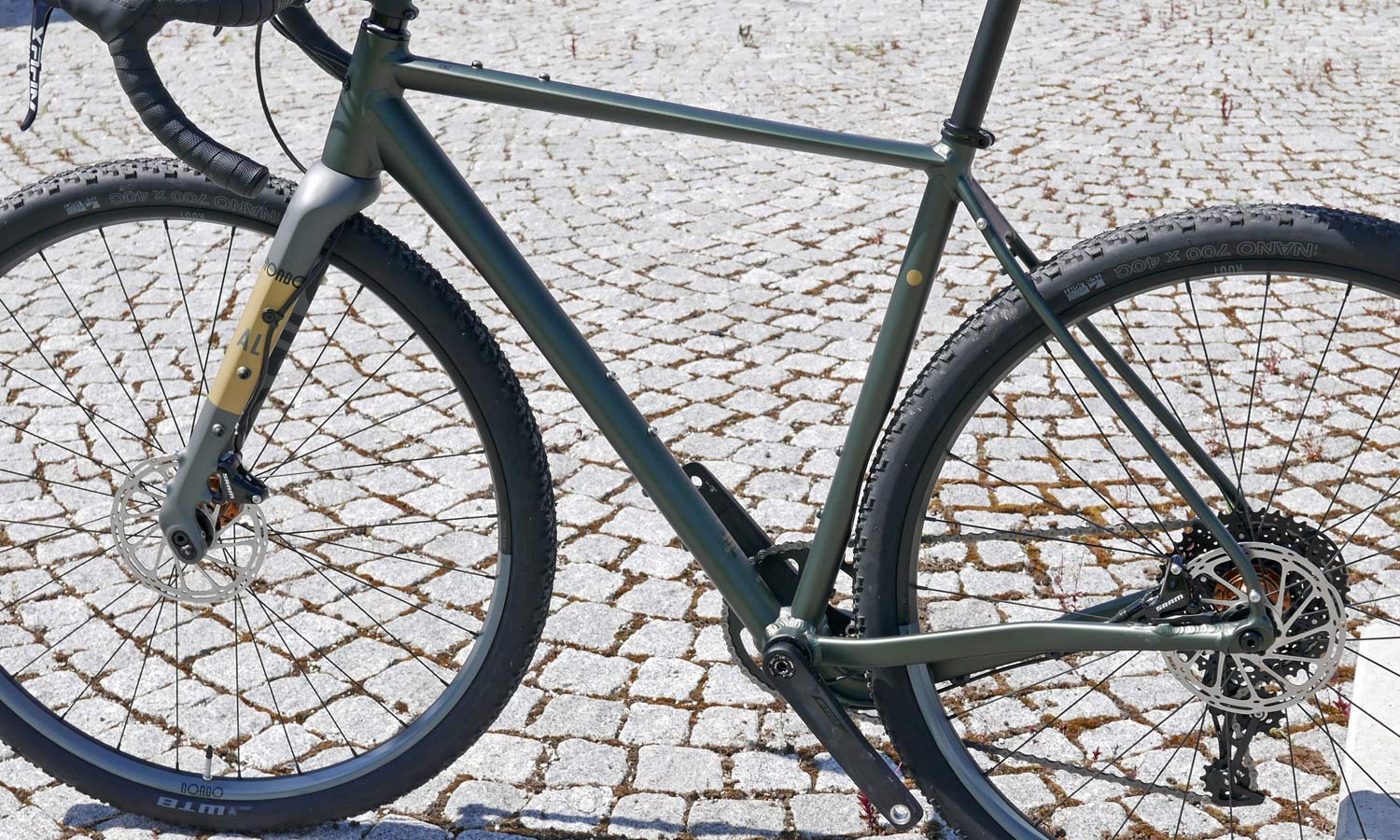 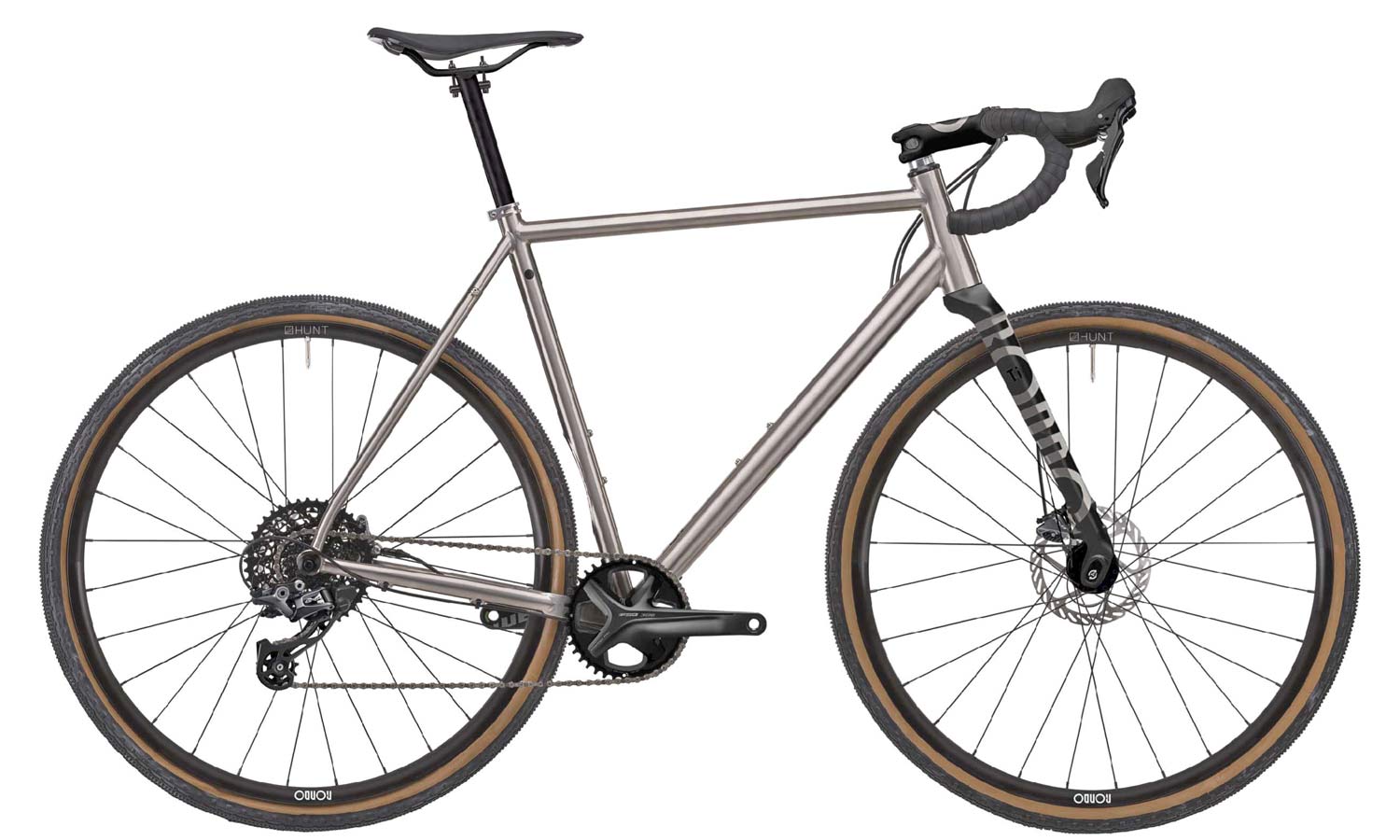 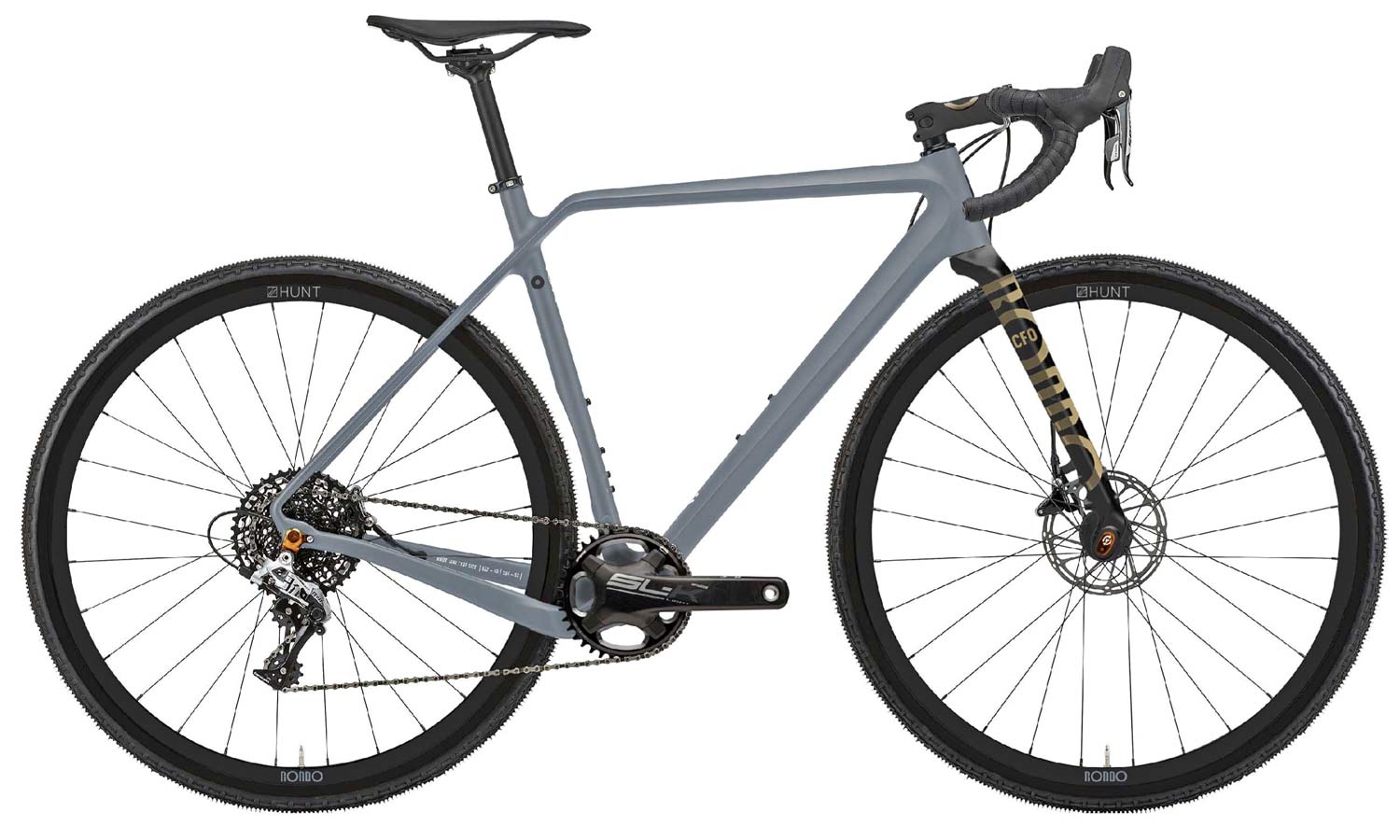 All of the carbon versions of the Ruut CF get updated with the updated TwinTip 2.0 fork as well. The carbon frames themselves appear to be only slightly changed to scrape out a bit more room for tires to what Rondo calls Halo Tire Clearance – up to 700c x 50mm or 29×2.0″ to match the new fork. The carbon frames are also said to add new full coverage fender mounts and a bento-style toptube bag mount, although we’ve yet to see them. The new 5400€ CF0 does get an upgraded spec with Hunt X Rondo 30 Carbon Gravel tubeless wheels, FSA SL-K Light carbon cranks & a carbon Easton EC70 AX bar to save weight – down to a claimed 7.8kg complete.

All of these updates are officially slated for model year 2020. While we have the expected pricing and much of the details, all of the frames & forks we have seen are pre-production items. Final production items are expected later this year, most likely mid-autumn 2019 for consumer availability before the end of the year.

Is there a flat bar version? Kind of digging this bike.

“Shimano GRX 1x 10-42T mechanical gravel groupset”
Do you know if it’s a sram/generic xd cassette or (be still my heart) an unreleased microspline Shimano cassette on the ti build? Looks like SRAM, but hard to tell from the pic.

The spec we’ve seen so far does indeed say a SRAM XG1175 11-speed cassette, paired to the RX812 derailleur.

Umm, is this one of the Things Bogans Like? (Look it up.)