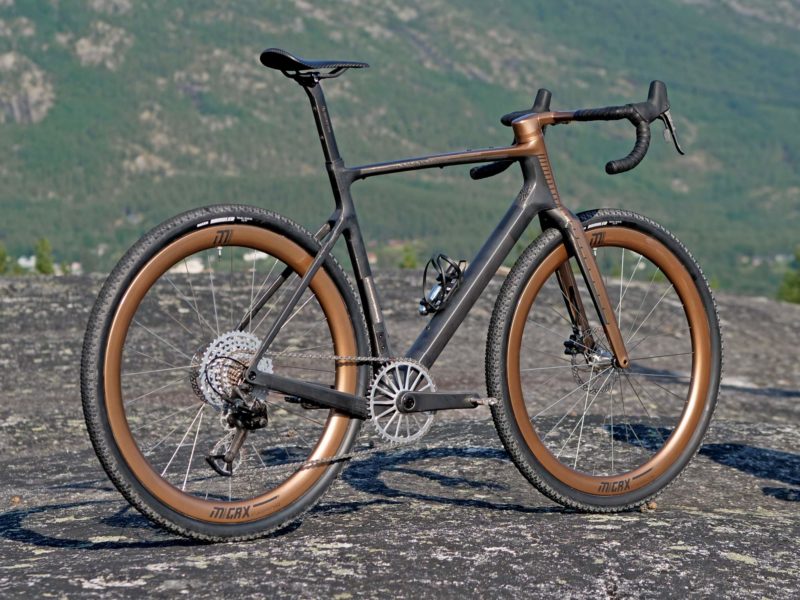 Every time we catch wind of a new Dangerholm project we can’t wait to see how crazy custom it will end up, and this latest Scott Addict Gravel project bike certainly doesn’t disappoint. To be fair Gustav Gullholm – the wild man behind the knife and short jorts – had a more integrated starting point working with the recently debuted Addict Gravel. But true to form, he was quick to break out the knives and start scraping away every extra gram of paint. And while this custom build was less “destructive” and “warranty-voiding” than most of his projects, there’s no shortage of beautiful details, unique solutions, and even a few prototypes tucked into the build…

It’s been less than two months since Gustav Dangerholm-ed his Scott Scale XC hardtail into a flat bar mountain biker’s gravel bike. But when Scott debuted their all-new Addict Gravel bike literally one day later, it was simply a matter of time until that new integrated aero carbon gravel got the real custom treatment, taking Scott’s idea of “Tuned” to new levels. 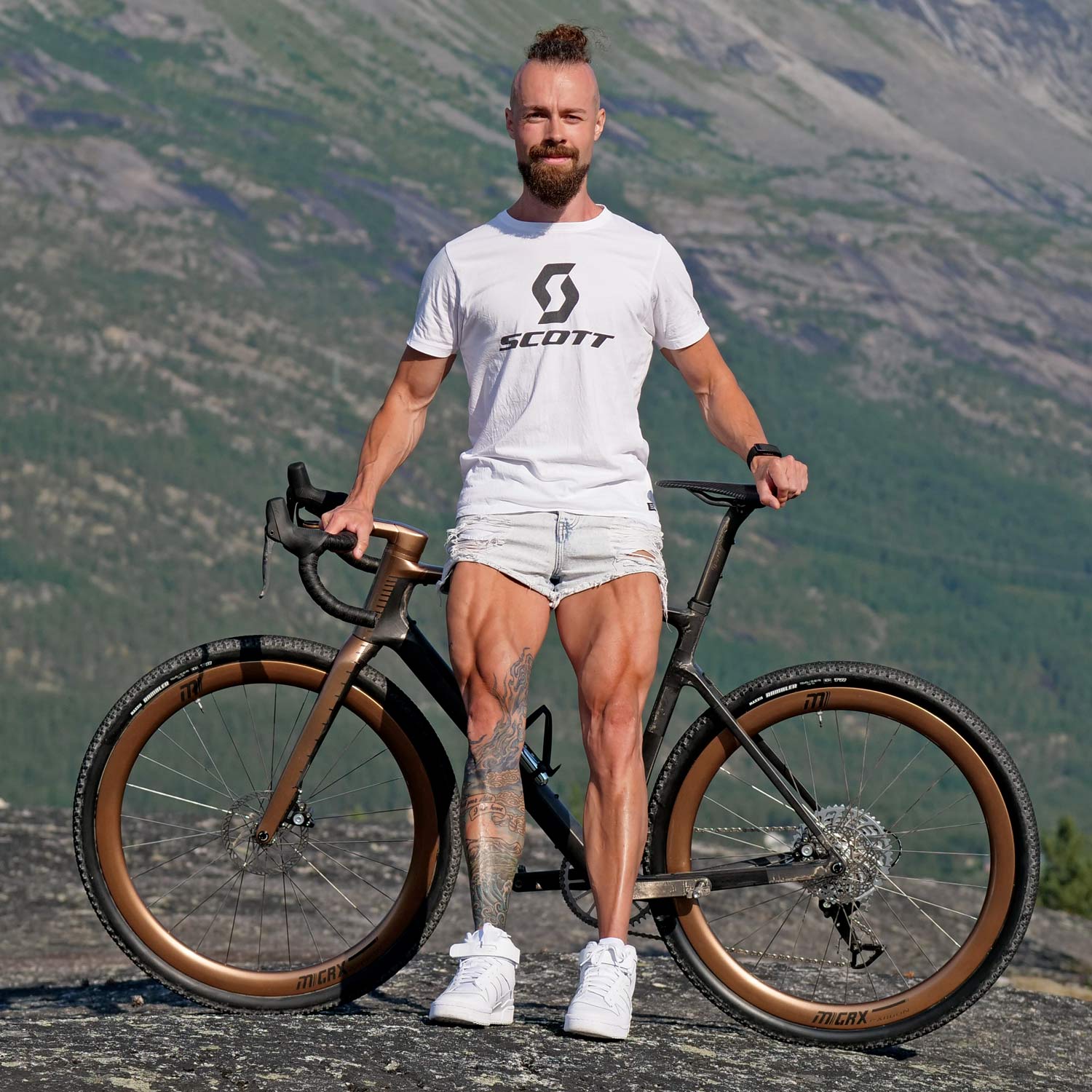 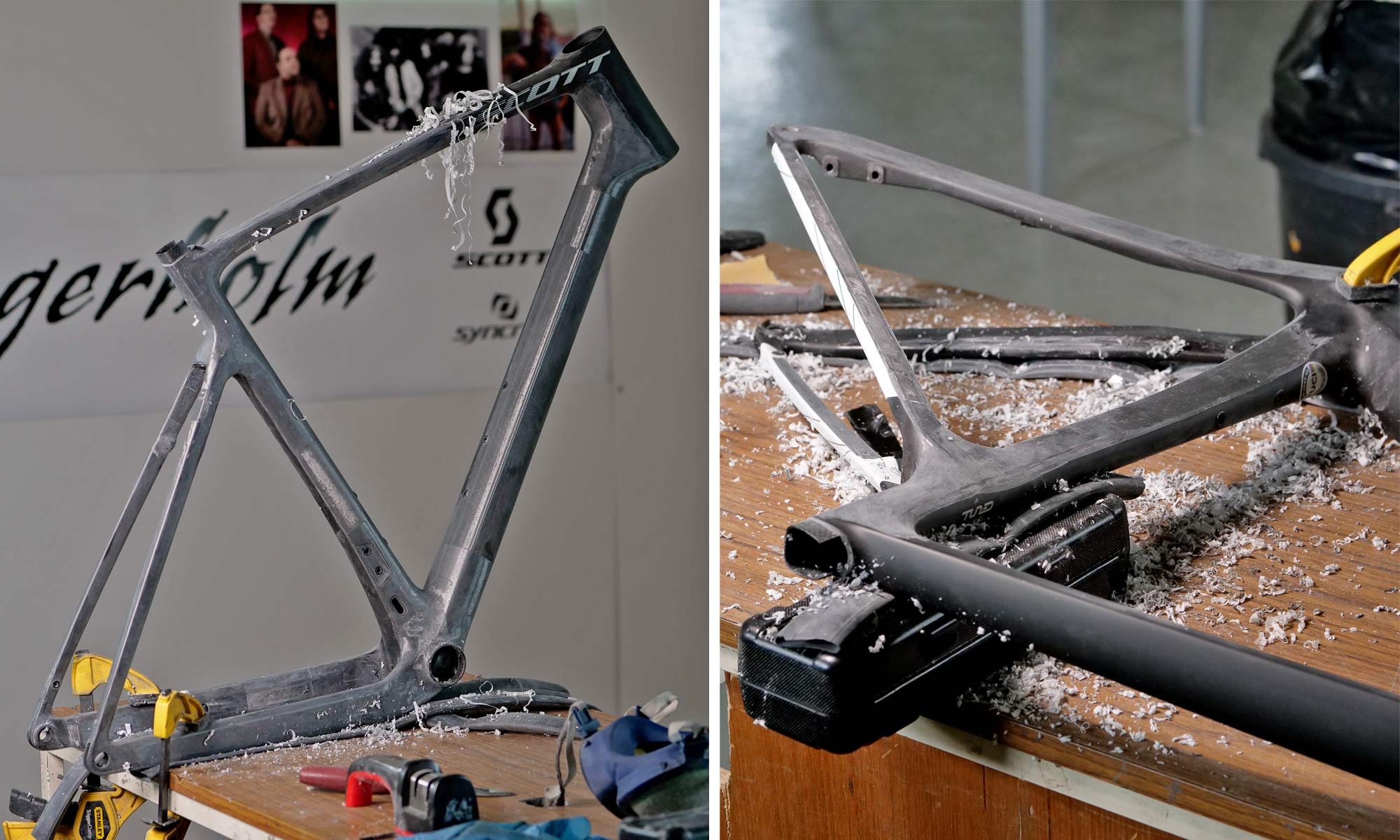 And while his projects often aim for lofty superlight “World’s Lightest” or “ultra-integrated” goals, he said this bike was already light & integrated when he started. So instead, this became a project about “looks, speed and sheer performance”. 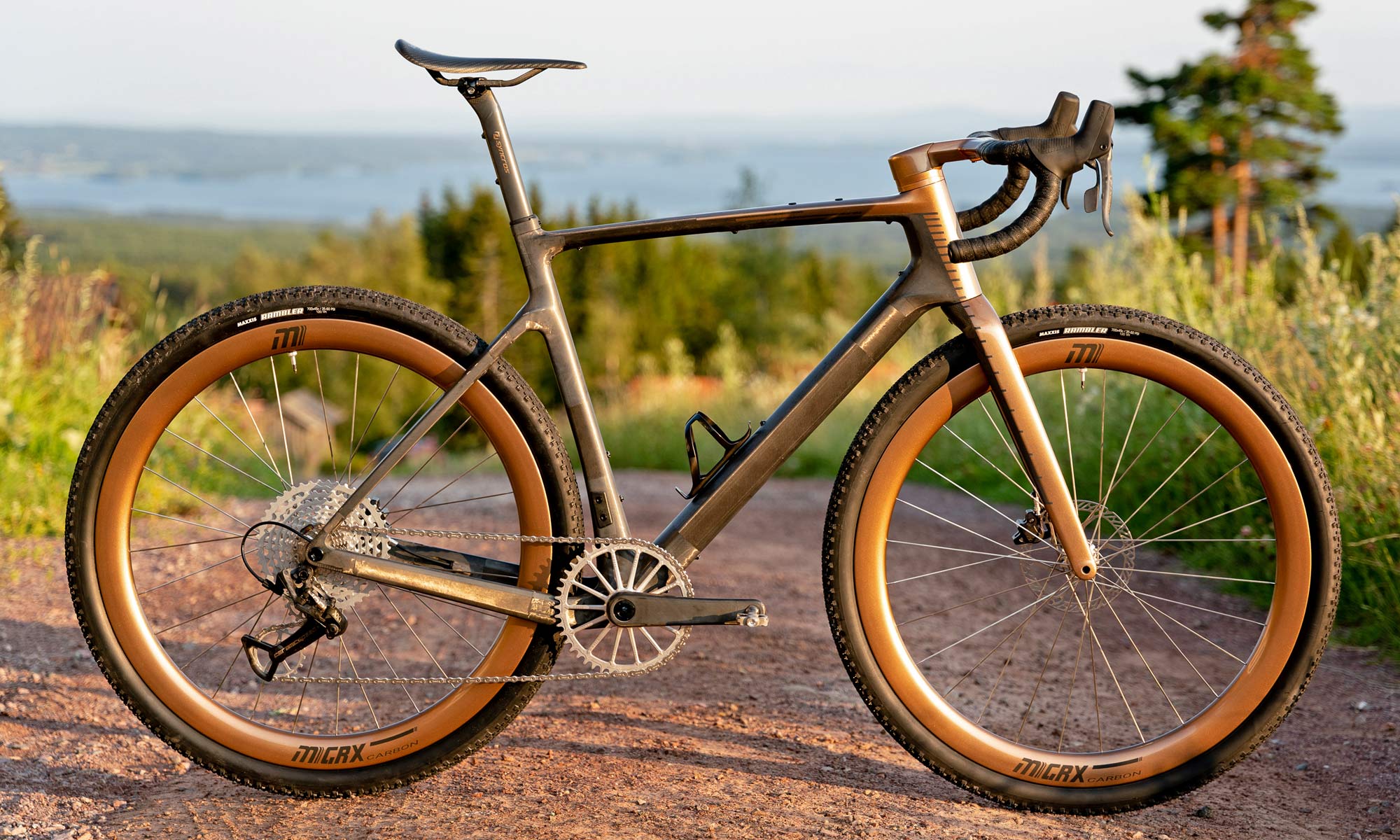 It’s still no heavyweight. At 7.13kg / 15.72lb complete including pedals, that’s a full 1kg lighter than Scott’s lightest 8700€ complete Tuned build without pedals. Just don’t ask how much the Dangerholm edition would cost you! Your bank account doesn’t even want to know. 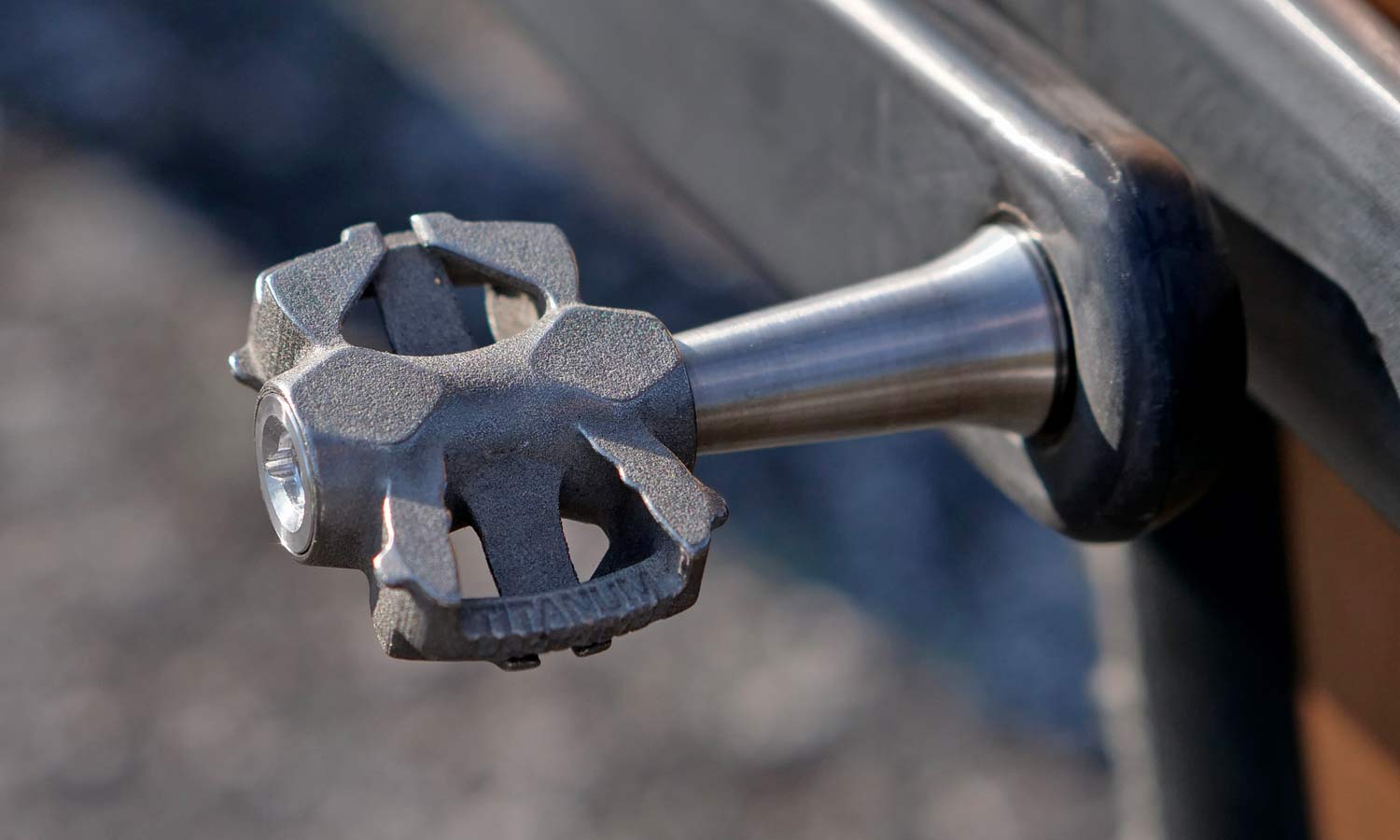 Looking at the rarest of the rare details on the Scott Addict Gravel Dangerholm edition, a couple of lightweight prototypes pop out. Those 3D-printed titanium Titanum MyTi Ultra clipless mountain bike pedals certainly stand out. 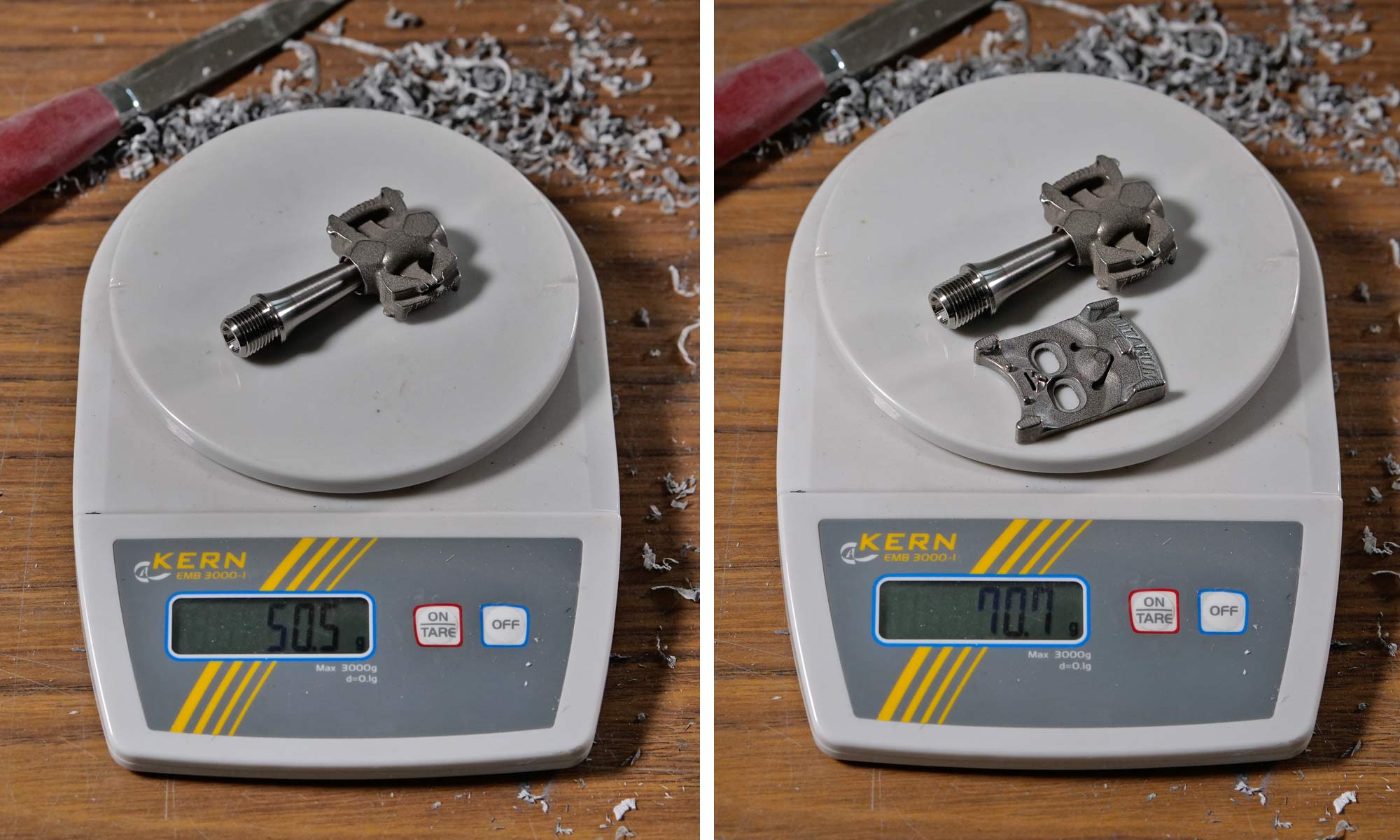 Weighing just 101g for the pair on Dangerholm’s trusty scale and only 40g more for their pair of 2-bolt ti cleats, we believe what Titanum told us last March when they went to Kickstarter calling them the “lightest ever for any discipline”. While these are technically still prototypes, after their successful crowdfunding campaign this year, consumer availability looks likely to be ‘coming soon’. 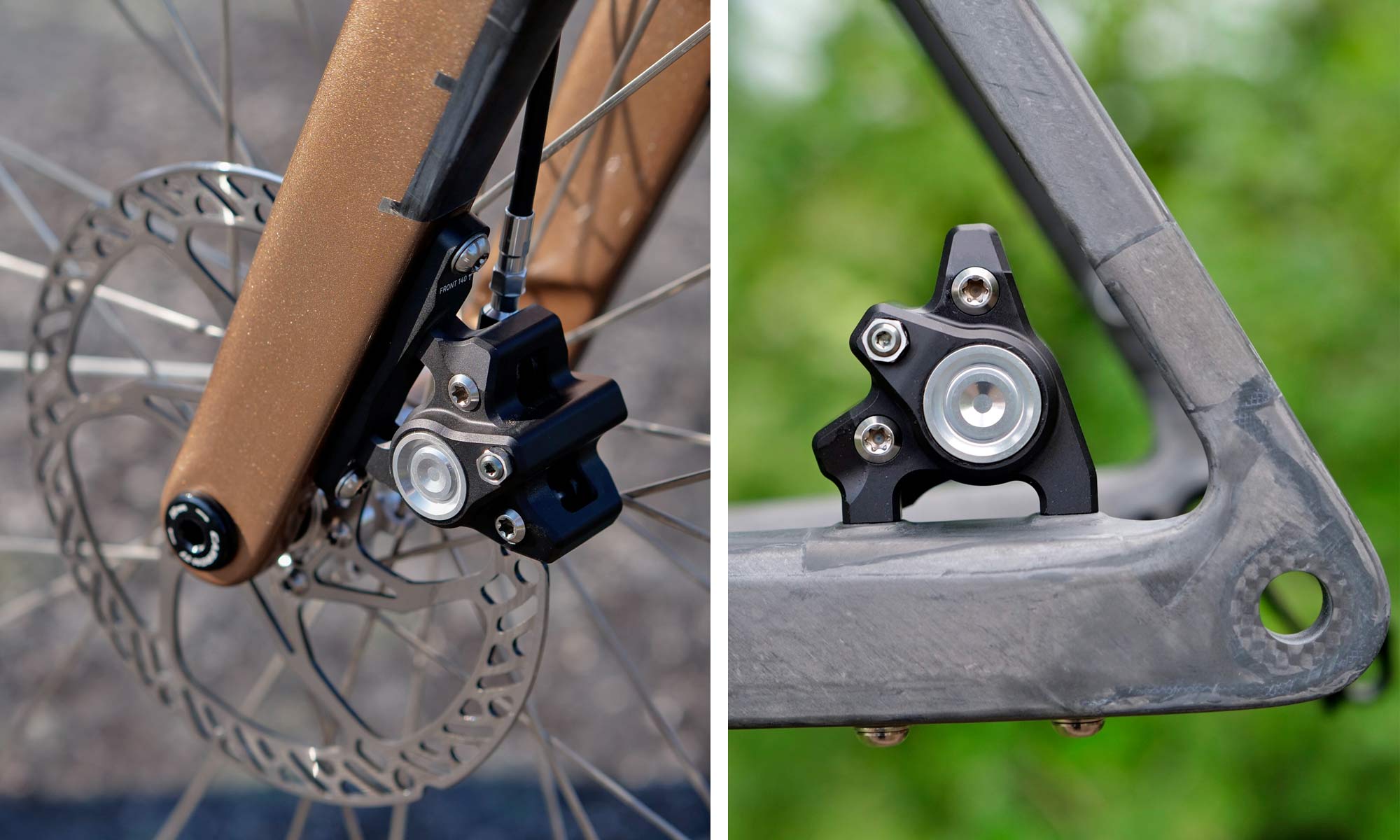 Another set of suitably drool-worthy prototypes are the new set of Trickstuff Strada flat mount brake calipers with new titanium-back brake pads… because why not, right? Beyond just being pretty & shiny, the revised two-piston calipers are designed with larger pad openings for improved pad clearance with these Trickstuff Dachle or other rotors, and are available to work with either Shimano or SRAM levers. Want to see the Shimano C22 version? Check out our Eurobike coverage of Trickstuff brake updates. 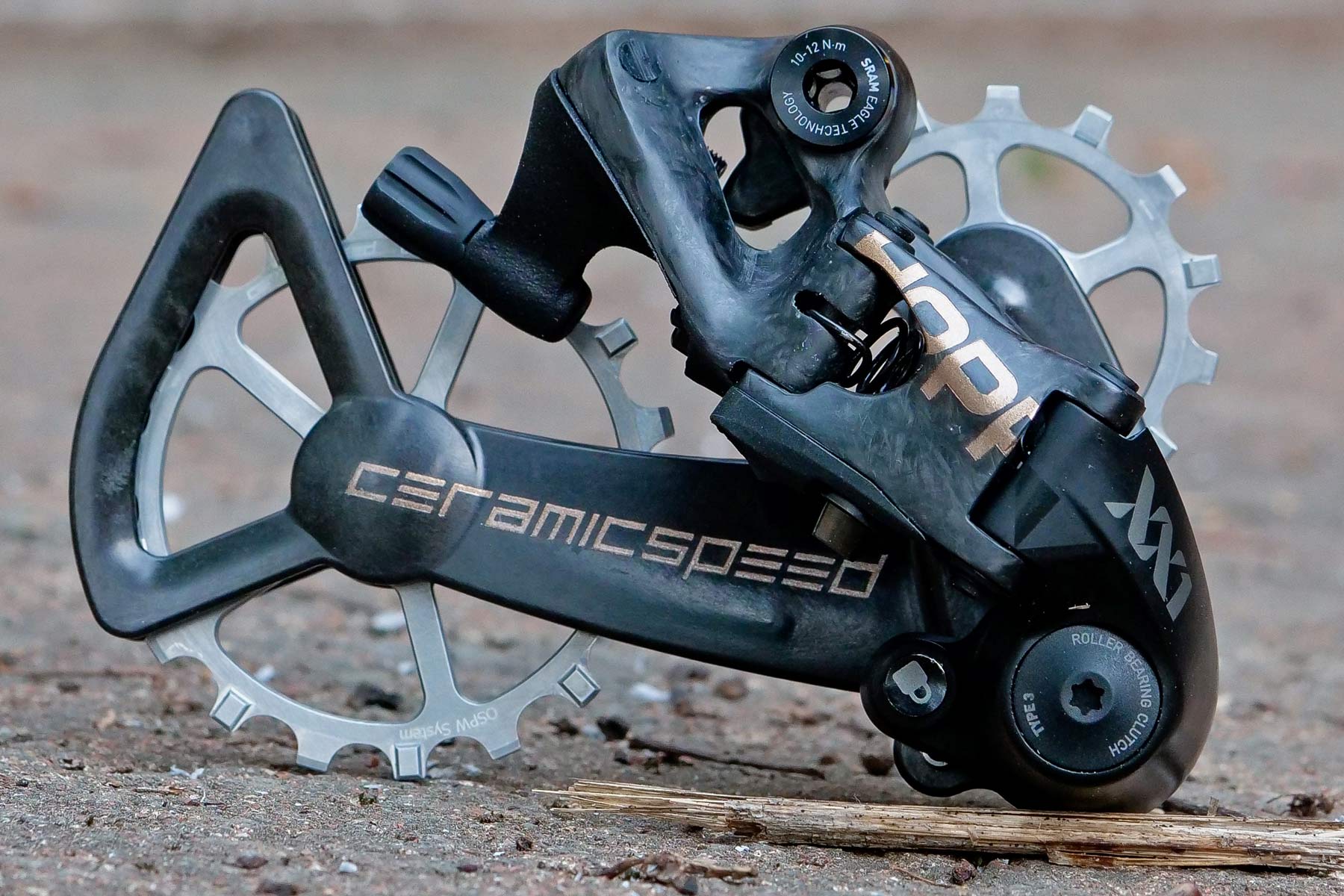 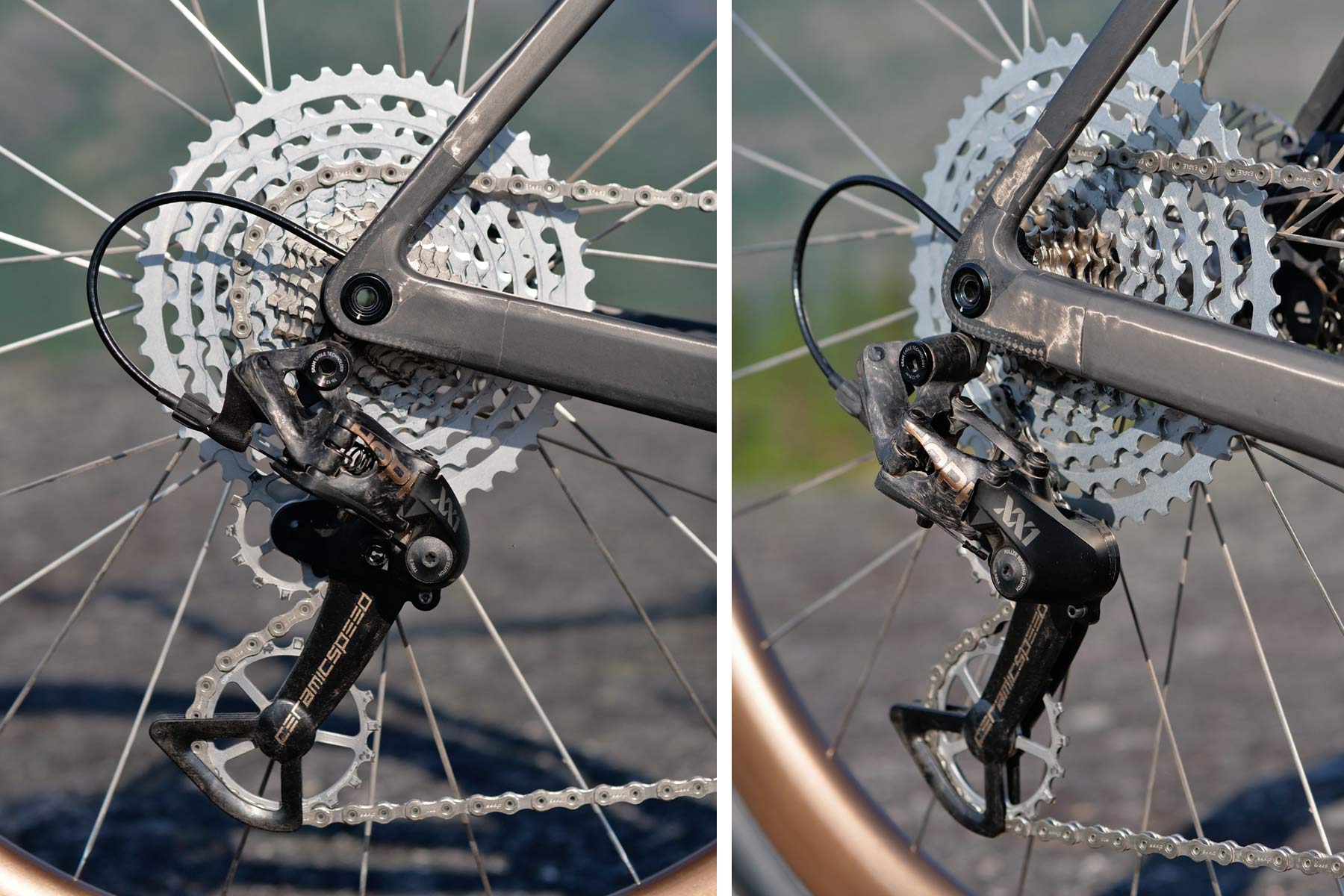 The result is not much original left of the SRAM mech outside of the P-link and clutch. 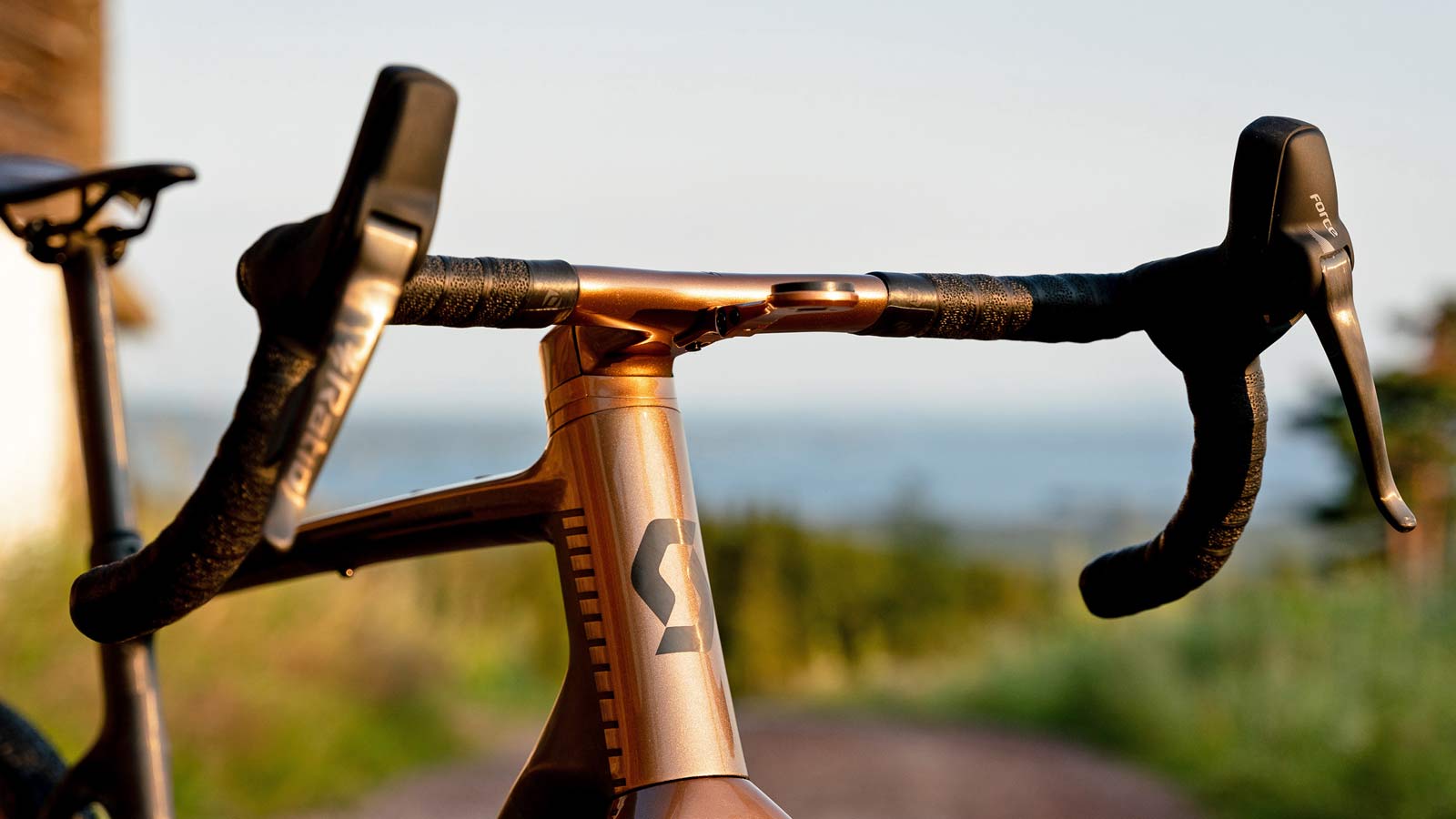 Interestingly, Dangerholm opted for the weight savings and simplicity of a SRAM mechanical shift drivetrain. 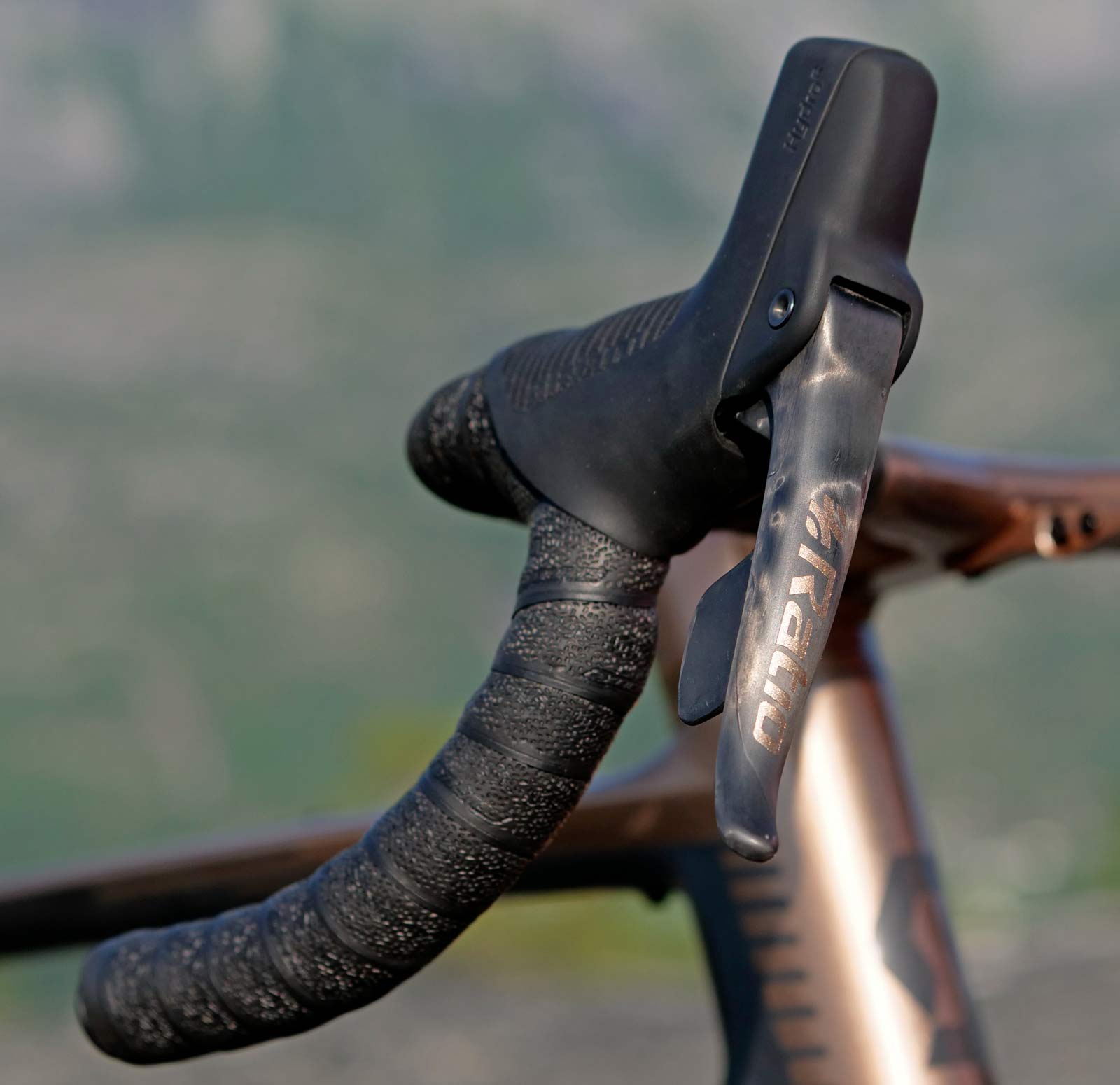 But to get the wide gearing he wanted, it was time to get creative. Up front, a SRAM Force 1x left lever joins a mechanical shift Red right lever, converted from 11-speed road to 12-speed mountain indexing thanks to the Ratio upgrade inside. That let Gustav opt for a 1×12 drivetrain with a 46 x 10-46T gear spread. 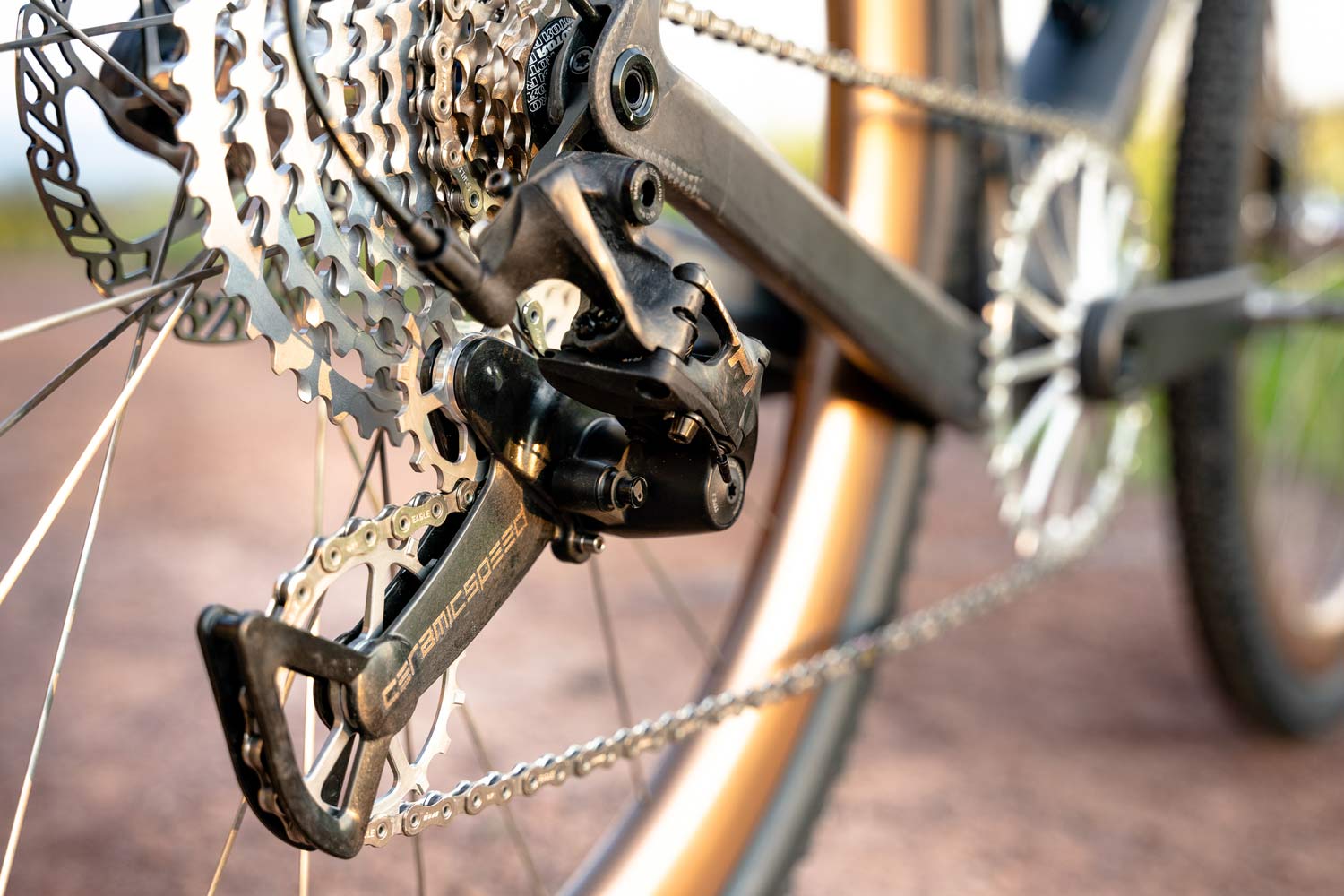 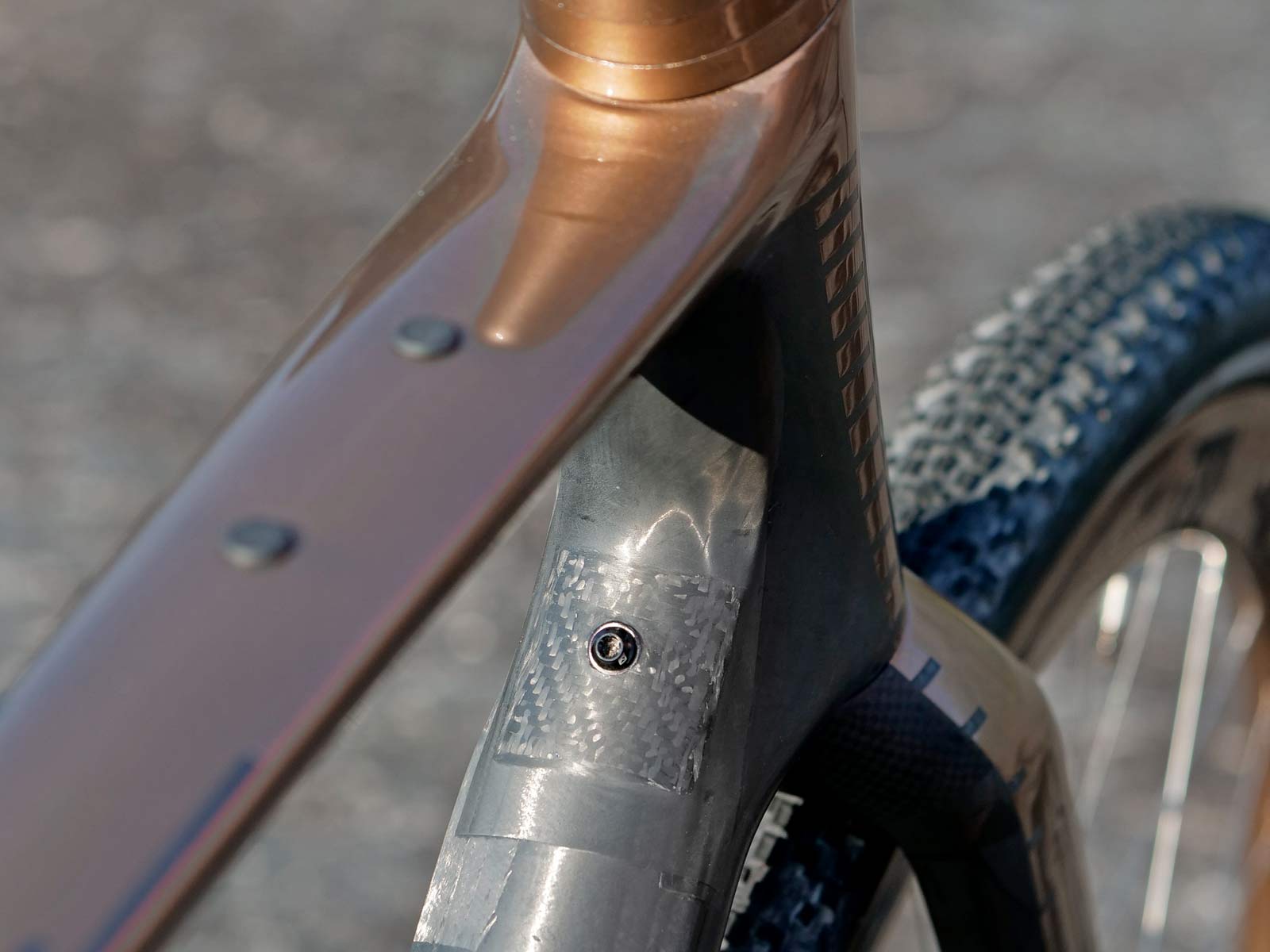 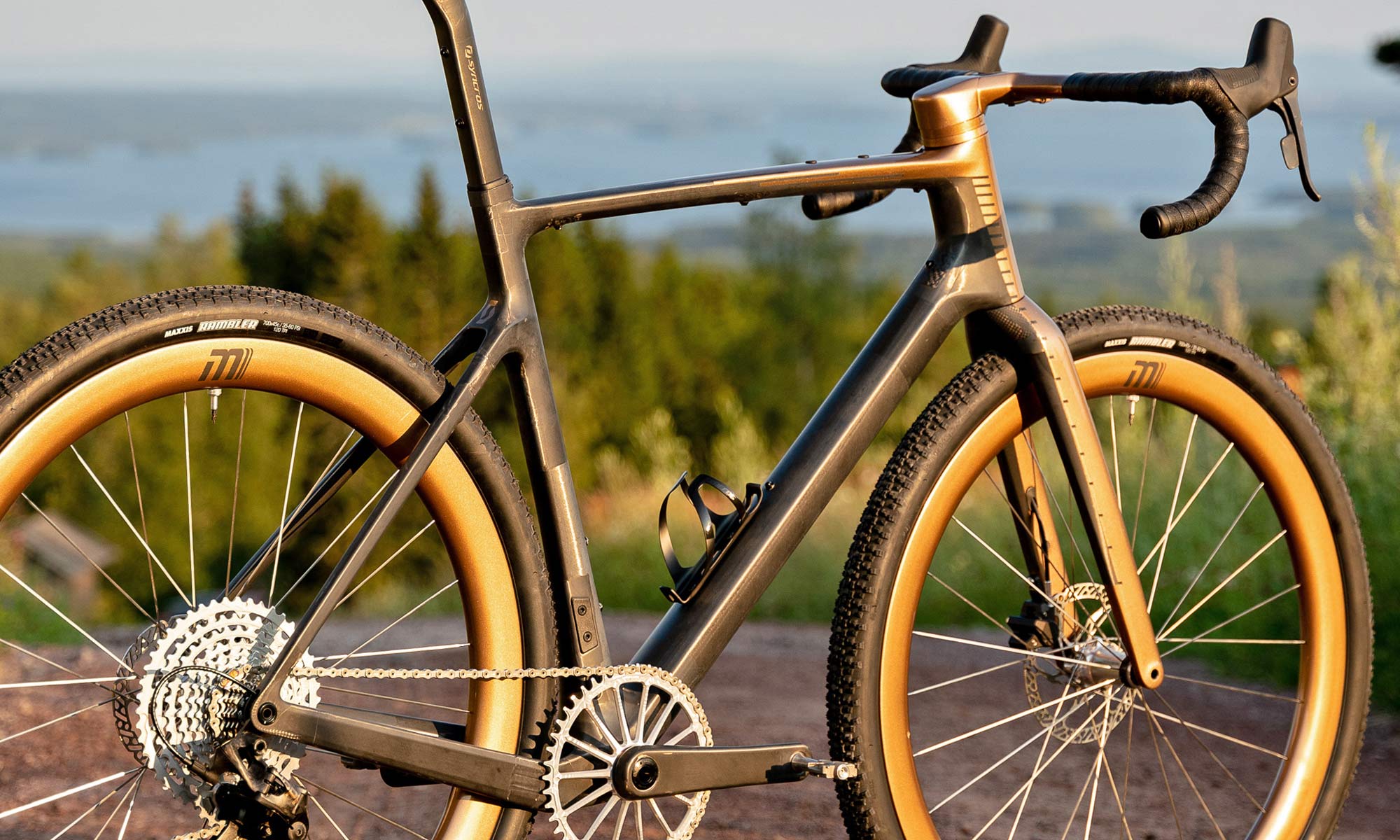 The Addict Gravel Tuned fork appears to have escaped unscathed. Both frame & fork do get light alloy Carbon-Ti thru-axle upgrades, though. 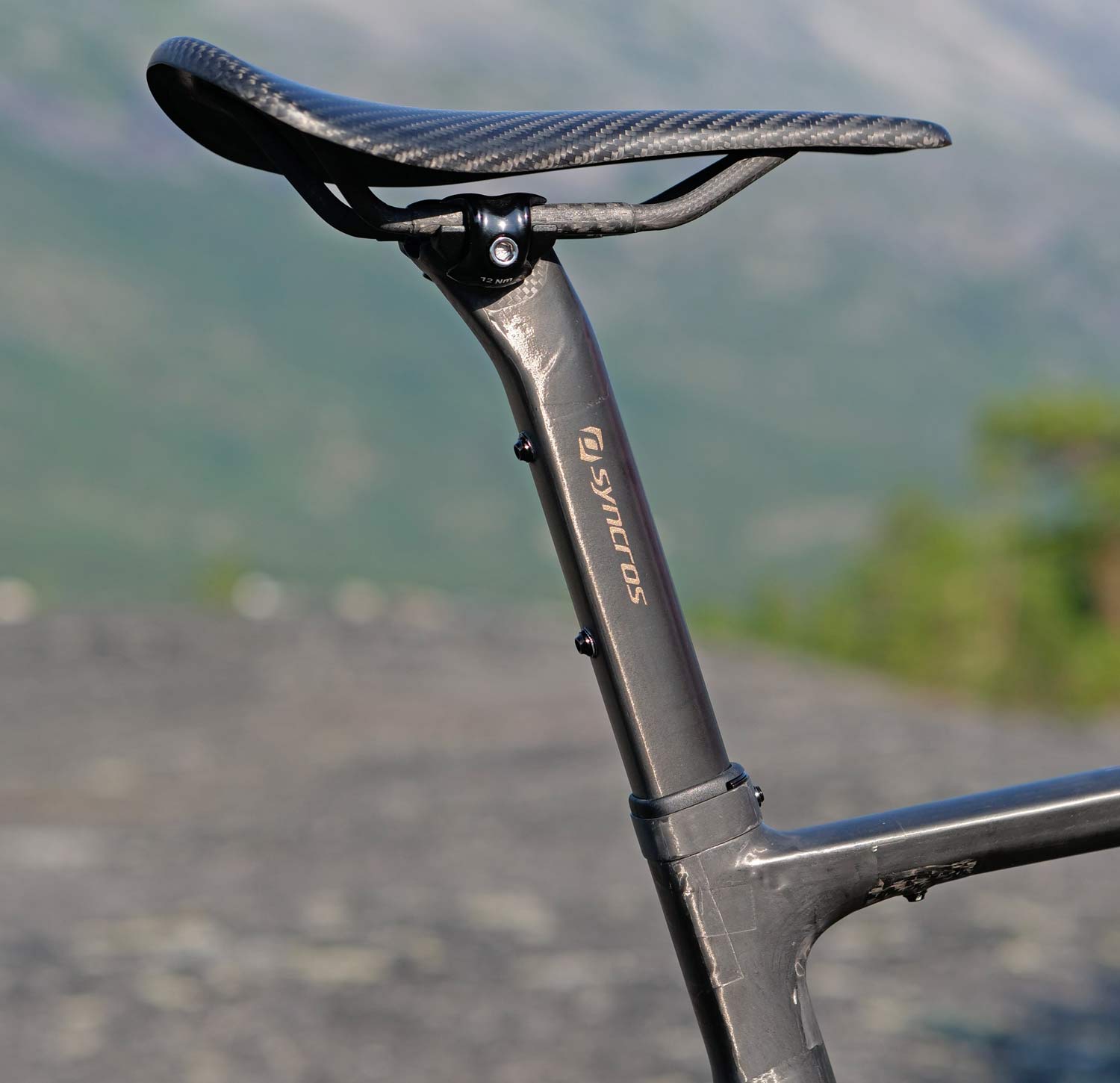 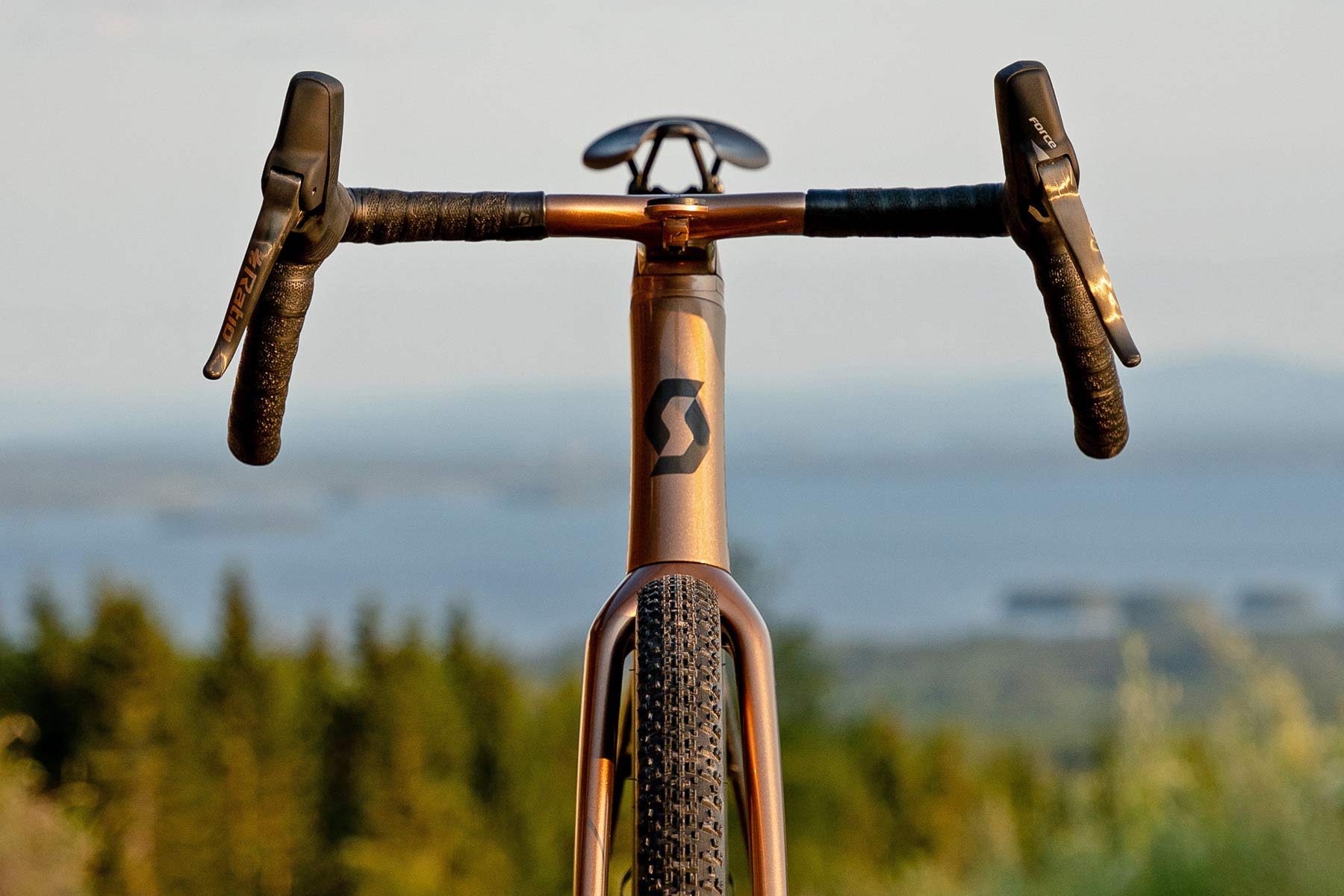 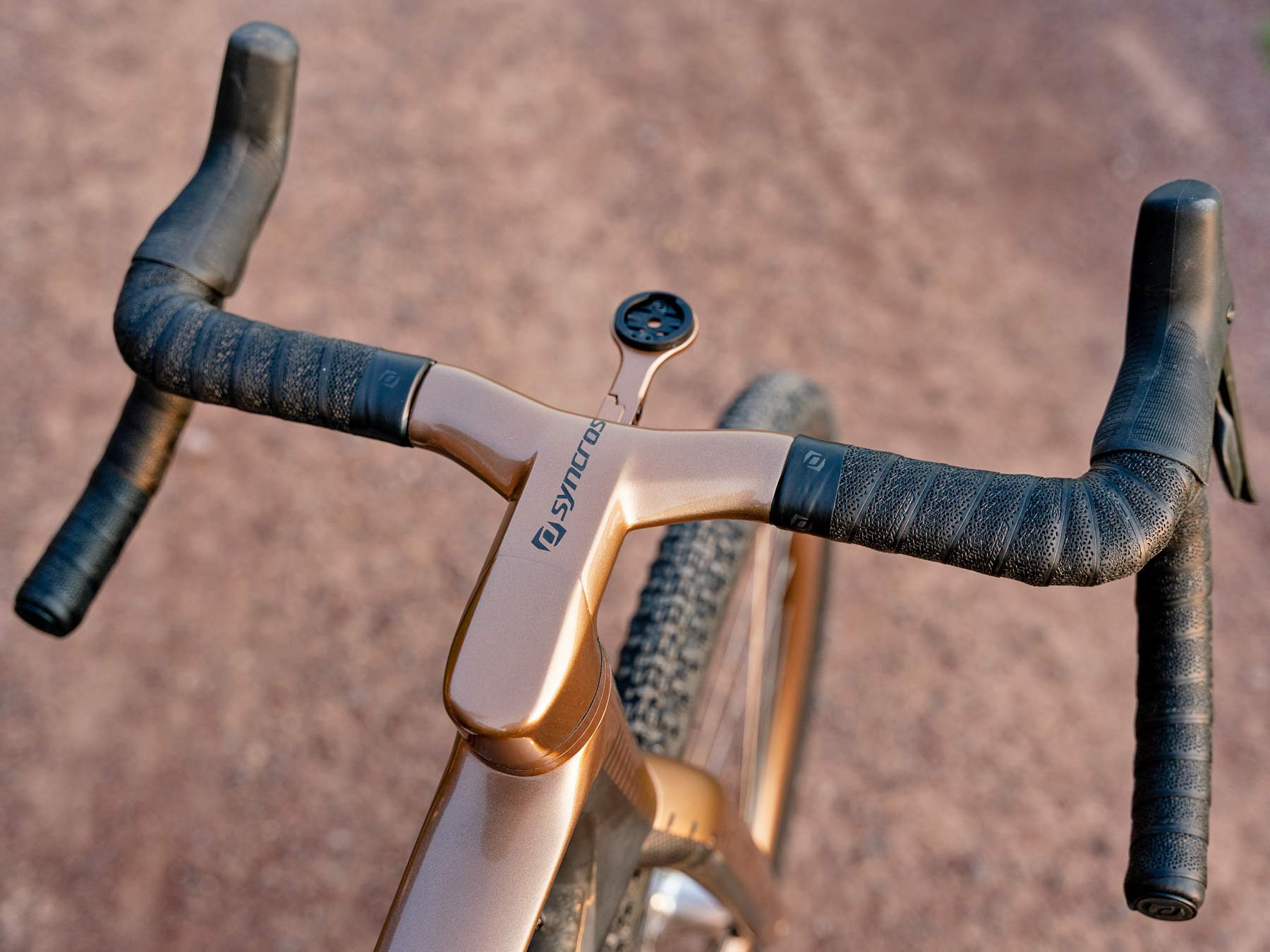 It uses the standard Acros for Syncros headset, but sheds a gram or two with an Italian Extralite expander inside. 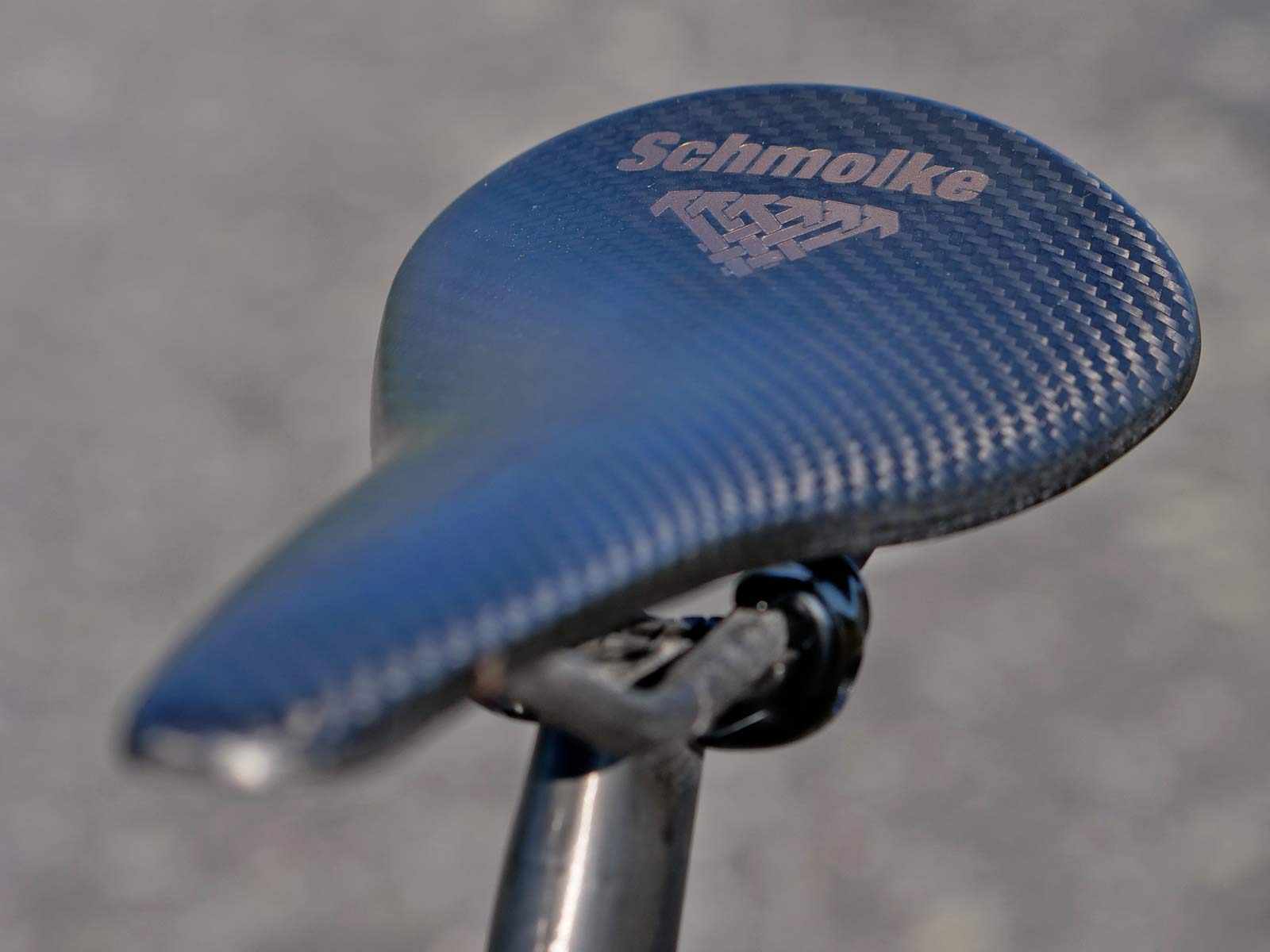 Back into the rare lightweight components is the Schmolke SL79 carbon saddle that Gustav swears is comfortable. 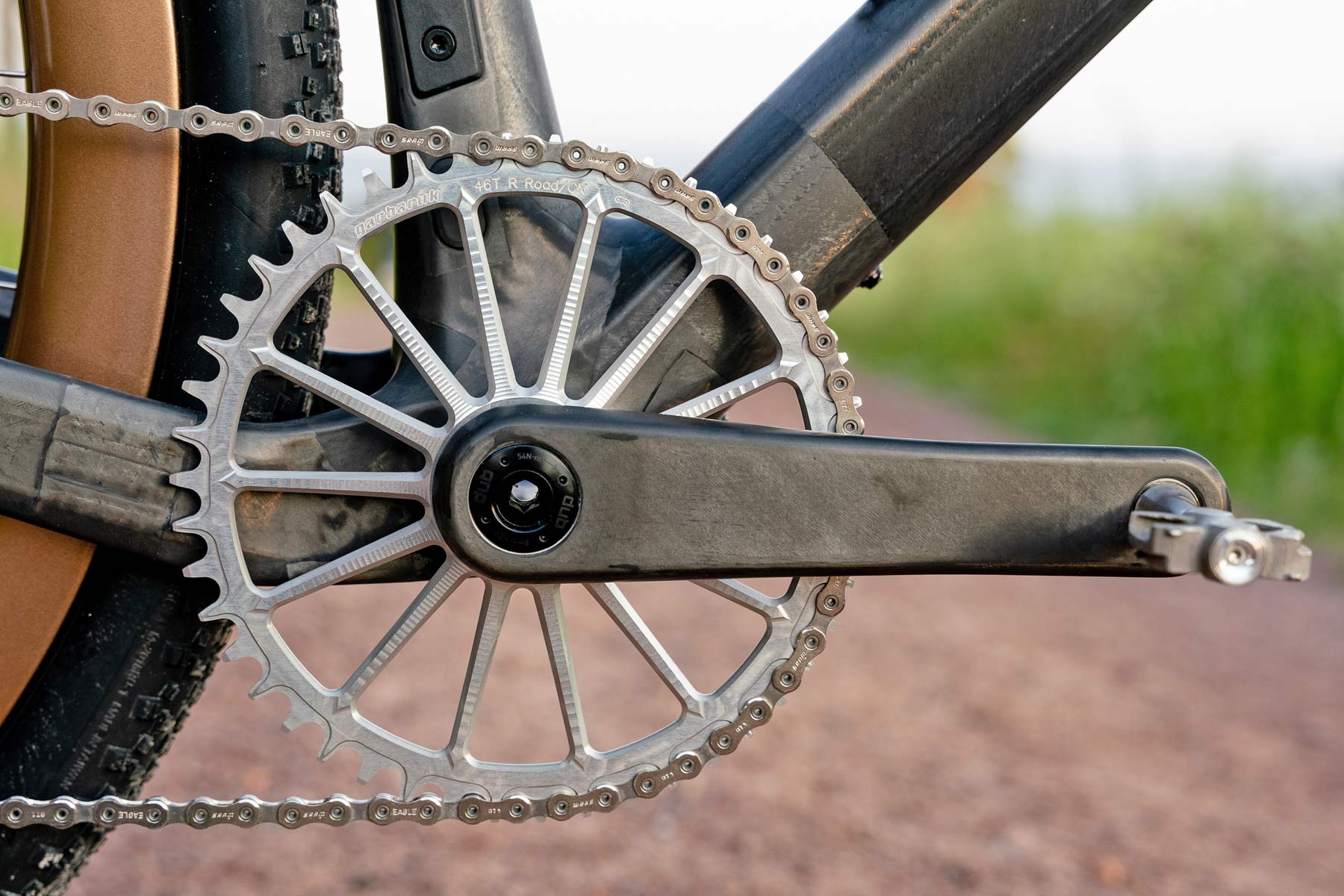 The drivetrain is a bit of a unique ultraligth mix, pairing a direct mount Garbaruk chainring on a SRAM Red DUB carbon crankset to a Rotor 12-speed cassette via a SRAM XO1 Eagle mountain bike chain. 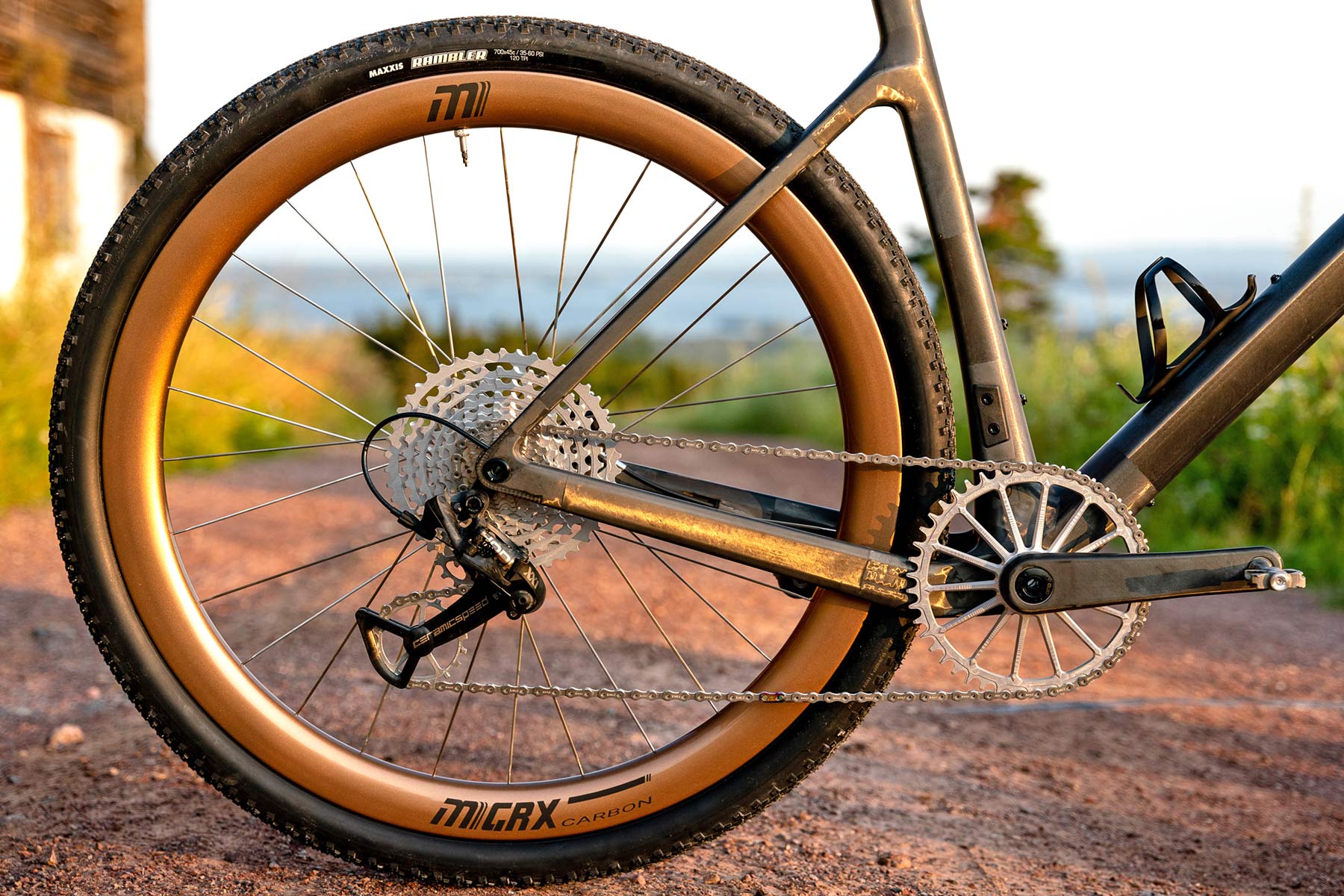 The whole makes for a trick-looking & wide mechanical 1x 12-speed drivetrain that works smoothly thanks to the Ratio conversion. It likely would even be cheaper than AXS if you’d leave CermicSpeed & Hopp out of the equation… 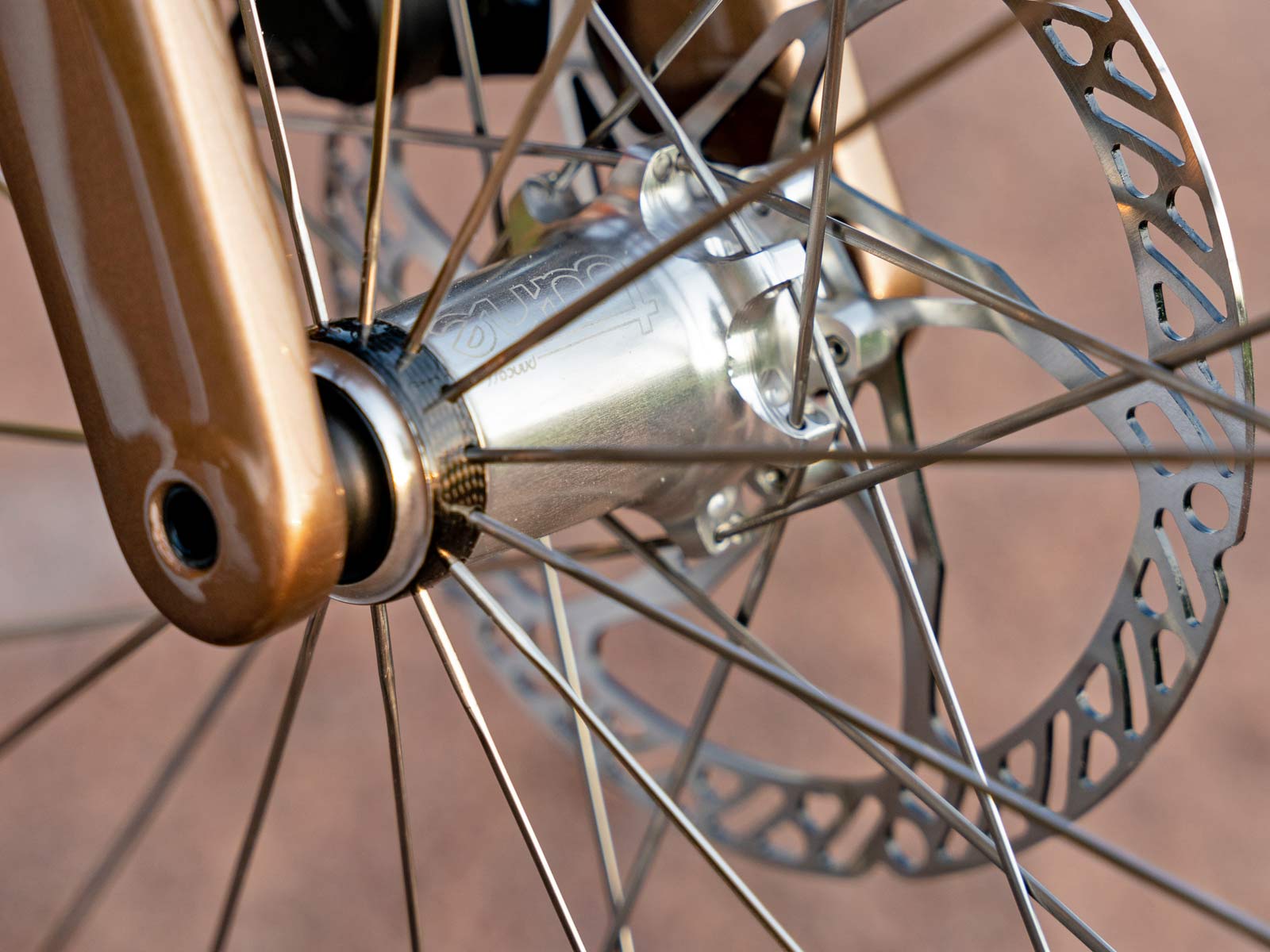 The complete build spec shows a bunch of ti bolts, a number of standard Syncros accessories, the Maxxis tires, and a special FASi shift cable kit. 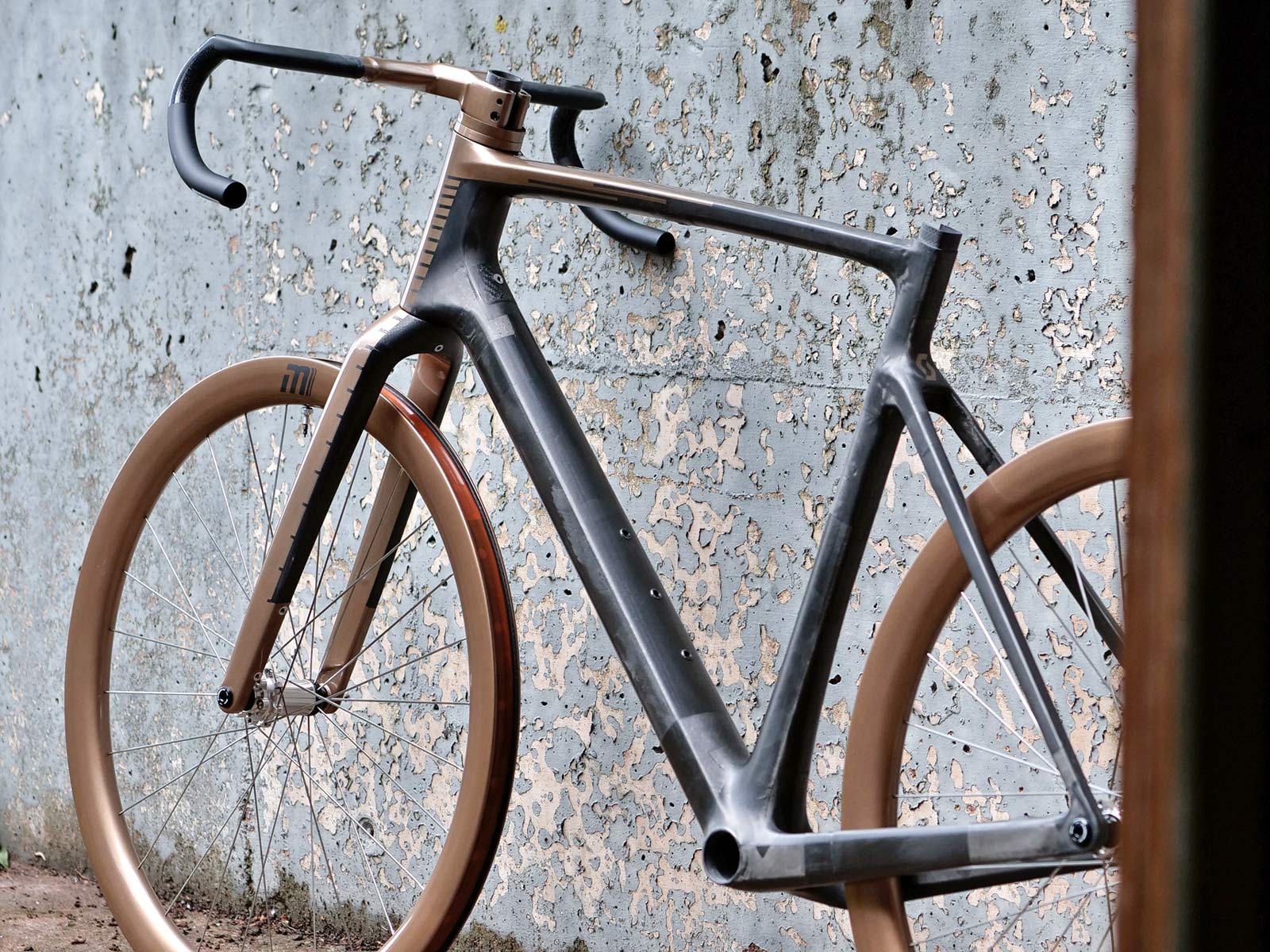 The entire bike was custom painted by hand by Gustav himself – a self-described amateur painter who’s “still learning”- finished in the same Zanzibar Brown metallic paint you might find on an old Volvo or a fancy modern Range Rover. While a nude, bare carbon finish is always lighter, he said that beautiful brown paint only added about 18-20g per rim, a penalty he was happy to accept in the name of shiny goodness. 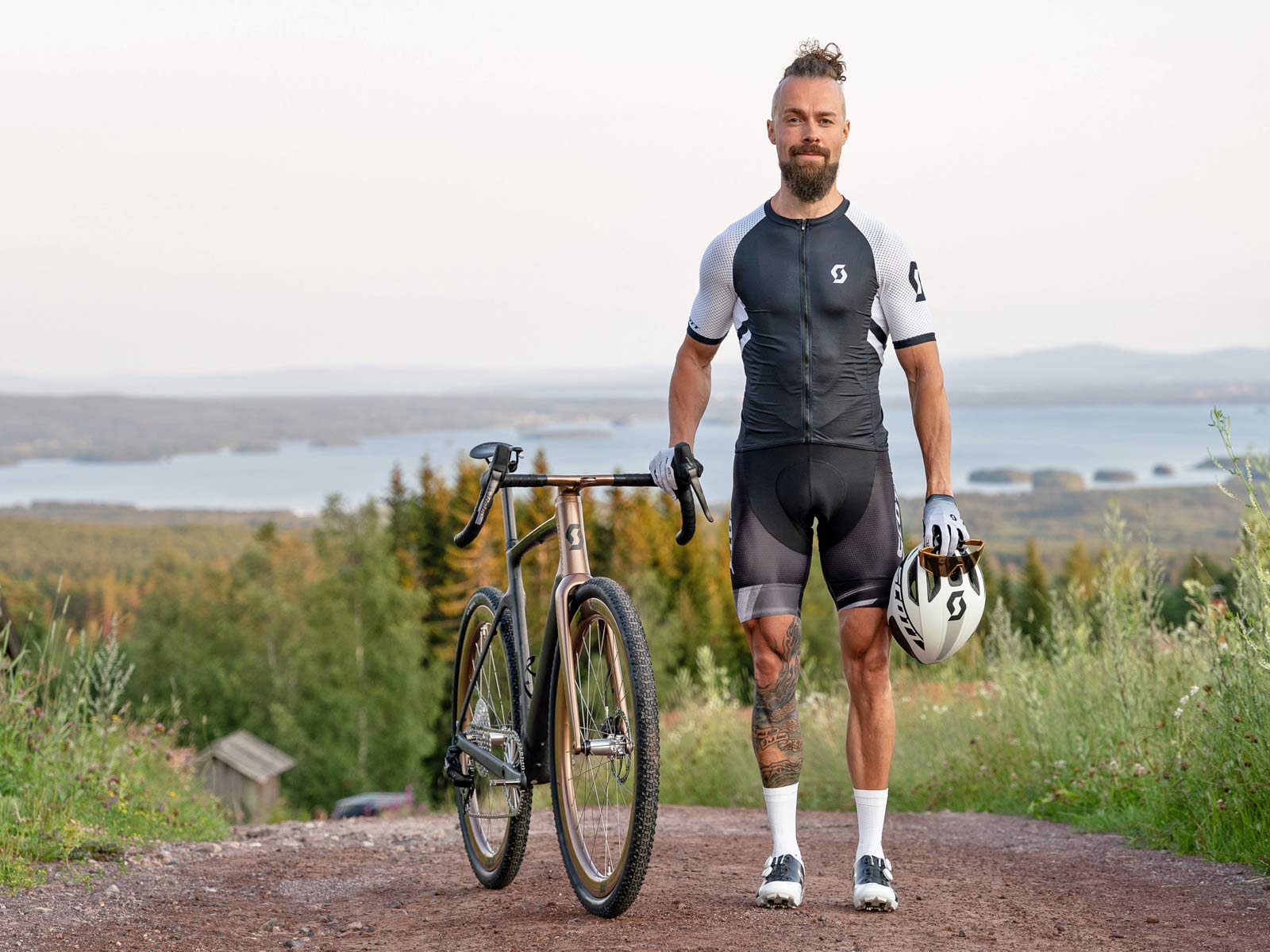 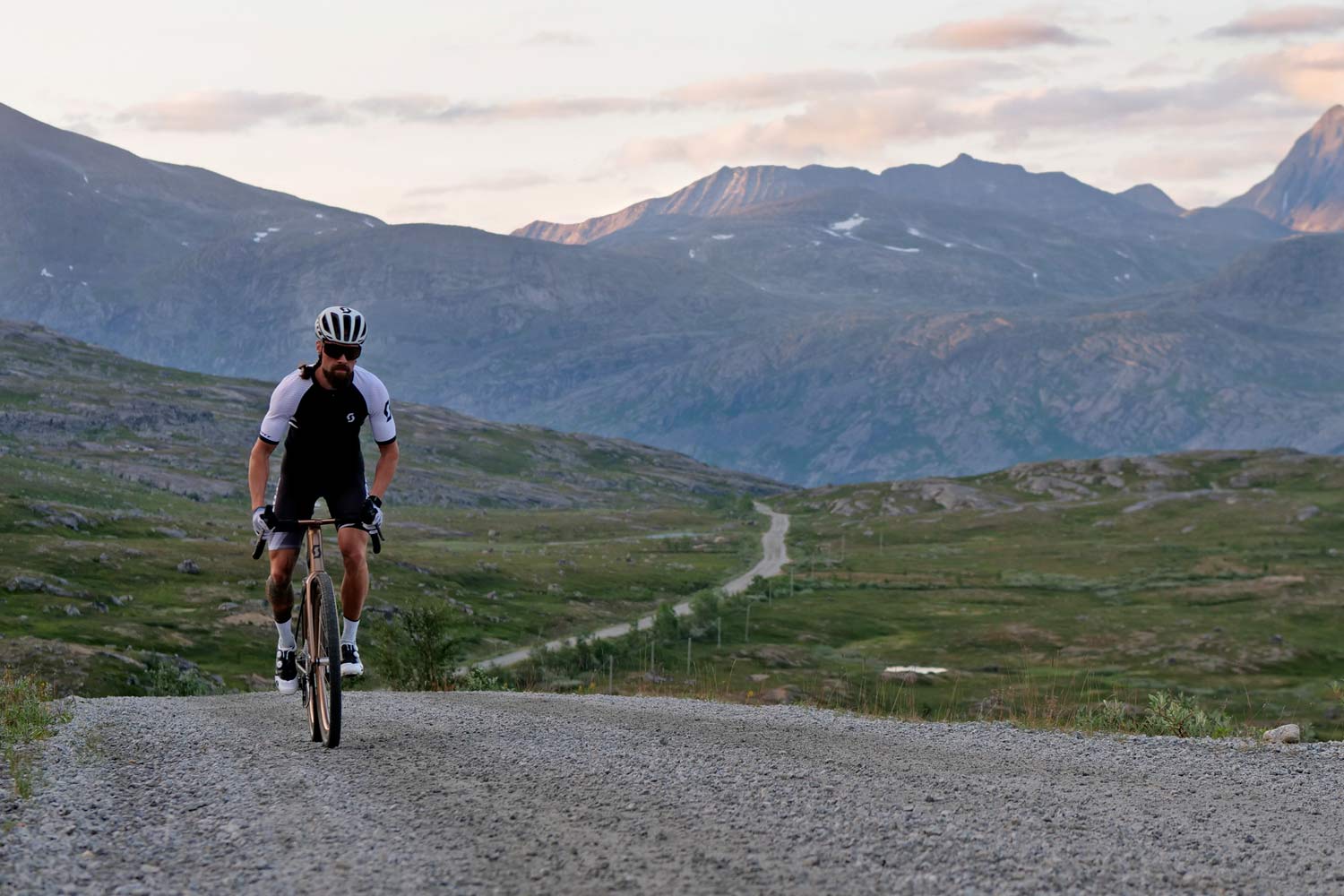 The question just remains, how loose will this technically-skilled mountain biker get on drop bars?

And what’s his super-custom, Dangerholm bikepacking setup going to look like? 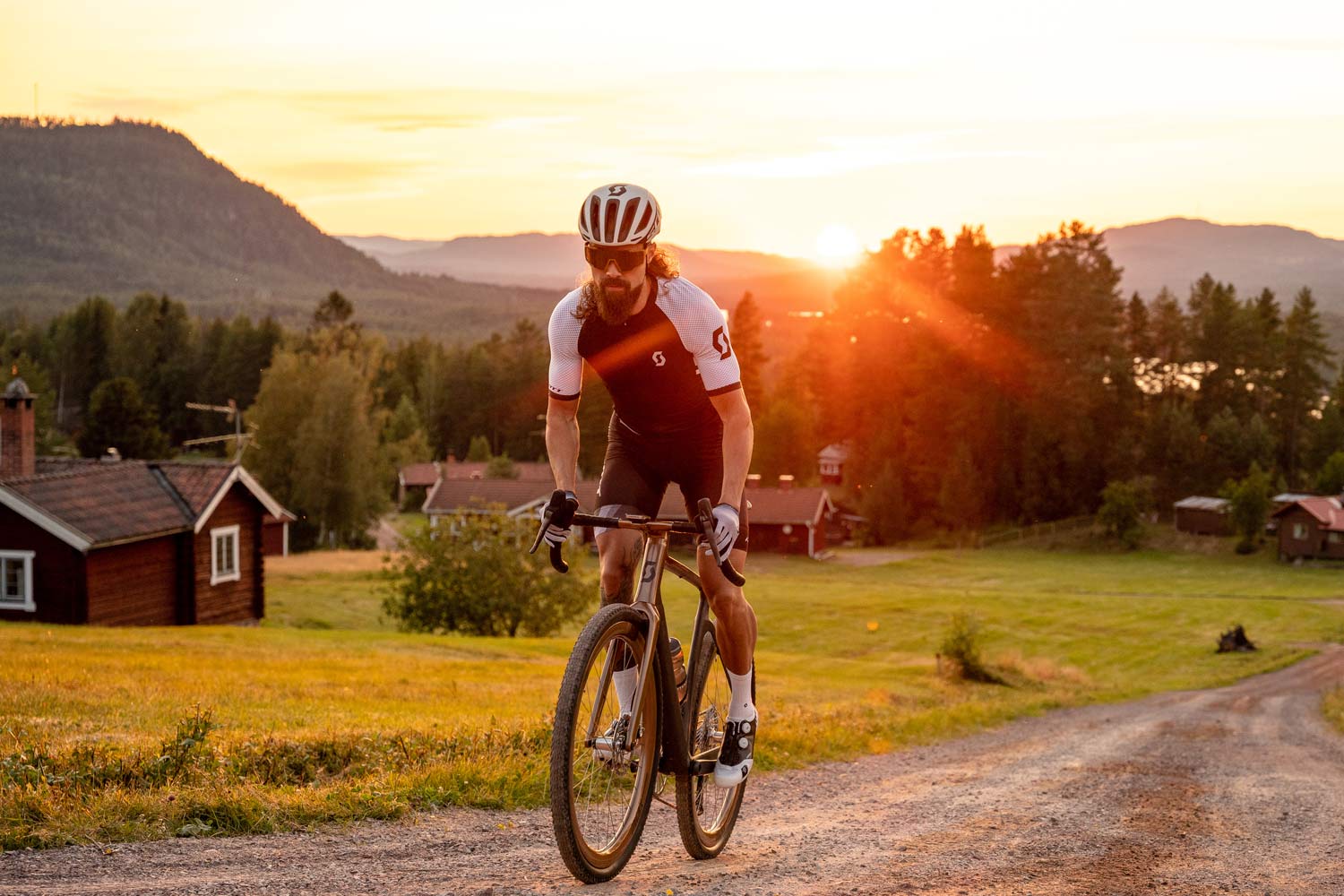 Shame about the Barbie jeansshorts and the guy in them, the bike looks pretty nice though.

Some of us appreciate the anatomy lesson 0% body fat gives.

Shame about you coming here to judge the physical appearance of the rider instead of the bike he created.

I am in awe of both the bike and his physique.

@Jaap it’s a tongue in cheek joke get over it!

How about the word shame be stricken from our vernacular?

He has a real skill – for making custom bikes that manage to have less appeal than the stock products they’re based on, while being 3x the cost. I guess as marketing point they work, cos here I am talking about it..

Just lose some of that arm muscle, cheaper than all that carbon!